After about a year and a half of operation, Birdsong remains my favourite restaurant in San Francisco proper. I’ve written here about two past meals, but I think this evening was my sixth visit since June 2018 (eh, who’s counting?). Tonight, I returned with a friend and we were served a hearty menu that was a perfect fit for the winter weather. 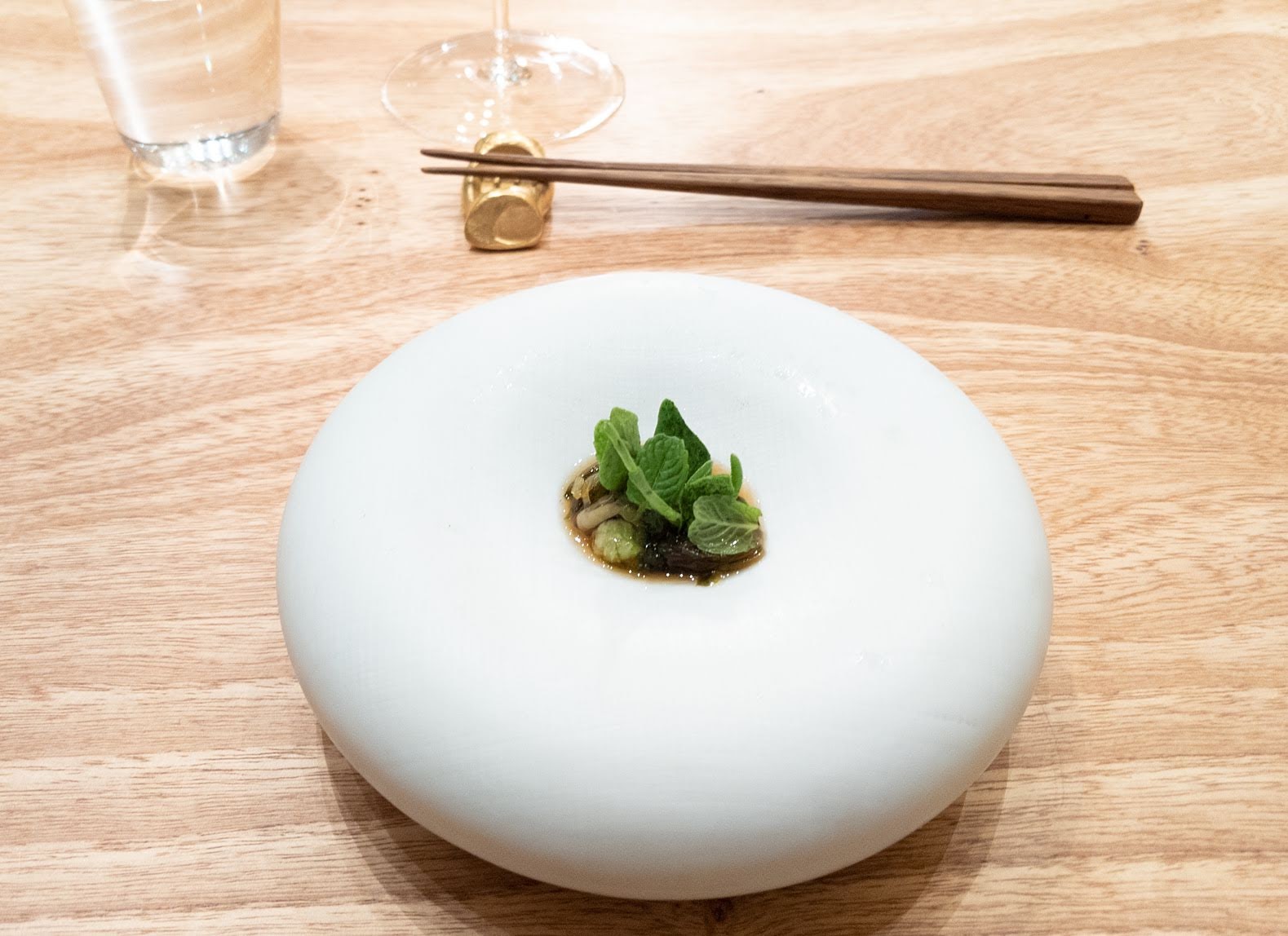 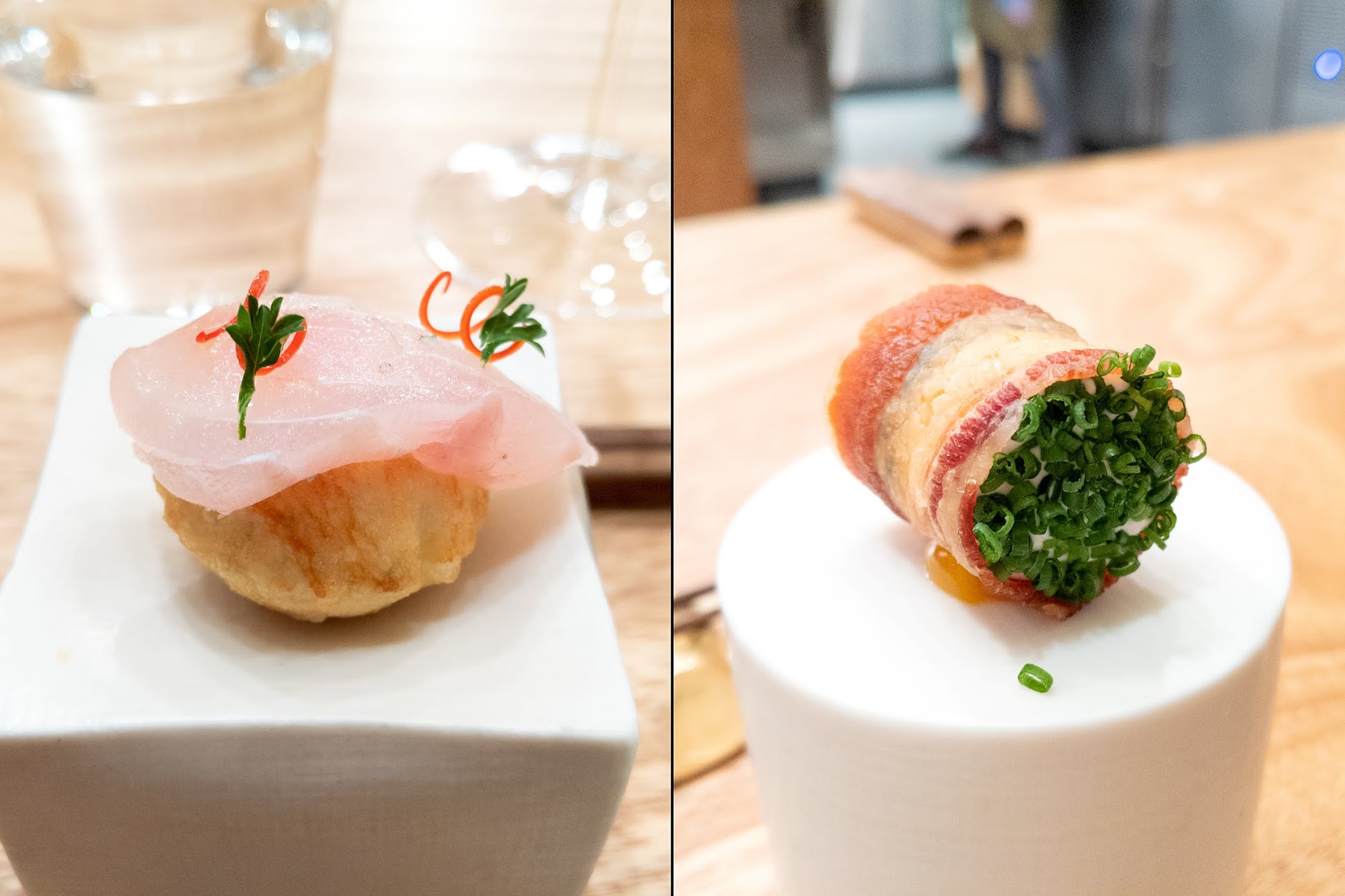 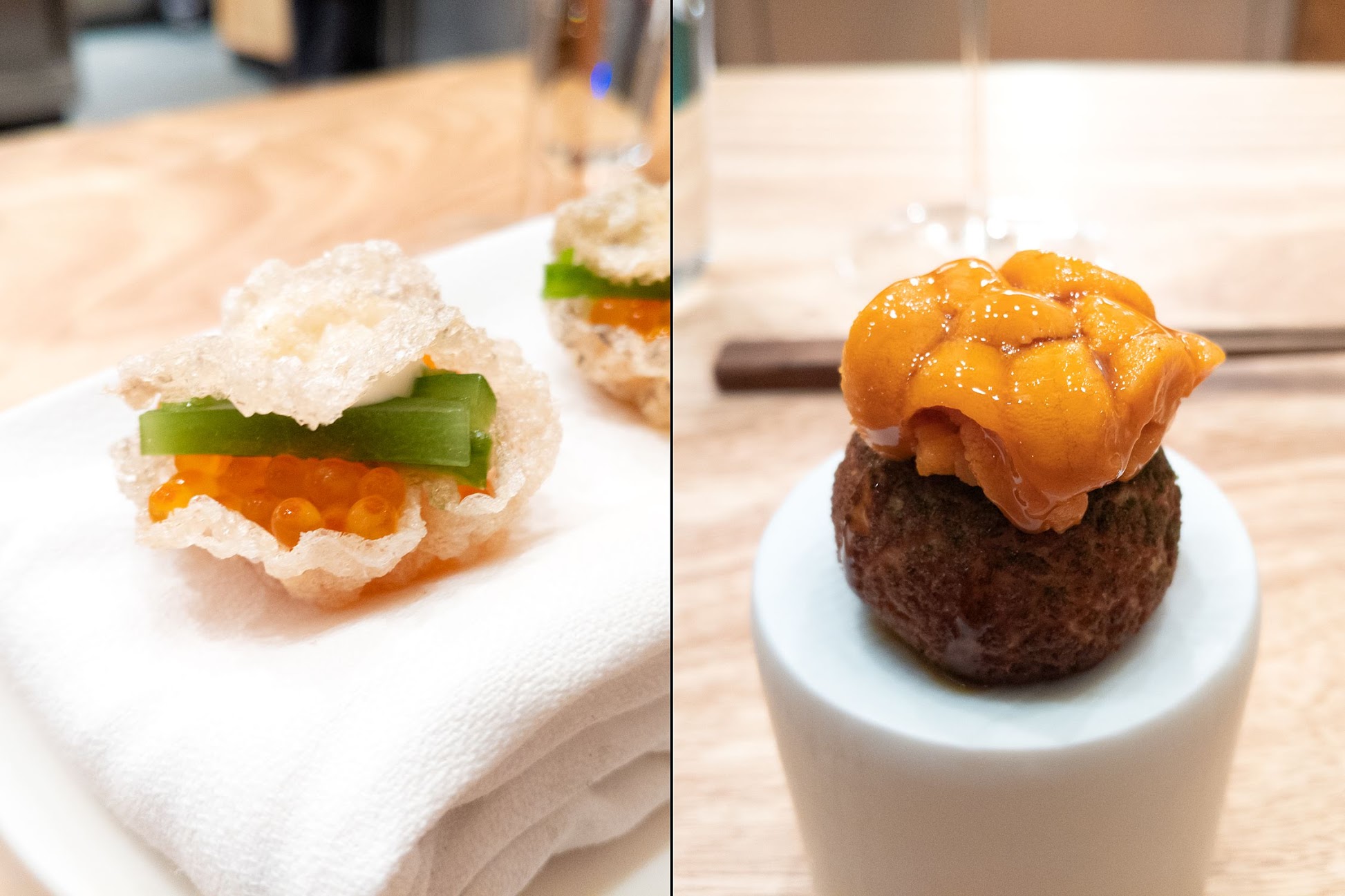 Trout skin sandwich, smoked roe, horseradish
Uni cream puff, caramelized white miso hollandaise
The opening sequence of bites has been pretty consistent (and consistently strong) across my visits. This time, the sea urchin from Hokkaido really shone and made for a standout bite, with the vinegared seaweeds a close second. 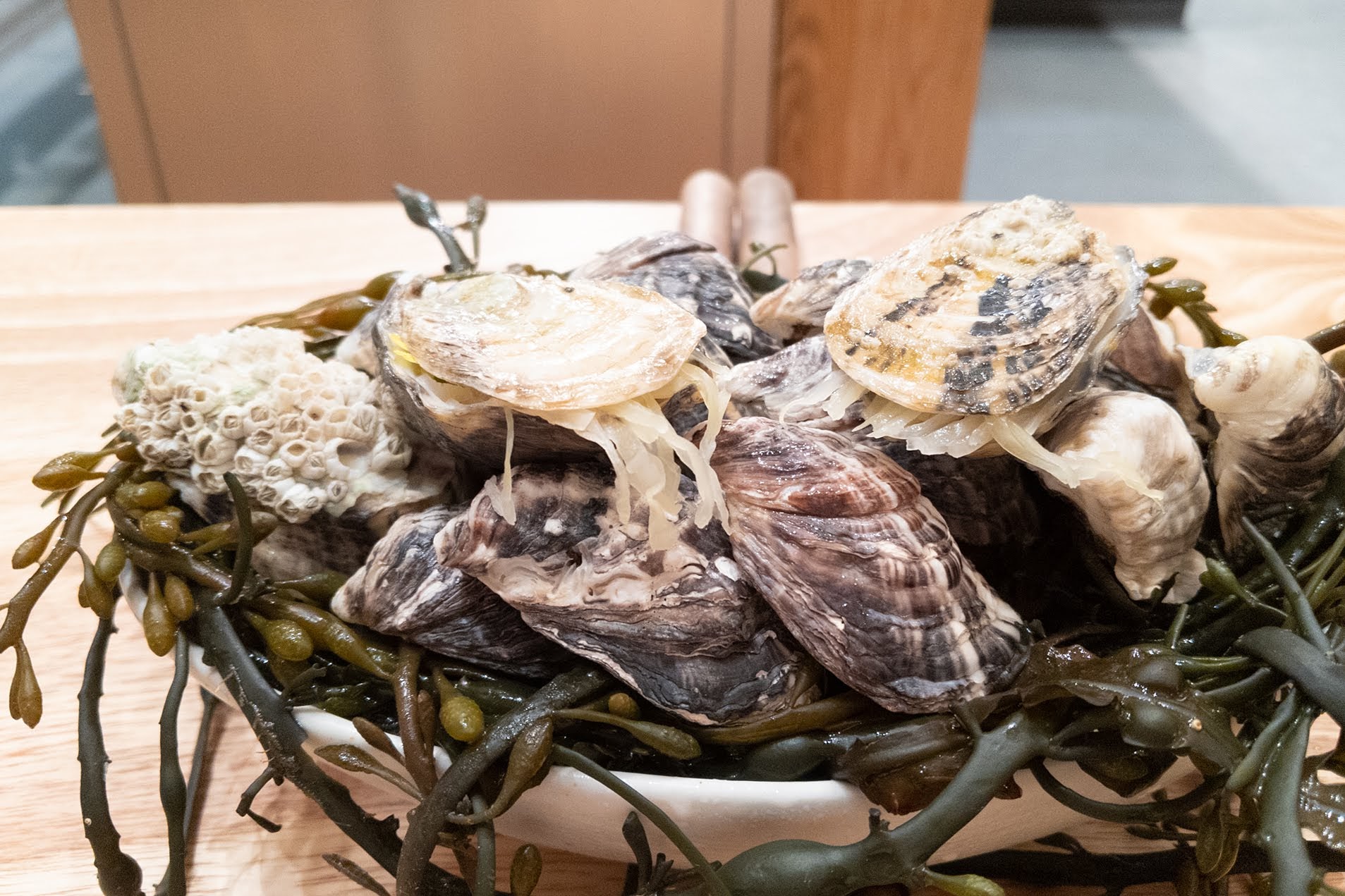 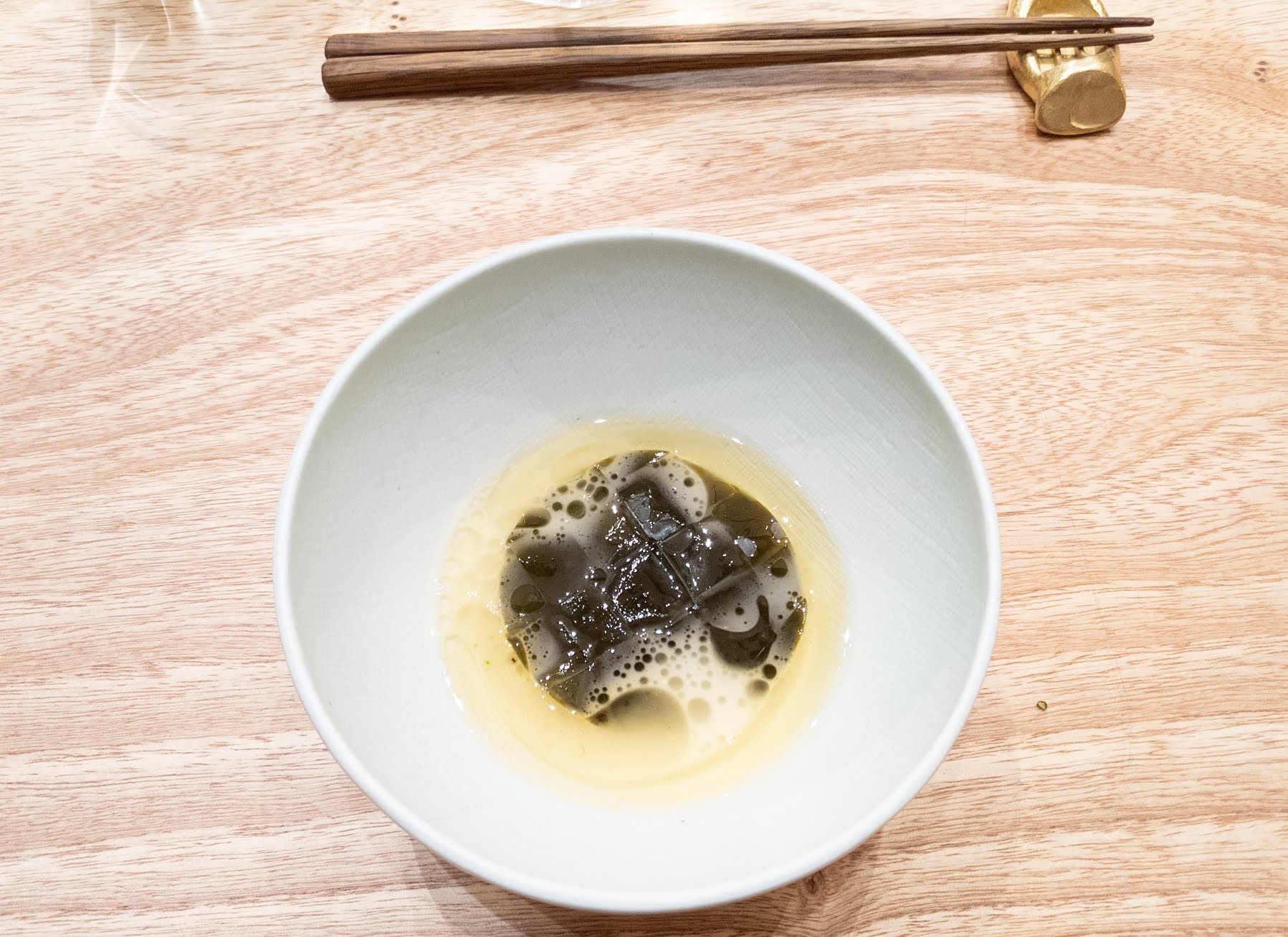 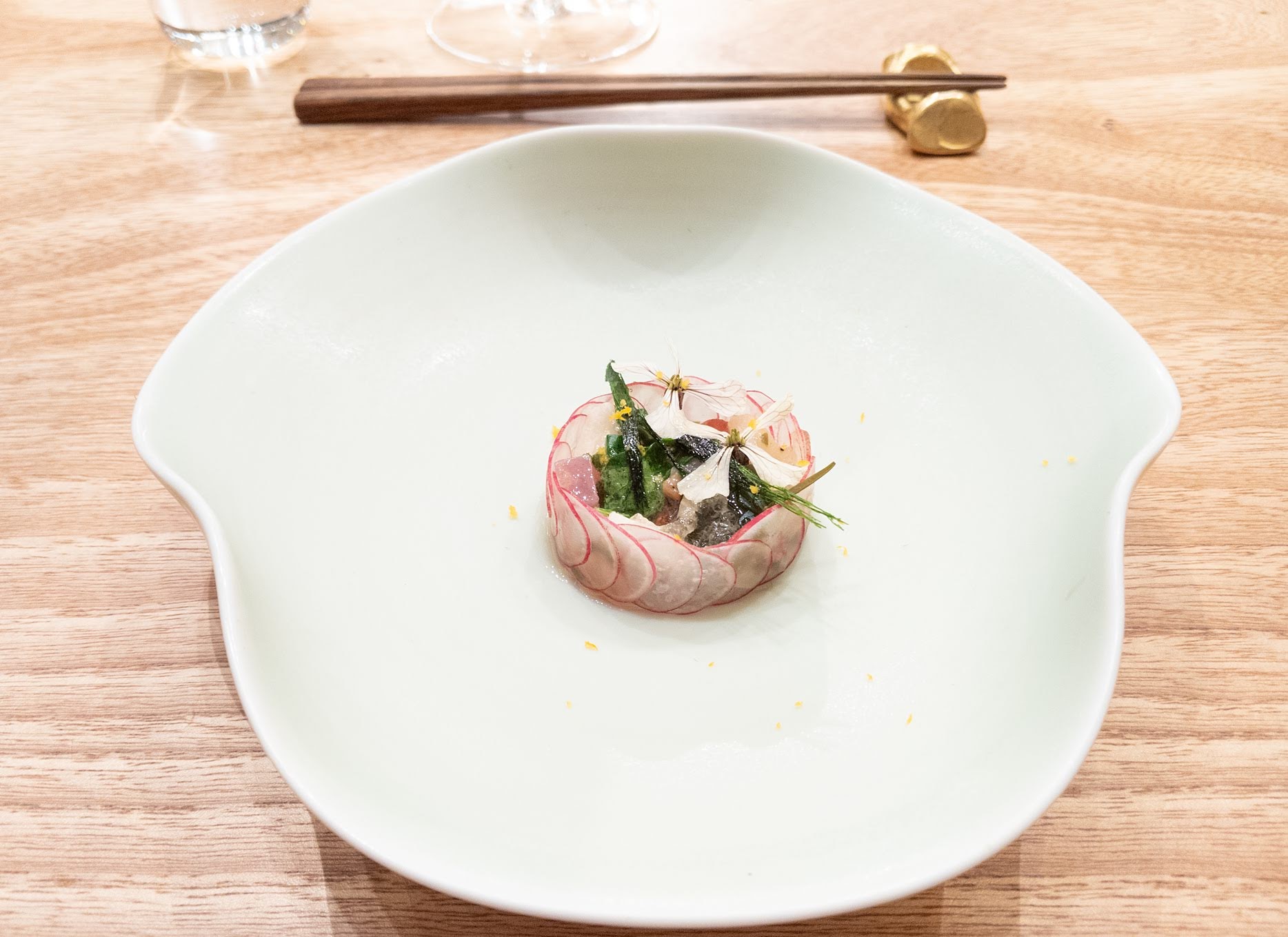 Aged roots and radishes, cultured butter
The first proper course was served in two parts. First, various preparations of the roots and radishes were served under a tender lattice of soy-braised wakame, with a buttery daikon broth poured tableside. This was followed by a salad of the same vegetables, drizzled with warm cultured butter. The intensity of flavours in both were pretty heady, and every aspect was well-calibrated (an extra-special nod to the root vinegar gelée in the salad). My dish(es) of the evening. 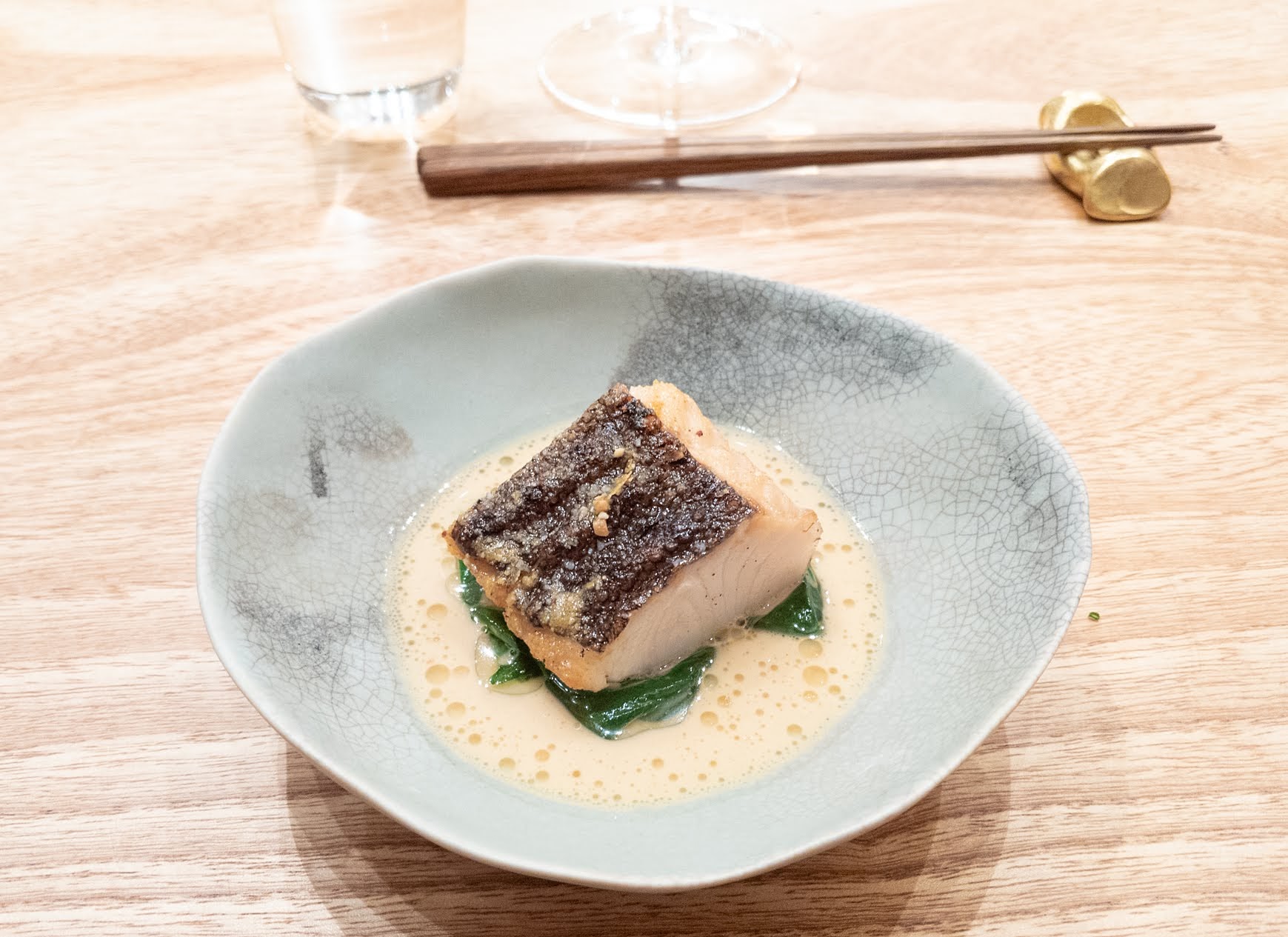 Black cod, sunflower seed fat, spinach
Cooked over embers, the fish had a beautiful smoky quality and was perfectly done. The mouthfeel of the emulsified sauce was ridiculous – we were encouraged to drink from the bowl directly, and we did it with gusto. 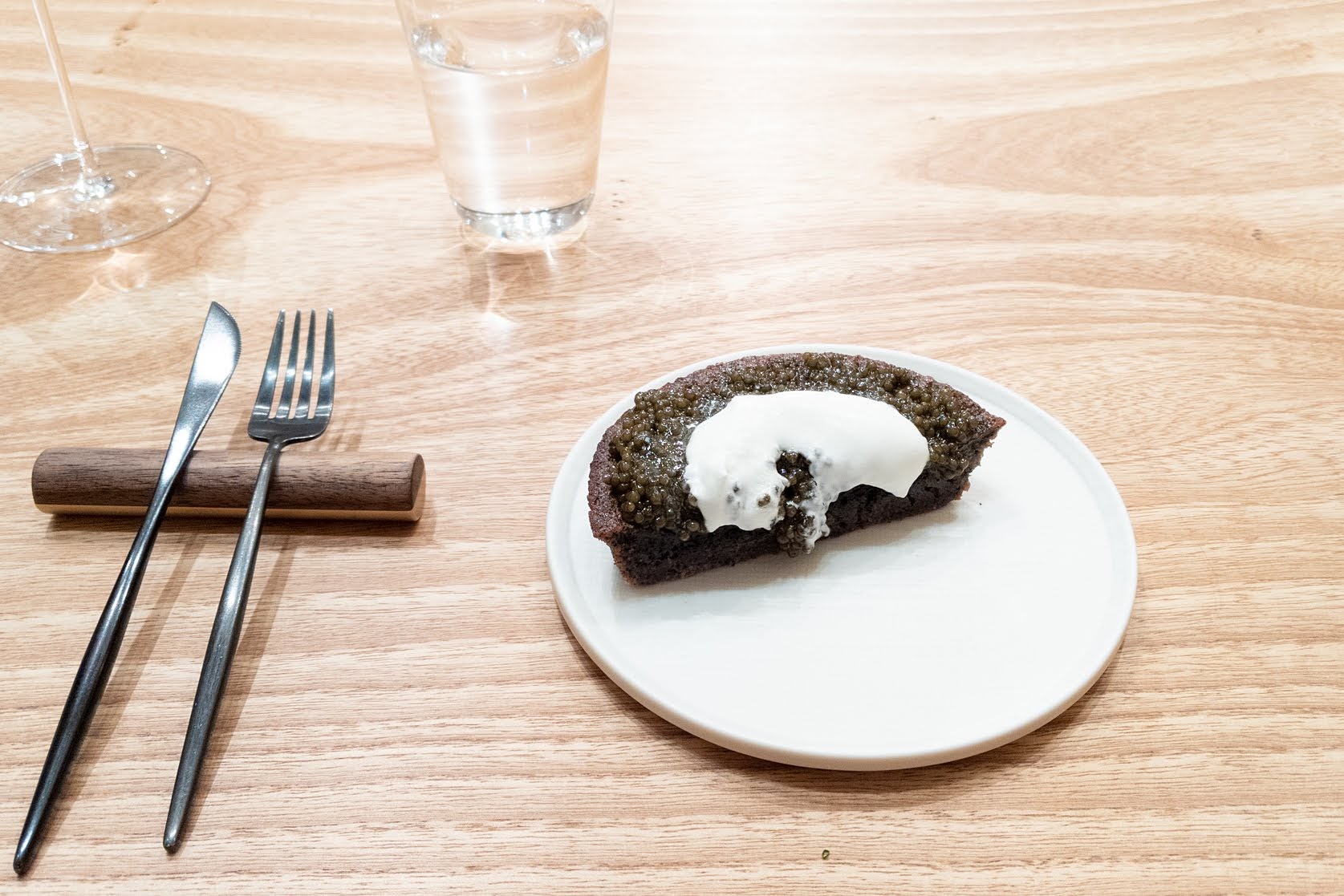 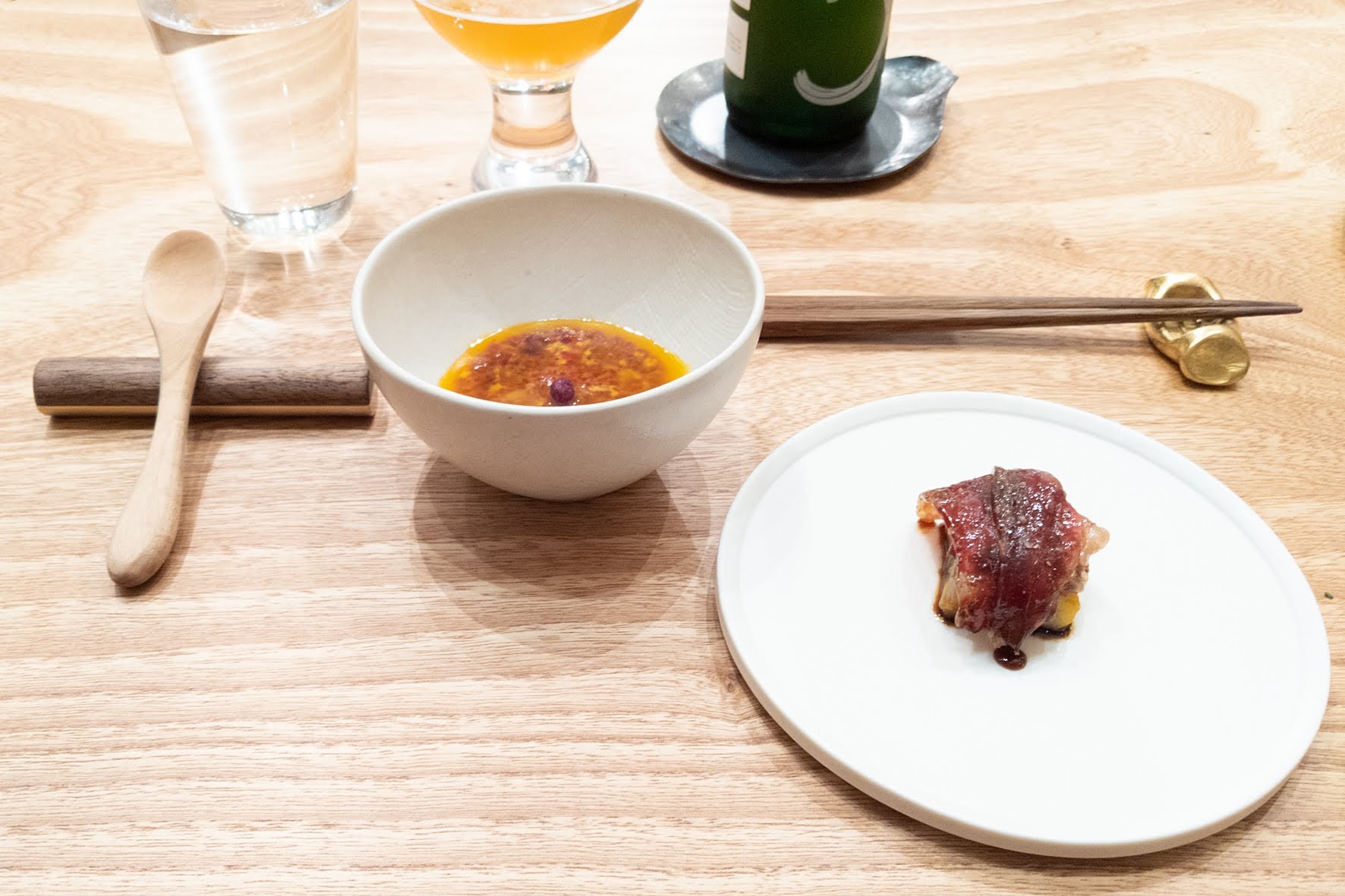 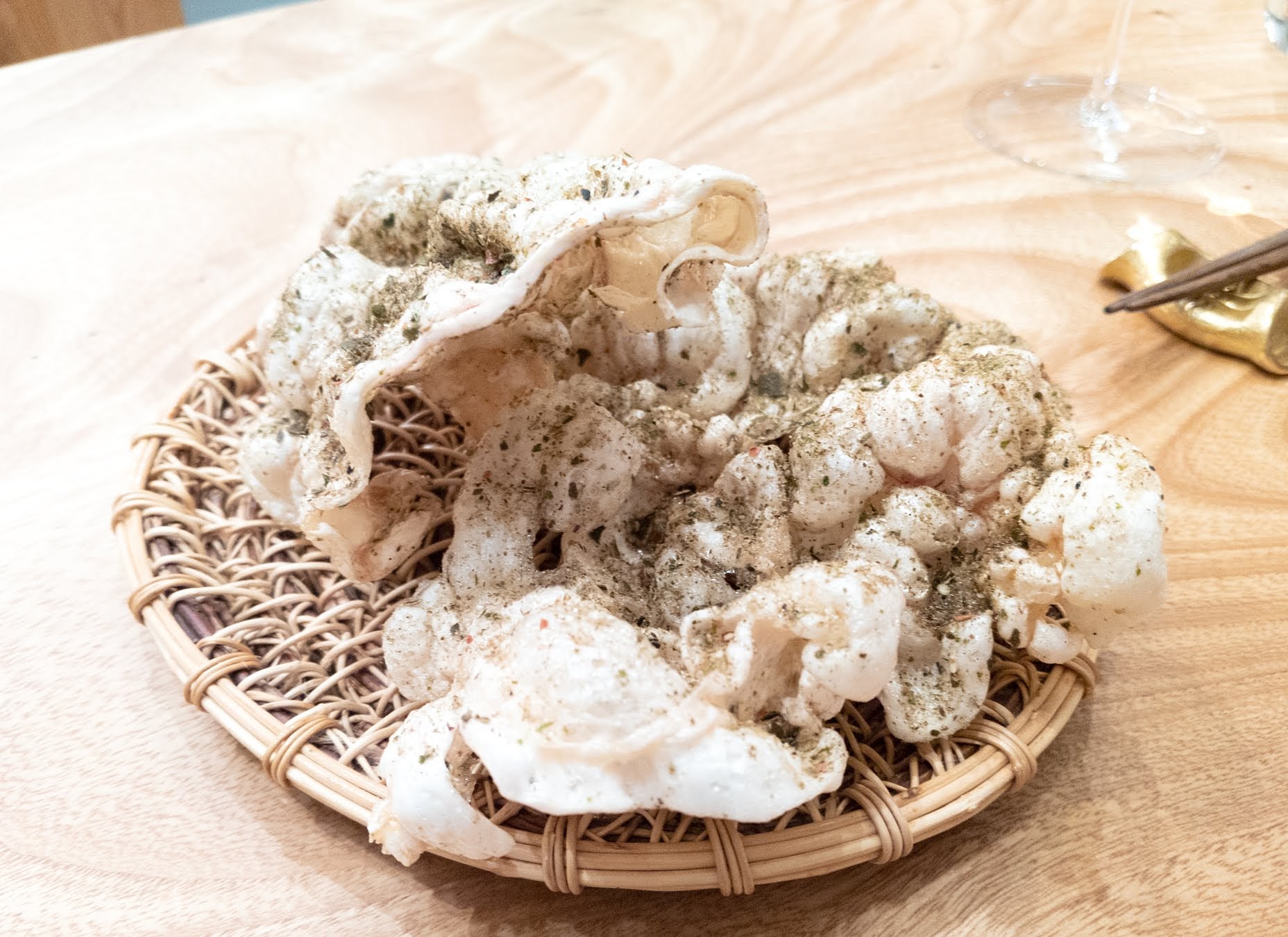 200-day dry-aged beef
Strip loin, trimmings and puffed tendon
Another two-part sequence, this time featuring the same beef I had eaten at 100 days of aging during my last visit a few months ago. Tonight, slices of hay-smoked strip loin were laid over charred eggplant and peppers, and glazed with sweetened soy sauce infused with the beef bones and fat. A second preparation was raw beef trim in a bowl, mixed with confit tomatoes and spruce. Finally, crispy beef tendon with a house-made furikake-esque seasoning – we made use of these as vessels for the tartare. I love the thought that went into this, and the totality made it a close second to the radish course. 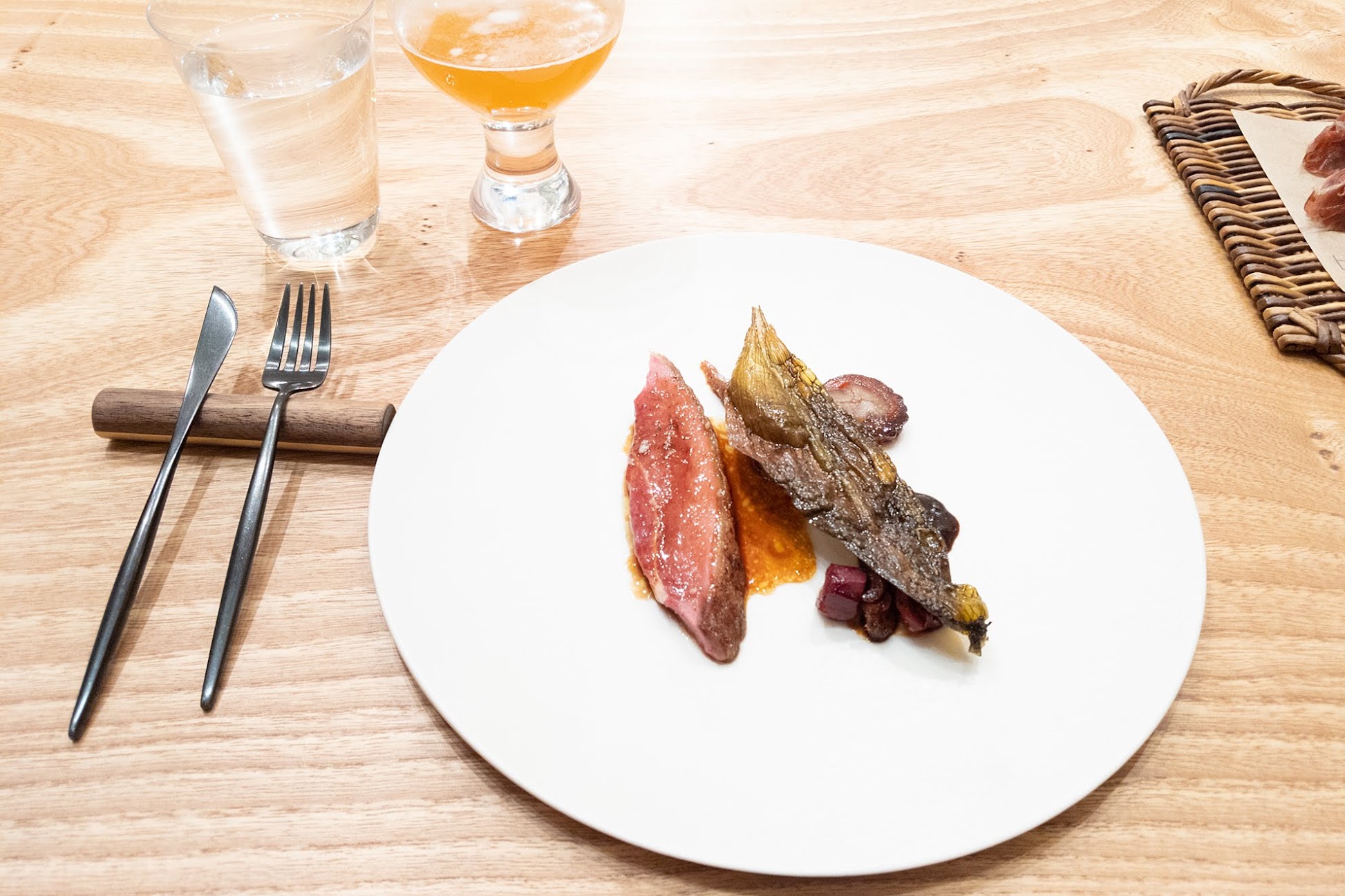 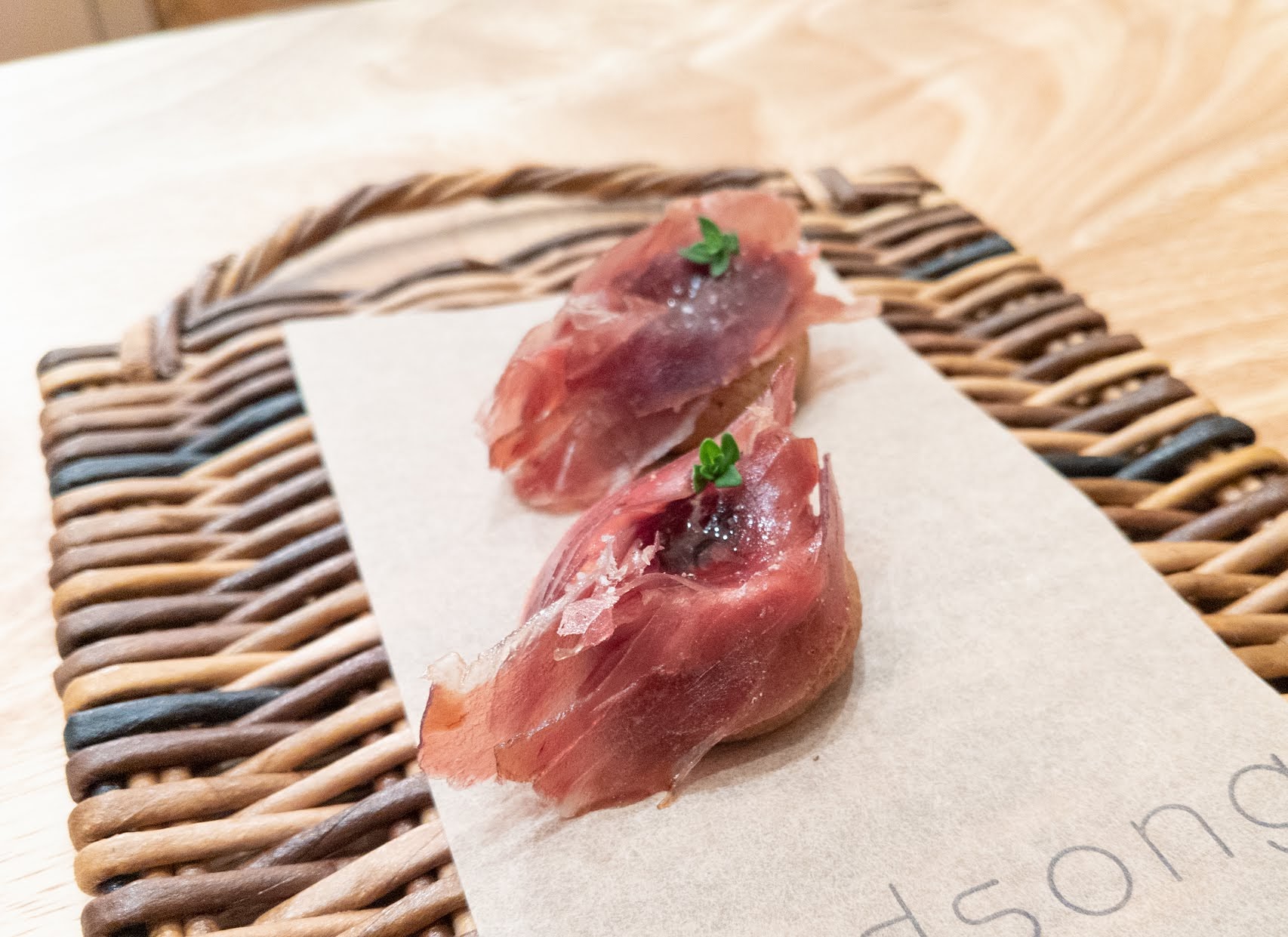 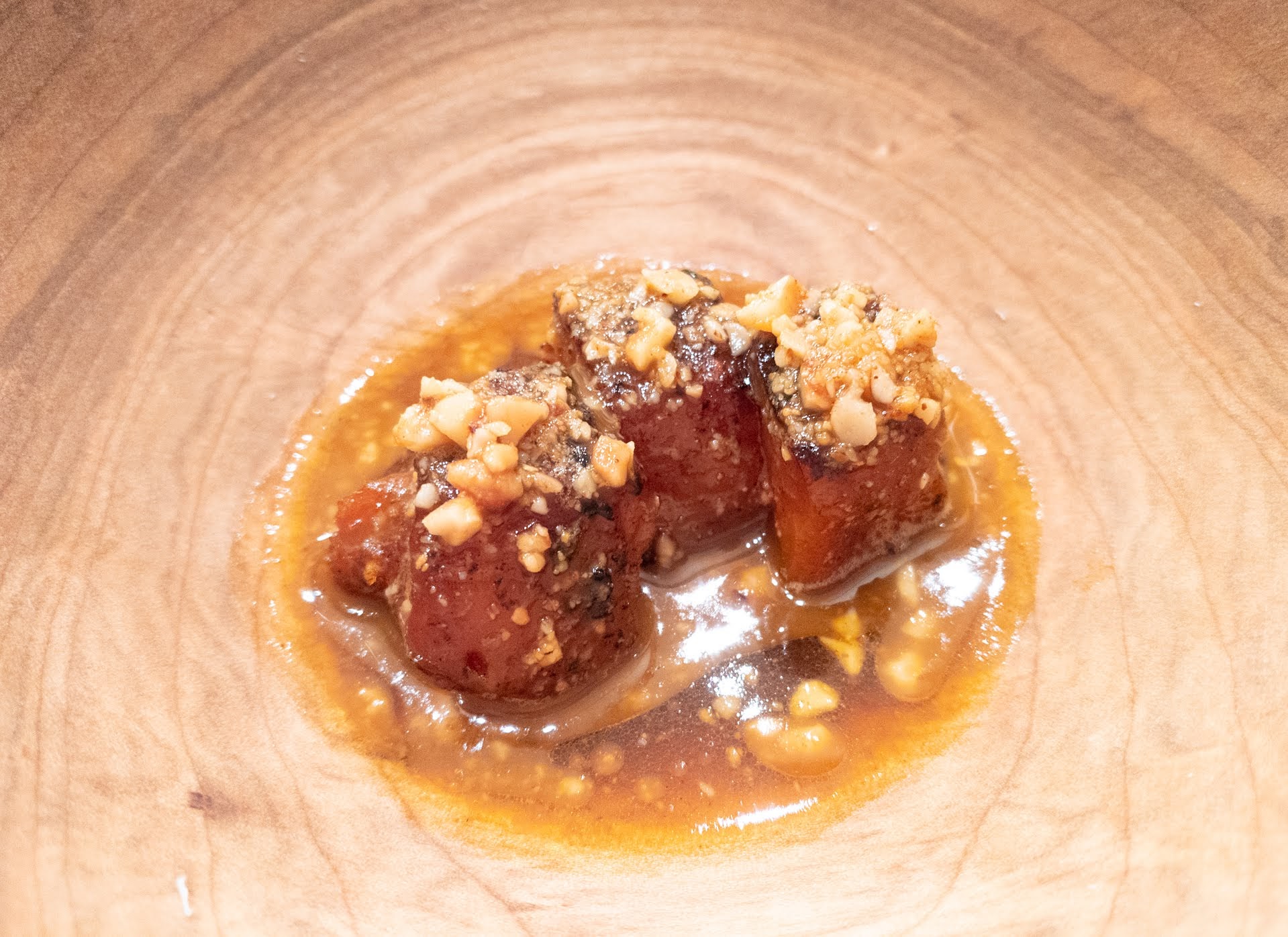 Butternut squash
Butter, walnuts, hazelnuts, almonds
I didn’t do this course justice with my poor photo. The squash had a wonderful chewy texture, presumably from partial drying. The toasted nuts worked rather well to offset the sweetness of the squash, and contributed to the overall earthiness of the dish. 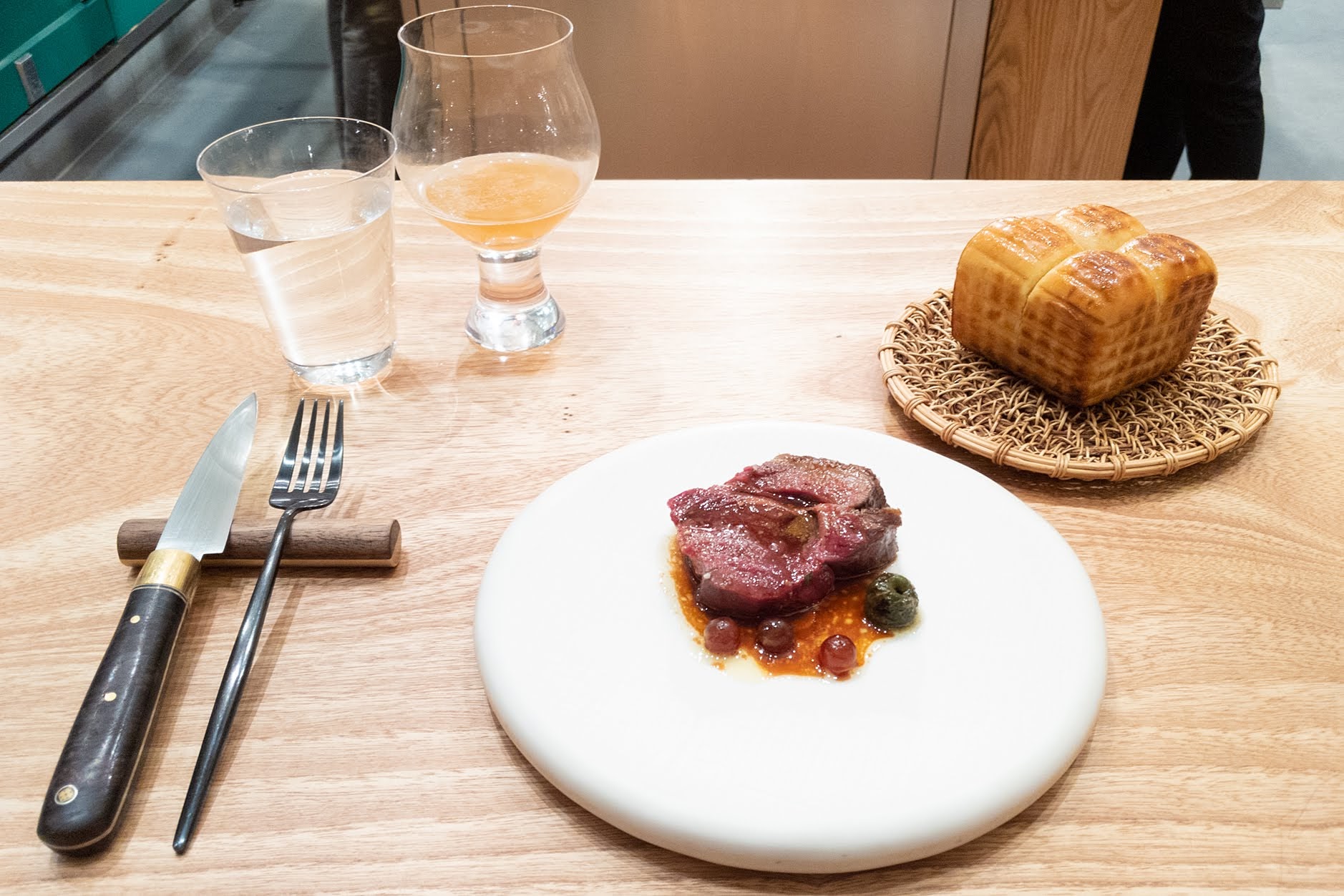 50-day aged Axis deer
Juniper, spruce, olives, dates
Even after cooking, the deer was an alluring shade of deep vermillion. The (surprisingly) tender meat had amazing flavour, but I imagine it could easily age for another 50 days to draw out even more! It was presented with a side of the city’s best Parker House rolls – just perfect for sopping up the jus. 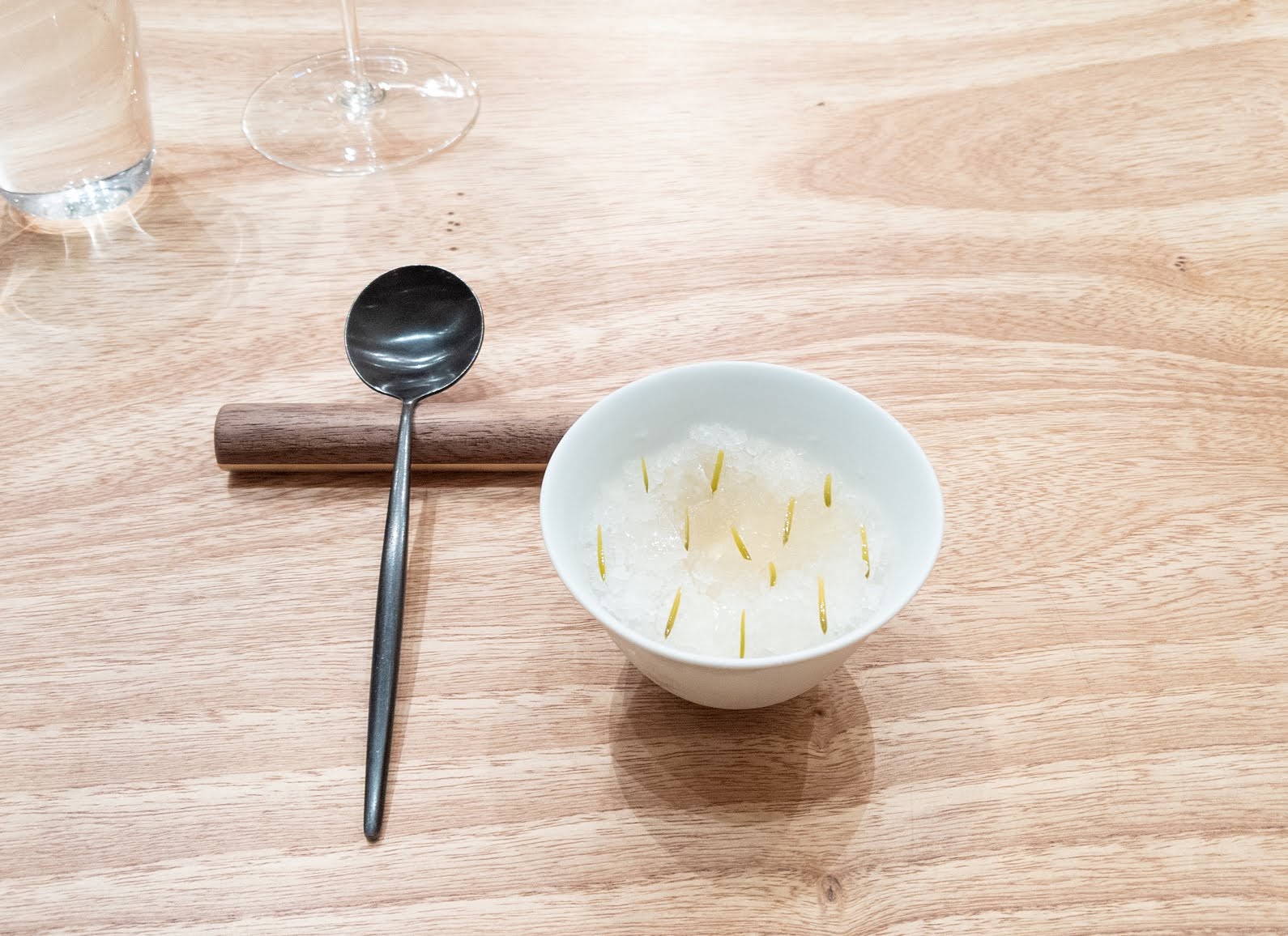 Pine ice, lime curd
Candied etrog, spruce, chartreuse syrup
The only place I’ve seen etrog used with any frequency is at Coi, so it was a surprise encountering it here. This was fantastic after the gauntlet of rich, savory courses – the ice was finely textured, and it topped a frozen whipped lime curd that was very refreshing. I also quite enjoyed the herbal notes from the spruce and syrup. 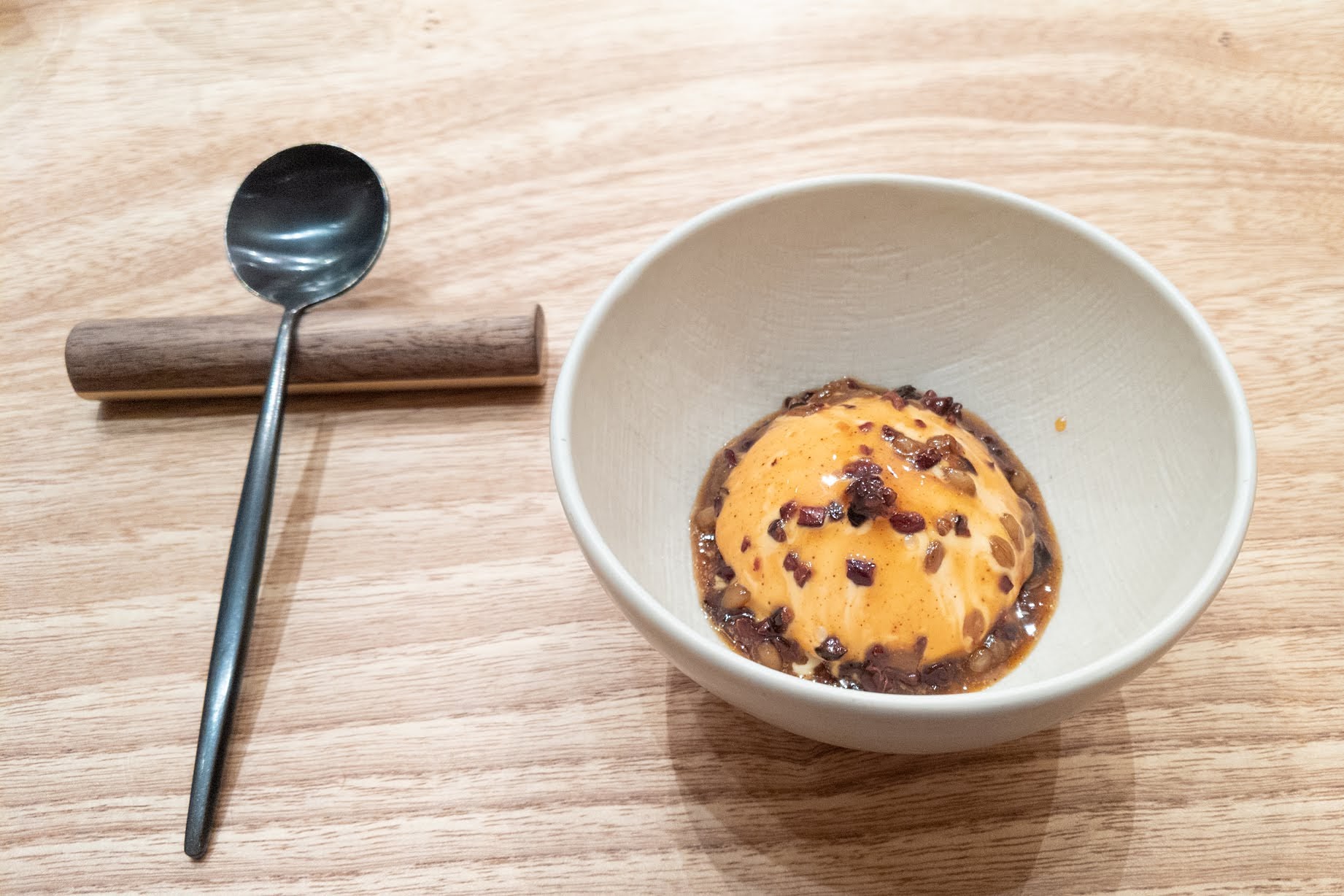 Chris Bleidorn and his team are doing fantastic things with the restaurant – some of the dishes seem so simple in appearance, which completely belies the effort put into them.  Although the food here is on the rich side, I somehow never feel overwhelmed – that’s magic right there. I stand by my feeling that two stars are in the offing for Birdsong, and I’m already plotting my next meal here.