I love the diversity of dining options in London, but it certainly makes picking restaurants hard when you’re in town for less than 48 hours. After a fun, casual dinner the previous night at Dishoom (we need places like this back home), I went for bust and planned two dinners for our final evening in the city. We started with an early meal at ROVI, followed by an interlude at our hotel. And then, I ventured out alone for a 9 pm reservation at The Clove Club.

An acquaintance described the restaurant as “hipster”, but I don’t really see it… perhaps living in San Francisco has made me immune. Being a scientist, however, I have a real soft spot for chefs who really geek out on food – by many accounts, Isaac McHale is one of them. Being solo, I was seated at the bar counter, which was quite a comfortable perch from which to enjoy the evening’s tasting menu. 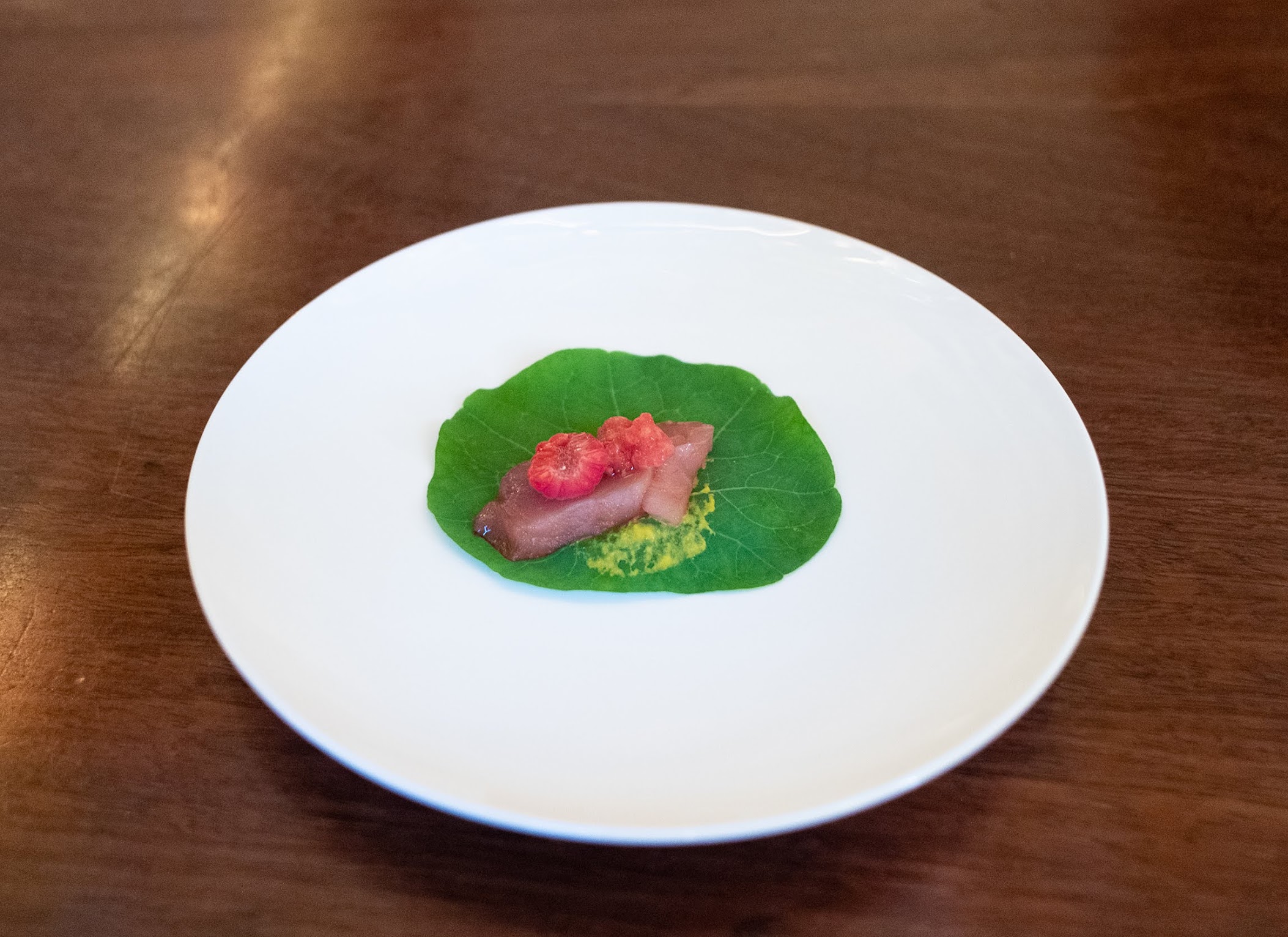 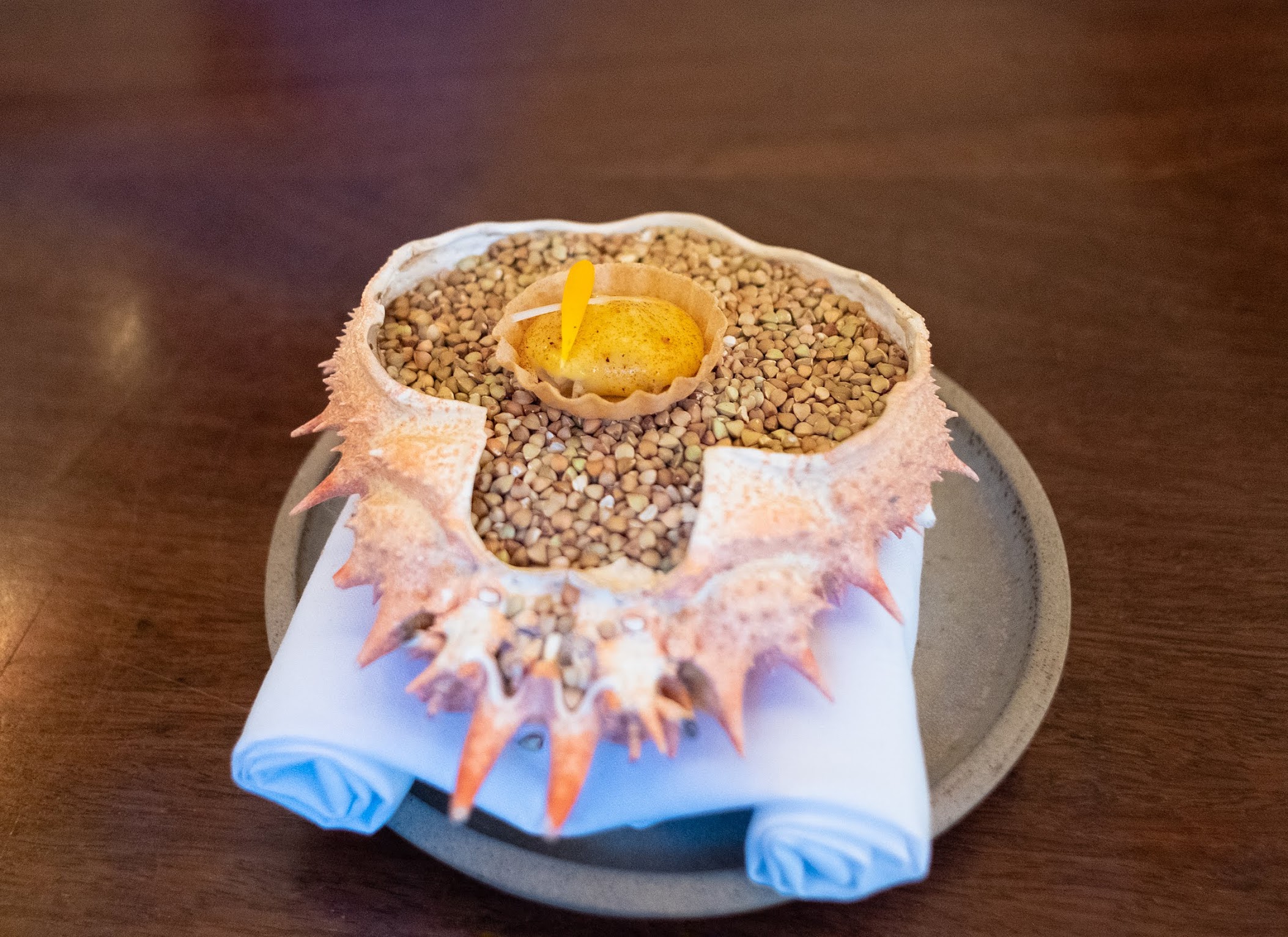 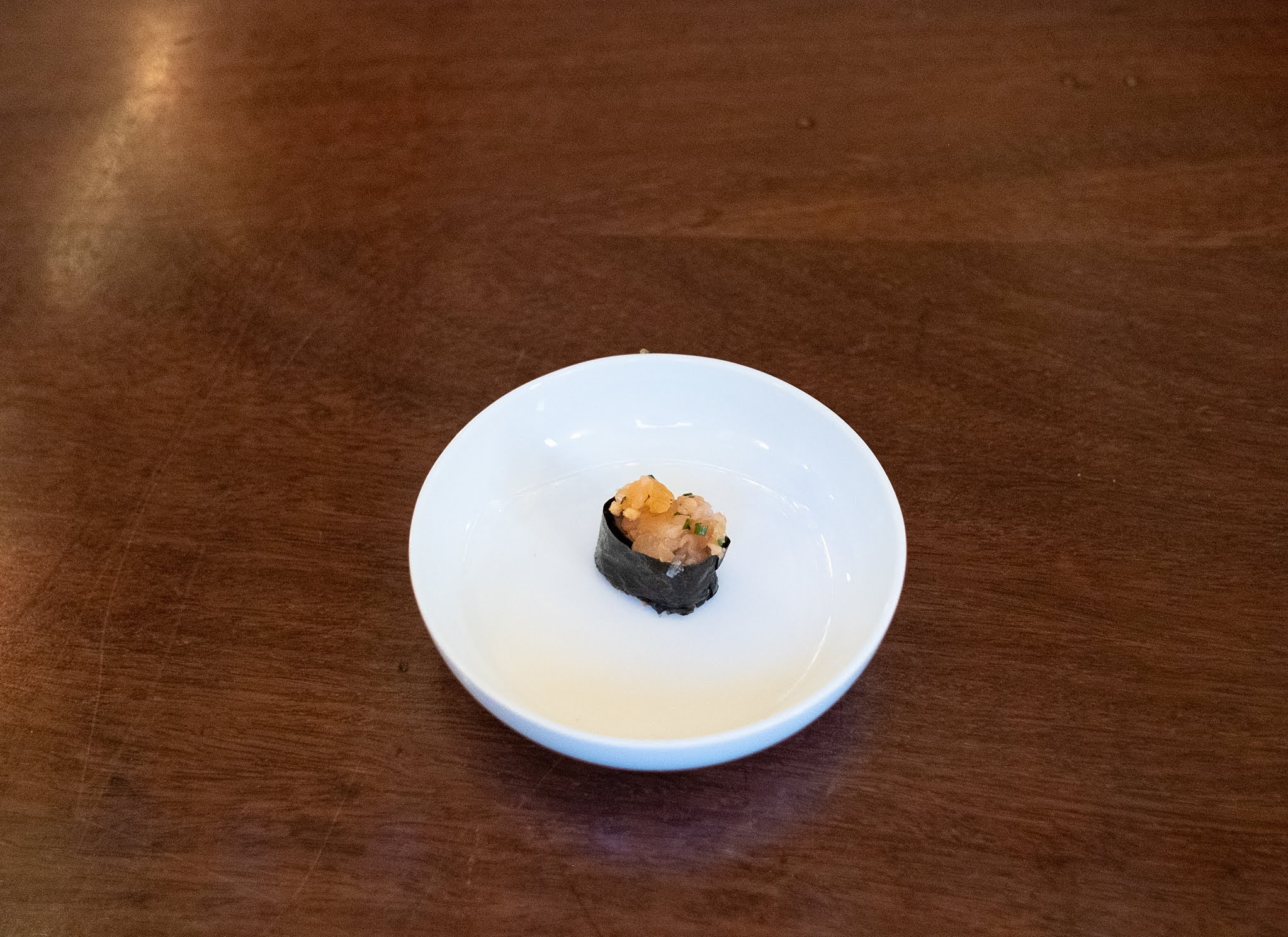 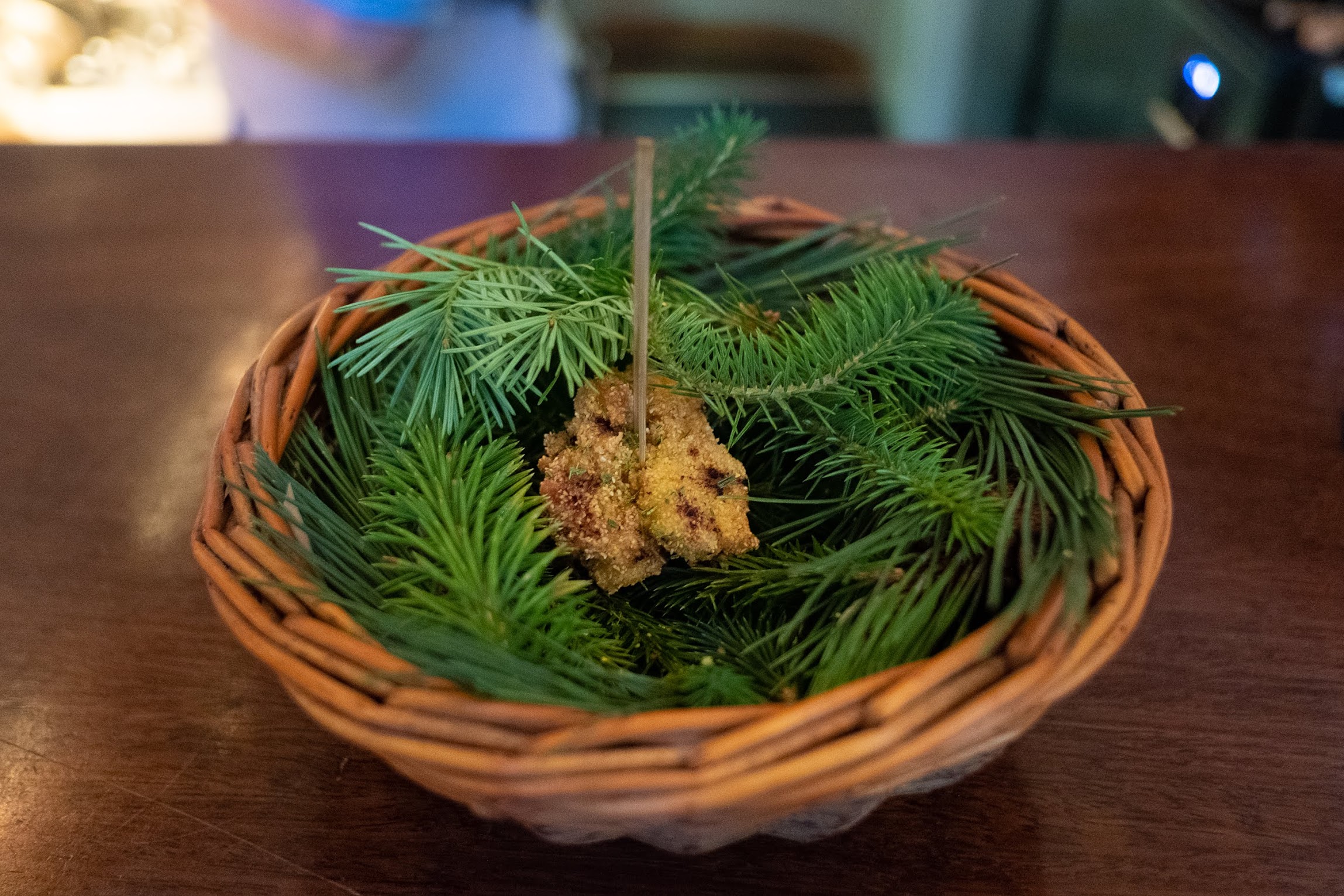 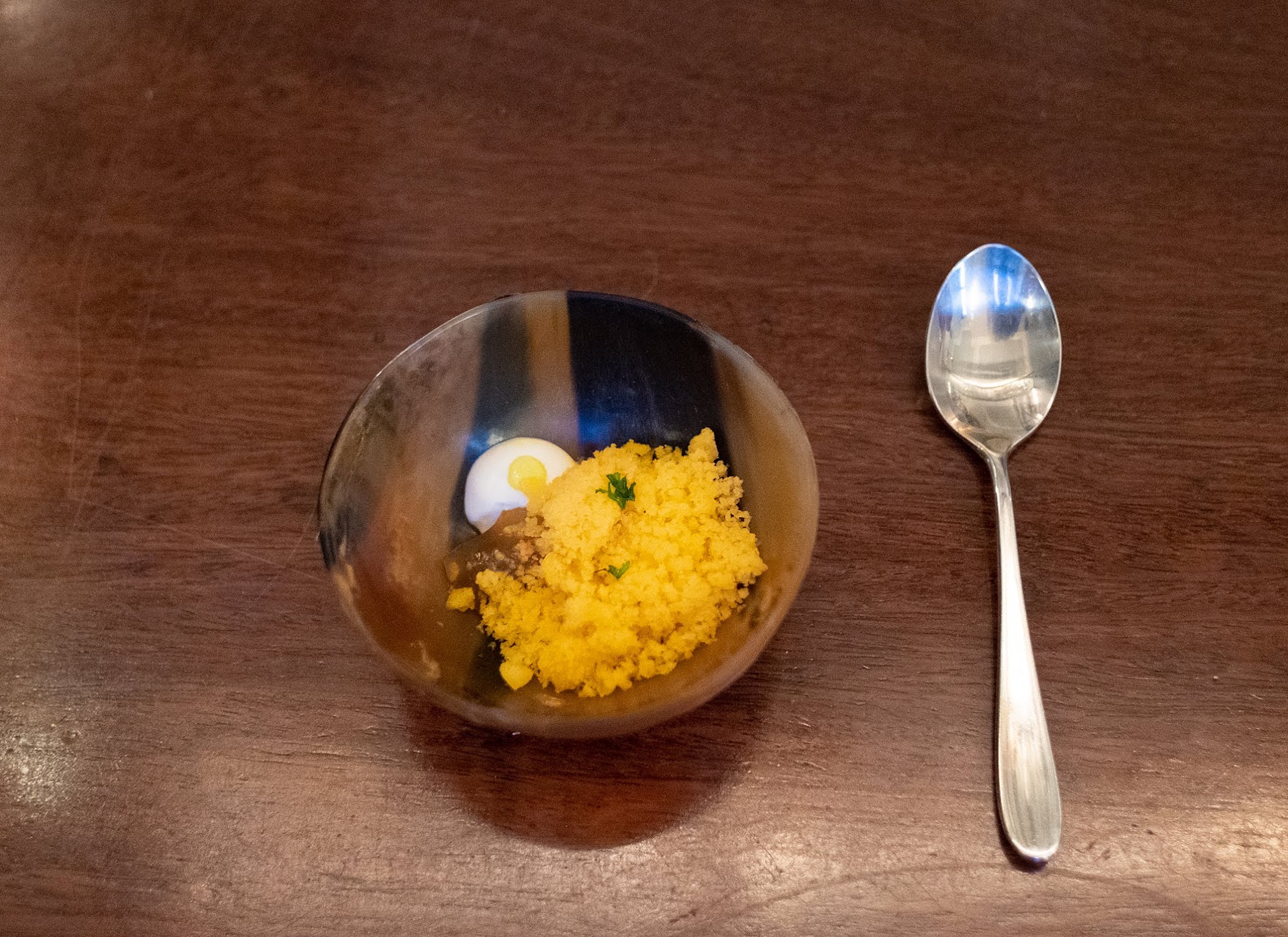 Melon gazpacho granita
Charcoal cream, ham hock jelly
After a day spent trooping around on a very warm London day, this was just so refreshing. The combination of chilled cream and ice was heaven, and the salty jelly was a nice counterpoint. The first of the proper courses definitely hit the spot. 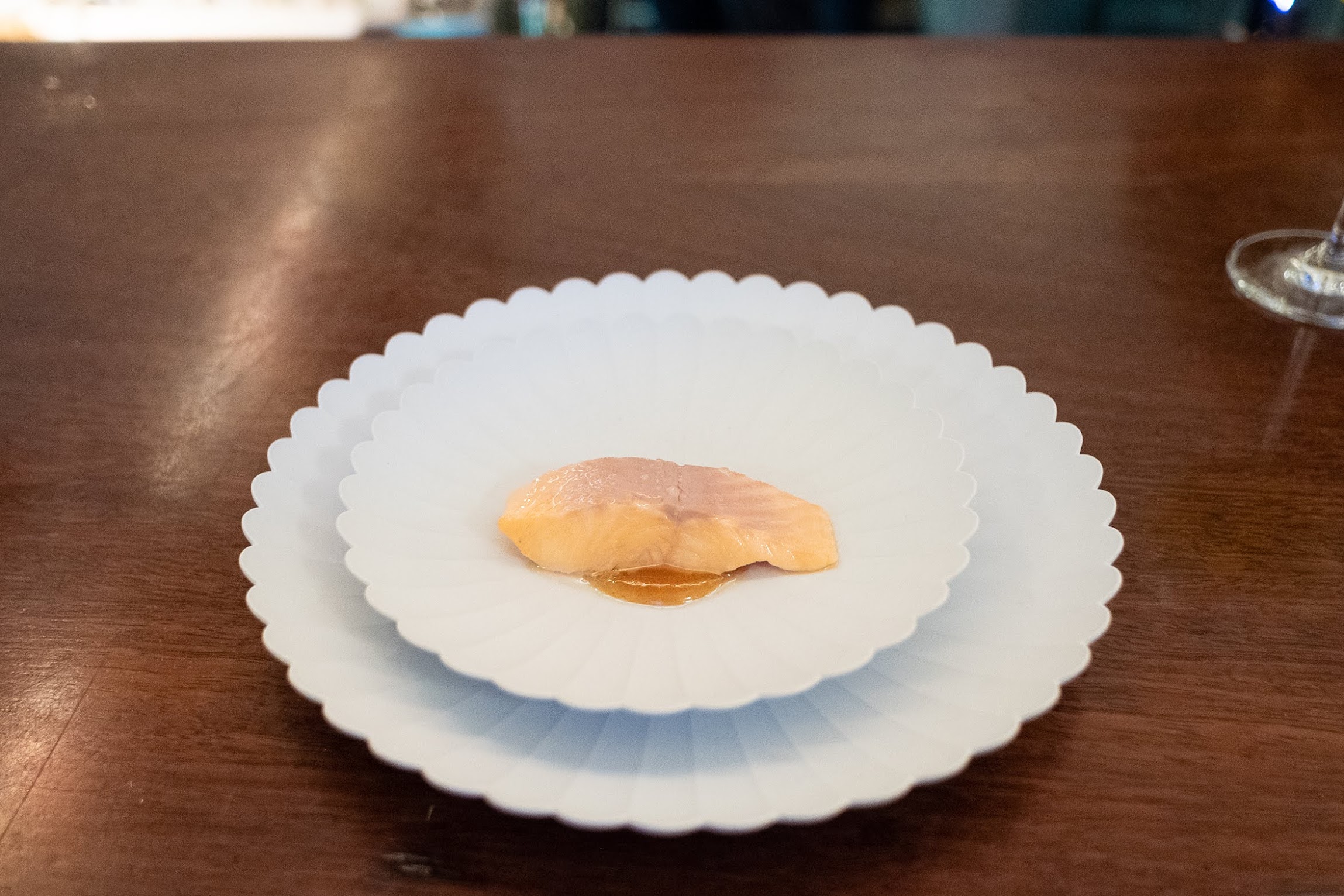 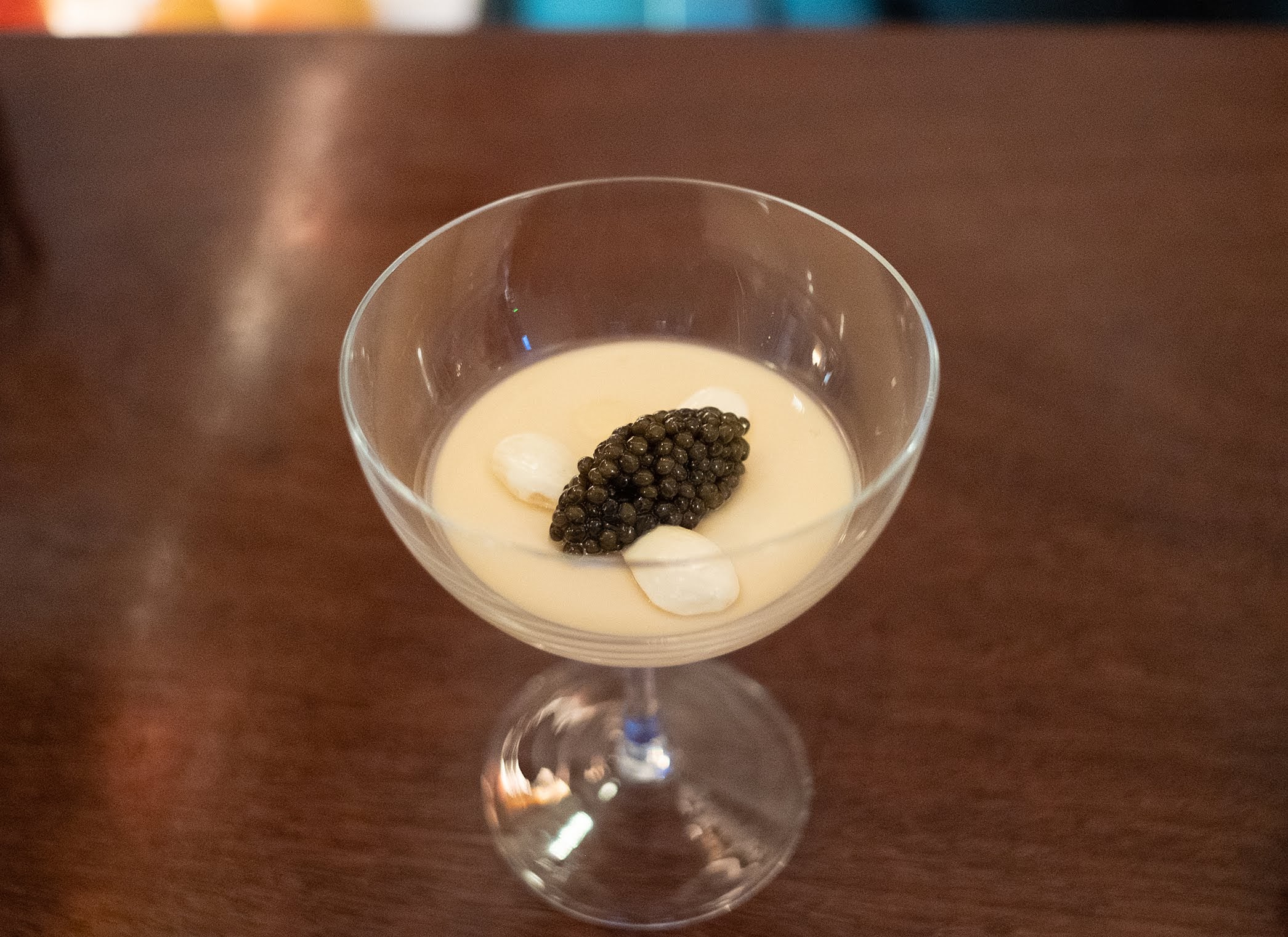 Blancmange, green almonds, osetra caviar
The chilled blancmange was flavoured with almond, as tradition dictates – together with the fresh green almonds on top, this was a lot. And yet, it worked remarkably well with the brininess of the caviar – I would not have guessed that! 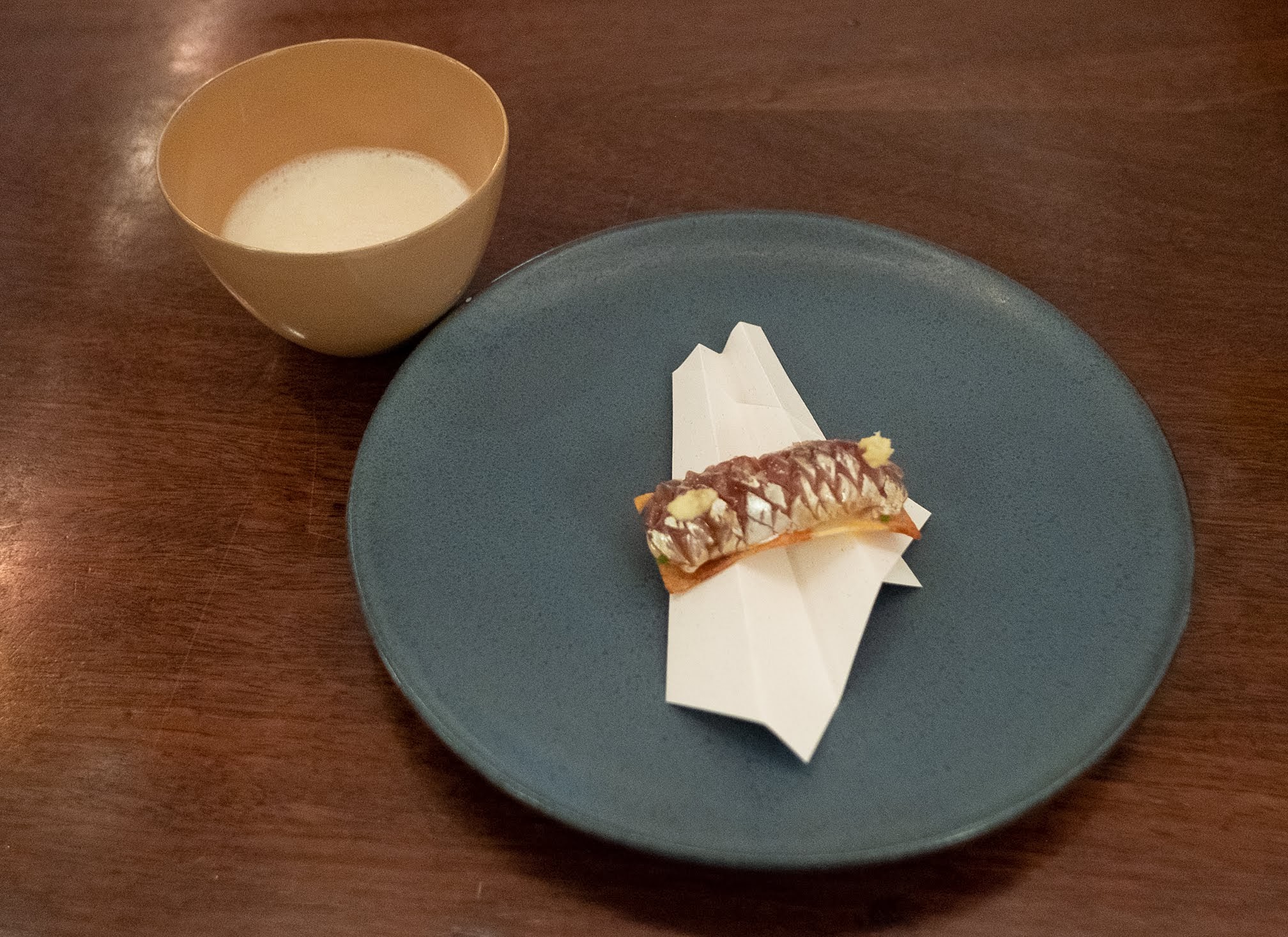 Sardine sashimi, potato crisp
Smoked sardine and whiskey broth
The sardine and potato “nigiri sushi” (I’m just going to call it that) was seasoned with English mustard and Worcestershire sauce – a truly British take. The quality of the fish was remarkably good and the bite worked, but I’m not sure there was any synergy with the broth (although that was quite tasty as a standalone). 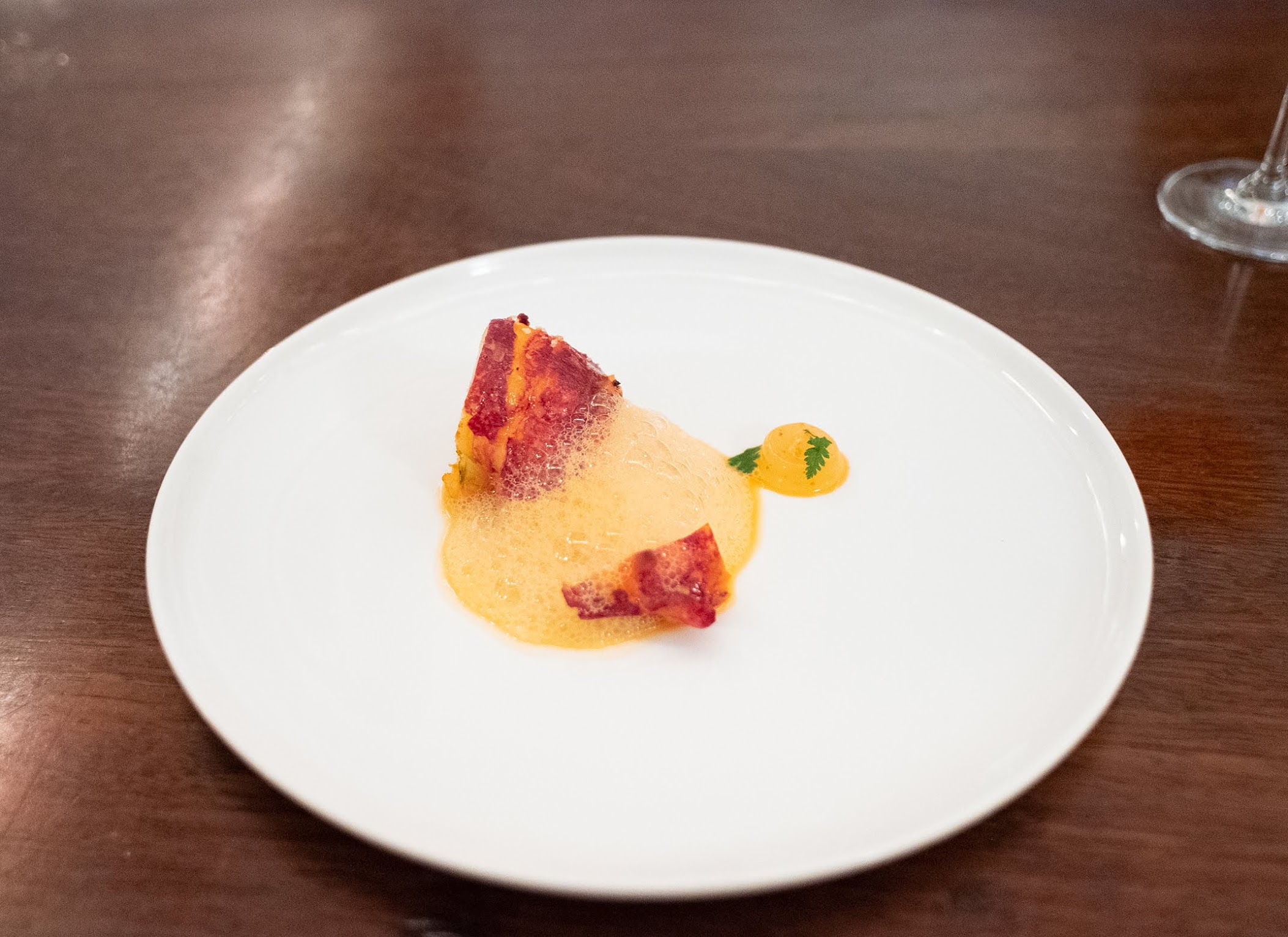 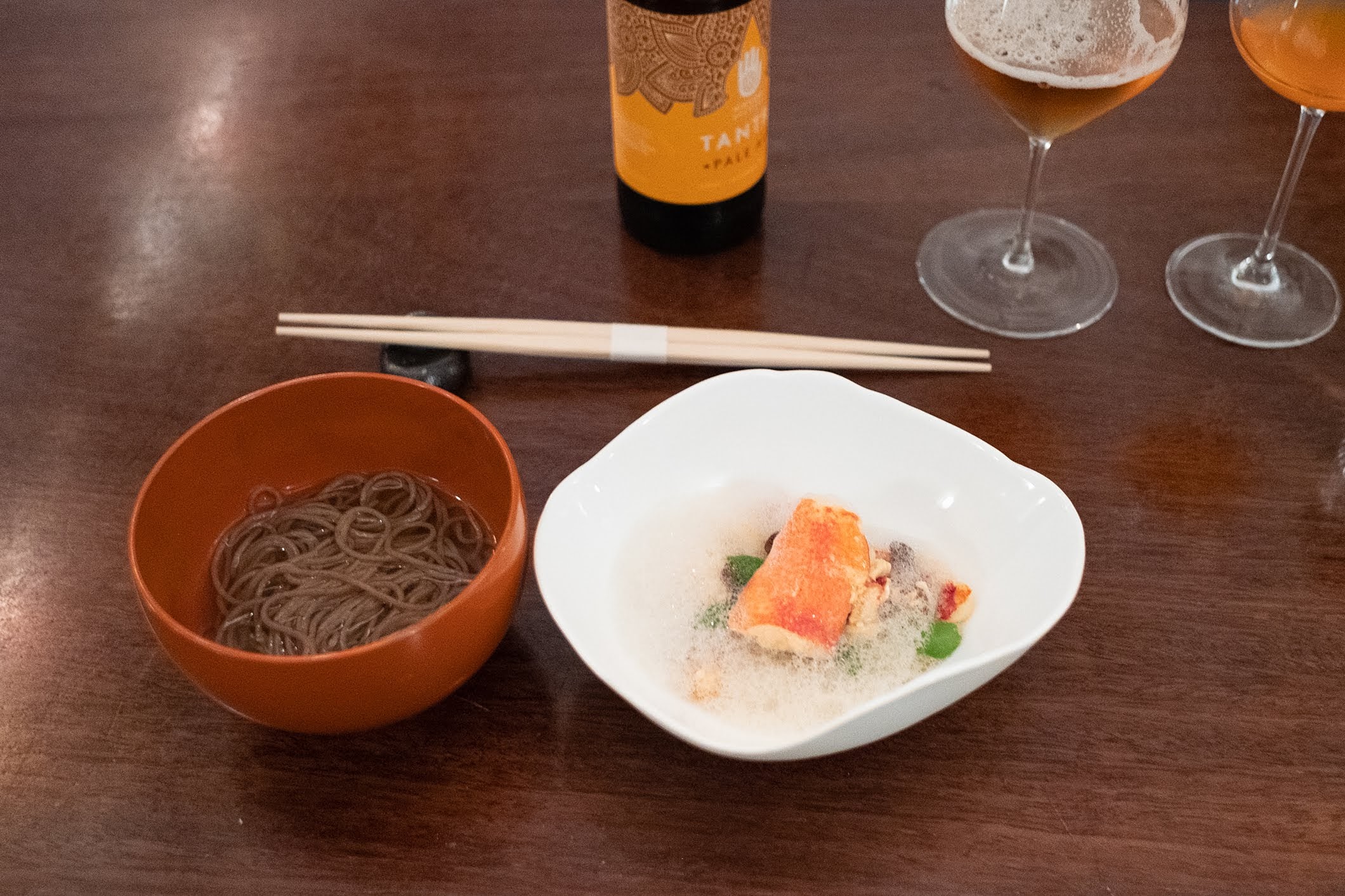 Lobster claw, broad beans
Ancient grain noodles, lobster bisque
Another British spin on a Japanese dish – the “soba” was made not from buckwheat, but from a heritage grain (I didn’t quite catch its name) harvested near the chef’s hometown. Interesting, but it didn’t have the bite that I crave from buckwheat noodles. 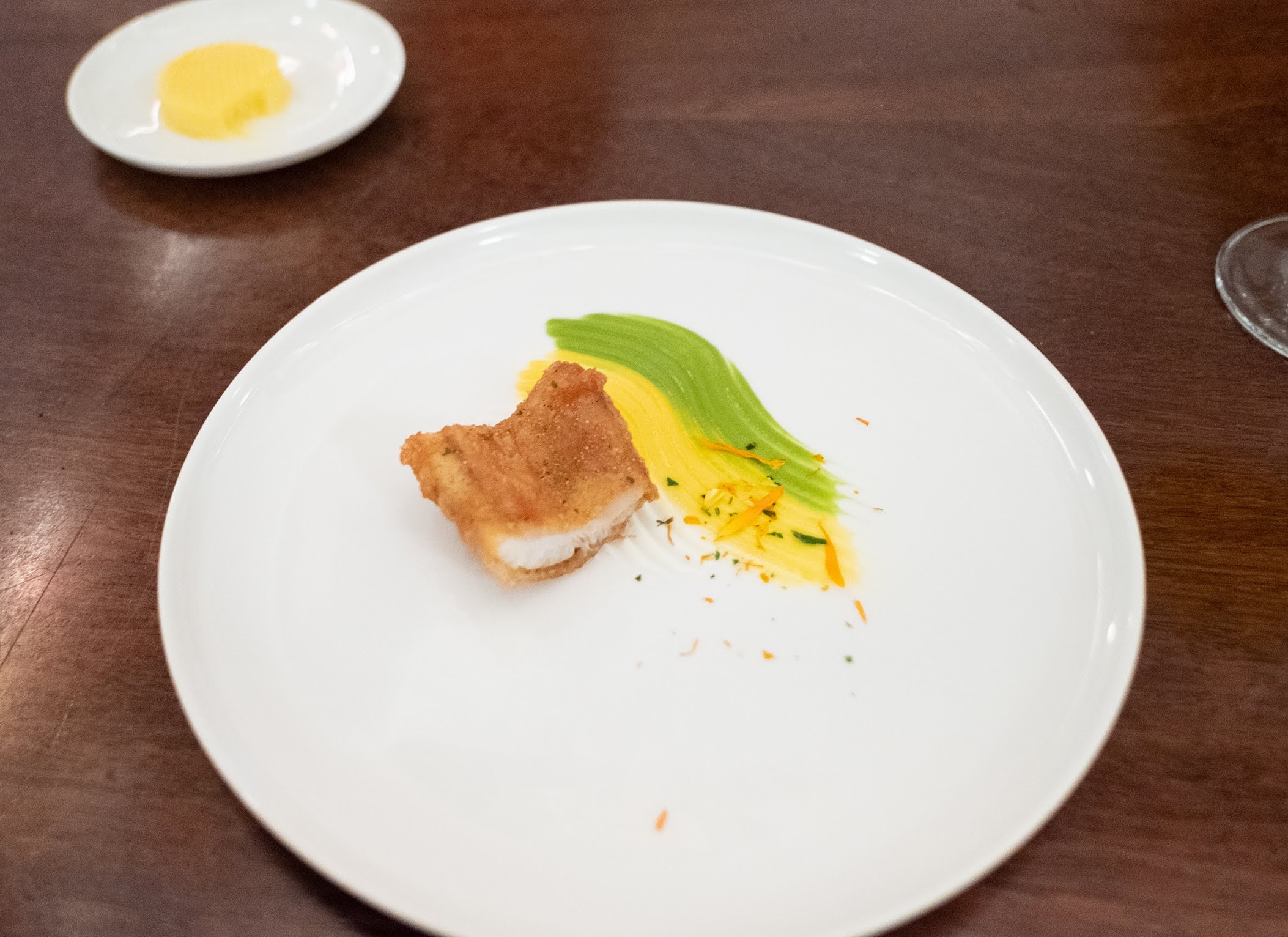 Spear-caught plaice tempura
Yogurt, courgettes, South Indian spices
The story goes that pakoras (fritters) were one of the chef’s first attempts at cooking as a child. I can’t speak to his early days, but this was fabulous – the plaice was perfectly fried, and the spice mix really evoked the feeling of eating a pakora, albeit highly gussied up. My favourite course of the evening. 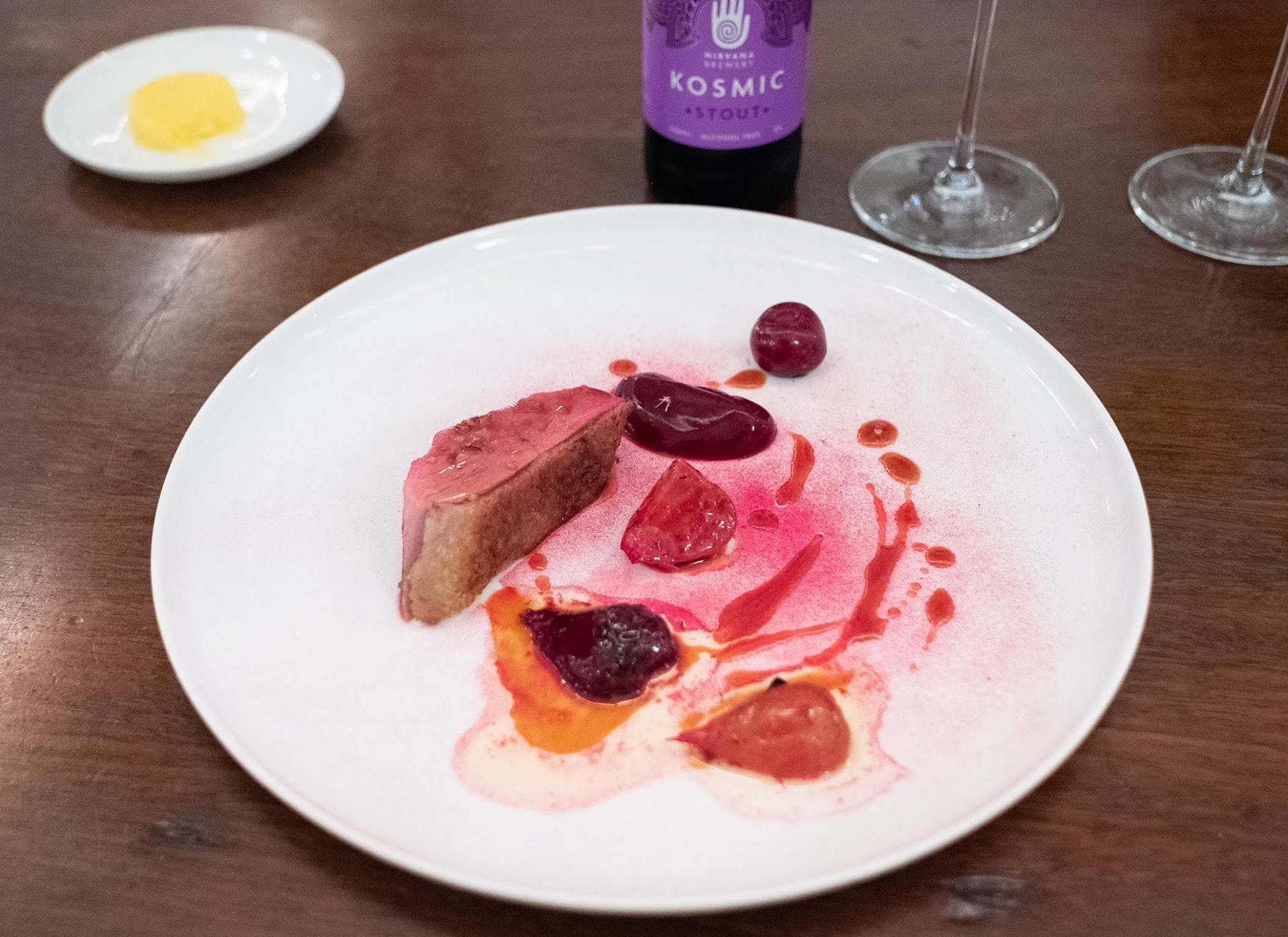 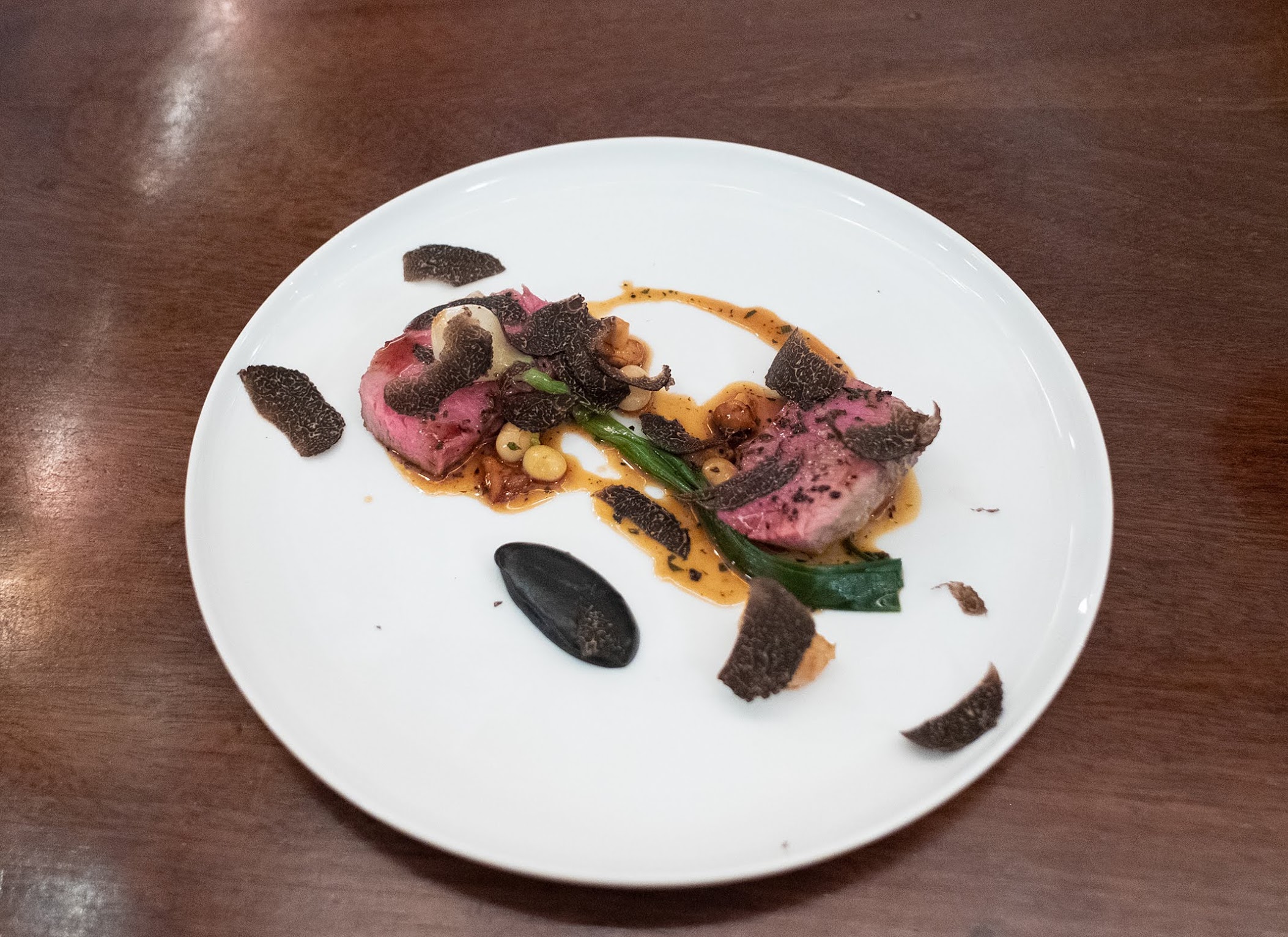 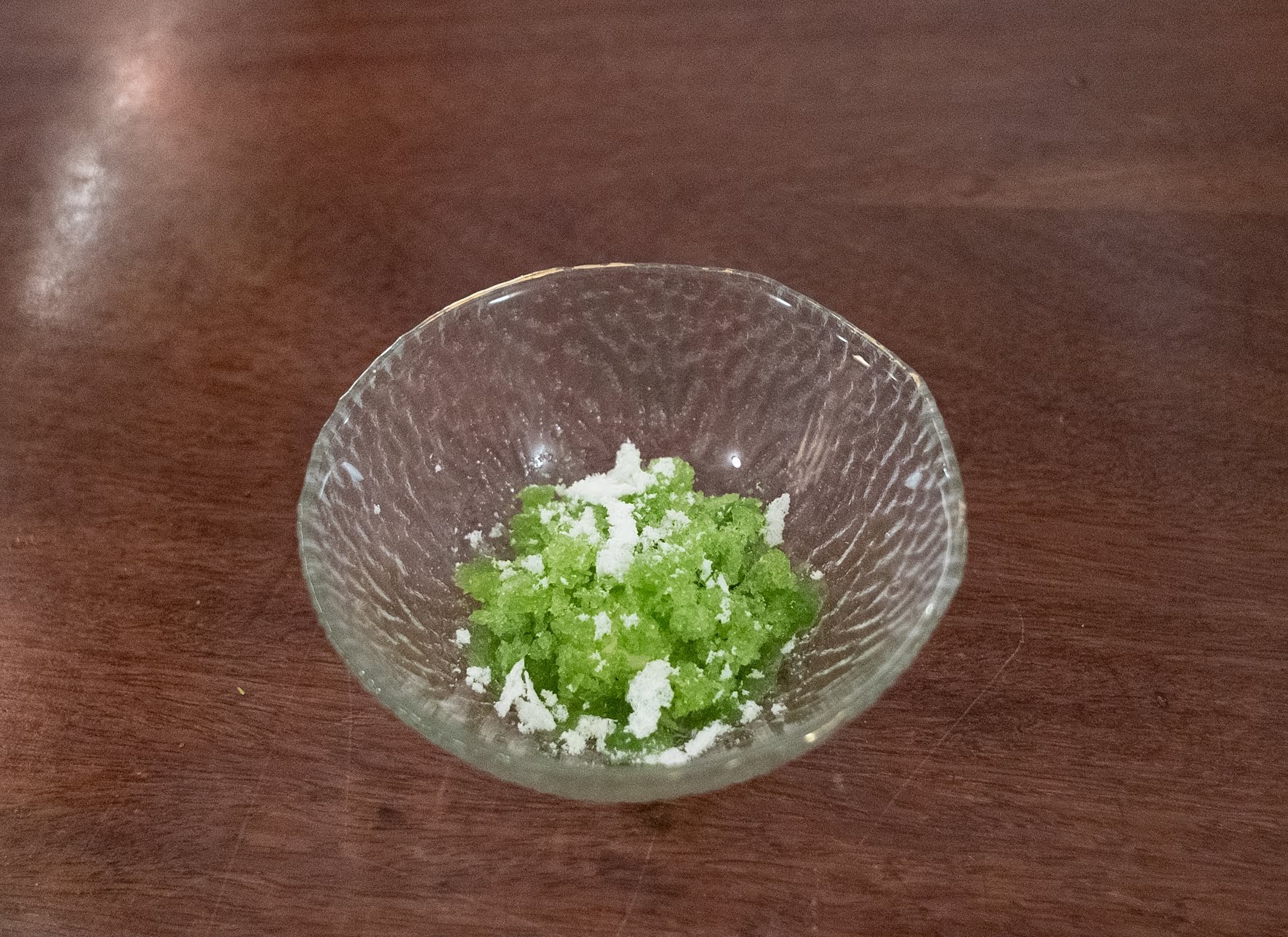 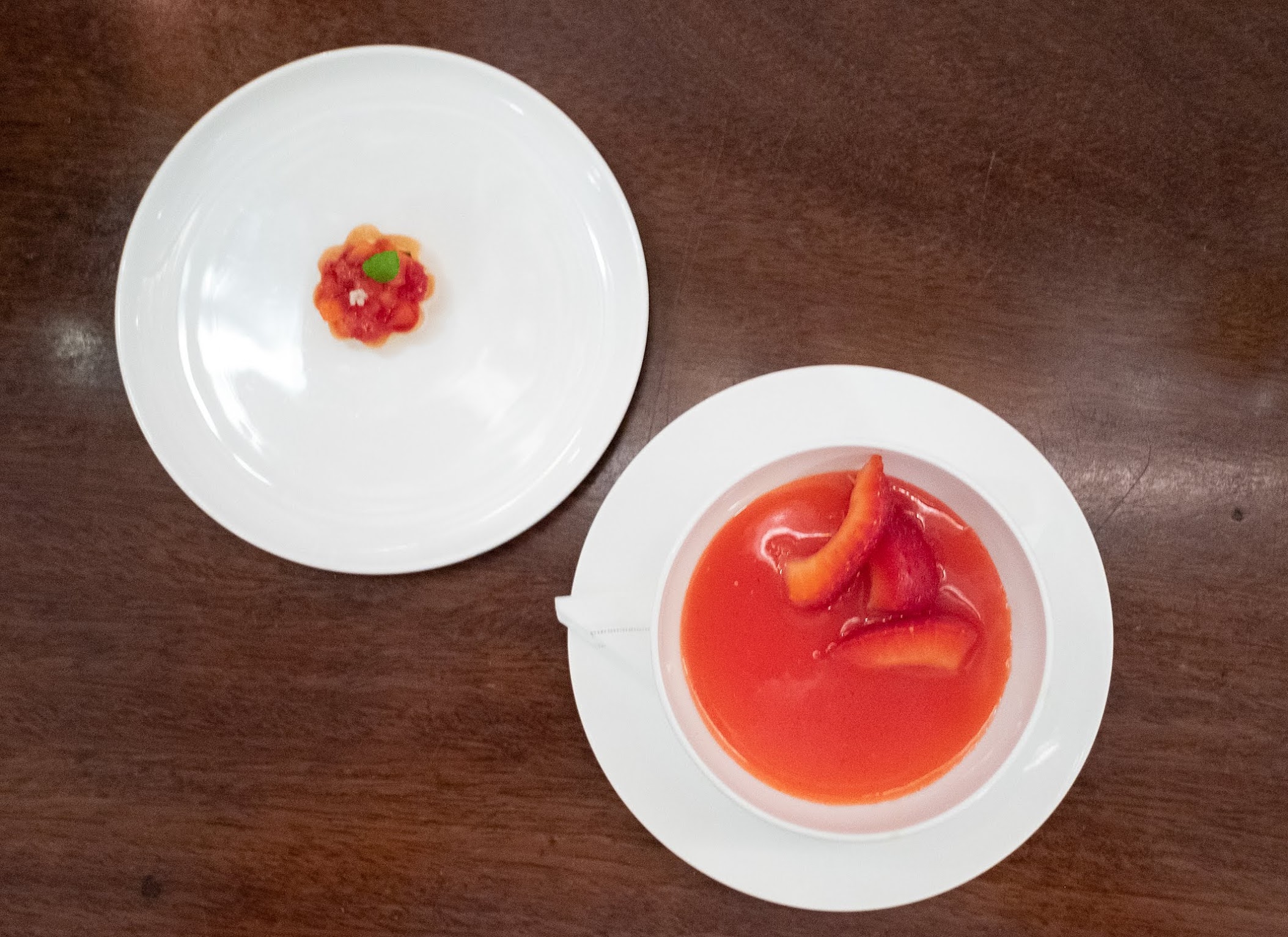 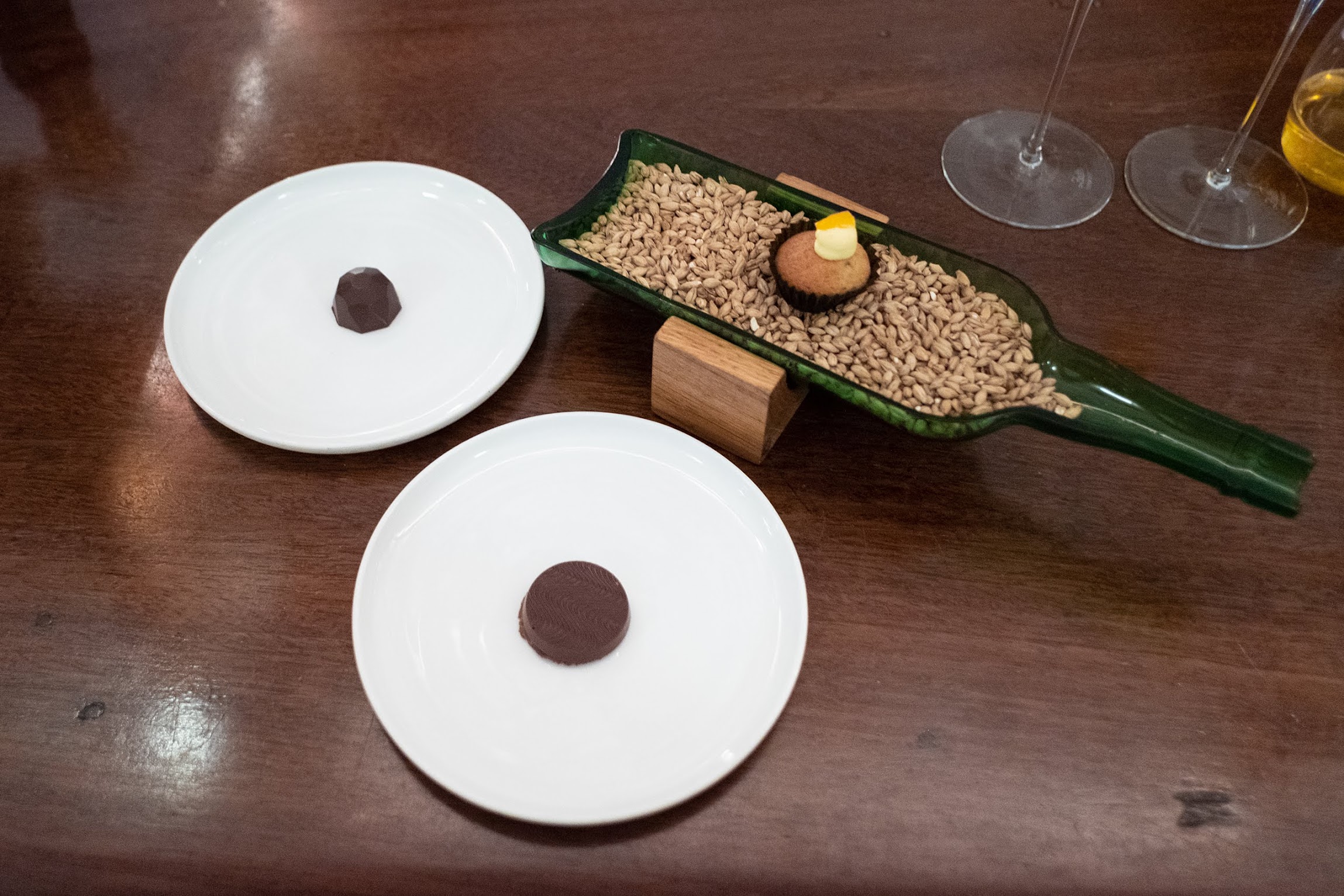 It’s worth mentioning the excellent cocktails, as well as the non-alcoholic pairing offered with the meal – the latter were particularly creative and not beset by the curse of overly high acidity that frequently plagues these drinks. This was a really good meal – conceived by a chef who sweats the details, executed by a crackerjack kitchen team, and served by knowledgable and friendly staff. Almost everything was spot-on, and I wouldn’t be surprised if they get nudged up to two stars in the near future. Definitely worth a return when we’re next in London.