My first experience at Maum was two months ago, as part of a collaboration series (that dinner being with Chris Kajioka and Anthony Rush from Senia in Honolulu). I enjoyed it quite a bit – enough to book a second dinner, this time with Matt Accarino of SPQR as guest chef. I am quite a fan of his pastas, and when I heard that Maum’s Michael and Meichih Kim used to work for Accarino in Los Angeles, my head swam with visions of Korean-Italian pasta (which were fulfilled, as you will see below). 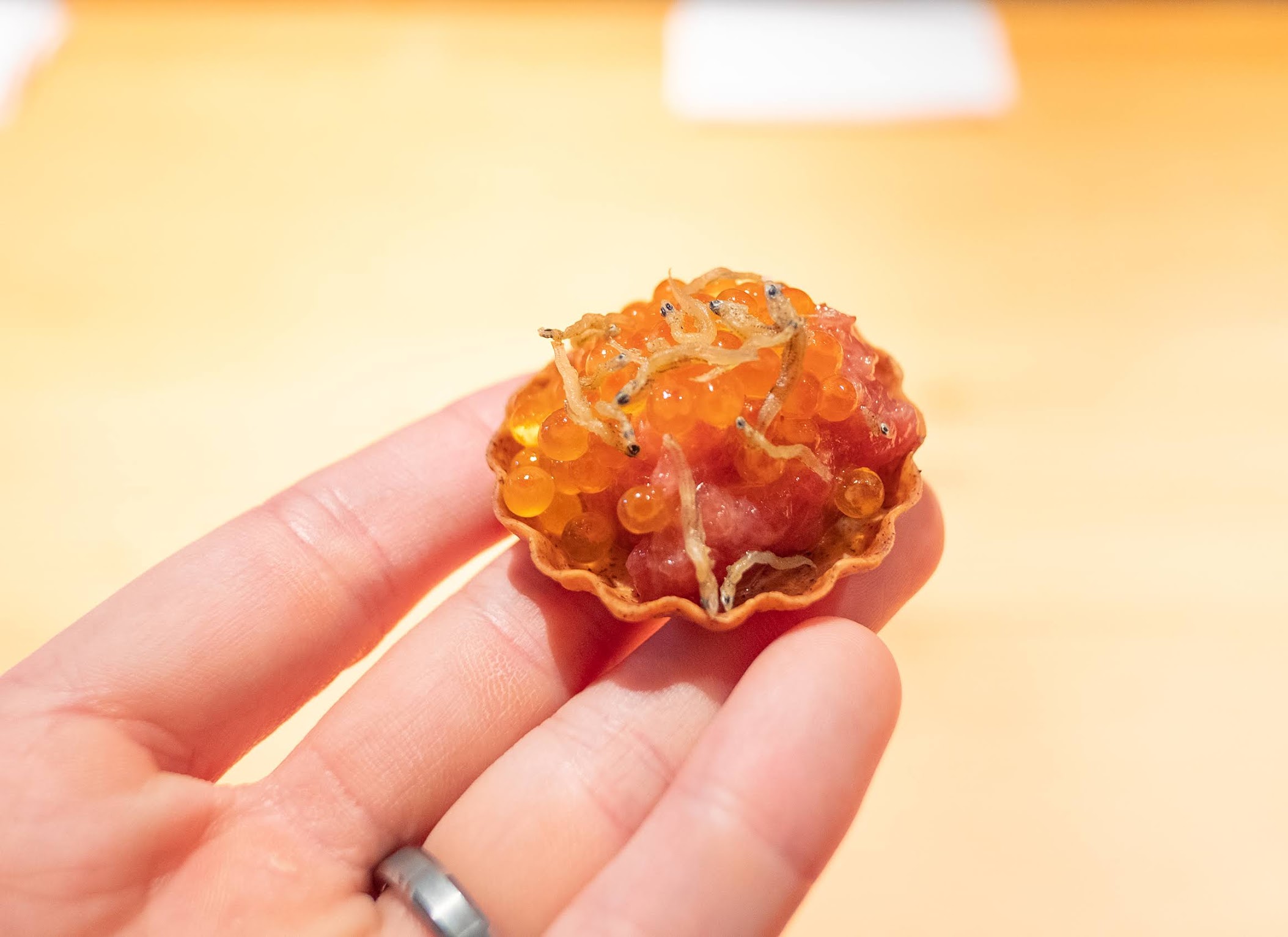 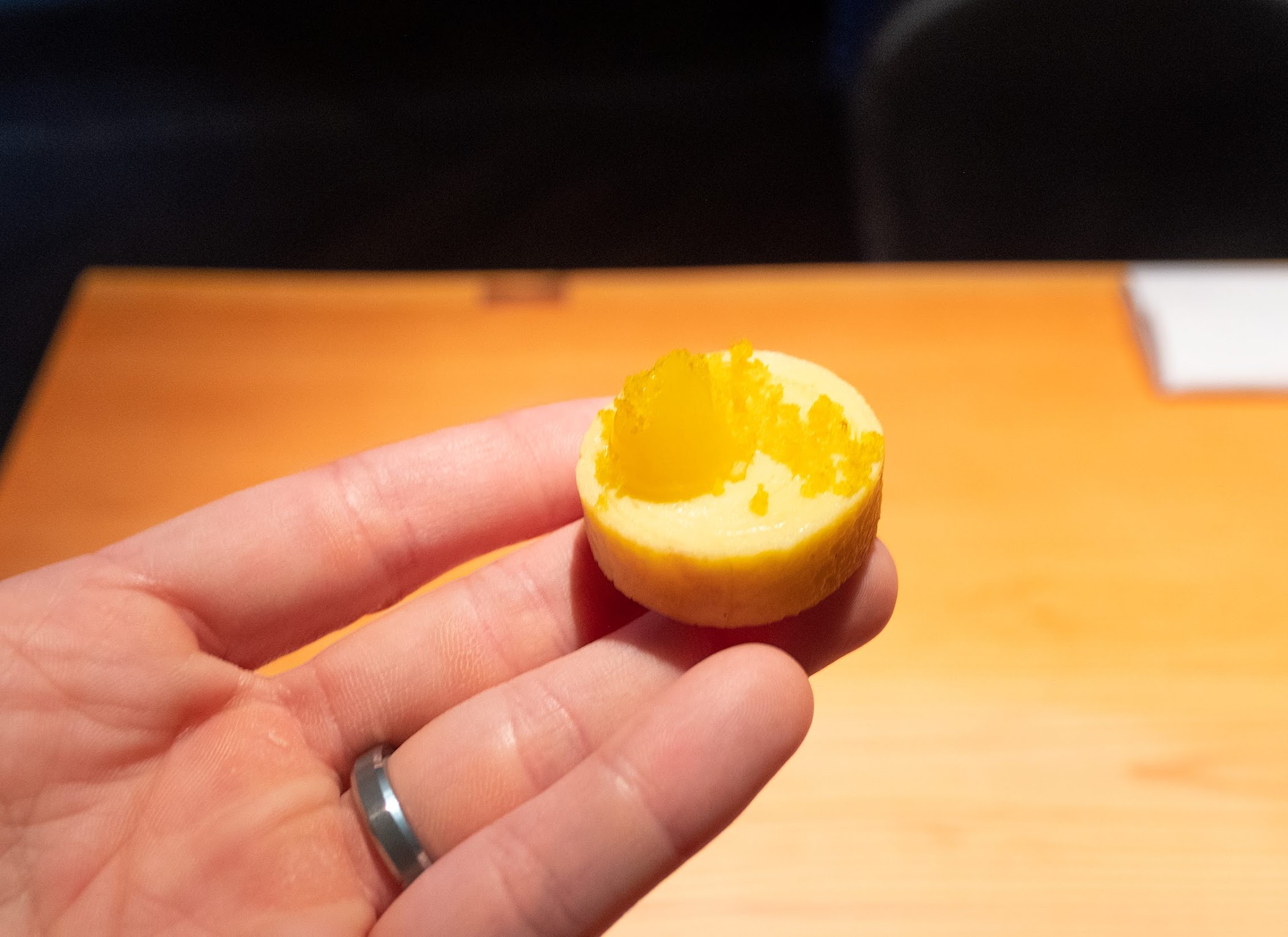 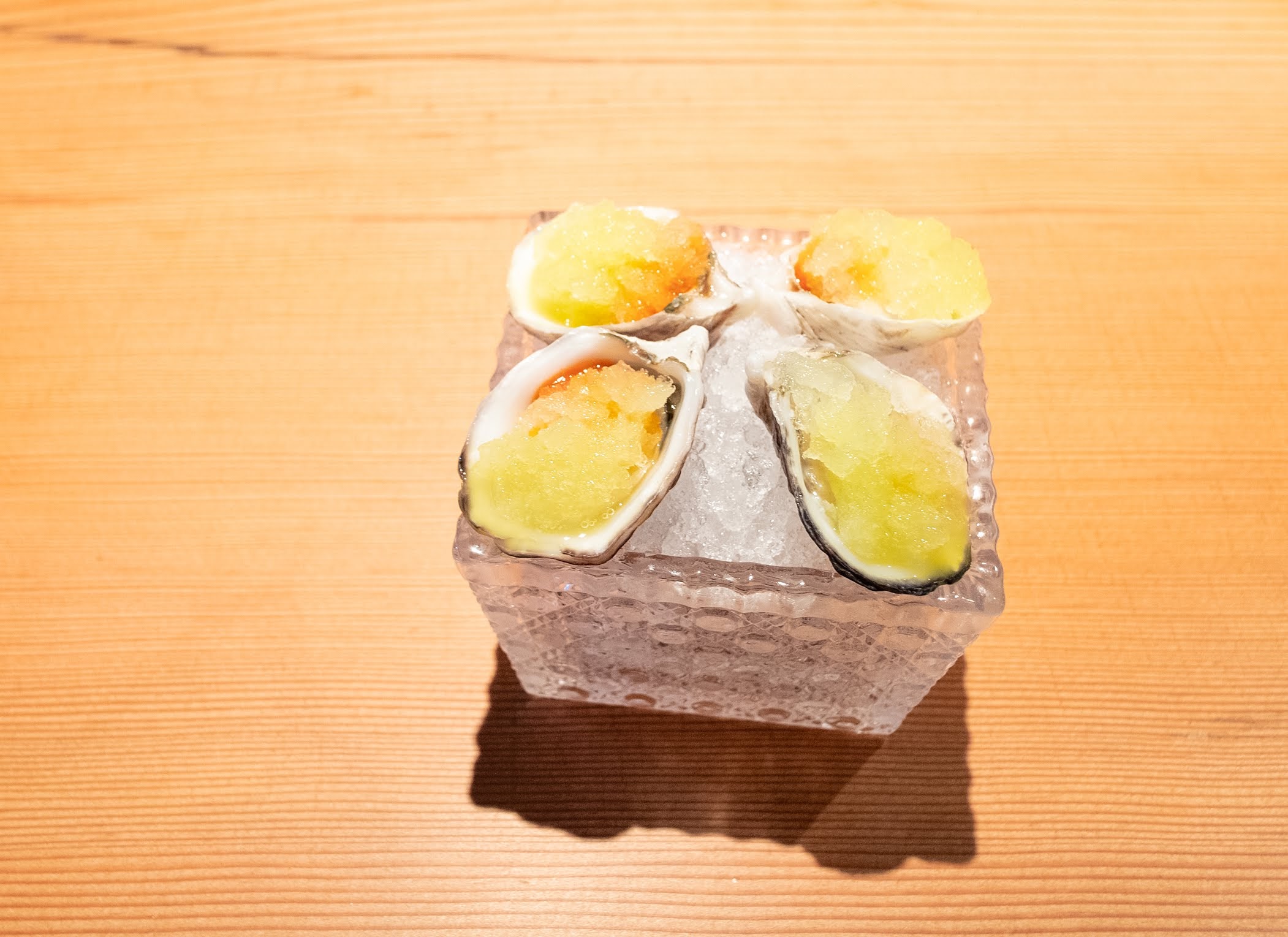 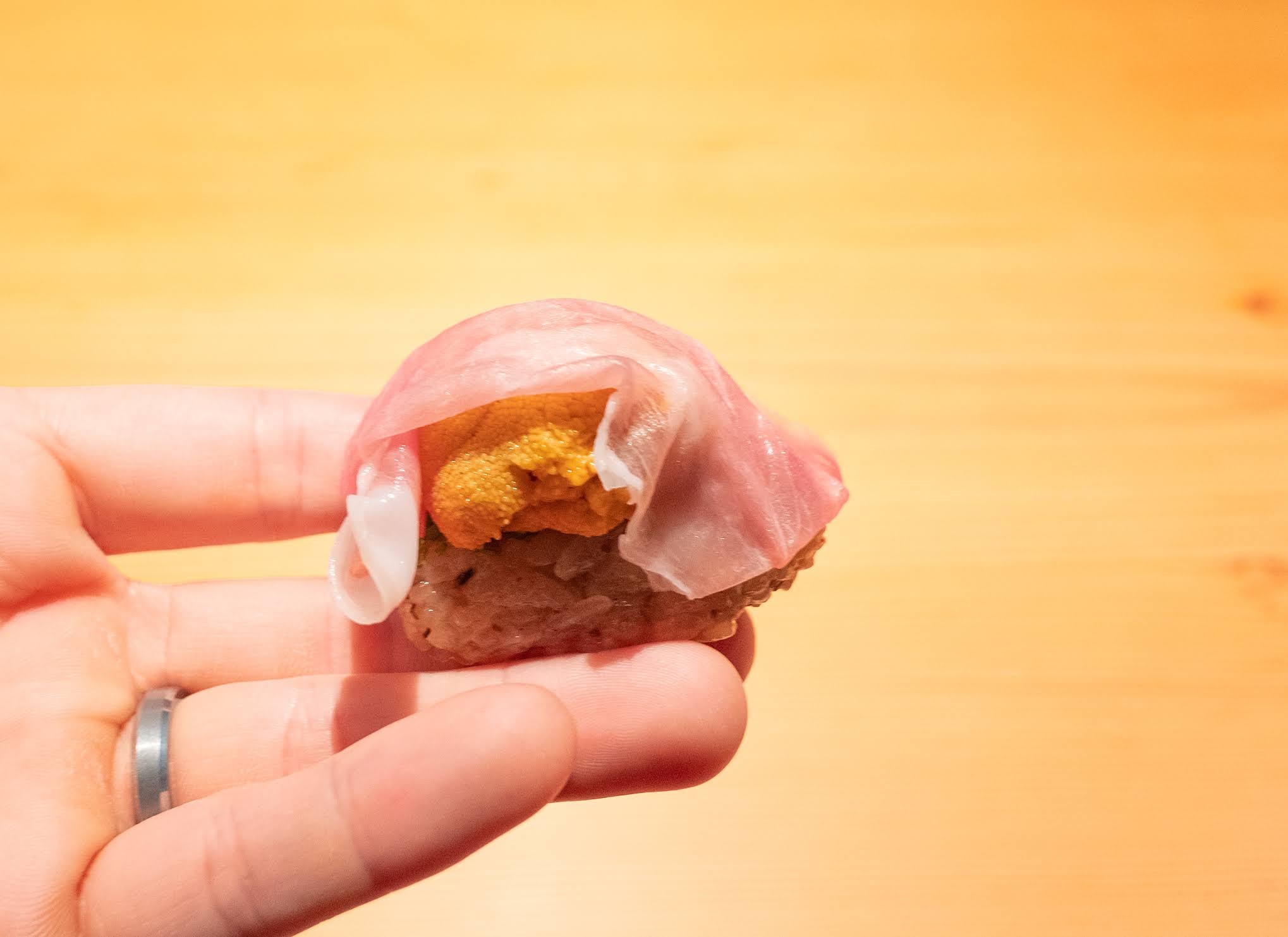 Hokkaido uni, proscuitto, porcini rice
I was skeptical, but this bite won me over. The warm koshihikari rice was nicely packed, and the “neta” of uni and proscuitto were a surprisingly good pairing – this was my favourite of the hors d’oeuvres. 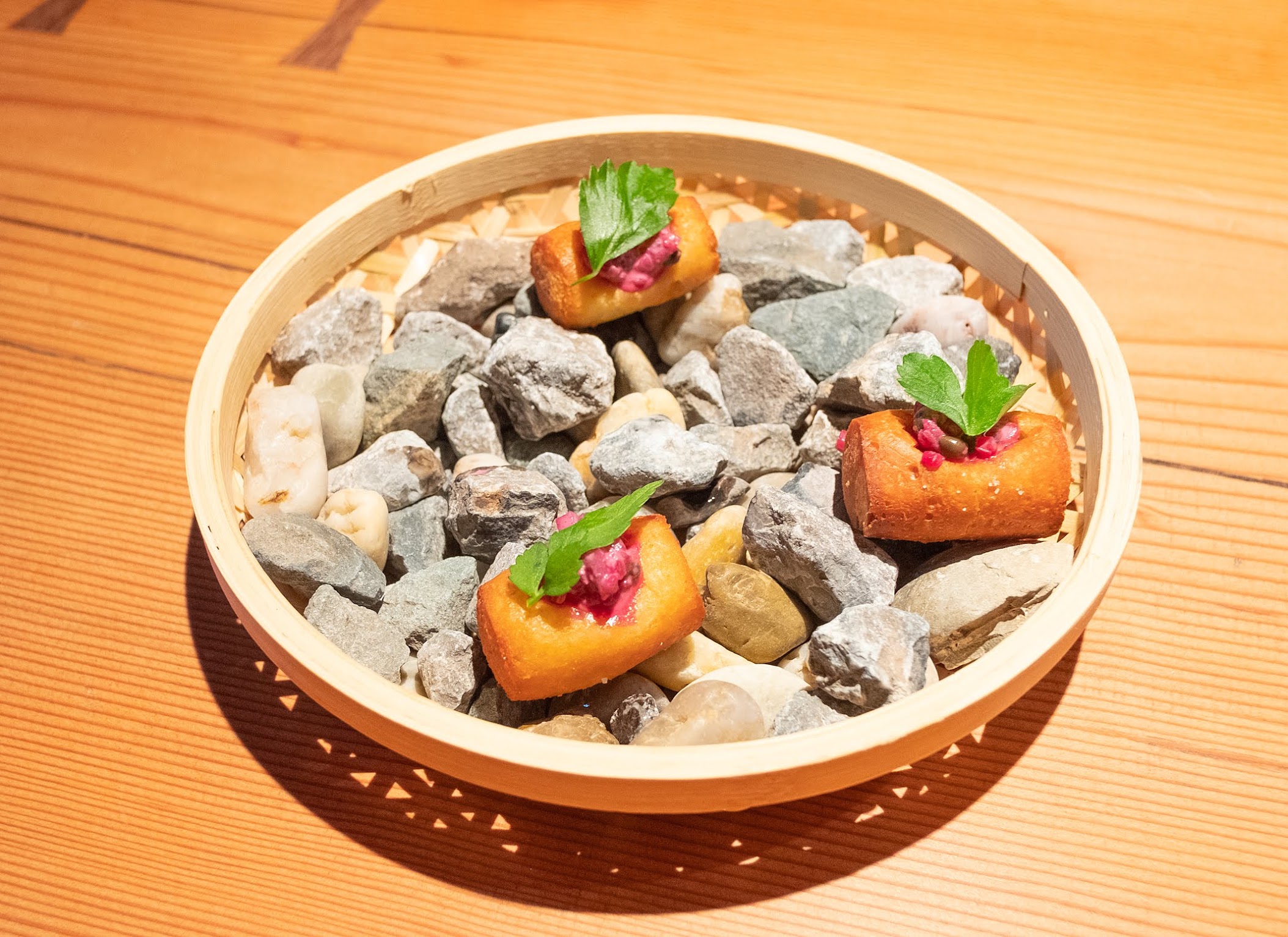 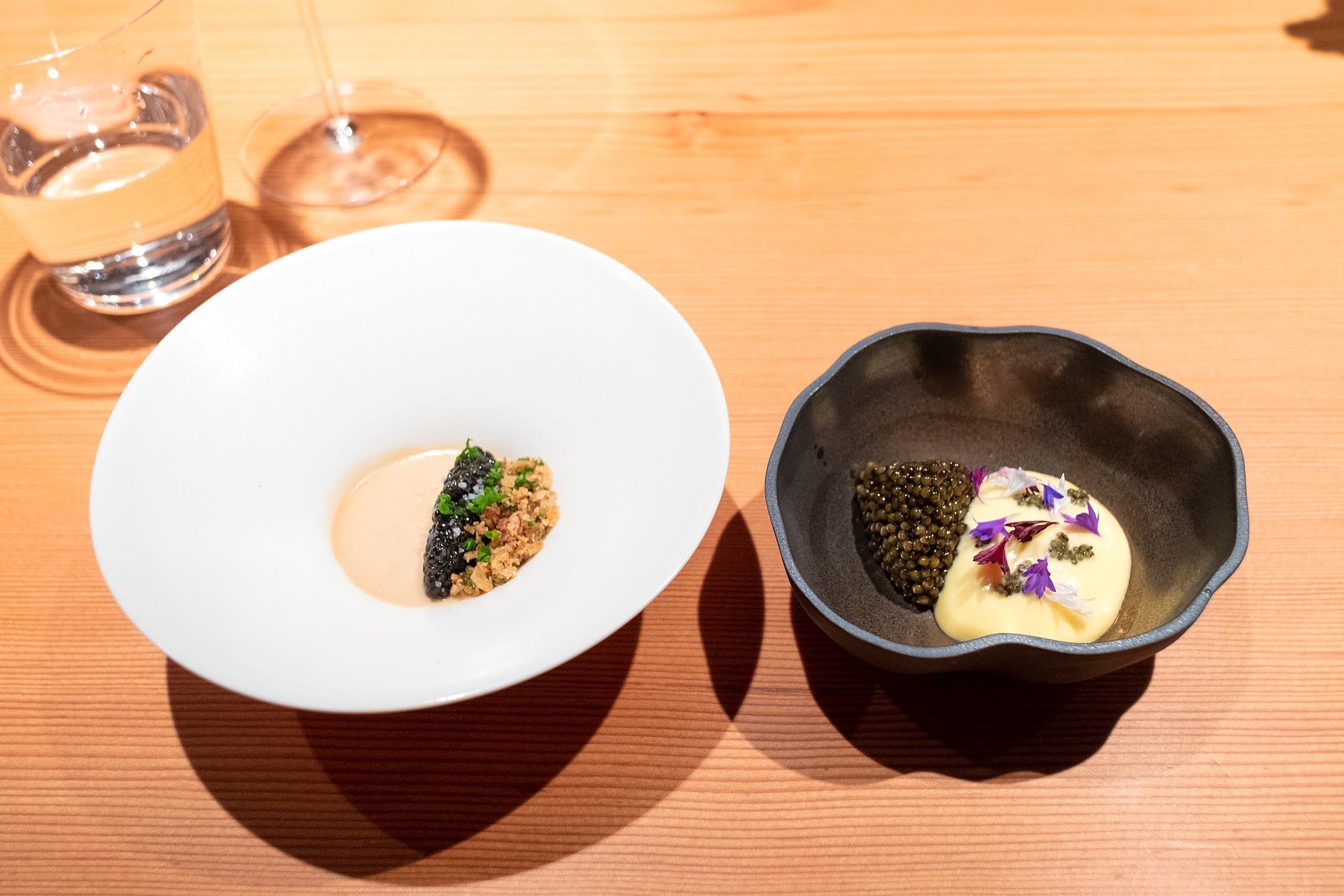 Caramelized onion panna cotta, ACCA caviar
Maum reserve caviar, corn-cheese foam
Two house-cured caviars, one from each restaurant, opened the meal. SPQR’s assertive version (left) was paired with a pungent onion panna cotta, and further adorned with crispy shallots and chives for texture. Maum’s subtler rendition (right) was accompanied by an airy foam. There was definitely a correct order to eat these two dishes in. 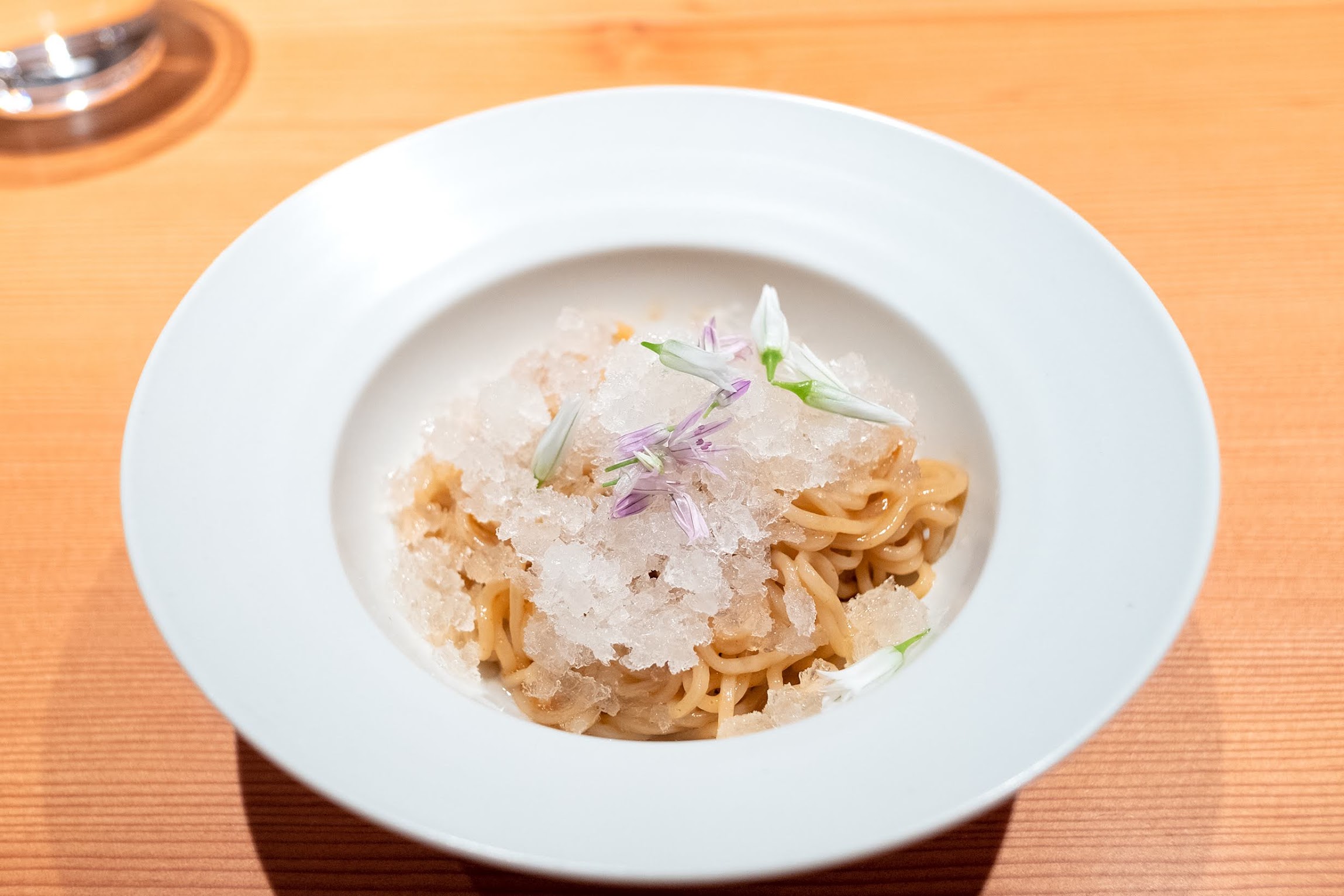 Perilla somyun
Gojuchang, mul kimchi ice, alliums
Thin, chewy wheat noodles were tossed in gojuchang and topped with a refreshing granita of mul kimchi. This dish was packed with flavour and perfect for the warm weather – one of my top courses of the evening. 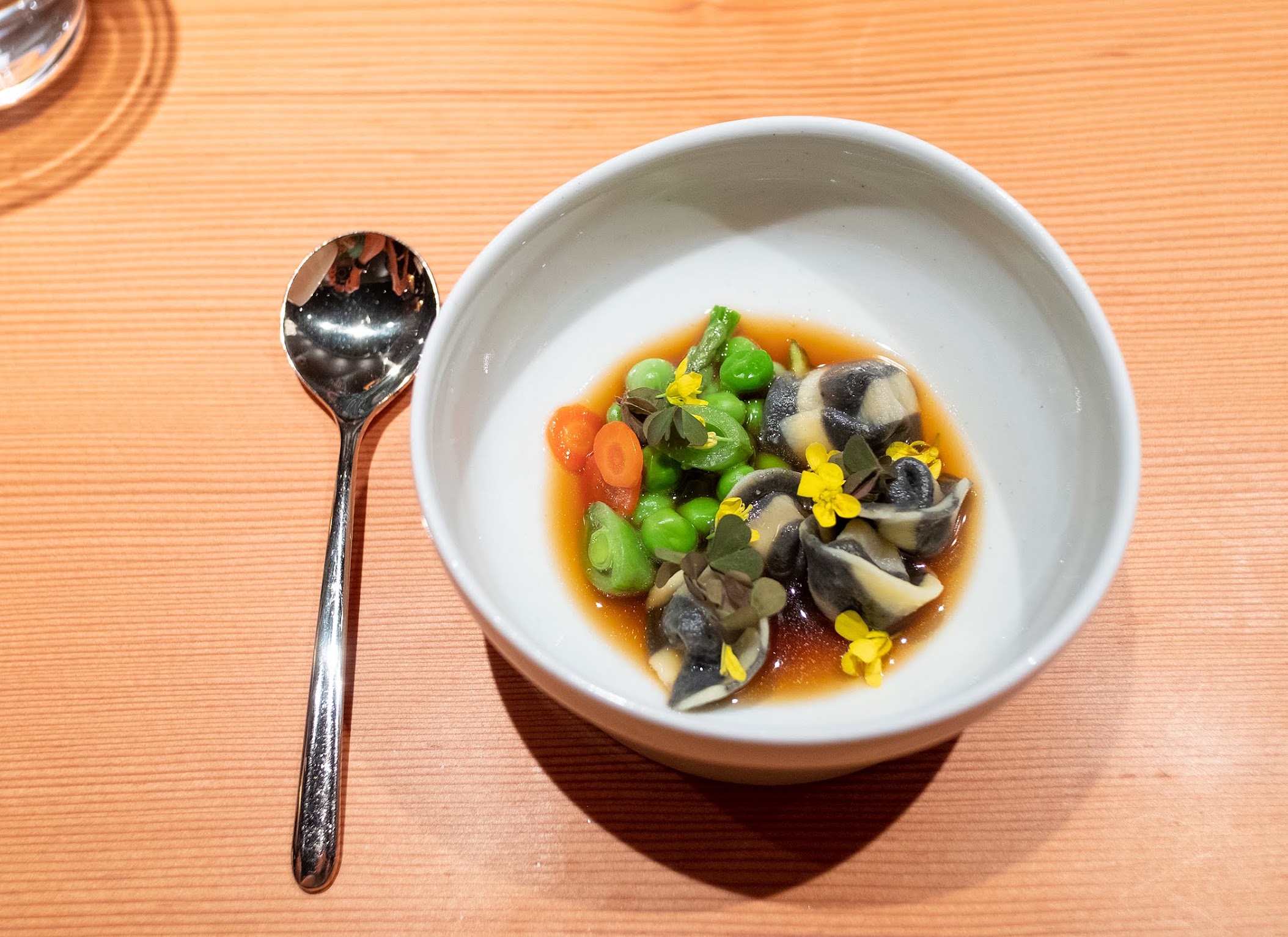 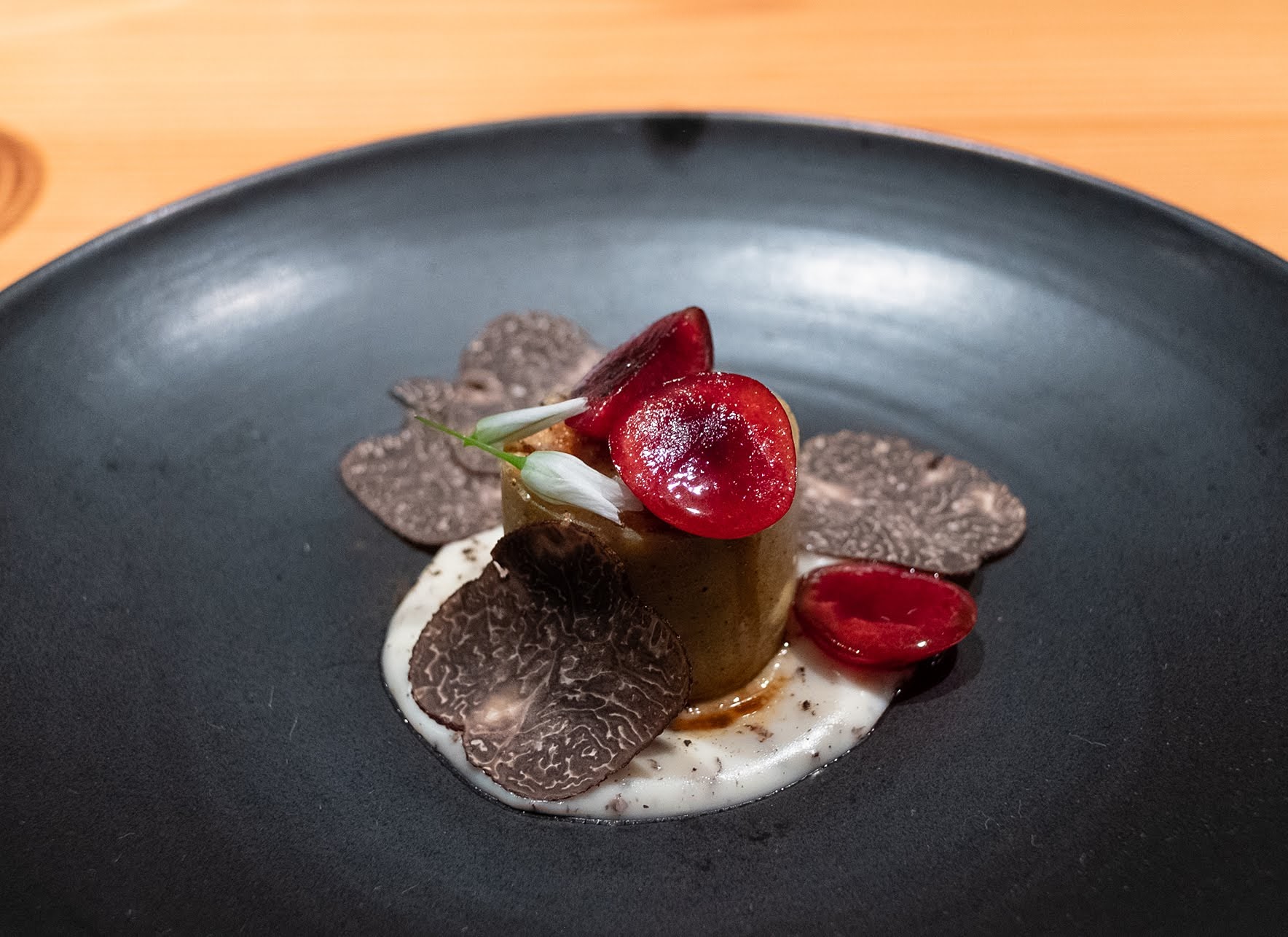 Smoked cherry bark pasta rotolo, duck leg confit
Black truffle bechamel, verjus-poached cherries, pickled ramps
An involved dish with a lot of technique – it also showed off the integration of the two kitchens. First-of-the-season truffles from Australia were shaved tableside, and were quite good. The sliced cherries really made the dish for me, serving as a nod to the season and balancing the heaviness of the other components. 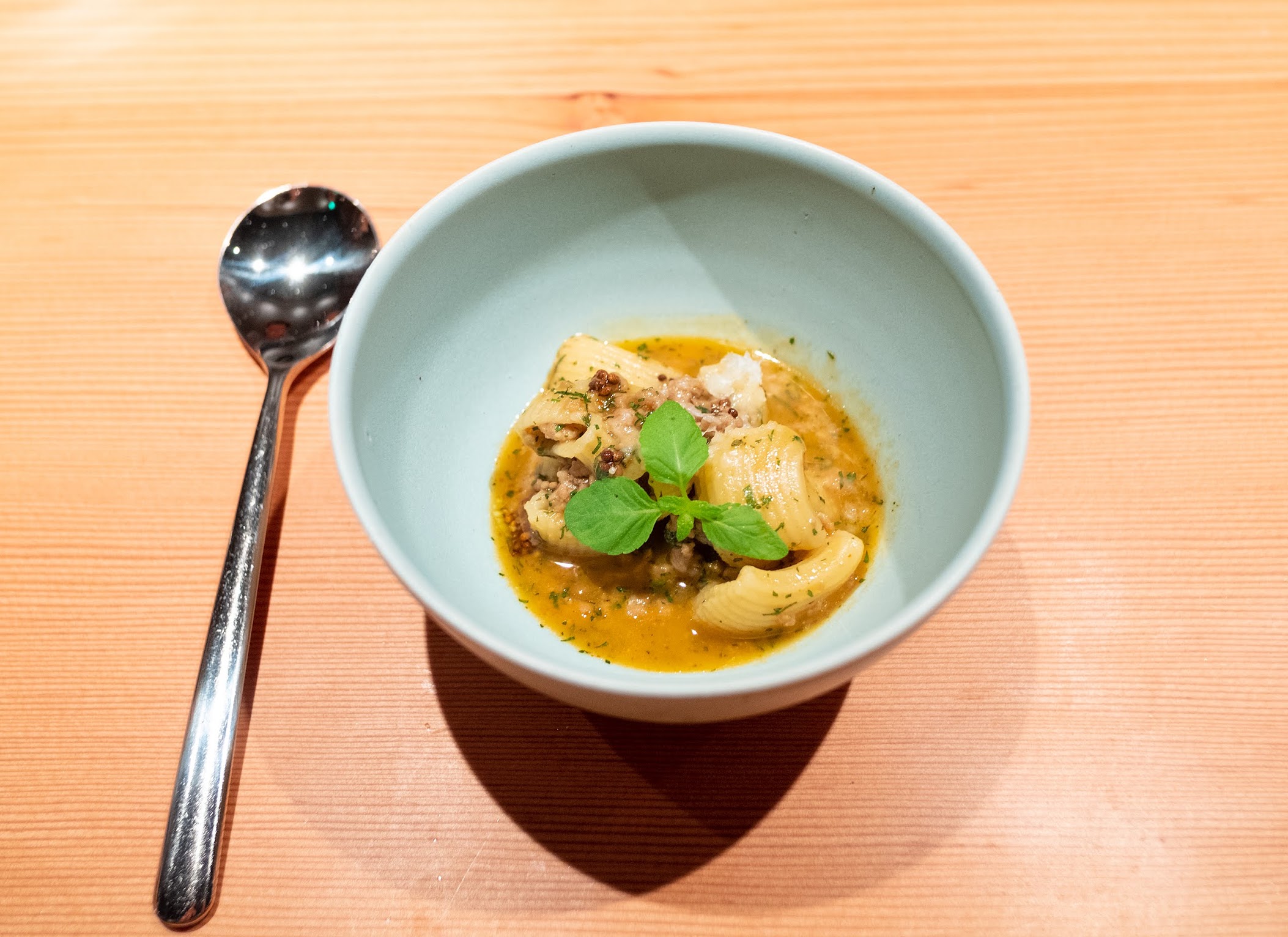 ‘Gamjatang’, sweet rice pasta, perilla
Traditionally a pork bone stew, the gamjatang was reinvented here as a braised pork bolognese cooked with gojuchang, doenjang and gochugaru. This thick, warm, spicy mix was served with an al dente pasta made from sweet rice. Amazing – my dish of the night. 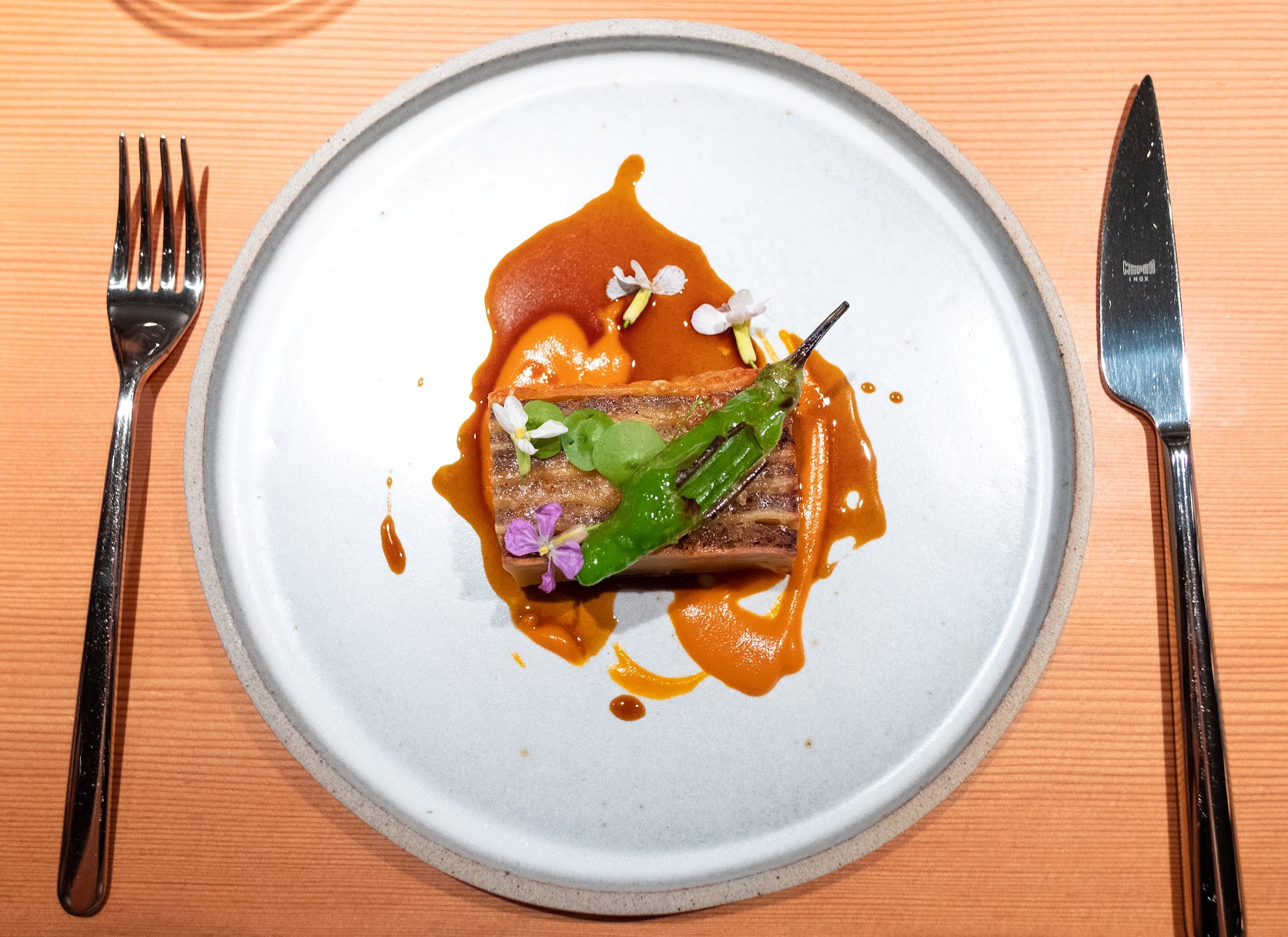 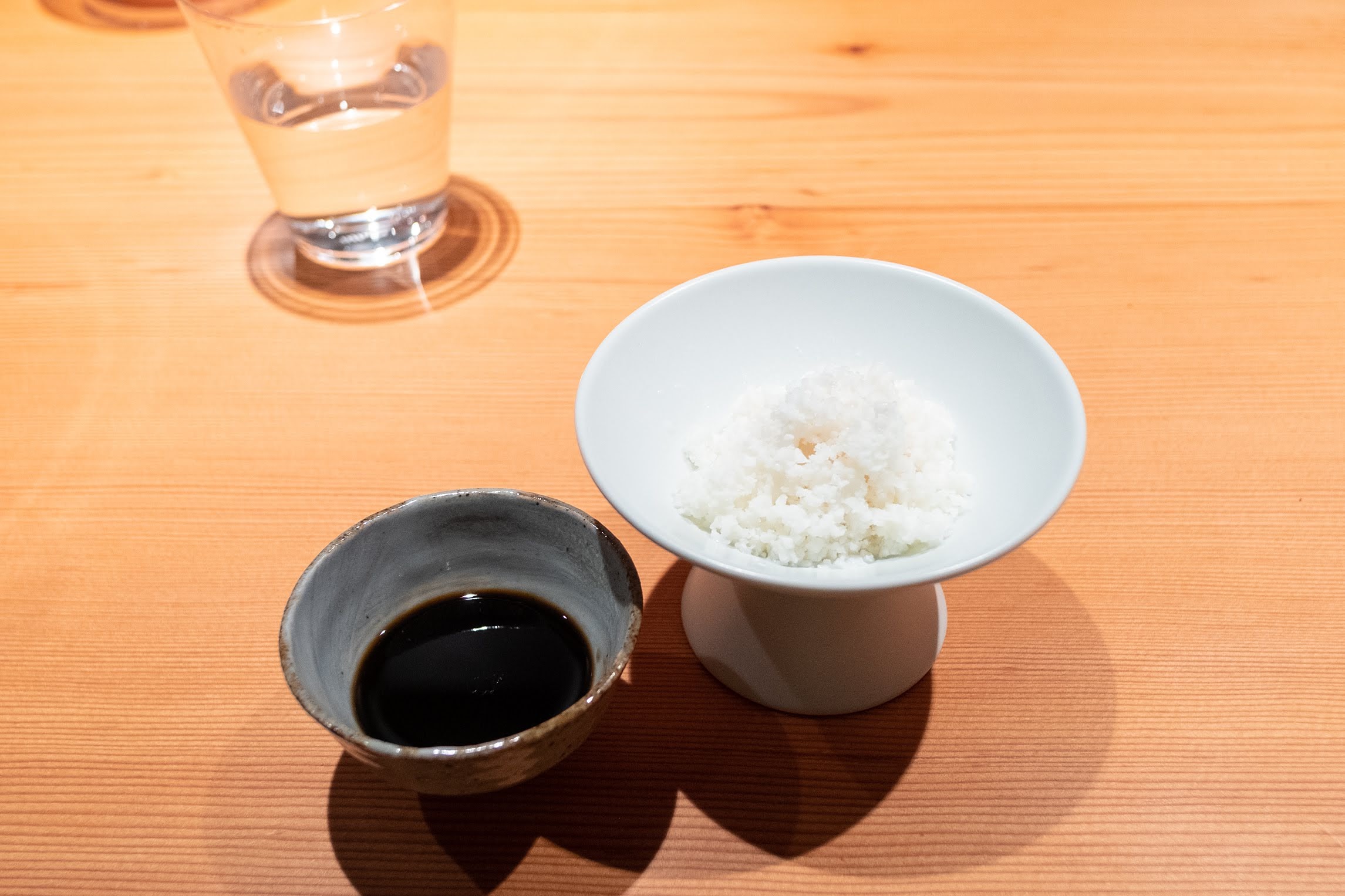 Accarino pecancino
Toasted almond sorbet, milk ice
Matt Accarino told a nice story about how he met Peter Jacobsen of the namesake farm – it culminated in him, many years later, making his own nocino from pecans (i.e. a pecancino) picked from the farm. Accarino’s version was a viscous, sweet, aromatic, herbal sip – a proper tribute. It was cleverly paired with an earthy almond sorbet and creamy milk ice from Maum’s Catherine Kim. Delicious. 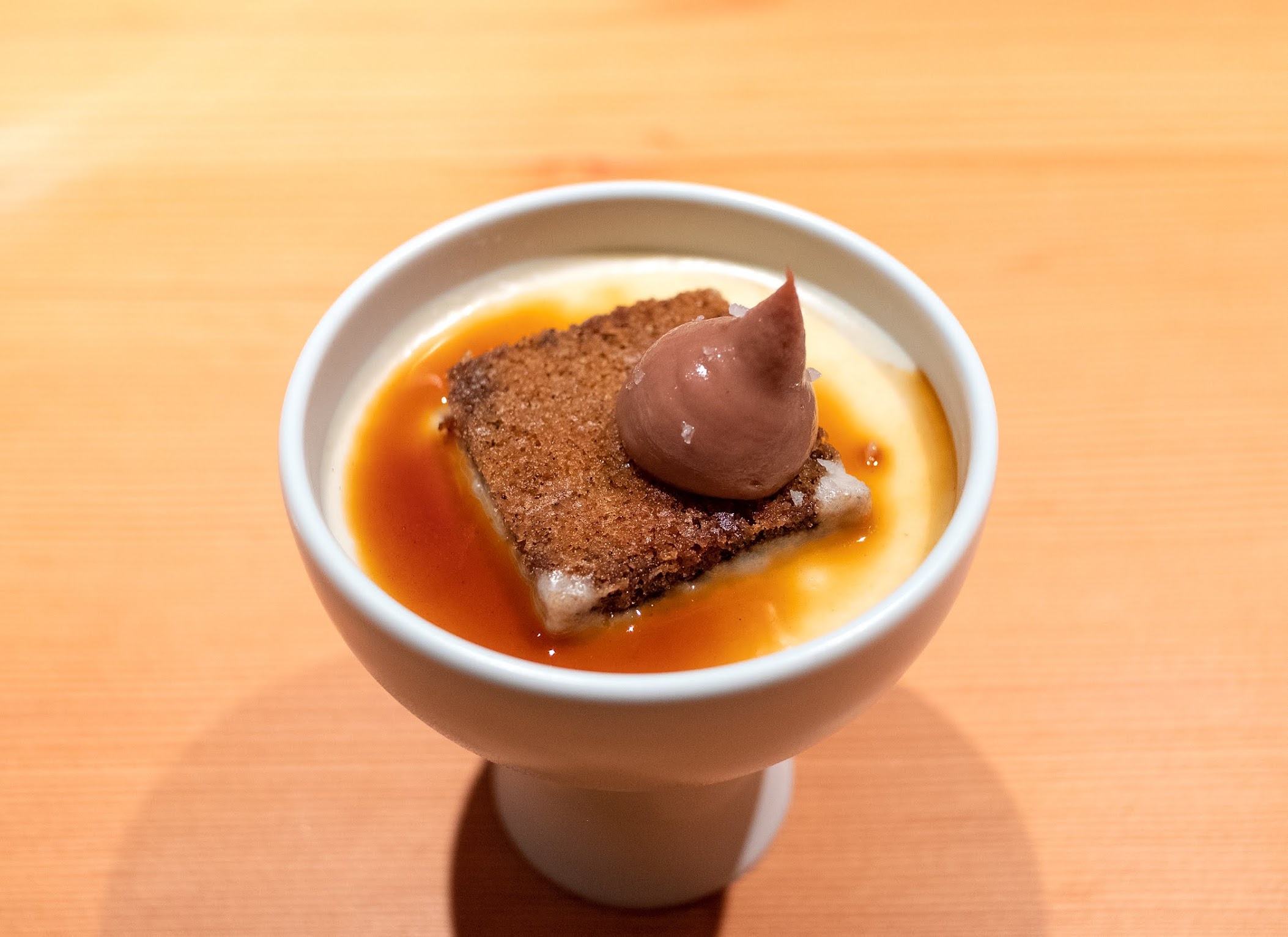 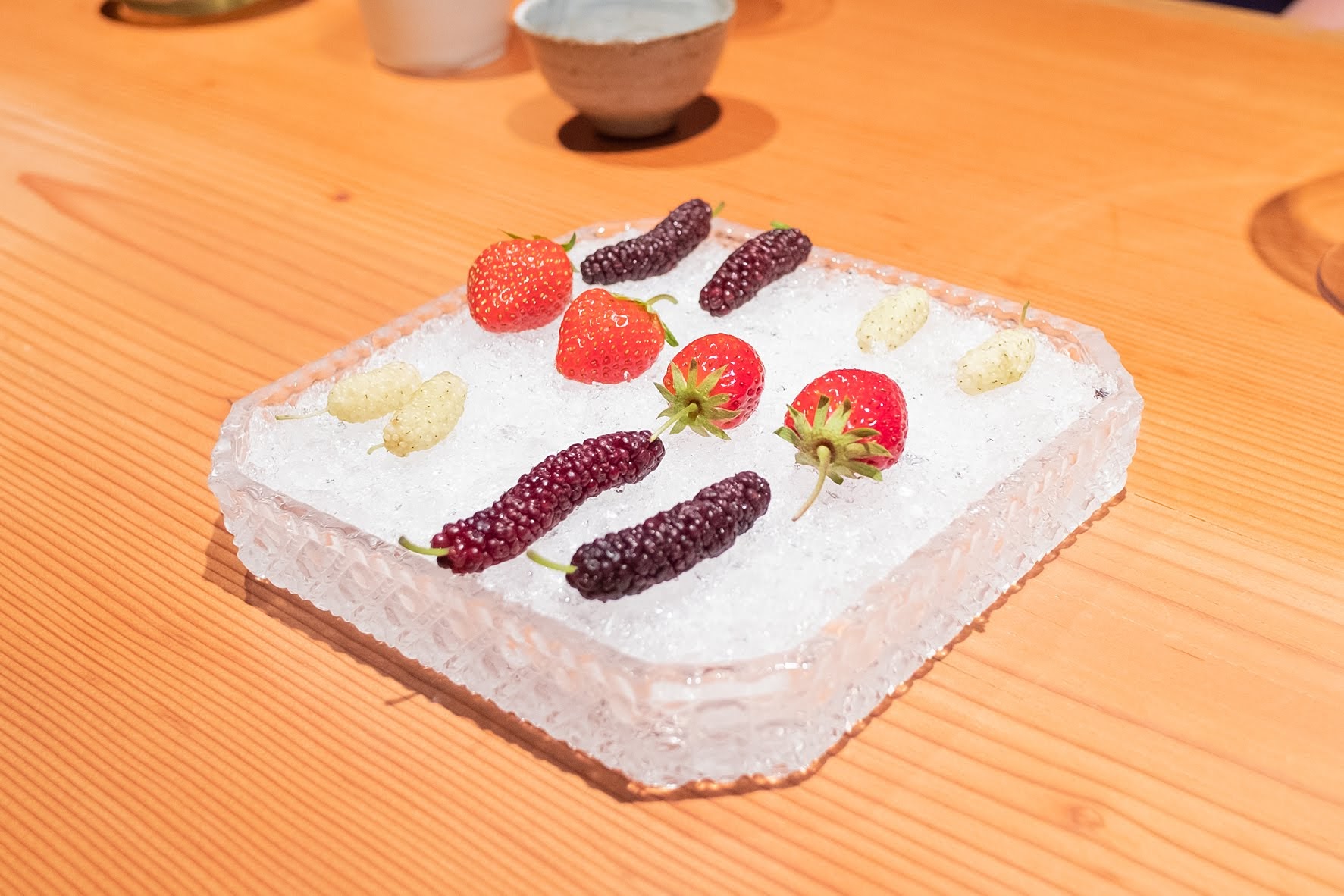 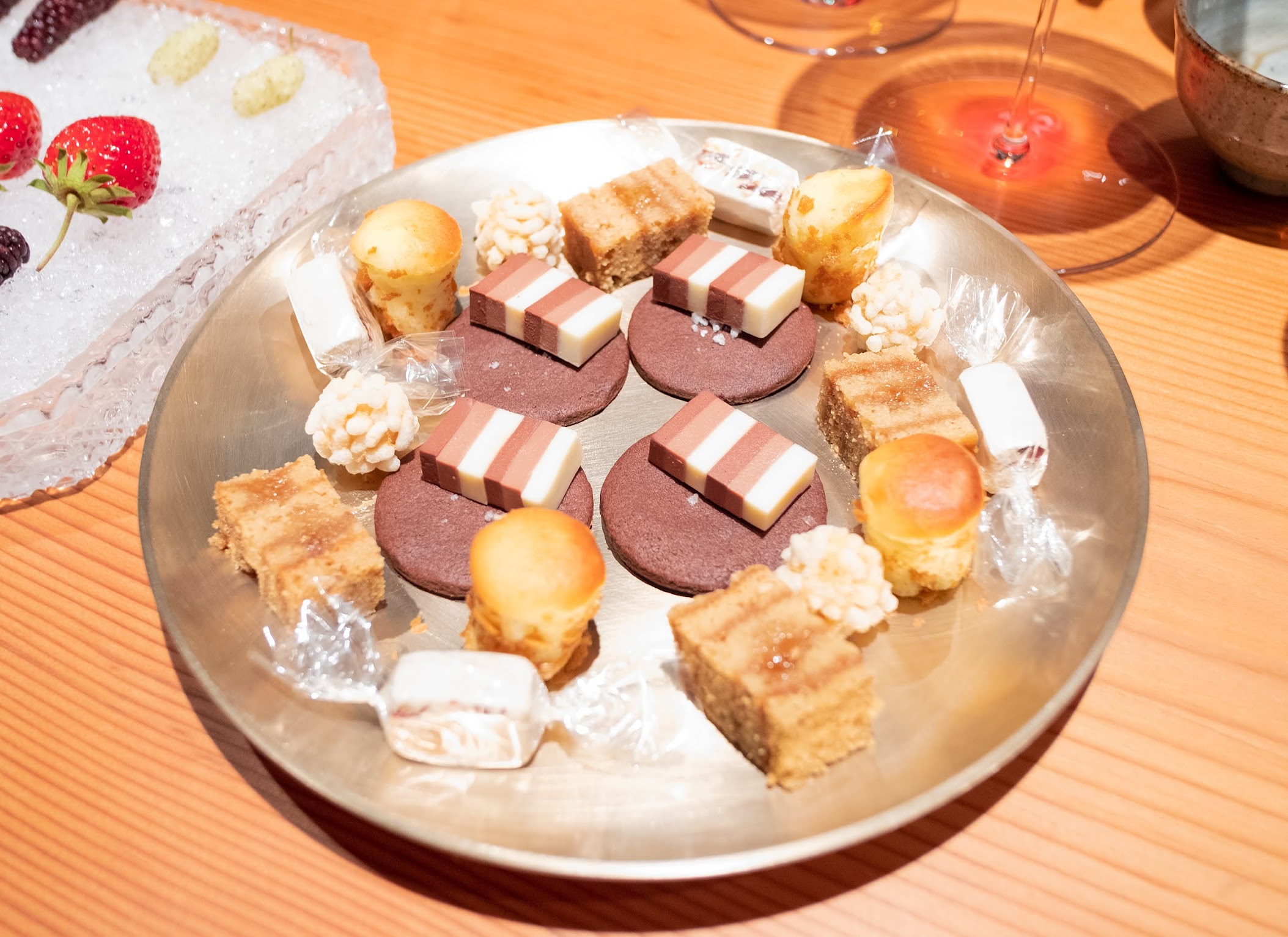 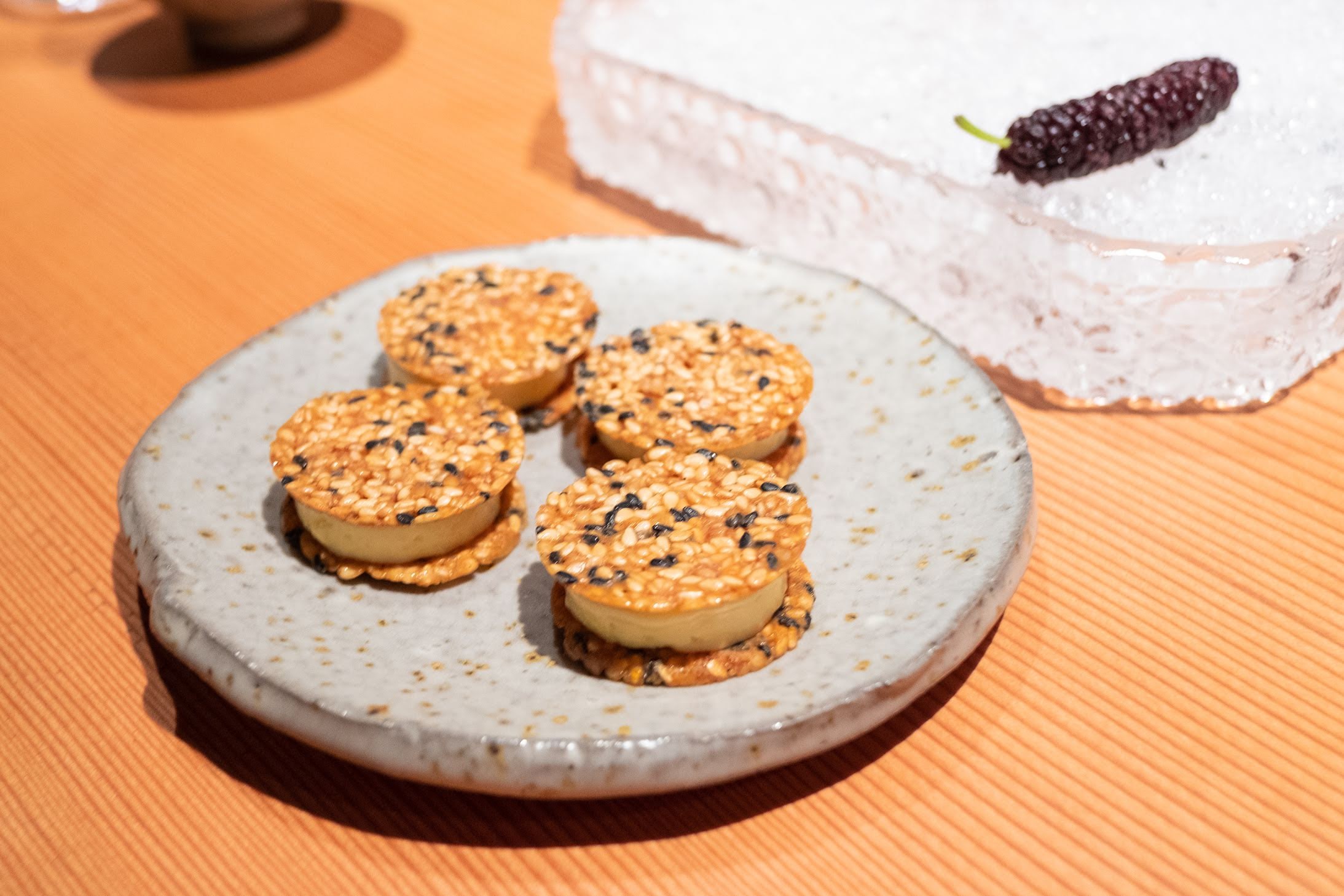 Mignardises
Three platters of mignardises ended our meal – my favourites being the simple selection of fresh fruit, a rocher made with makgeolli, and discs of ginger ice cream sandwiched between sesame seed crisps.

There was a celebratory atmosphere to the meal, as Maum had received its first Michelin star in the California guide the week prior – well deserved, I believe. Festivities aside, tonight’s was a strong and well-designed menu, showcasing the strengths of each kitchen equally. Some courses (e.g. the lasagna and tiramisu) would have benefited from more fine-tuning, but others (e.g. the somyun and gamjatang) hit very high notes. I still need to visit the restaurant for a “normal” dinner… if only they would fix their reservation policy to accommodate solo diners.