Thomas Frebel was a core member of noma for many years, serving as its head of R&D, and now he has made a home in Tokyo. With him, he has brought a group of ex-noma team members and other “nomads”. I skipped noma’s 2015 residency at the Mandarin Oriental in the city, so I was quite curious what a more permanent version of New-Nordic-meets-Japan might look like. This was a meal that came attached with a fair degree of anticipation.

First off, the whole space is gorgeous – expansive but understated, with lots of blond wood that perfectly blends Scandinavian and Japanese aesthetics. The furniture is super comfortable, both in the lounge and in the dining room proper. One receives the noma-style greeting from the whole team upon entry, and the menu begins quickly after being led to your (rather dramatically lit) table. 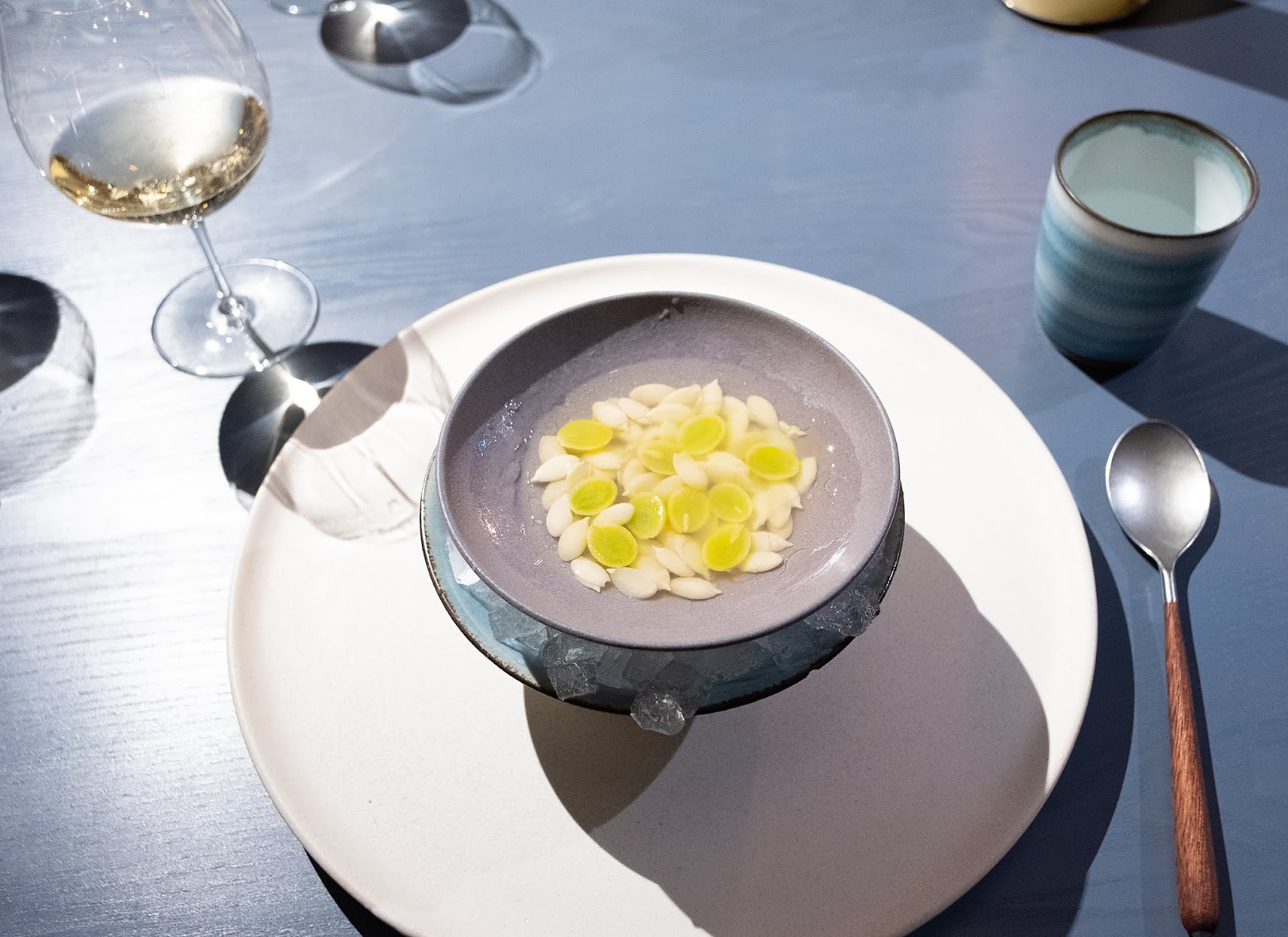 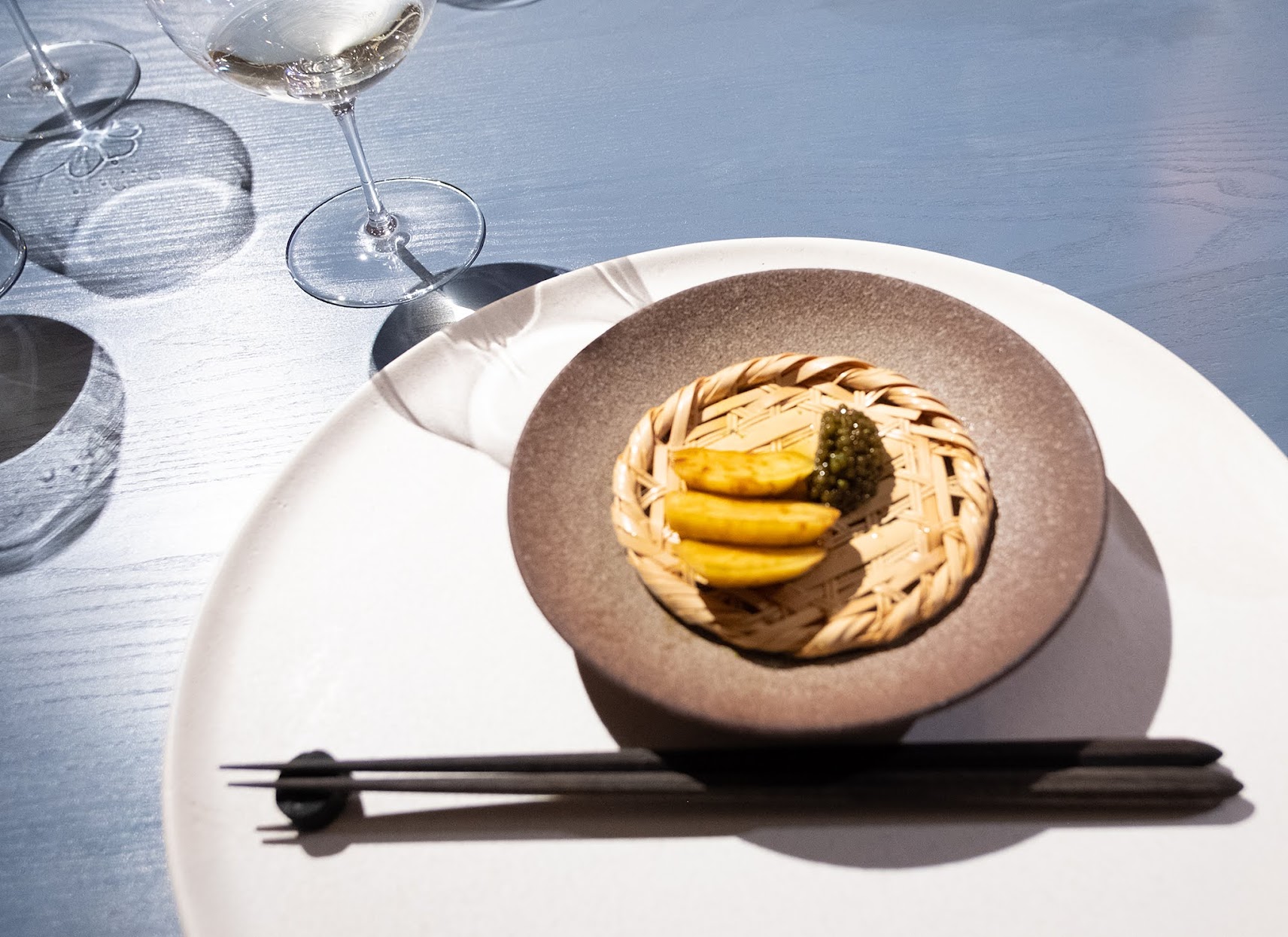 Chestnuts, warm seaweed butter, caviar
The chestnuts, blanched in fermented tofu water and then marinated in the same, retained a nice, crunchy texture without tasting raw. Their freshness nicely offset the rich umami of the caviar and seaweed butter. 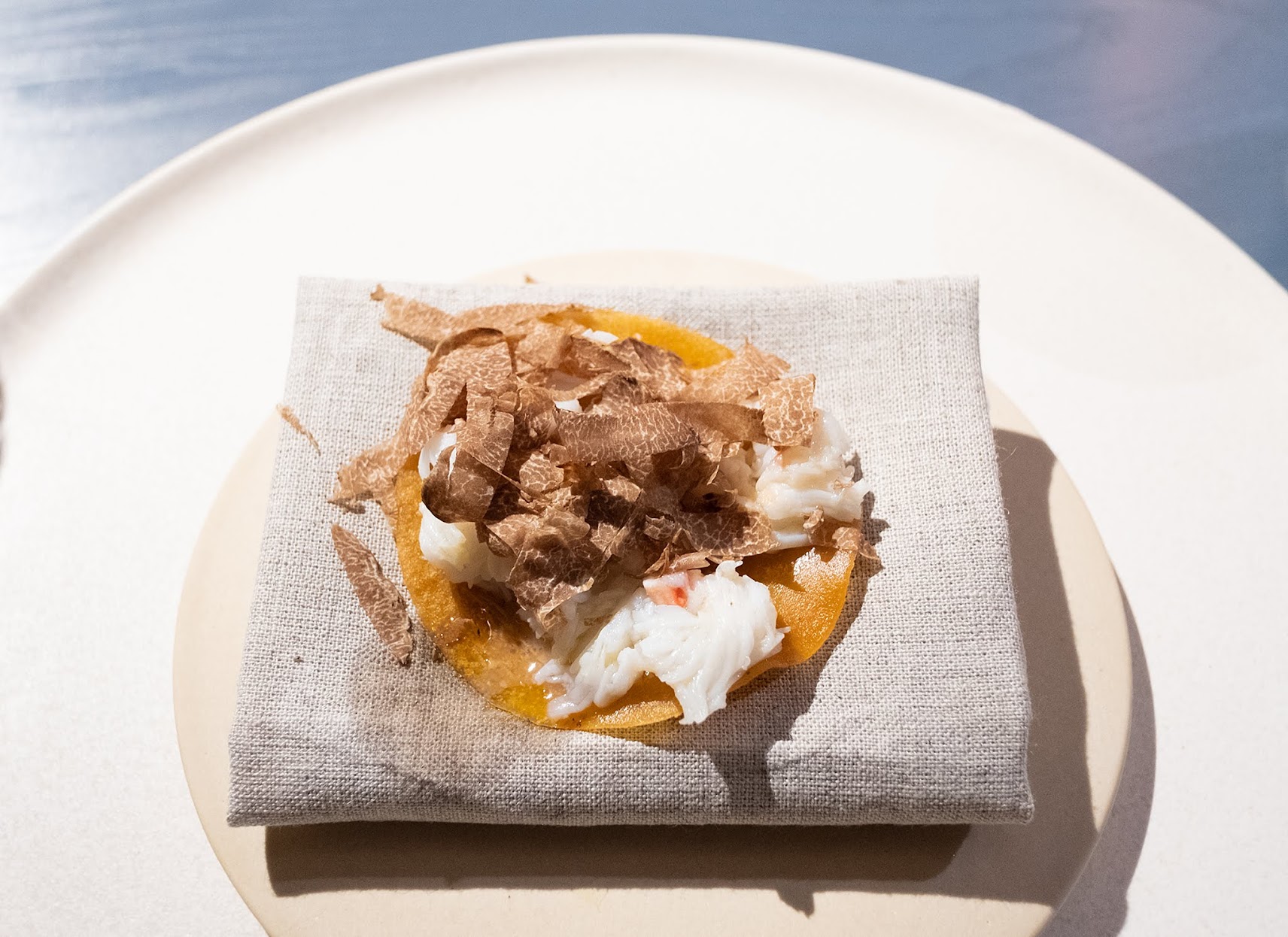 Steamed King crab, white truffle, miso-habanero crisp
Hard to go wrong with a combination like this – it was expectedly delicious. The use of Alba truffles seemed like a curious departure from the focus on Japanese ingredients – not sure what drove the choice. 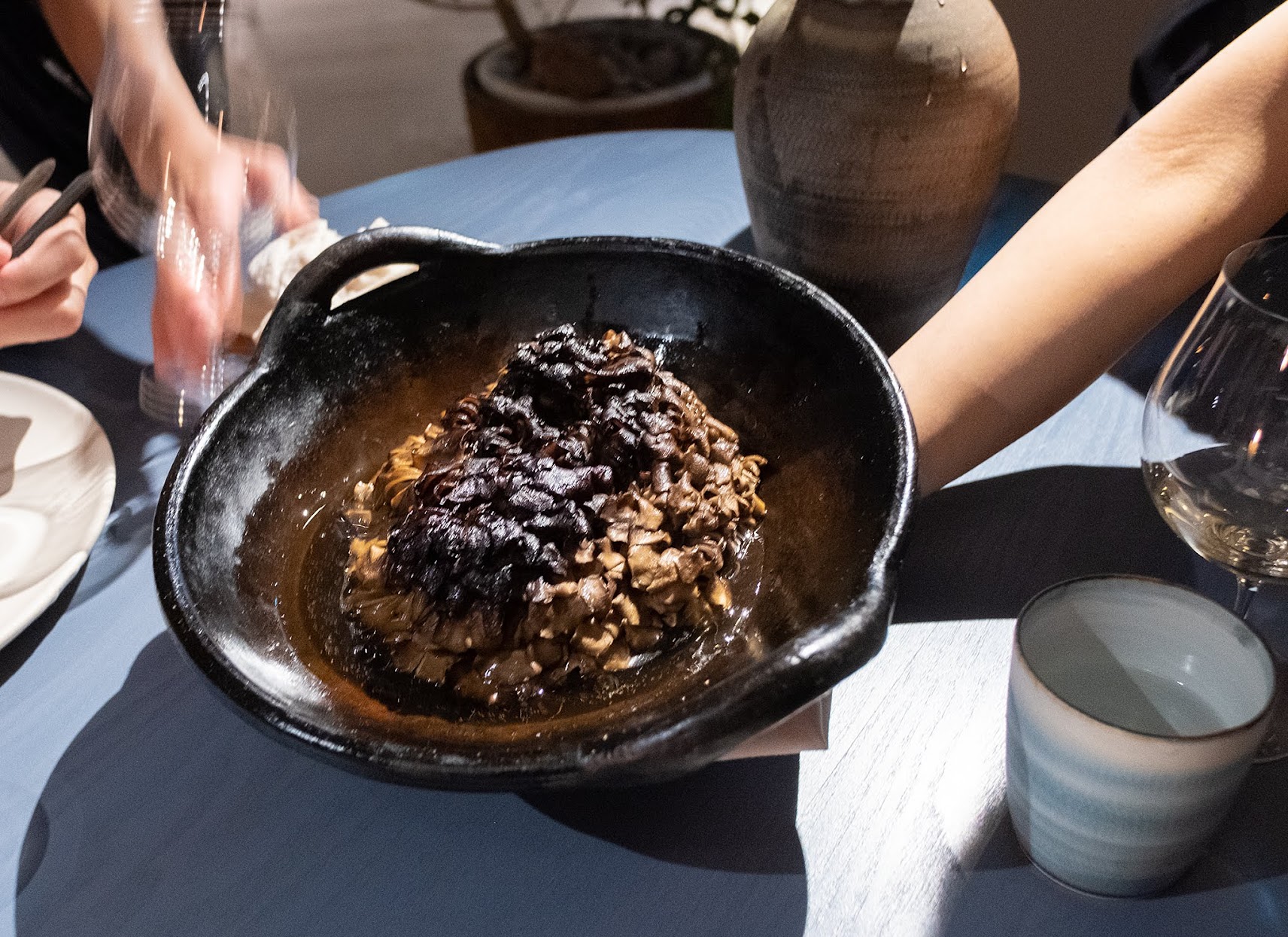 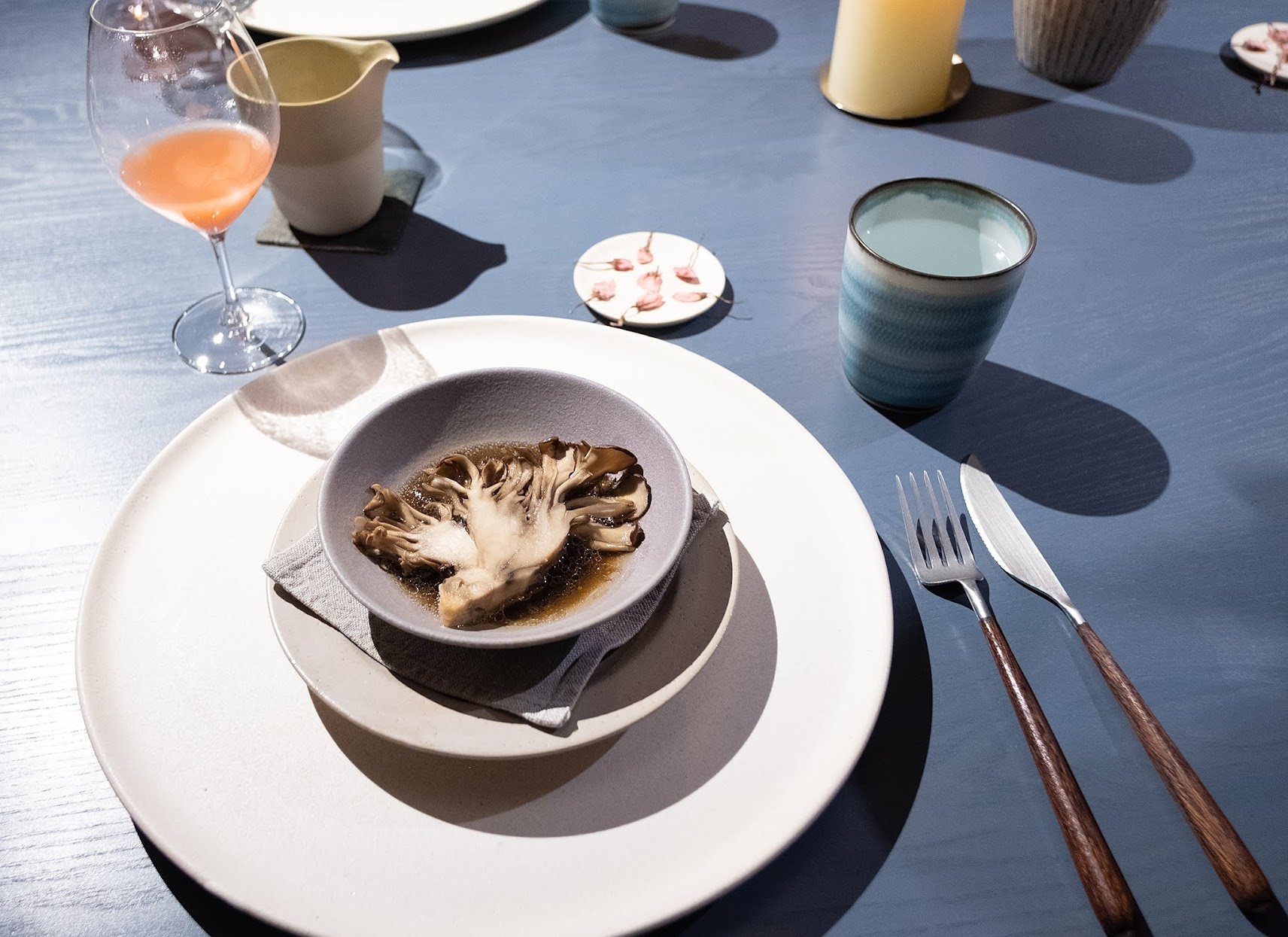 Smoked and braised maitake
Miso-pine broth, salted and dried cherry blossoms
I believe this maitake dish has been on the menu since the restaurant opened, making it somewhat of a signature. The huge mushroom is aged for 5 days and then smoked for 3-4 more. A thick slice is served with its liquid, enriched with miso, pine and koji – an umami bomb. On the side, we were presented with tiny buds of salted and dried cherry blossoms, to be crushed over the dish as seasoning. 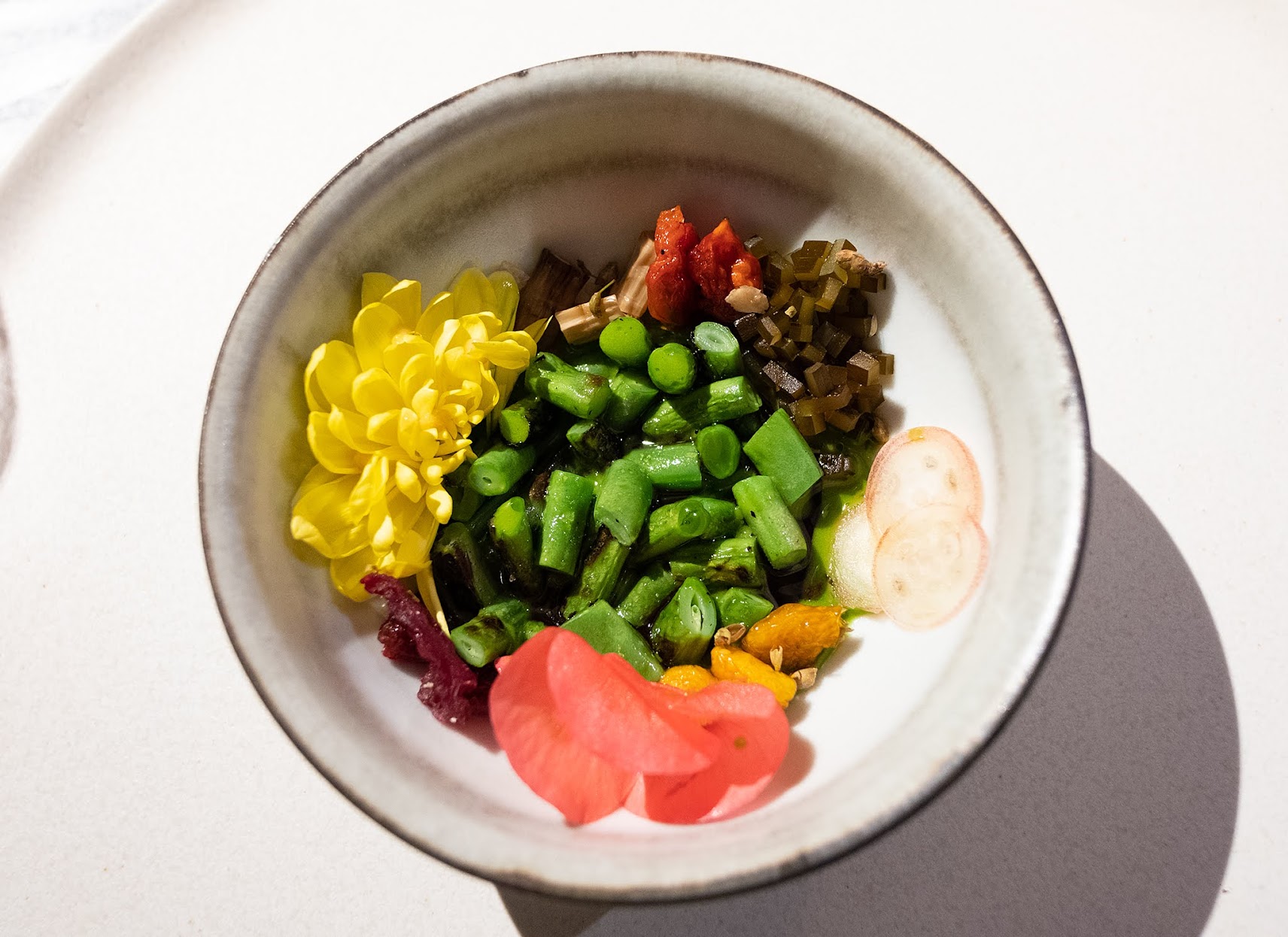 Grilled Hokaido snap beans and accompaniments
Starting from the top-left, the beans were accompanied by: chrysanthemum, pickled bamboo, dried smoked tomatoes, rishiri kombu cooked in mushroom broth, myoga, dried physalis, begonia flower, and lacto-fermented plum. Underneath it all was a pool of lovage sauce and yeast reduction. Tasting all of the different flavour combinations was exciting and invigorating – one of my favourite courses this evening. 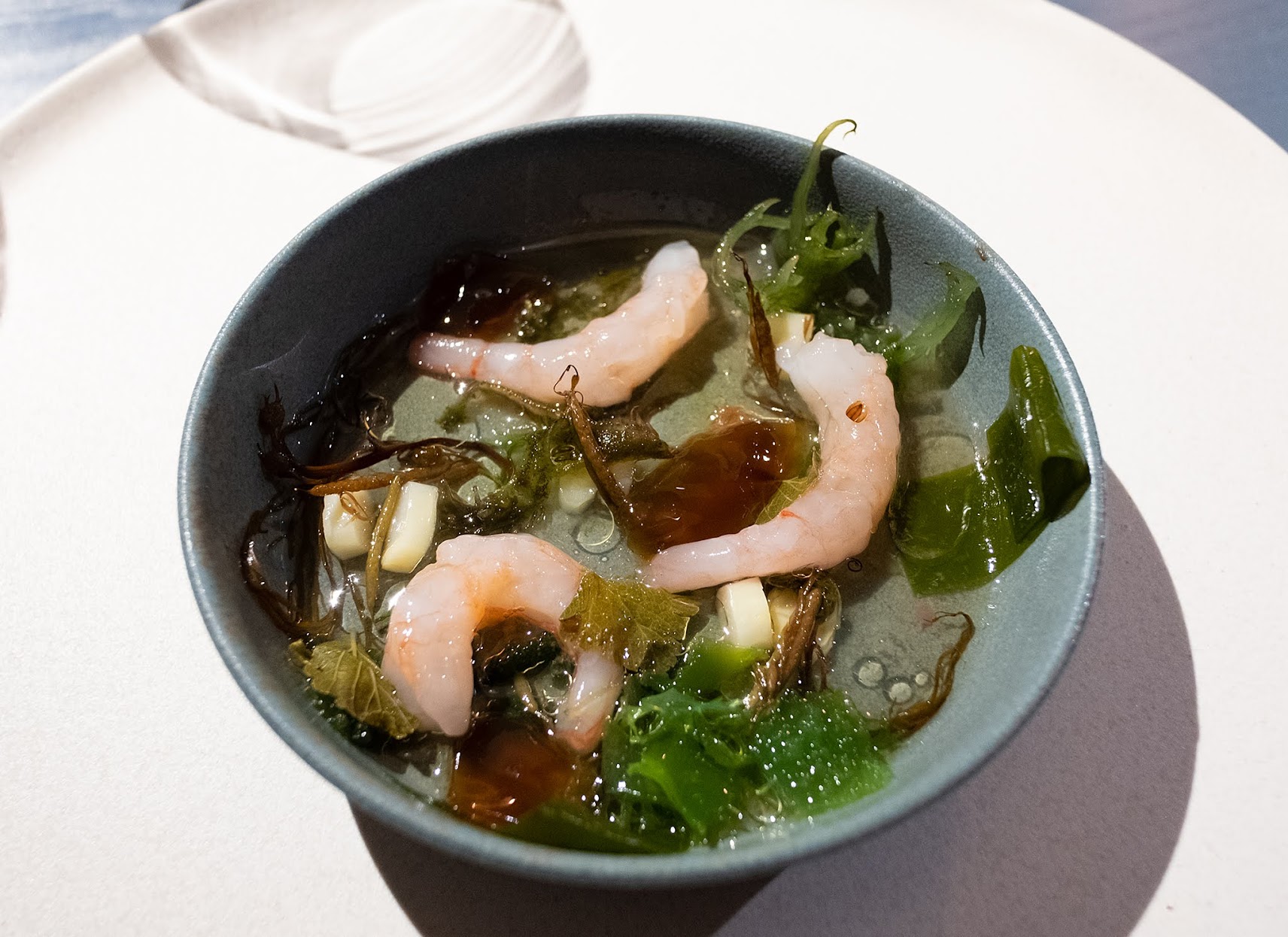 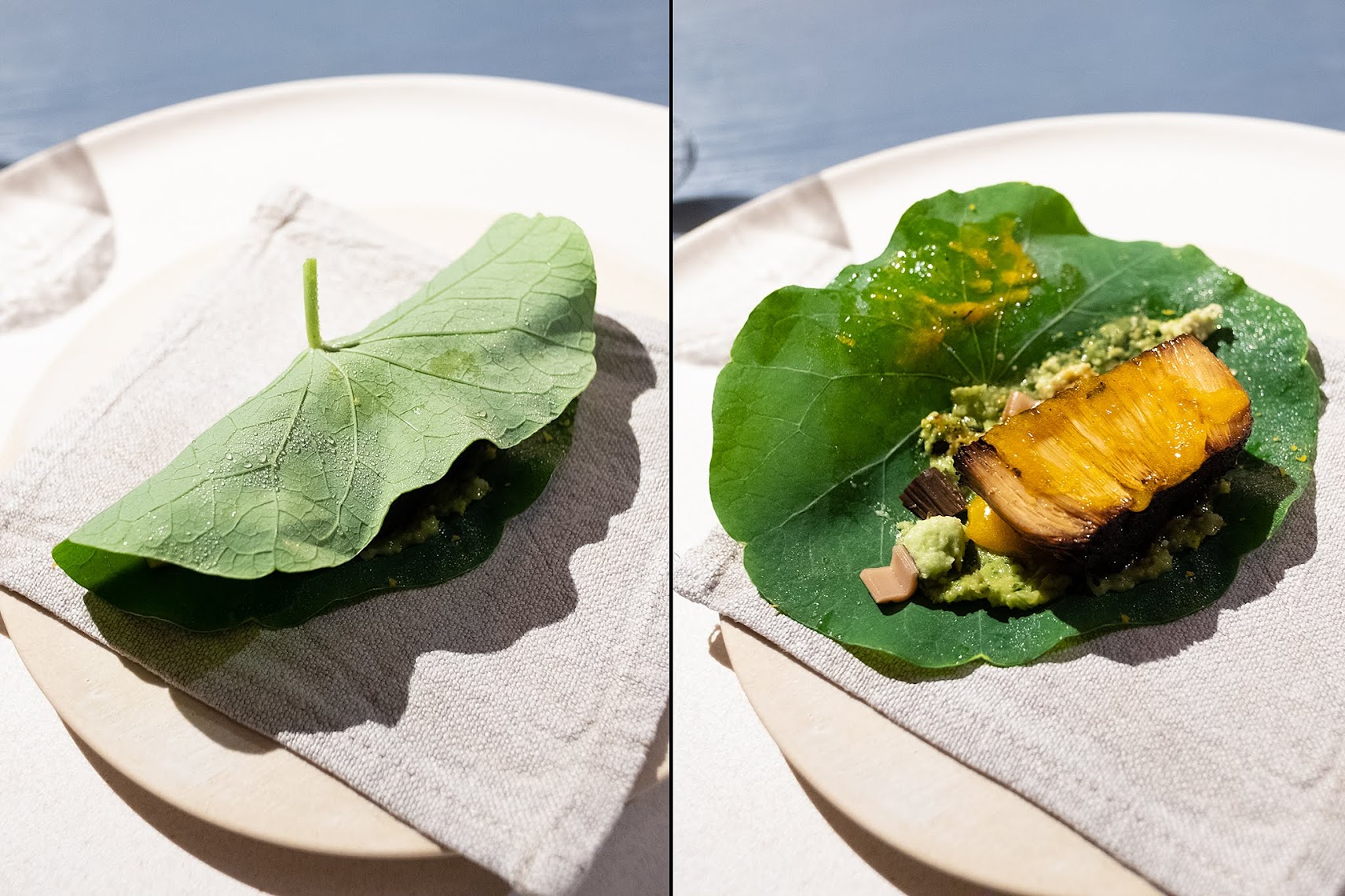 Grilled enoki mushroom root
Nasturtium, wasabi, pickled bamboo, egg yolk sauce
The hunk of enoki was essentially our meat course for the evening. It was paired with a thick paste of gingko nuts, sansho and yuzu – at once earthy and acerbic. The egg yolk sauce added to the richness of the dish. Very delicious. 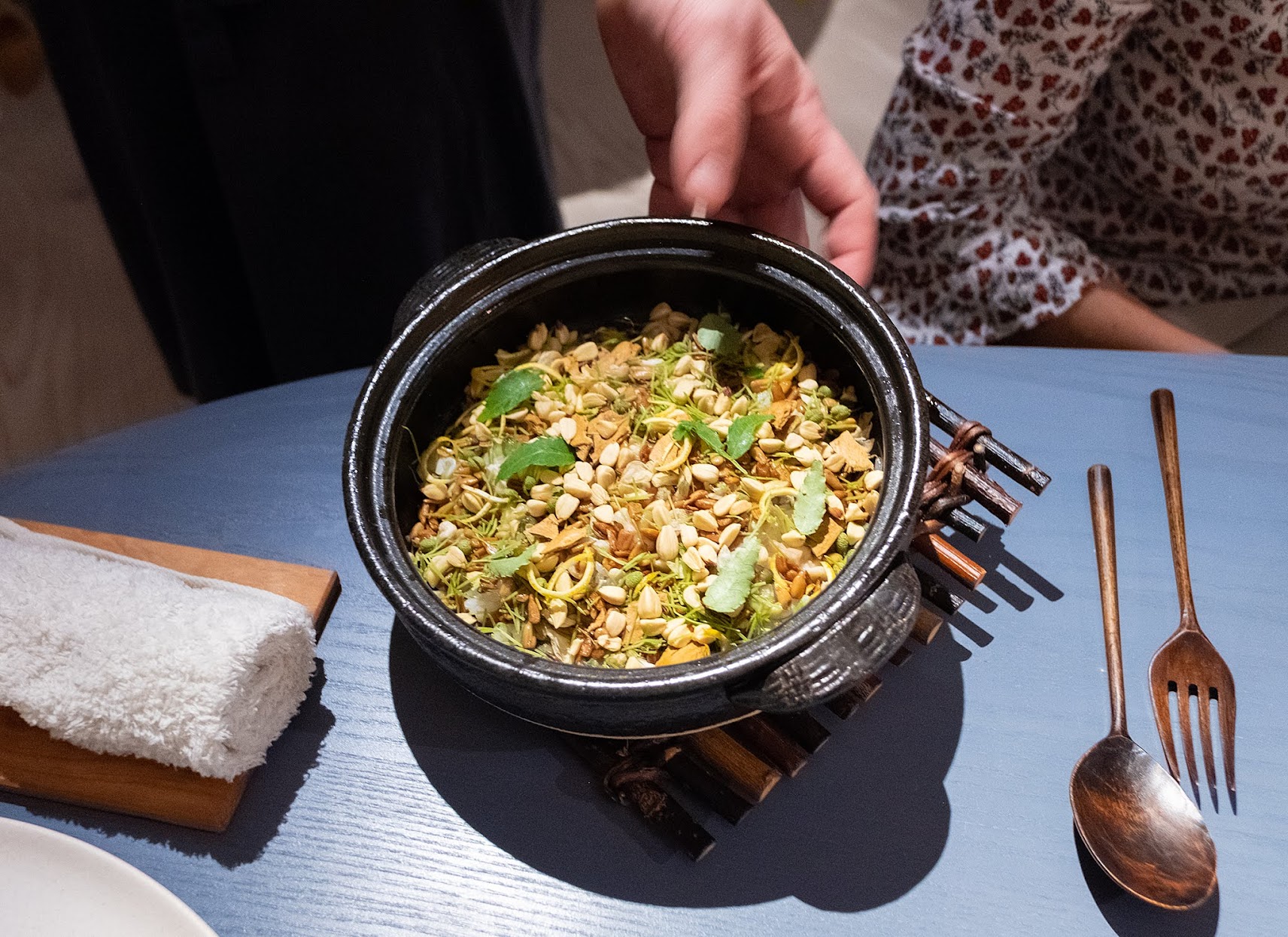 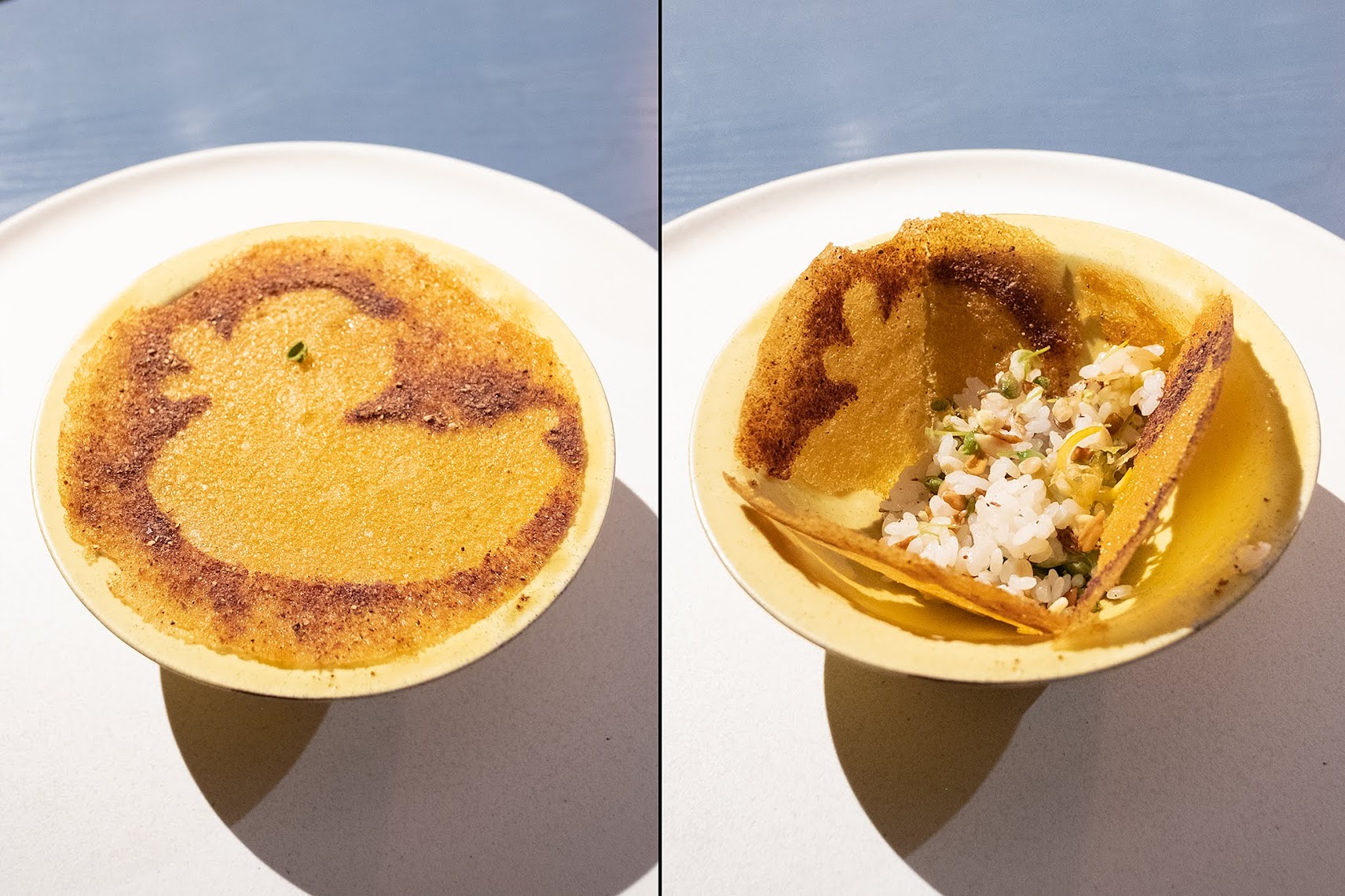 Rice, beech nuts, sunflower seeds, forest spices
The rice was spooned into a bowl with a duck crisp “lid”, shattering it in the process. There was a heavy element of sansho in the rice that left my mouth tingling. I suspect it was required to offset the surprising richness of the rice, which was quite oily. 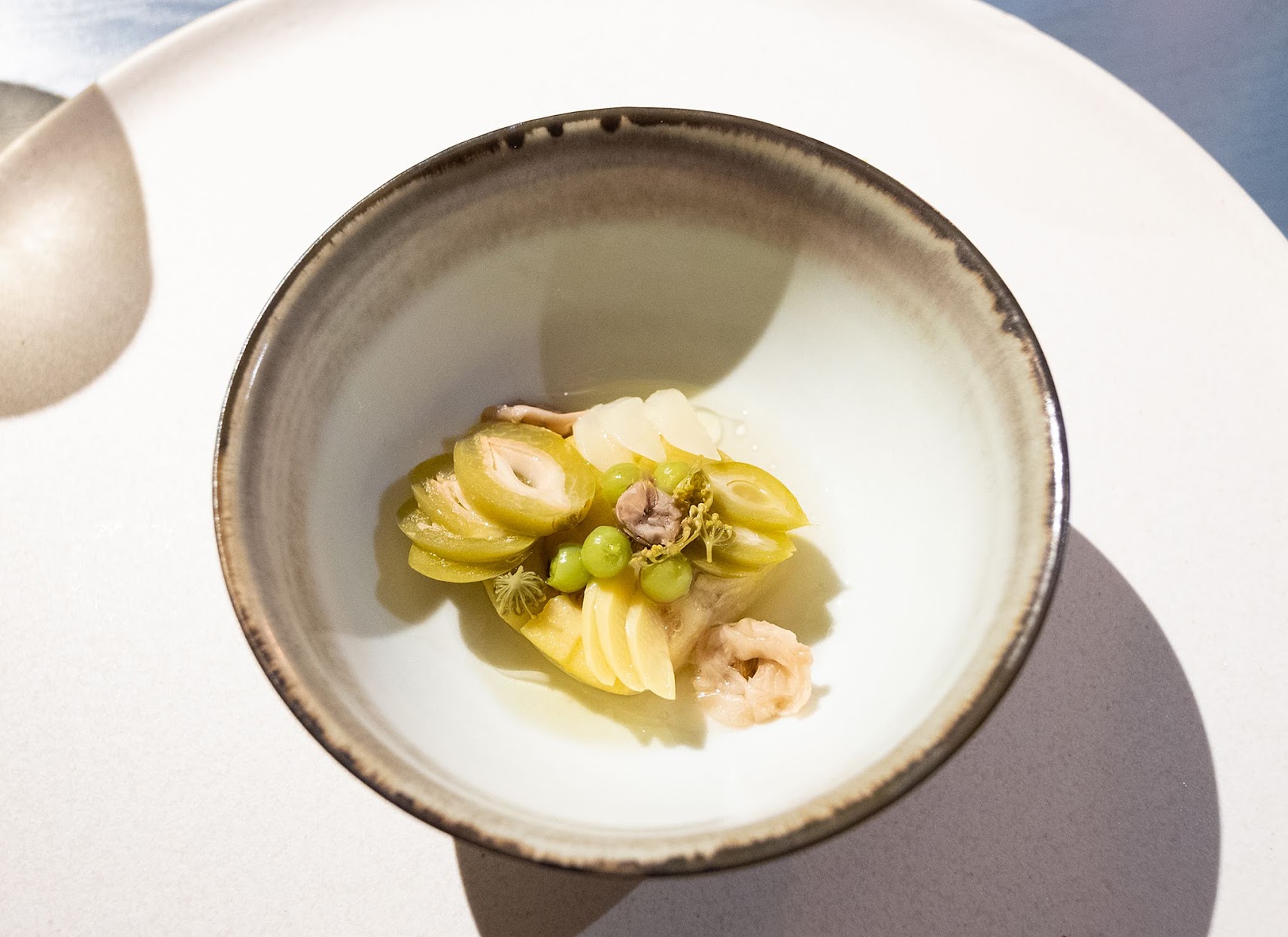 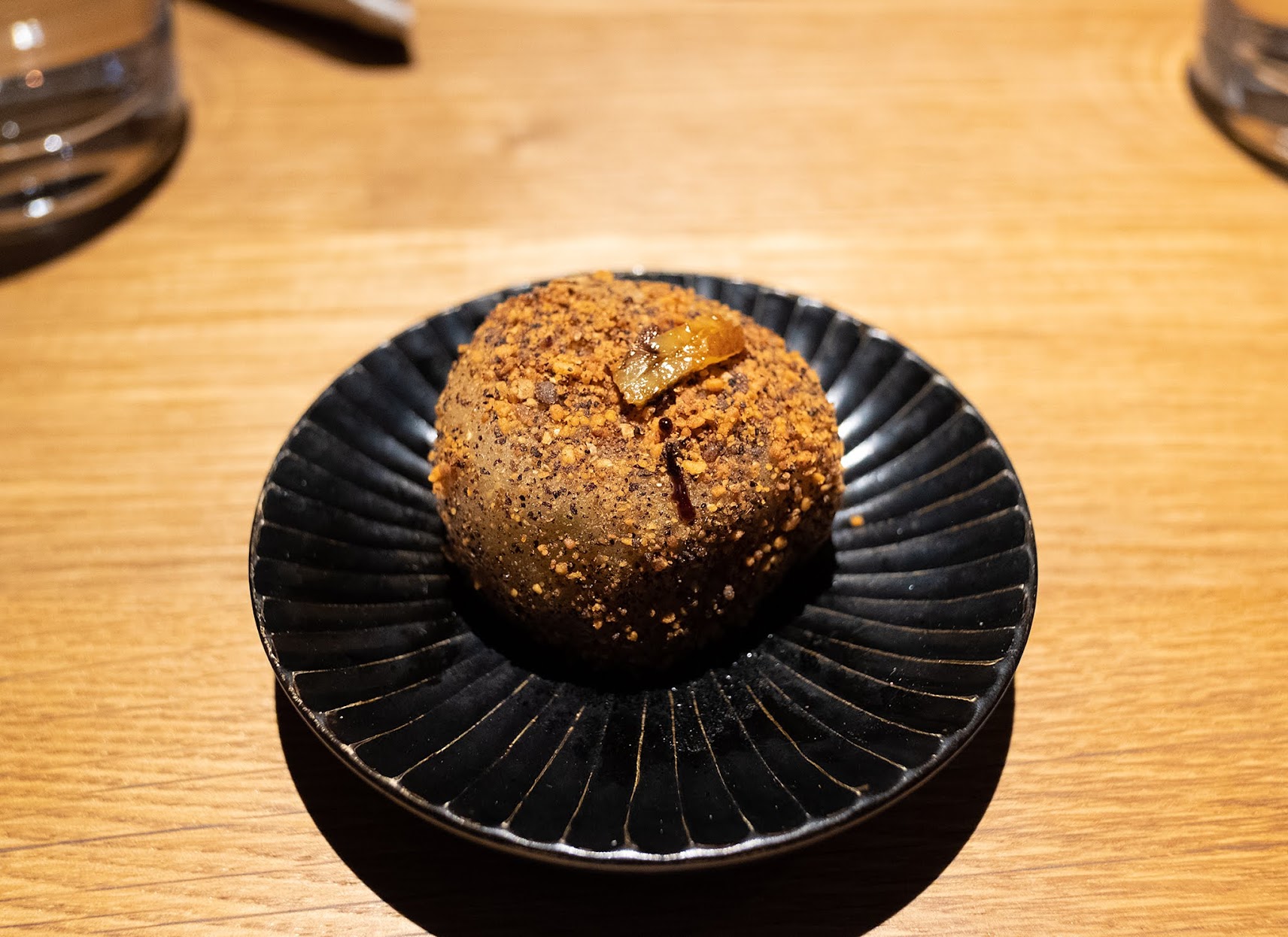 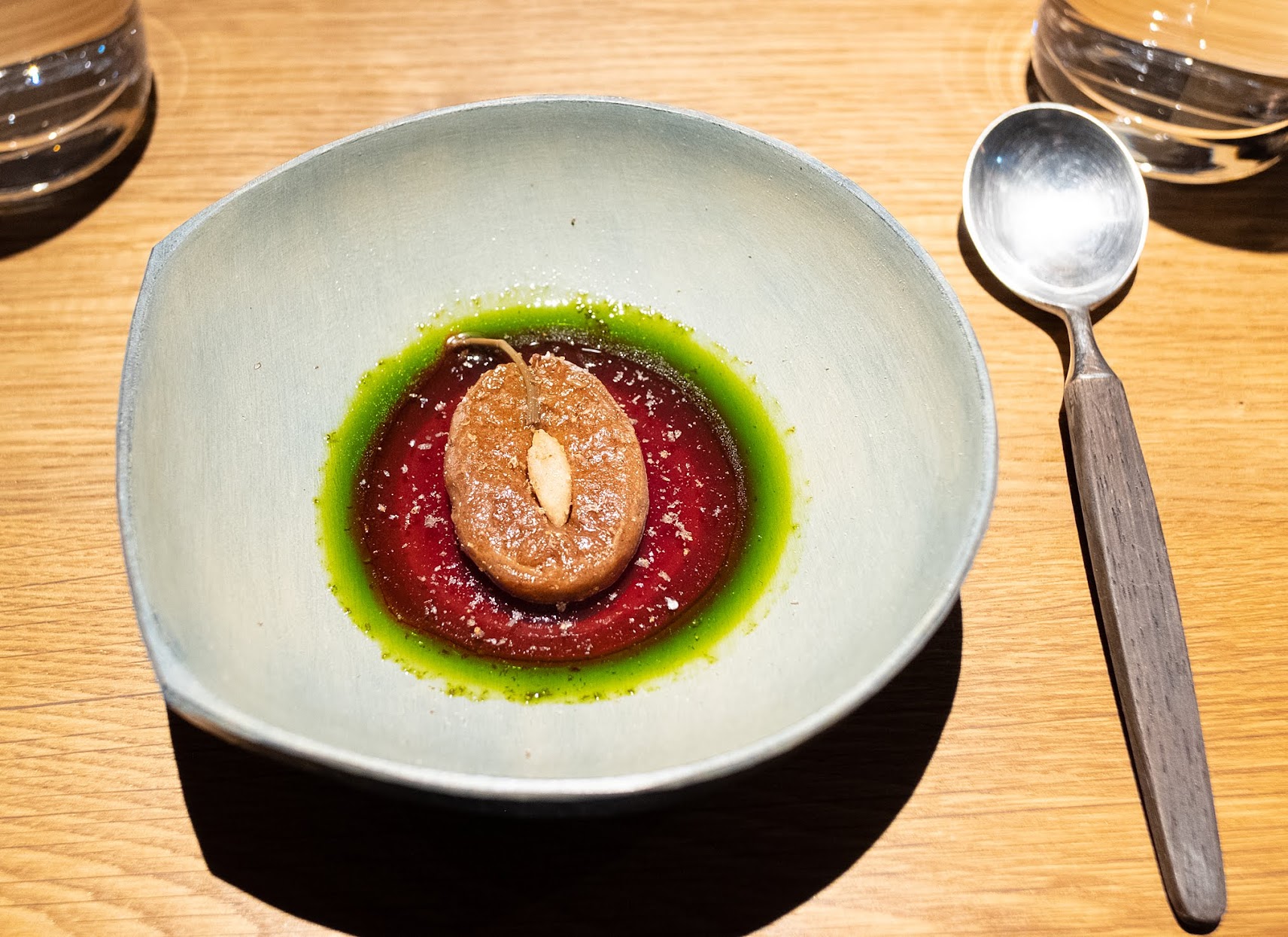 Japanese stone fruits, fig leaf oil
Three stone fruits were featured: (1) dates, soaked in rose kombucha and pureed; (2) plums, juiced and turned into a gel; (3) peach, fermented until its flesh turned dark. This course had so much complexity despite the high sweetness level – wow. 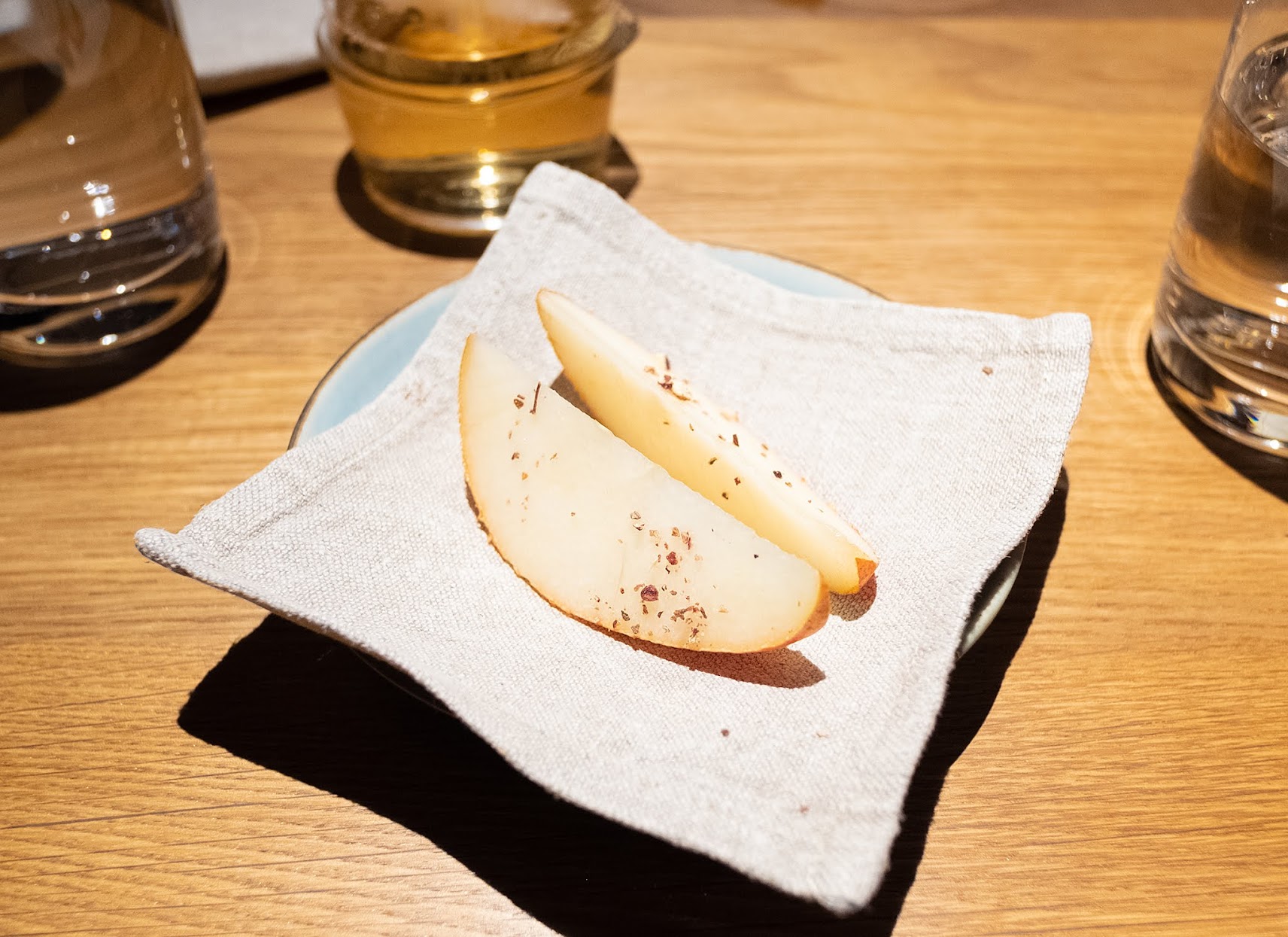 Did I mention that the entire menu, from start to finish for our five-top, took under 2 hours? The kitchen seemed rather rushed and flustered this evening, and service also suffered as a result of the pace – flatware was misplaced once, and we missed a few dish and drink descriptions and had to ask. The food is ambitious (although not plentiful – it’s a good thing I’d eaten a fair bit before dinner), with some strong highlights like the King crab, enoki and all the desserts. I see a Michelin star or two in their future once their kinks are worked out, but five months in, Inua is still very much a work in progress.