It’s hard to believe that our first (and only) visit to Lummi Island was two years ago – where has the time gone? More recently, we enjoyed Blaine Wetzel’s food at the three-way collaboration dinner with Smyth and Single Thread. This was sufficient motivation to plan a prompt return to his home base. The island itself feels like a place frozen in time – unchanging and untouched by proceedings on the mainland. The kitchen, however, has definitely evolved – it grows more ambitious with every passing year. 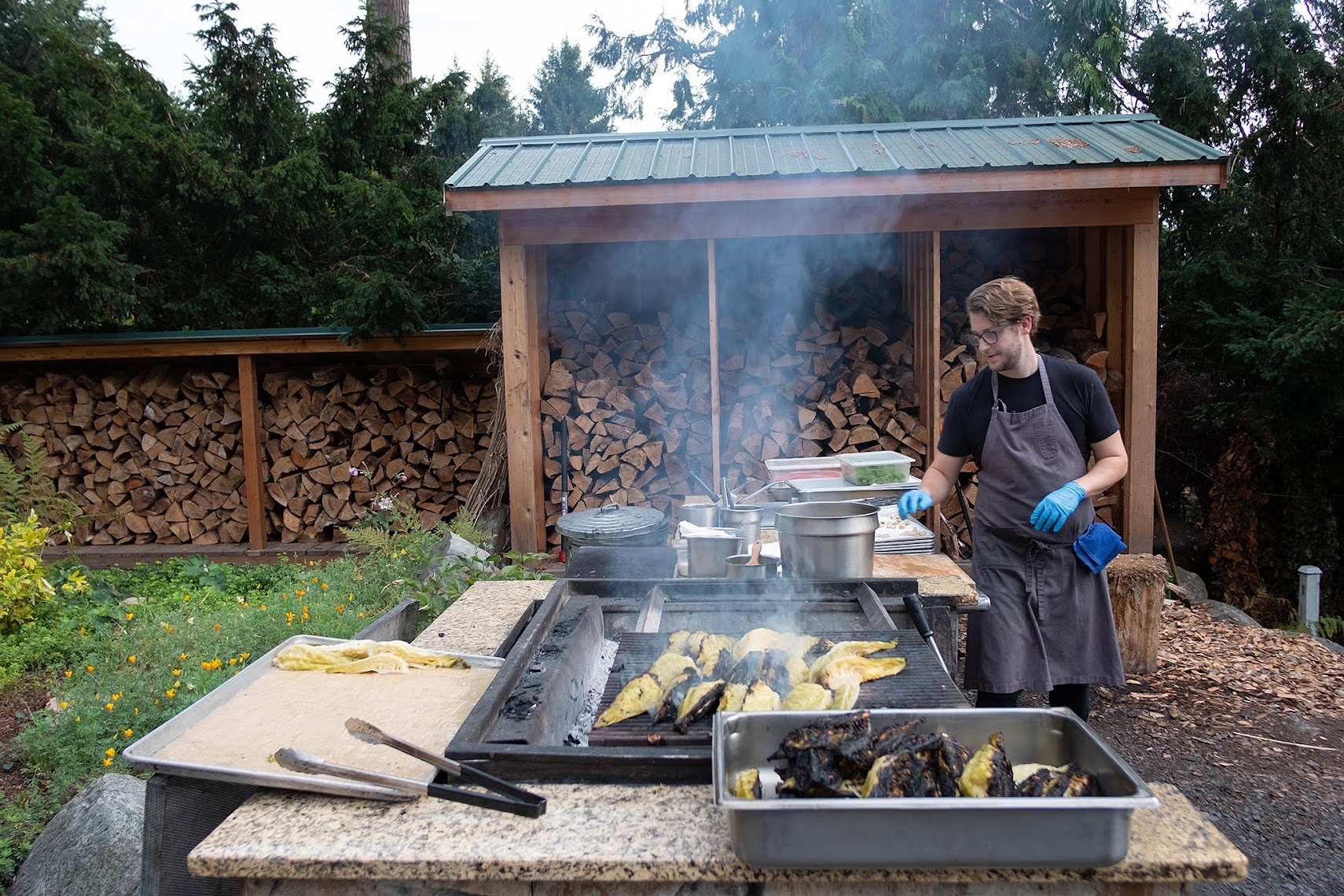 Caraflax cabbage and geoduck on the grill 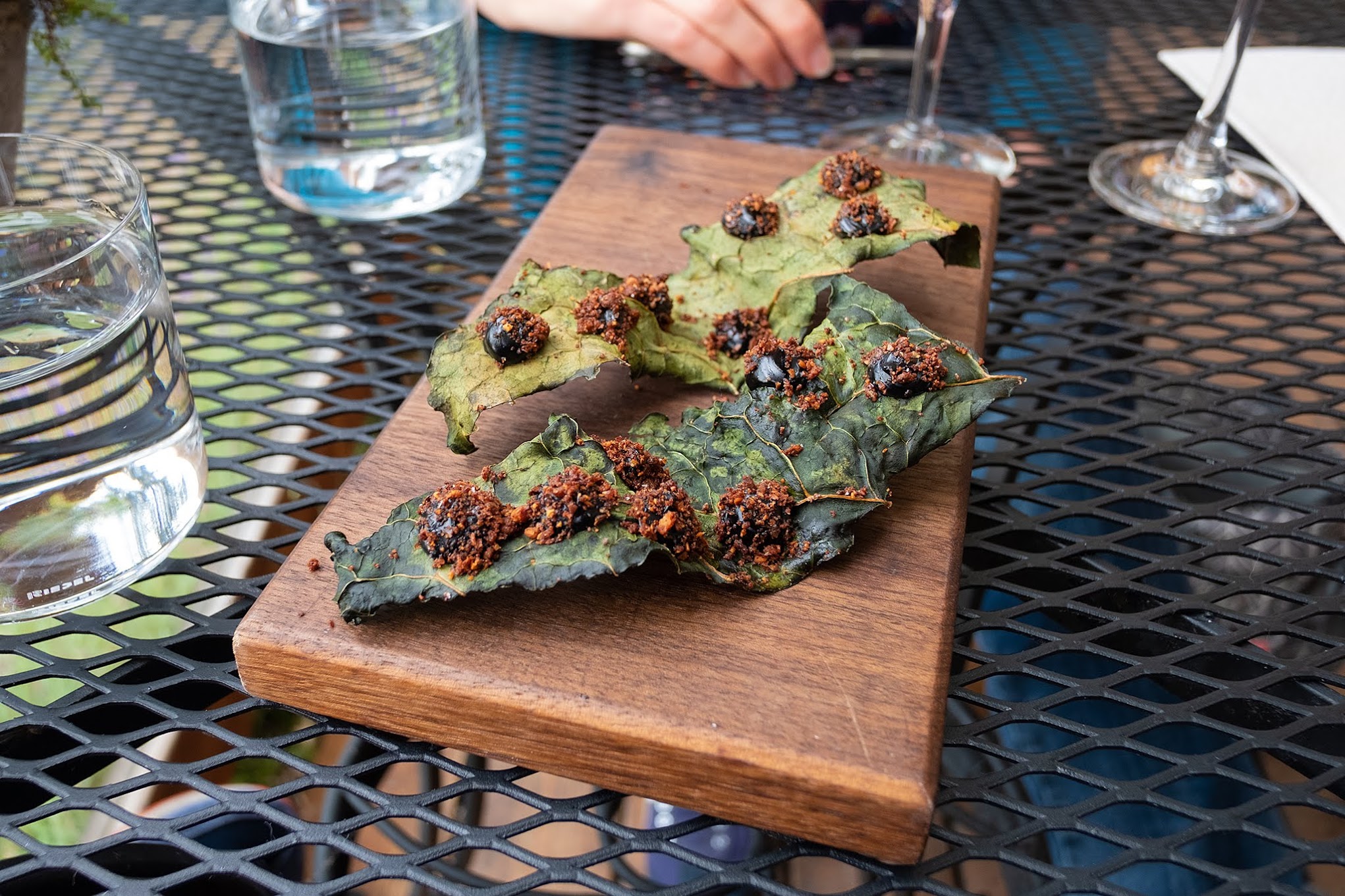 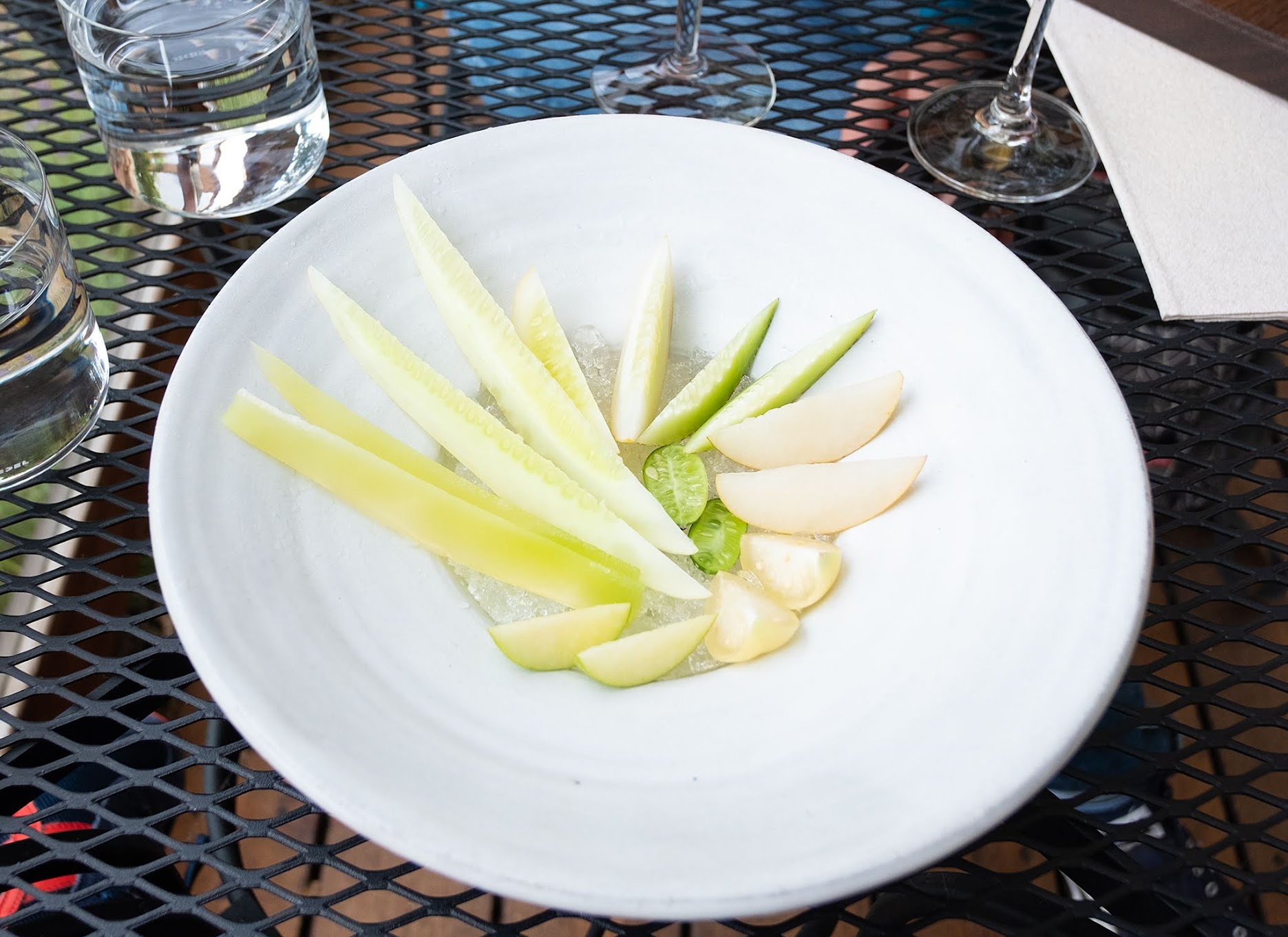 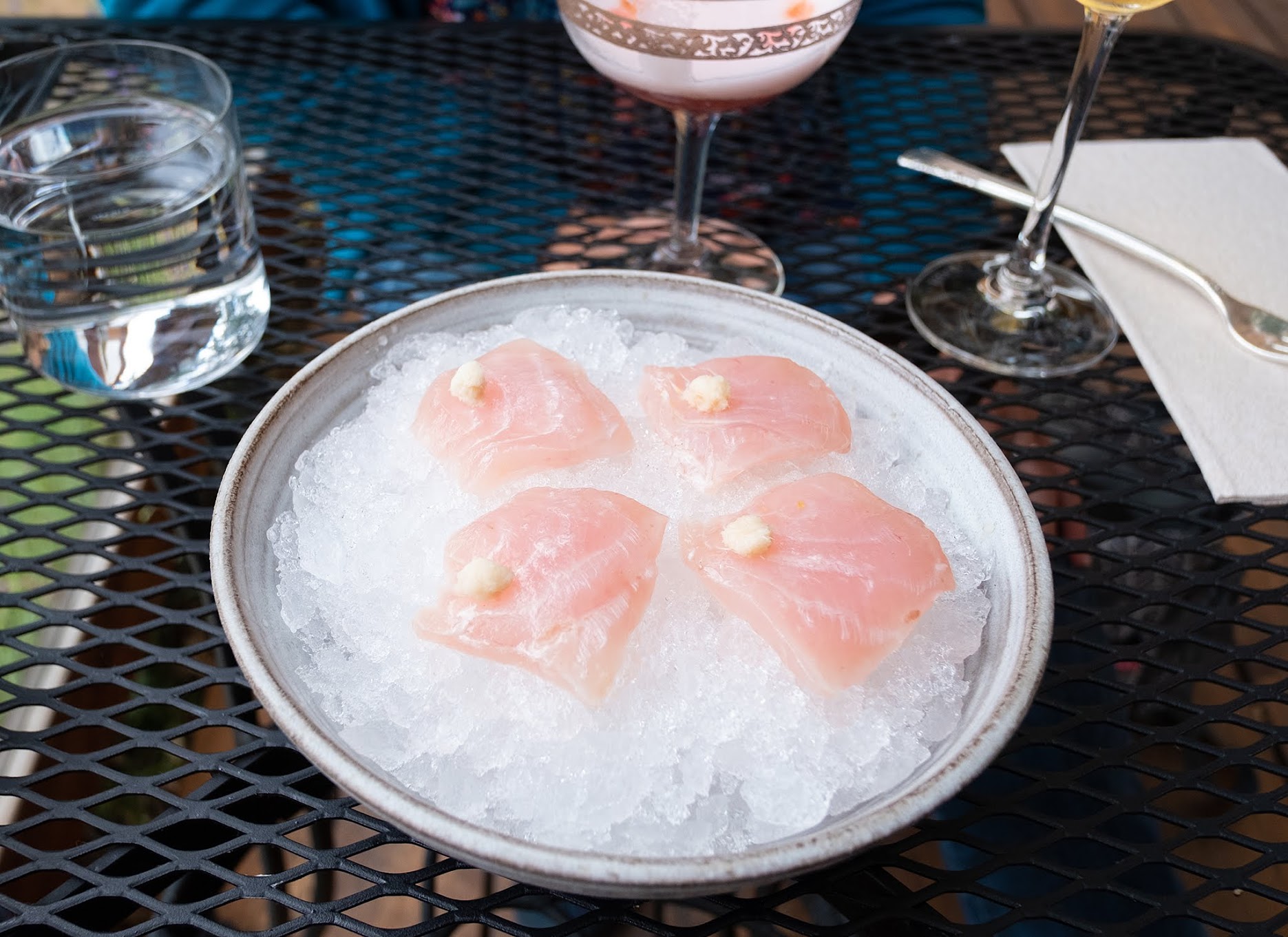 Opah, grated horseradish, umeboshi
A by-catch from the inn’s regular fisherman – this moonfish must’ve strayed pretty far from its normal waters. Gorgeous, supple texture – it paired very well with the tart umeboshi and the spicy horseradish. 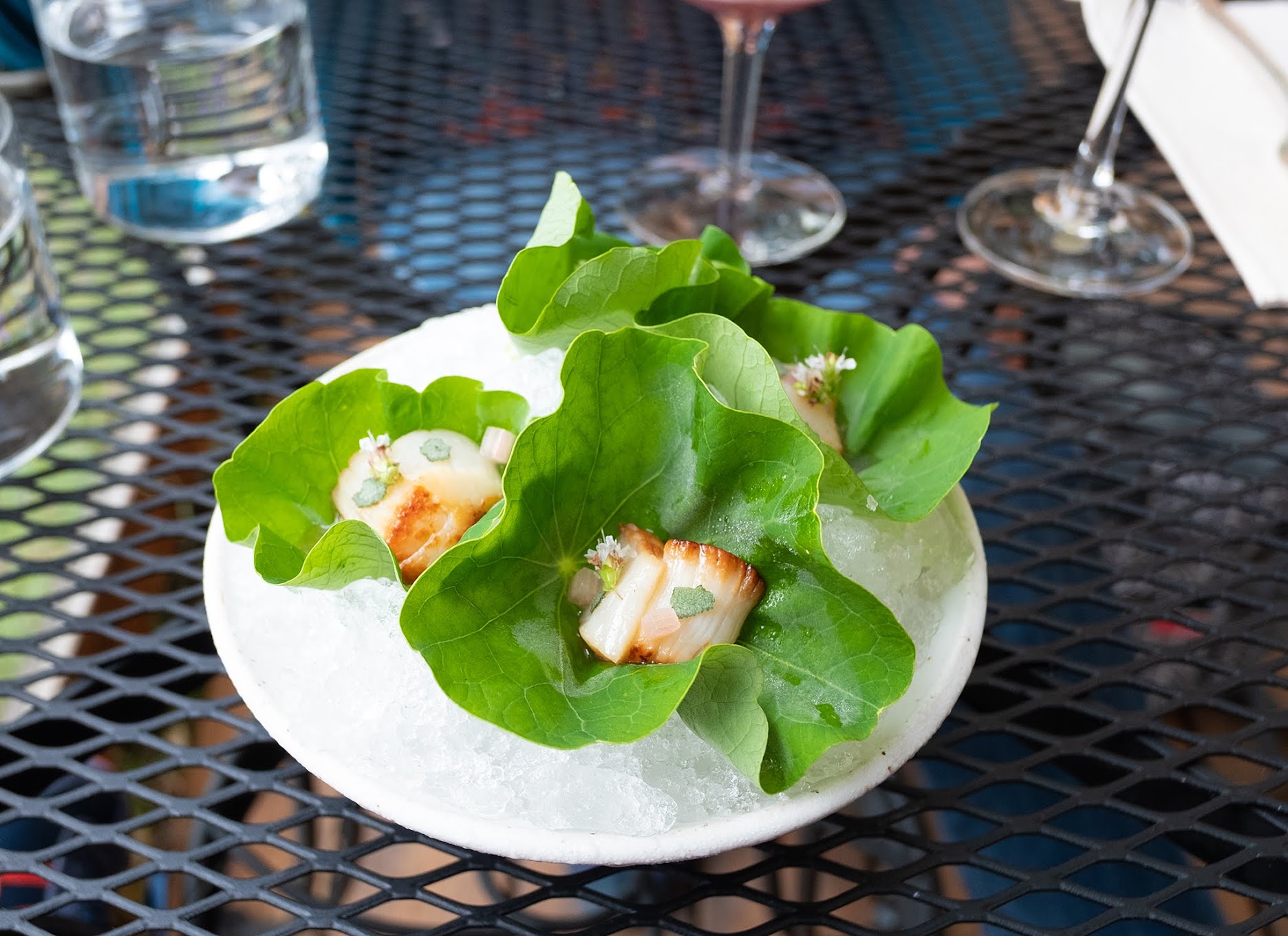 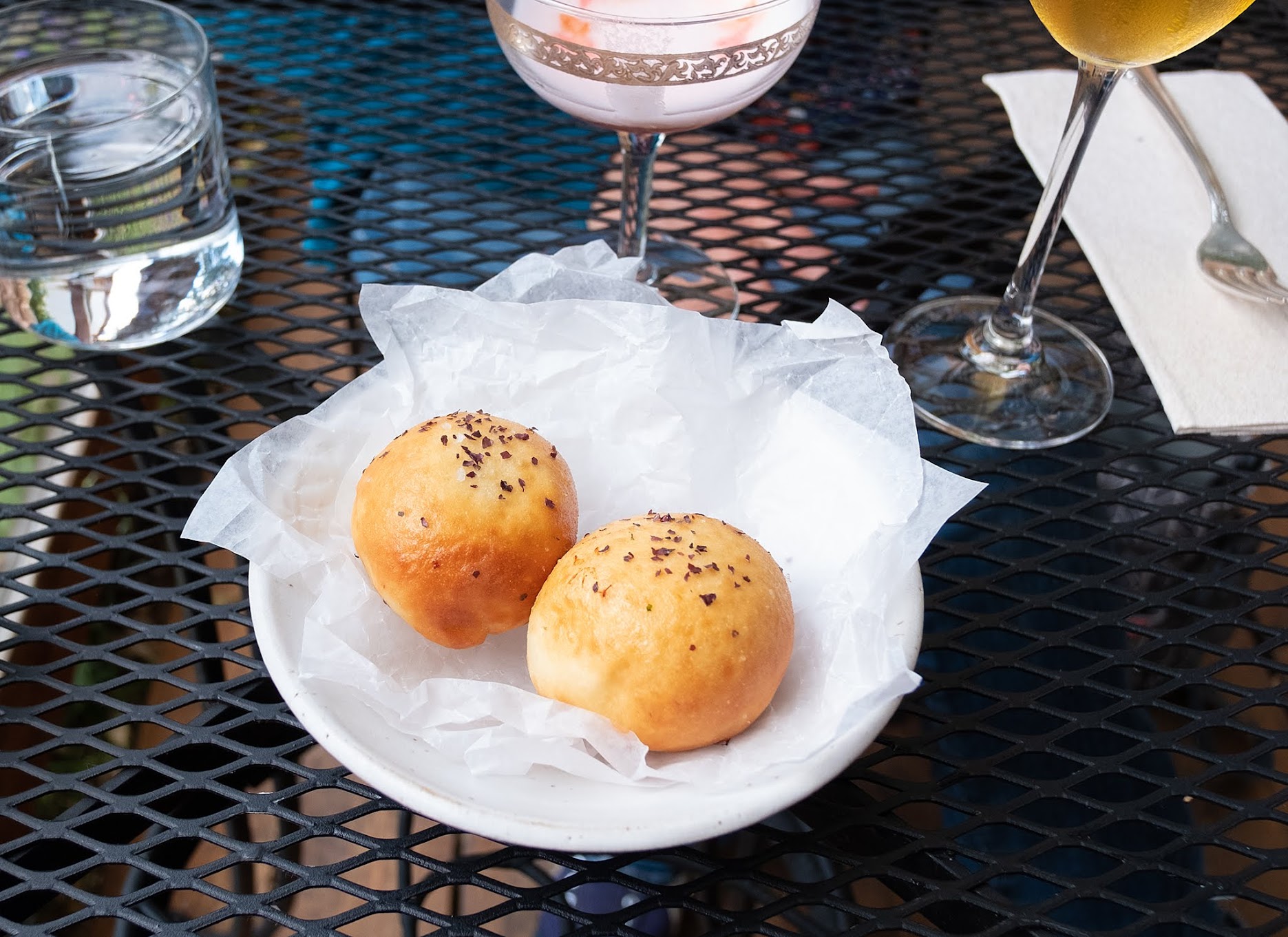 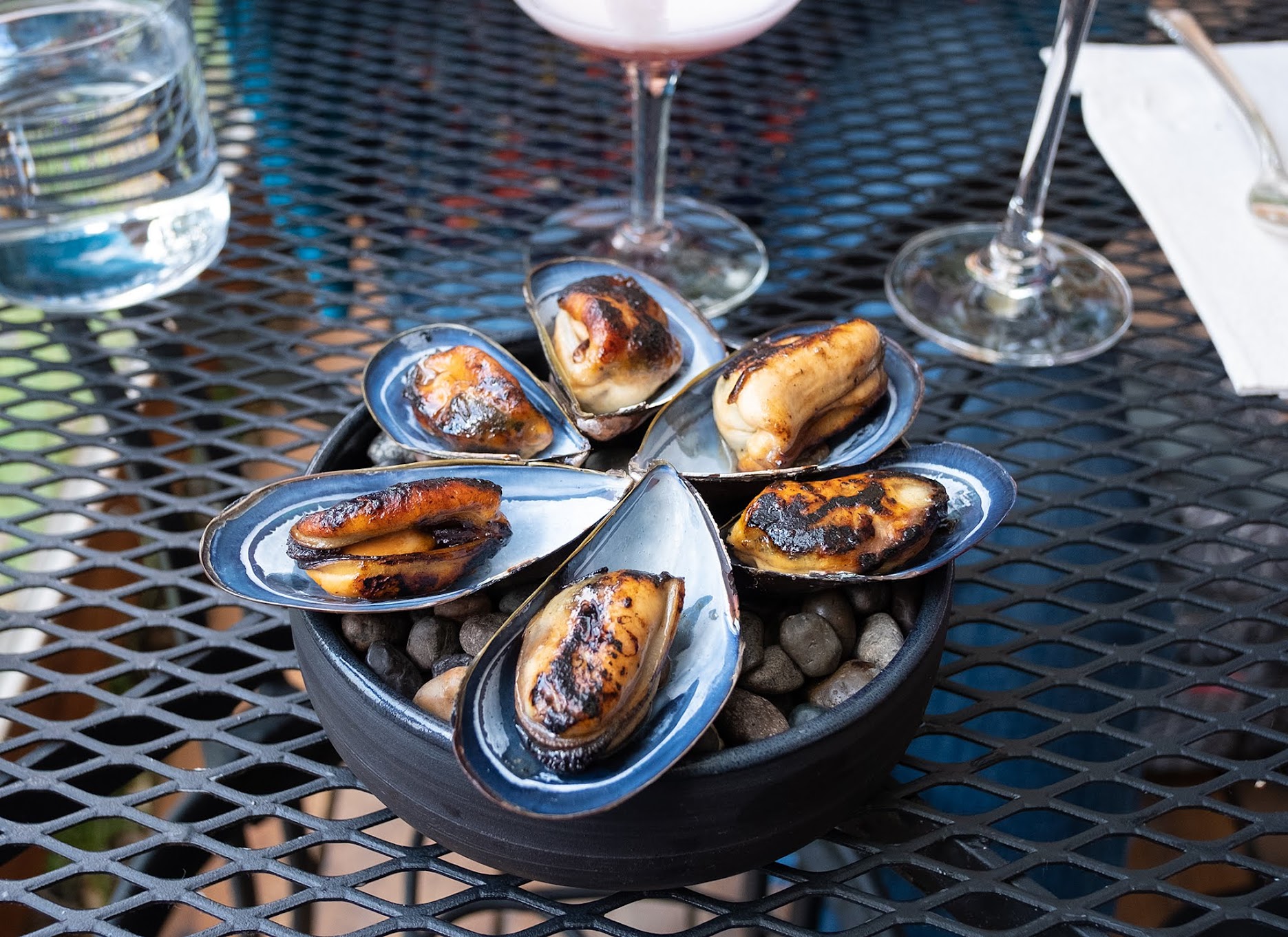 Caramelized mussels from the smokehouse
The mussels were affixed to their shells by an earthy purée of sunchoke. These were, quite frankly, some of the best mussels I’ve ever had. 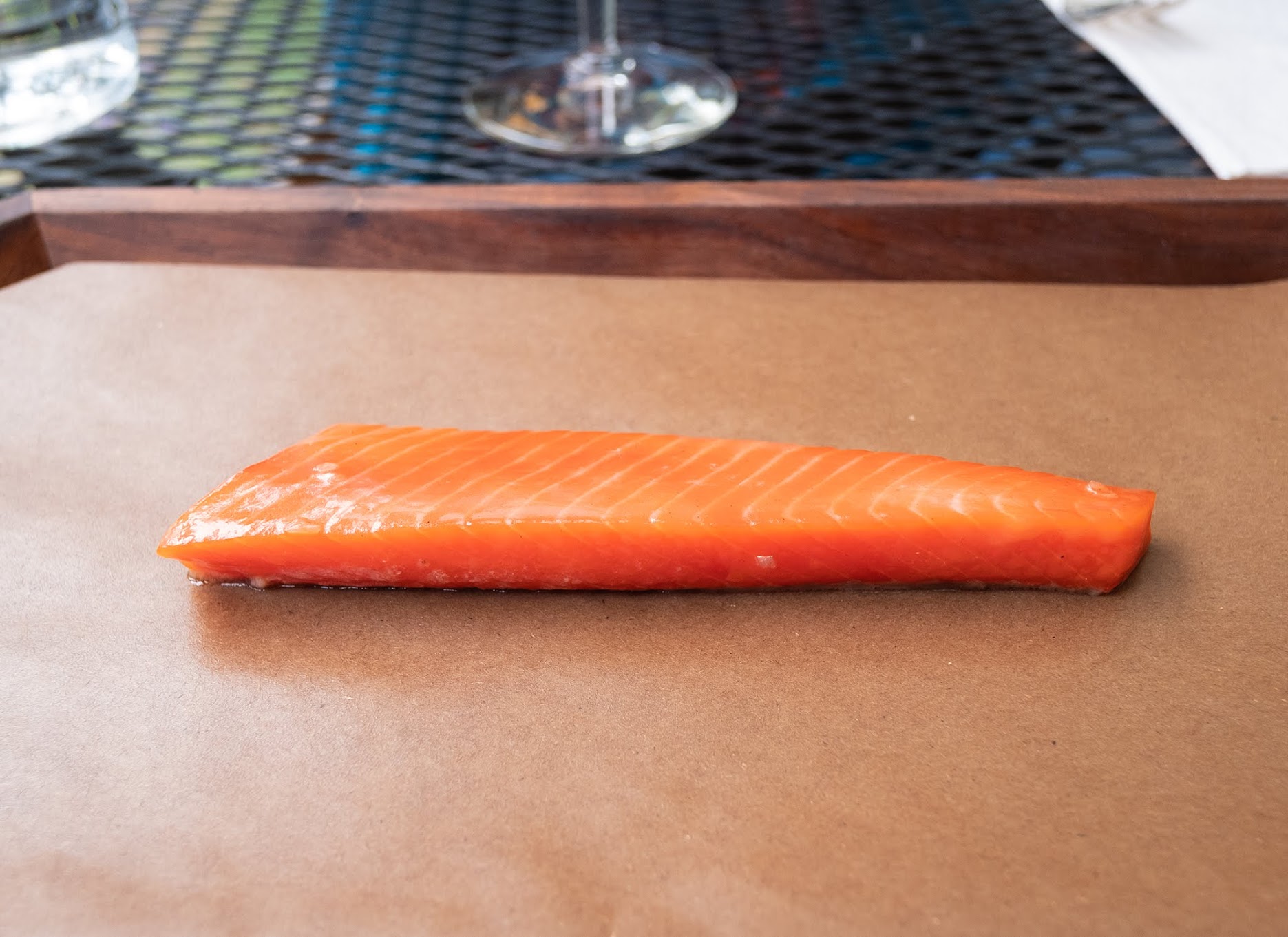 Alderwood-smoked sockeye salmon
The restaurant is famous for its smoked salmon, so we were disappointed that it was not served on our previous visit. They have made amends here. The soft, flaky, flesh deserves its reputation as some of the best out there. Sidestripe prawns, Sungold tomatoes, purslane
These prawns, trapped by the Lummi tribe, are only available for a few days every summer – we’ve lucked out both times we’ve eaten here. On our first visit, they were served raw and partially peeled. This time, they were cured overnight in tomato seeds to firm up their flesh, then served with tomato water and purslane. They are, I think, some of the best shrimp in North America. 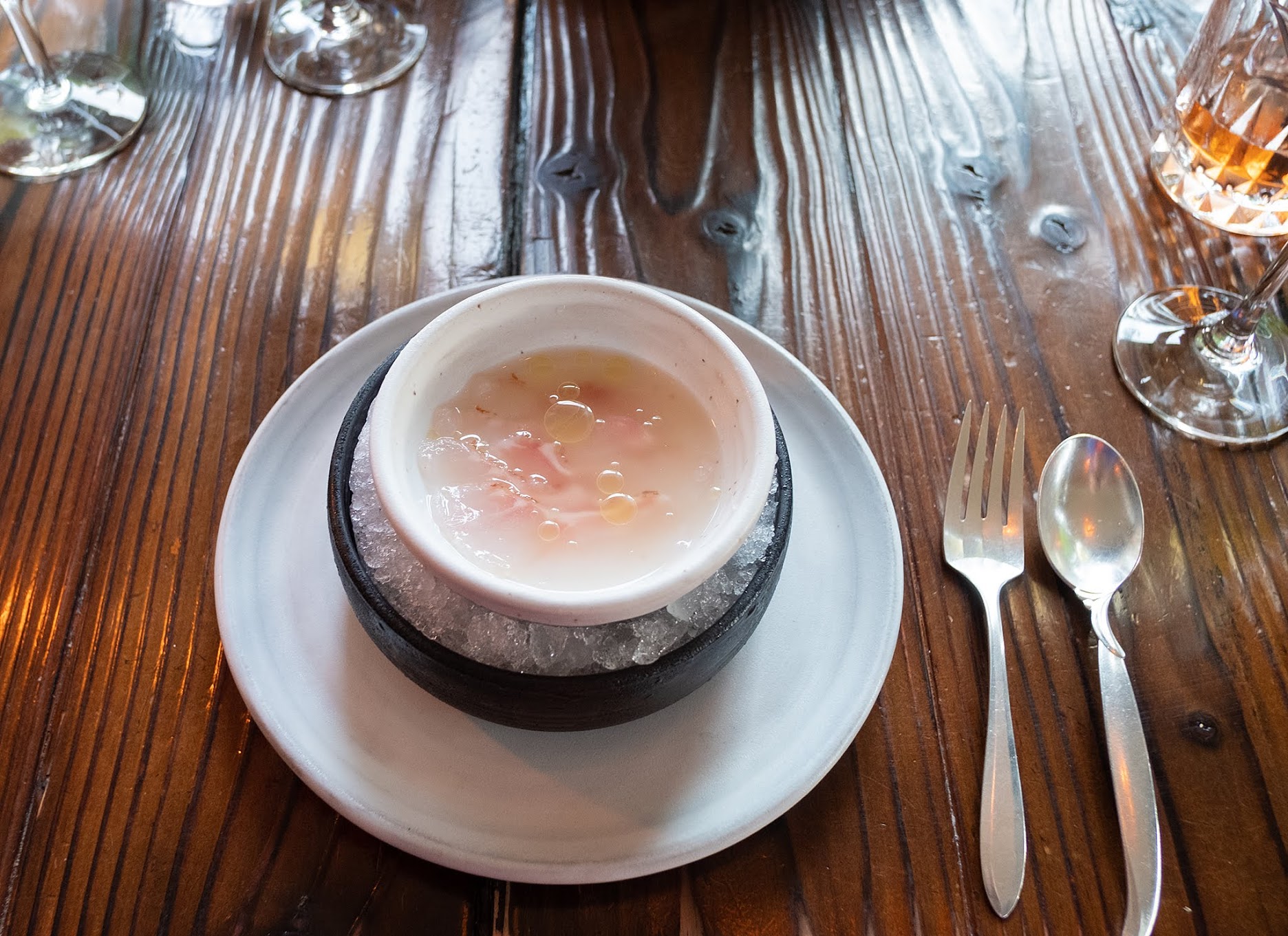 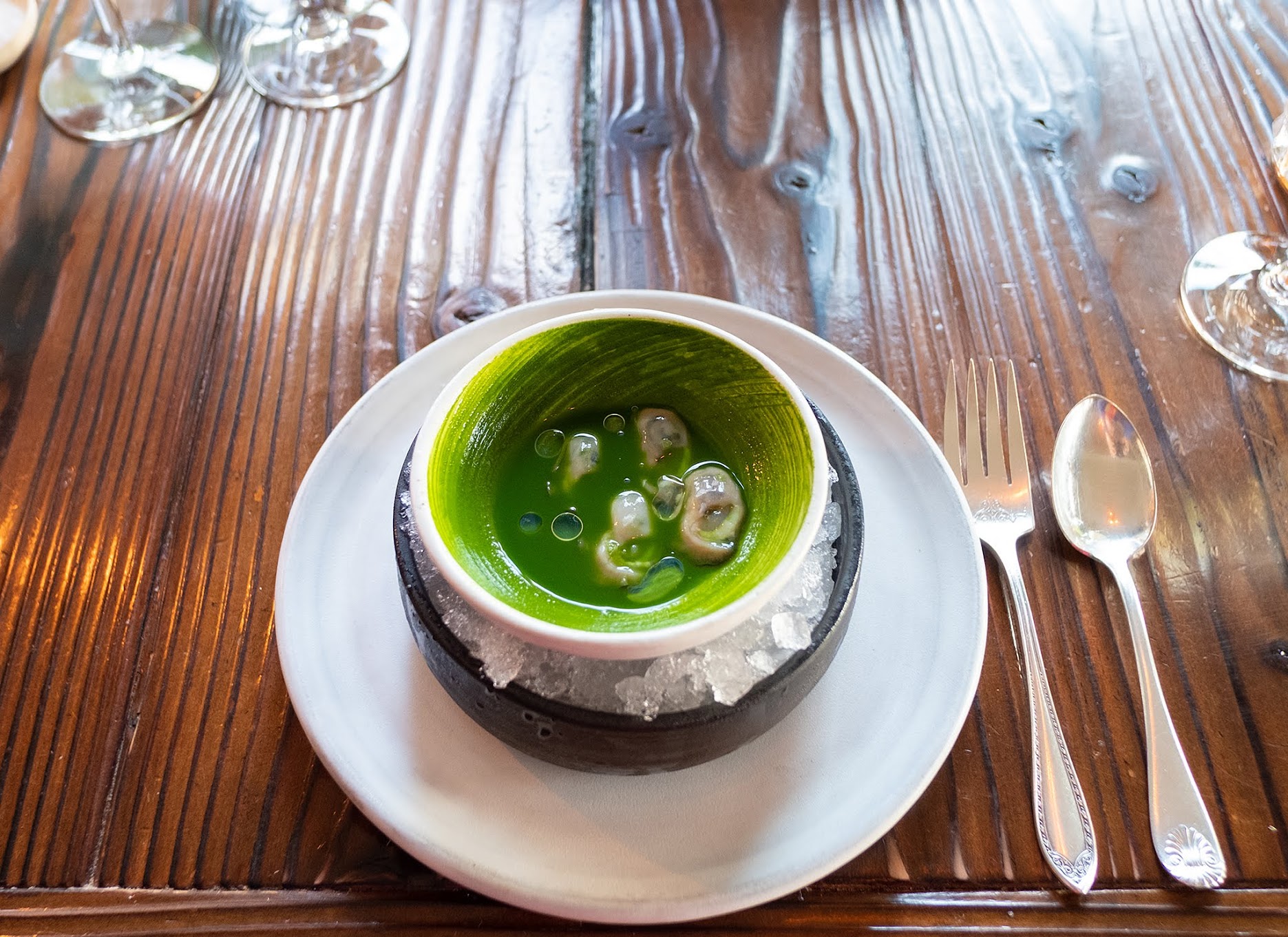 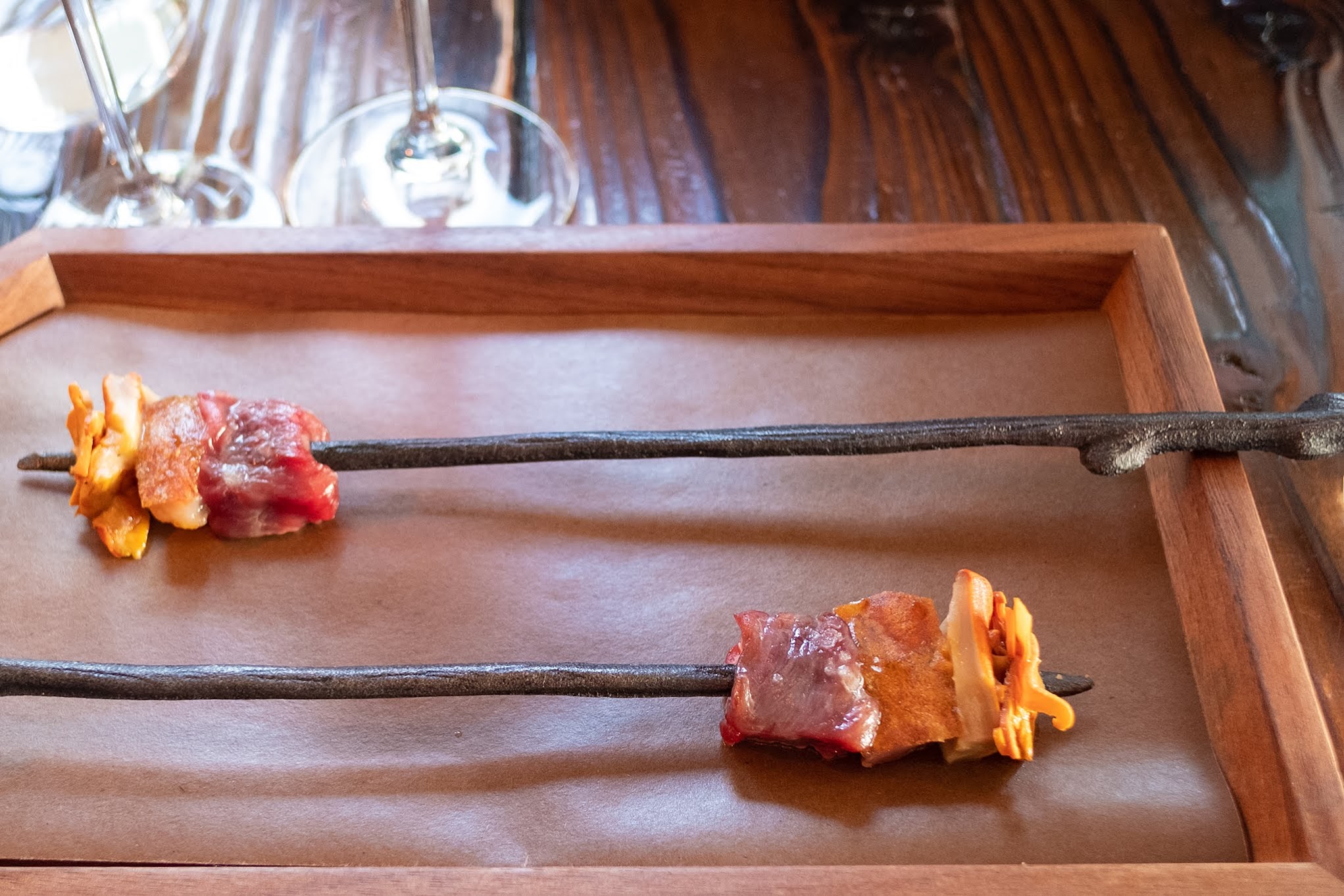 90-day aged venison leg and its tendon
Marinated chanterelles, grilled lobster mushrooms
The aging rendered the meat unbelievably tender, and the tendon was also slow-cooked to the point of melting. In an interesting role reversal, the mushrooms contributed the more “meaty” textures. 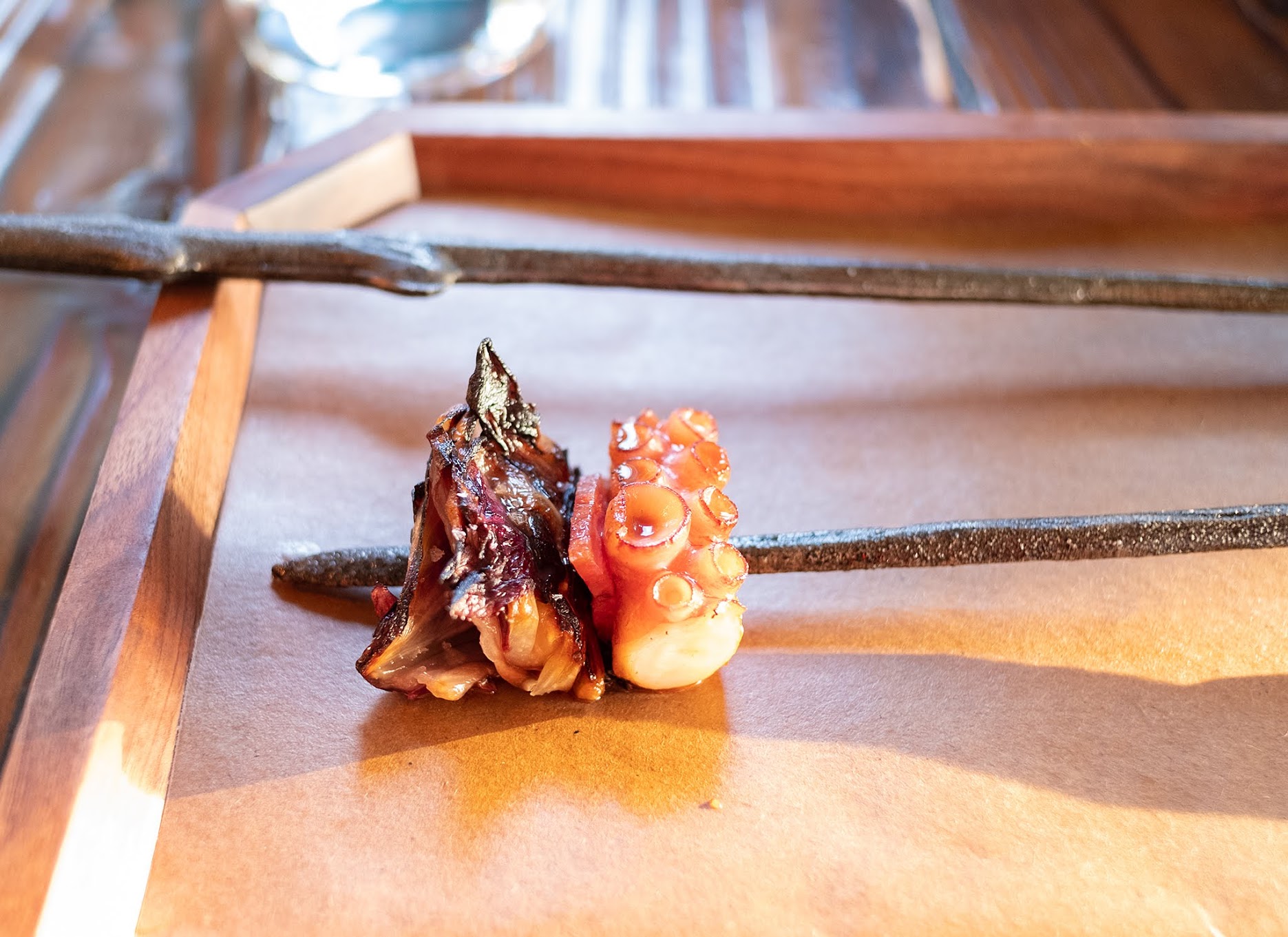 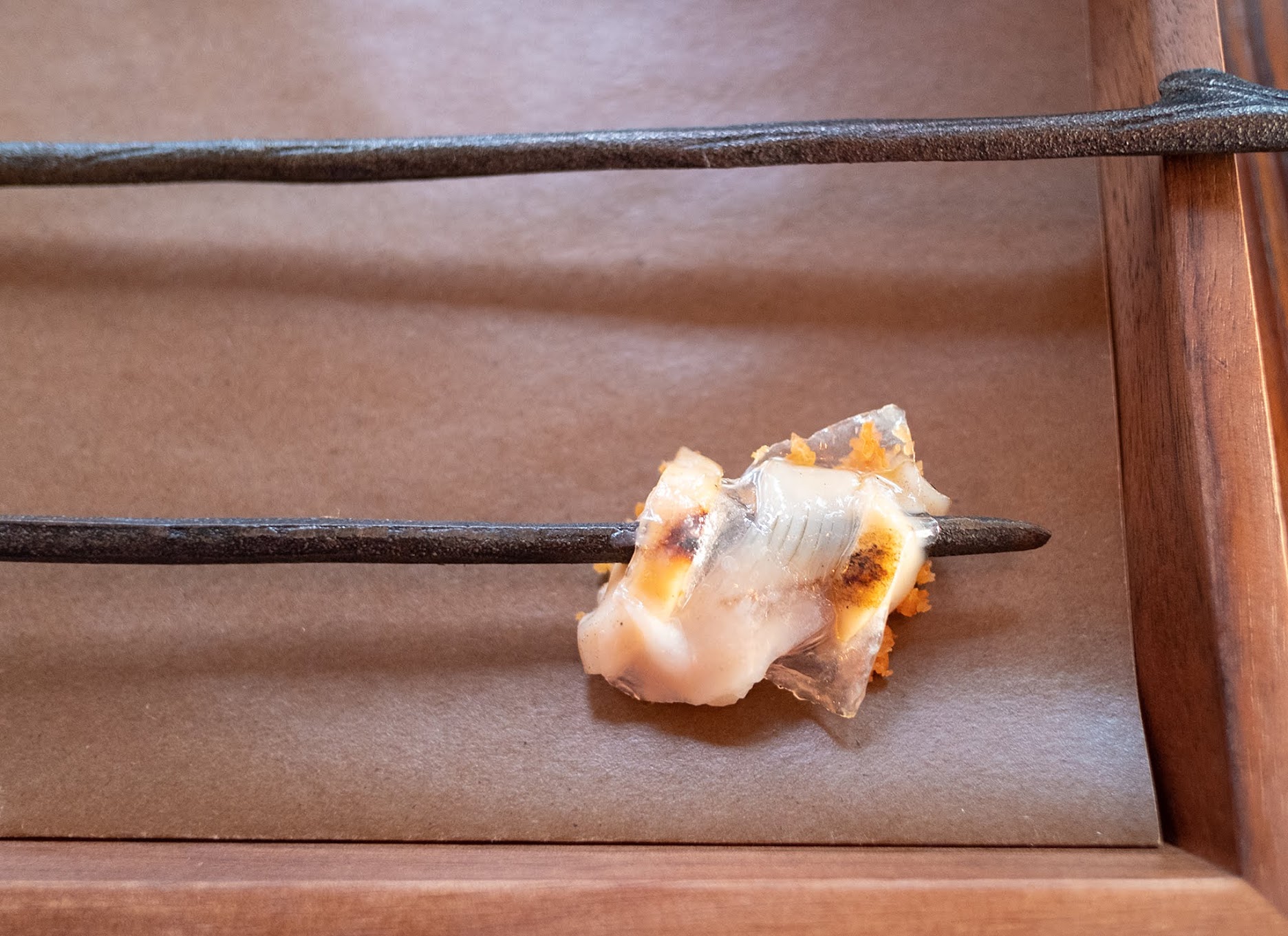 Grilled geoduck
Liver sauce, breadcrumbs, lardo
The geoduck we saw on the grill when we arrived finally made an appearance. Brushed with a sauce of its liver, it was fantastic. 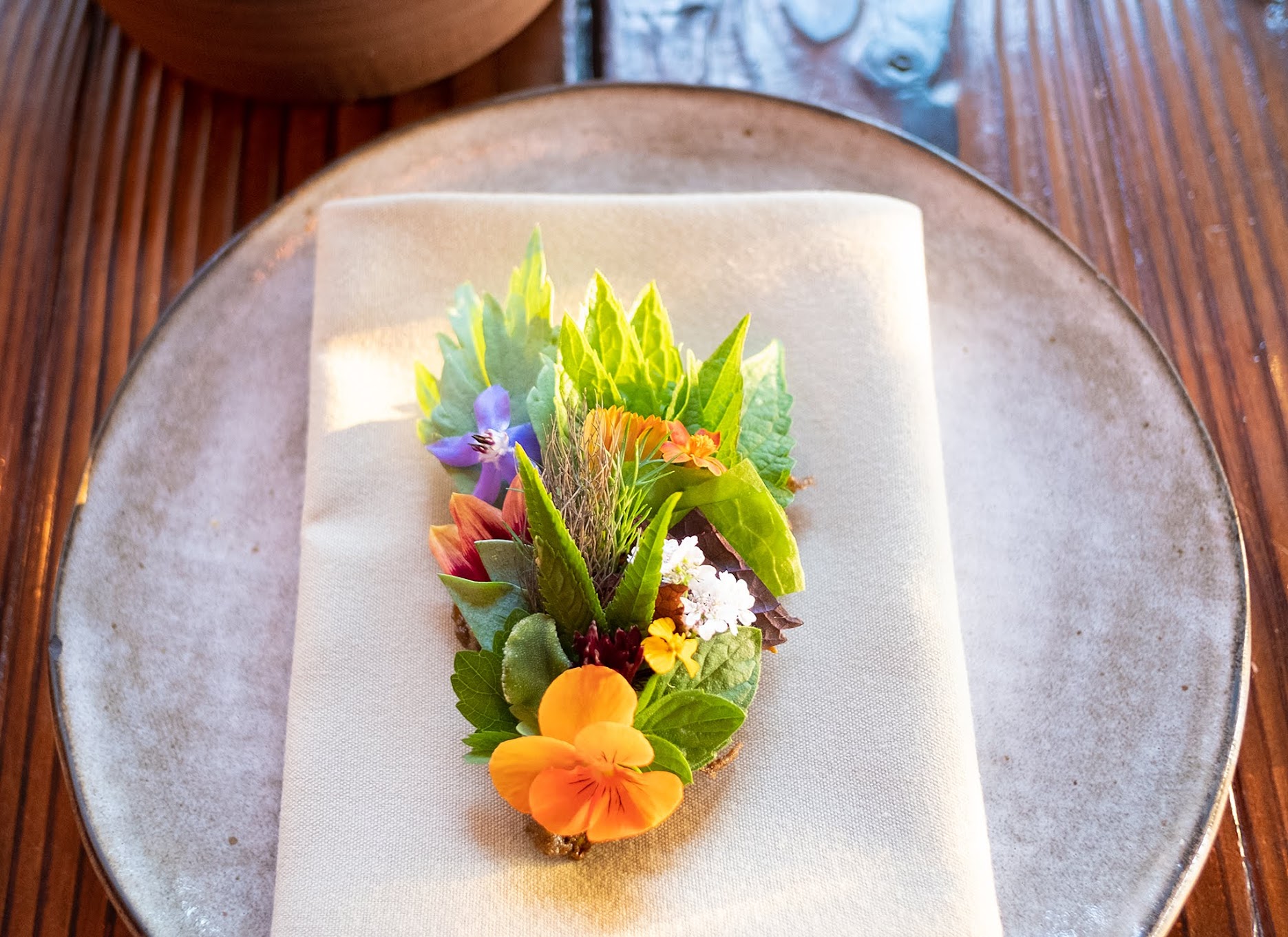 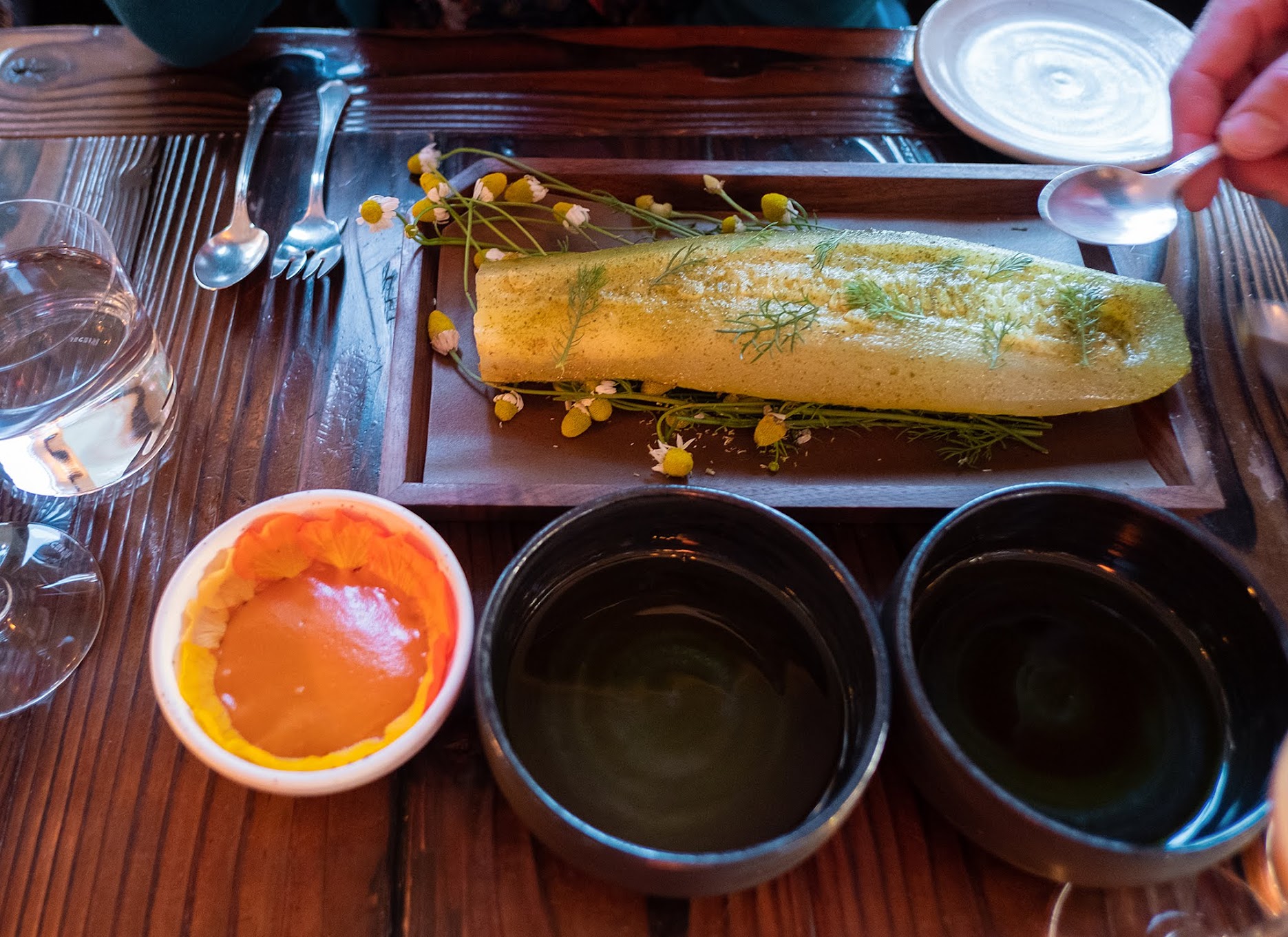 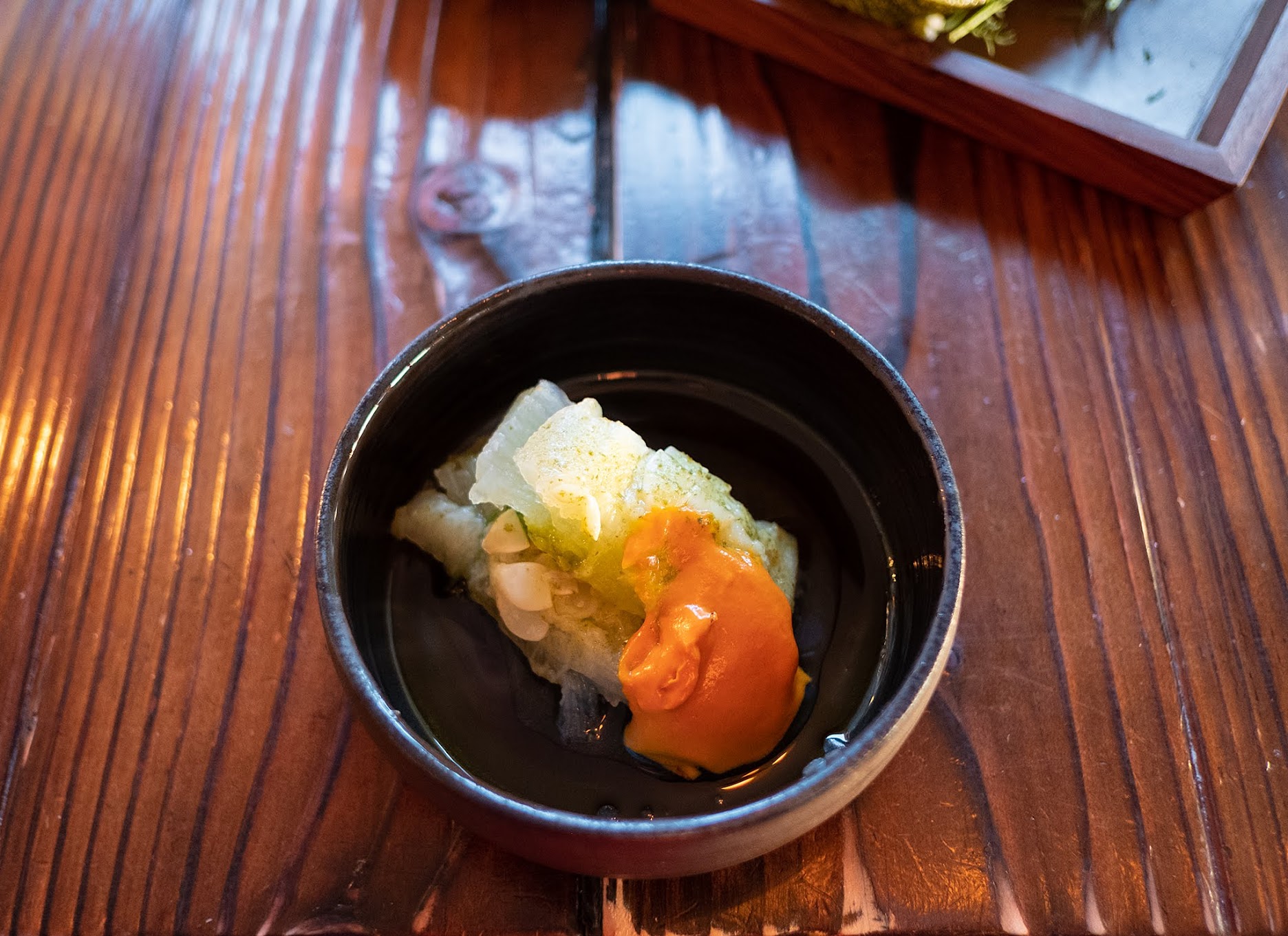 Steamed costata squash, nasturtium, lovage
A large wedge of costata squash was served tableside, having been steamed over chamomile branches for hours until fork tender. It was accompanied by a peppery, bright orange nasturtium purée, and some lovage oil. I am not generally a fan of squash, but the combination of ingredients was really good. 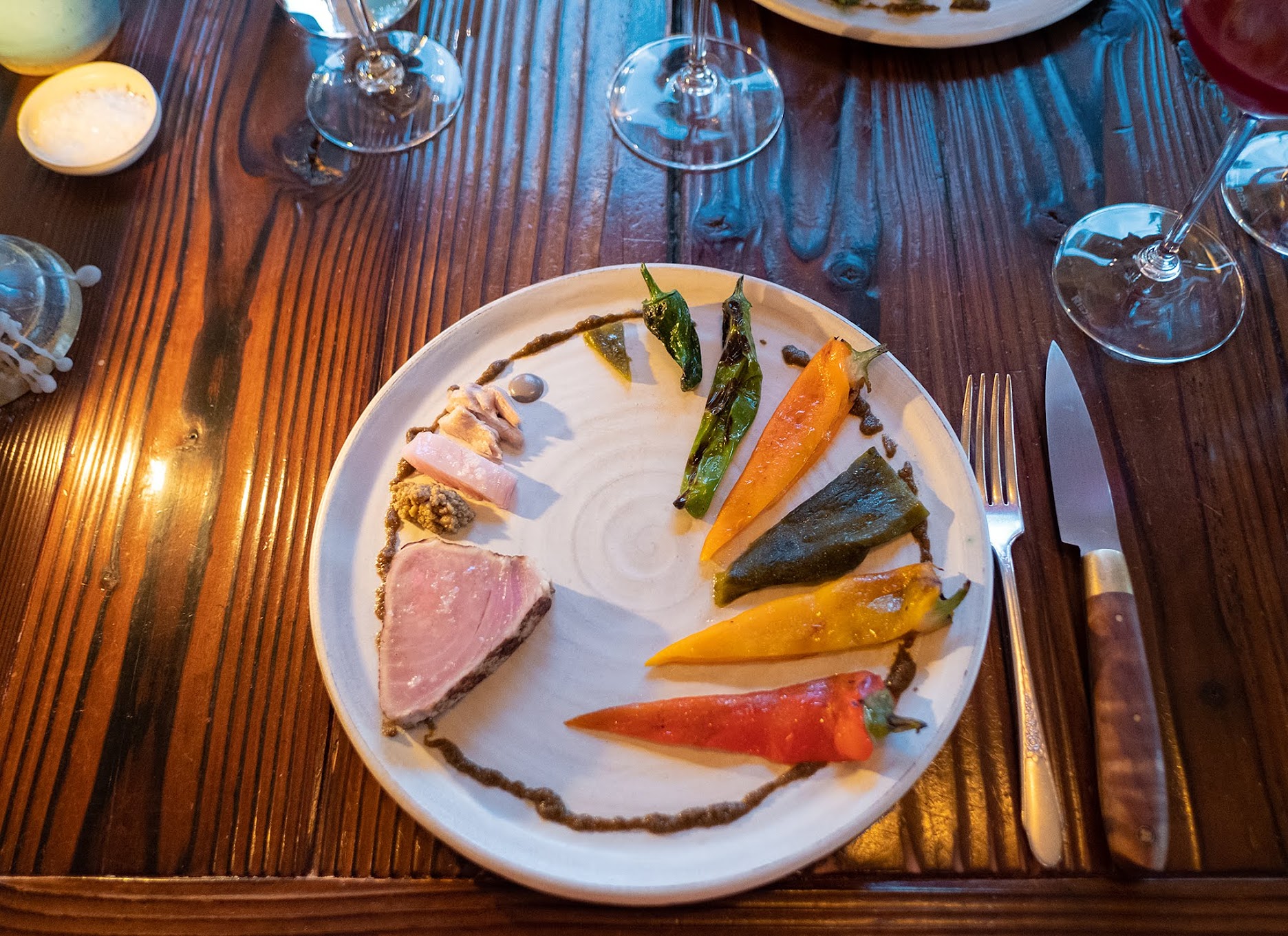 Albacore tuna
Assortment of peppers, Lummi Island spice mix
Five magnificent parts of the fish were plated for us – its seared loin, a “bolognese” of the head, a strip of belly, some flaked collar meat, and a thick purée of skin. The peppers were like a game of Russian Roulette, with a spicy one in the mix. All went unexpectedly well with the albacore. A very commendable dish. 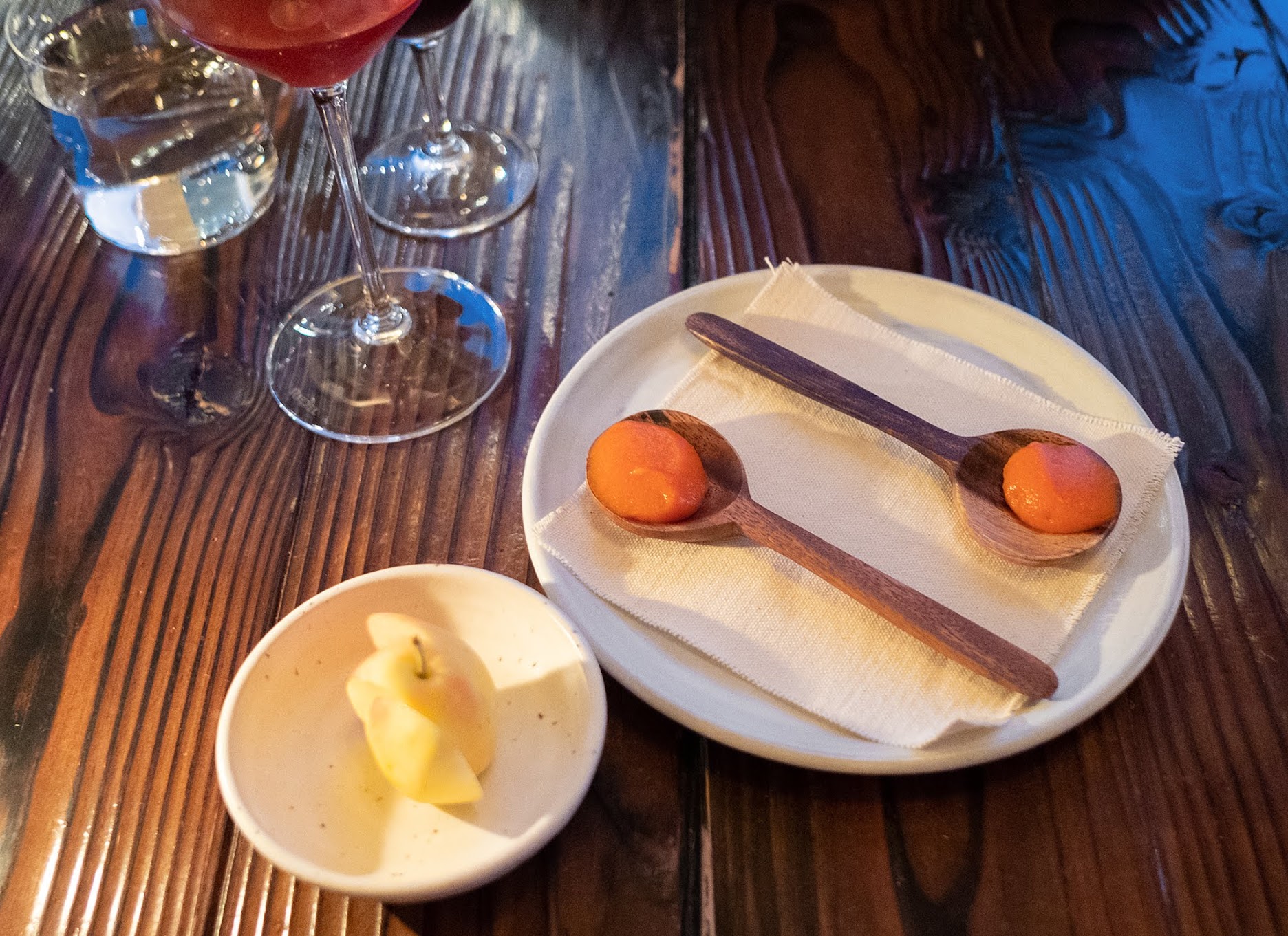 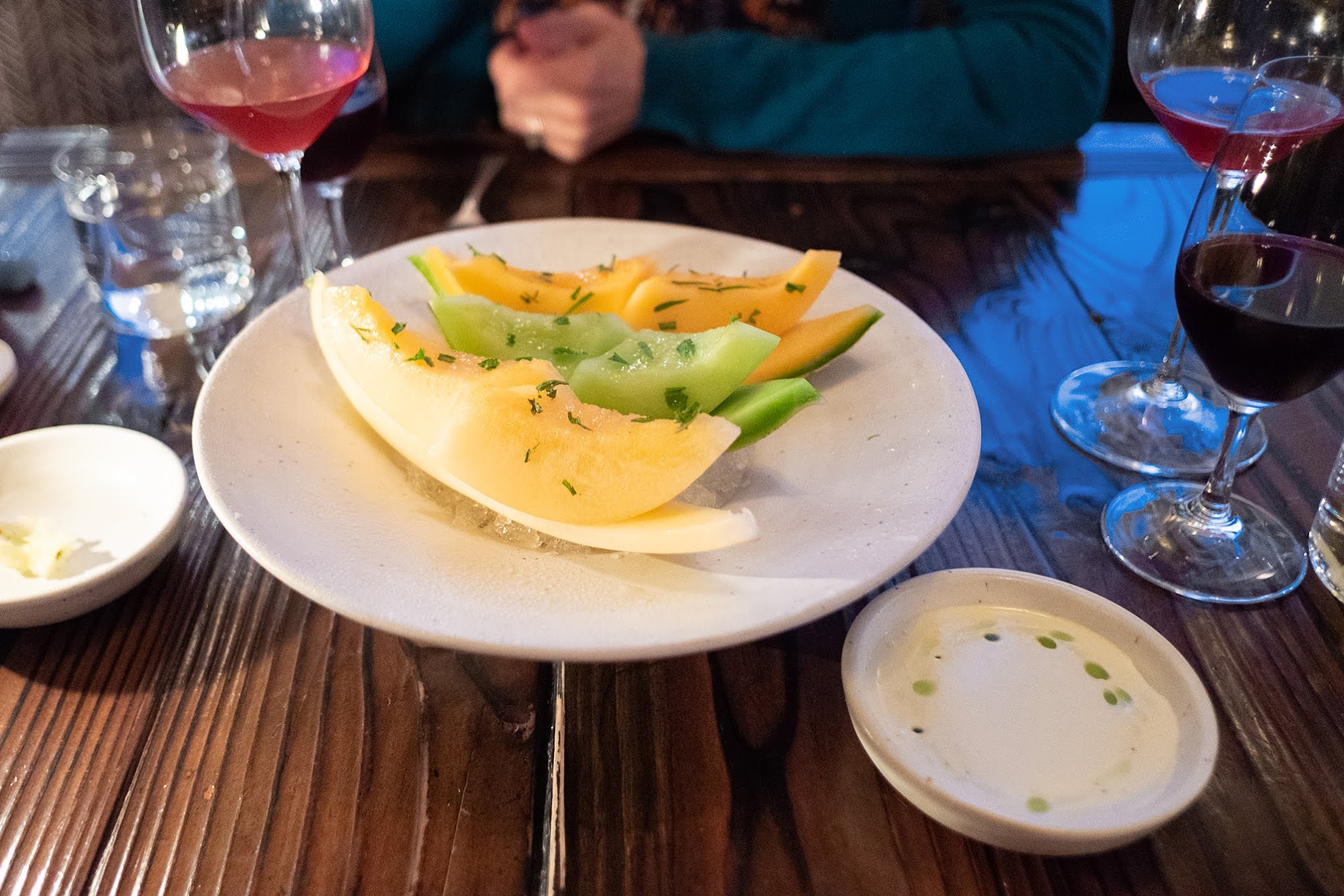 Heritage melons, lemon verbena, huacatay
Cream infused with fig leaves
An unusually warm season has meant a panoply of fruit from the island, including these super-ripe, super-fragrant melons. Like in Japan, they were simply presented on a plate – in this case, with some additional aromatics sprinkled over the top. I can think of few things that can top a good melon at its peak. 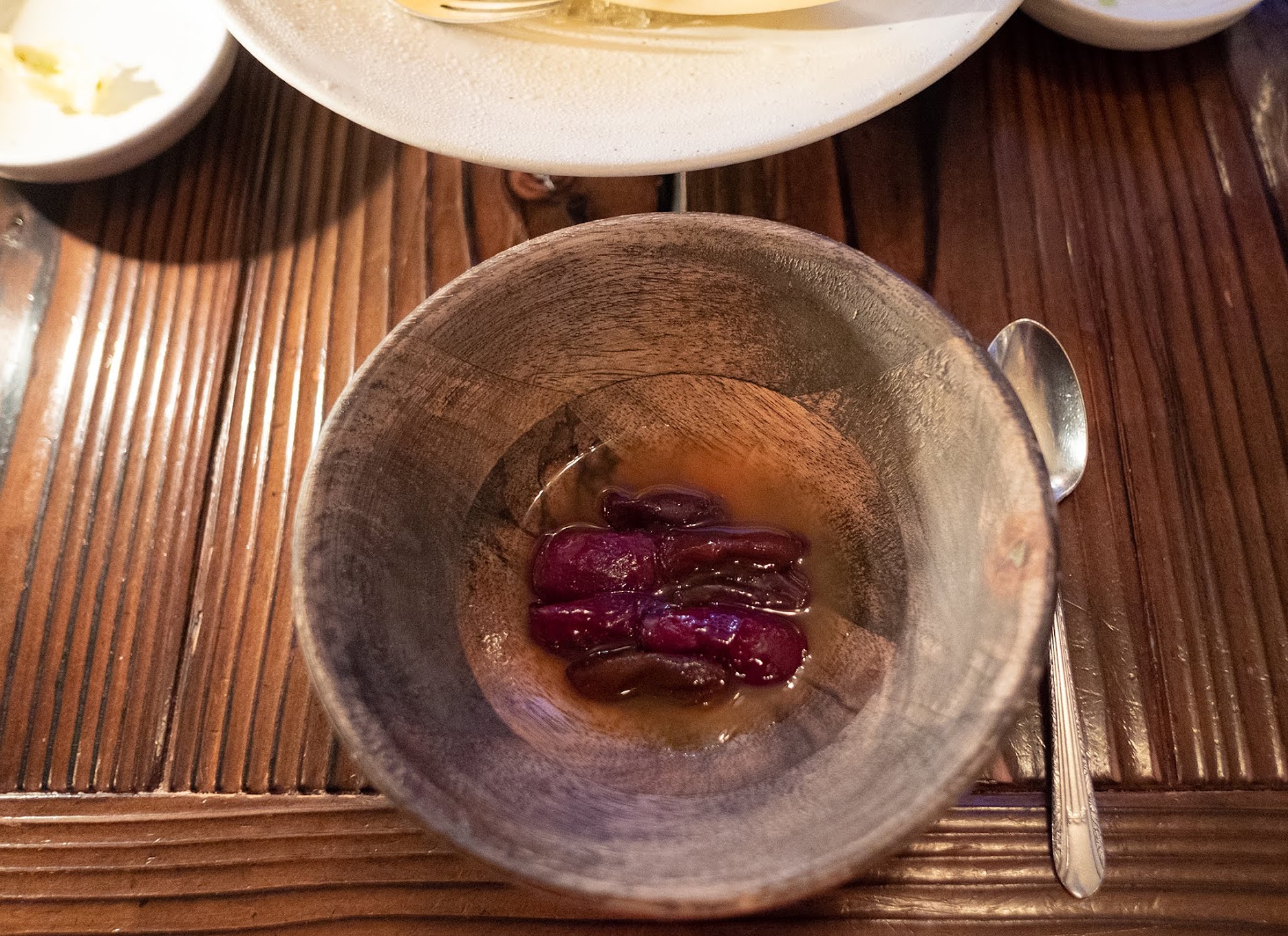 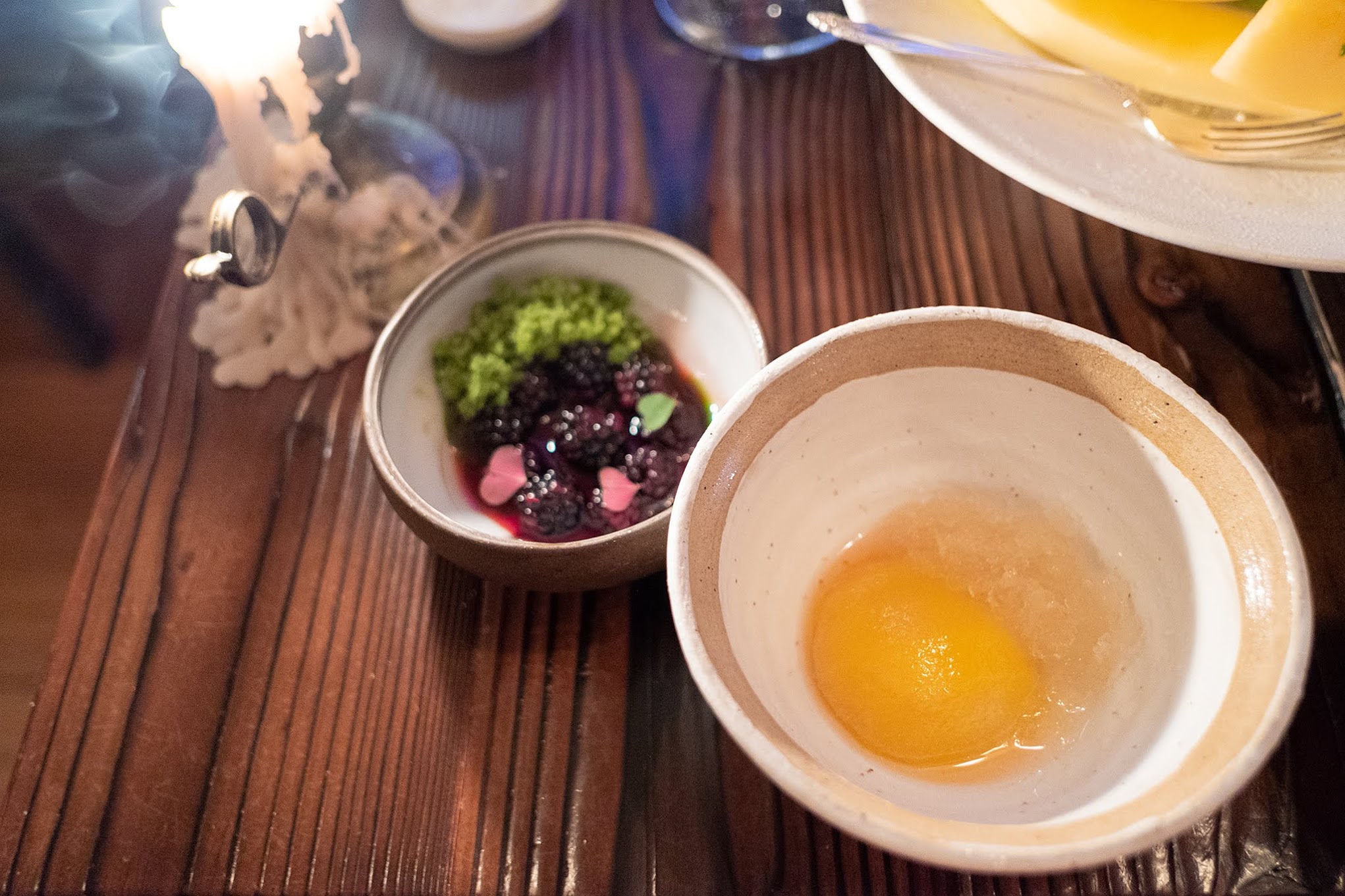 Blackberries and leaves
Peaches and leaves
Each bowl of fruit was topped with a granita of their respective leaves, for a vegetal touch to balance the sweetness. In the case of the peach, the kitchen also snuck in some gin for a little extra kick – deviously good. 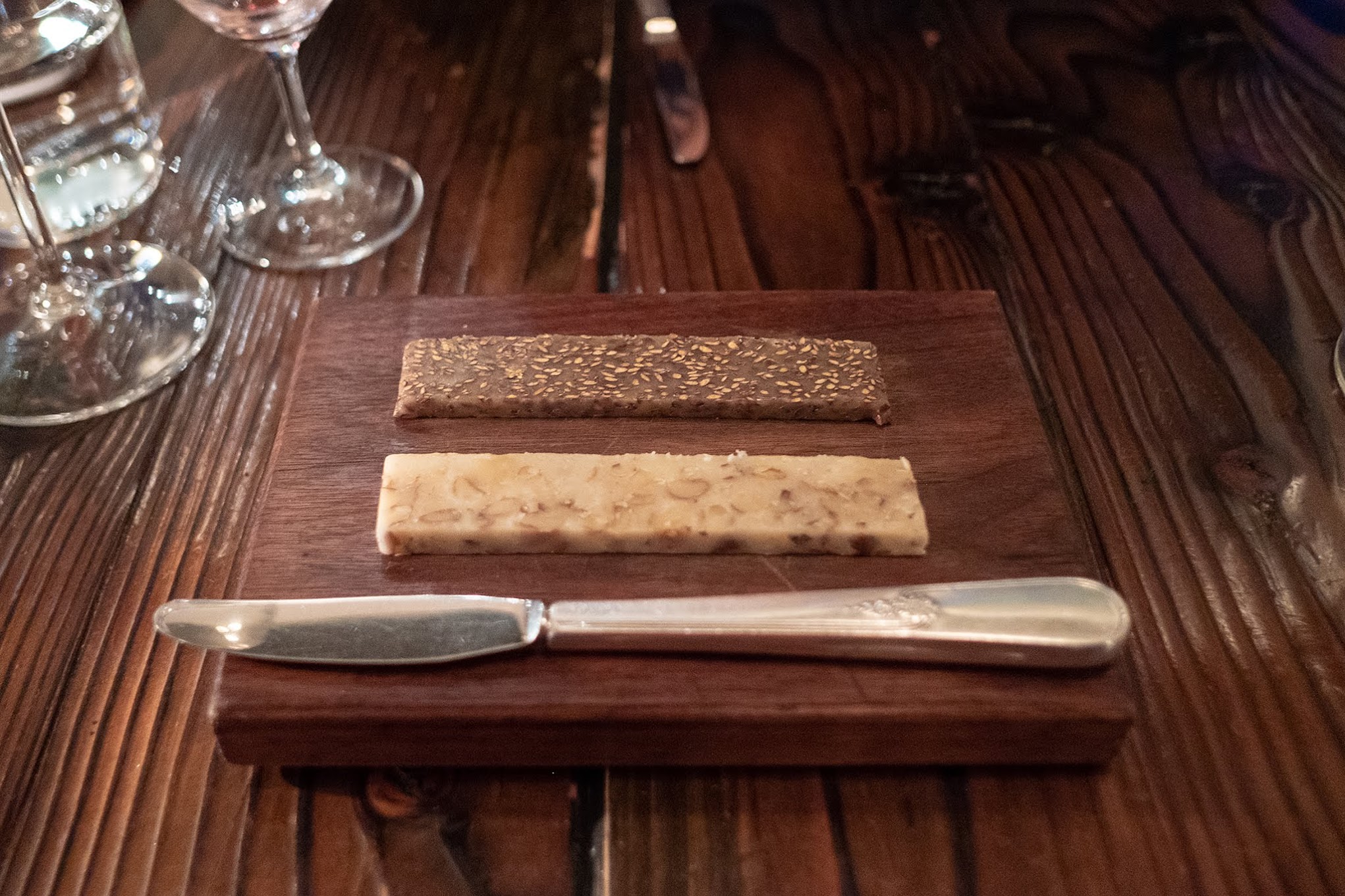 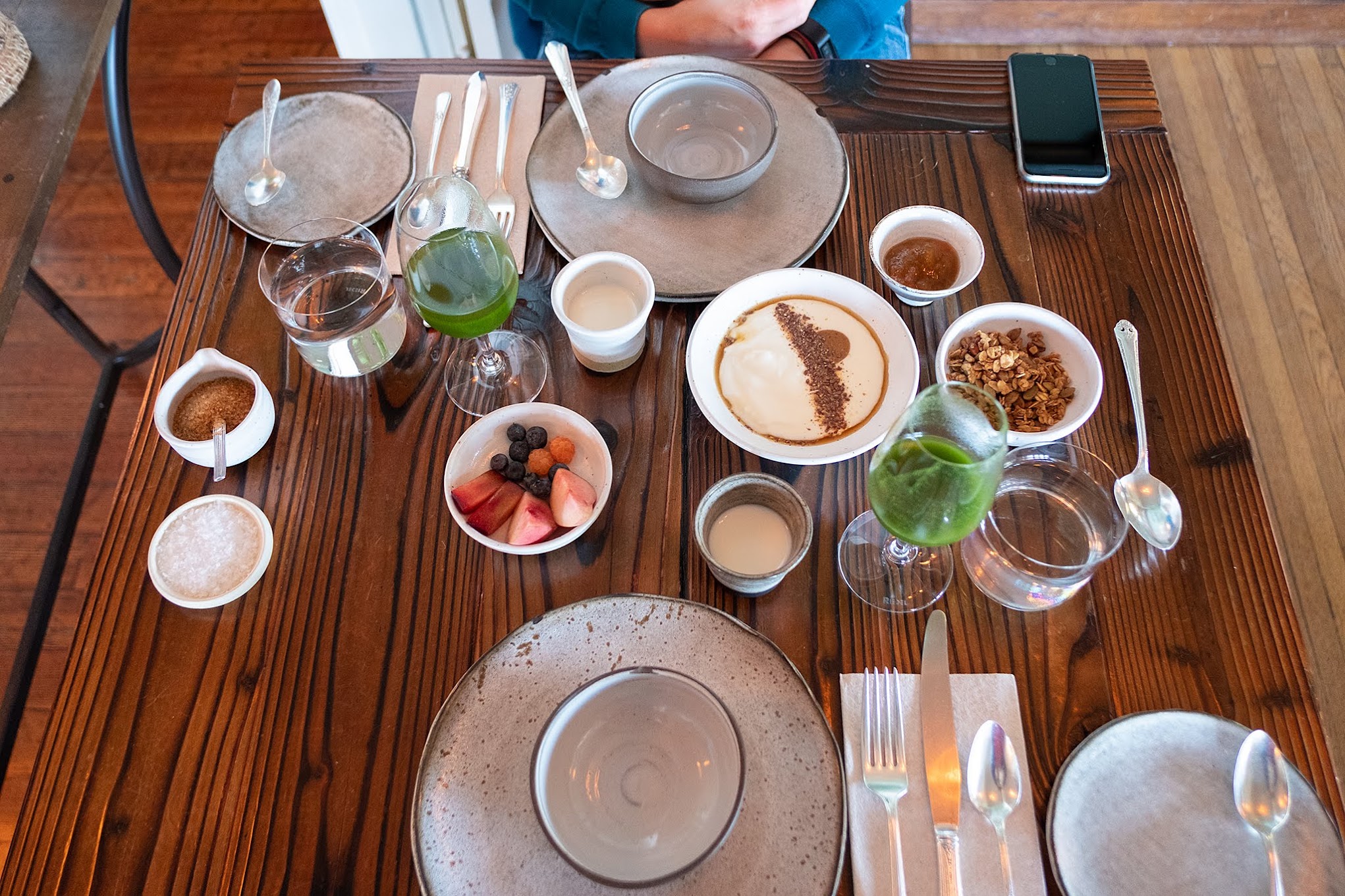 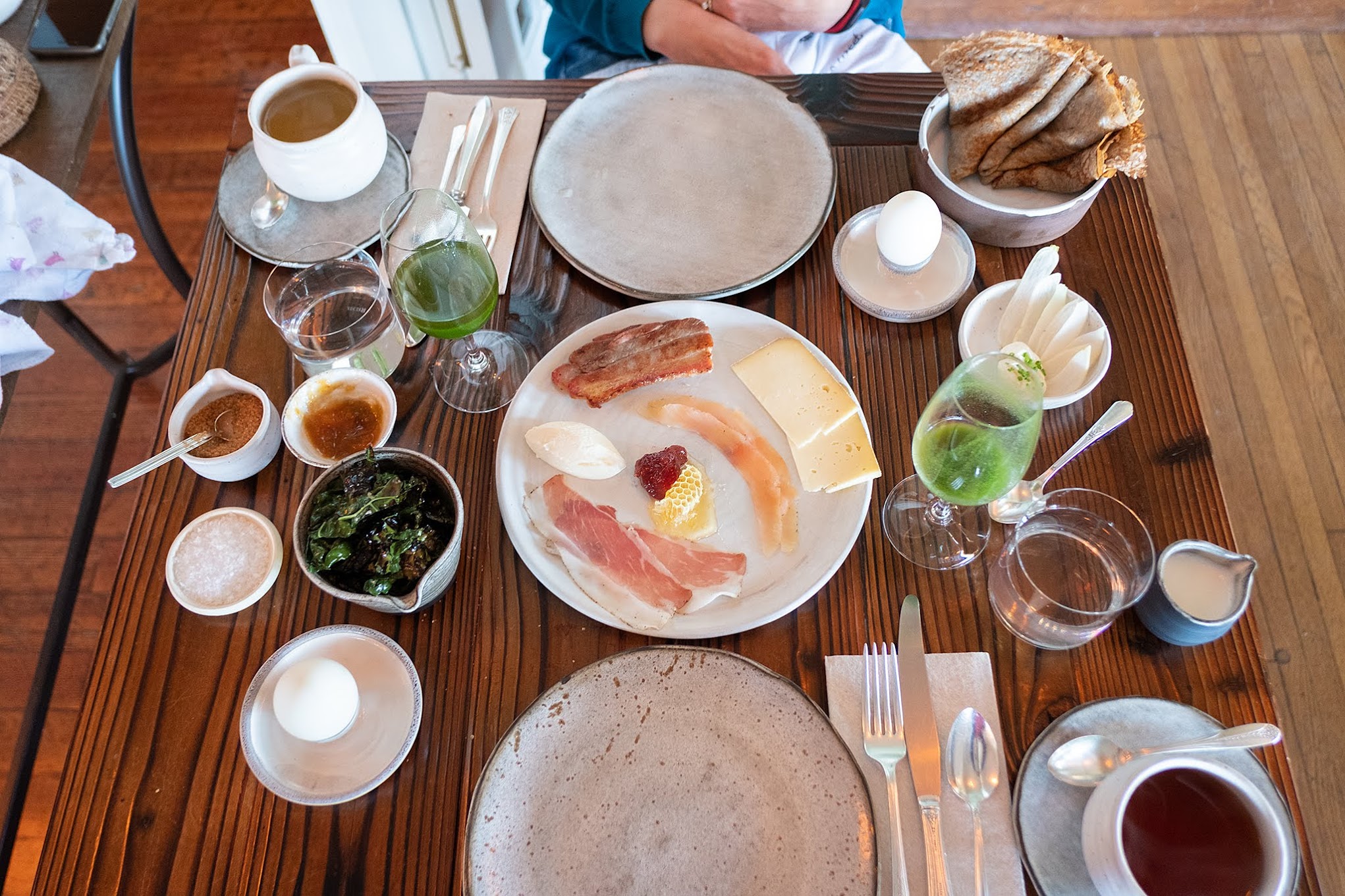 Breakfast
The morning after is something to look forward to at the inn – overnight guests are treated to a hearty breakfast spread that includes: fresh goat’s milk, housemade yogurt and granola, jams, buckwheat crepes, fruits and vegetables from the farm, bacon and eggs, cured meats and cheeses. Even with the length of the previous night’s menu, the courses were light and refreshing enough that I was ready for breakfast. A visit here would not be the same without this reviving meal.

If I was very impressed by our first visit, I am completely blown away now. How much better can they get? After talking with the chefs, we are determined to return during a different (colder) season to dig even deeper into the wealth of seafood the Pacific Northwest has to offer.