Birdsong is a beautiful restaurant – from its open kitchen with a wood-burning hearth and shiny Hestan stove, to its Chef’s Counter hewn from a single tree. Dining alone this night, I was seated at one end of said counter, closest to where Chef Chris Bleidorn was expediting. As of this writing, the restaurant serves a single tasting menu, very recently expanded to 13 courses after going through an initial warm-up phase in the past month. 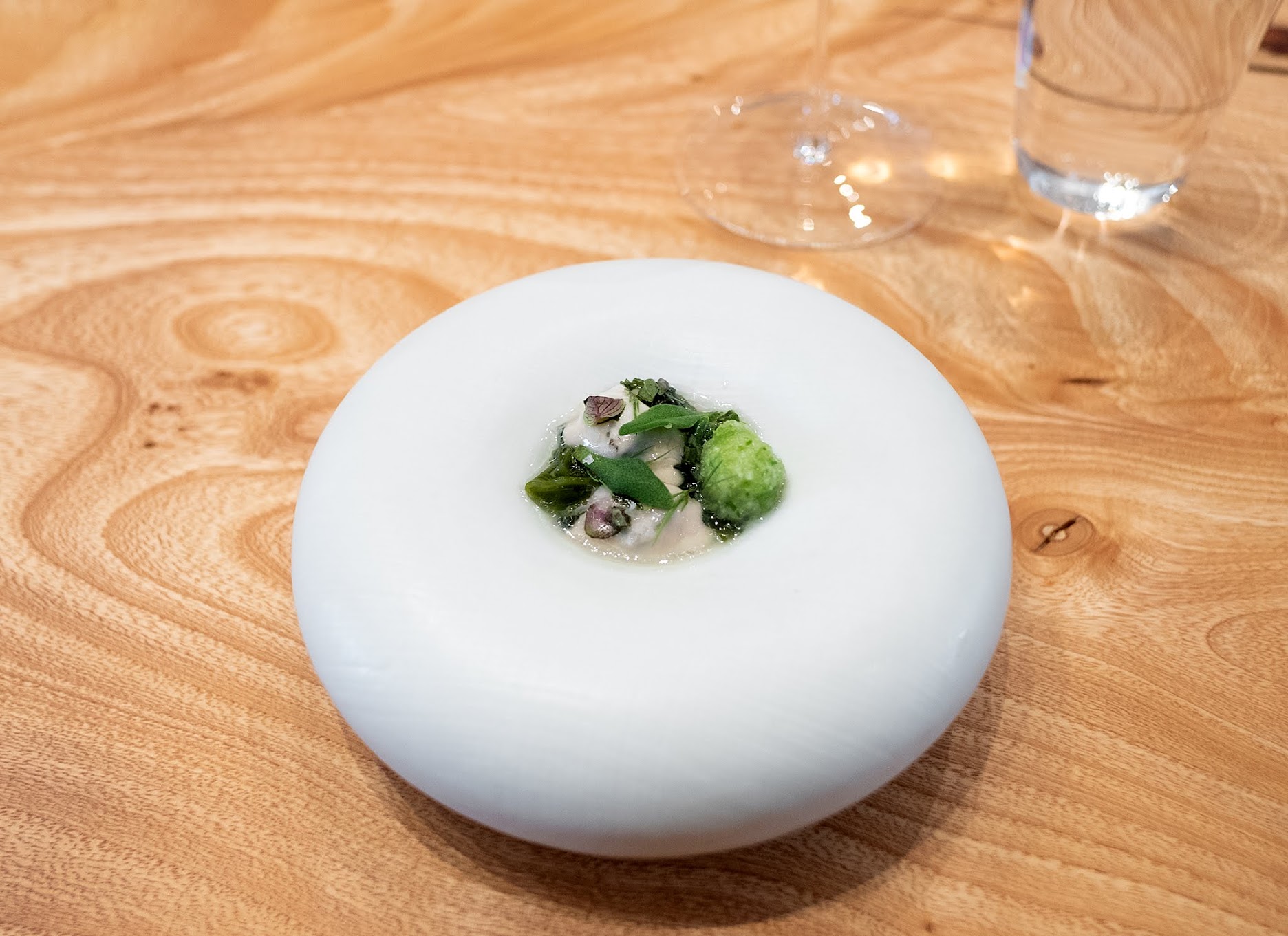 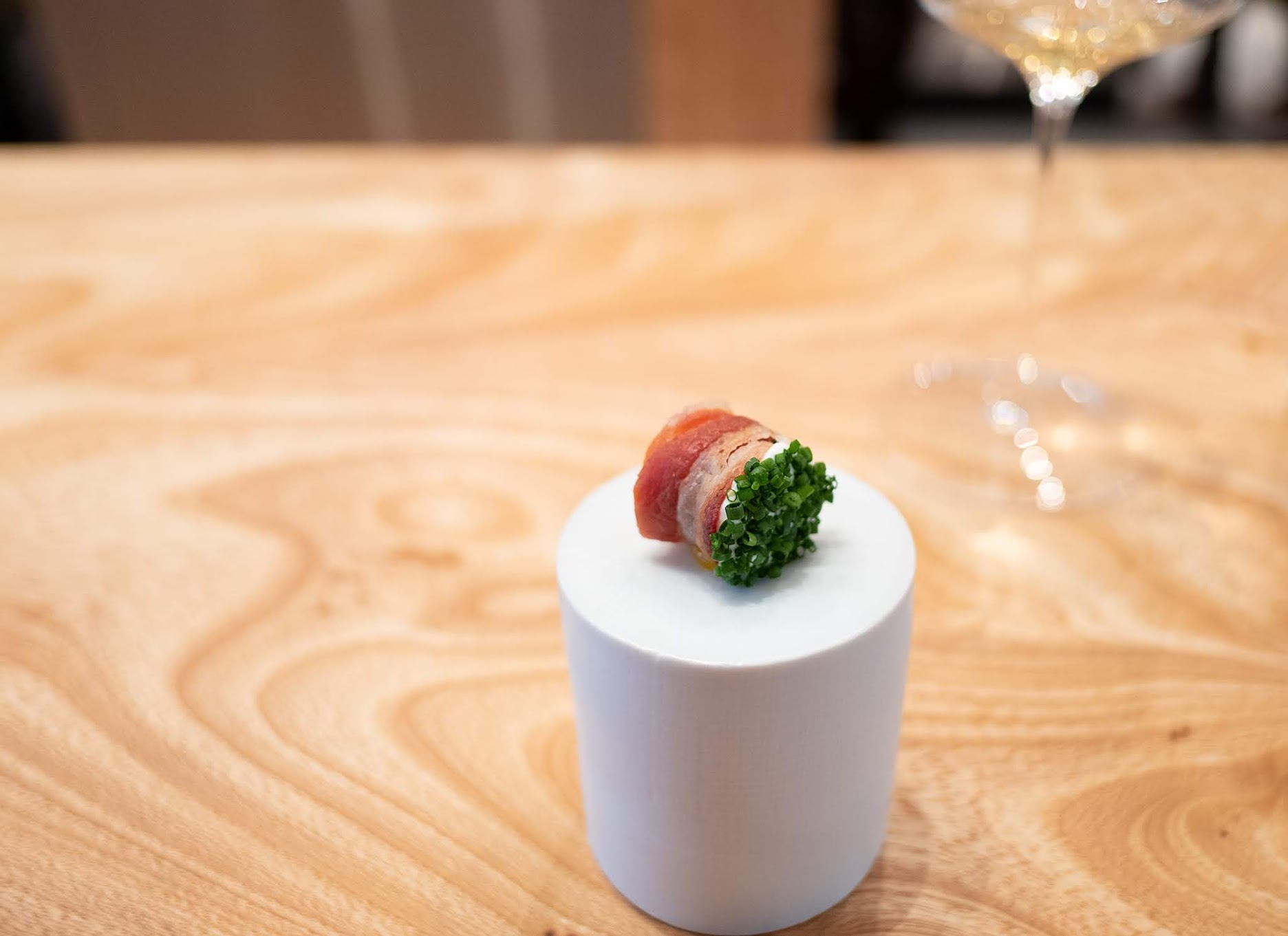 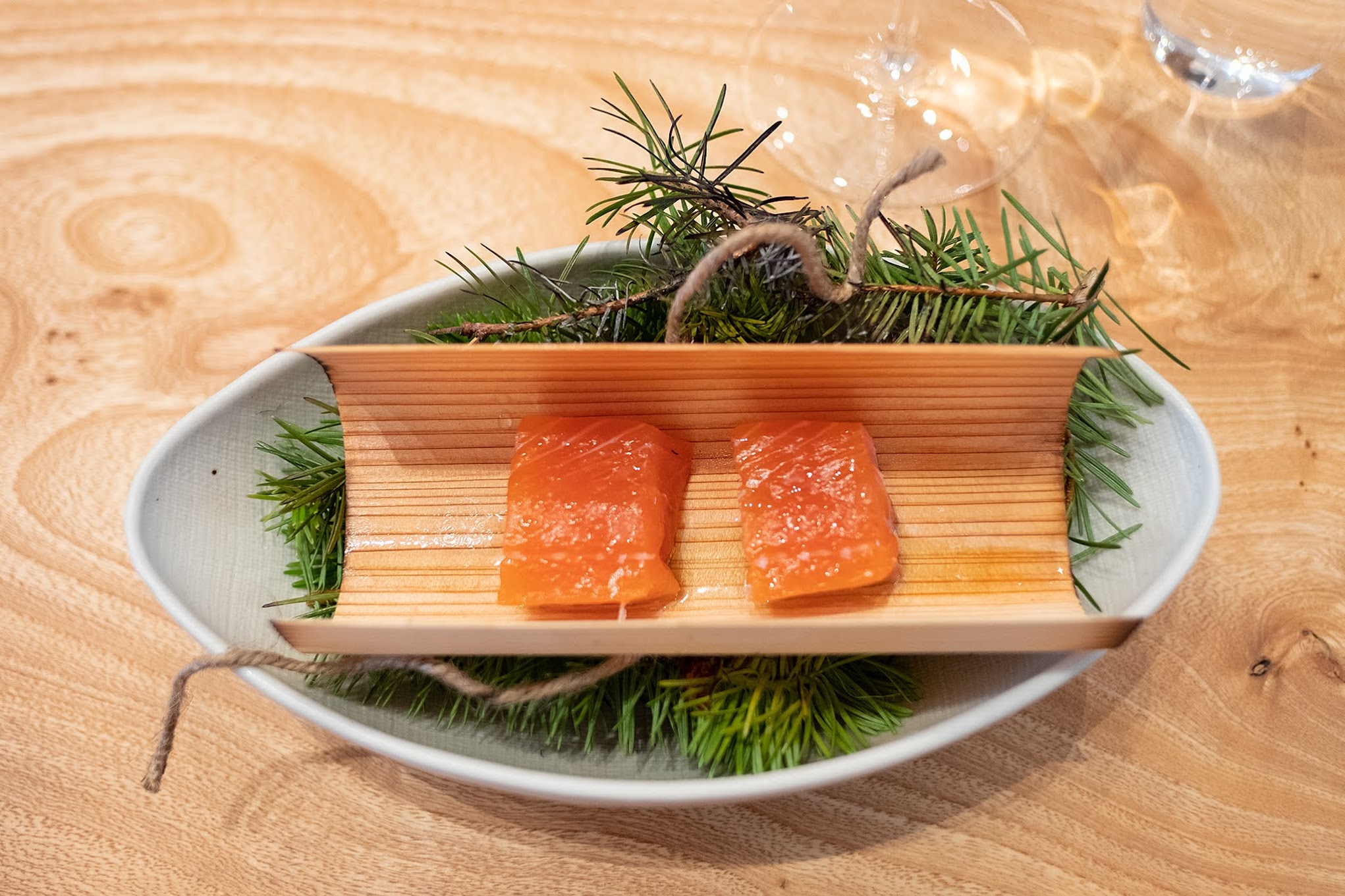 Mt. Lassen trout
Part one of a triptych featuring the creek-raised fish. Here, it was lightly cured and smoked, then served slightly warm in a parcel of cedar bark. 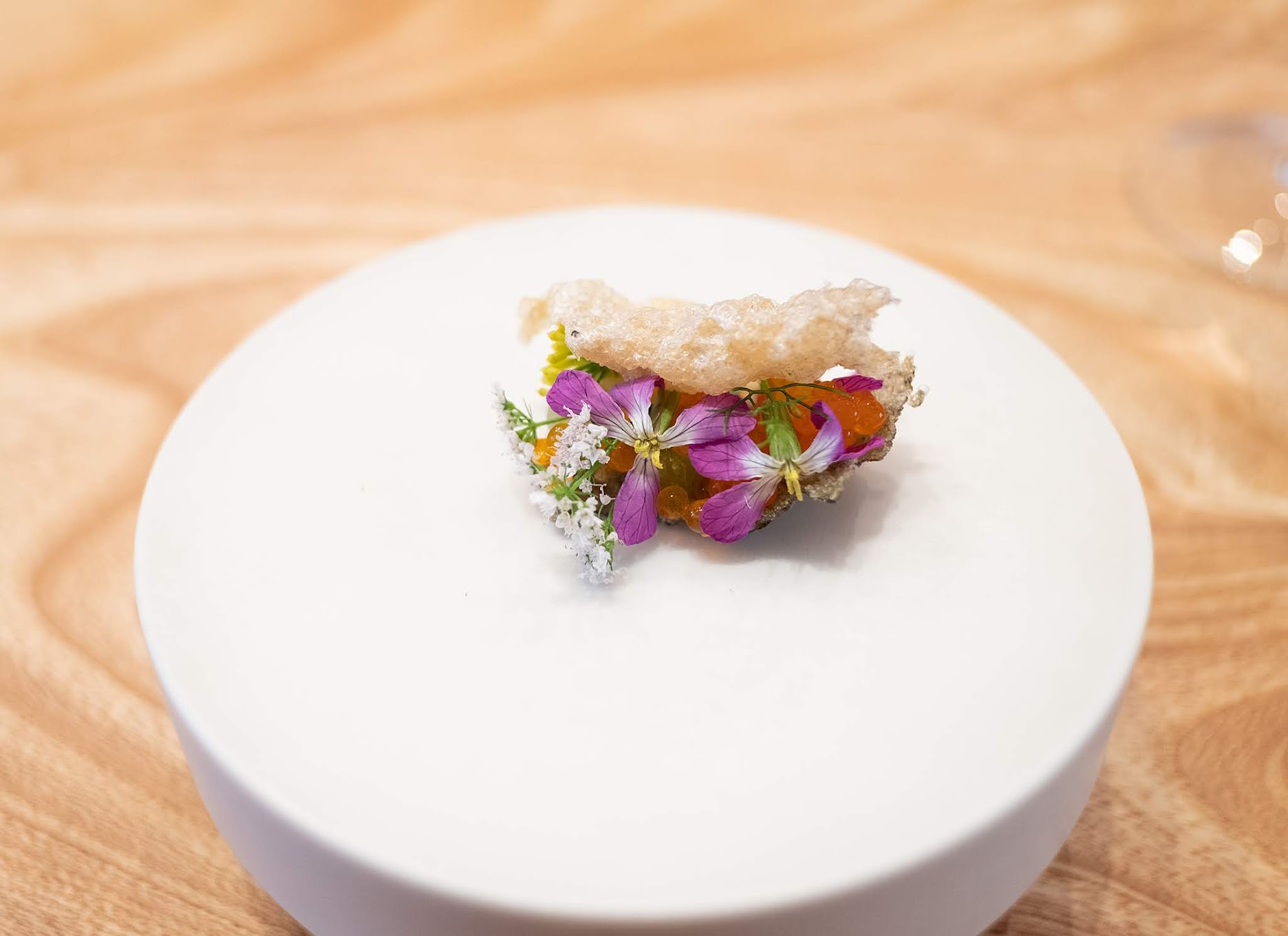 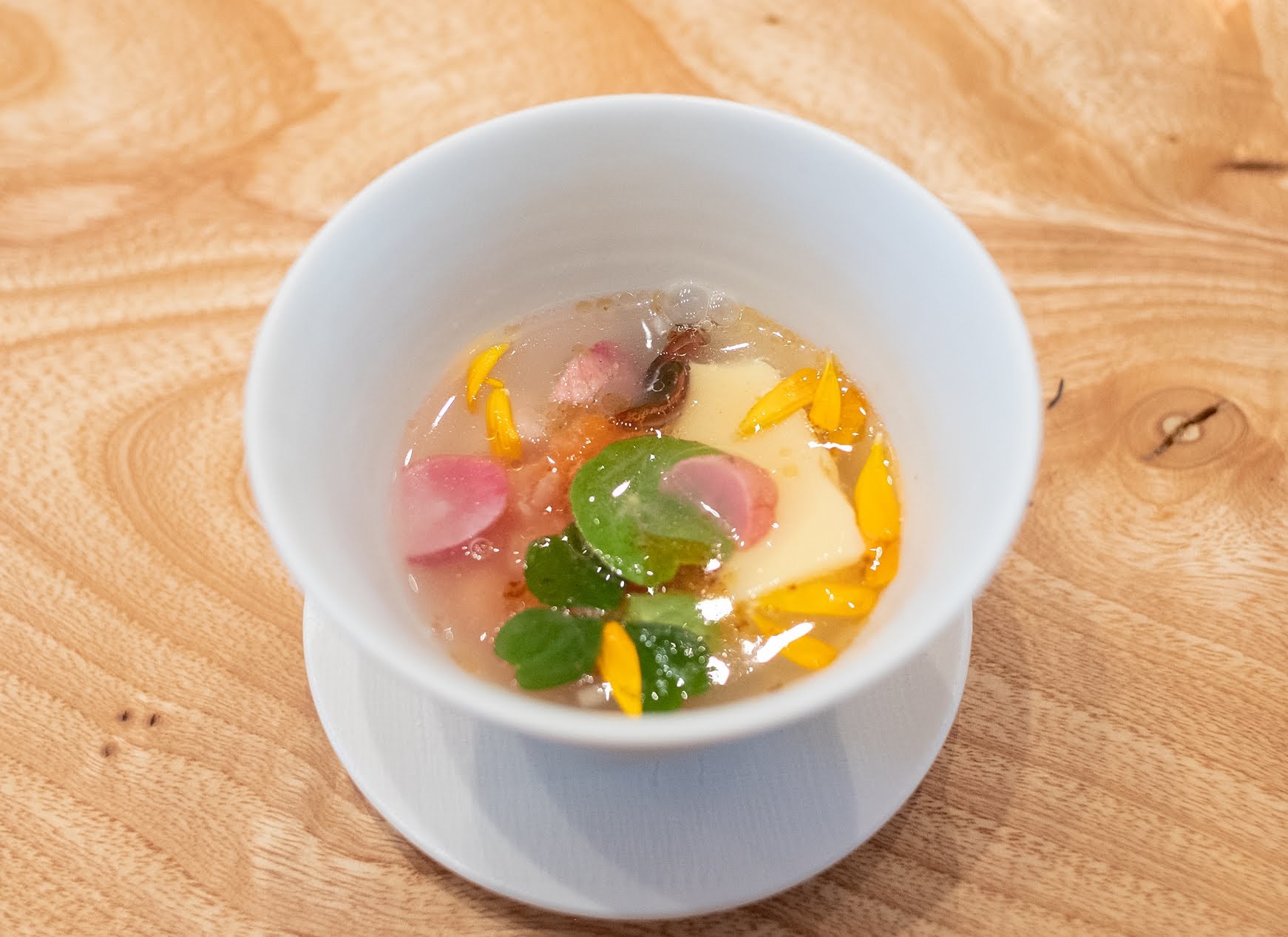 Custard of dried trout bones
Scraped belly meat, radishes, marigold
The trout trio ended with a chawan mushi made from a stock its dried bones. This was really good with the accompanying belly meat – the fresh, peppery radishes and marigold petals added some interesting elements as well. 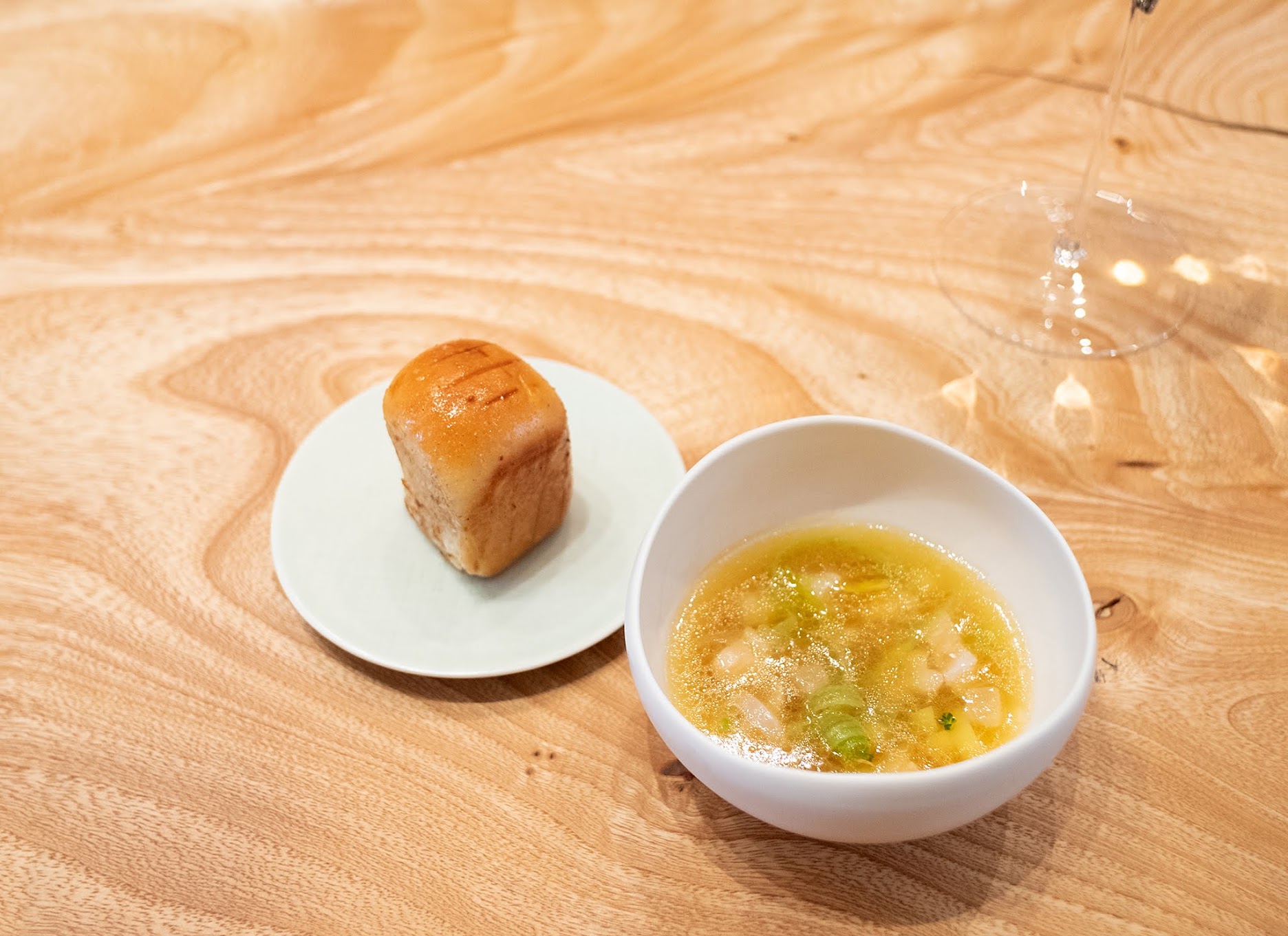 Giant clam, buttermilk whey, lardo
Parker House roll brushed in boar fat
A dish inspired by Bleidorn’s Bostonian roots. This was clam chowder, elevated. Instead of a cream base, there was buttermilk whey that had been separated, leaving it clear but with a strong lactic tang to complement the briny geoduck. Melted lardo added a rich, fatty element that coated the palate – tasty but somewhat heavy-handed. The roll, warmed over the hearth, evoked a connection to his former position at Saison. I can see this dish being a crowd-pleaser. 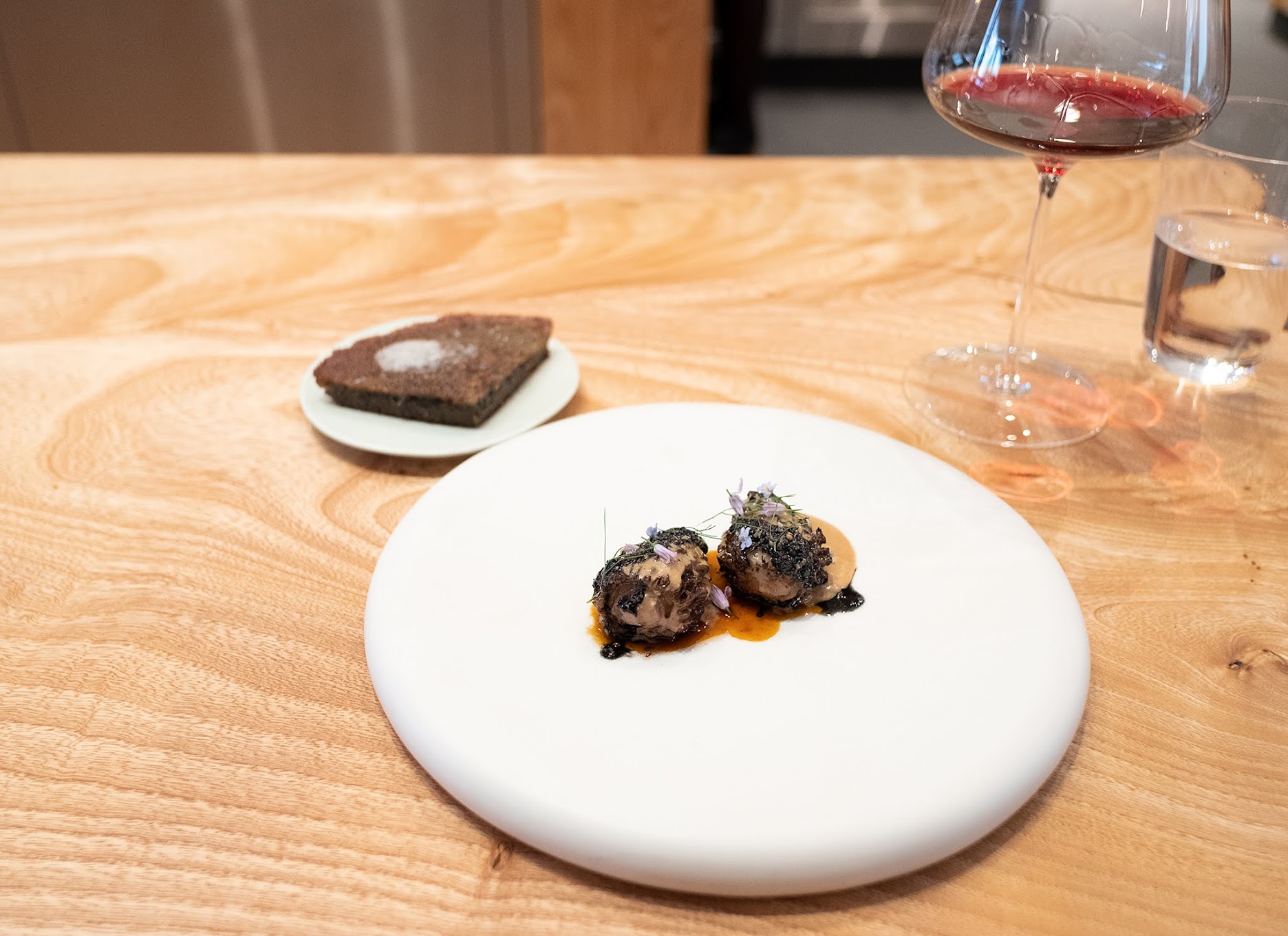 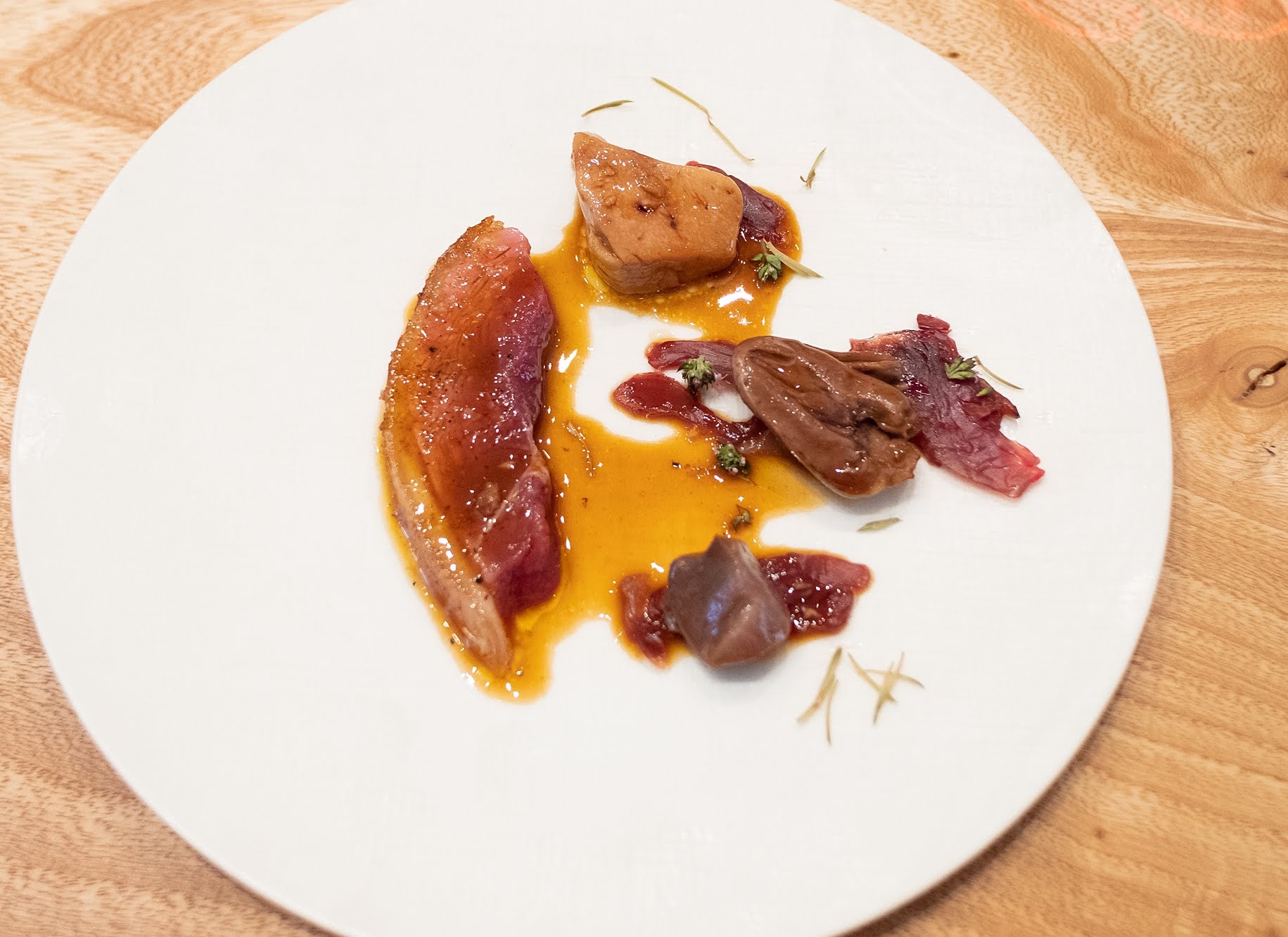 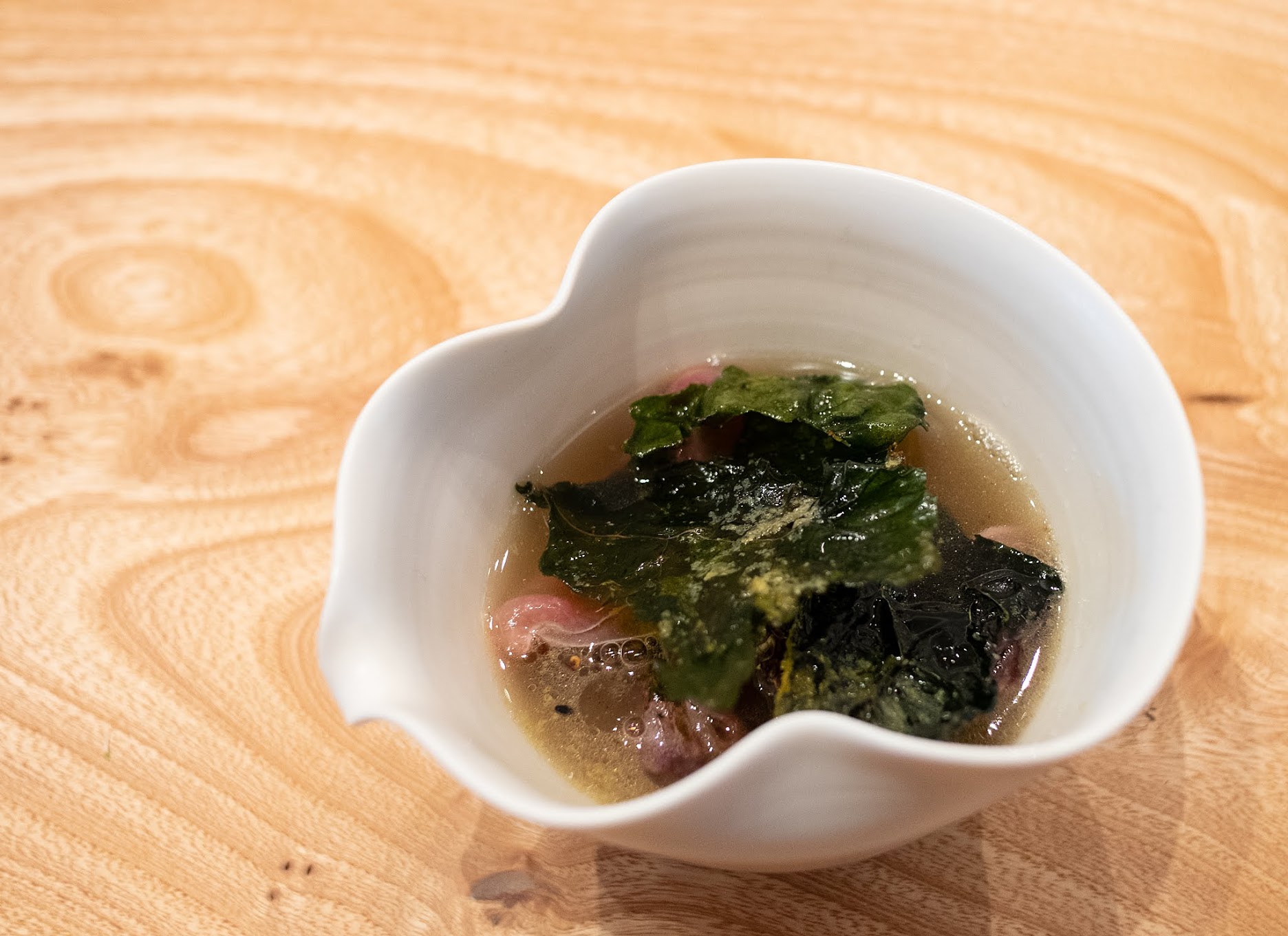 Grilled brassicas, boar meat
Grains, dried fruit, cultured broth
Boar meat was sliced thin and laid into the broth, shabu-shabu style. Brassicas of various shapes and textures were strewn in as well. A canopy of crispy kale dressed with nutritional yeast covered it all up. Again, I felt compelled to draw parallels with Saison’s brassicas – this lacked the purity of the original, but made up for it in punchiness. 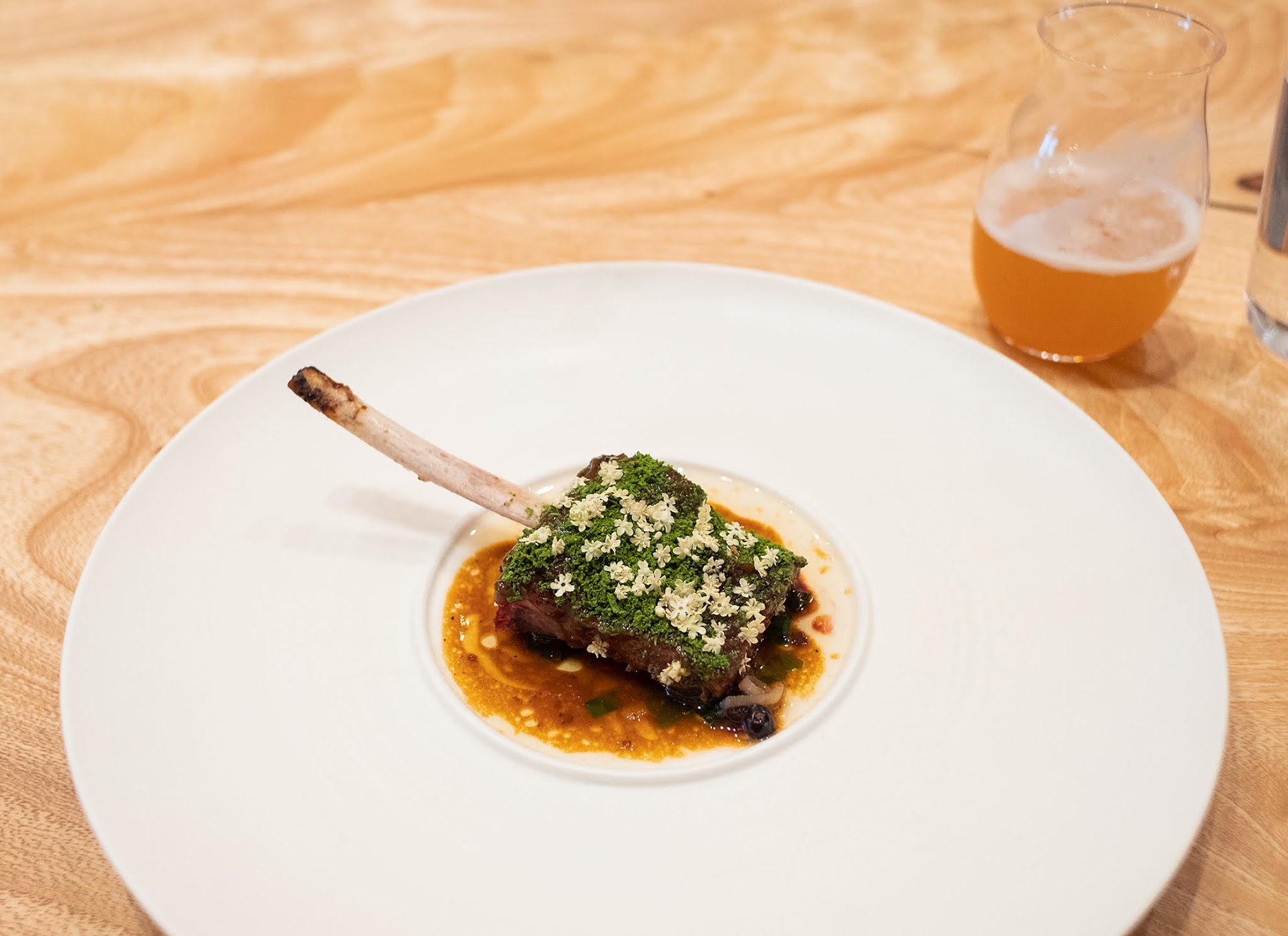 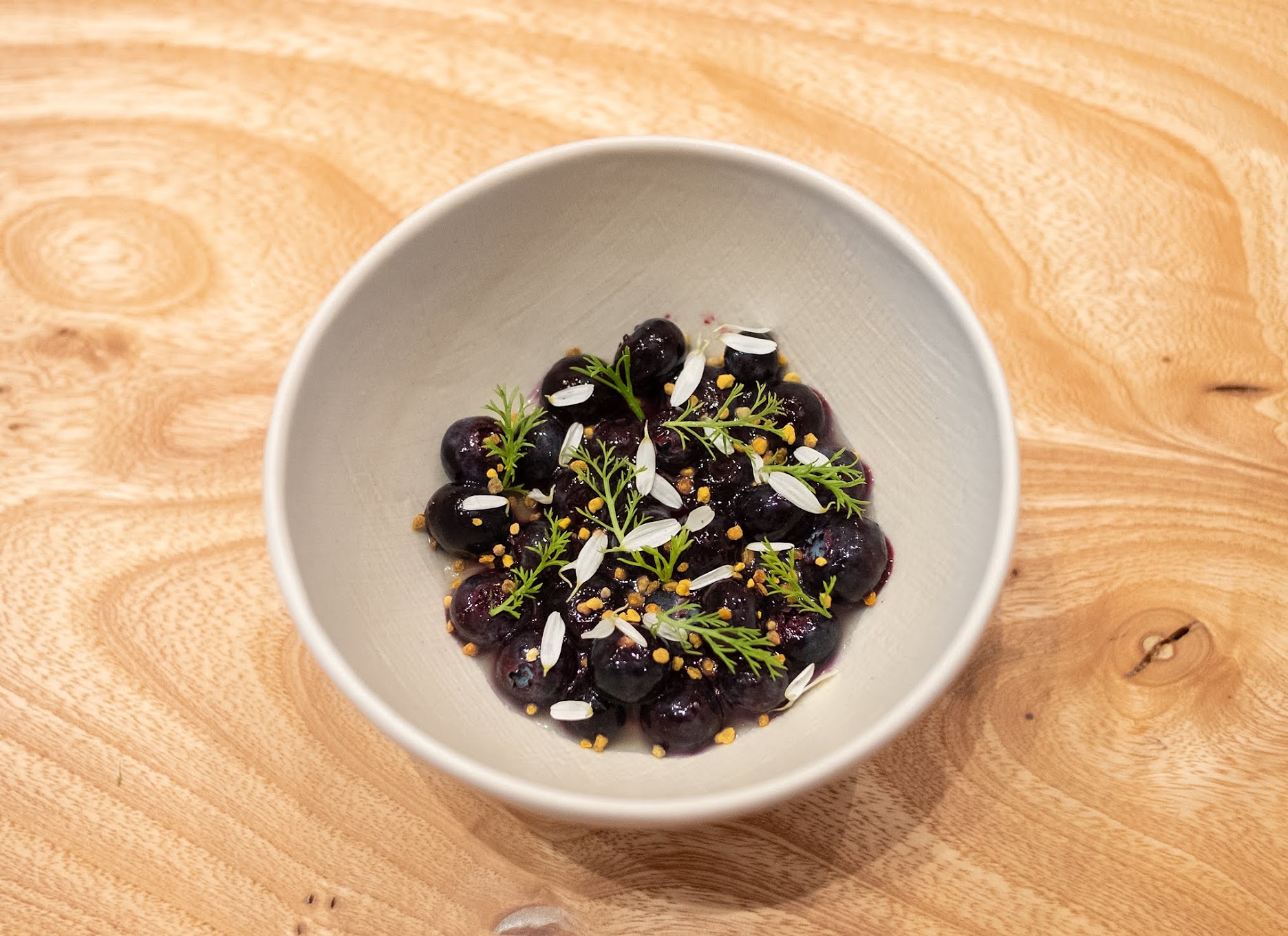 Blueberries, honey panna cotta, bee pollen, chamomile
After five straight courses of rich ingredients, this was a very welcome and refreshing dessert. Whether by intent or accident, the blueberries were quite tart – an excellent pairing with the lightly sweet panna cotta. 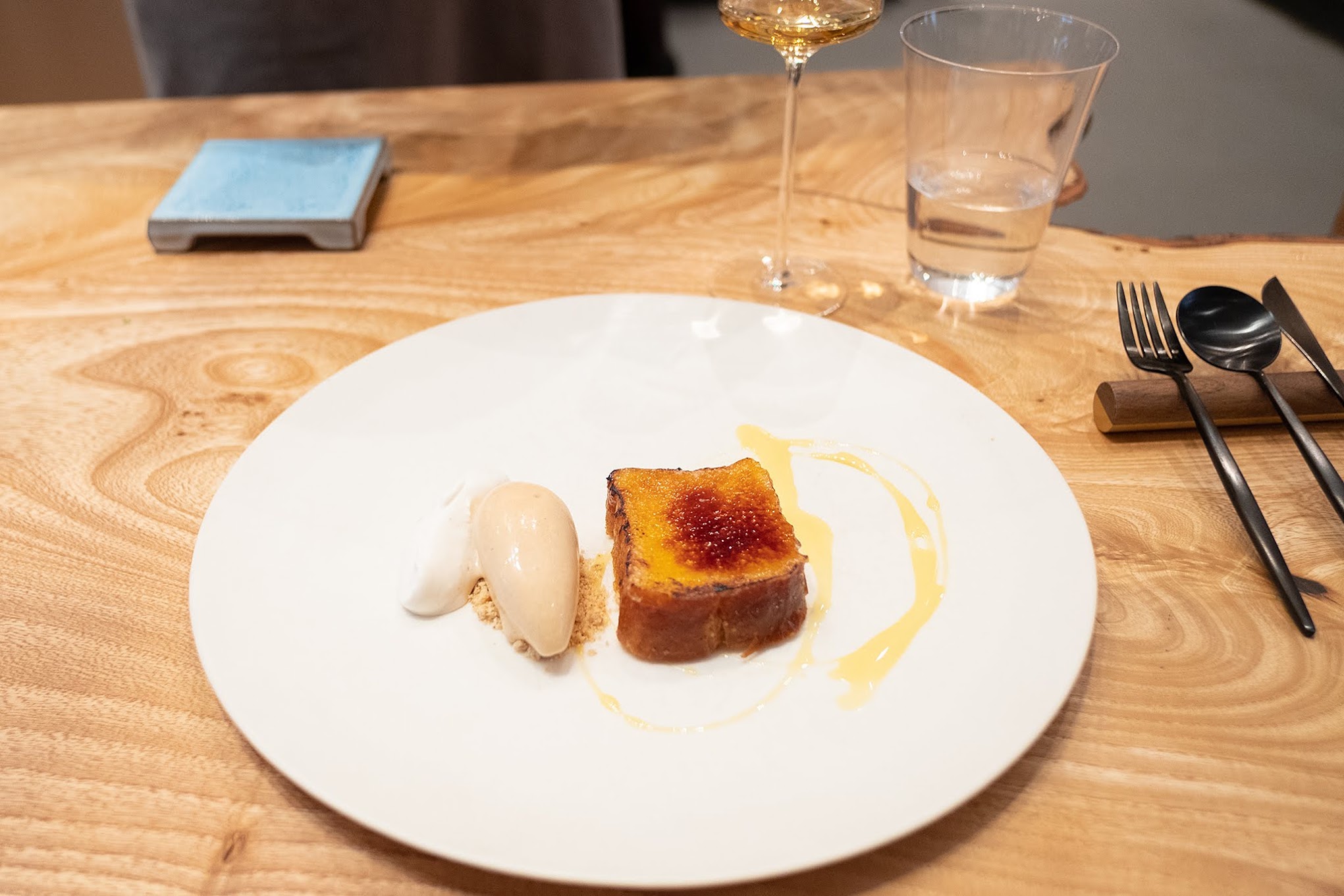 It was mentioned to me a number of times that the restaurant is inspired by the cuisine of the Pacific Northwest. I must confess – the connection was a little lost on me and I’m not quite sure what the kitchen’s intent is in that regard. However, the food was excellent (if rather rich towards the second half of the menu) and this team is certainly one to watch. I think Birdsong is quite an exciting new addition to San Francisco, and I intend to return to watch it grow.