I’ve found that collaboration dinners are most meaningful when you’ve first experienced each restaurant individually, in its respective place. Having done this, one can best appreciate the synergy that develops from the meeting of minds. We had outstanding meals at both Smyth and The Willows Inn (indeed, within weeks of each other), so a collaboration between these groundbreaking chefs seemed like a can’t-miss event. This was in fact the first of a three-part dinner series (one at each restaurant) – although we’re sad to miss out on the other dinners, we were fortunate to dine at the inaugural evening at Single Thread. 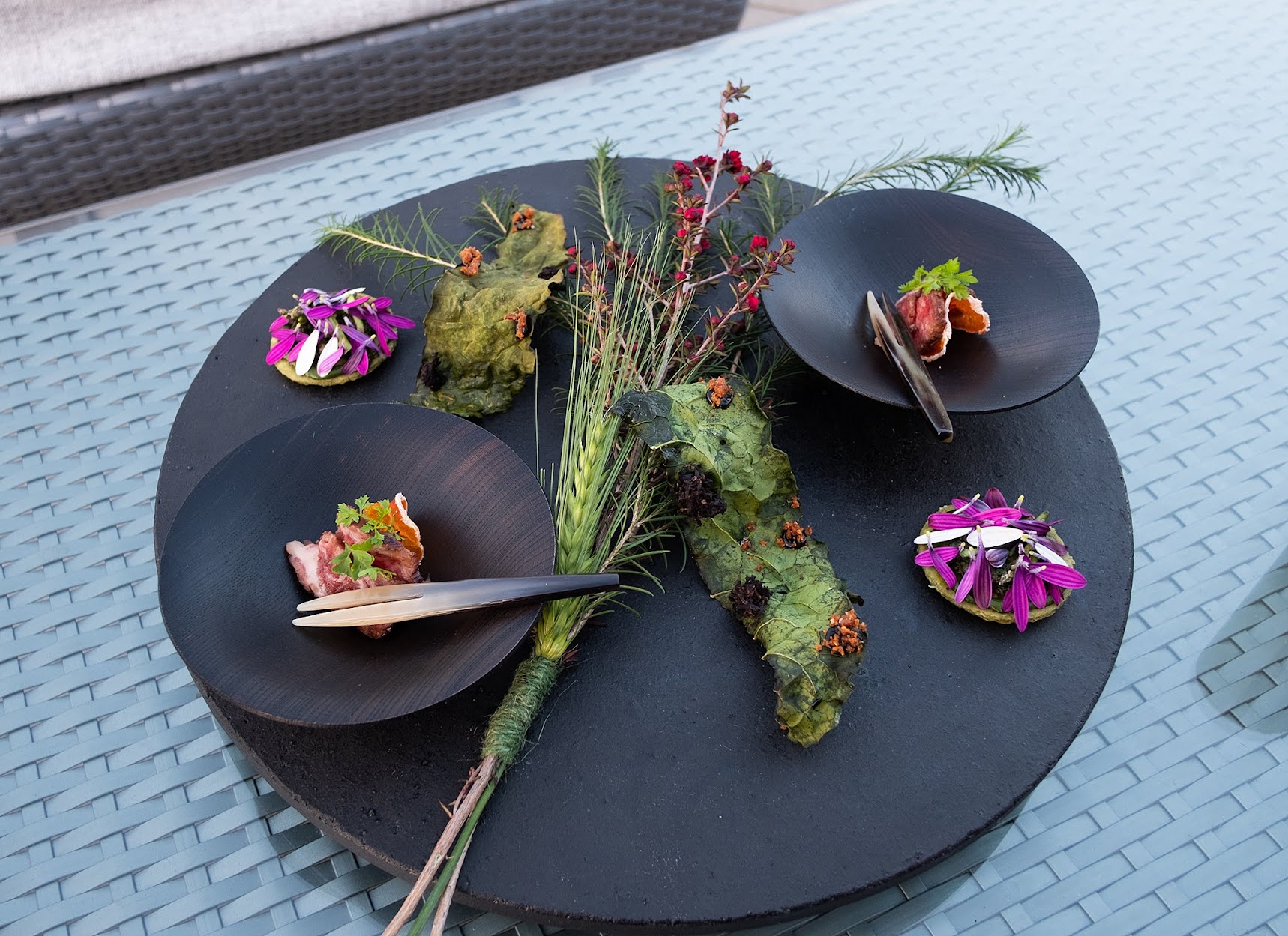 Snacks
It was a pleasant evening, so we started with snacks on the rooftop. Single Thread put out a bite of hoshigaki and Miyazaki wagyu – sweet and slightly gamey. Smyth’s offering was a crumbly sea lettuce cookie with baby asparagus. Finally, The Willows Inn delivered a fried kale leaf with black truffle emulsion and rye crumble – my favourite of the trio (and an amuse that we also enjoyed on Lummi Island). 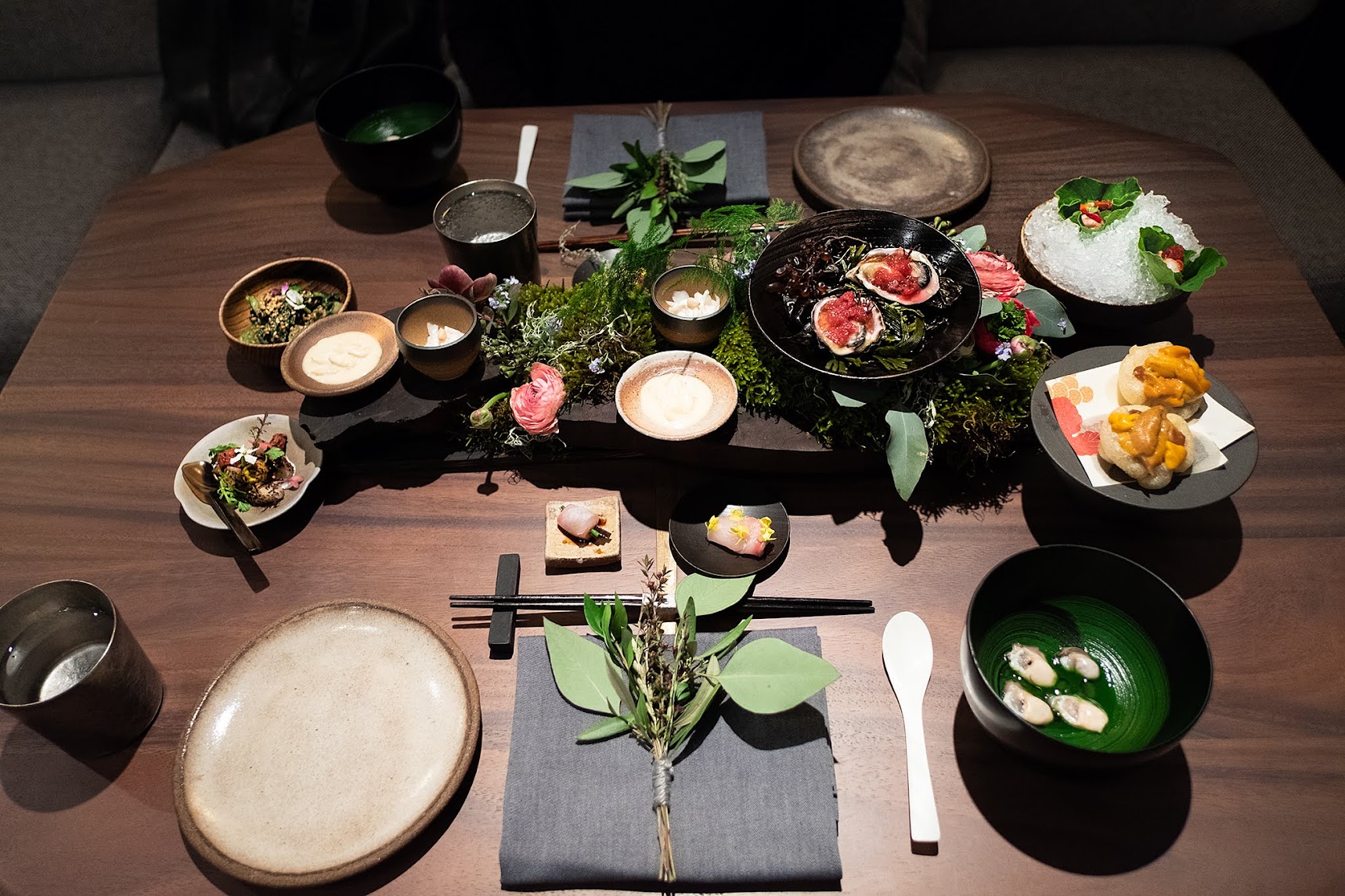 Early Spring in Sonoma, Illinois and Lummi Island
Moving indoors, we were greeted with the night’s hassun course, this time from all three restaurants. A few tastes stood out as exceptional – (1) tatsoi and roasted sesame; (2) green almonds with miso; (3) Kusshi oysters with strawberry and turnip; (4) carrots confited in wagyu and served with a sumac buttermilk. 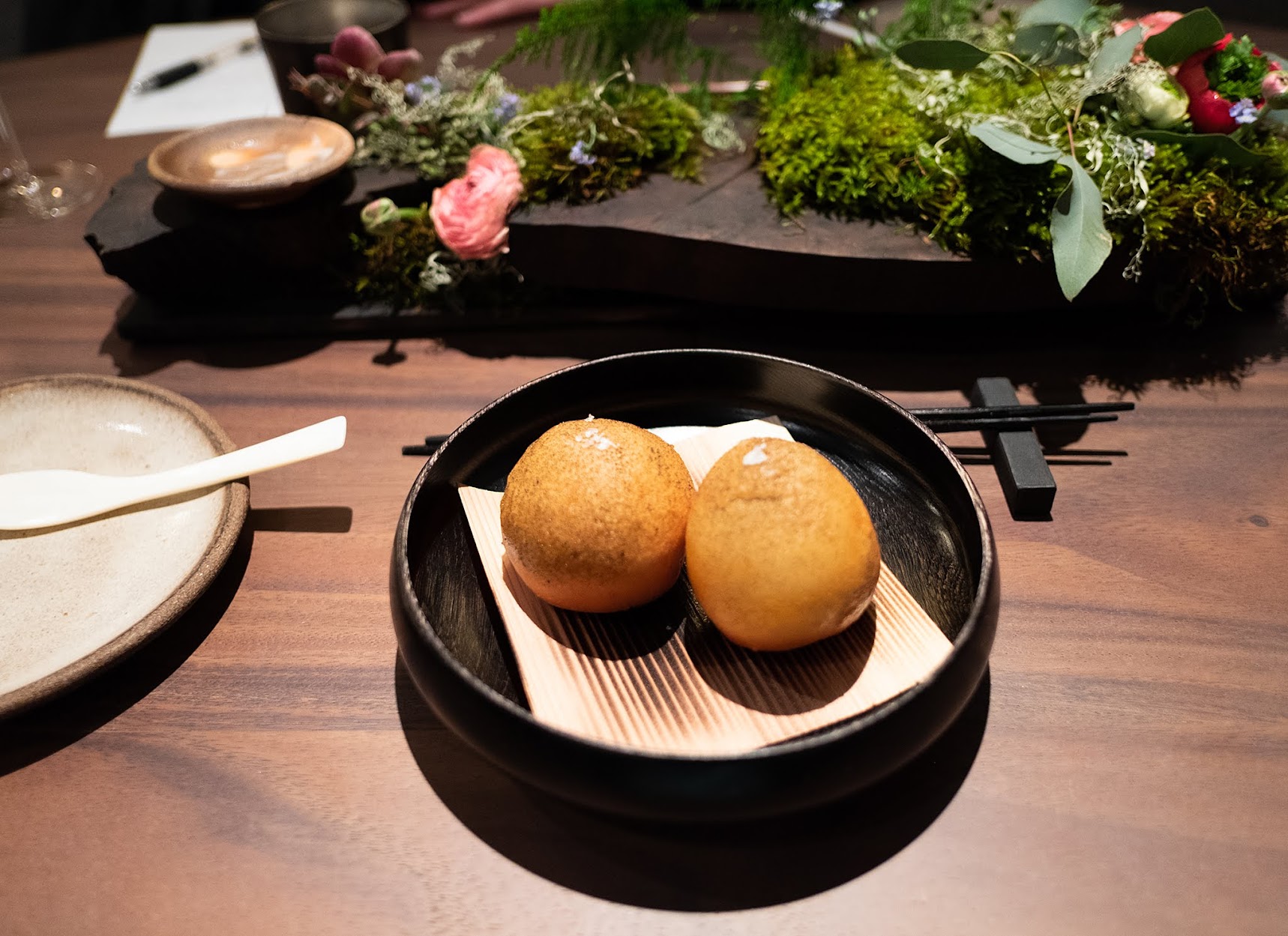 Sourdough donuts, smoked black cod, porcini (The Willows Inn)
As we were enjoying the spread, the kitchen brought out these warm, springy donuts – another snack we recognized from Lummi Island. The level of smoke on the cod filling was delightful – an excellent morsel. Oddly, the kitchen overlooked serving us some other warm dishes that we saw other tables receive. Despite a gentle nudge from us and an acknowledgement of the error, only one other item eventually came. By then, we were a few dishes in and decided not to press our case (but Single Thread – if you happen to read this… let’s not repeat it next time?) 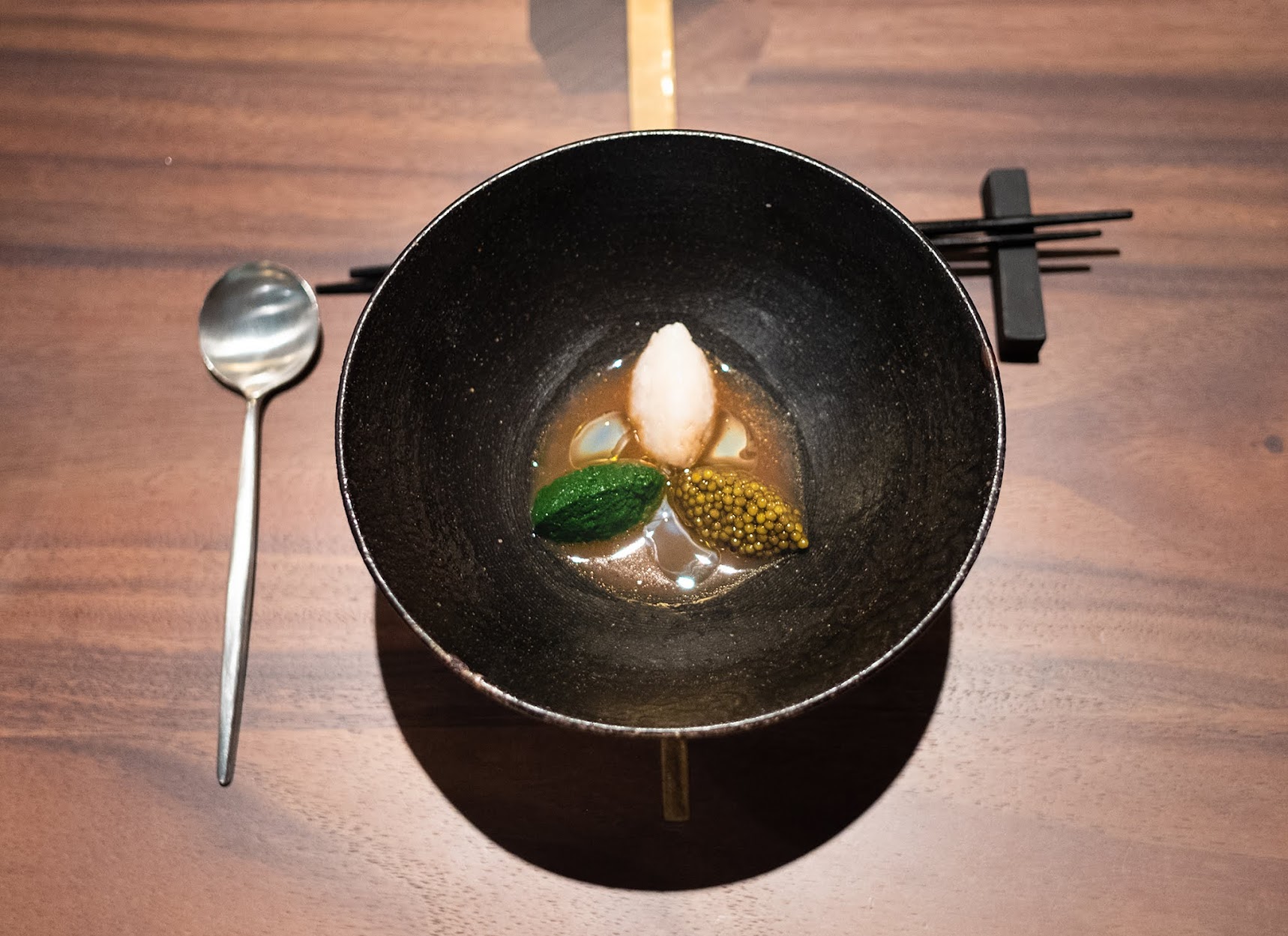 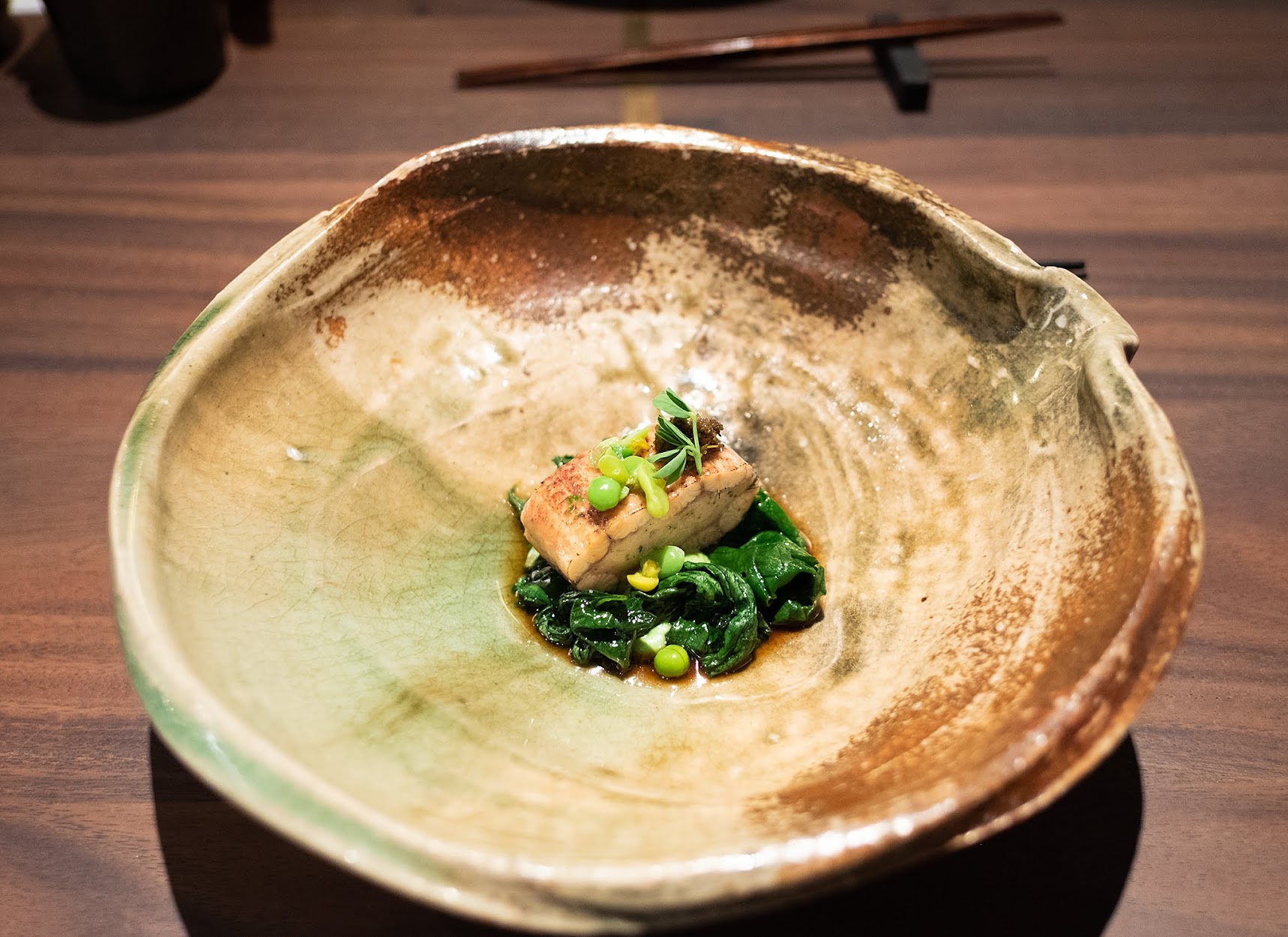 Wild anago and scallop (Single Thread)
Snap pea greens, red kitten spinach, tatsoi
A new dish from the Single Thread team was my favourite of the night! The texture of the anago, wrapped around a mousse of scallop, was heavenly. Everything about the vegetables screamed seasonality and simplicity – perfection. 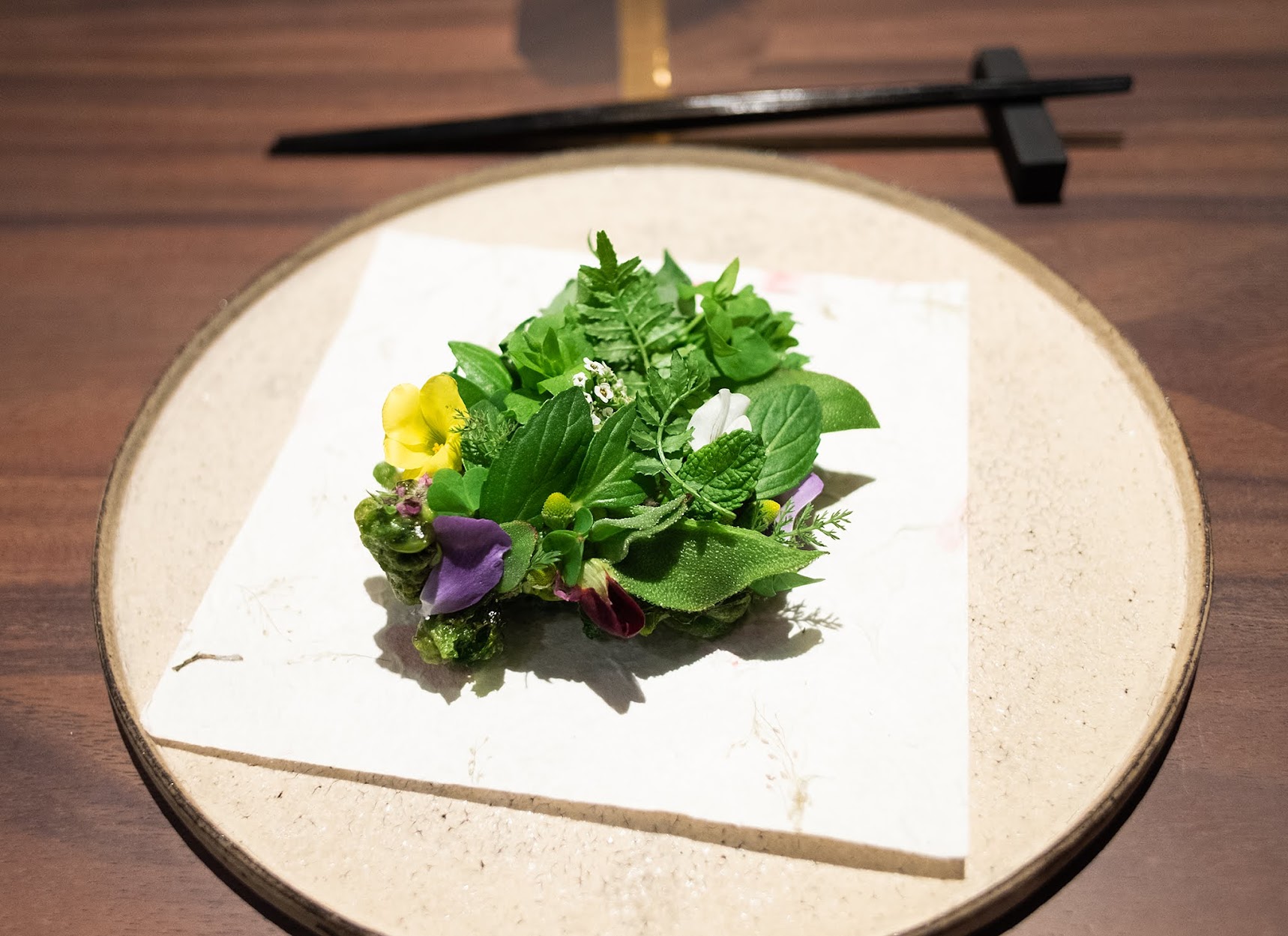 Sonoma herb tostada (The Willows Inn)
Shio koji vinaigrette, steelhead roe, myoga
Practically a signature of Blaine Wetzel’s, the tostada was as good, if not better than the version we had at The Willows Inn – must be those Californian (nay, Sonoma) herbs. There was incredible complexity in the greens and their interplay with the vinaigrette. Very, very, impressive. 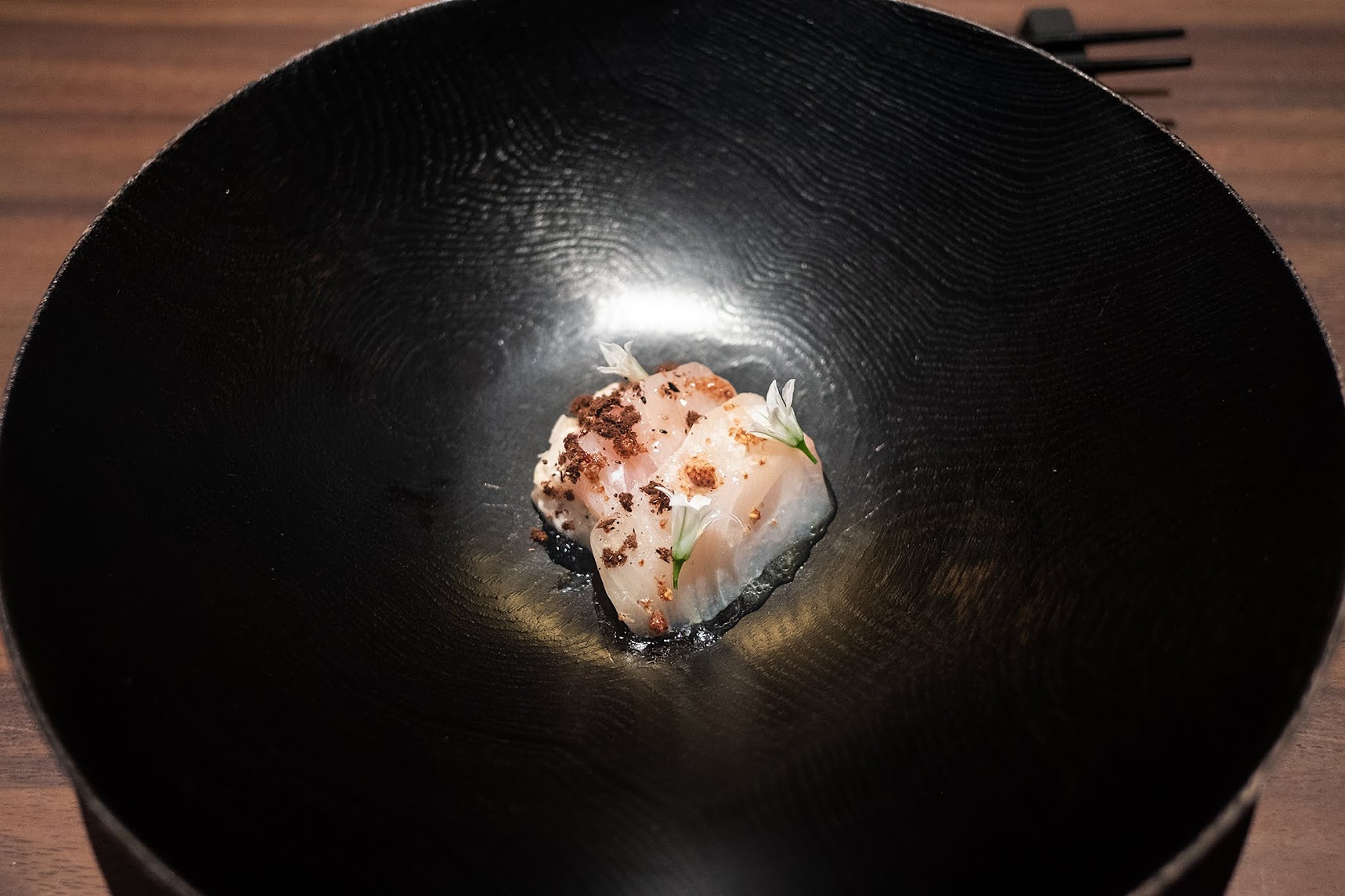 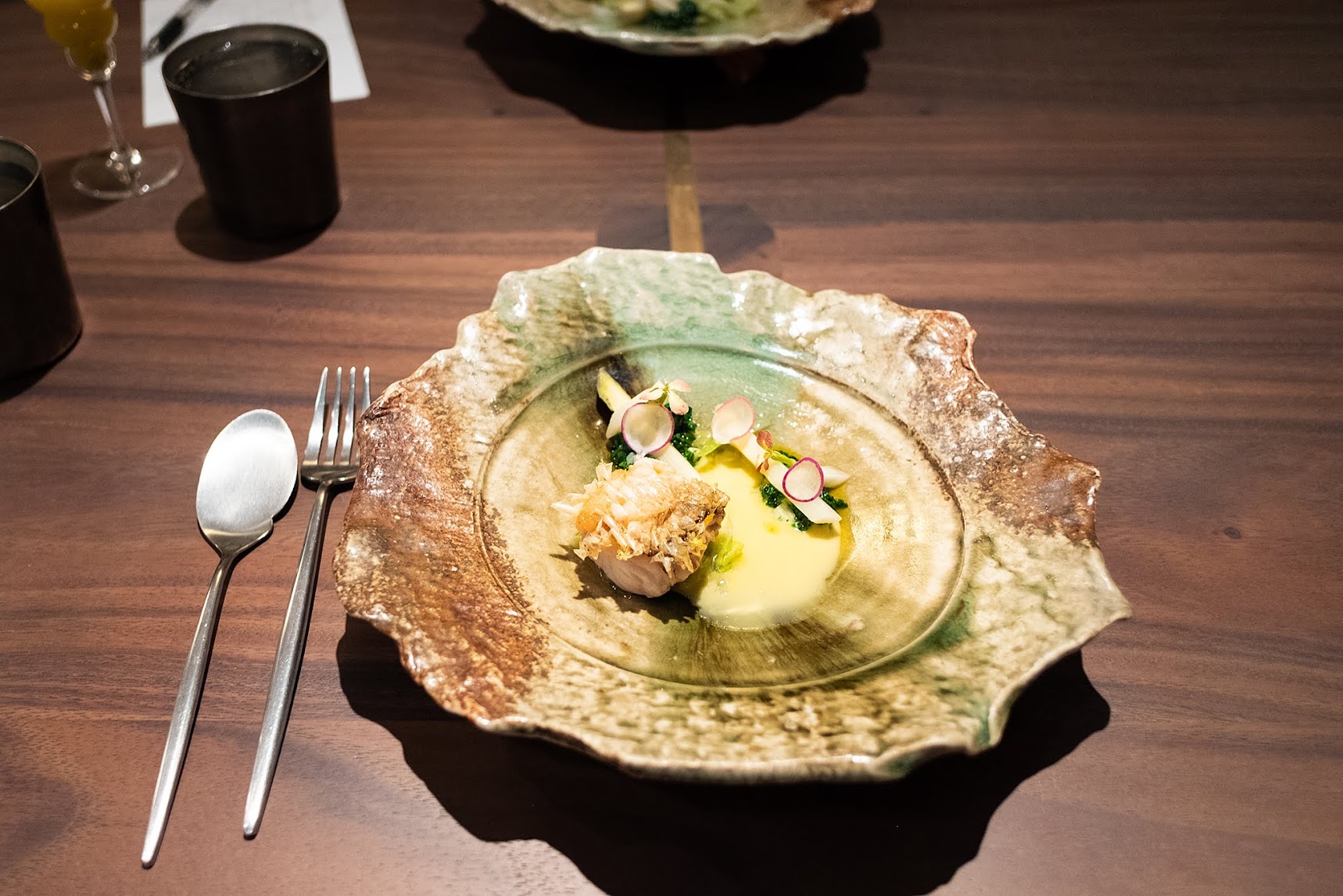 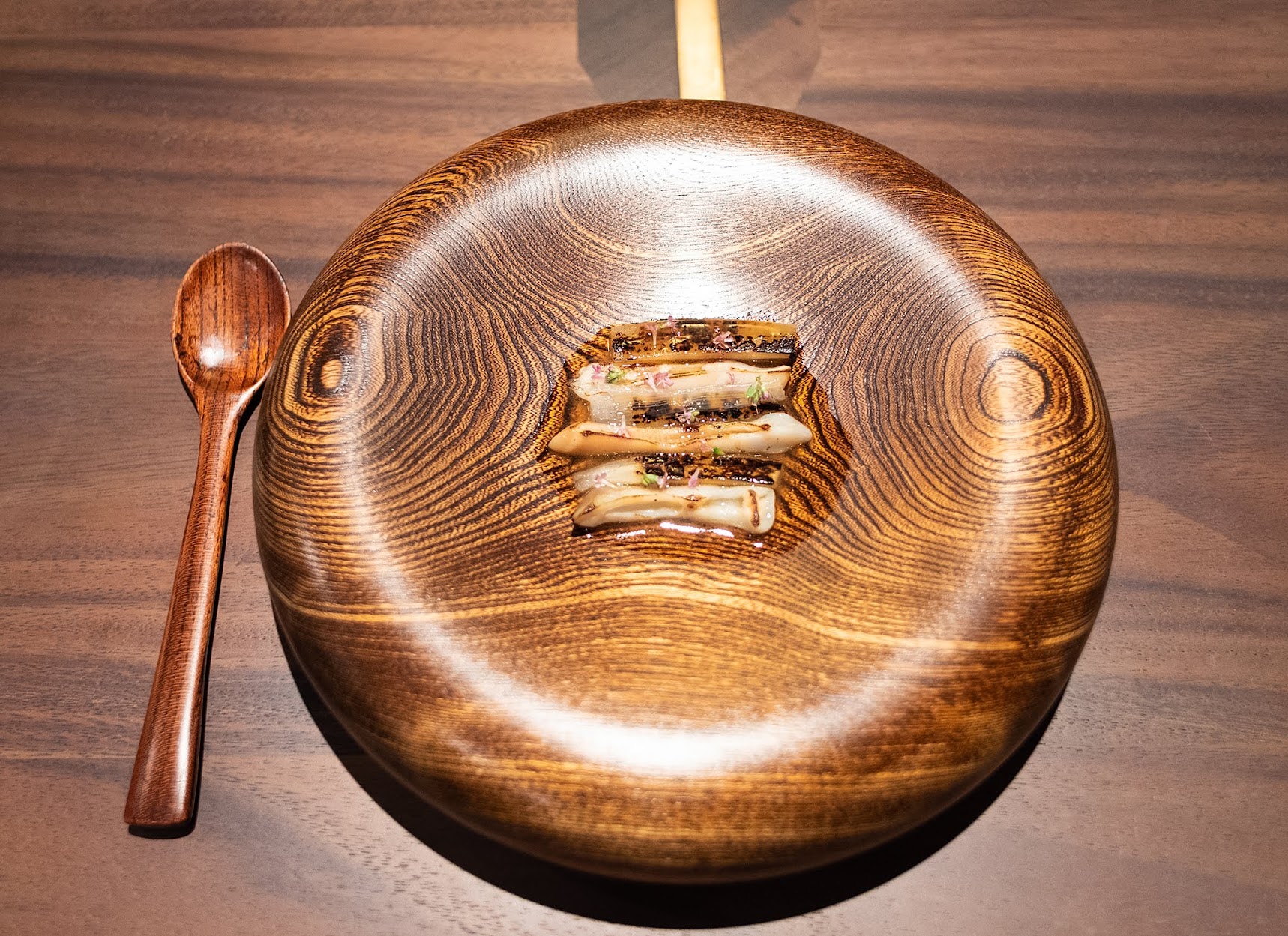 Grilled salsify and razor clam (Smyth)
Yeast oil, mussel caramel, dried scallop, guinea hen jus
Days after our meal, this is the course I come back to and think about most. It did not initially blow me away, but there are layers upon layers of texture and flavour here. The relatively simple presentation belies the work and techniques put into each component. It is a (dare I say) profound dish. I would very much like to revisit a few bites. 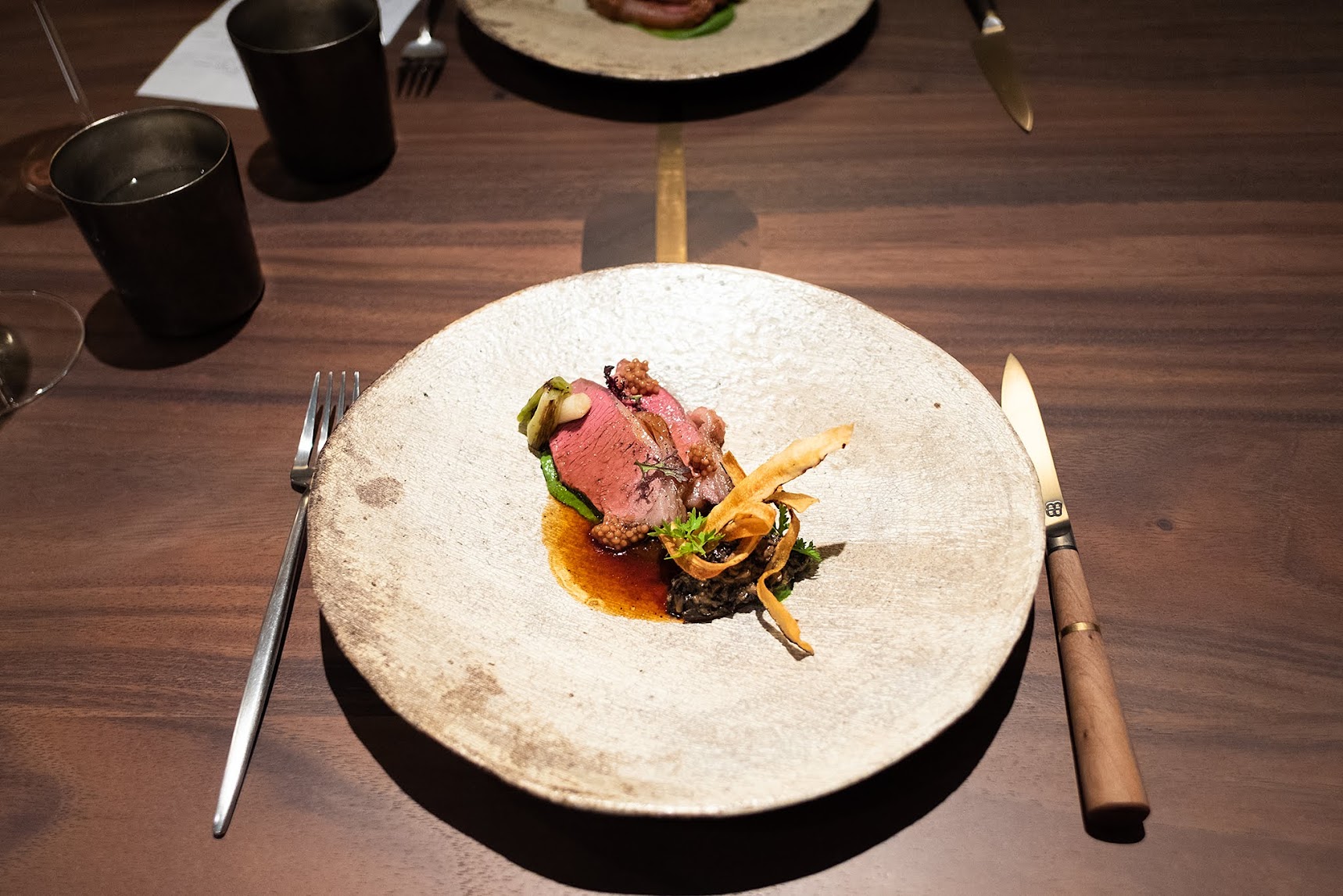 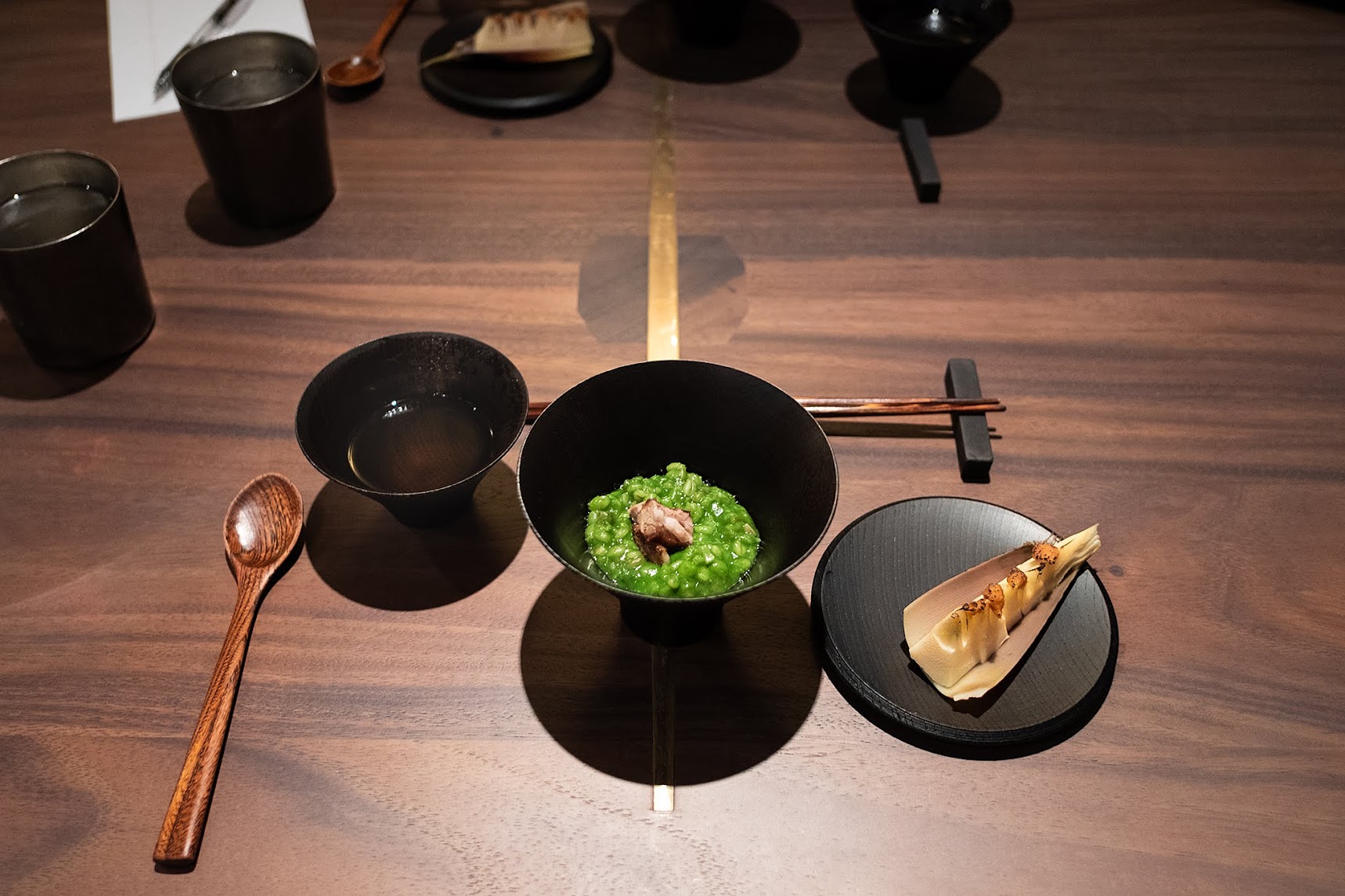 Sonoma grains and bamboo (Single Thread)
Mugi mochi, lamb belly, nettle ochazuke, ice-filtered lamb broth
Five years ago, we visited Japan during the peak of takenoko (young bamboo) season, and eating it daily on the trip broke me down – I still haven’t recovered… until now. This was a perfect savory finisher – using parts of the lamb from the previous course, while bringing in the miso-basted, grilled bamboo (which still had that characteristic freshness). The hearty grains, too, were beautifully cooked in a verdant nettle ochazuke. 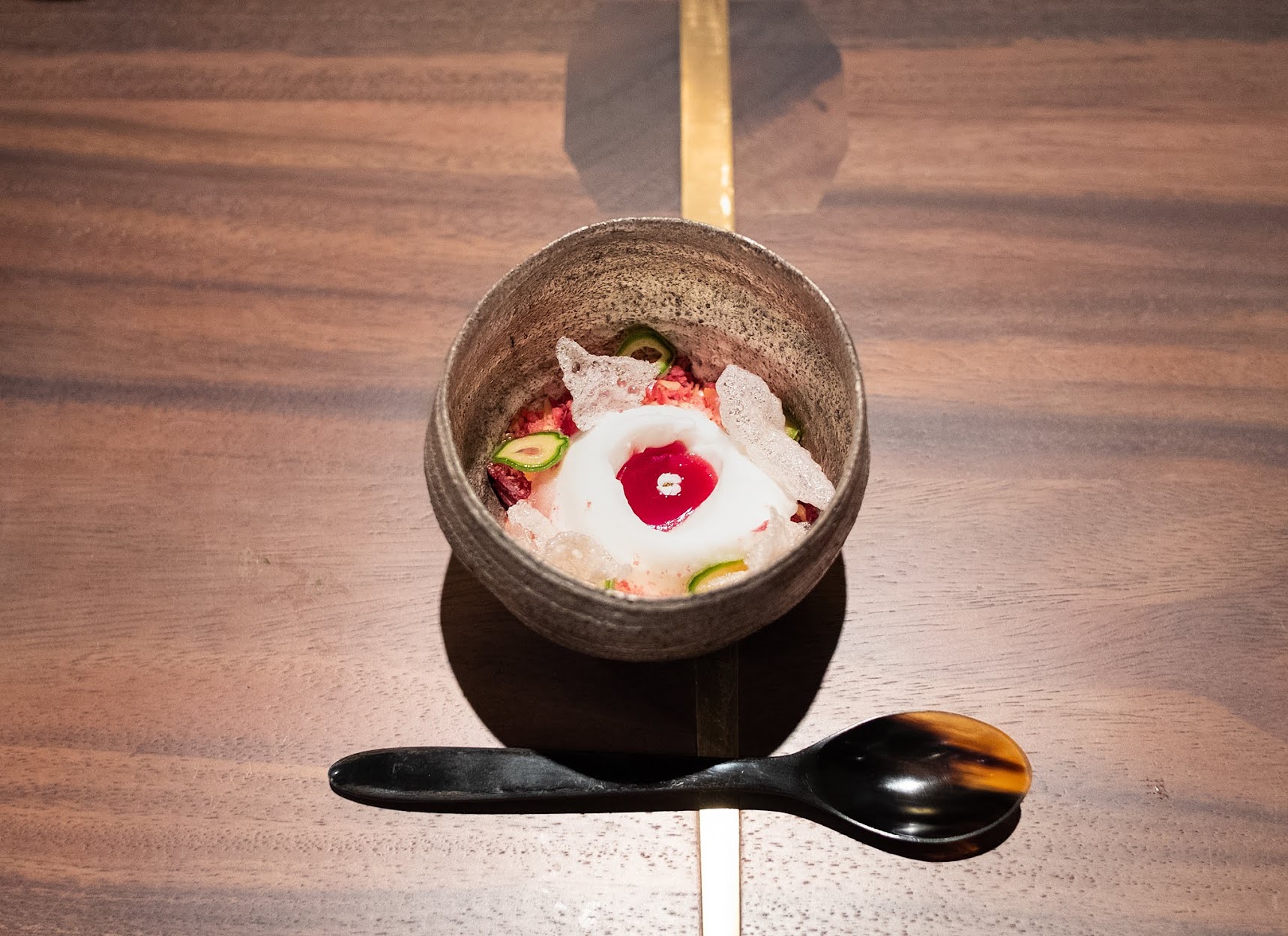 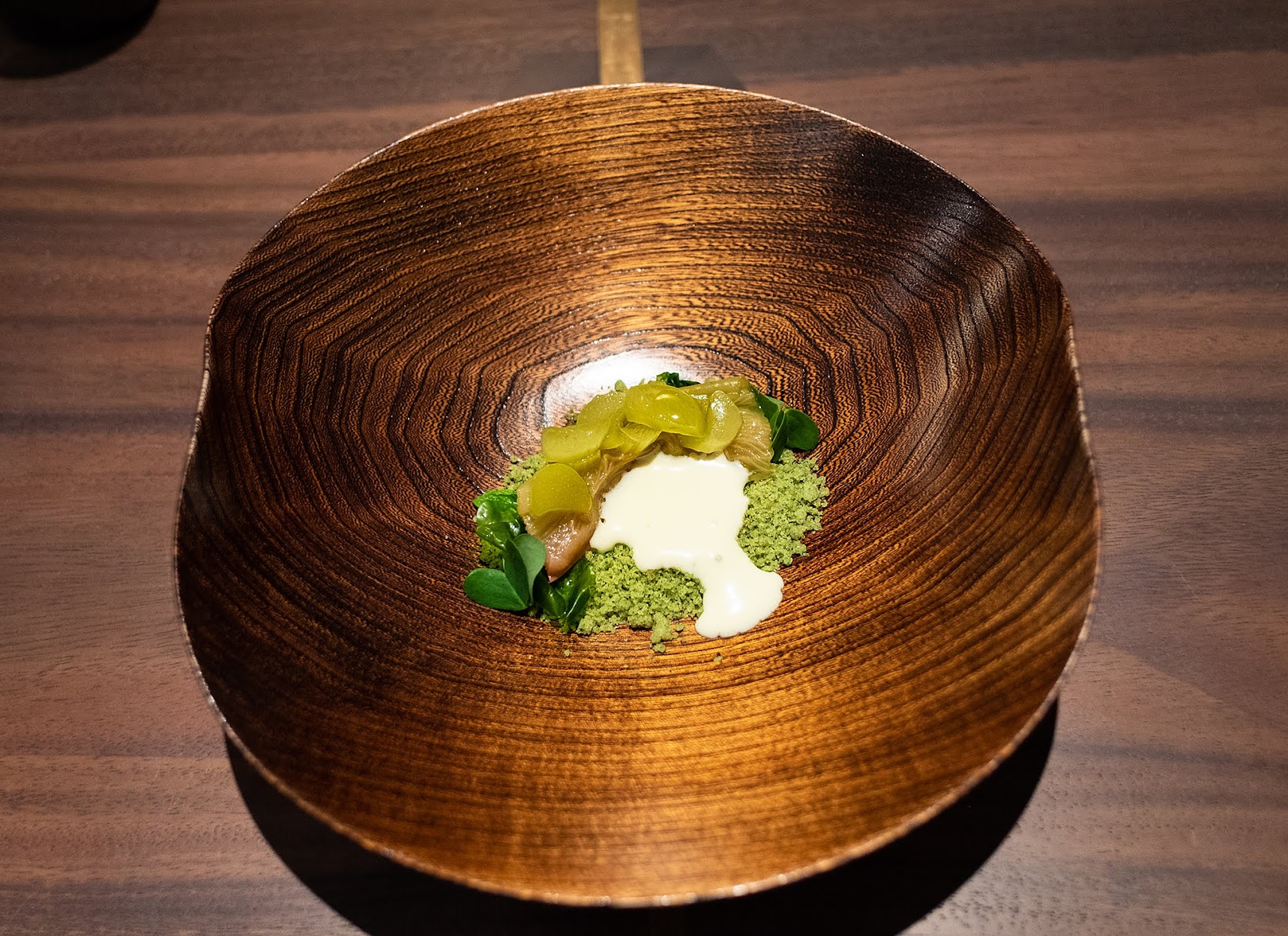 Sea lettuce cream (Single Thread)
Roasted rhubarb, mint, green tea
Pastry chef Matt Siciliano and I must be on the same dessert wavelength. This was really, really good – like an elusive, dream-state version of matcha ice cream. Excellent use of the rhubarb and mint to brighten up the creamier, richer elements. 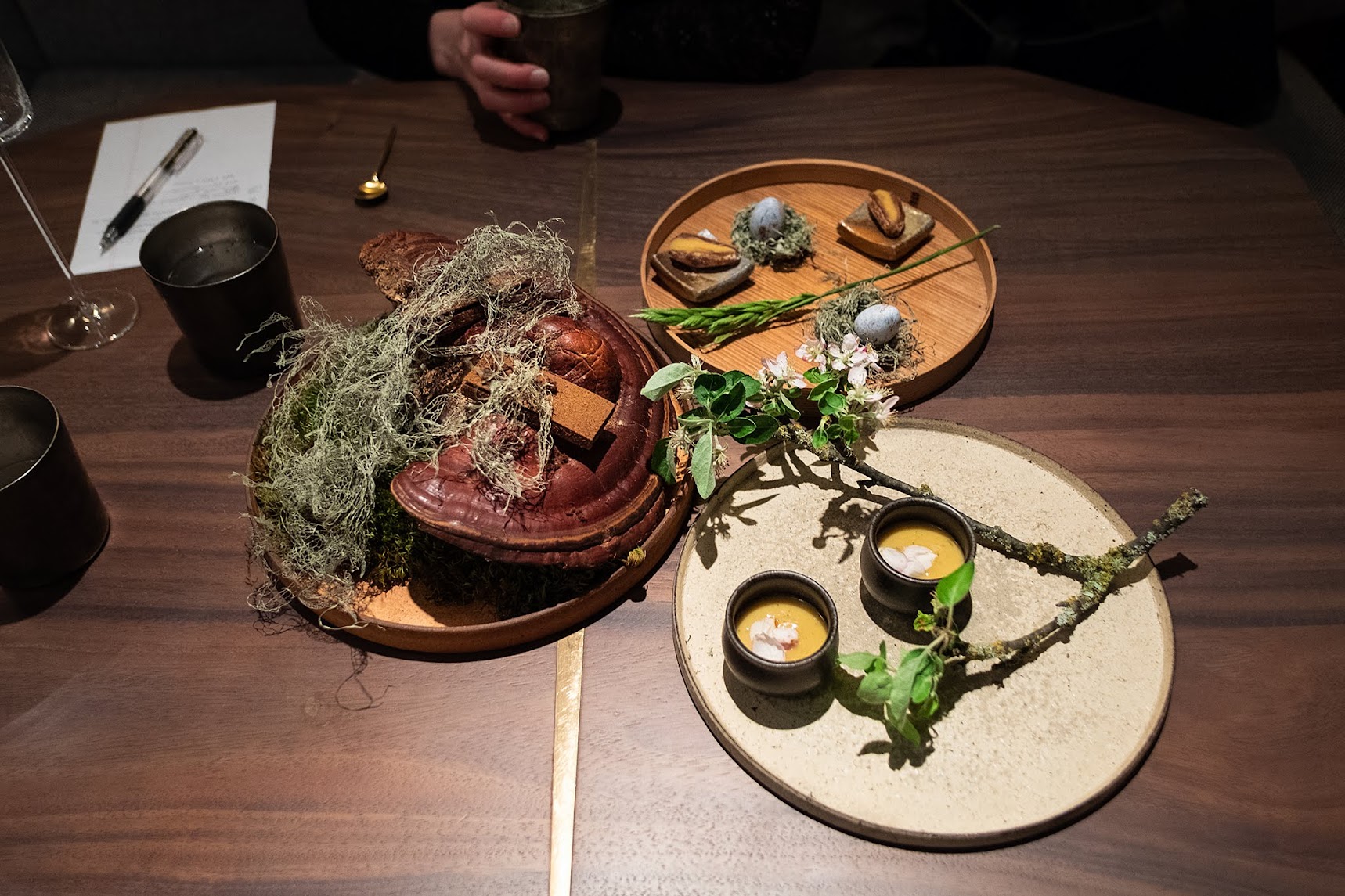 Wagashi
A round of sweets finished us off. The bowls of apple blossom pudding from The Willows Inn were great, and new to us. From Smyth, something familiar – a bar of milk chocolate ganache with preserved berries and powdered shiitake. Interestingly, we learned that the hard brown object upon which the bars were perched is a local mushroom similar to reishi, foraged by Single Thread’s Candice Koseba – some of it was also shaved over the chocolate bars to lend it a slightly medicinal hit. Fascinating.

Service kerfluffle aside, the food more than lived up to expectations – I expected no less from chefs who not only have great talent, but seem to be genuinely nice people. Perhaps because of the home court advantage, Single Thread delivered our favourite courses of the night – this is no knock on the other dishes, but speaks to the magic that can happen when a kitchen opens itself up to an exchange of minds. If tonight was any indication, the diners at the next two dinners are in for a real treat.