Our first meal at Coi was in 2013, when Daniel Patterson was still in the kitchen. Then, our second experience took place with Matthew Kirkley at the helm. We visited early in his tenure and enjoyed a solid, but not extraordinary, dinner. Evidently something changed, or Michelin just disagrees with us, because they eventually awarded the restaurant three stars. Now, however, the baton has been passed to Erik Anderson, and so we dutifully made the trek to Broadway Street to experience Coi 3.0. 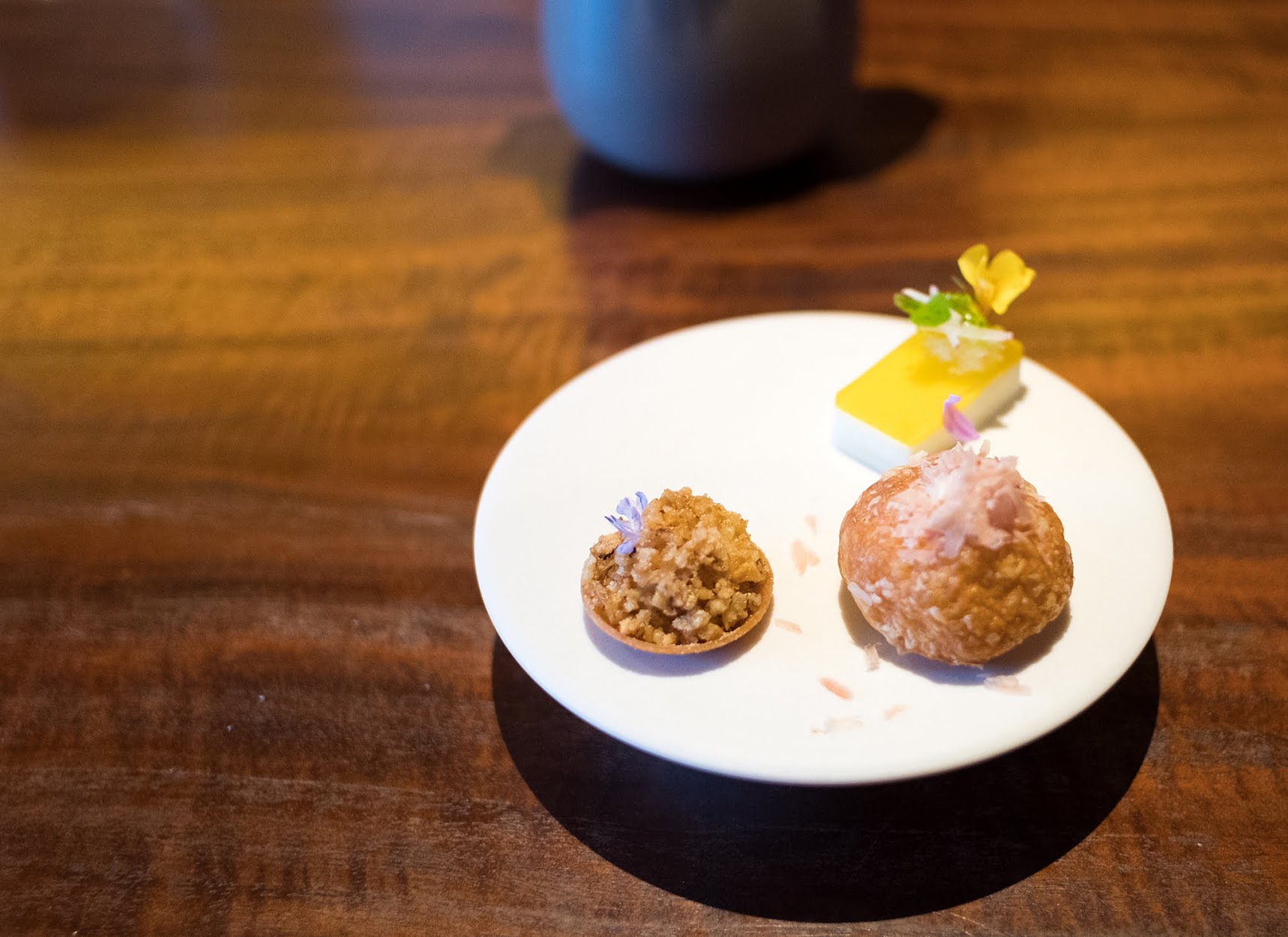 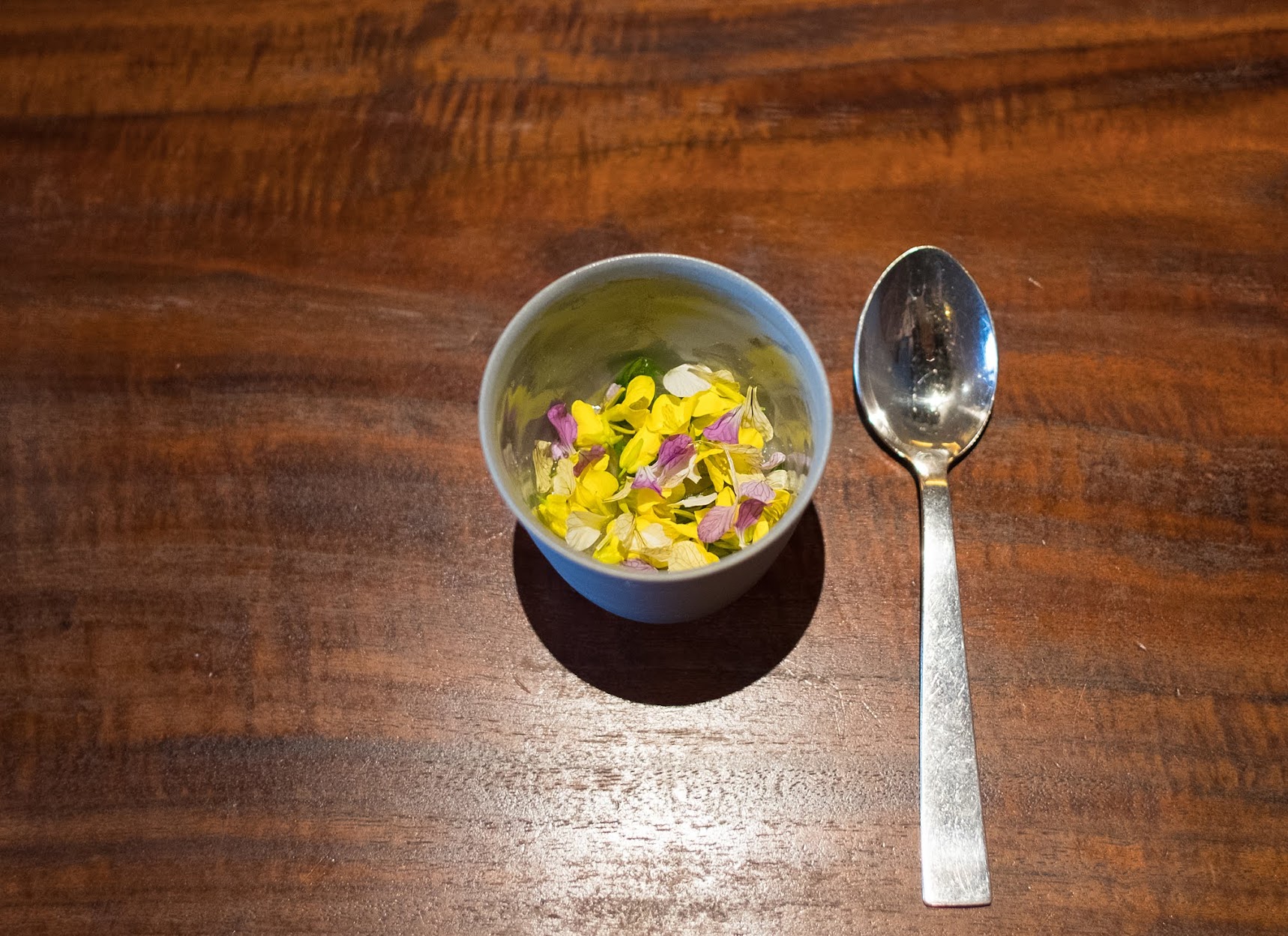 Geoduck
Duck cream, clam gelée, green onion
Lightly blanched geoduck was served with an earthy duck cream and a briny gelée of Manila clams. The whole concoction was hidden beneath a bloom of snappy mustard and radish flowers. Really good – one of our favourite dishes of the night. 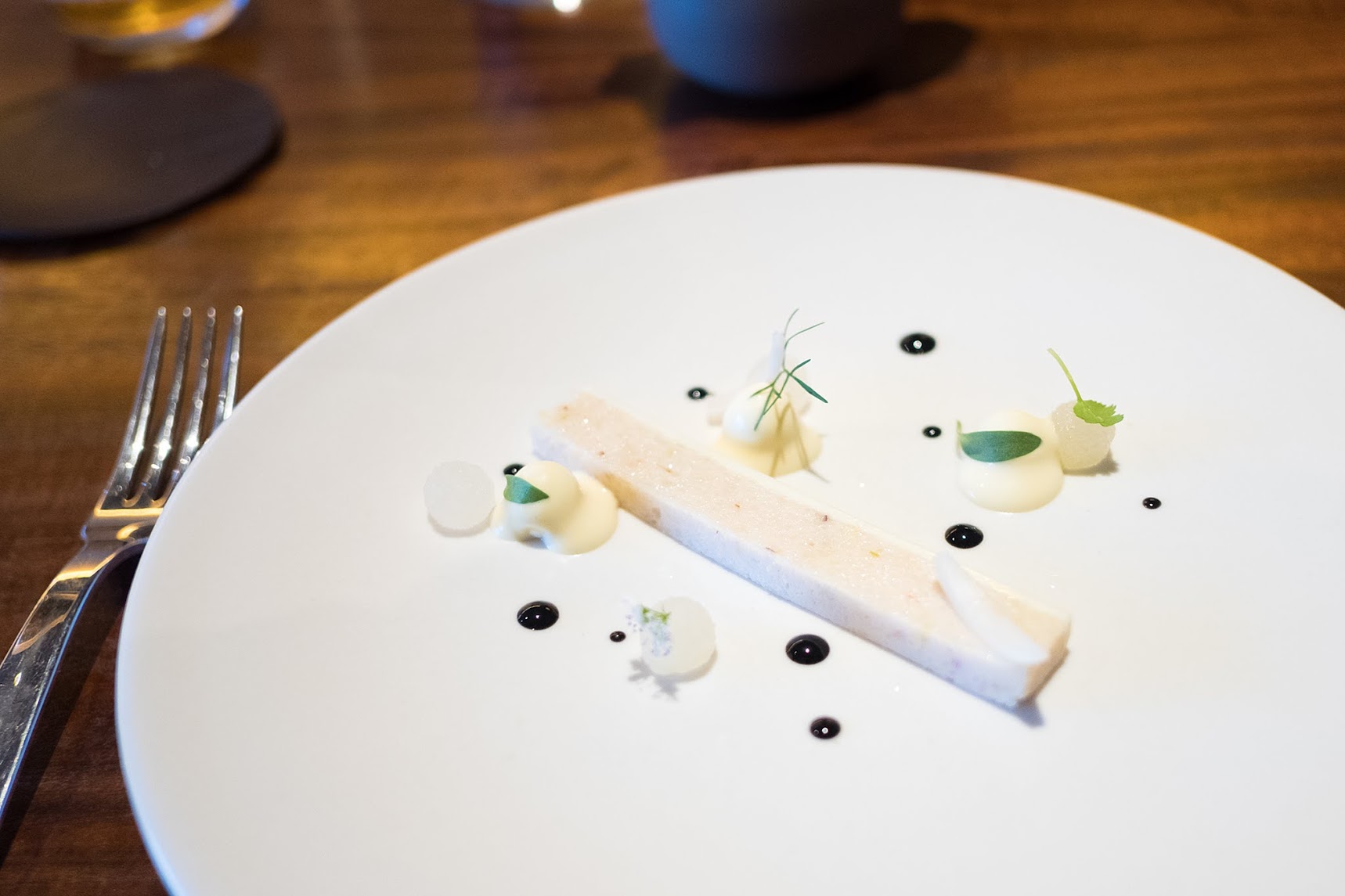 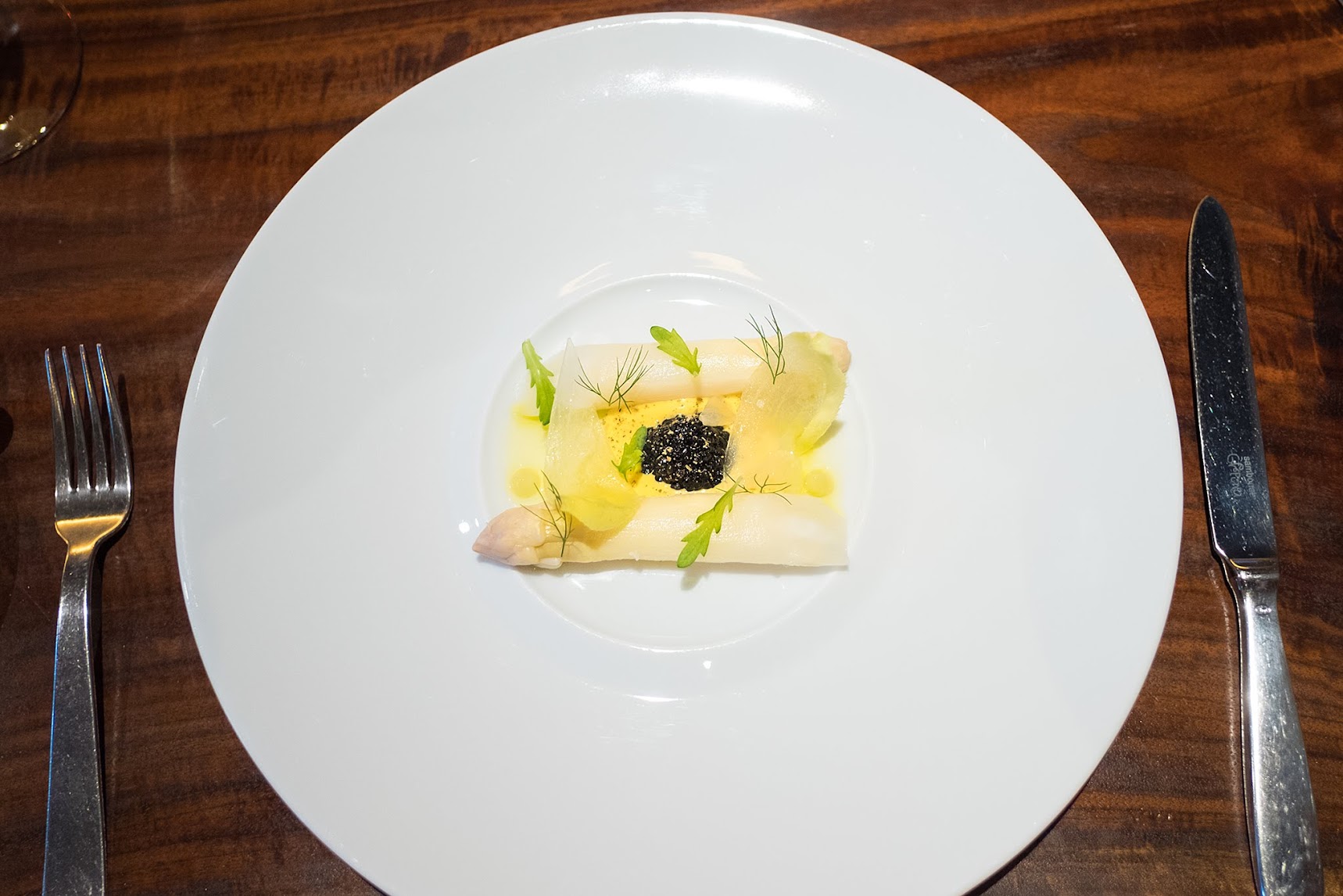 Chilled white asparagus
Caviar, grapefruit emulsion, Belgian endive, fennel
The caviar came from a local fish, caught by the chef and cured to the restaurant’s specifications. It was dusted with fennel pollen, which along with a fennel jam and the grapefruit, added the complexity that elevated the asparagus. An excellent dish. 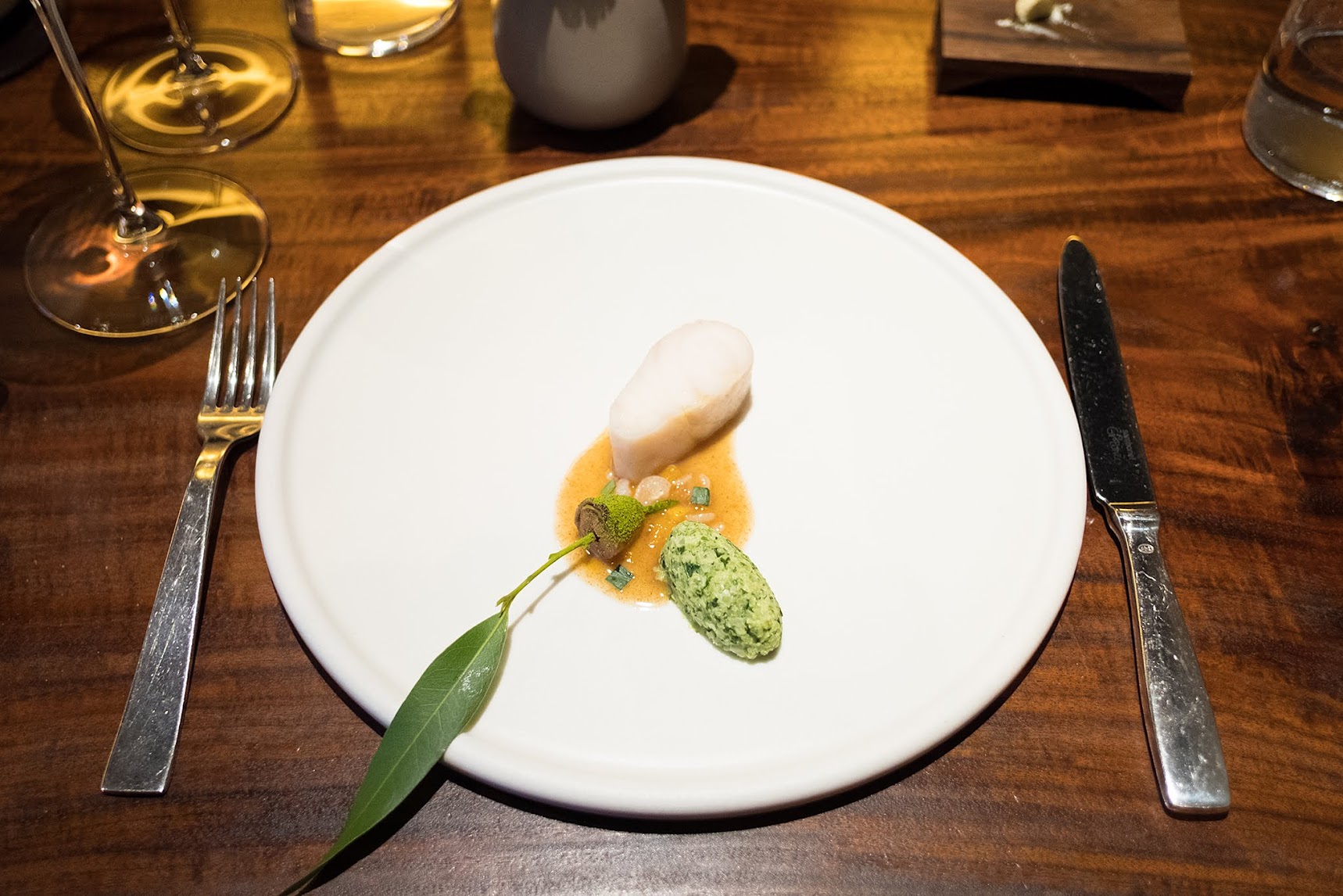 Sturgeon
Roasted chicken skin jus, bay leaf, melted cabbage, tarragon
My favourite dish of the night. The fish was poached in chicken fat, and had excellent texture. A chicken heart coated in bay salt was skewered on the bay sprig – tasty. The quenelle was composed of melted cabbage with crème fraîche and tarragon – rich in texture but sufficiently vegetal to balance the other components. 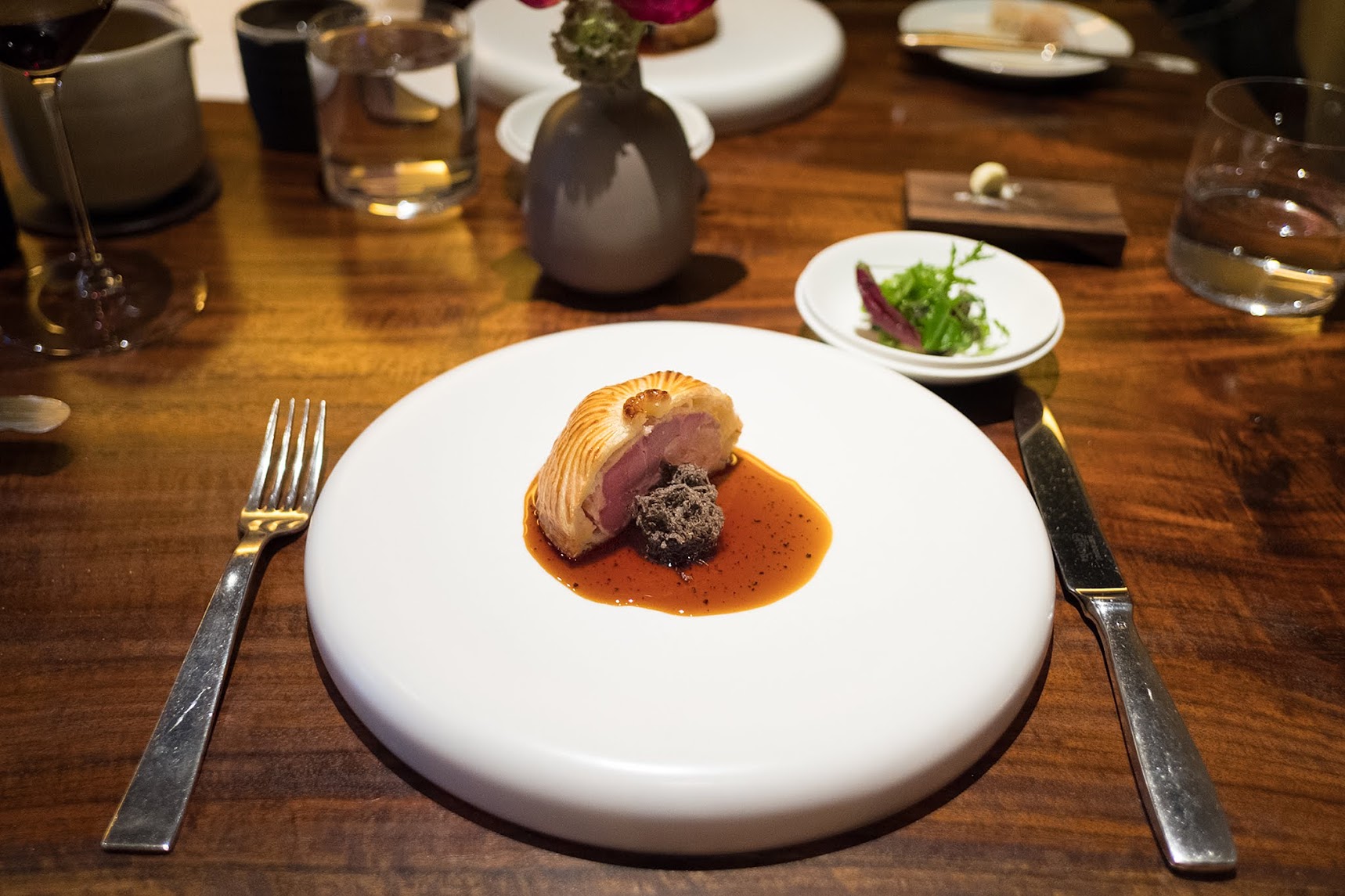 Tourte of duck, foie gras and sweetbread
Armagnac prune, black truffle, pine bud syrup
And now we ventured deep into classical territory. A sizable tourte with a rich, meat stuffing. There was a decidedly sweet bent to the sauce, perhaps meant to counter the fat. On the side, we were served a salad of winter greens and lettuce cream – a refreshing break from the meat-fest of the main plate. 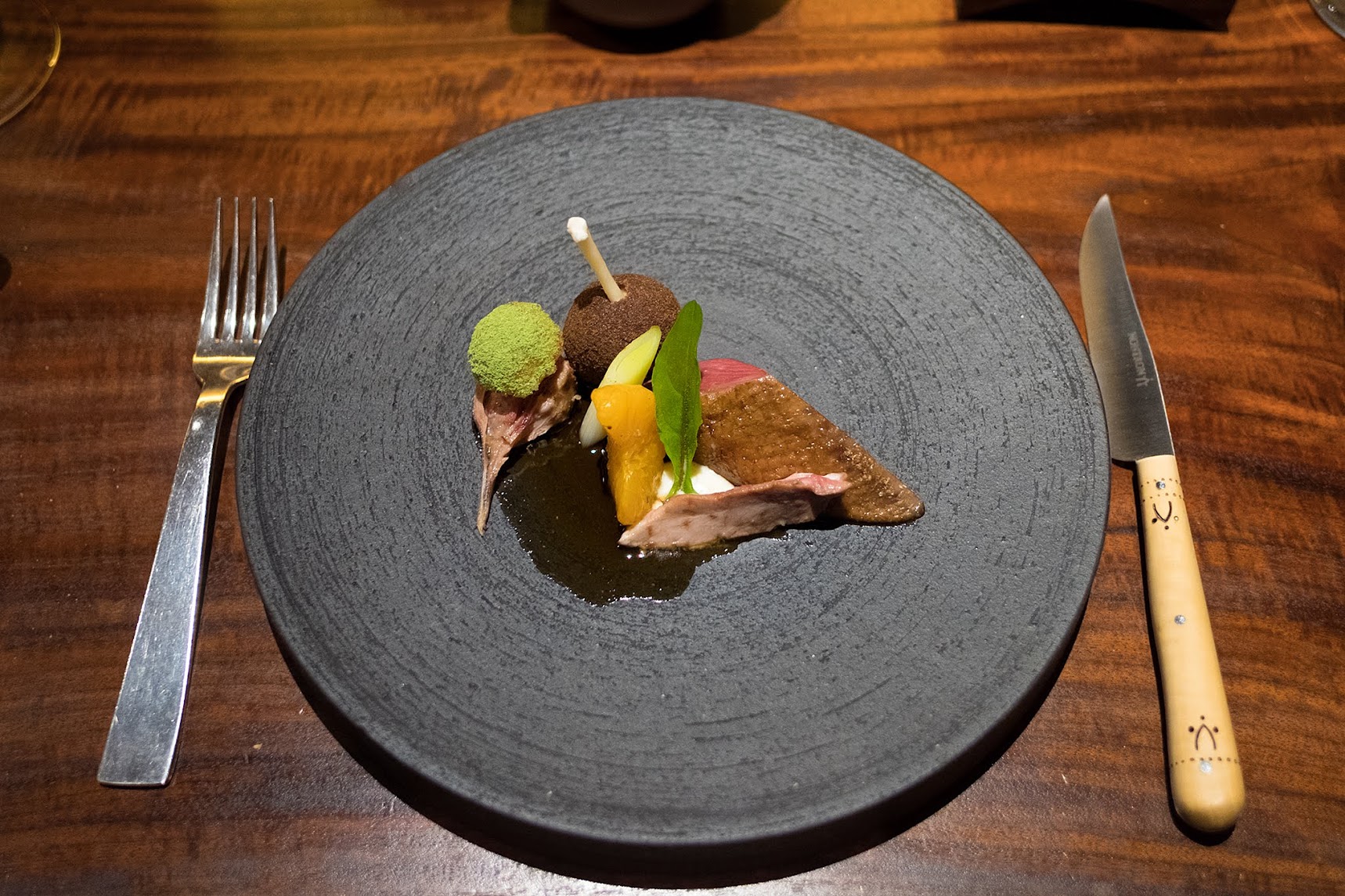 Dry-aged pigeon
Green garlic purée, sauce bigarade, pommmes soufflées
All the parts of the bird – breast, tenderloin, a pumpernickel-crusted drumstick of leg and thigh, and even the head (split in half so we could suck on the insides). Continuing the classical theme, it was served with sauce bigarade – the supreme of mandarin serving as a reminder of the citrus infused into the pigeon jus. 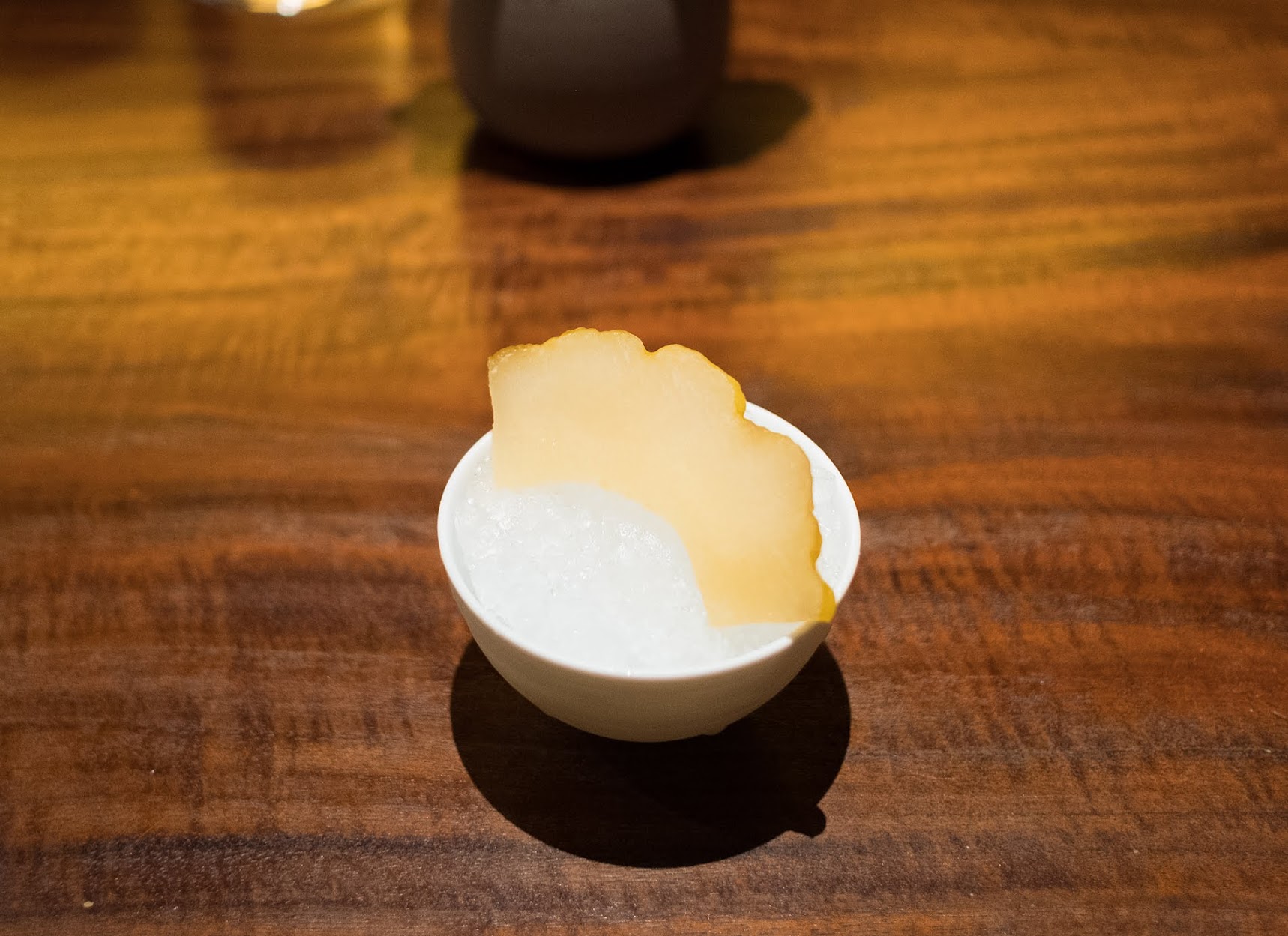 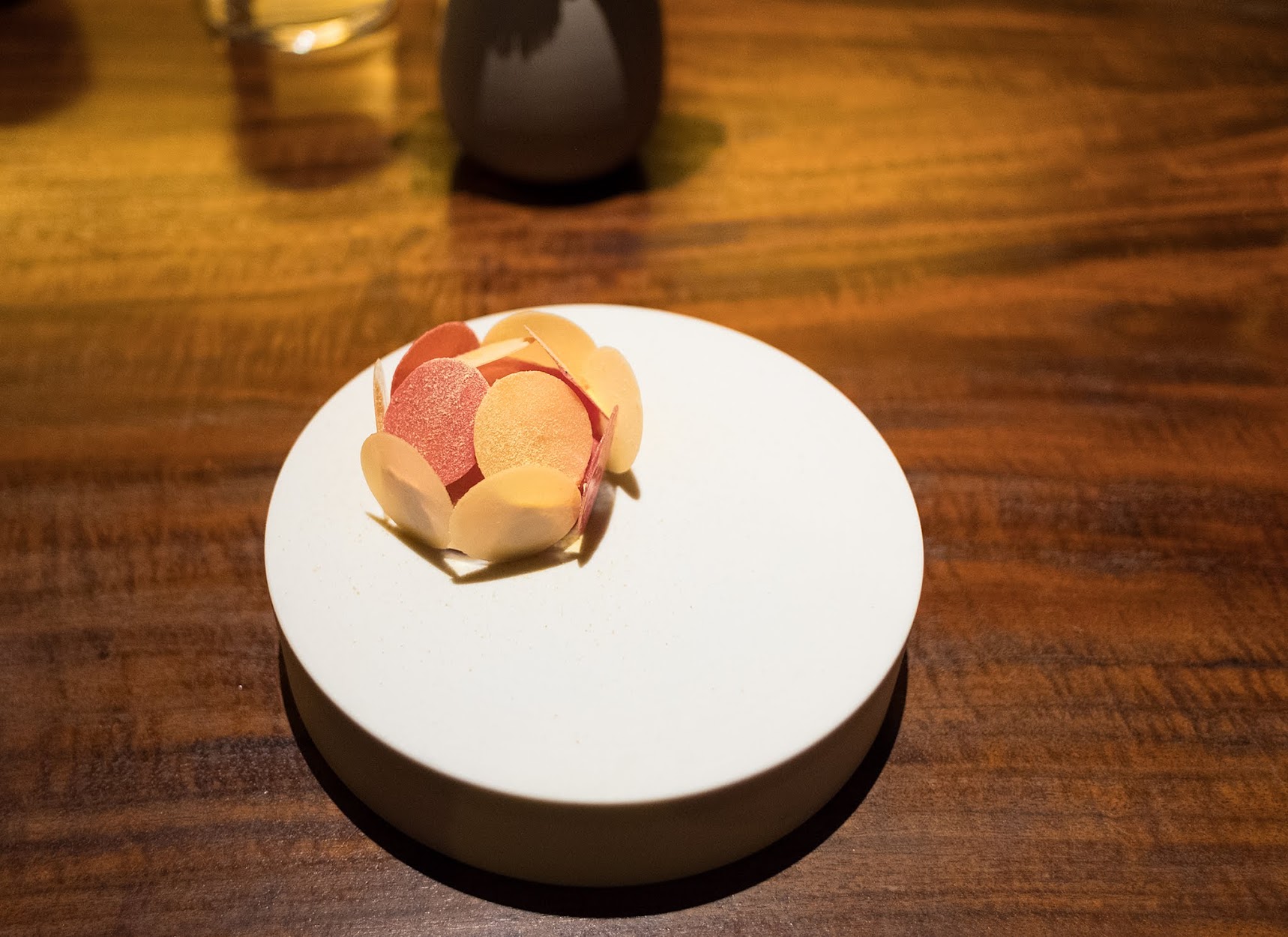 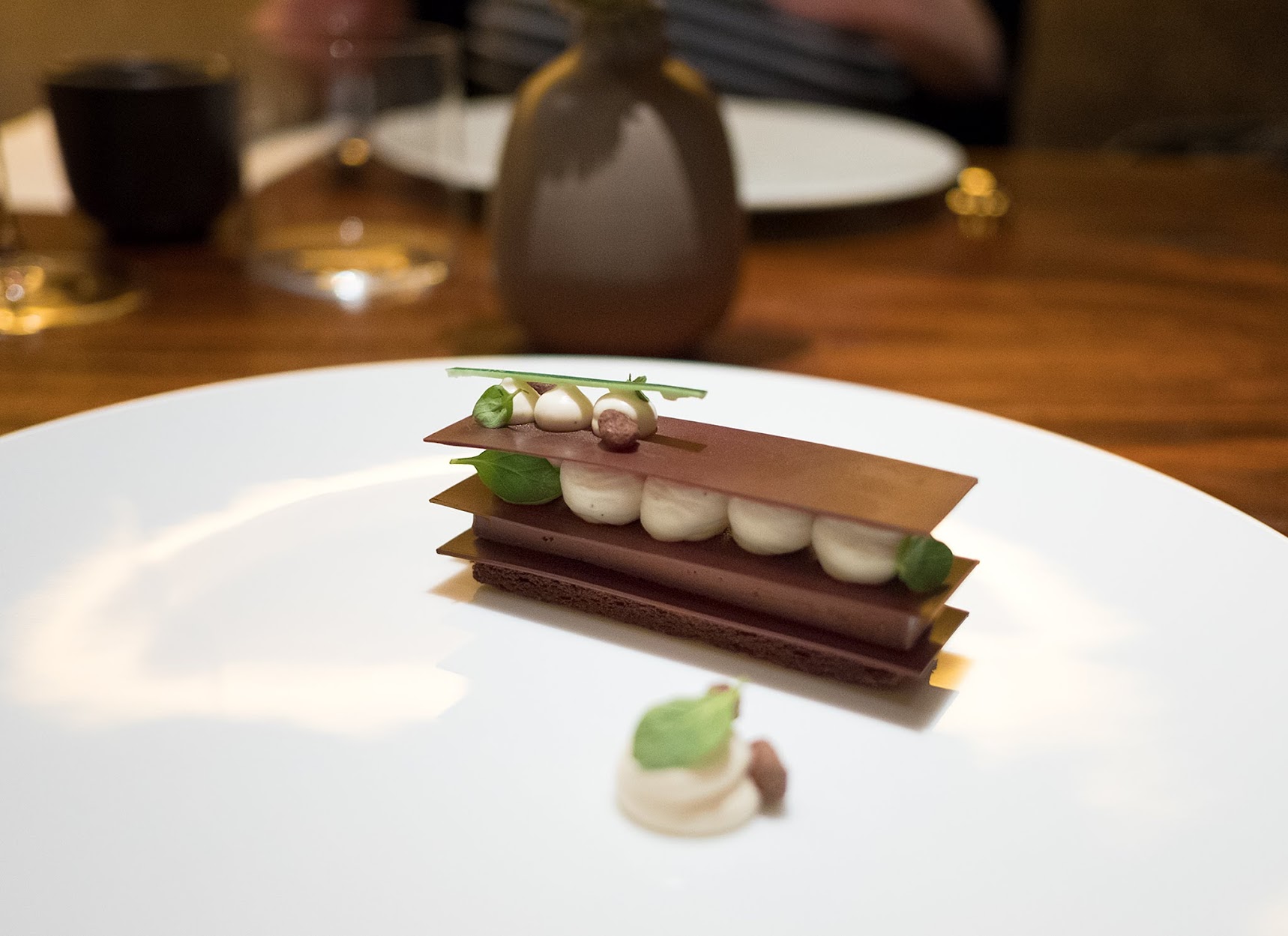 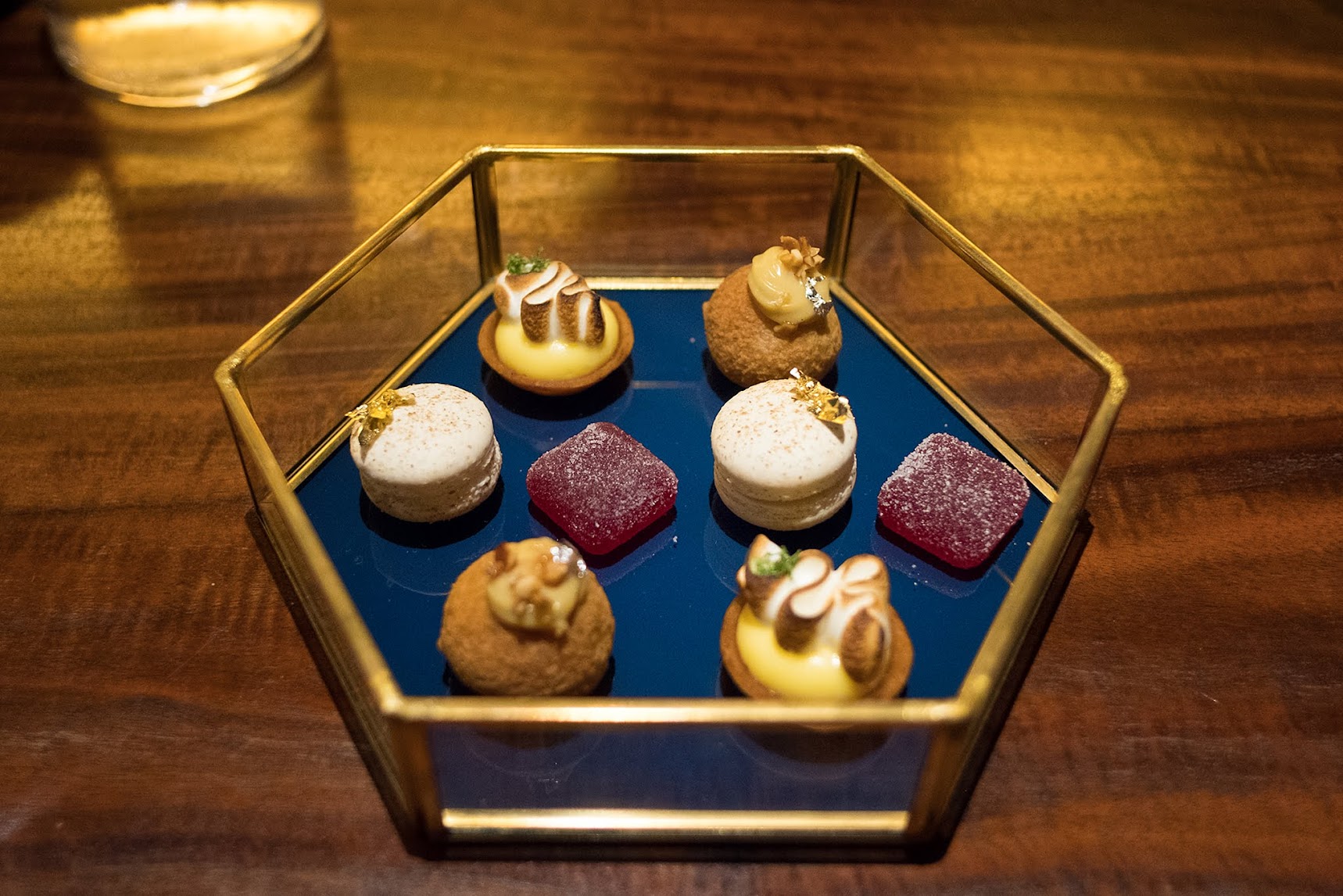 Coi is a restaurant in transition. The first part of the menu would not have been out of place in either Patterson or Kirkley’s kitchen, whereas the sturgeon, tourte and pigeon were clear outliers. I rather enjoyed this change, but I have no idea what direction the menu will move towards. It’s worth noting that the amount of food did leave something to be desired – for the first time in many years of tasting menus, we hit In-N-Out post-dinner for Double-Doubles.