I’m not really one for lists, but when a restaurant receives consistently strong ratings across a number of different guides, it still piques my curiosity – such was the case with De Librije. The restaurant is located in the city of Zwolle, a scant hour by train from Amsterdam. Interestingly, it’s situated in a former monastery and women’s prison, with the main dining room occupying what appears to be the former courtyard (very charming, with the glass-topped roof giving a sense of airiness). We opted for the longest menu – ostensibly 7 courses, but with many accoutrements. 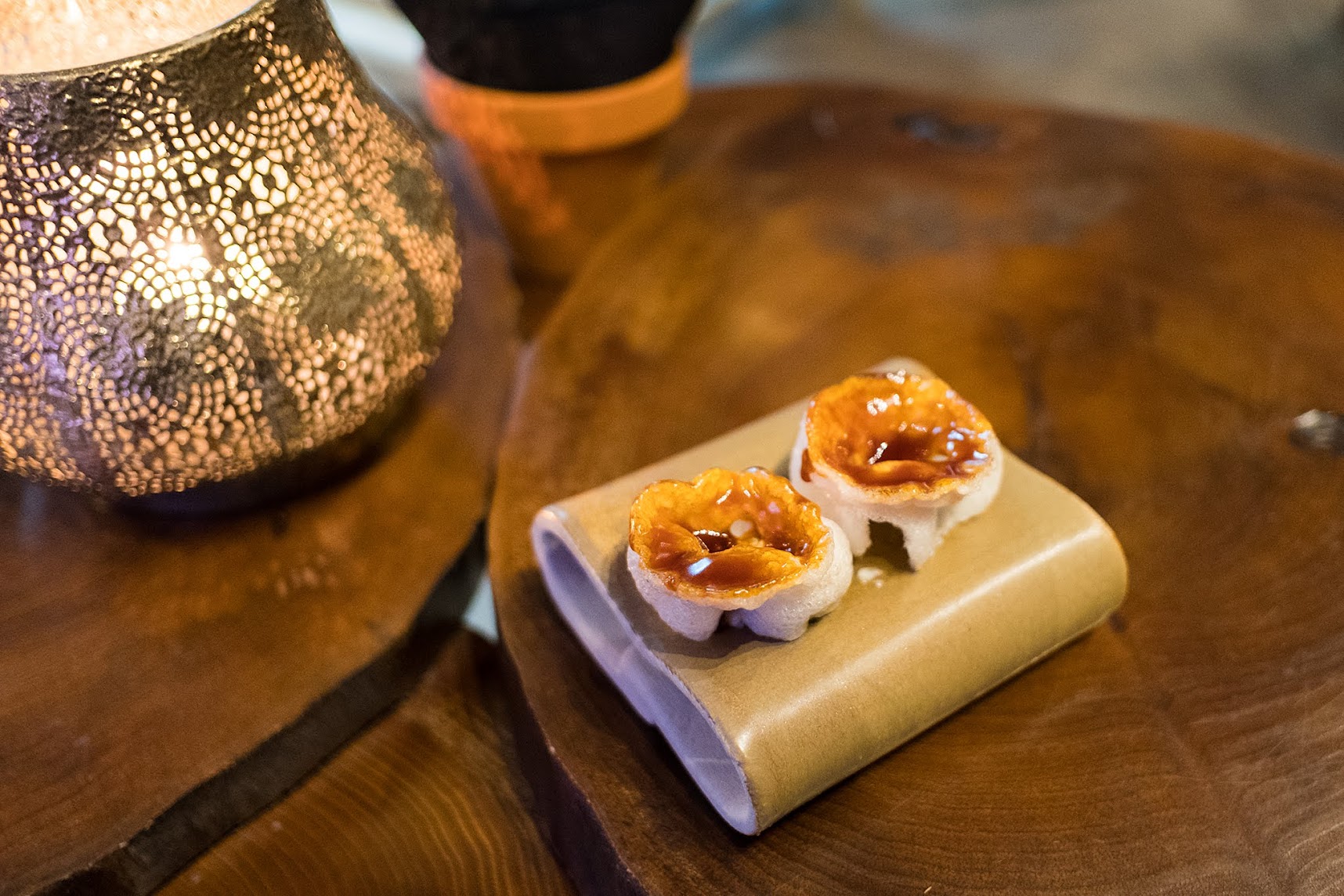 Glazed wooly pig meat
The first few snacks were served in the lounge area, while we enjoyed aperitifs and perused the menu. The opener was a rice crisp filled with glazed, shredded pork – assertive and tasty. 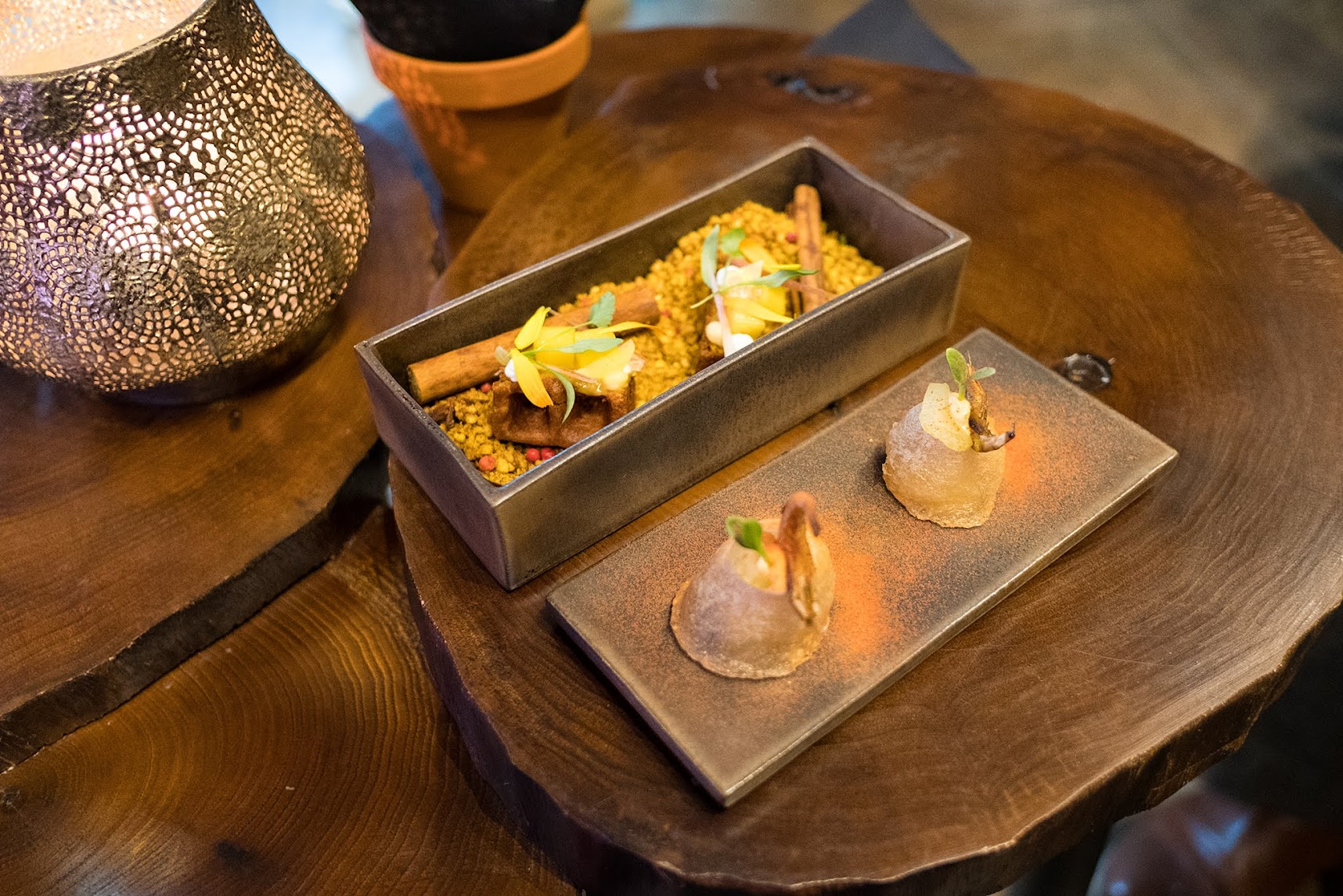 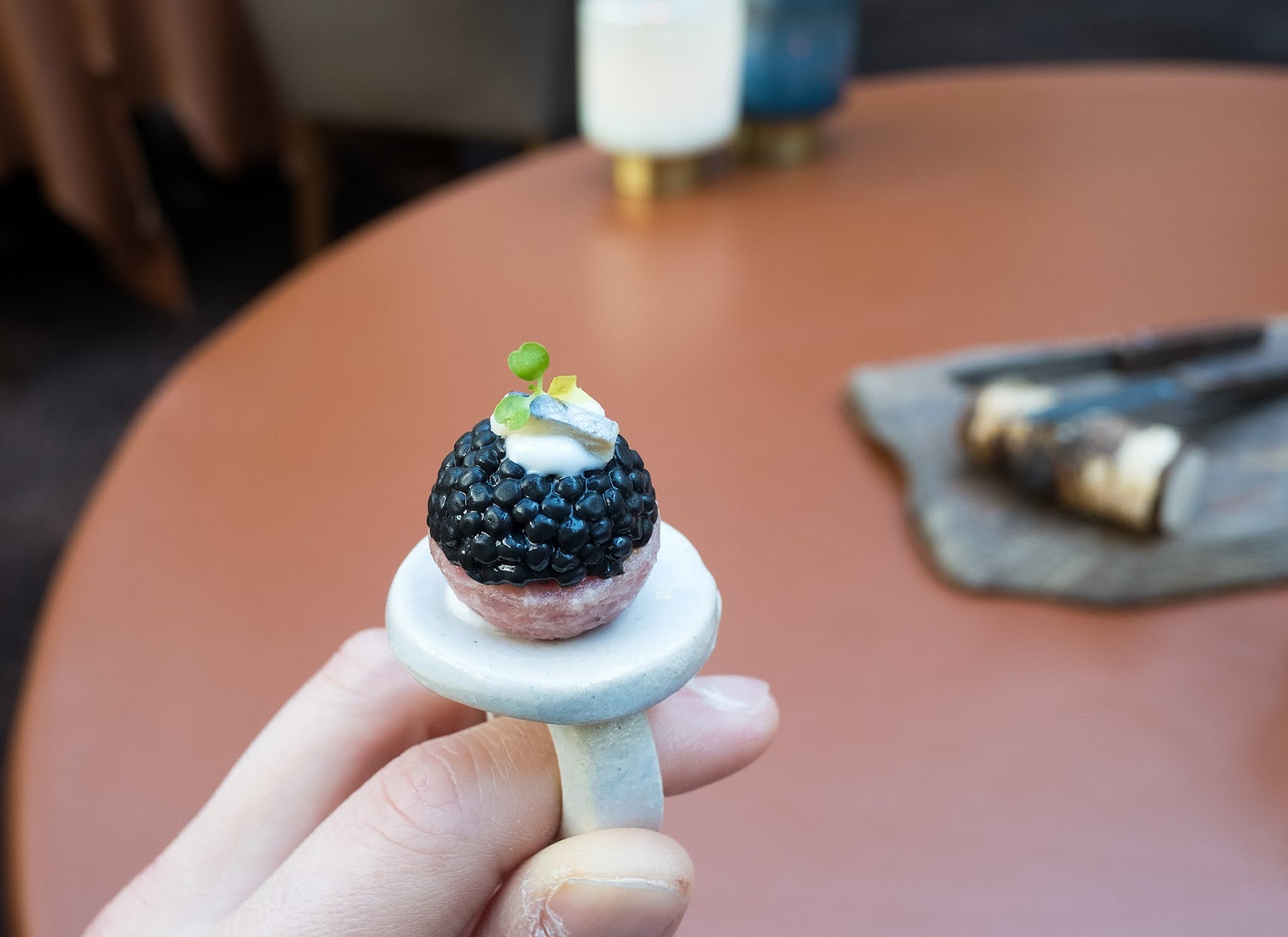 “Friendship ring”
Veal, herring, watercress
Moving into the dining room, we were presented with a ring holding a sphere of veal tartare and herring roe. It was topped with a herring cream, pickled herring, watercress and pickle. How do I know so much about the components? Because we were also given an accompanying booklet containing the recipe for the “Friendship ring” – curious. 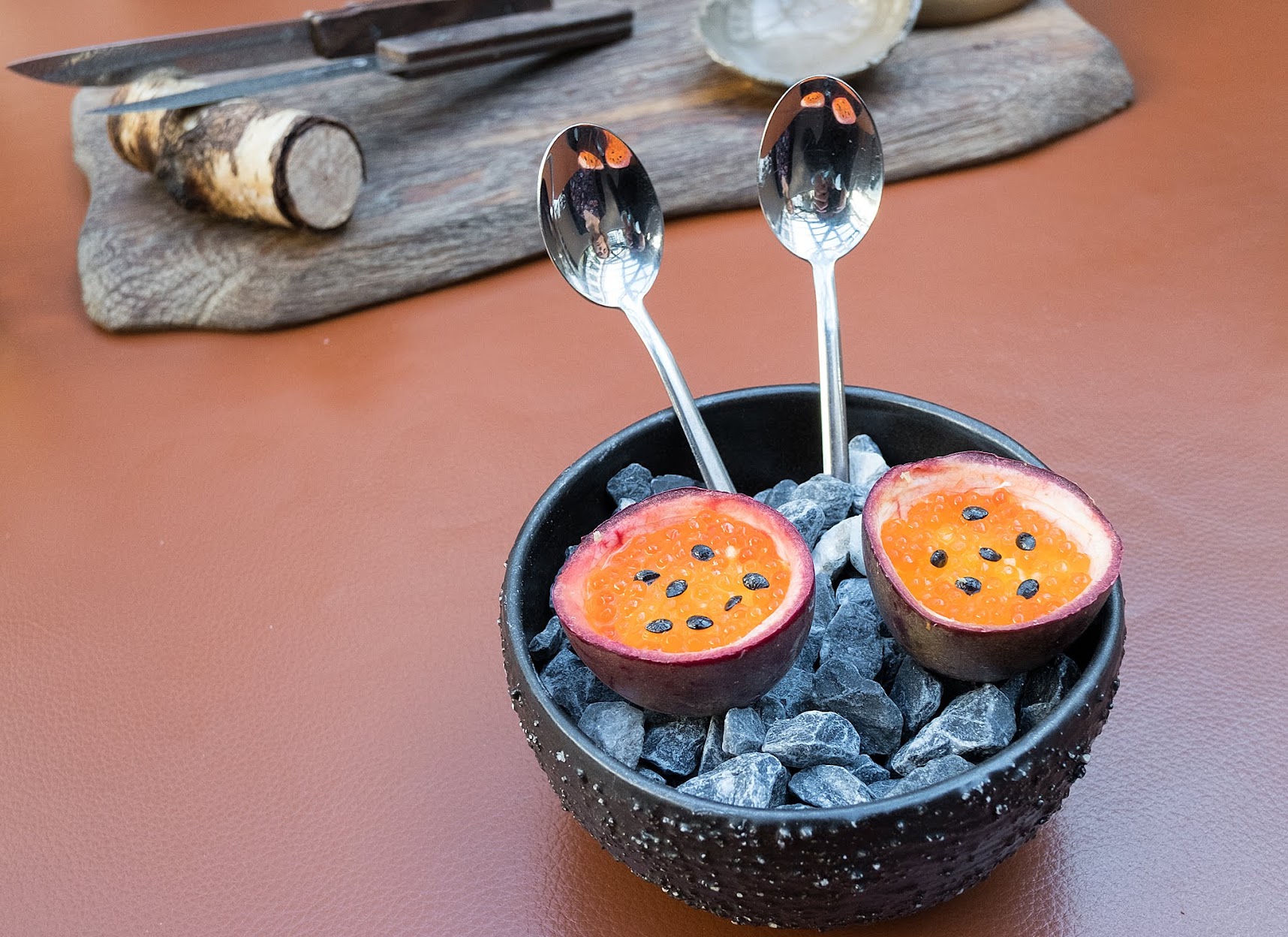 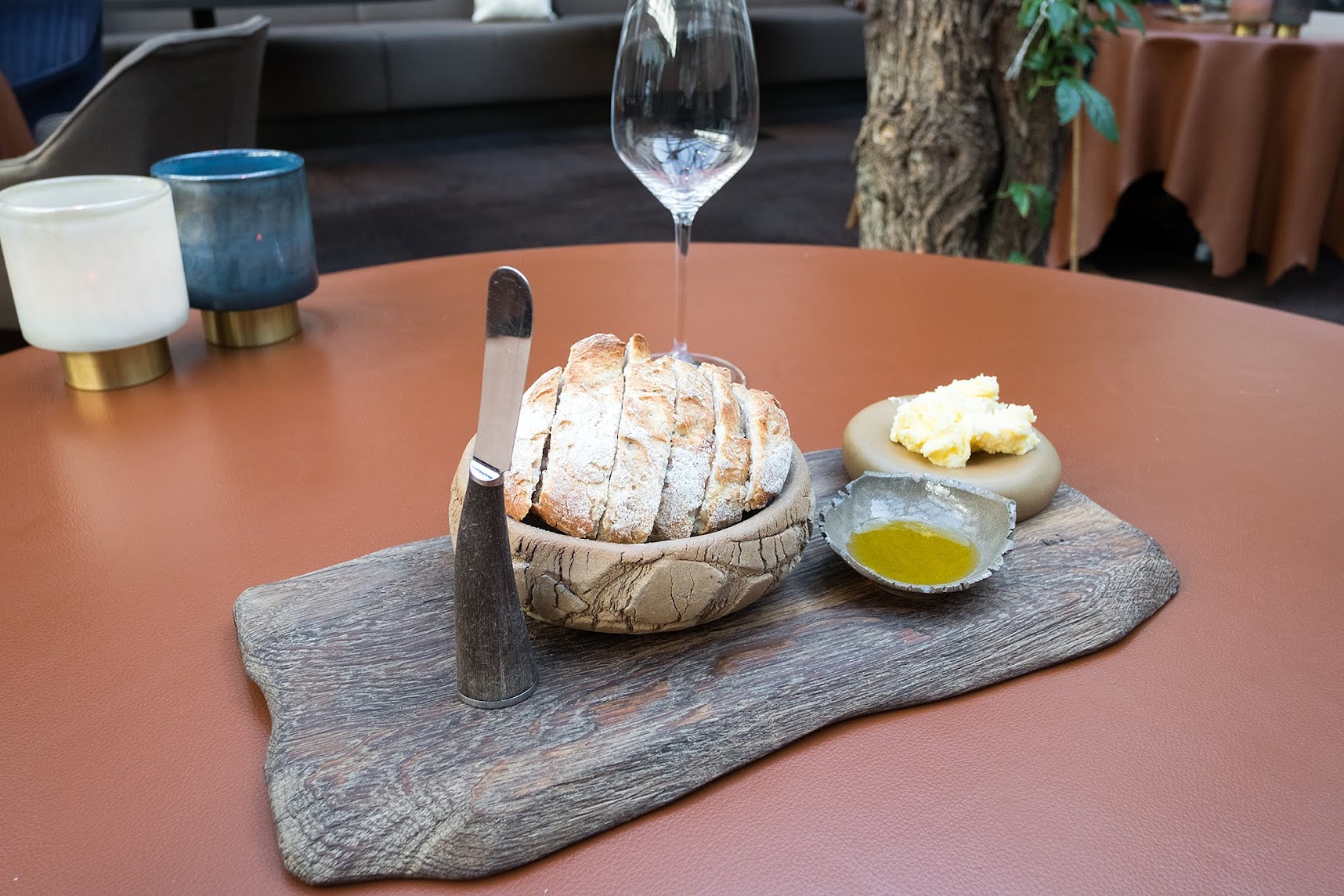 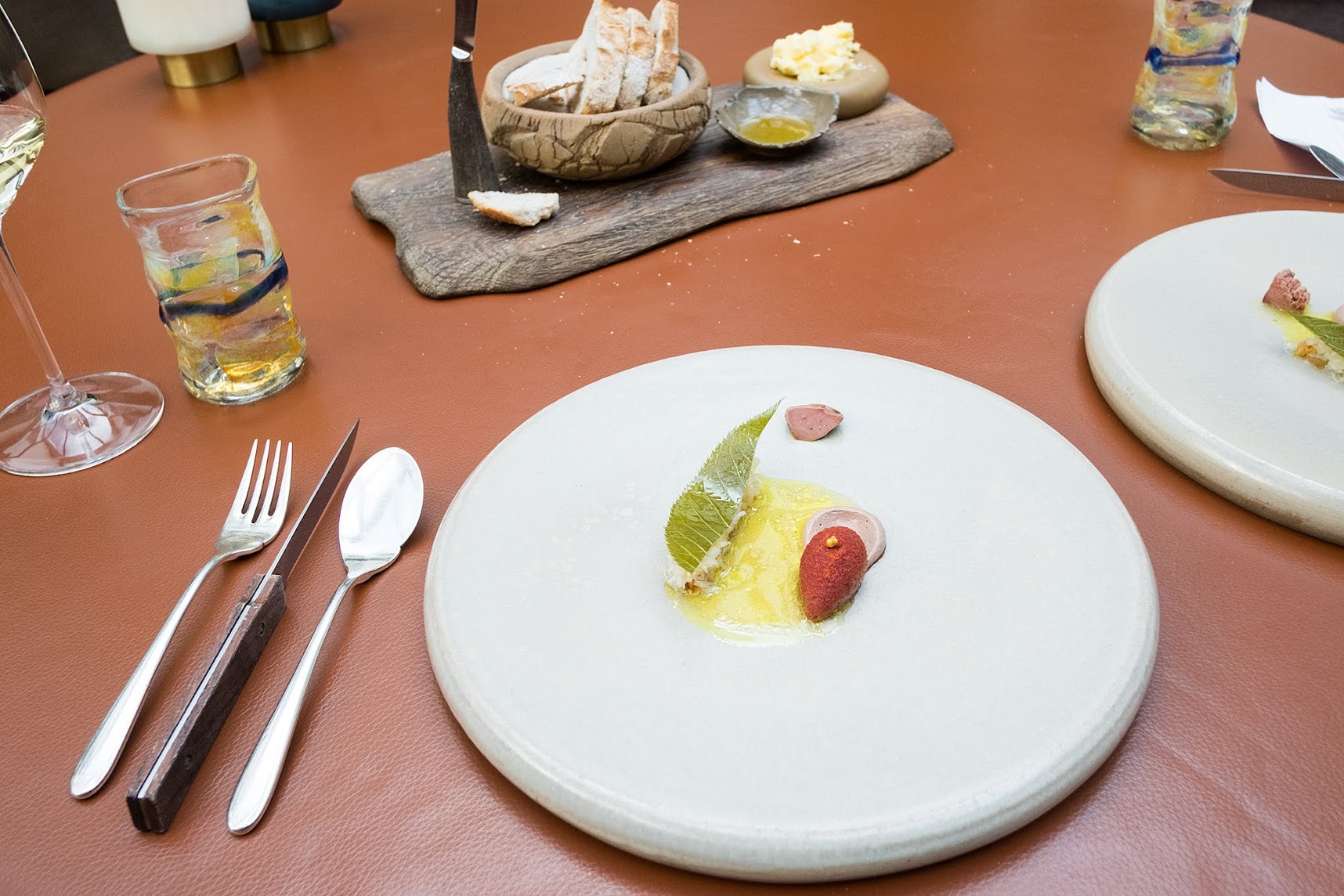 North Sea crab
Pickled cherry leaf, chicken liver, veal heart, celeriac
The first proper plate arrived with a bang. A quenelle of raw veal heart rested on a chicken liver mousse, with half a lobe more of it to the side. The crab lay beneath a thin drape of crisp celeriac and cherry leaf. Quite an eclectic combination of flavours, and yet they worked so well together – a theme that resonated throughout the meal. 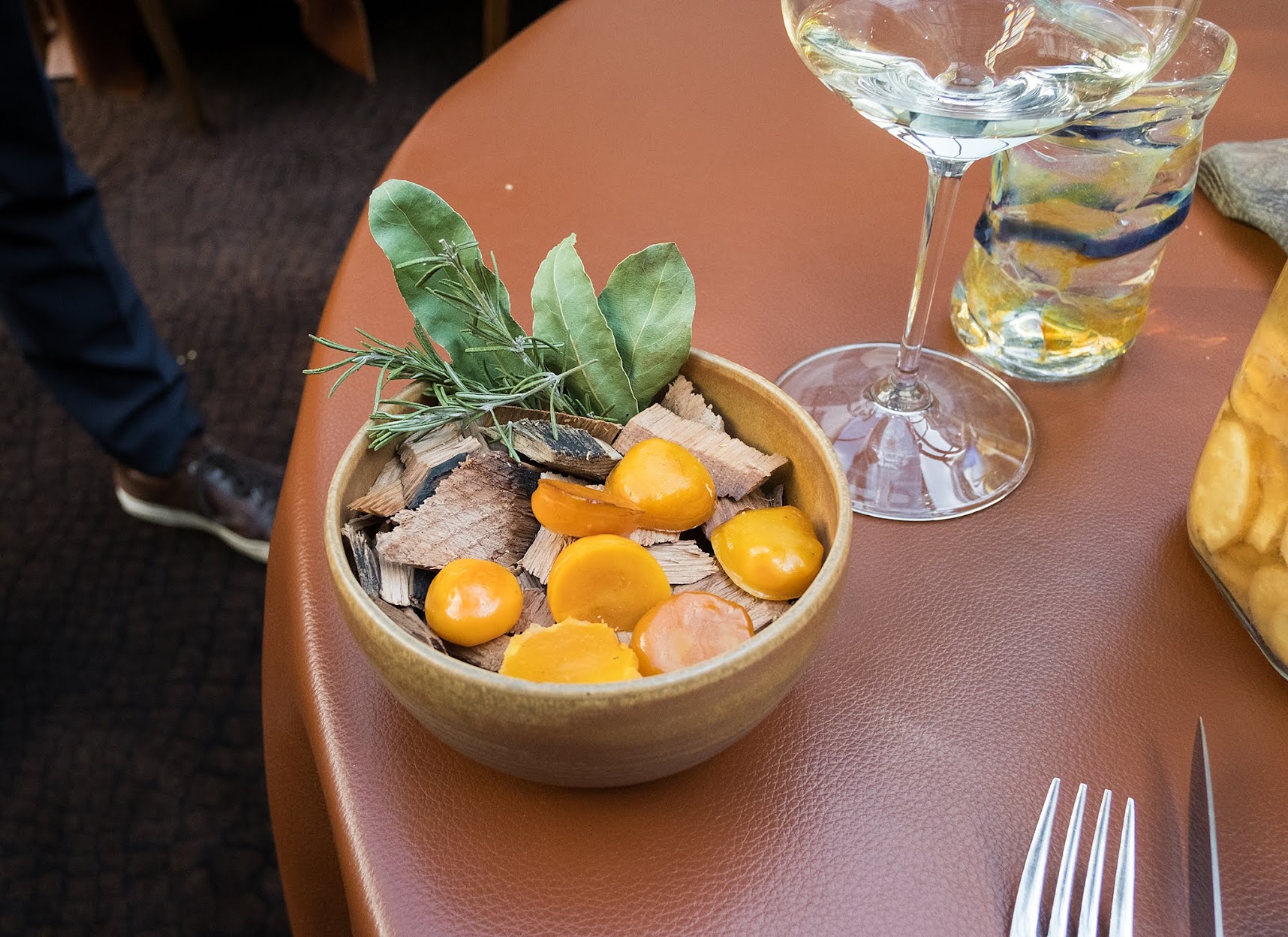 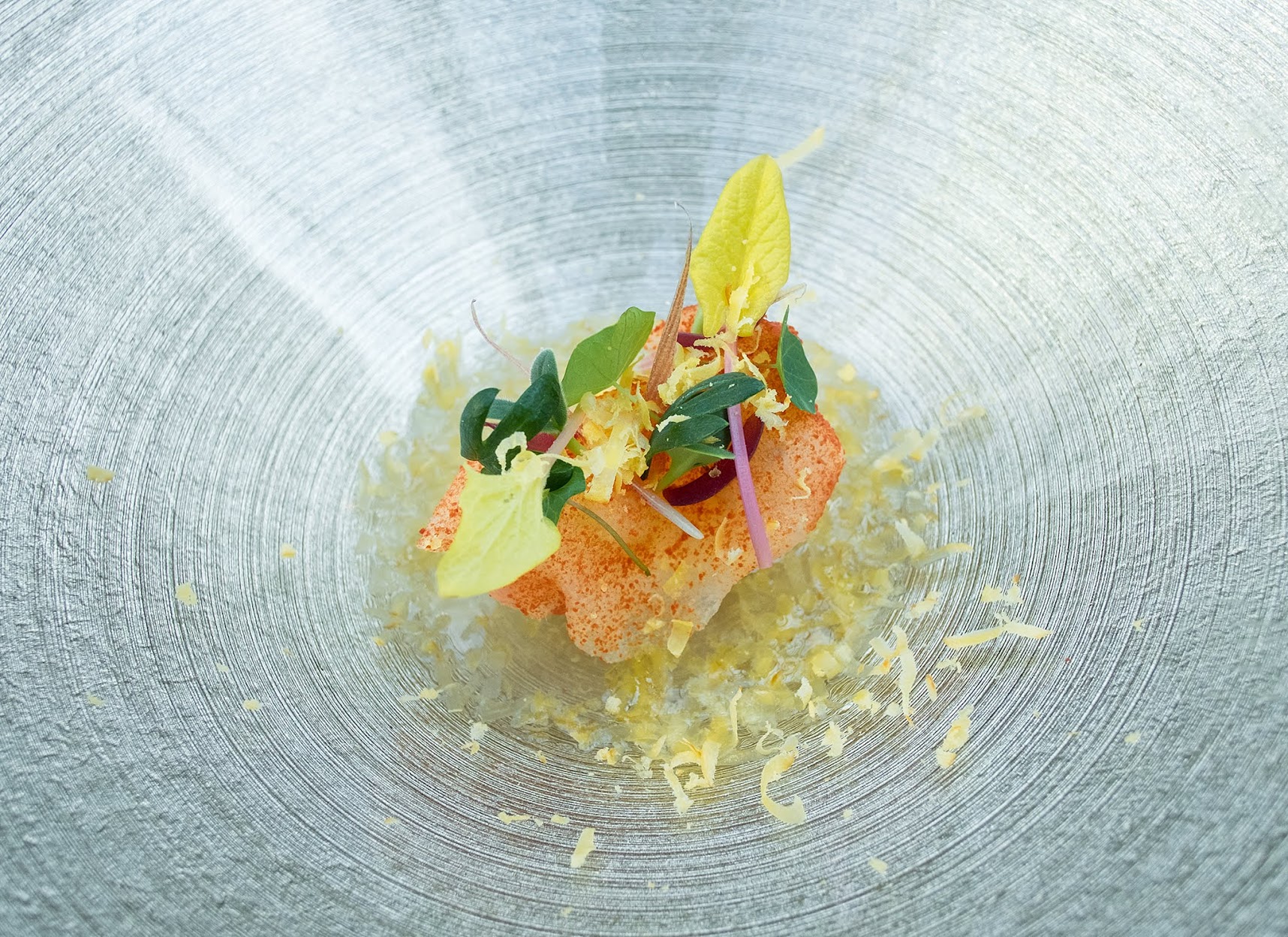 Langoustine
Lime leaf, cured egg yolk, pear, mushroom kombucha
One of their “classics”, from 2014, which we requested to be included in our menu. This was a bright, refreshing, dish that I could find little fault with. 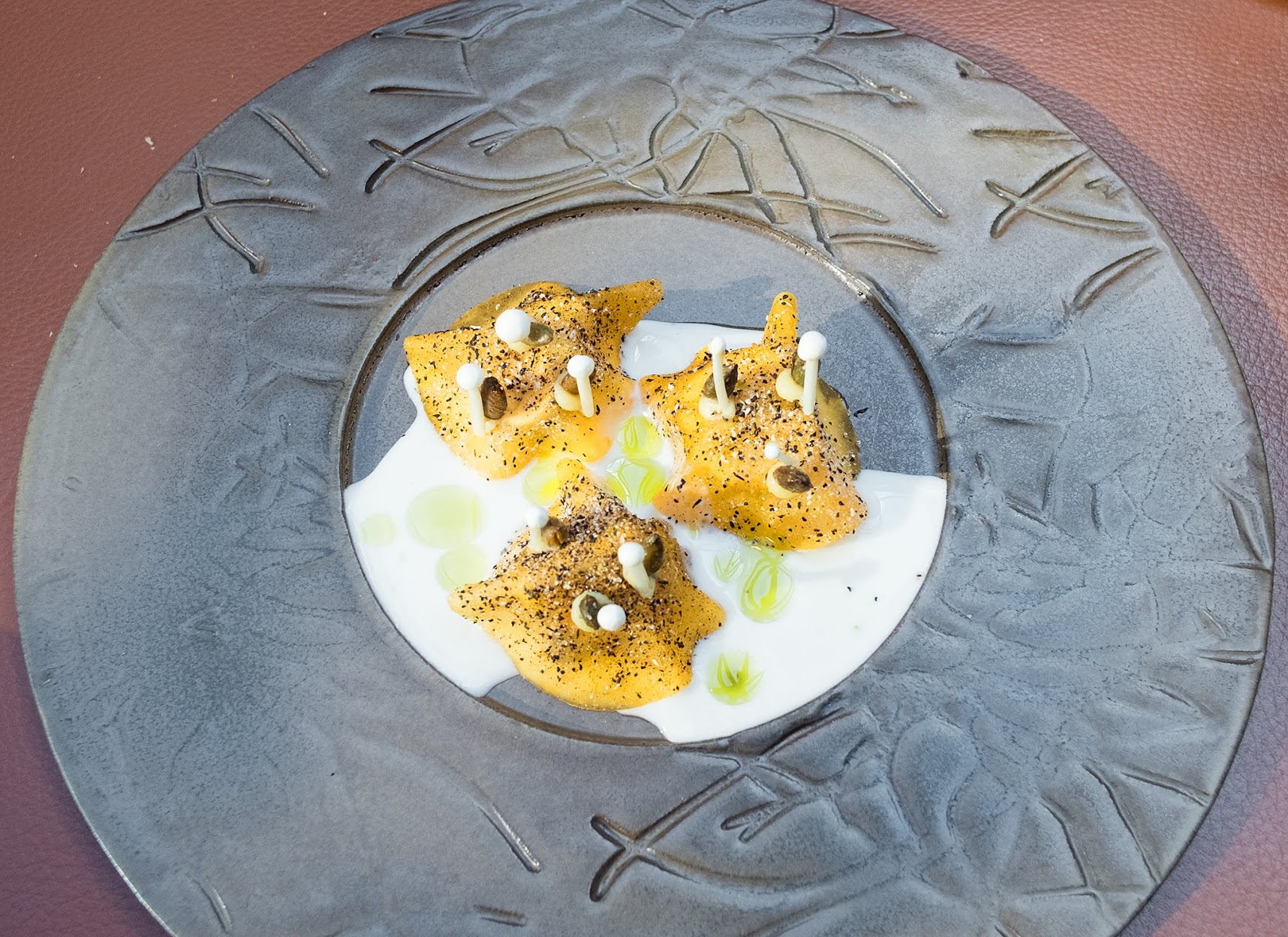 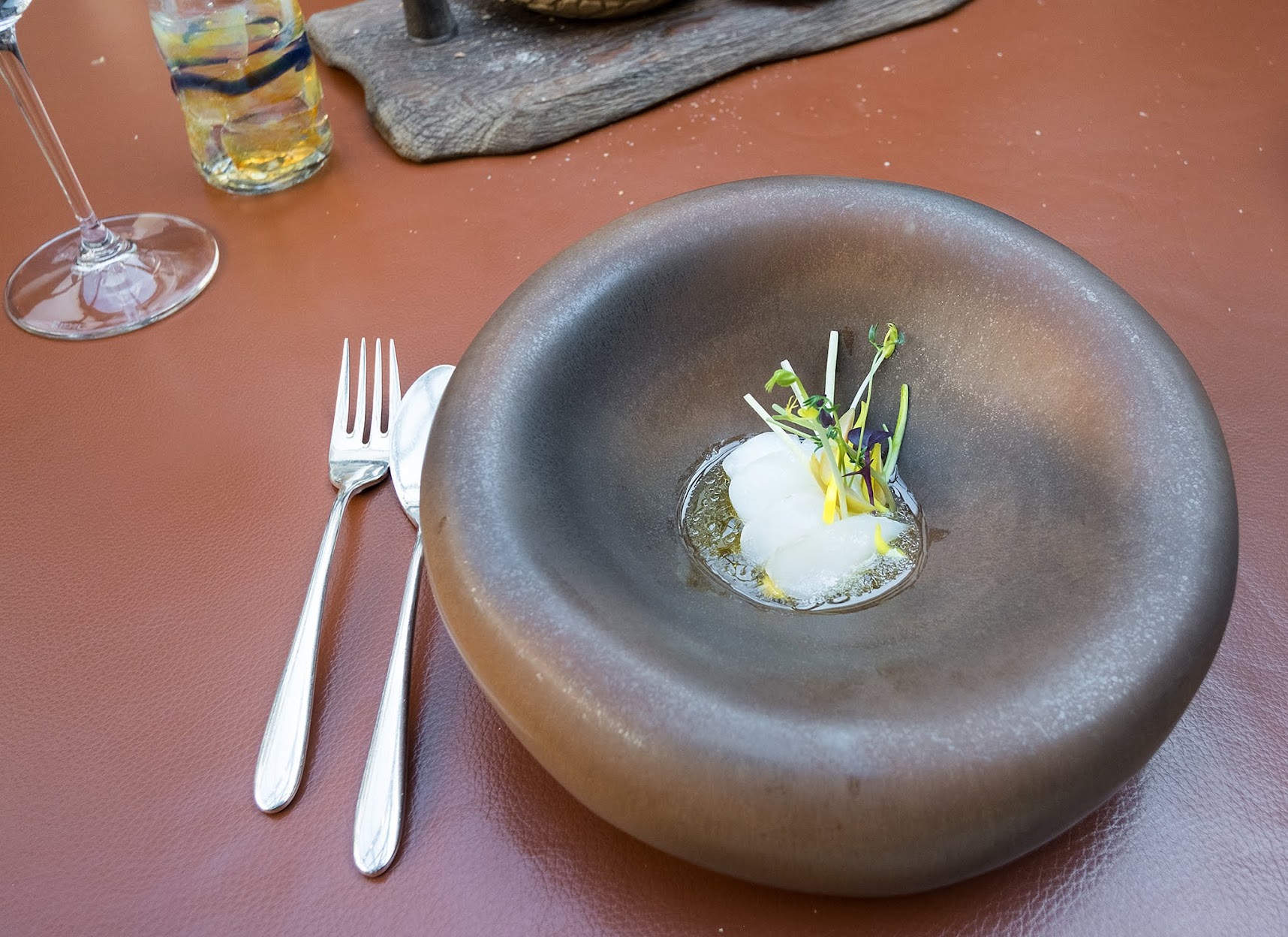 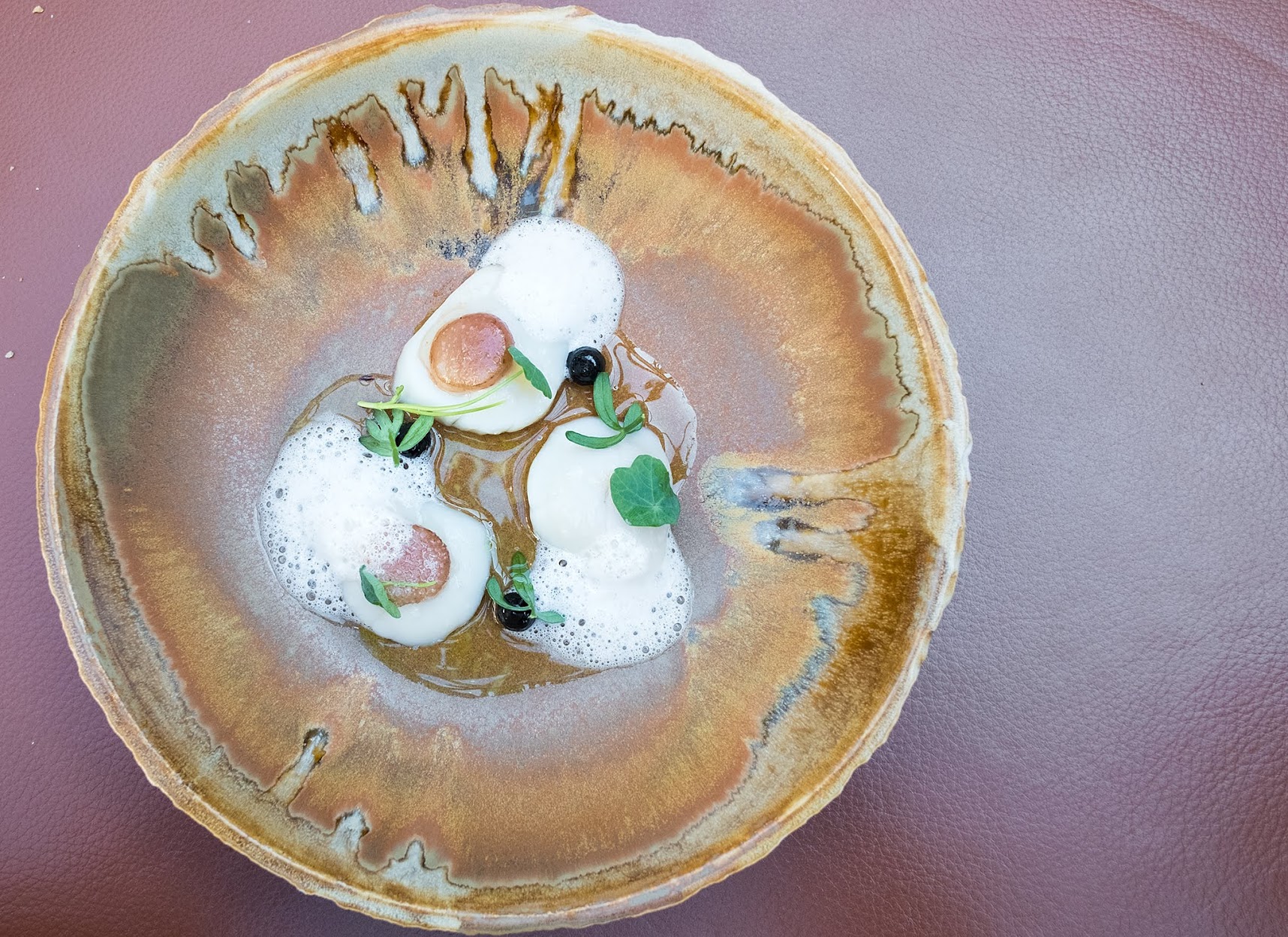 Scallops
BBQ celeriac, black garlic, veal marrow
A second “classic”, this one dating all the way back to 2004 – the year they earned their third Michelin star. I can see why this might have contributed – the scallop was excellent, and the earthier components were used sparingly so as not to overpower it. The marrow was deftly used to add a pleasant, fatty mouthfeel – superb. 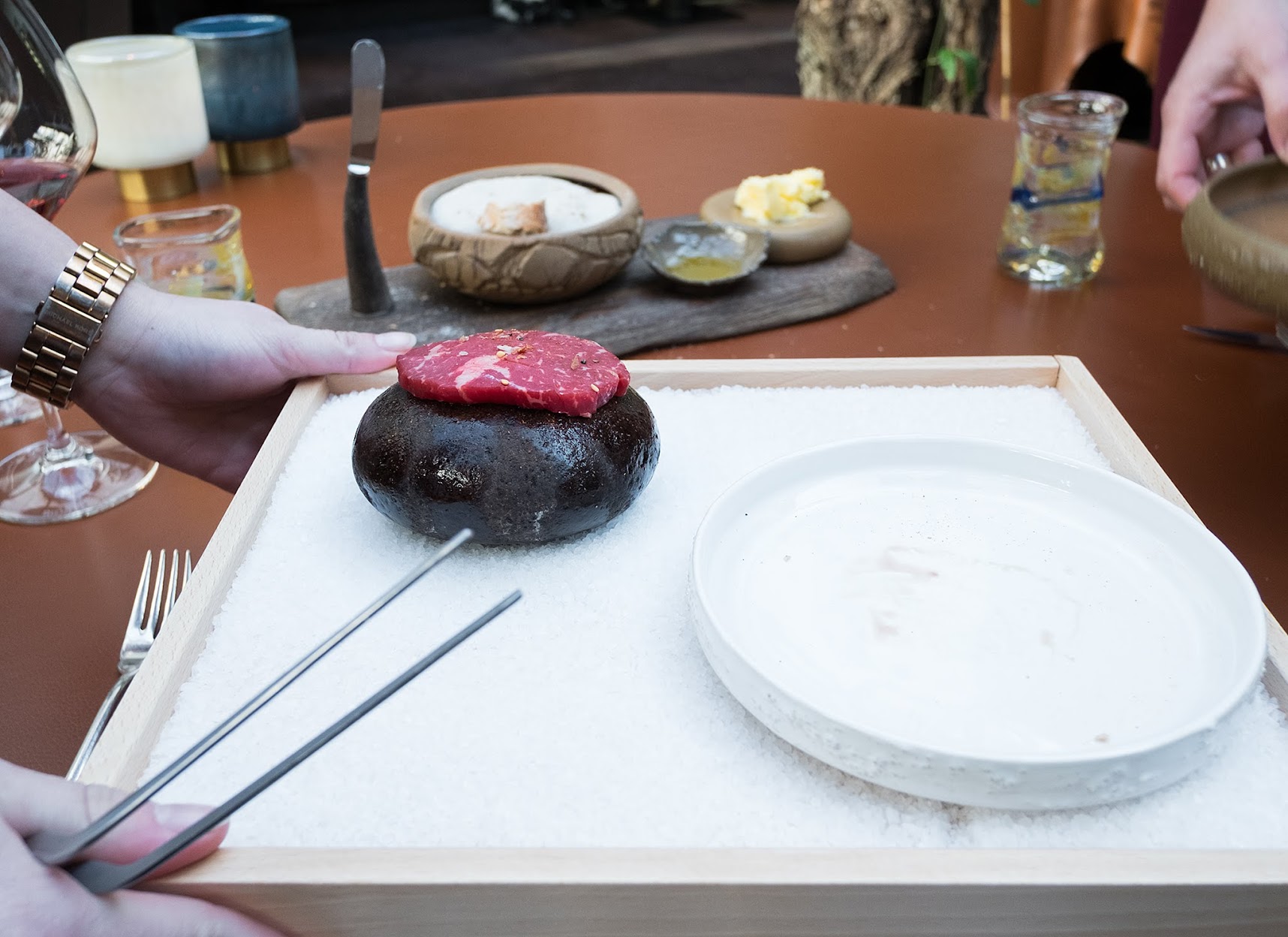 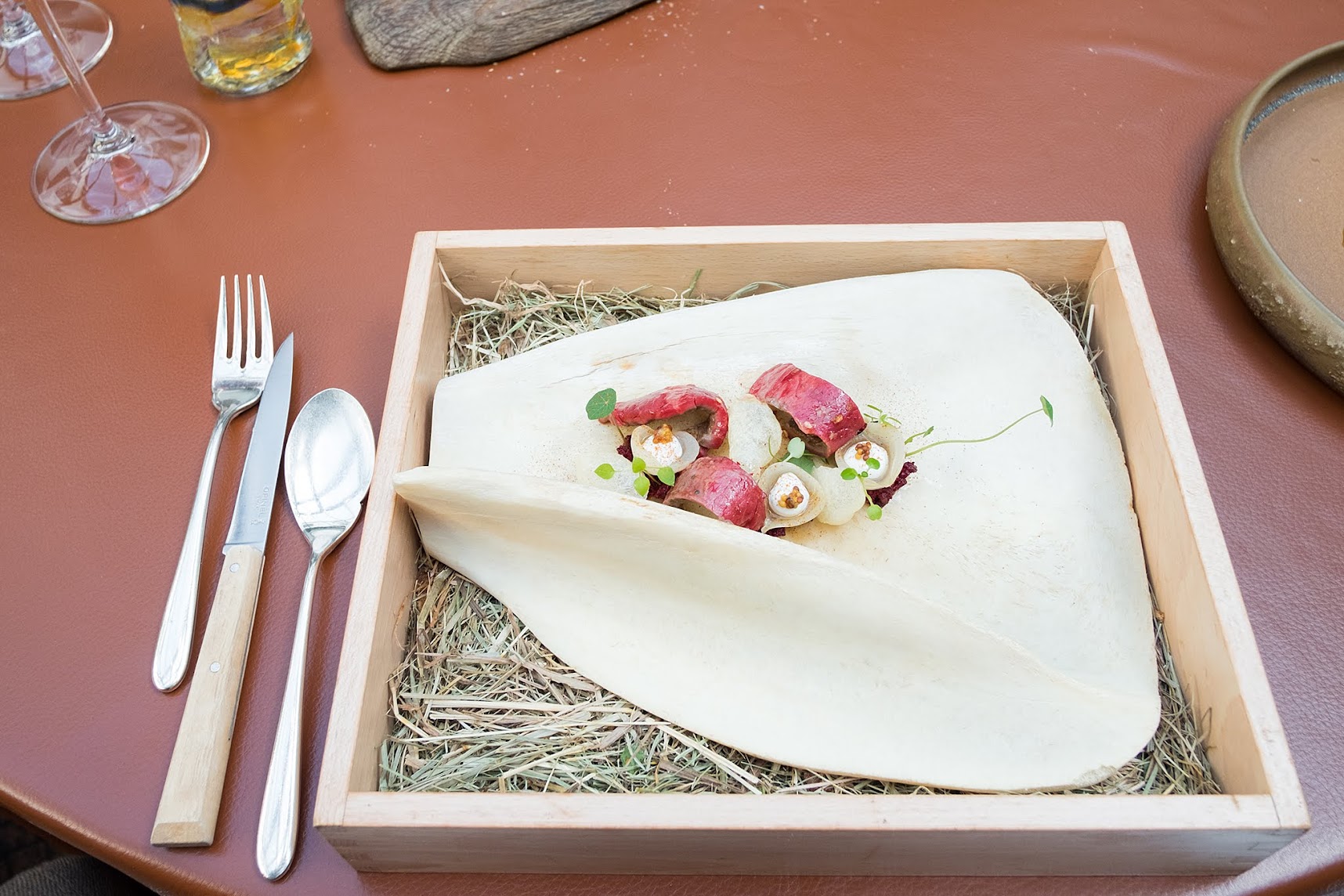 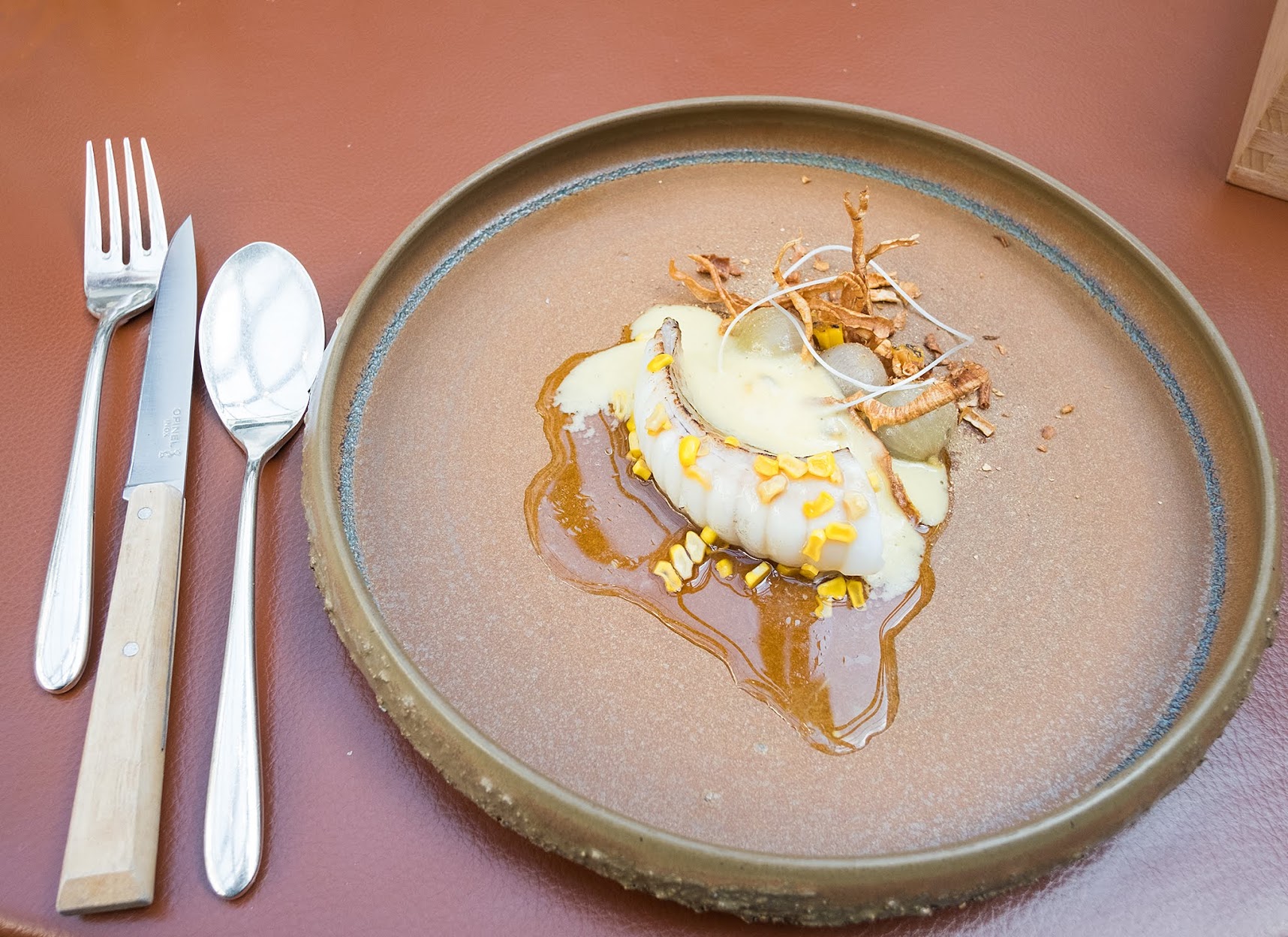 Monkfish, fermented corn, veal tongue
I think this might be the best monkfish I’ve ever been served – the cooking on it was perfect, and the pairings were unusual yet worked cohesively together. A true example of the whole being better than the sum of its parts. 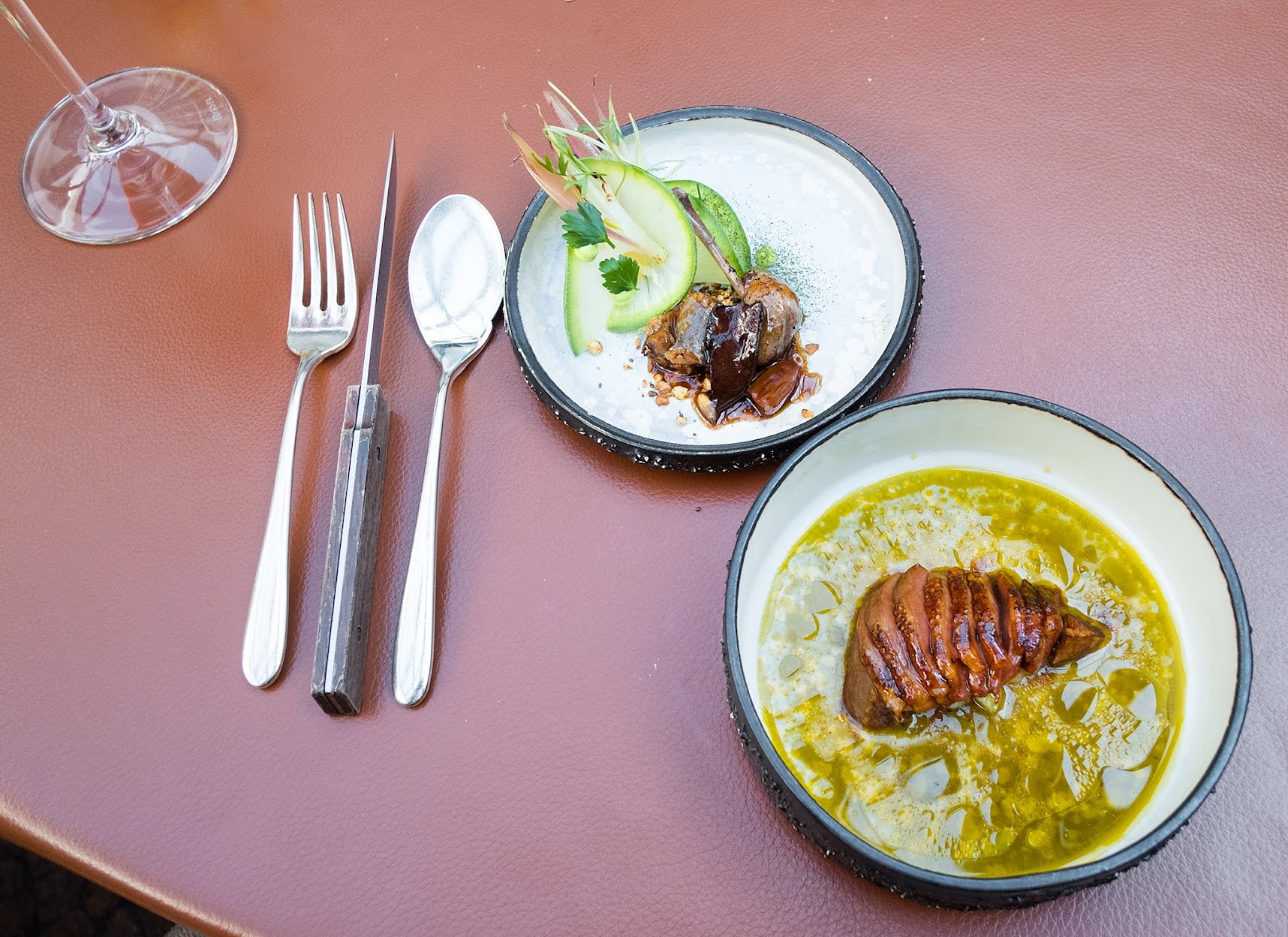 Farmer’s pigeon
Green radish, young ginger, celery
Many parts of the bird were served – breast, wing, leg, heart and liver. They all had a distinct tang of iron that was alluring, and the cooking was once again unimpeachable. 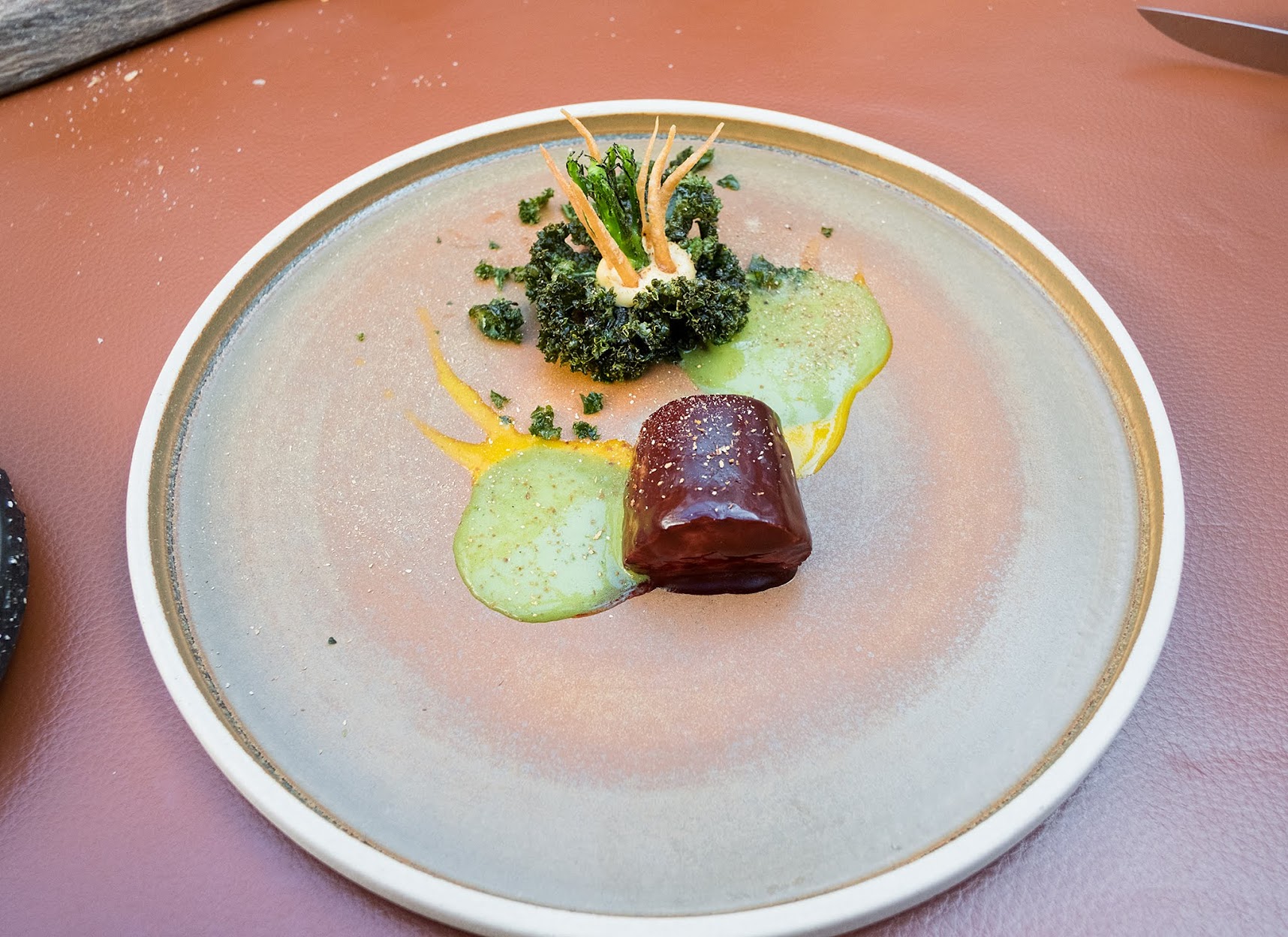 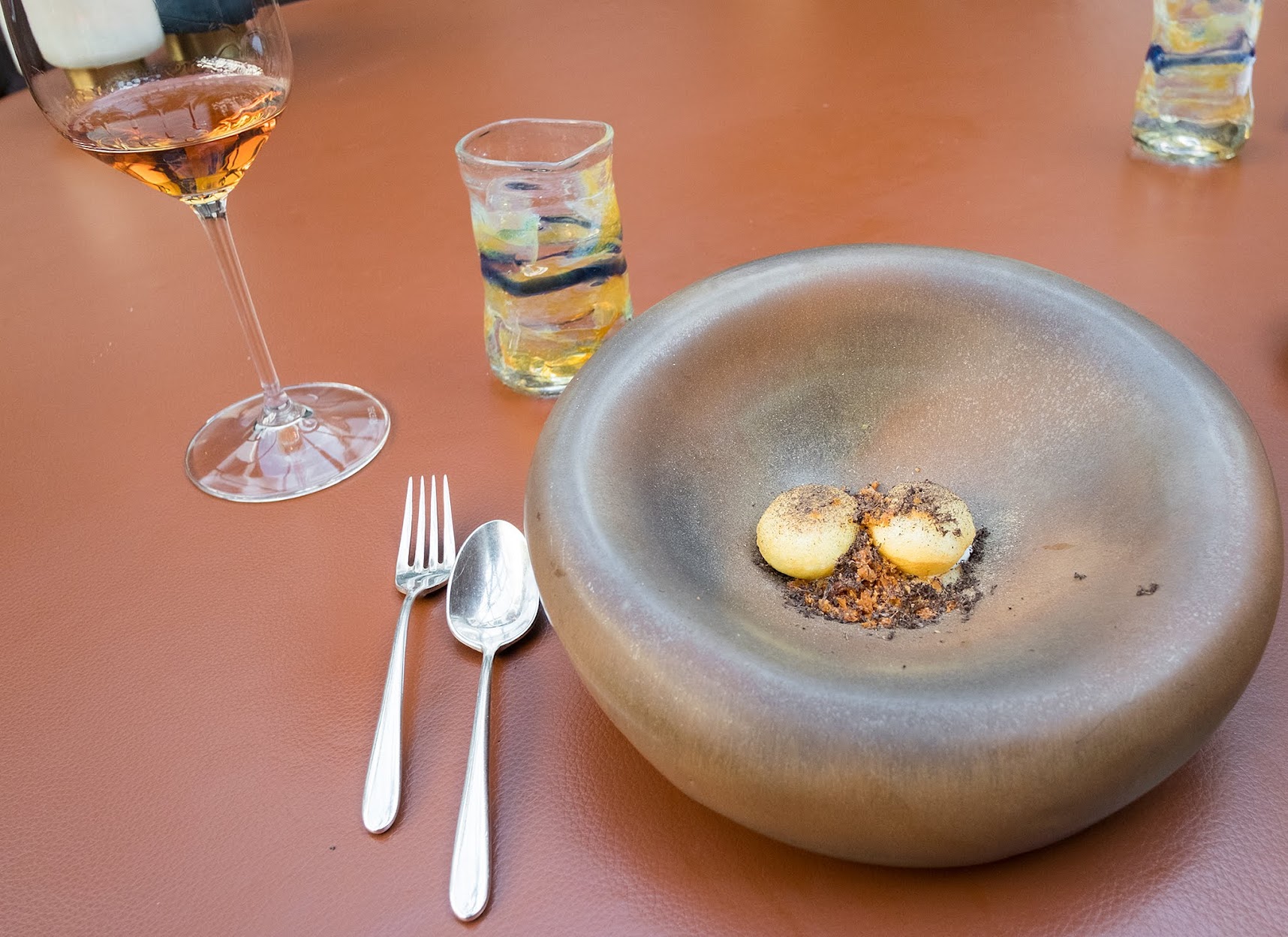 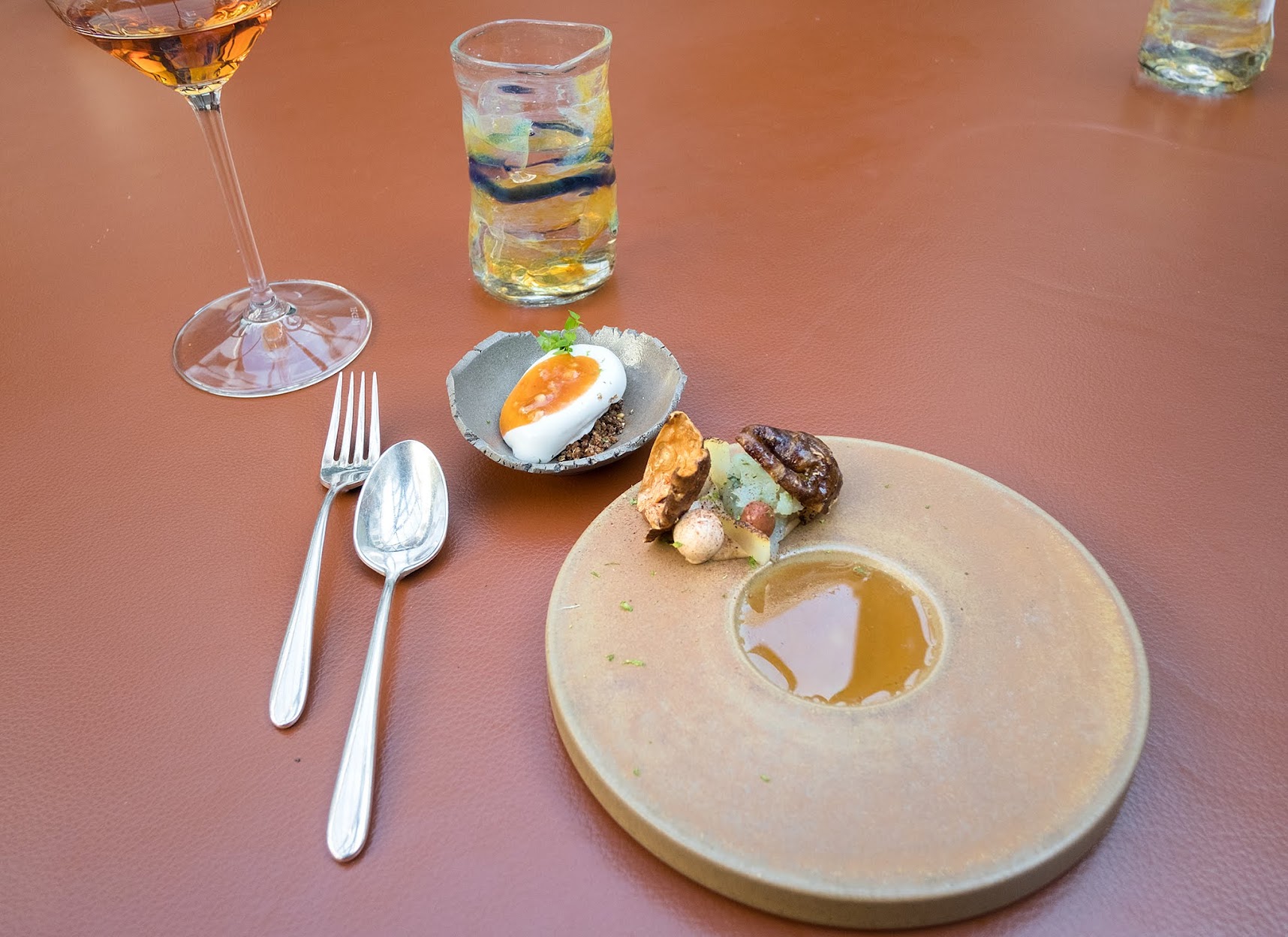 Sunchoke
Brown butter ice cream, hazelnut, green apple
The sunchokes were served roasted and crispy, and a tea of sunchokes was also made. Their earthiness, together with that of the (very smooth) brown butter ice cream and crushed hazelnuts, was magically balanced by green apple in a few forms. A very good bridge between savoury and sweet courses. 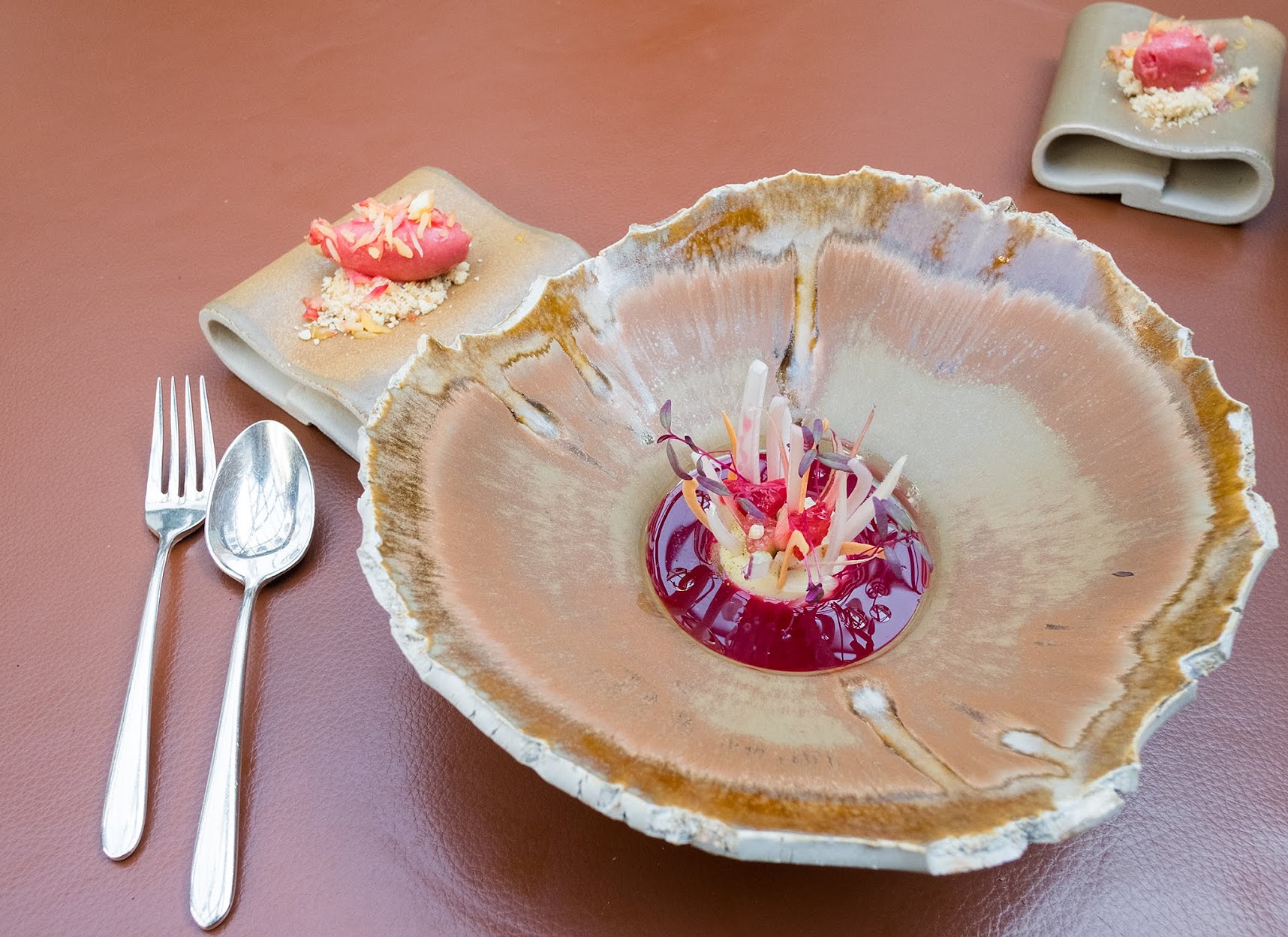 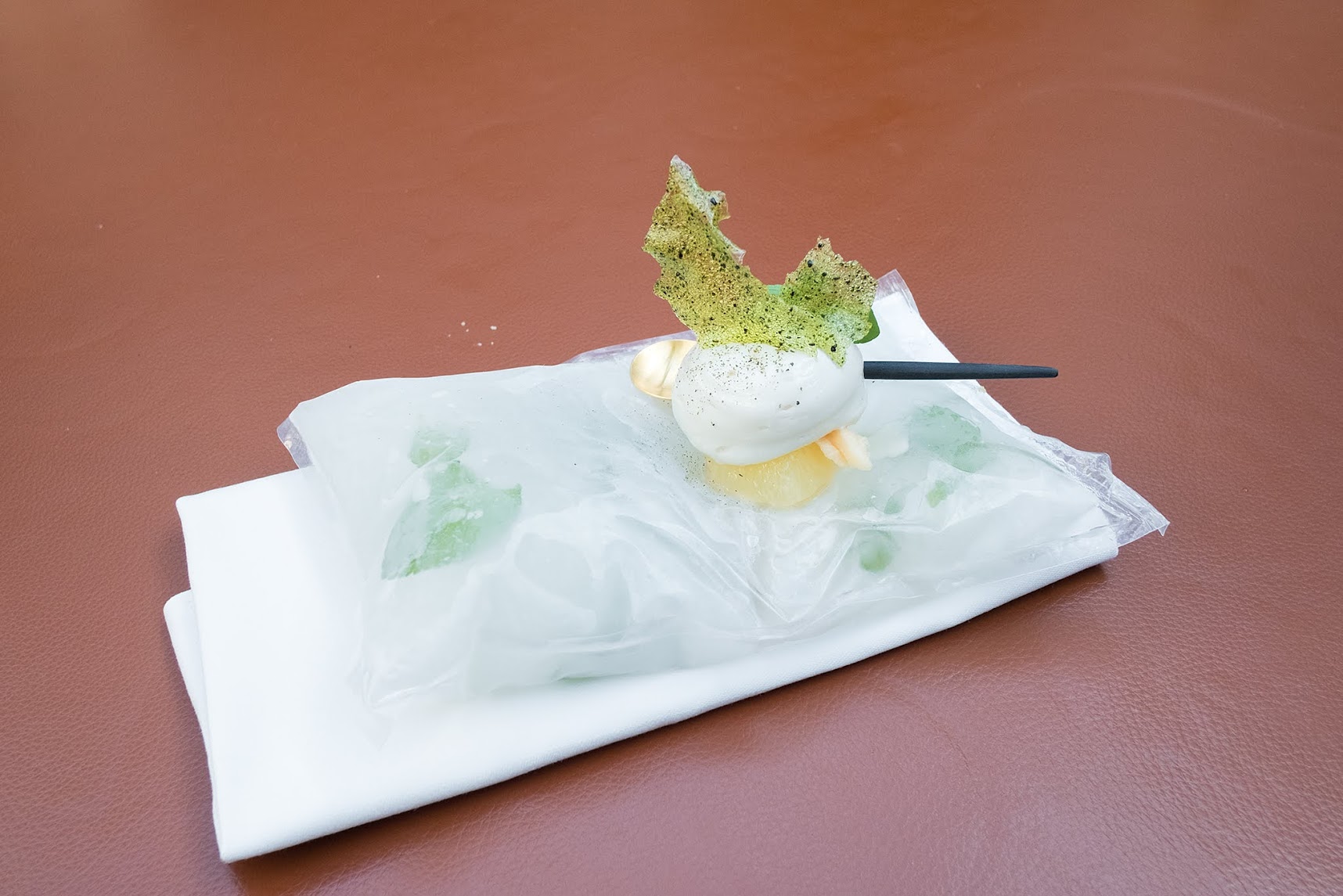 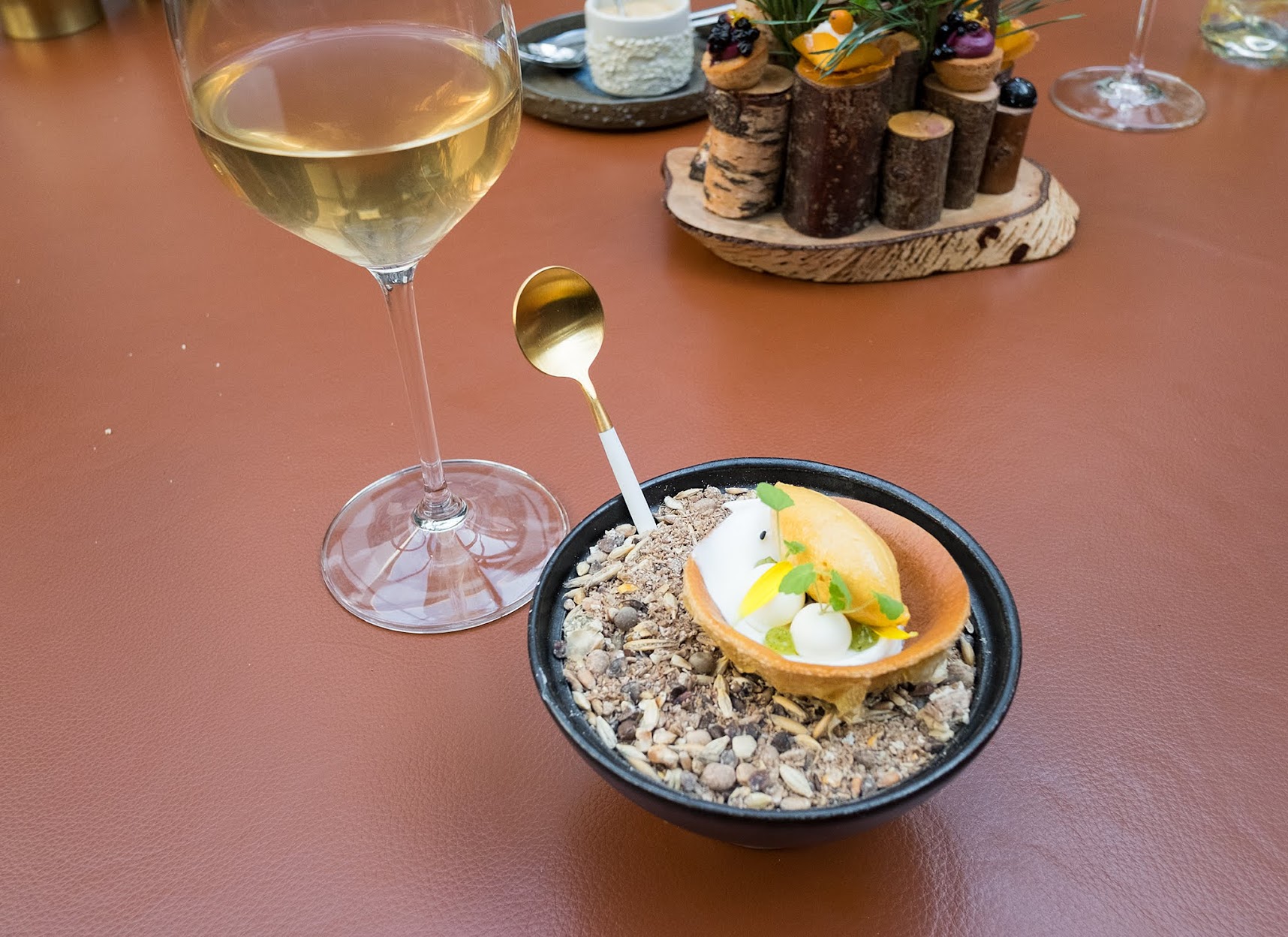 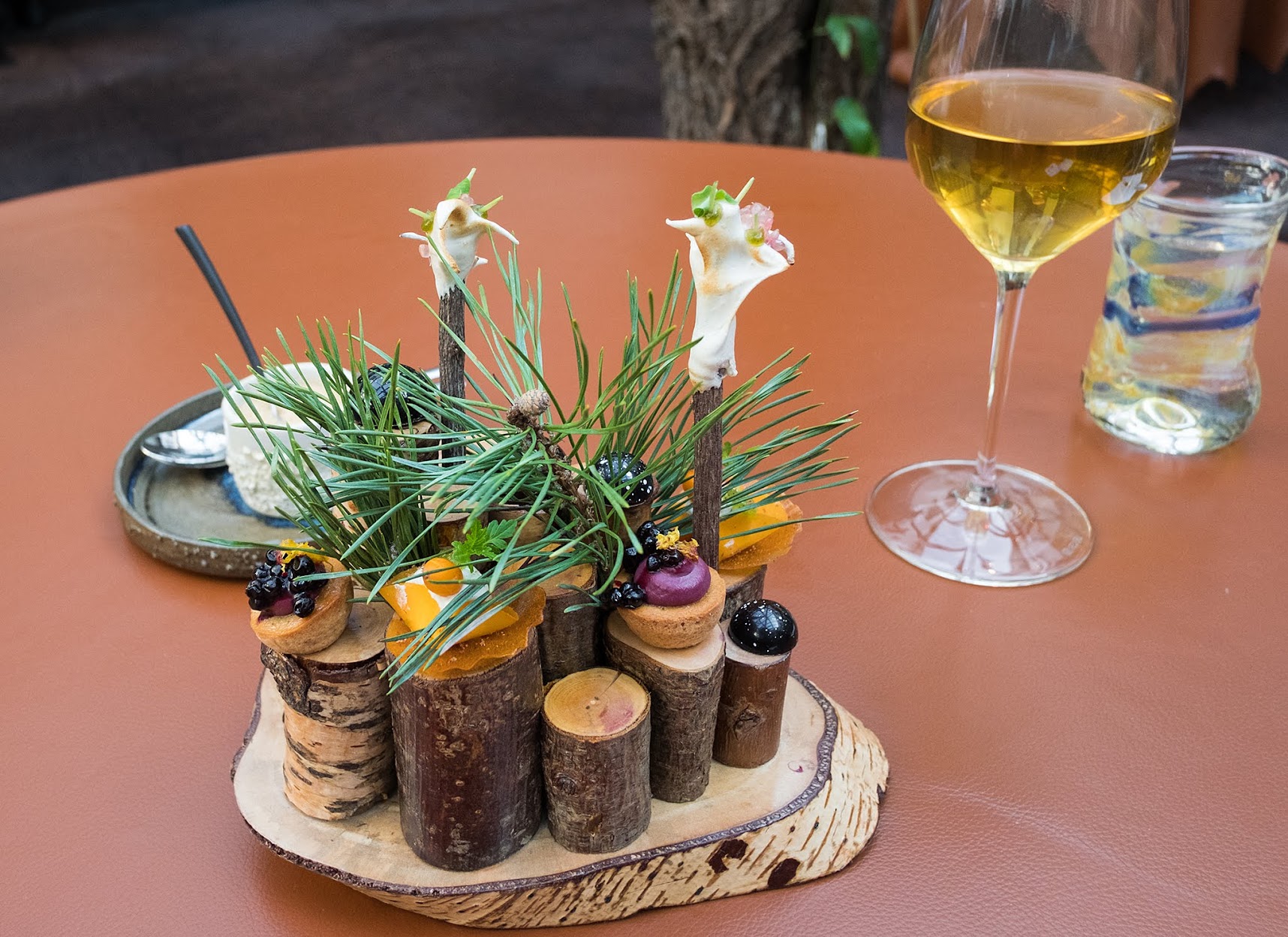 “Flavours in and around the forest”
A selection of mignardises featuring five flavour combinations were served – two in particular stood out: (i) elderberry and bergamot, and (ii) pumpkin and cassia bark. These were sharply focused, with each element clearly discernible and balanced.

This was a thoroughly enjoyable meal, with both Jonnie and Therese Boer (the chef and his wife, who runs the front-of-house) playing an active role. With such easy access from Amsterdam, I wouldn’t hesitate to return for a meal and perhaps even an overnight stay in their hotel.