As we prepare to move out of our neighborhood, we thought we’d revisit our favourite spots while they’re still within walking distance – Mourad is definitely one of them (even though I’ve only made one post about it on this blog). We usually enjoy their lavish family-style la’acha dinners, but tonight we decided to go for the tasting menu – something I haven’t done since my first visit 2.5 years ago. 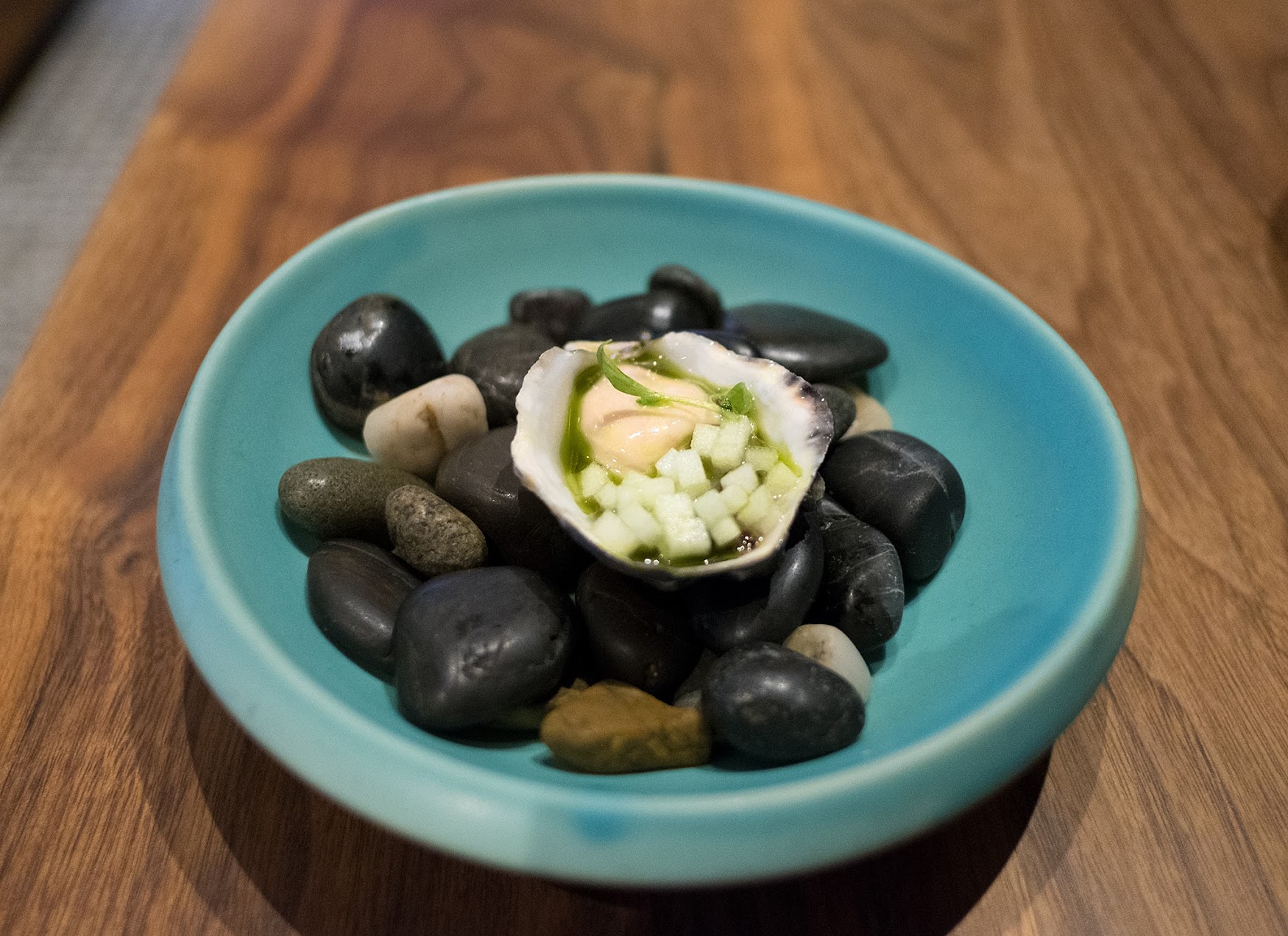 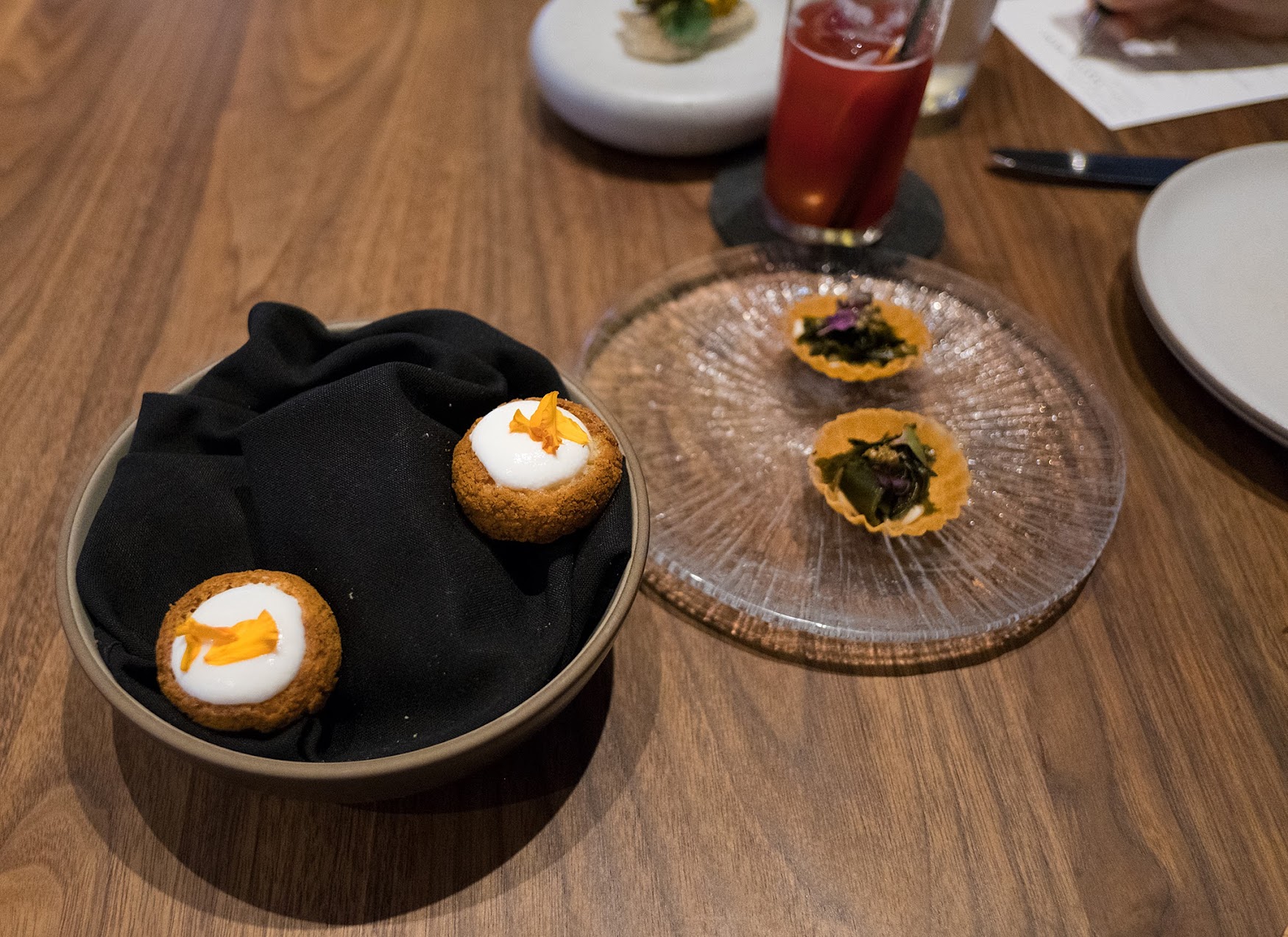 Harissa puff, goat cheese
Seaweed tartlet, potato
Dinner began with a series of three snacks, the strongest of which wast the harissa puff. From appearance, we expected a dense croquette with a creamy topping. Instead, it had an airy texture and was filled with goat cheese mousse – intense but so light. 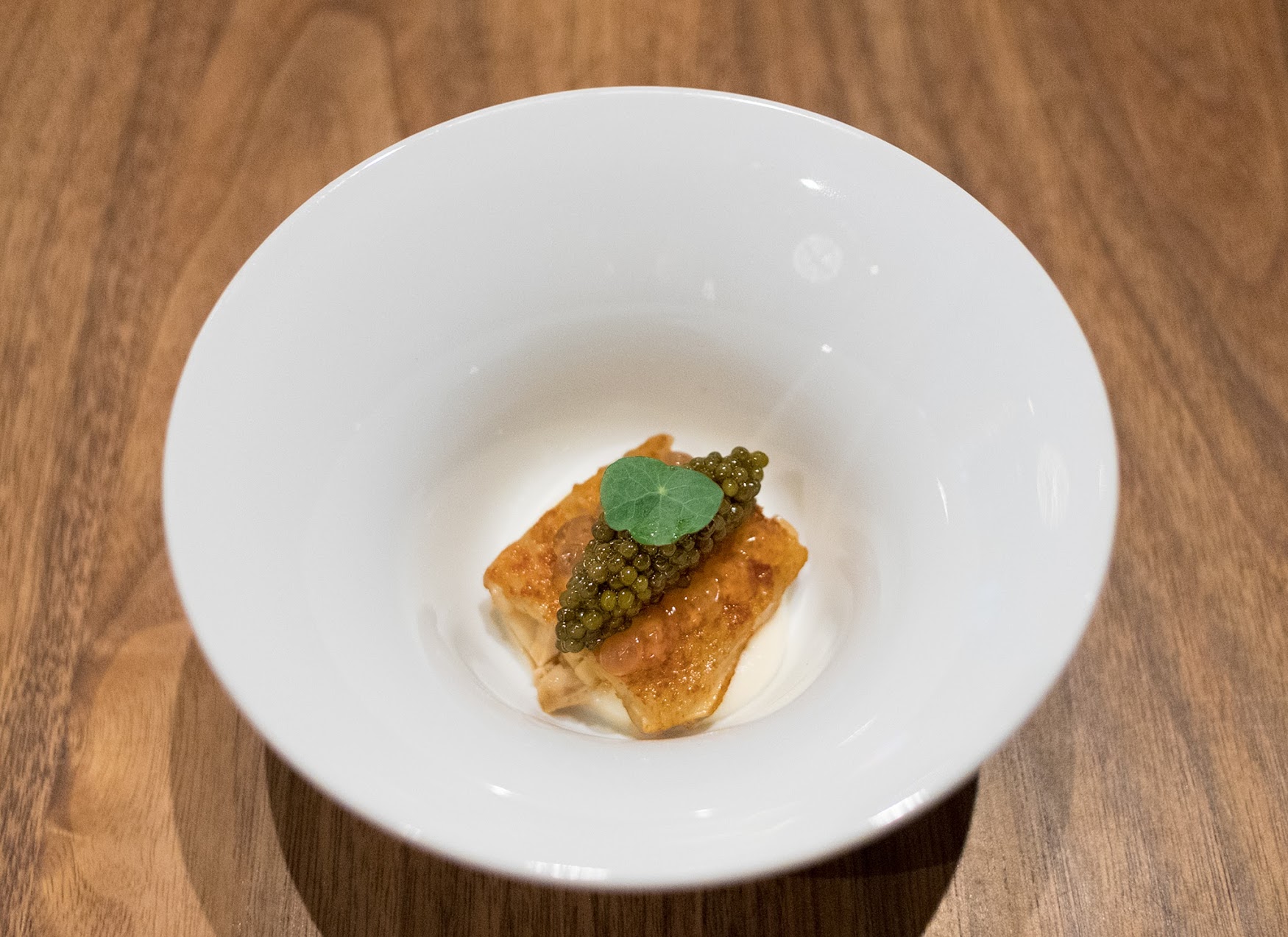 Caviar
Harissa-cured chicken wing, onion soubise, maple gel
Caviar was billed as the highlight of this dish on our menu, but really it was the fantastic chicken that shone. The tender wing was placed over an onion soubise and spread with some sweet maple gel, which served to balance the briny roe. 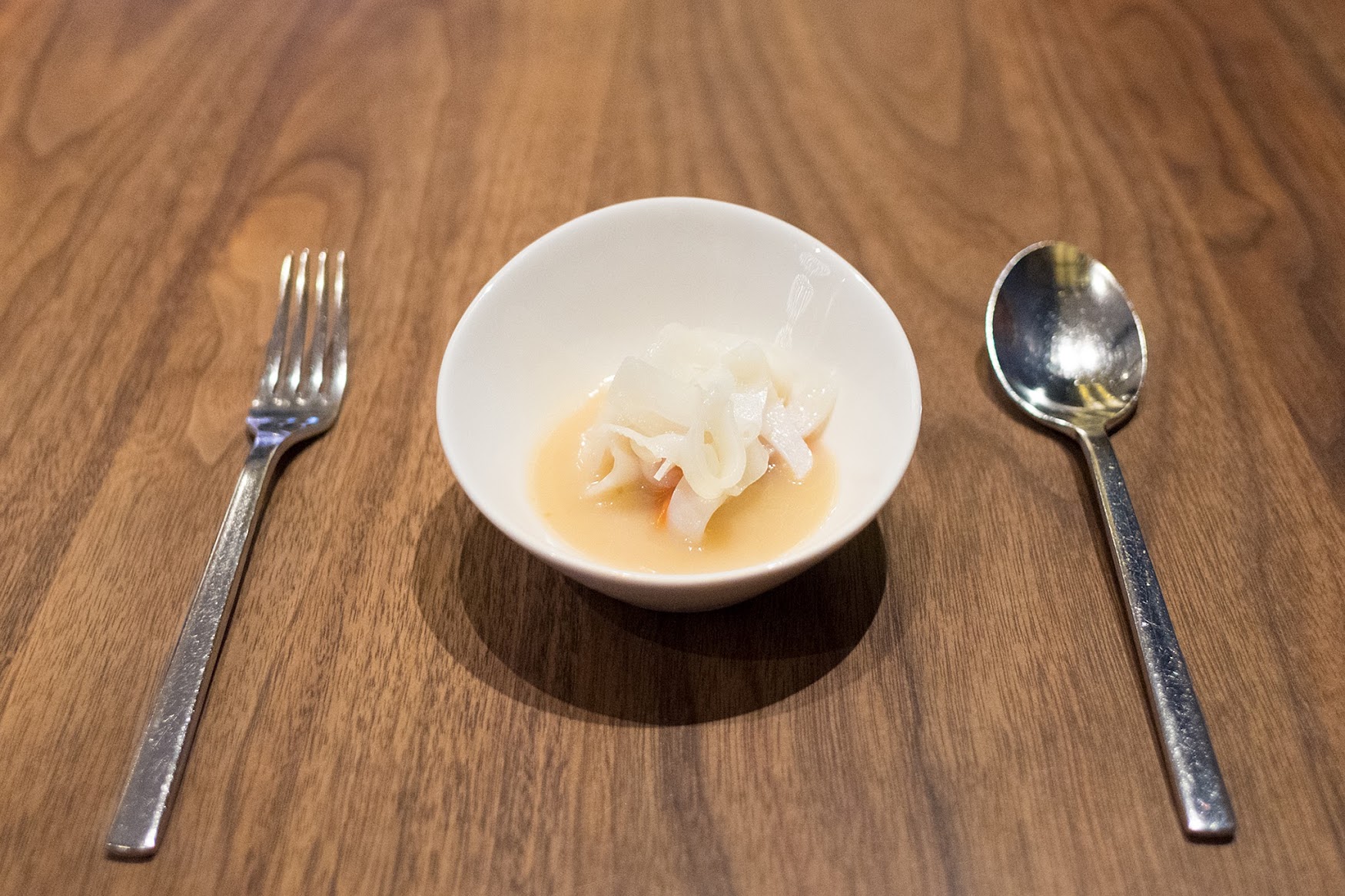 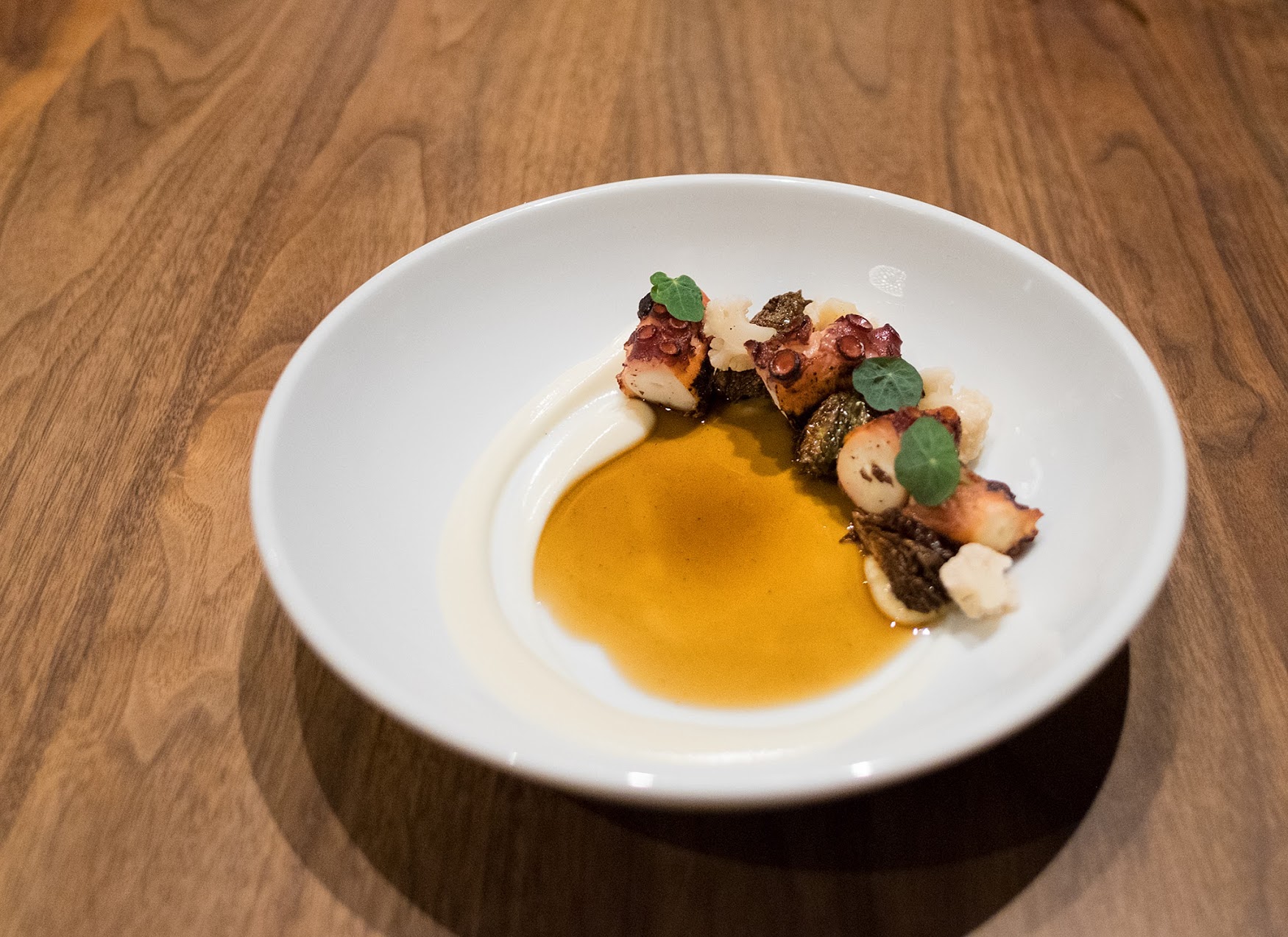 Octopus
Brussel sprouts, cauliflower, mustard, preserved lemon
A gift from the kitchen, the grilled octopus had just the right amount of chew. The broth underneath, of urfa and mushrooms, was earthy and spicy – an interesting complement to the brussel sprouts and preserved lemon. One of my favourite dishes of the evening. 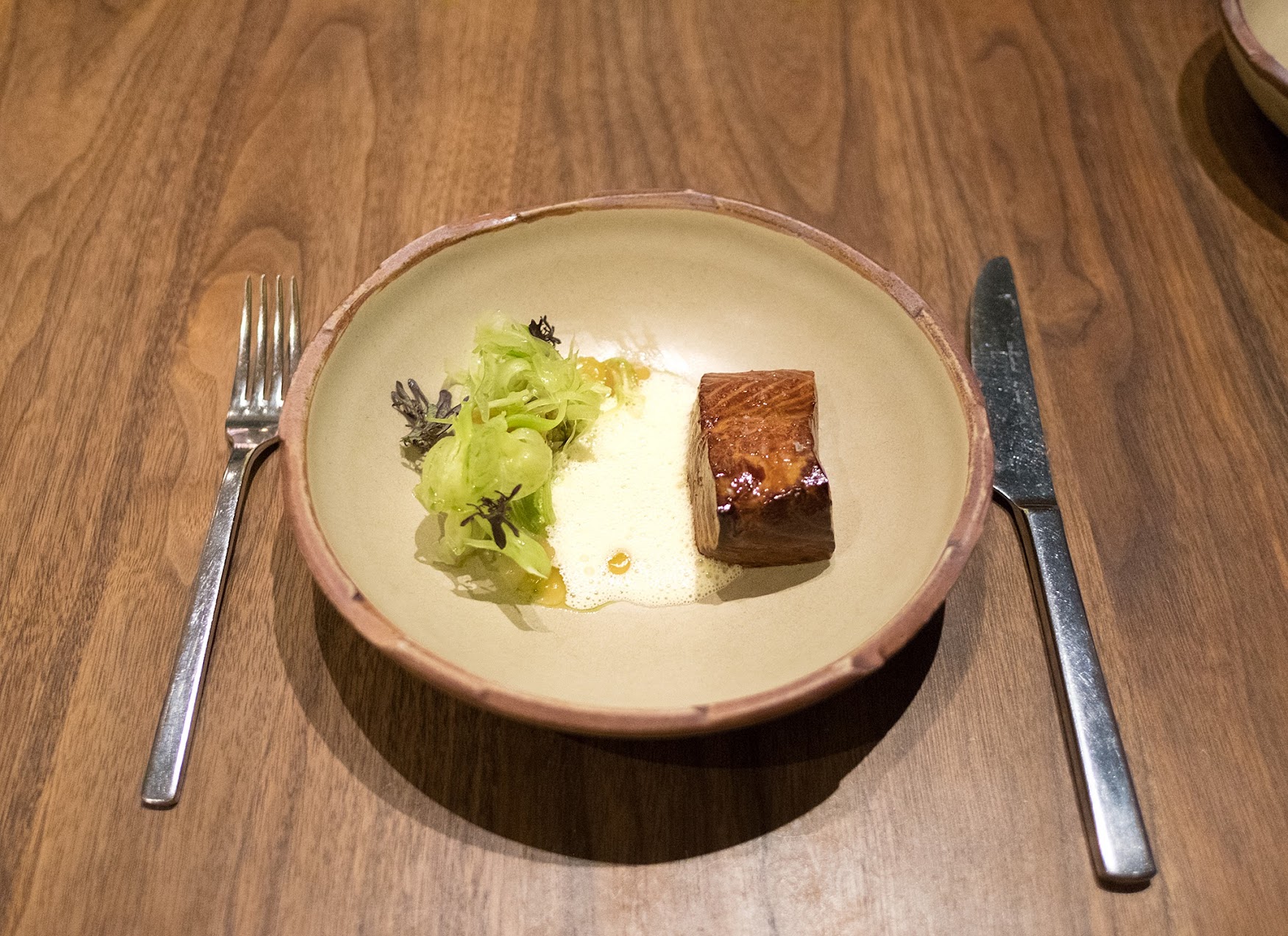 Applewood-smoked salmon
Fennel, blood orange, olive, fresh z’hug
I was concerned that the fish looked dry when it arrived, but the citrus brown butter glaze was deceiving – the salmon was perfectly cooked. It was paired with a frothed sauce Maltaise, to mellow out the punchy olive and fennel salad. 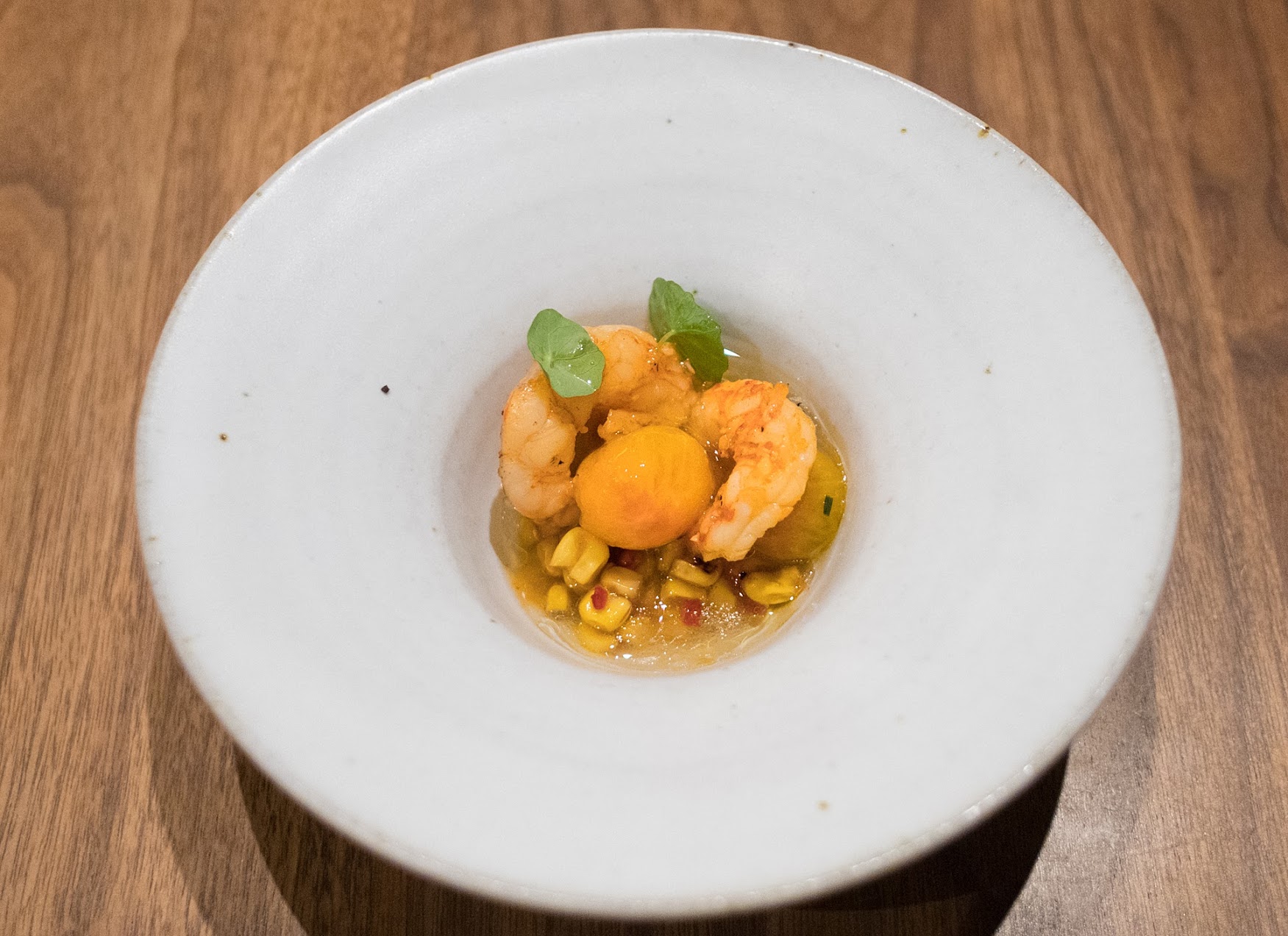 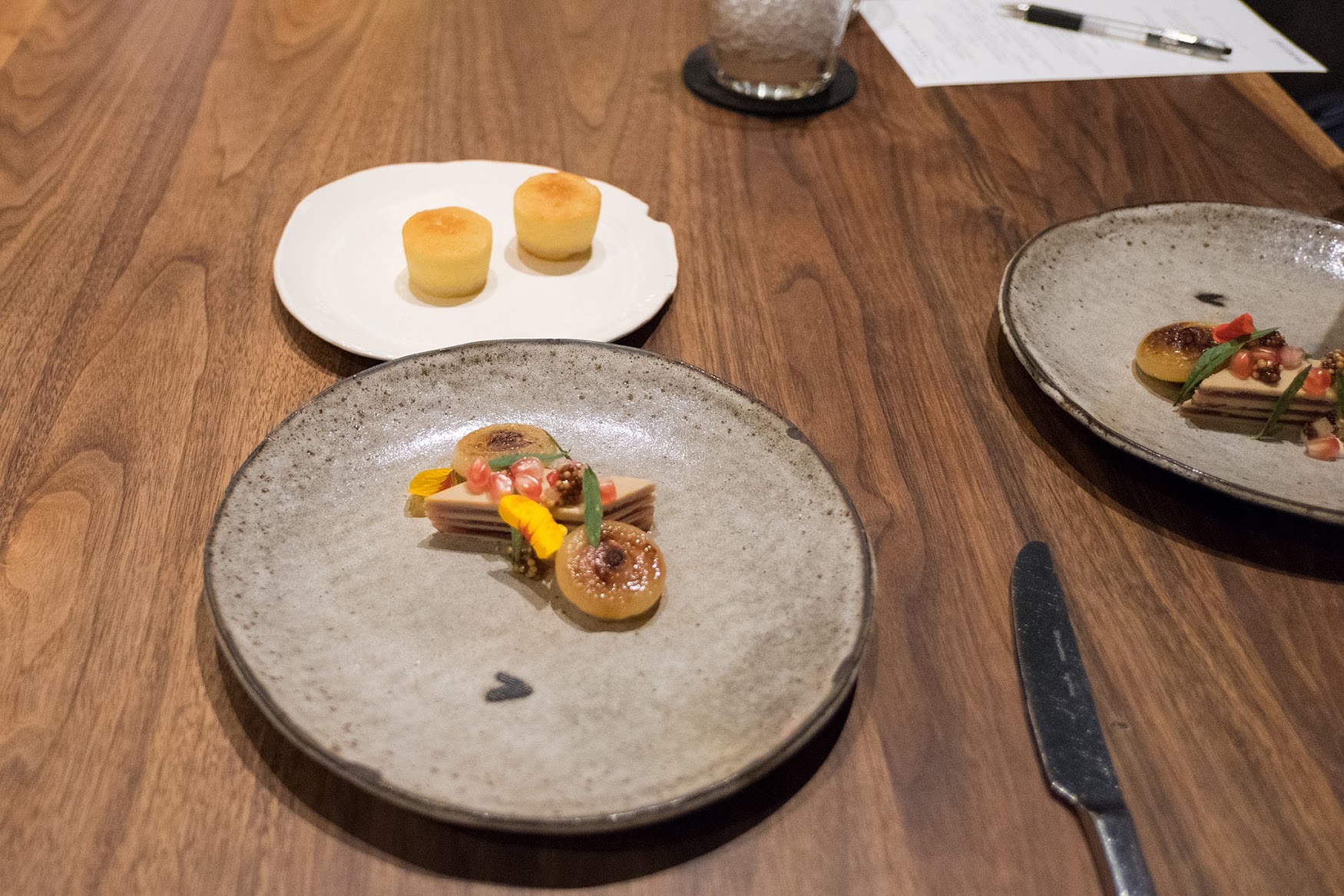 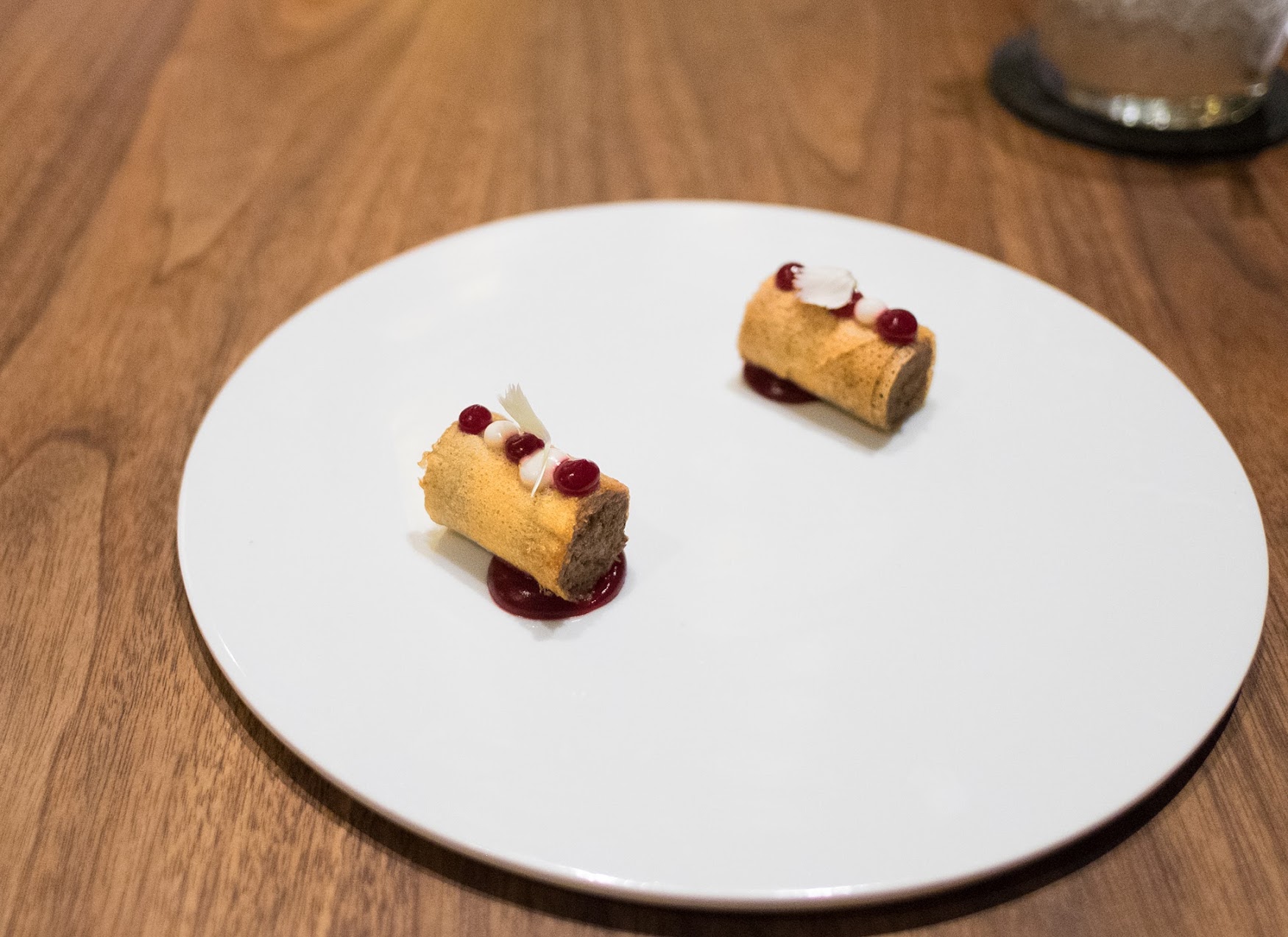 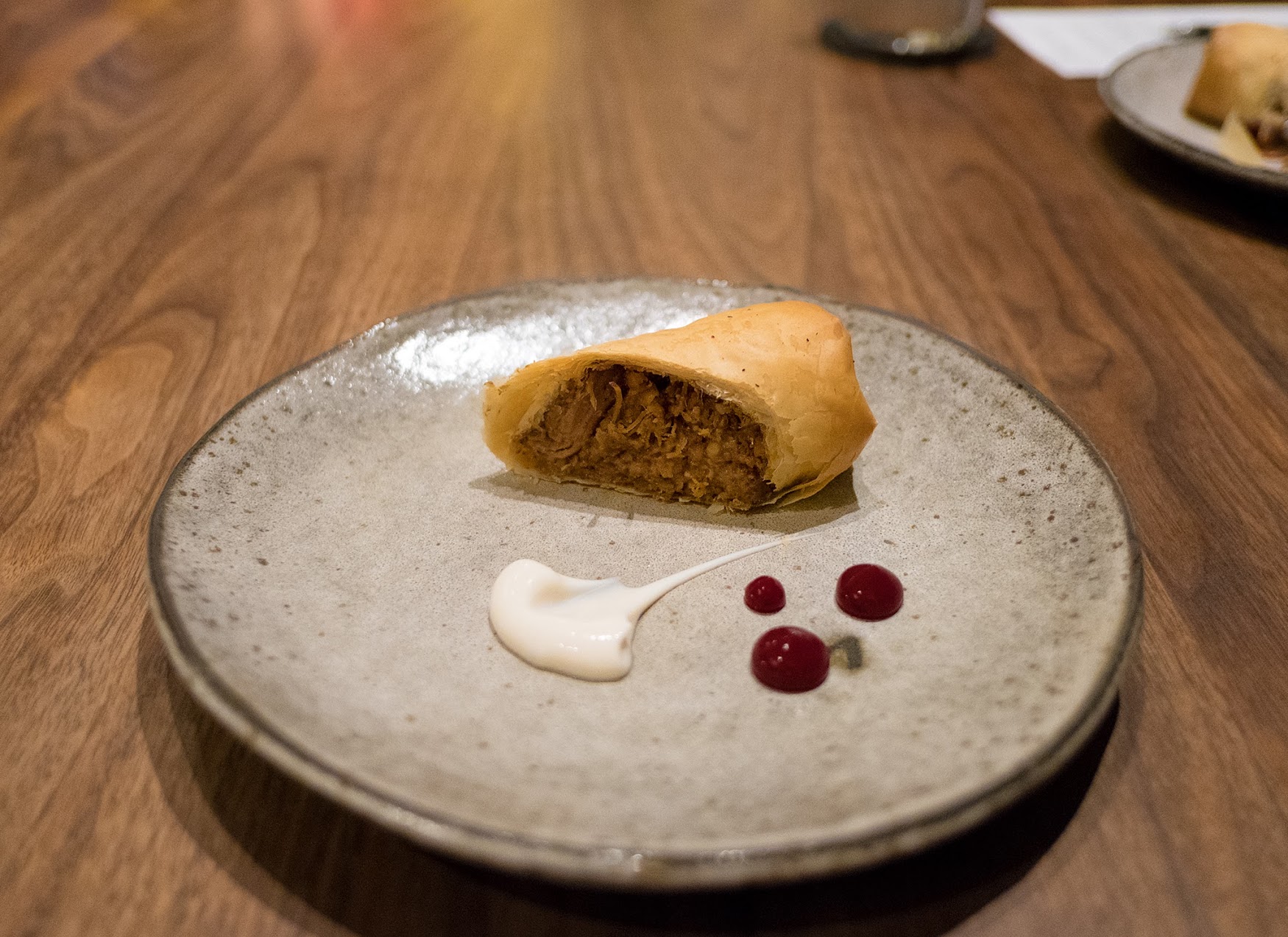 Basteeya
Verjus crême fraiche, blackberry jam
We ordered the duck basteeya (bottom) as a supplement to the tasting menu. It arrived with little cylinders of beef basteeya (top), to compare and contrast. In both cases, the fillings of meat and golden raisins, almond, and caramelized onion were very well-seasoned. We had a split decision on which was better. 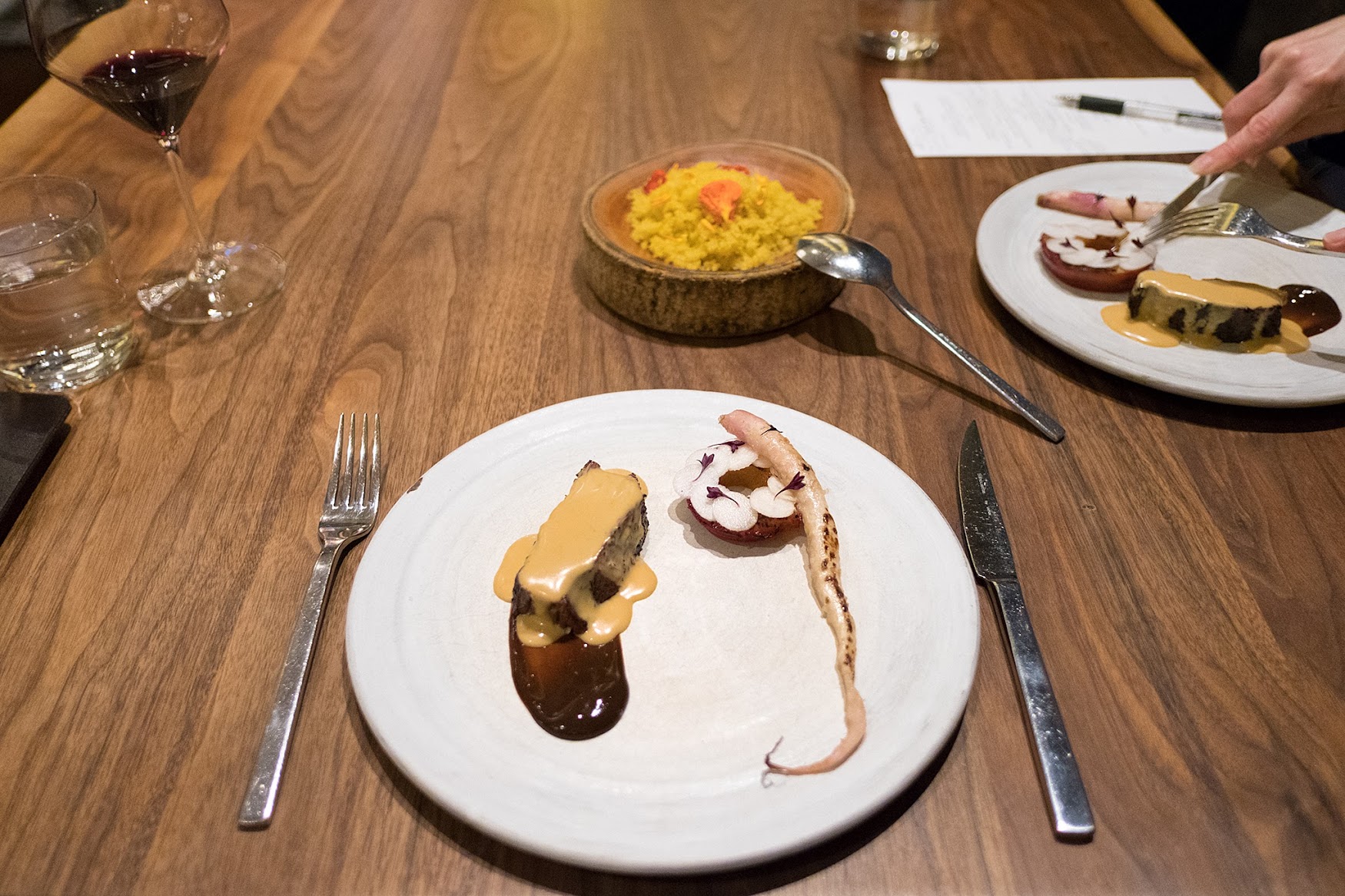 72-hour braised short rib and brown butter couscous
Black garlic, hakurei turnip, grilled plum
We were quite impressed by the short rib, which I normally find quite pedestrian. Mourad’s famed couscous was also up to its usual high standard tonight – I don’t think I’ve had much better anywhere else. 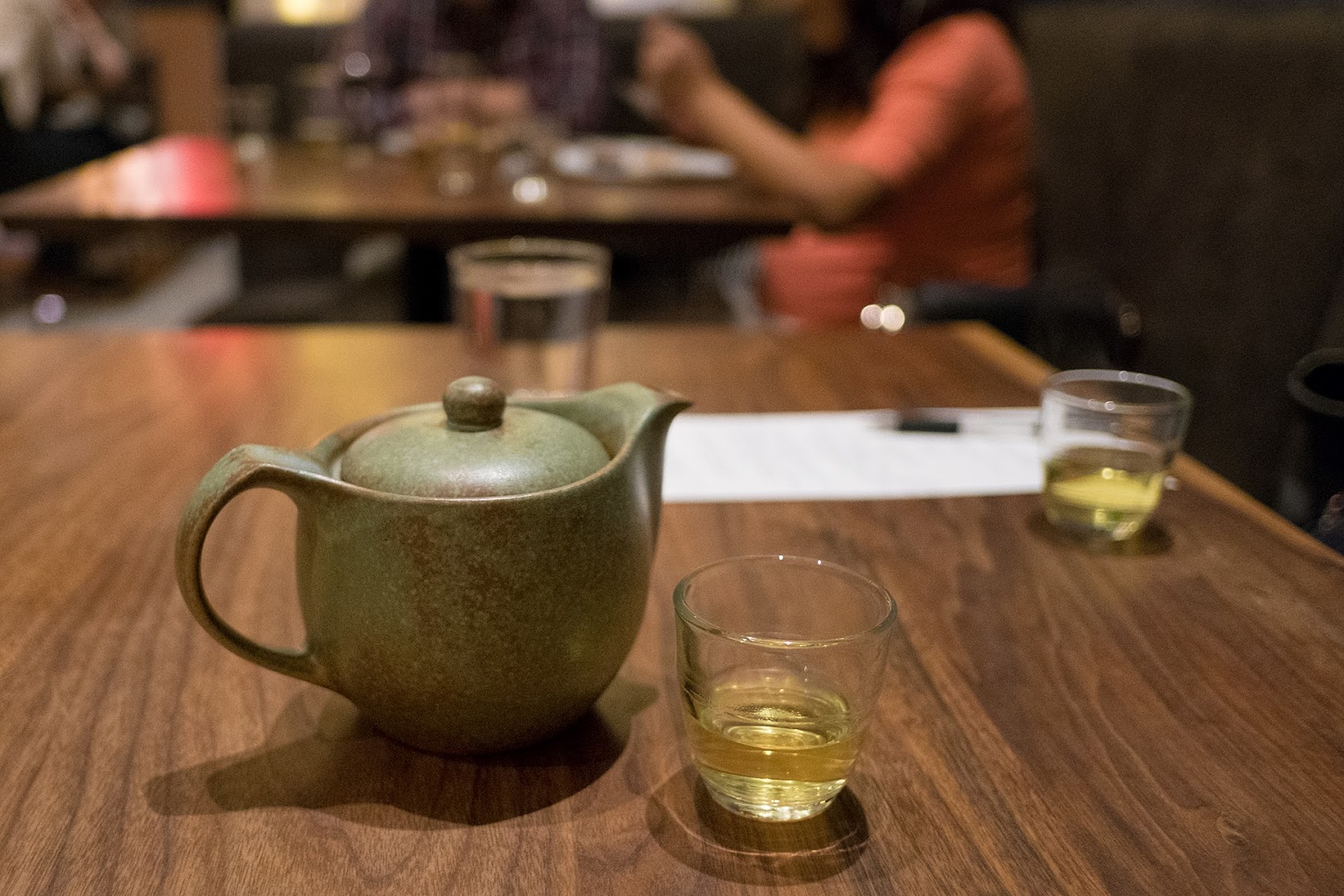 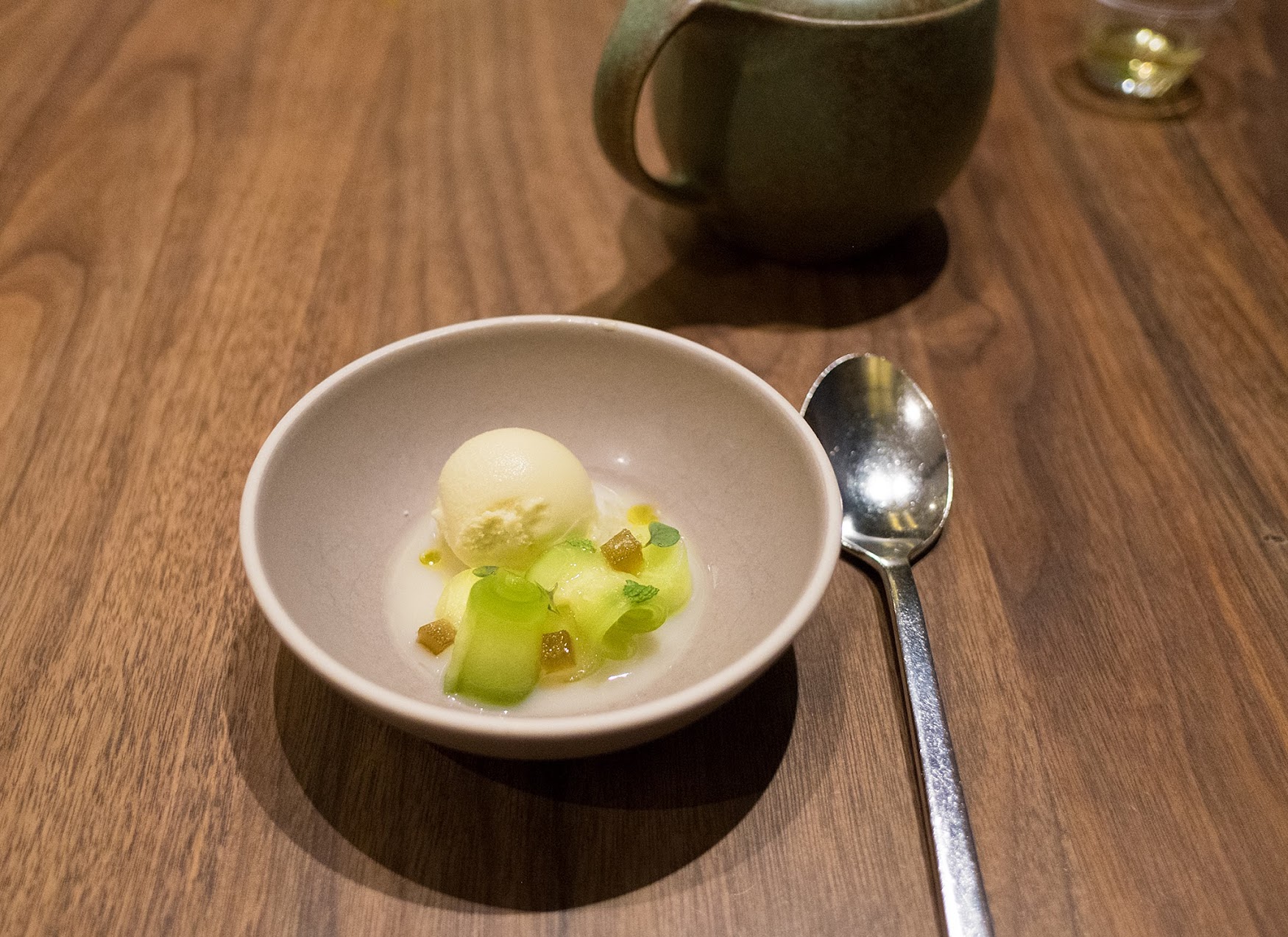 Melon, holy basil, cucumber
Wow, one of the best desserts I’ve had this year! A sorbet of melon sat in a pool of melon milk, surrounded by bits of compressed melon and salted cucumber. There were also these amazing tiny cubes of cucumber pâte de fruit – chewy and bursting with flavour, like the boba of your fantasies. Rounding everything off, the herbal notes of holy basil bridged the sugar and salt in the rest of the dish – genius. 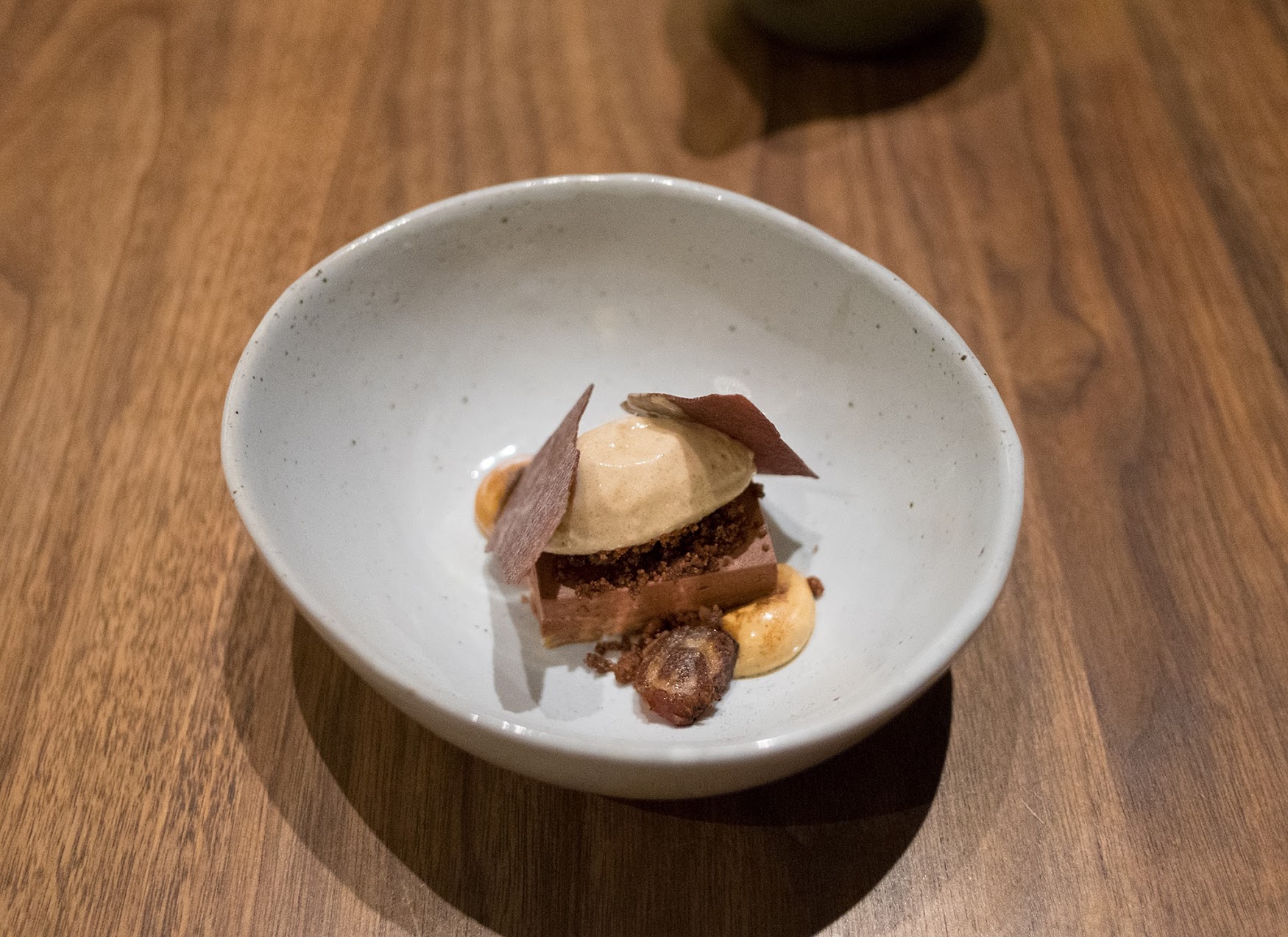 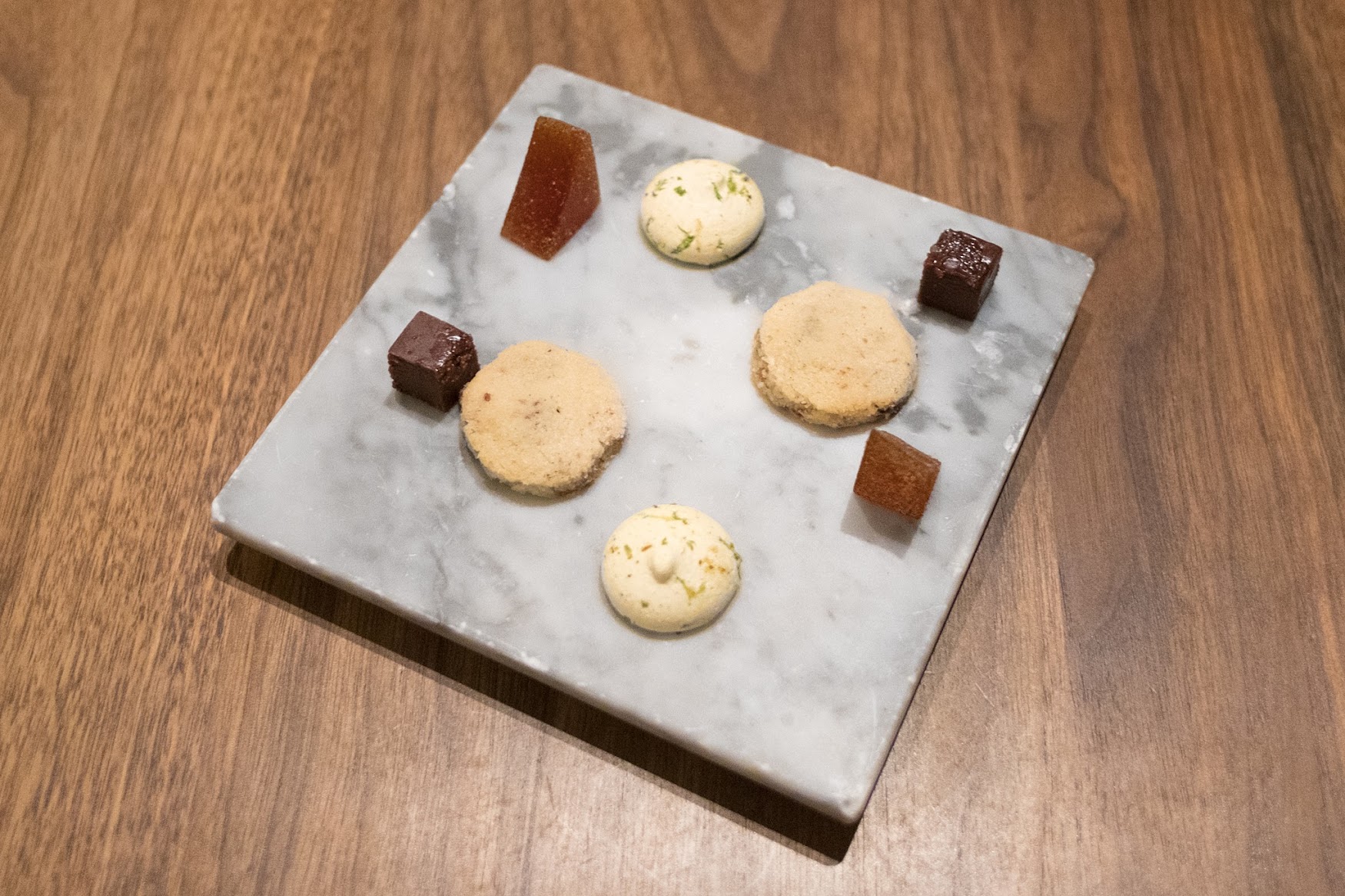 A superb meal, and one of, if not the best tasting menu at its price point – this place, I think, is underrated. With Aziza currently shuttered, it’s also the only venue for one to get a taste of Mourad Lahlou’s exquisite interpretation of Moroccan cuisine. I hope to continue visiting this gem for a long time.