This meal was completely unplanned. A day before we left for Copenhagen, I received an email notifying me of a lunch availability (for six people, no less!) on noma’s last day – how could we refuse? And so, some last-minute shuffling had to be done (including canceling a rather anticipated lunch at Lumskebugten), and we found ourselves on the wharves at noon, ready to partake in the restaurant’s penultimate meal service. 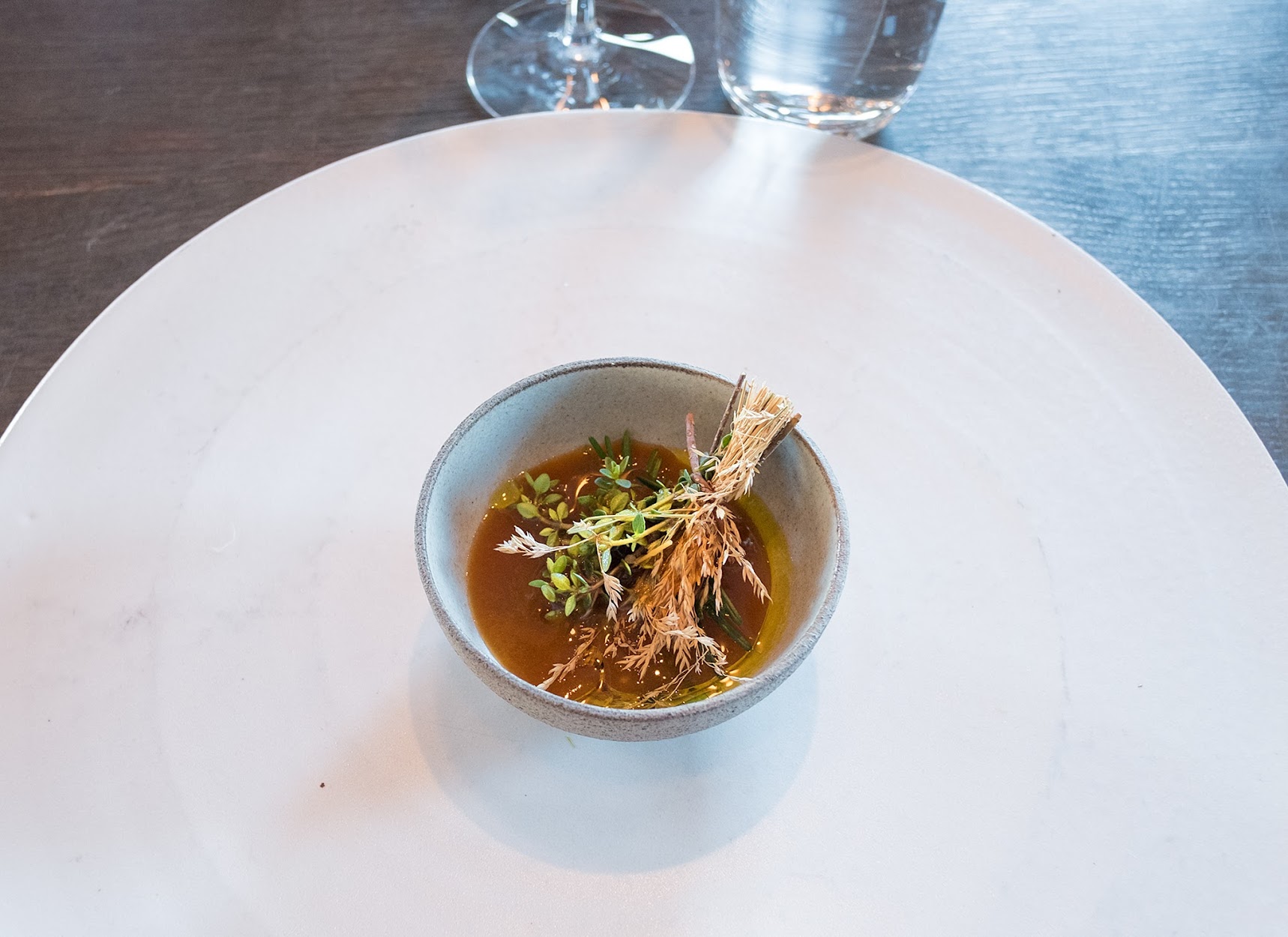 Cloudberry broth
A bouquet of thyme, hay and lemon thyme 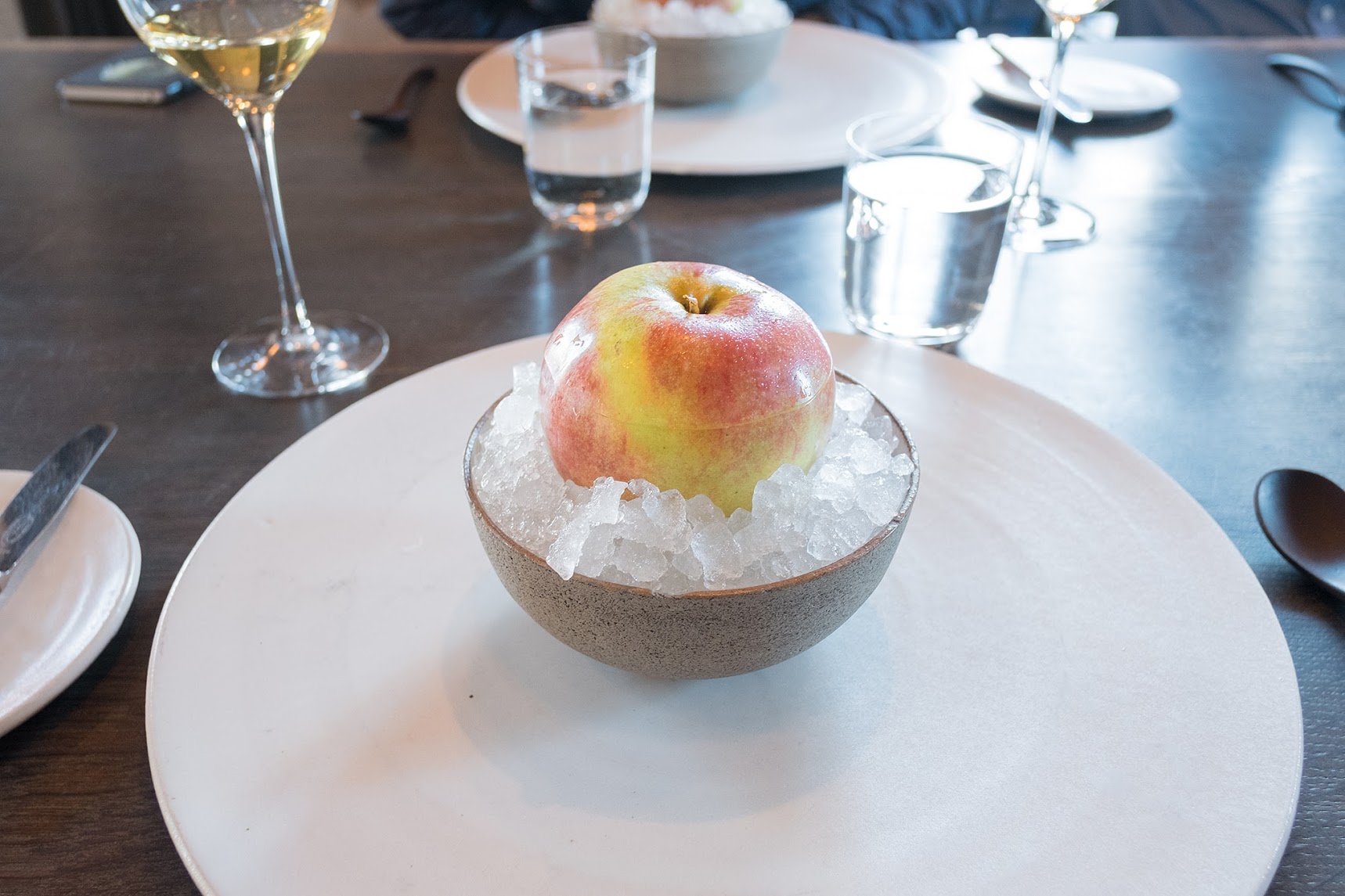 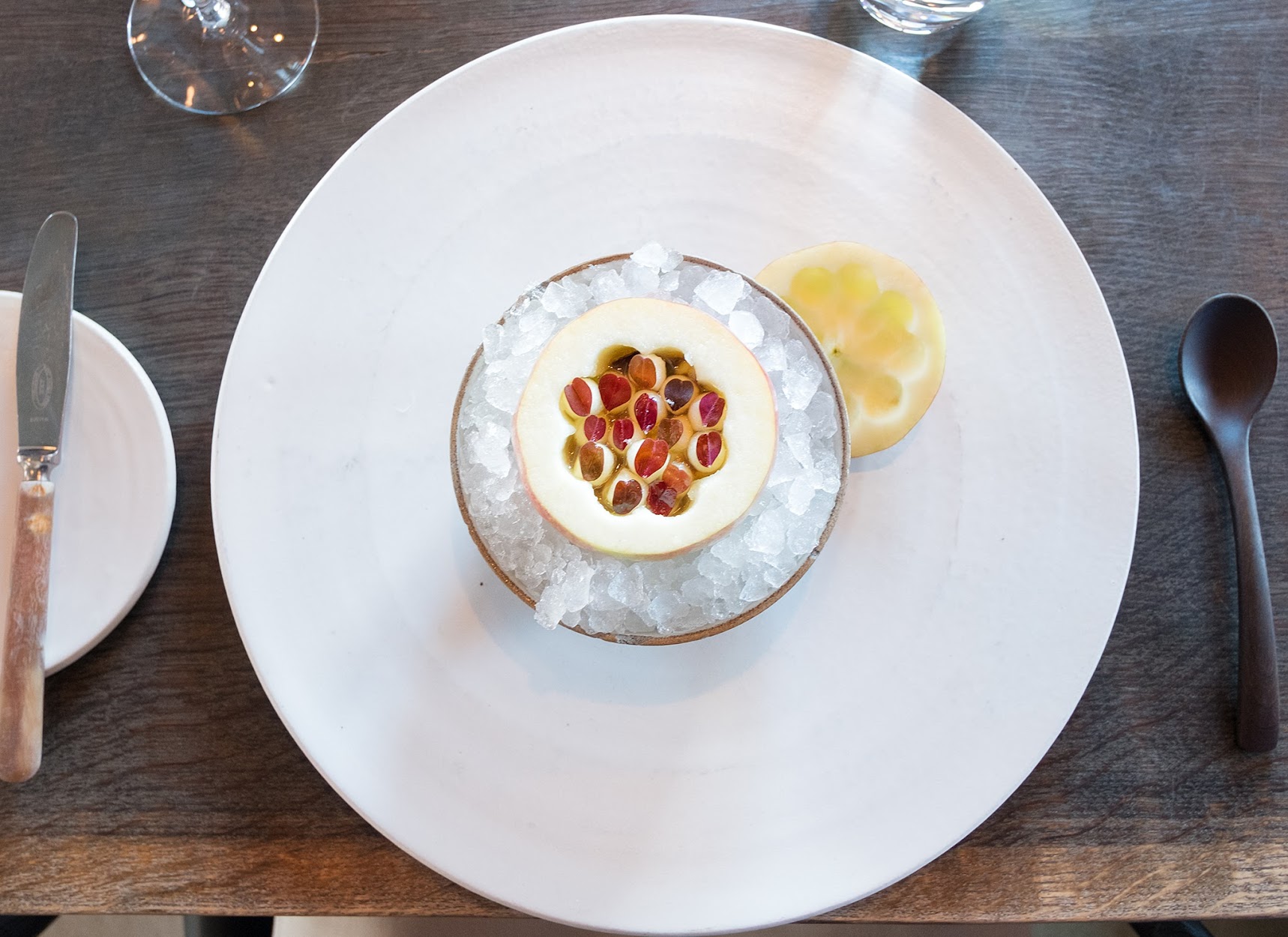 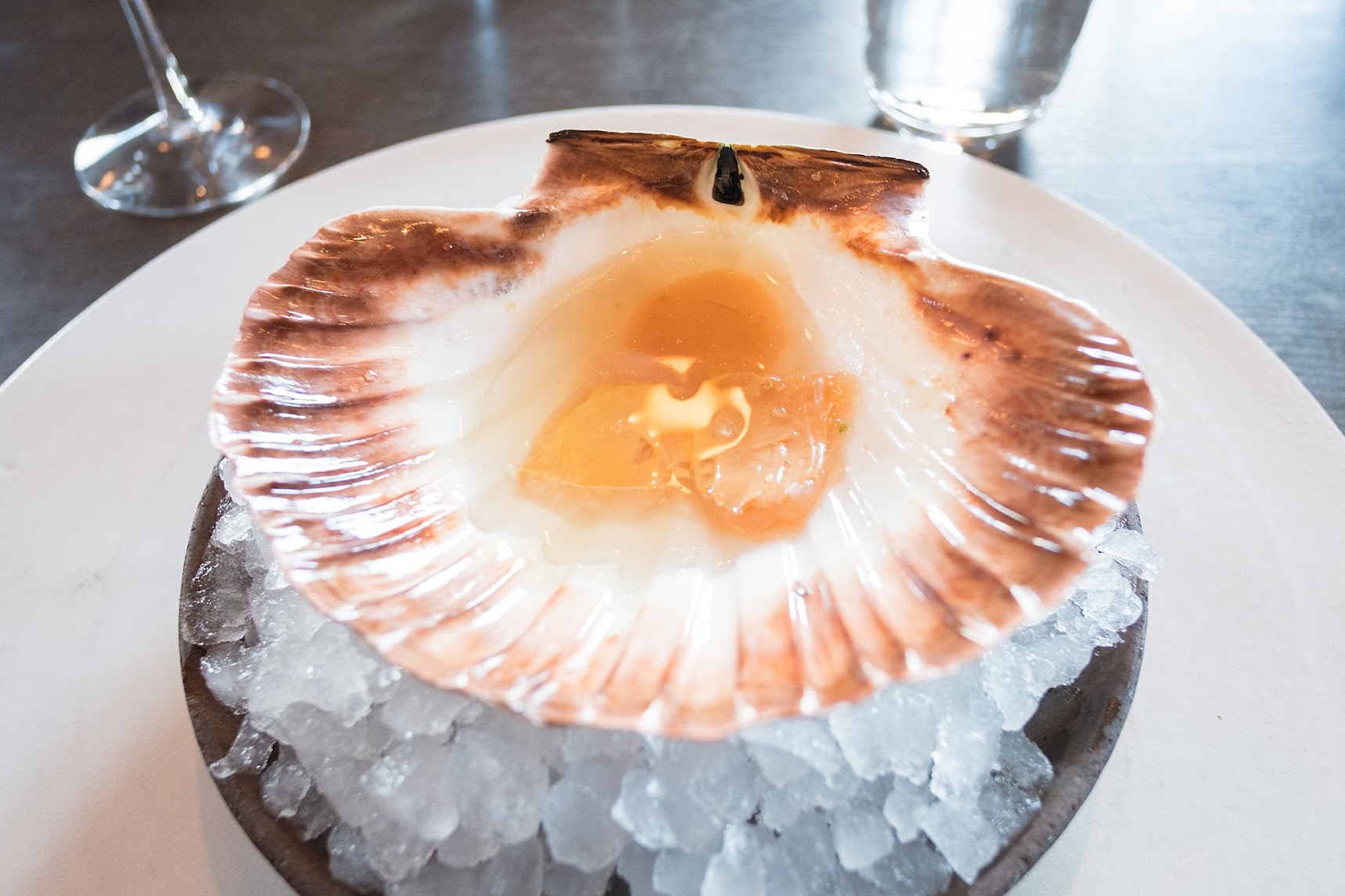 Hand-dived scallop, mussel juice, vegetable reduction
Another fine specimen from Norway, the thinly-sliced scallop was bathed in a briny juice that was given extra body by a dark, umami vegetable reduction – the dish tasted at once of the sea and the earth. Excellent. 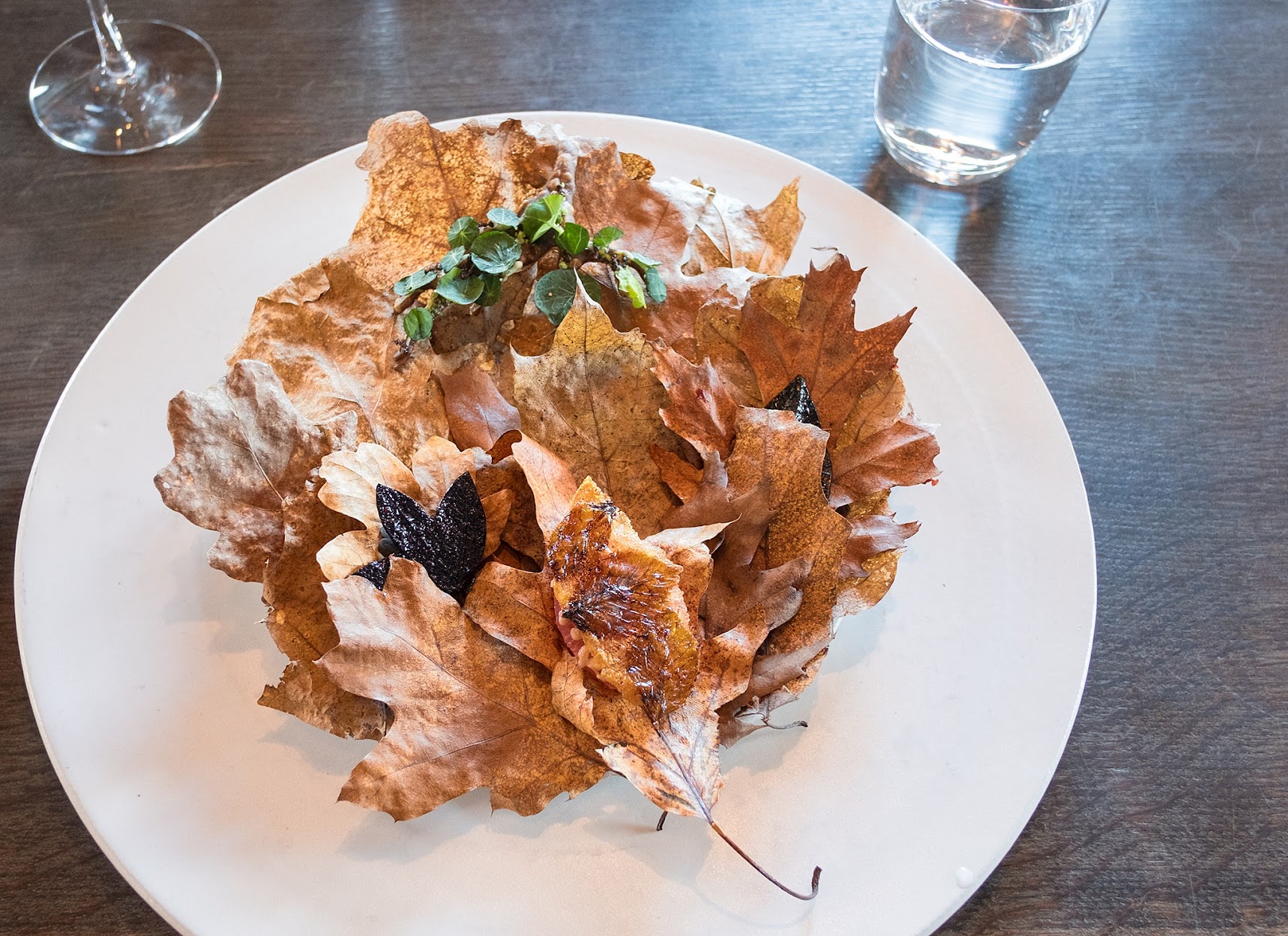 “A winter platter”
Pear, blackcurrant, ants, black garlic
Four presentations were hidden amongst the dried leaves (clockwise from bottom): (1) a strip of dried pear with crispy birch leaves; (2) blackcurrant fruit leather and oxalis; (3) a “twig” of flatbread with red wood ants; (4) a soft “leaf” of black garlic, famously from noma’s time in Tokyo. The ants, with their strong tanginess from the formic acid, were remarkable – my favourite of the bites. 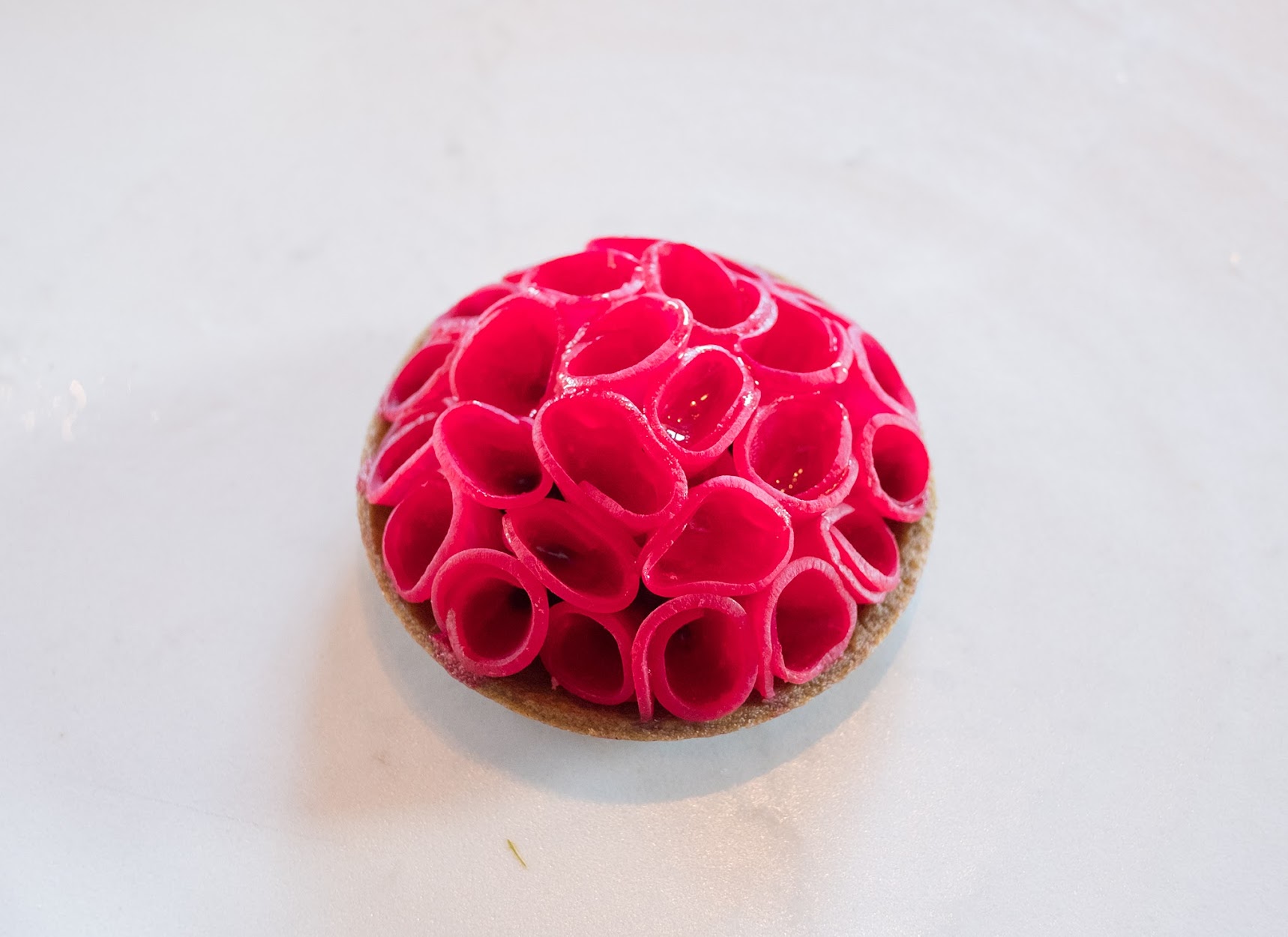 Radish pie
Horseradish oil, roasted sea kelp, fudge
Radishes colored by beet juice were carefully arranged in a little pie. Holding things in place was a “fudge” made from cucumber juice, and flavoured with yeast extract and coriander – its intensity was amazing! 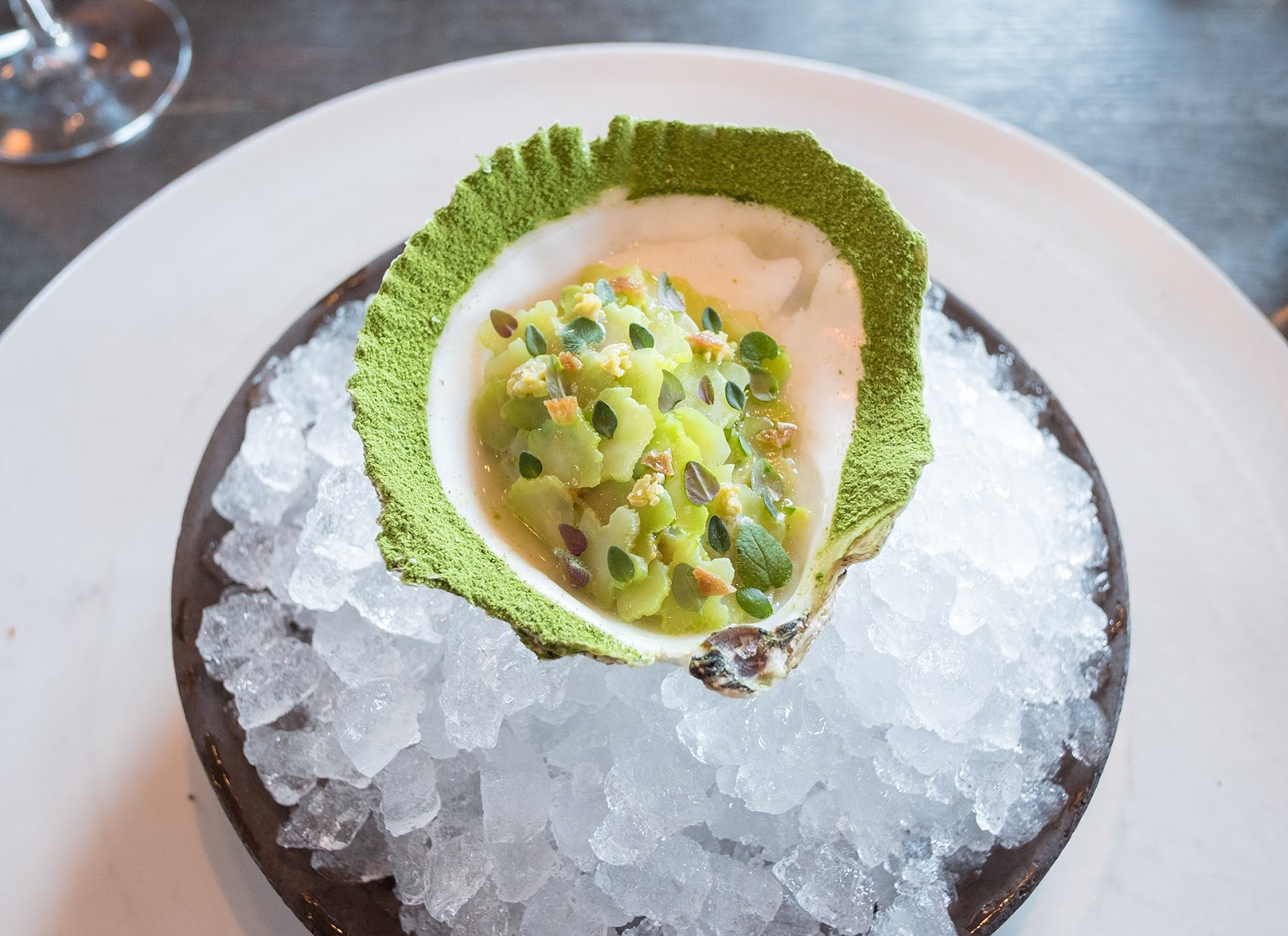 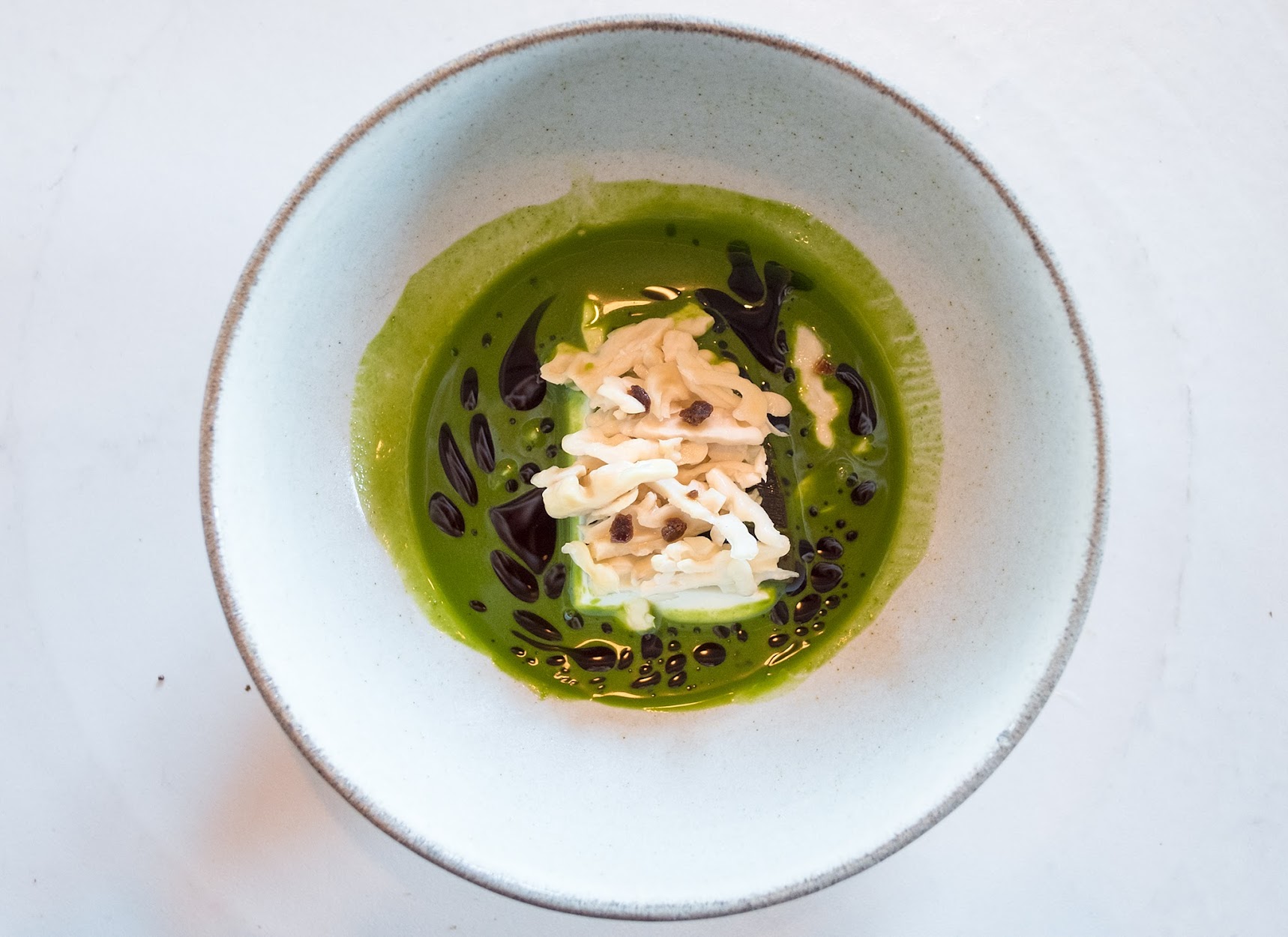 Fresh steamed milk curd
Unripe walnuts, parsley, kelp, dried berries, mushrooms
A variation on a dish that was (I believe) originally developed for their 2015 Tokyo residency. The milk curd was impressively made – as good as any silken tofu and certainly more local. I really enjoyed the variety of other textures in this dish as well – creamy, chewy, crunchy, (parsley) oily. 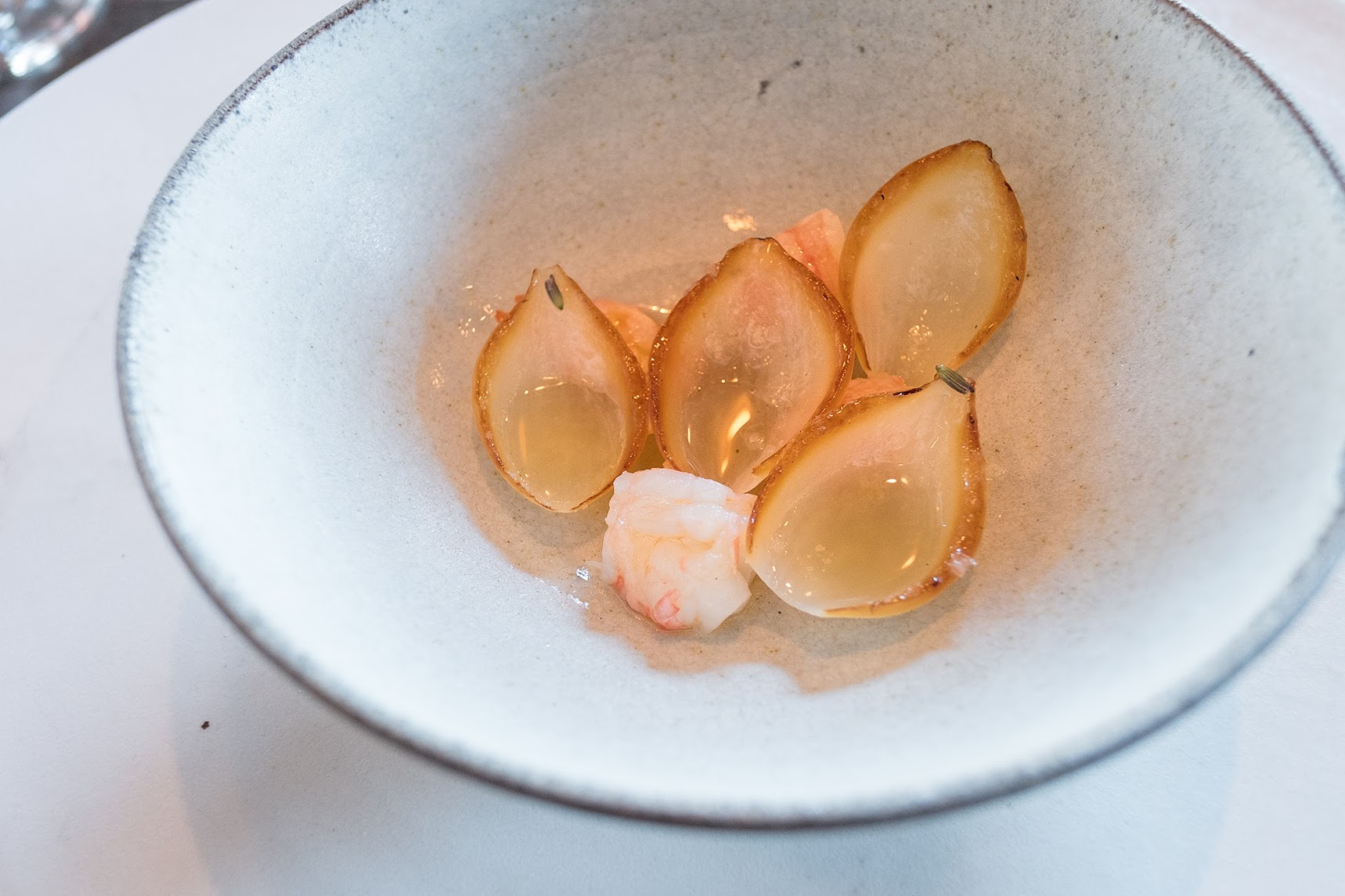 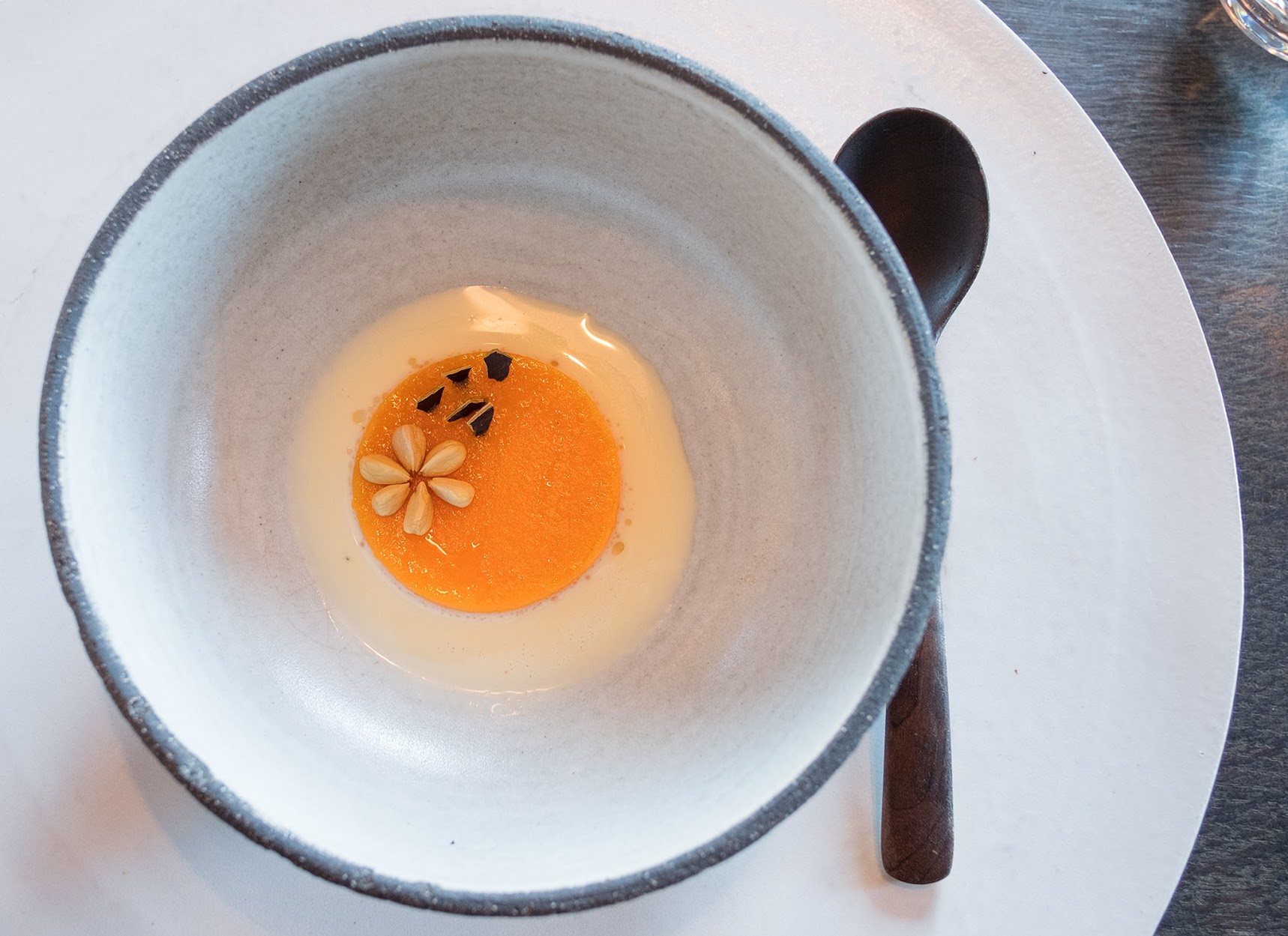 Butternut squash
Roasted beech nuts, kelp chips, barley koji
The disc of squash was unexpectedly firm, which added body to the dish. A supreme combination of ingredients made this a technical winner, but something else about this dish really connected with me visually – it was just beautiful. 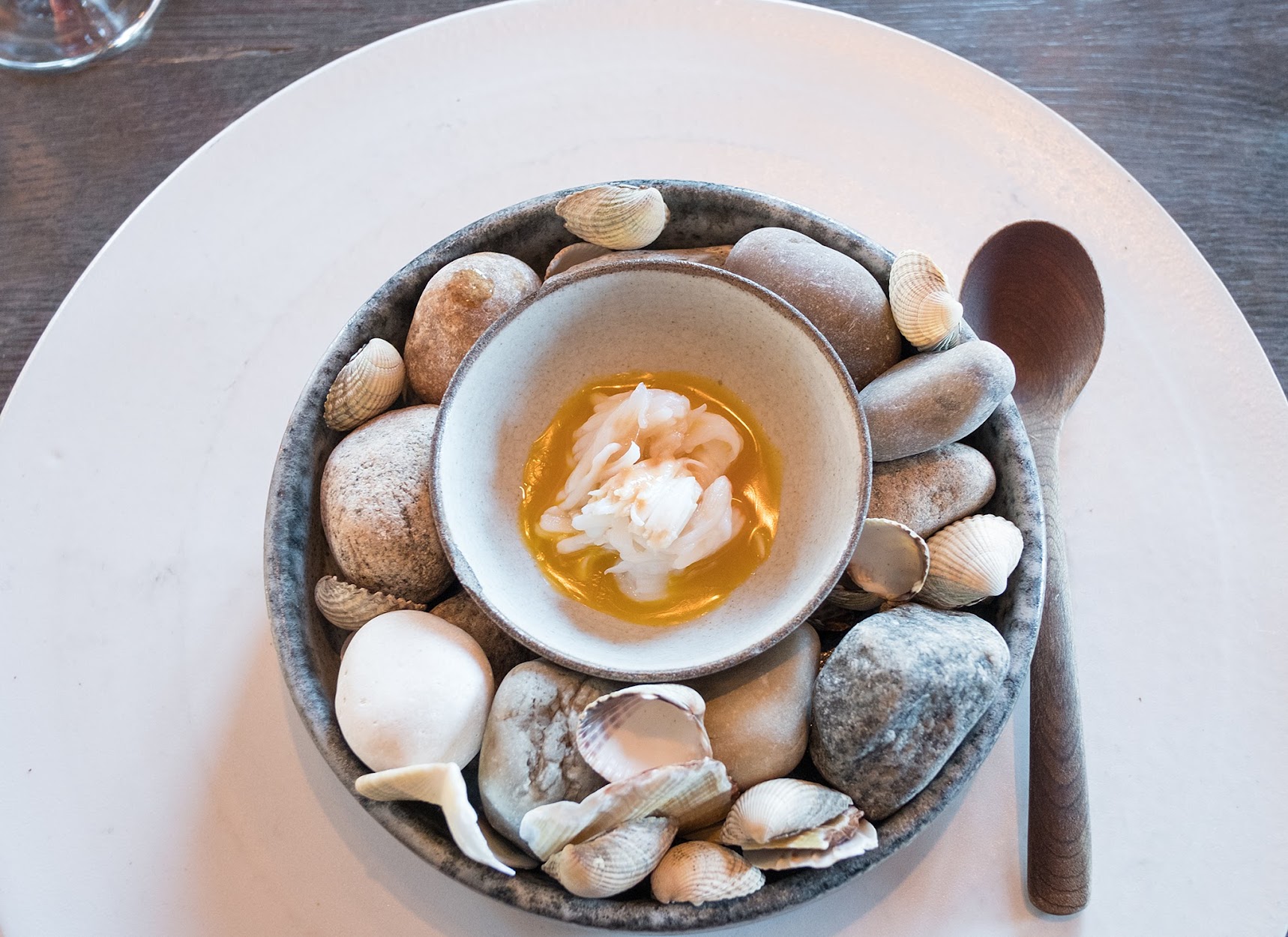 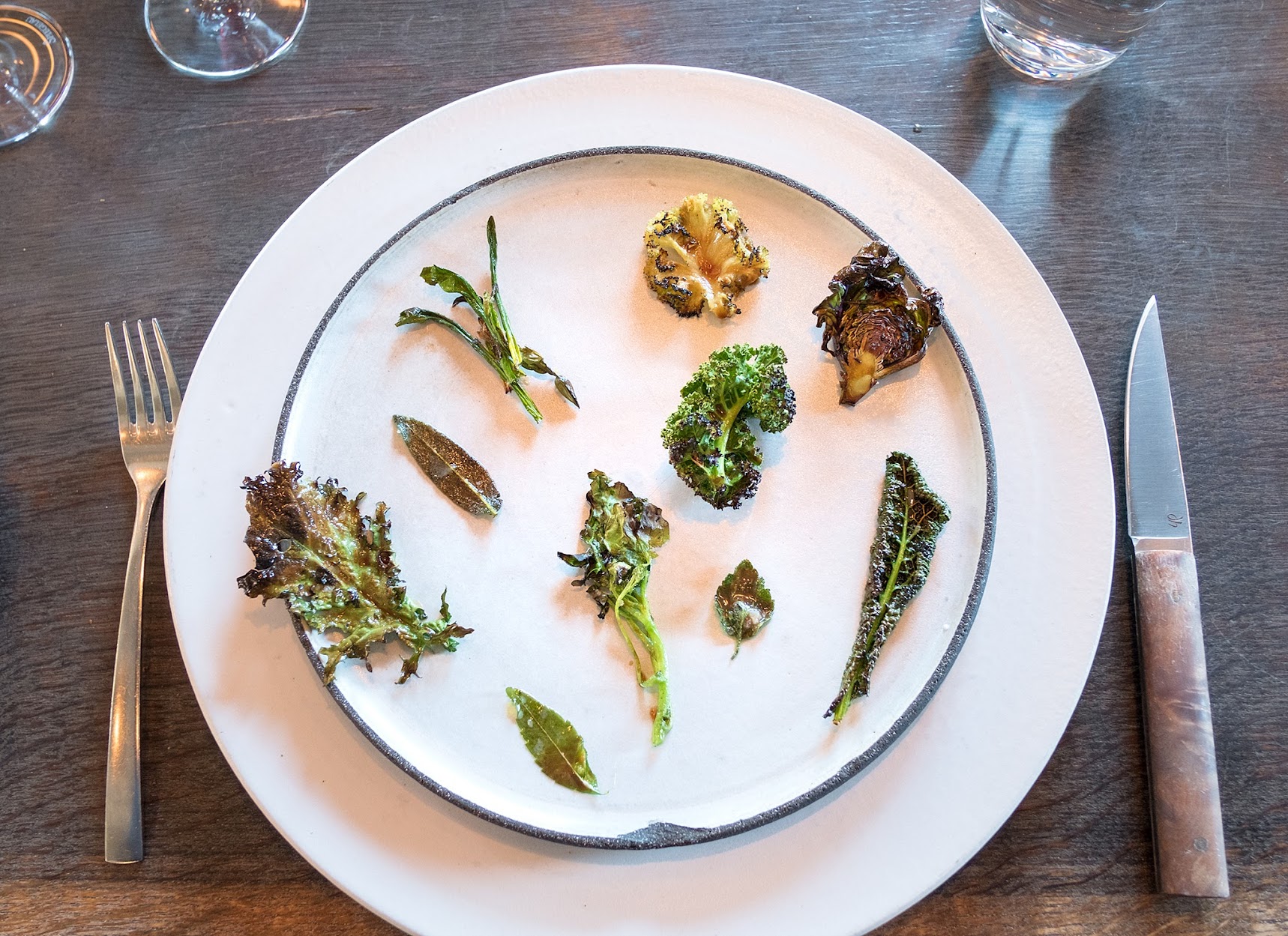 Charred winter greens, caramelized scallop sauce
The steak knife hinted at the meatiness of these vegetables, basted and grilled with a caramelized scallop reduction. Each leaf had just the right amount of char to highlight its flavour without becoming acrid – superb. 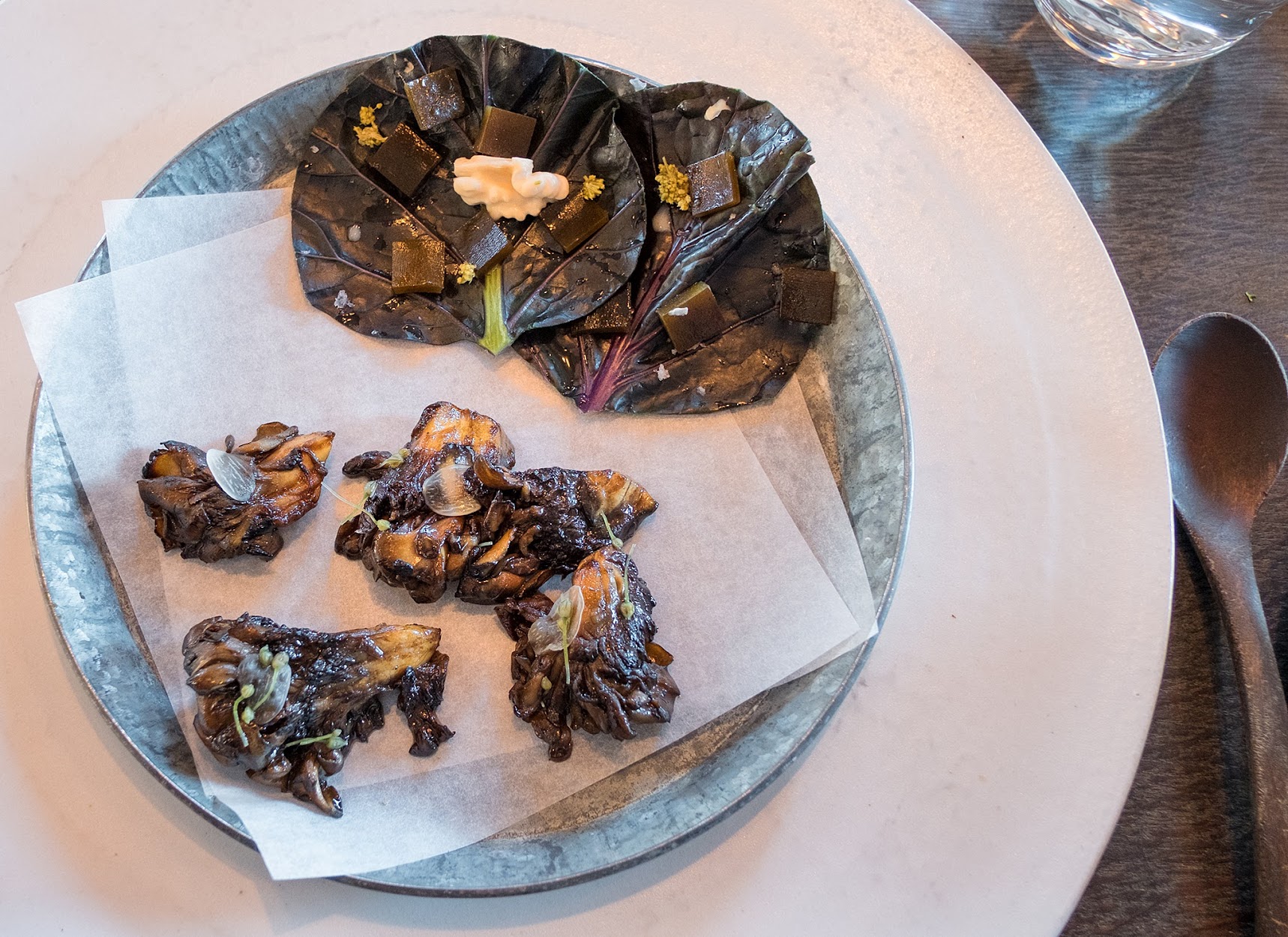 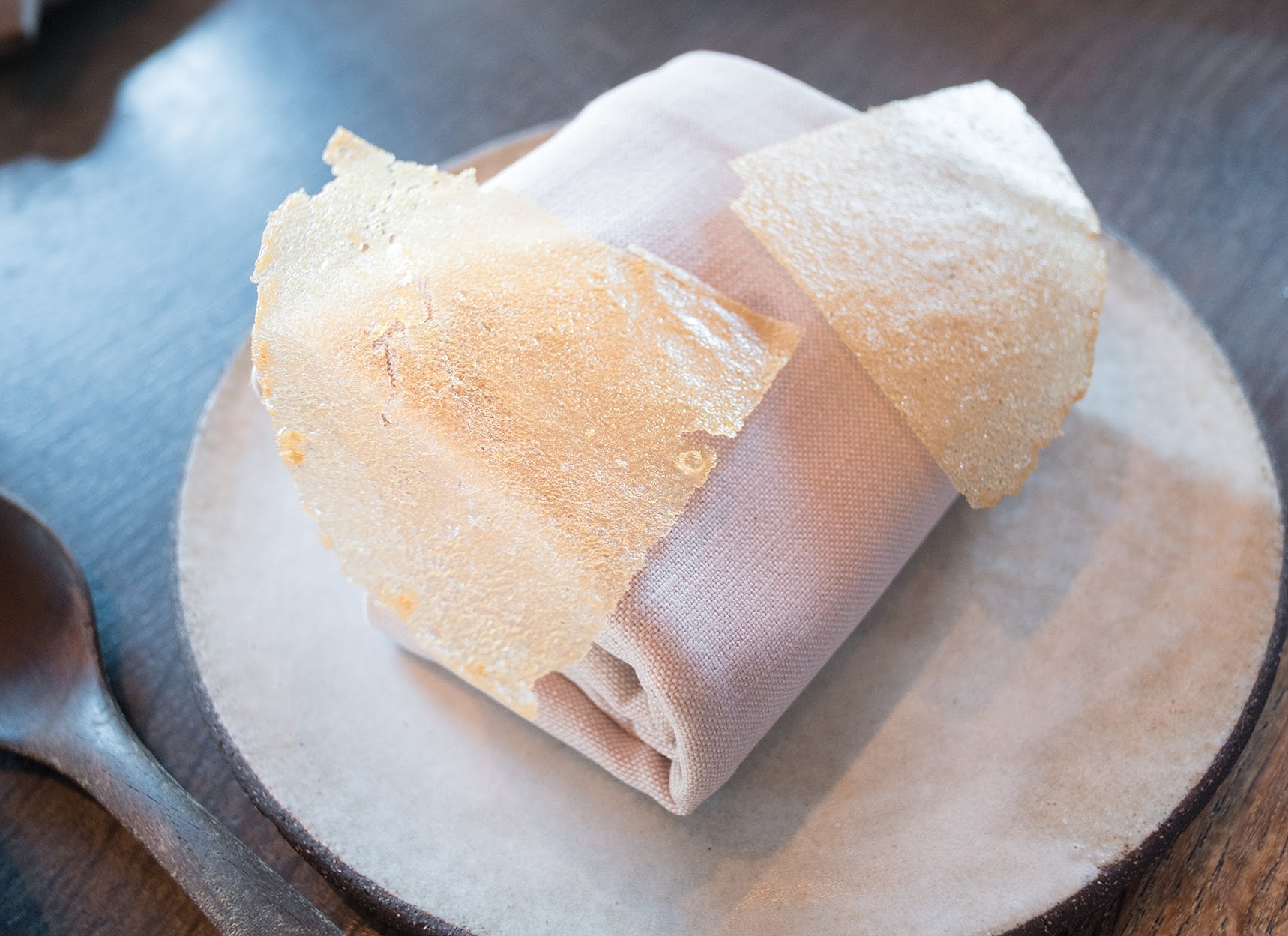 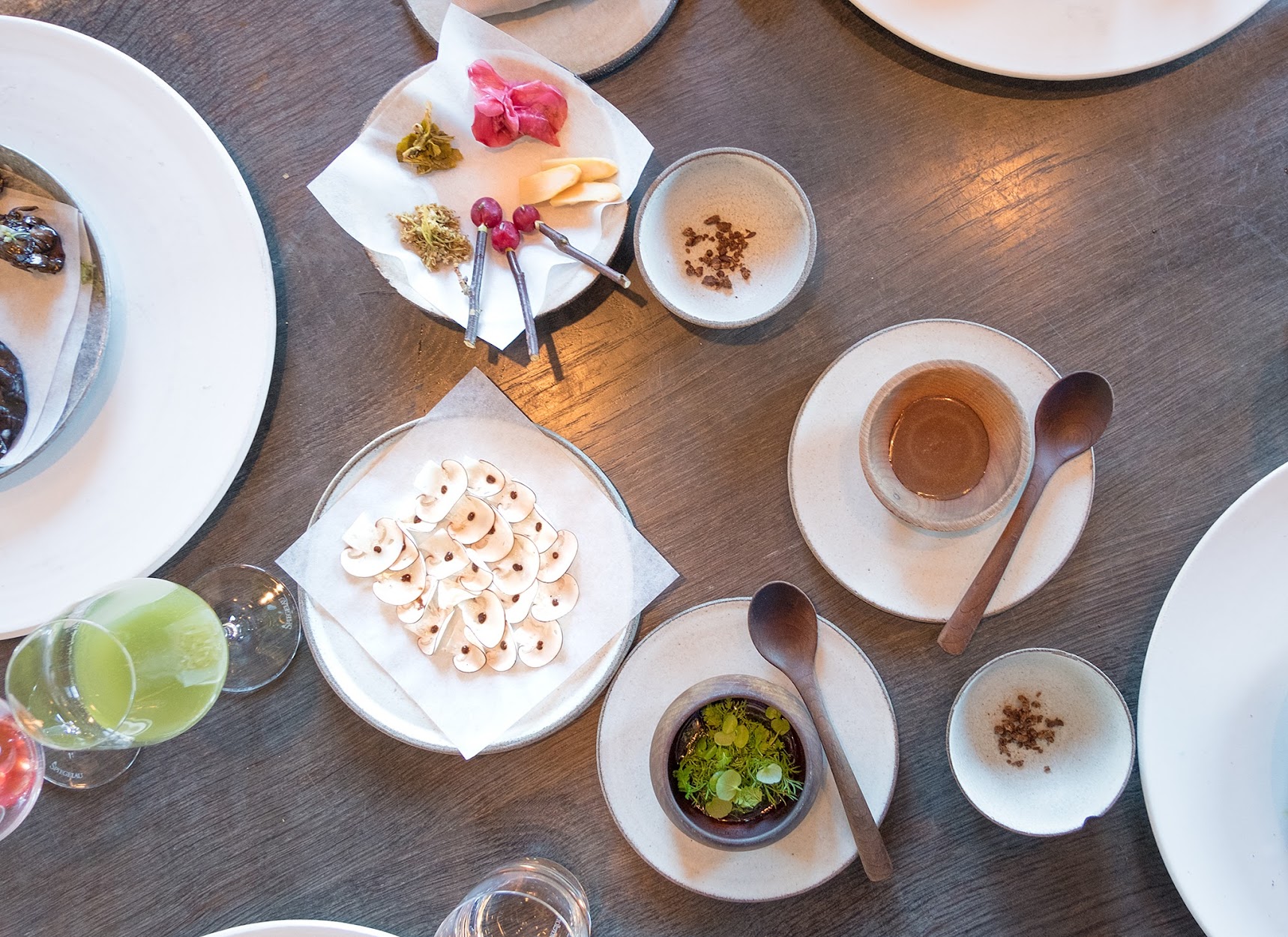 Pickles, kelp salt, reduced vegetable sauce, mushrooms with beef garum
Our final savoury course was, appropriately for us, served family-style – “tacos” of cabbage leaf with fixings on the side. The beef garum should be bottled – it was that good. Lots of acid and salt in the various bites, but little obvious fat. 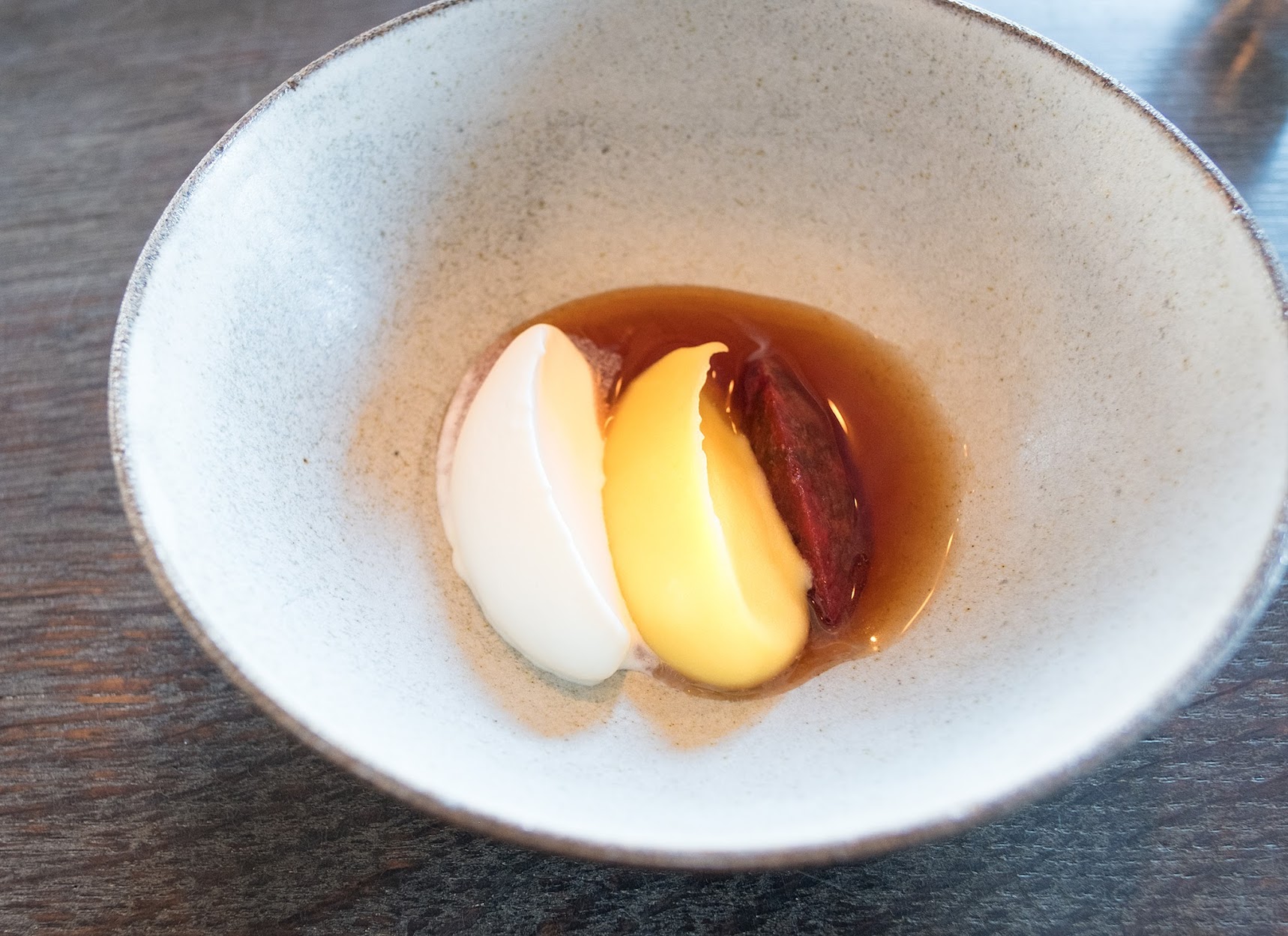 Potato, plum, cream
I’ve had a few potato-based desserts, but this is probably the best of breed – the tuber had such incredible natural sweetness, though not at all like a yam. The airy purée was served with cream and dried plum compote. The trio of quenelles sat in a syrupy, reduced plum juice infused with (plum?) liqueur – overall, a really nice balance of alcohol, resiny sweetness and pure potato flavour. 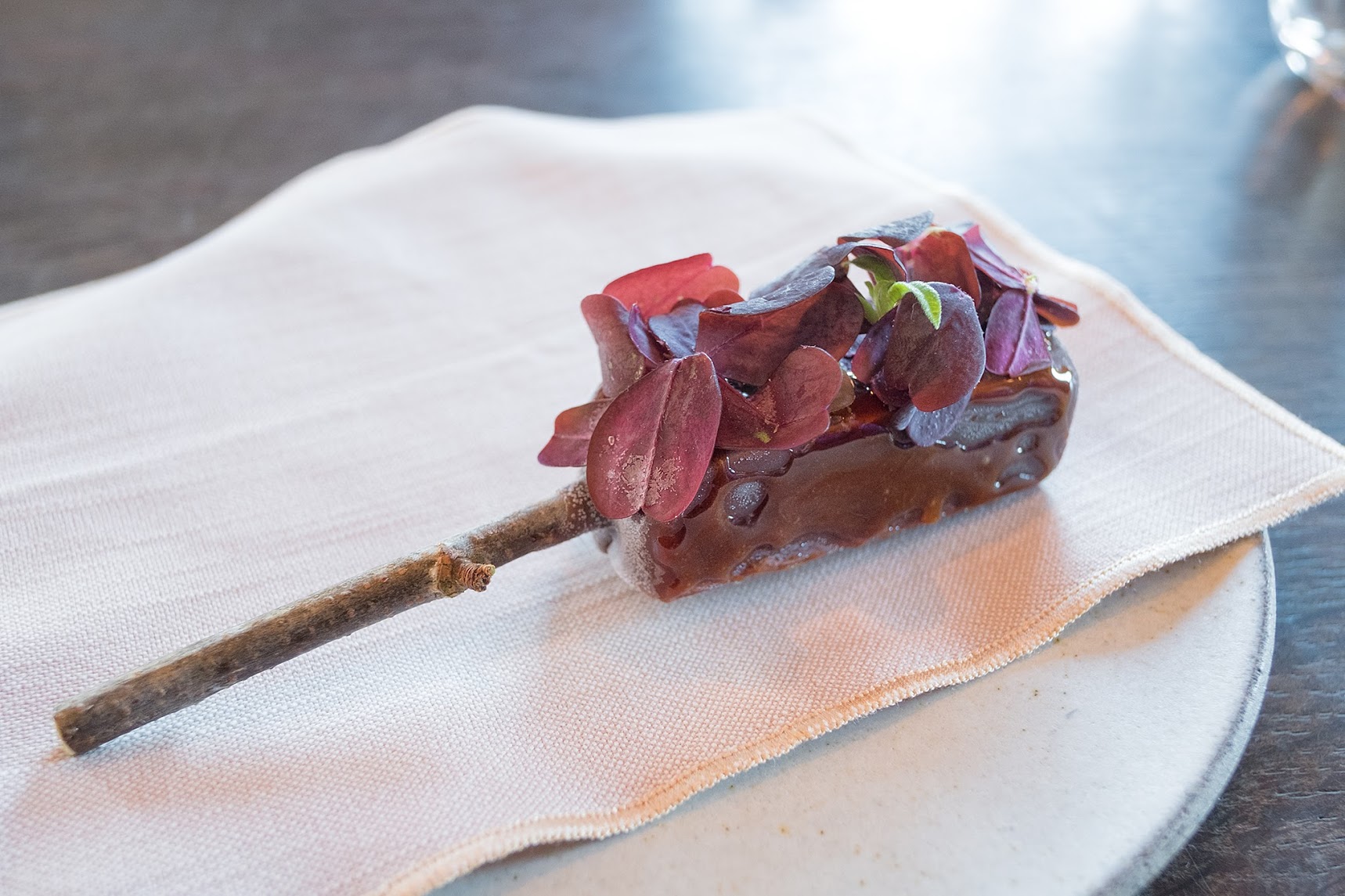 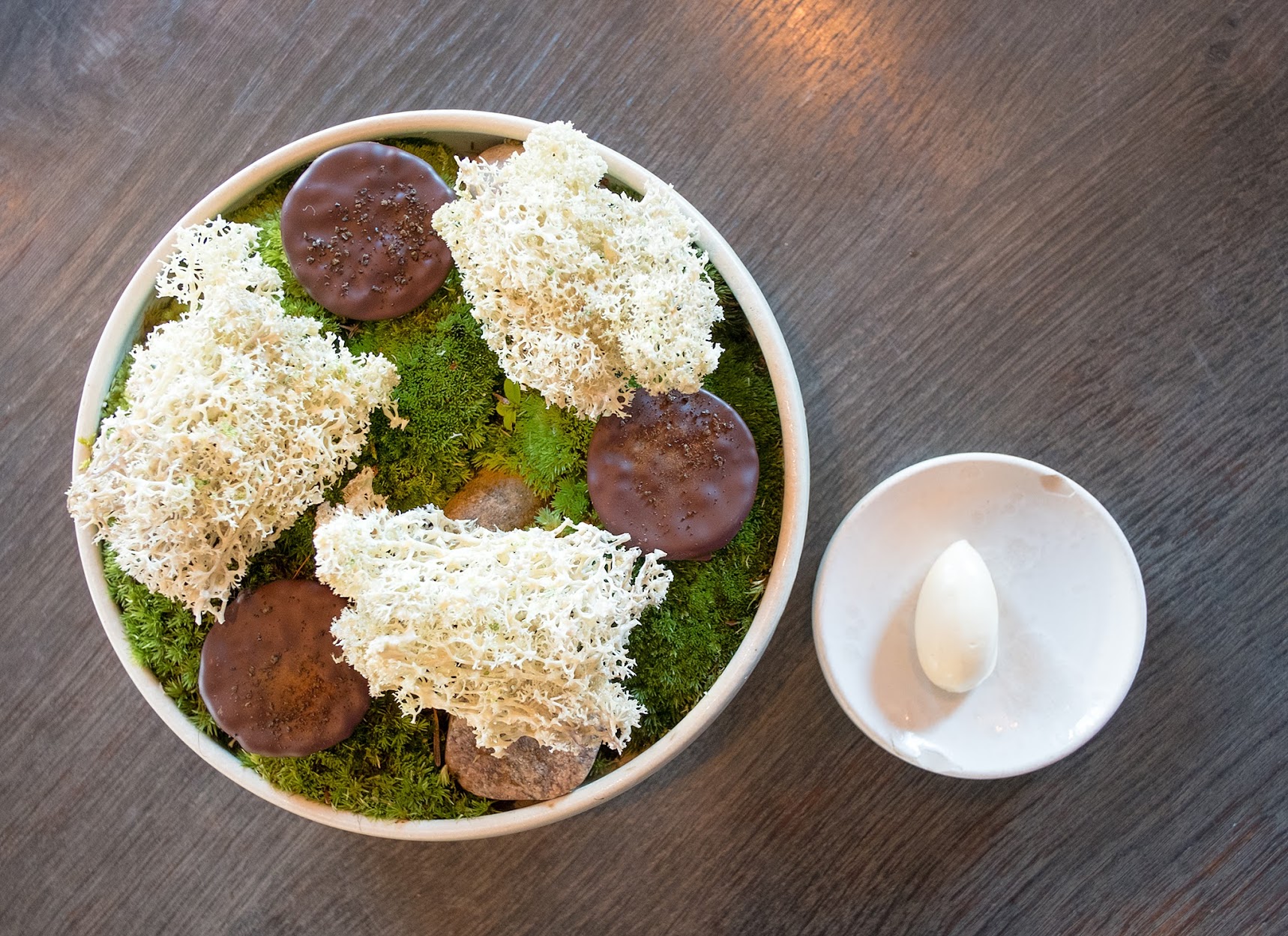 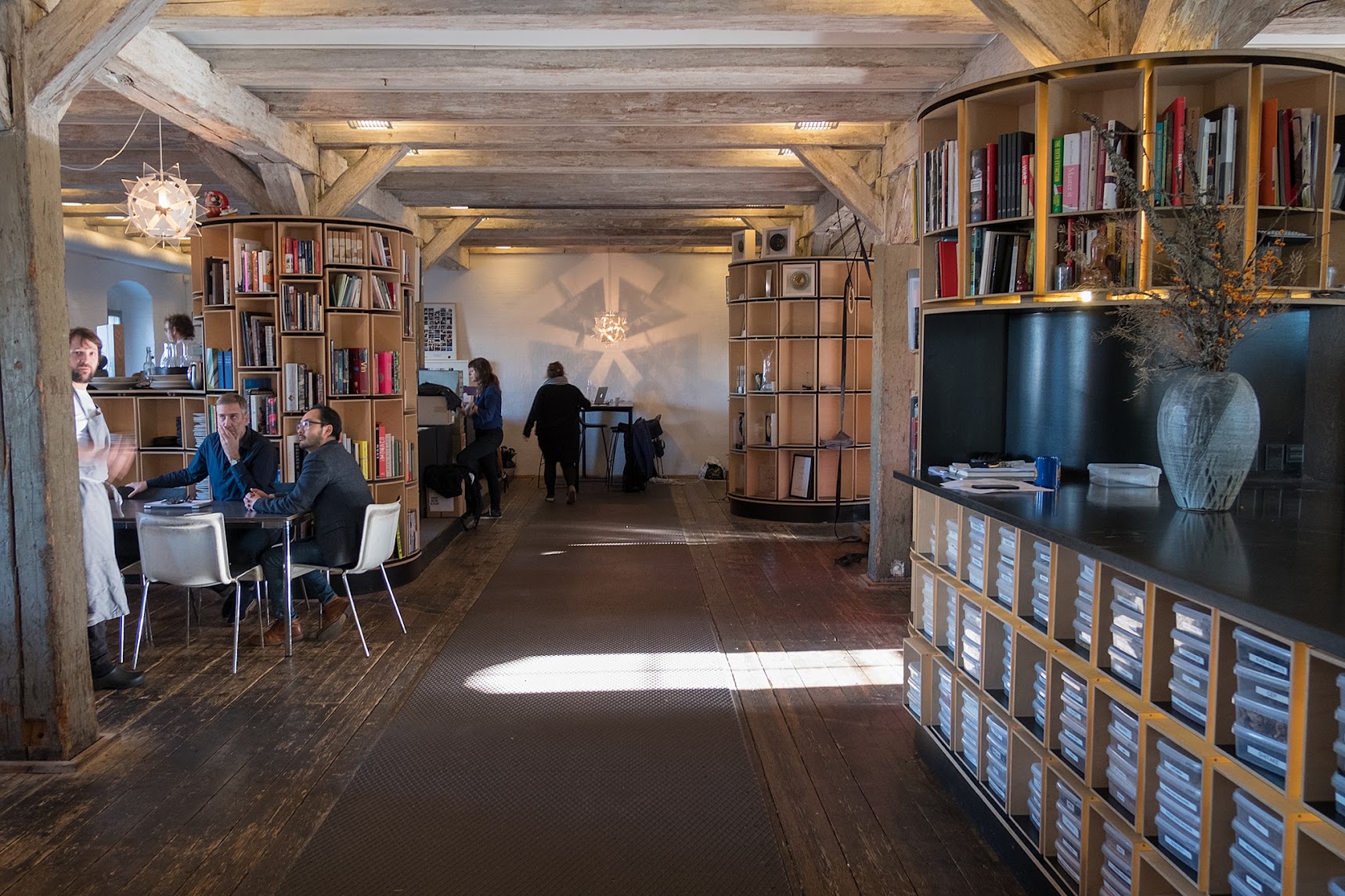 The food was, as anticipated, very good – within my all-time top 20. However, the opportunity to experience the end of noma 1.0 was a unique and unexpected treat – the excitement in the air was clearly palpable. When next we return, it will be to a new noma, in a new space, with (likely) many new faces – but we’ll always have the memories of the building at Strandgade 93.

One thought on “noma”