Our last lunch in Copenhagen was a nearly 4-hour marathon on the eighth floor of a football stadium. If you think this is an odd setting for Denmark’s sole 3-star restaurant, I would argue that you have not enjoyed the beautiful views at Rasmus Kofoed and Søren Ledet’s Geranium. Kofoed himself was present and busy the entire time – cooking, plating, directing, serving. Our menu was “The Winter Universe” – a collection of his signature and seasonal dishes. 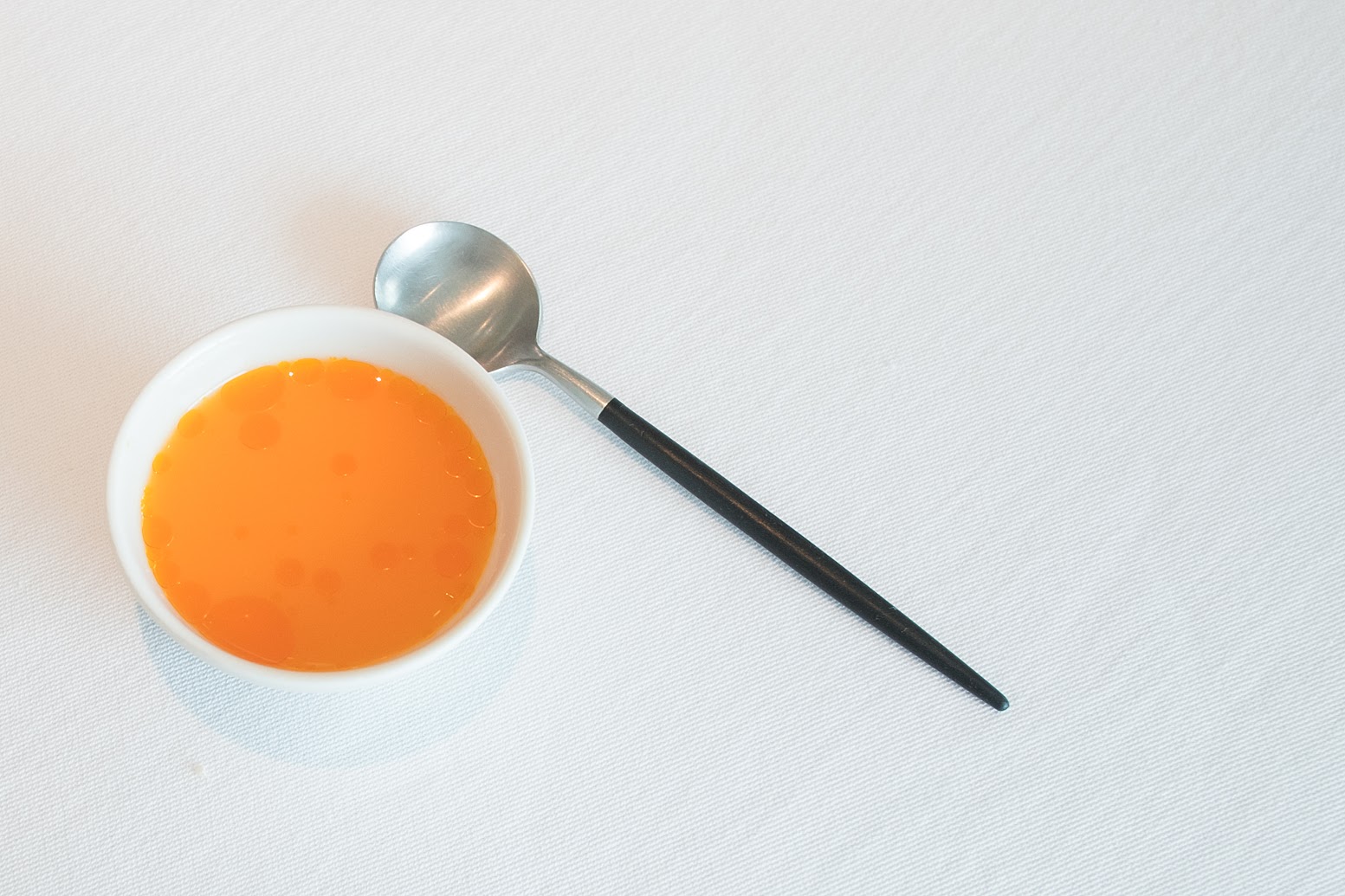 Lobster, milk, fermented carrot, sea buckthorn
Not what I expected when the bowl was laid down – the combination of a milk custard with acidic carrot and sea buckthorn juice was really magical. The whole was definitely was more than the sum of its parts here. 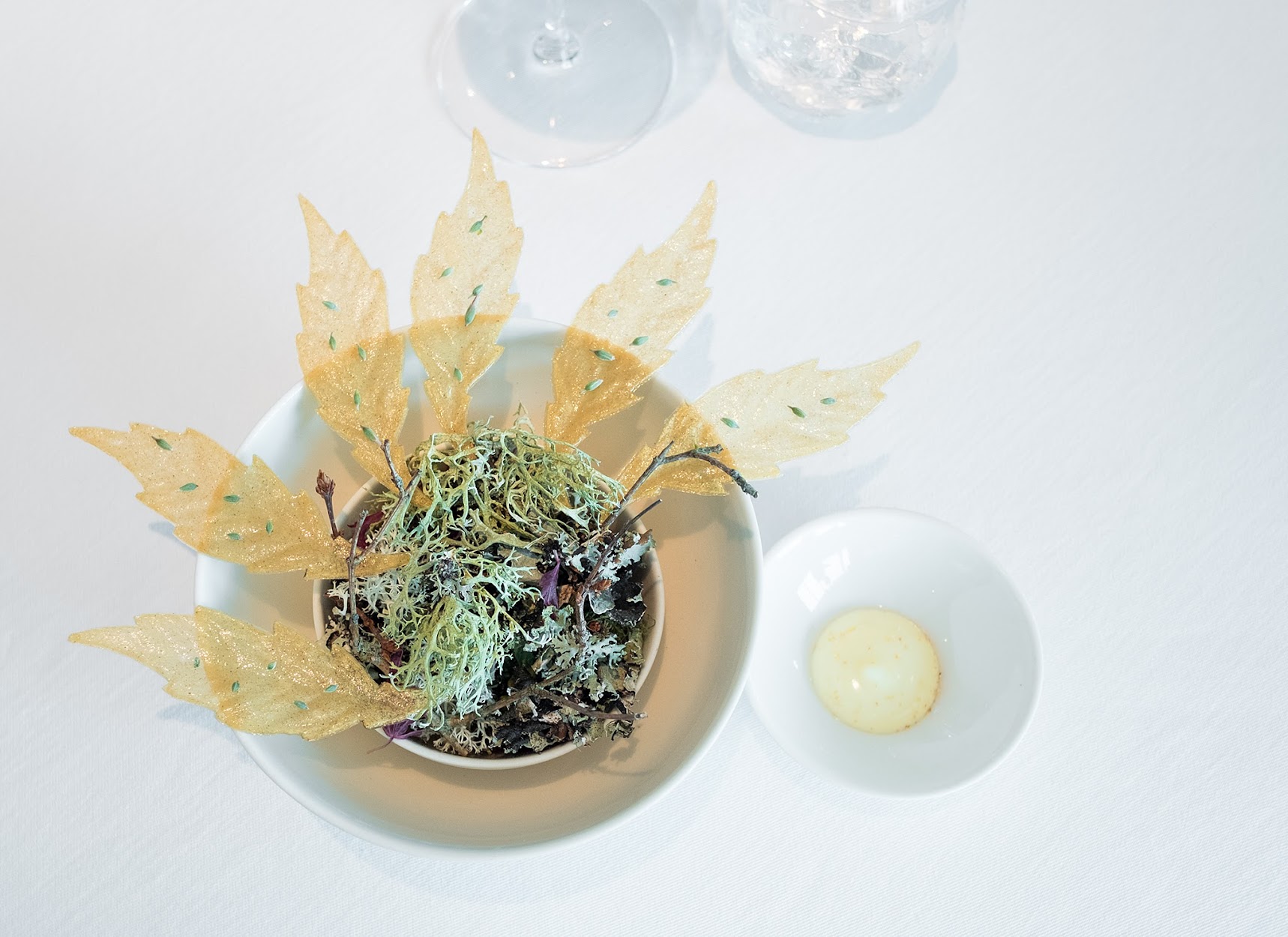 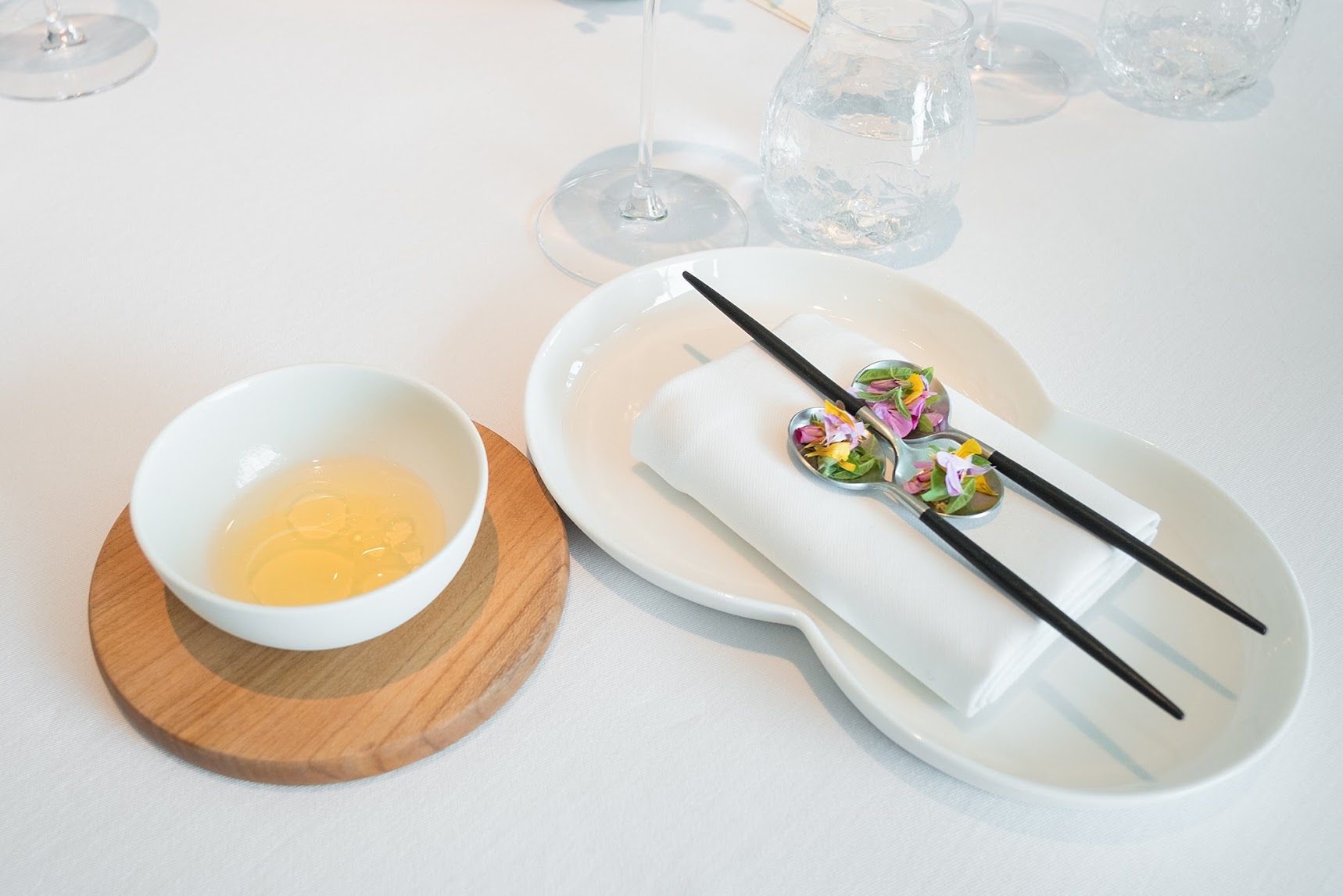 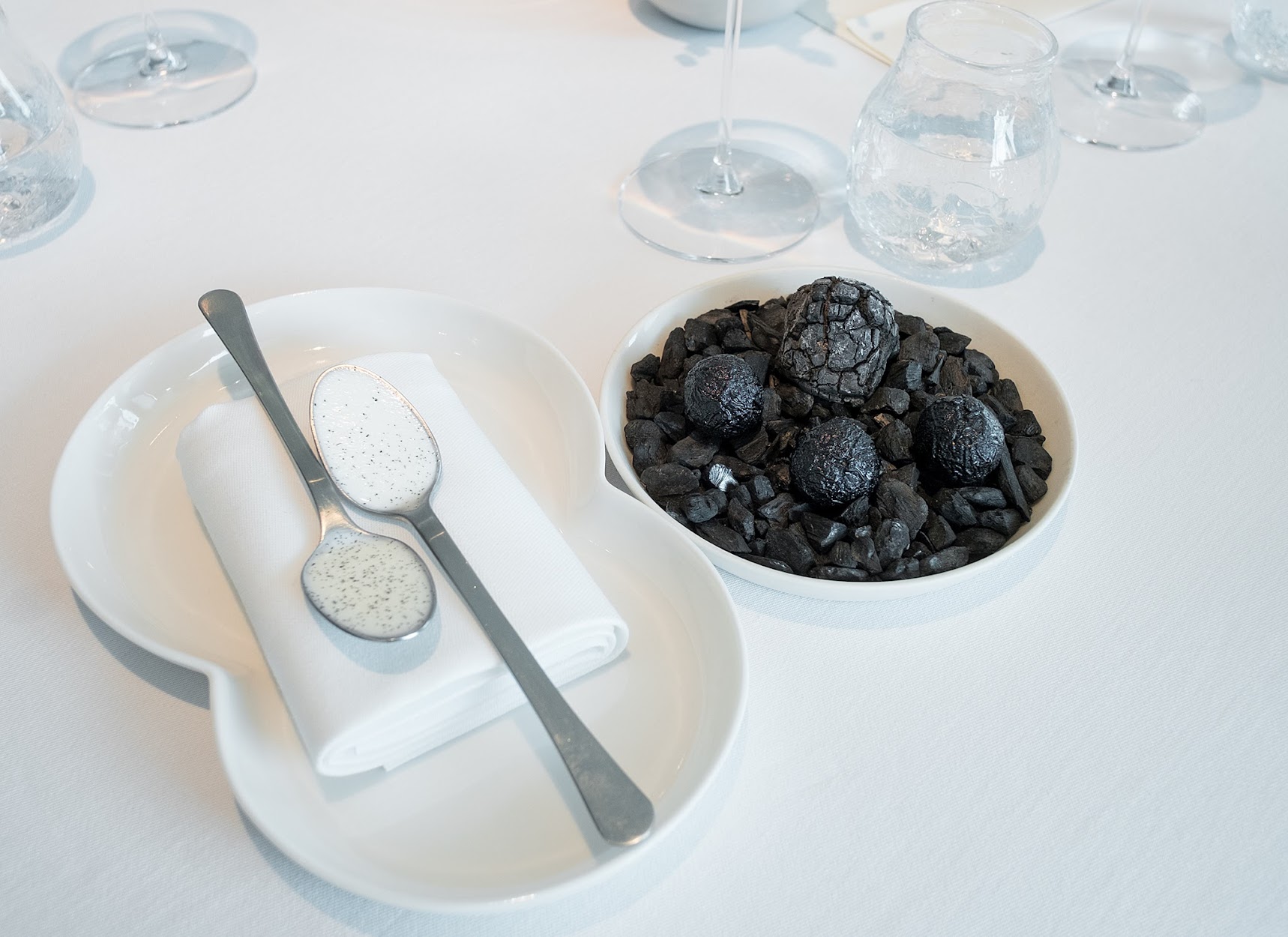 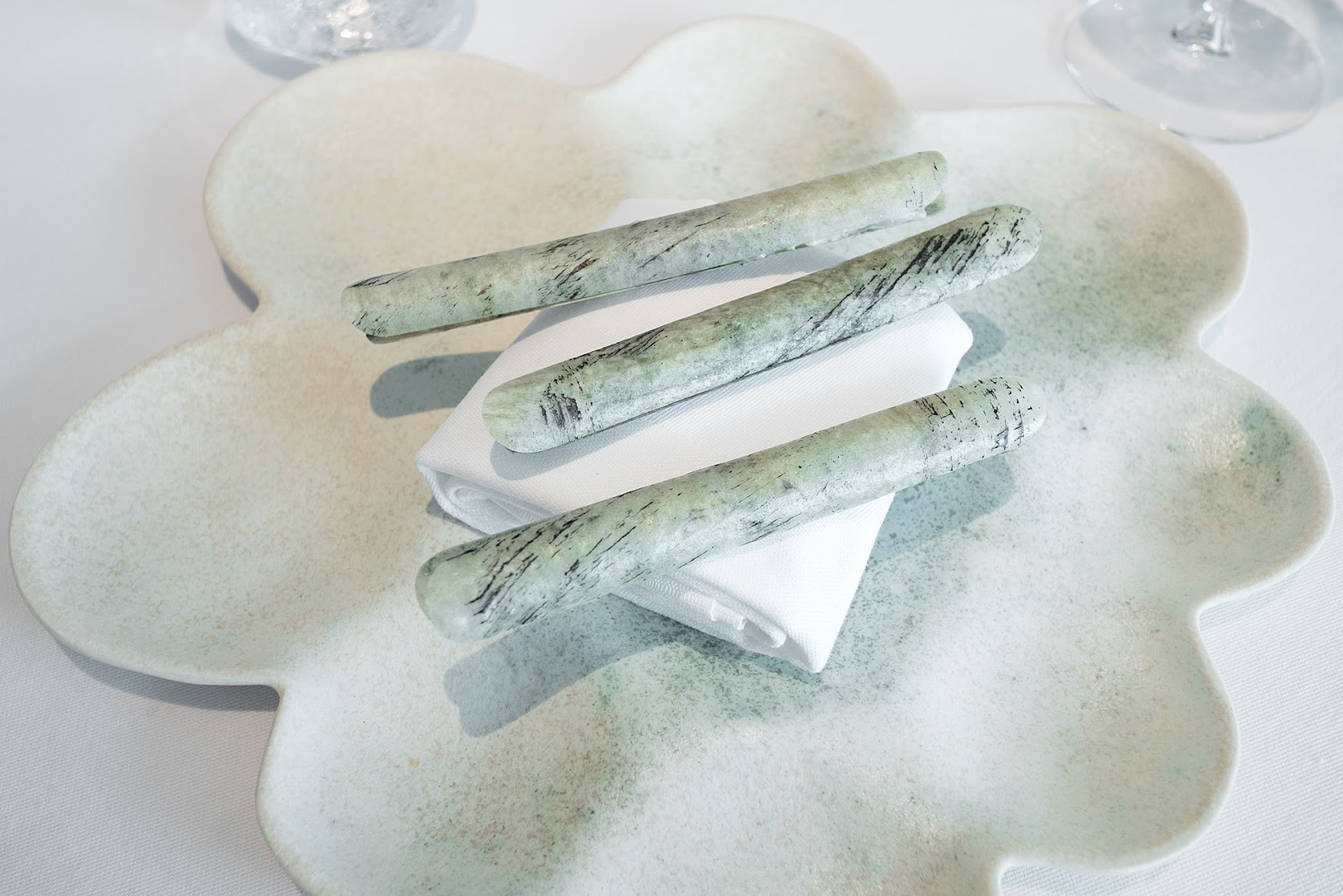 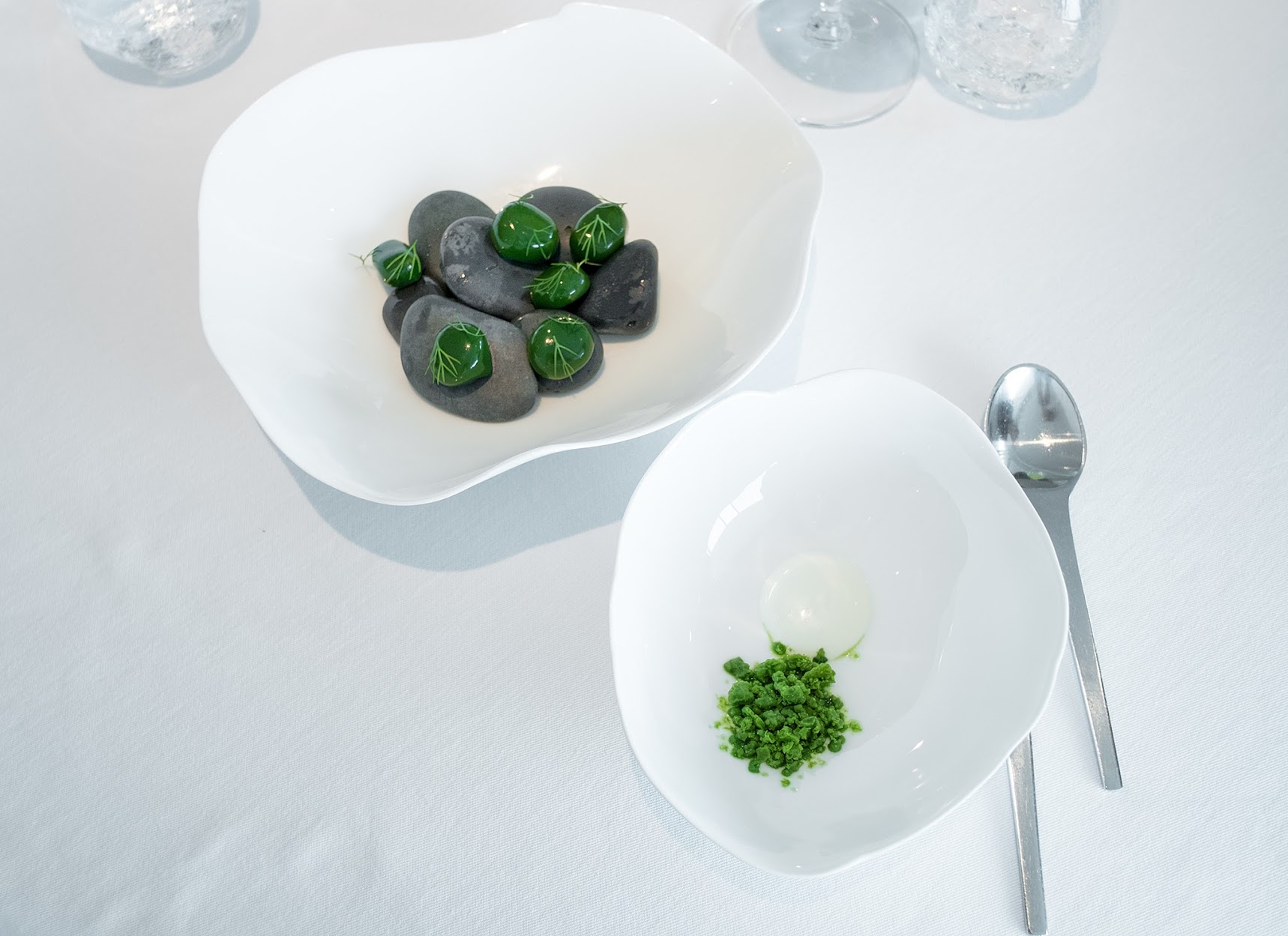 “Dillstone” trout
Horseradish cream, dill, cucumber
Chunks of trout were masterfully glazed with a shiny dill sauce. We dragged the stones through the cream, and picked up a granita of pickled dill and cucumber juice along the way. Vegetal, piquant, rich, acidic – excellent. 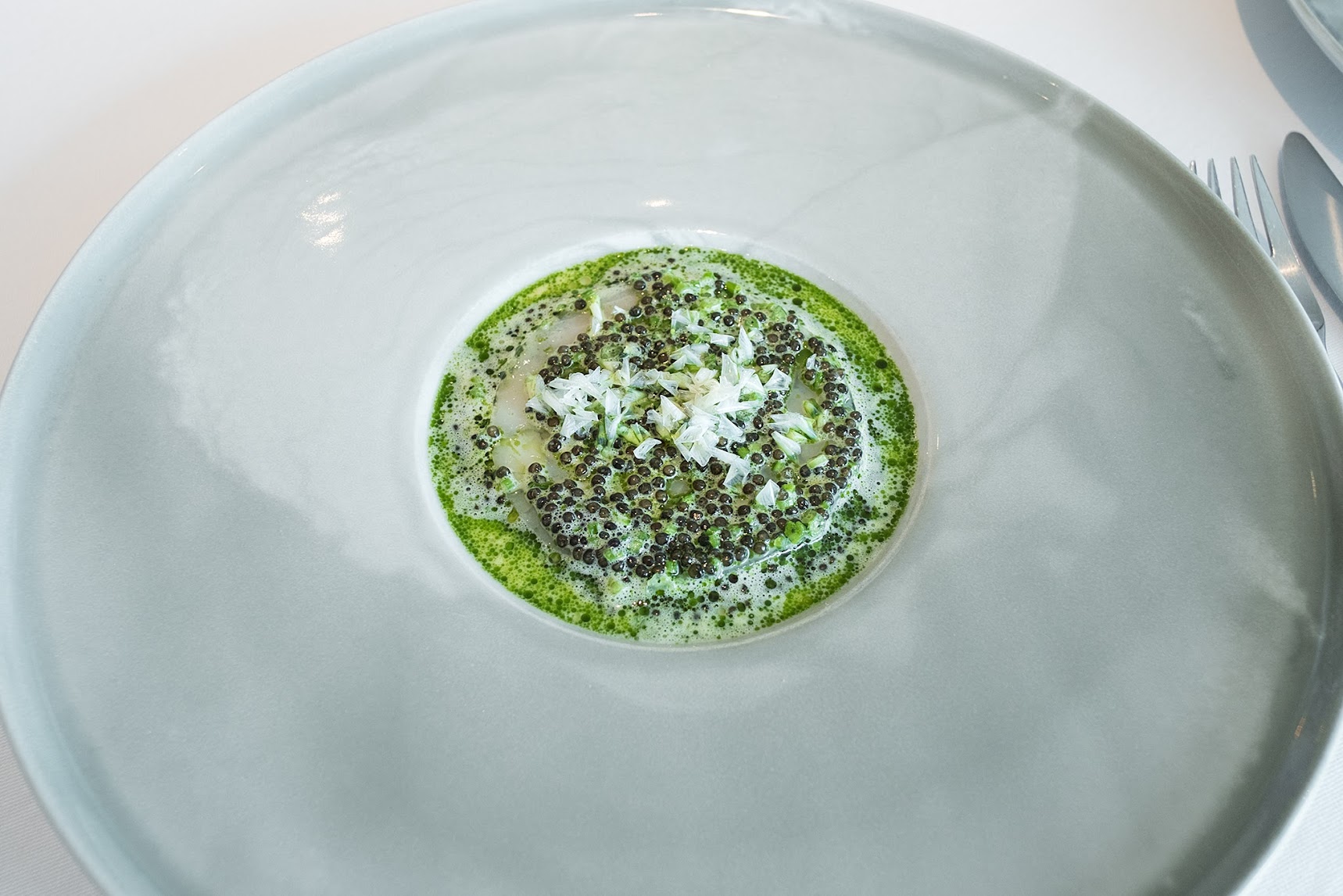 Salted hake
Finnish caviar, parsley stems, buttermilk, crispy fish scales
My dish of the day. The fish had been rolled in parsley ash and flattened out on the plate, giving it the appearance of marble. Over the top, a sauce of buttermilk and parsley oil was poured, then finished with caviar and scales. This had everything – I’m not sure if it’s one of Geranium’s signatures, but it deserves to be. 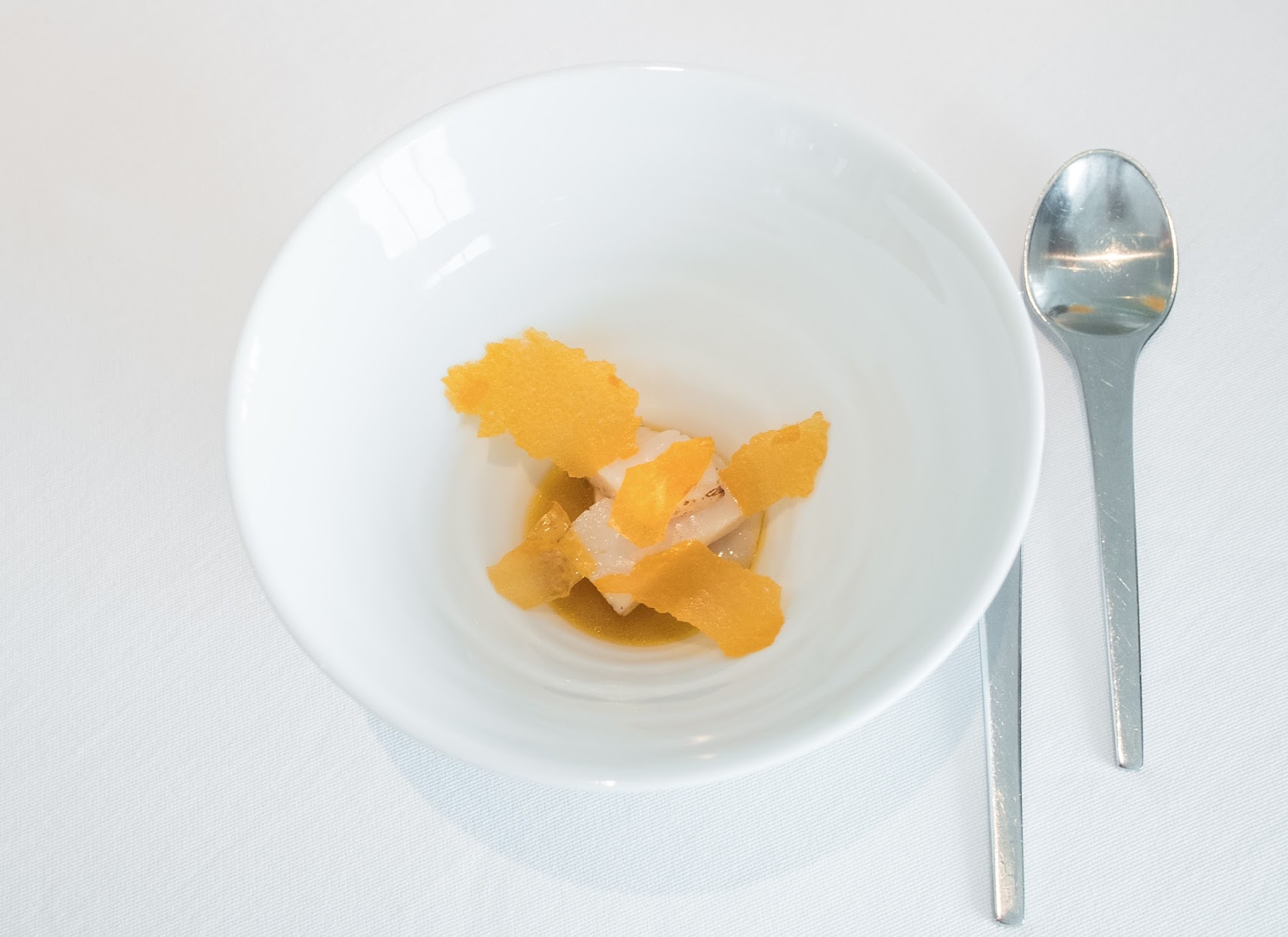 Tromsø scallop
Scallop roe, brown butter, reduction of Filippa apple
Another in a long line of excellent scallop dishes we enjoyed on this trip – the quality of Norwegian shellfish is really impressive. The shards of fried, dehydrated scallop roe were an interesting element here. 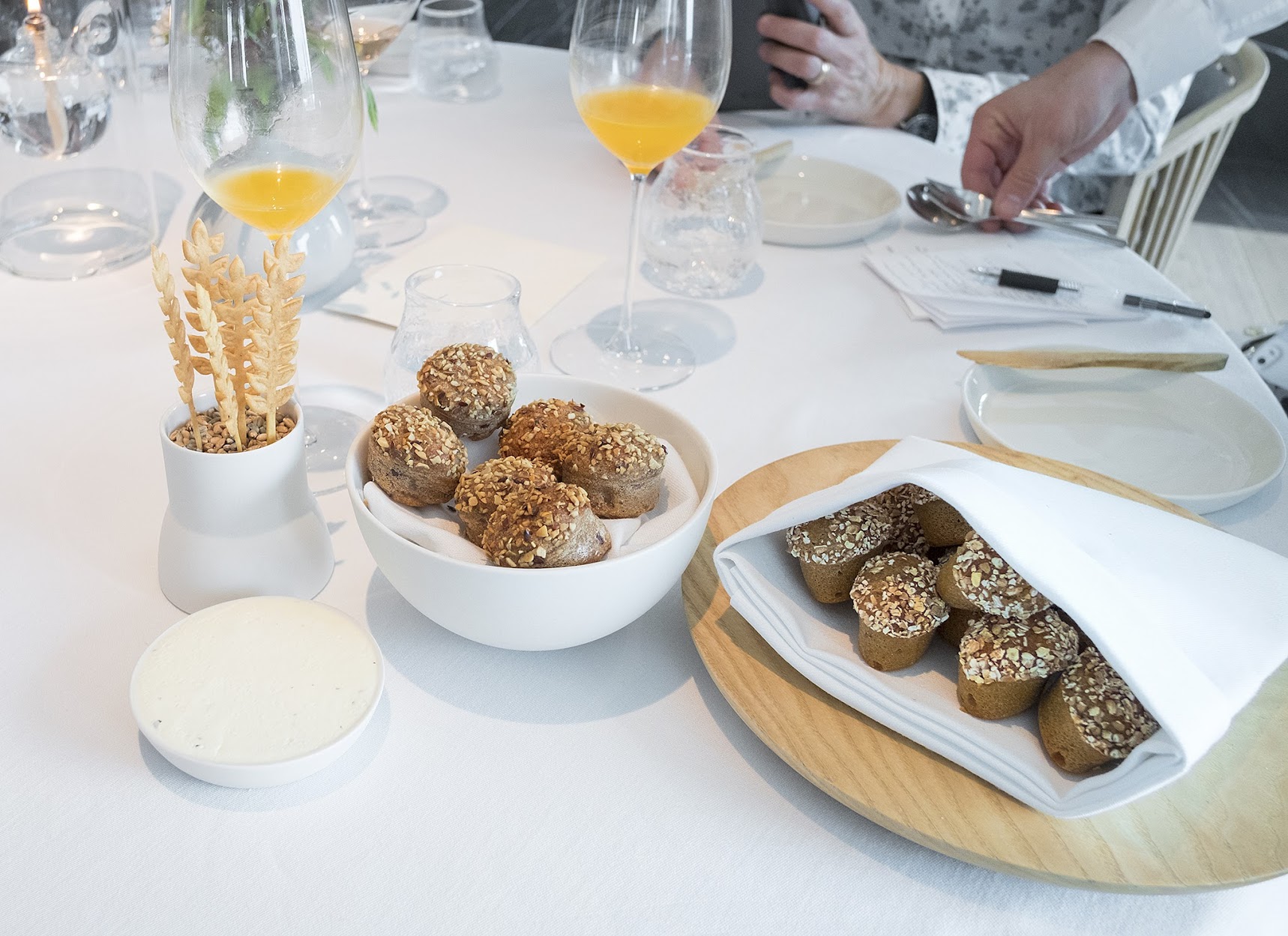 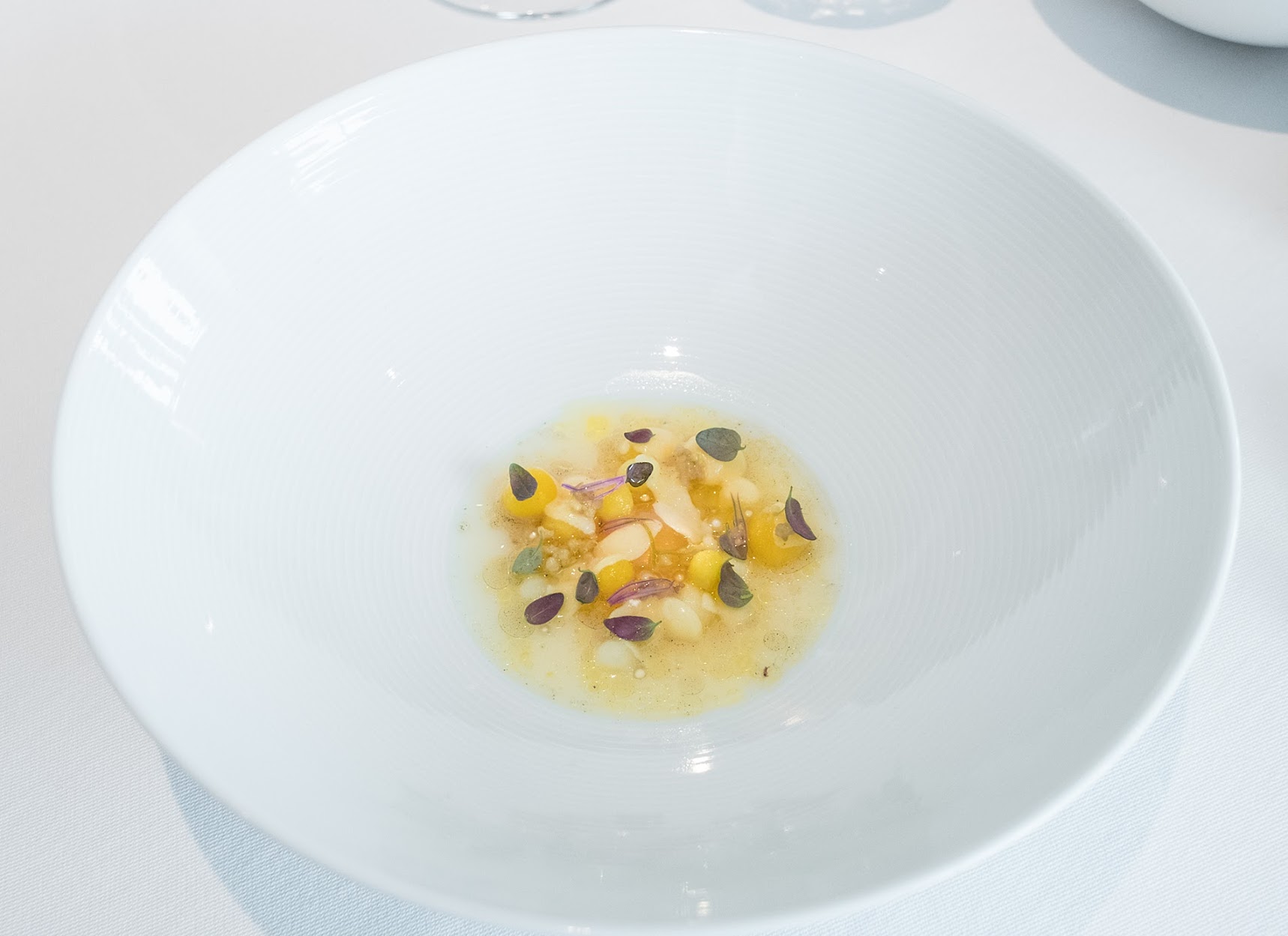 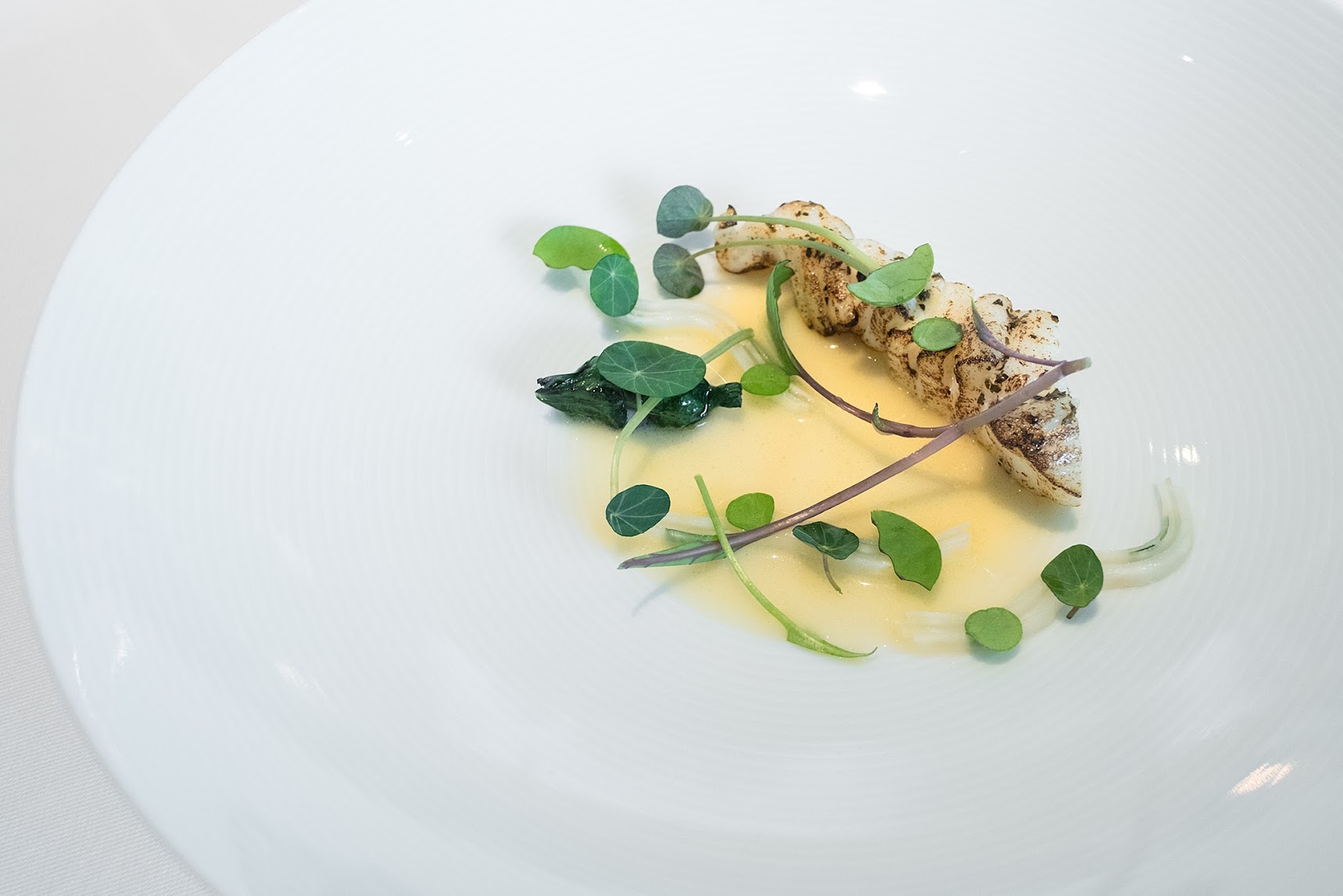 Lightly-salted turbot
Celeriac, pine, aromatic stems, baby cabbage
One of the best-cooked turbot I’ve had anywhere. The seared fish was served with a jus of grilled celeriac and pickled pine – it had an acidity that was very enticing. 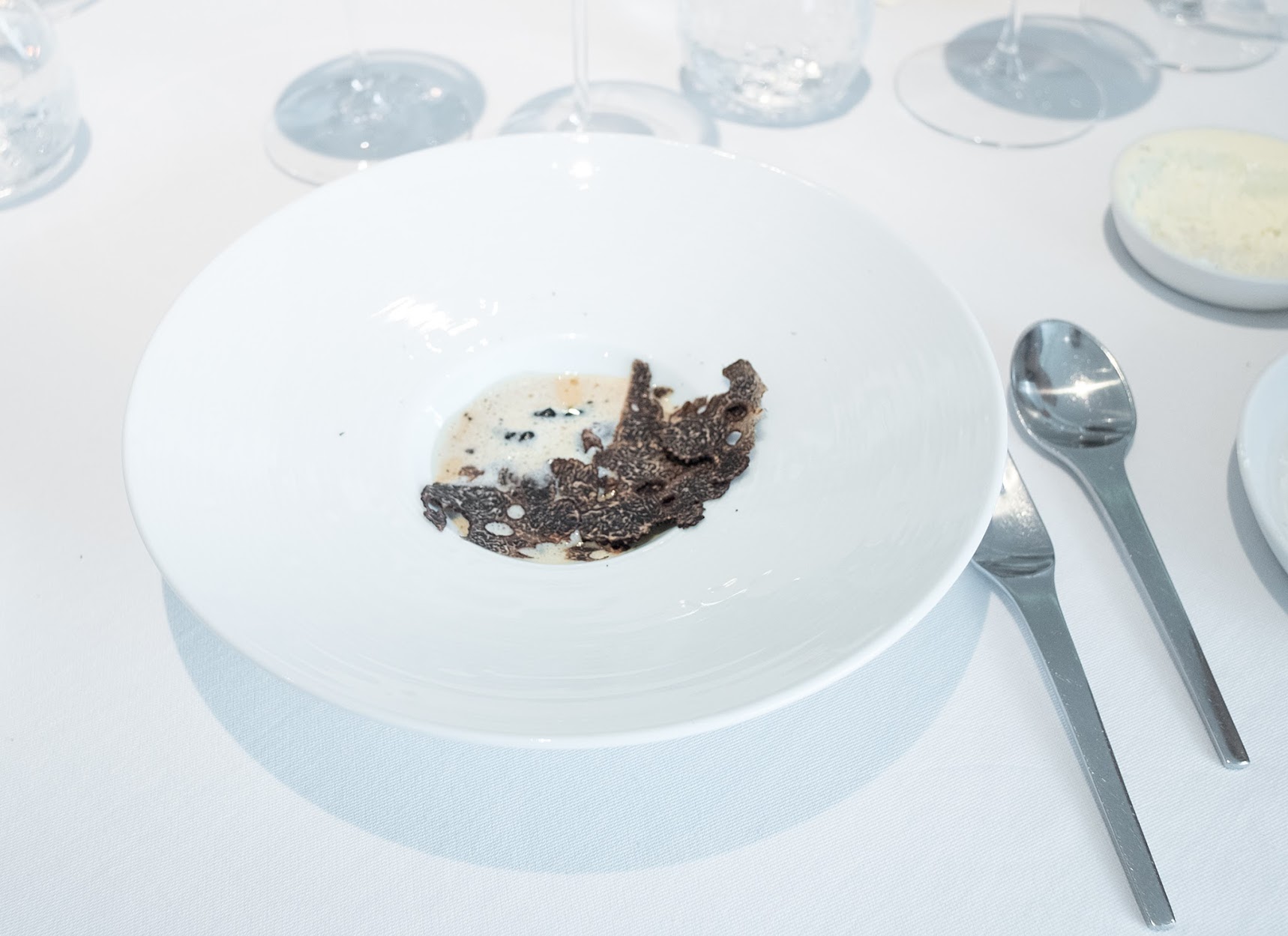 Walnuts, cep mushroom, black truffle
Little nuggets of black gold were in fact walnuts coated in a gelatinous black truffle puree. The soup of ceps was fortified with dark beer, making this a really hearty dish – a surprising contrast to all the earlier courses. Thick pieces of Italian black truffle were shaved tableside – the kitchen’s generosity on full display. 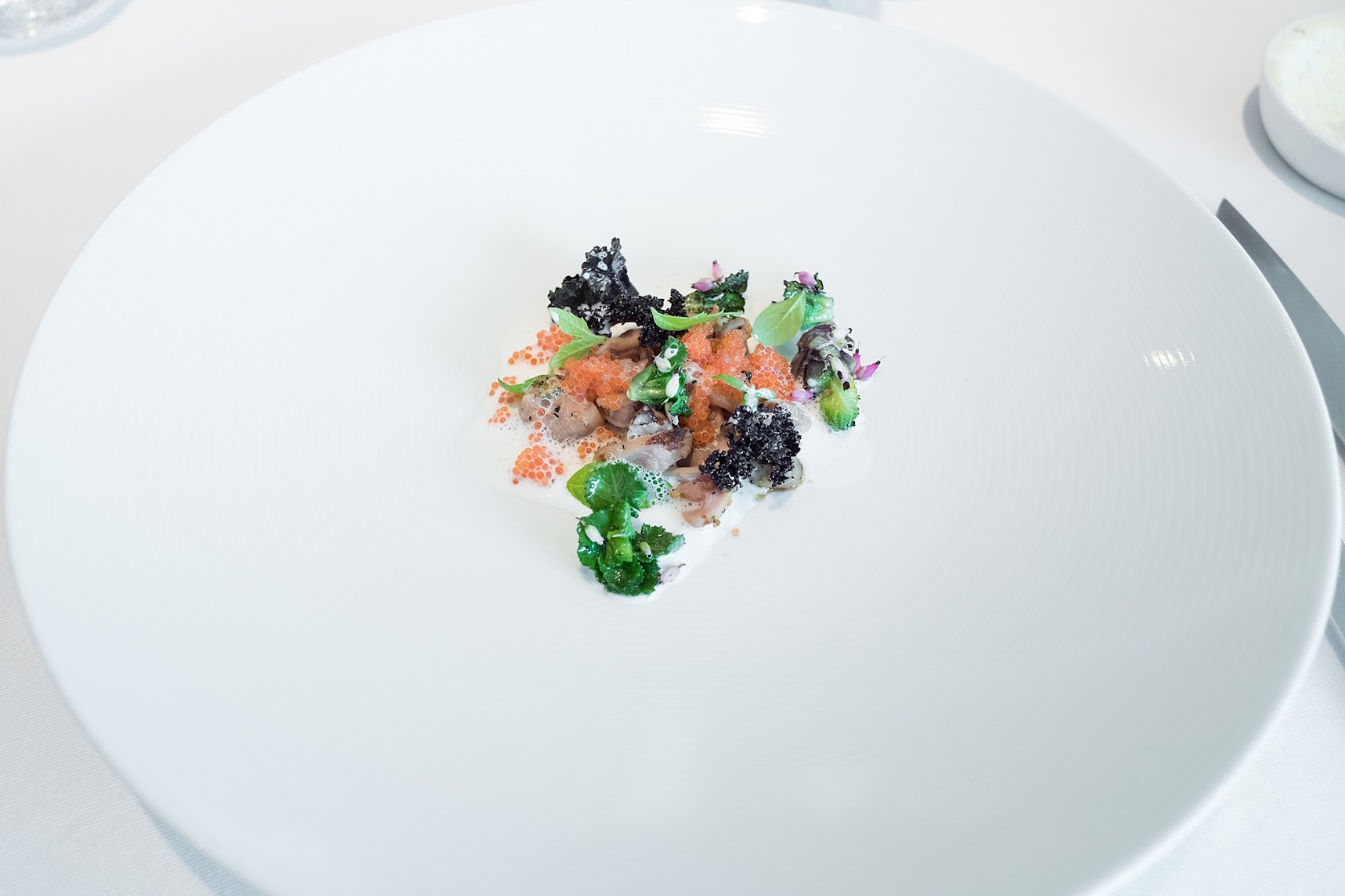 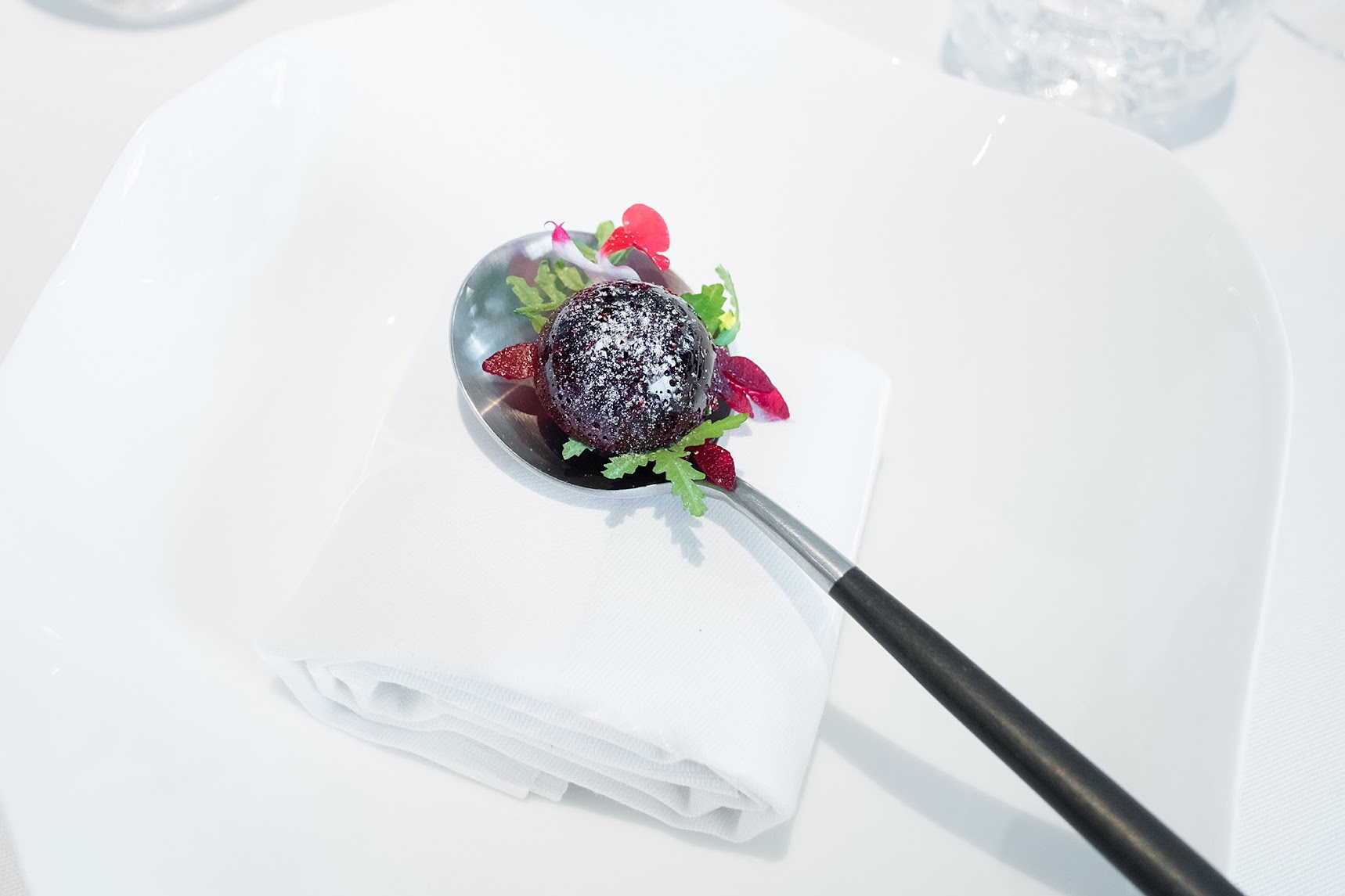 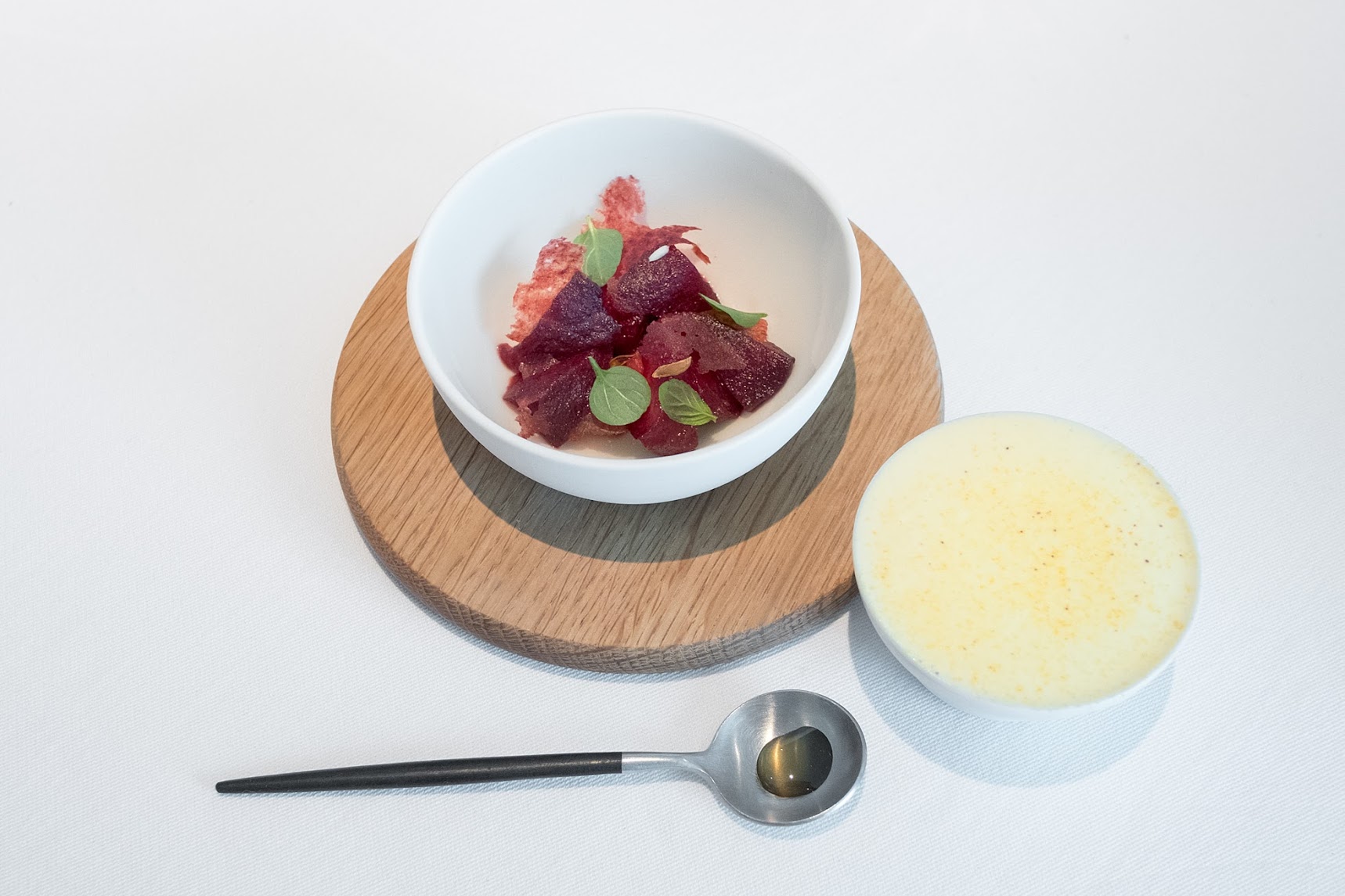 Beeswax ice cream, dried apples, black honey
I had resigned myself to another beet dessert, but was pleasantly surprised by the red wedges, which were dried apples rehydrated in elderberry juice. They paired wonderfully with the earthy (almost malty) ice cream.  The pure black honey in the spoon is purportedly quite rare – we were told that the last time it was harvested was a number of years ago. I am no expert and can only say that it was delicious – even more so together with the other components. 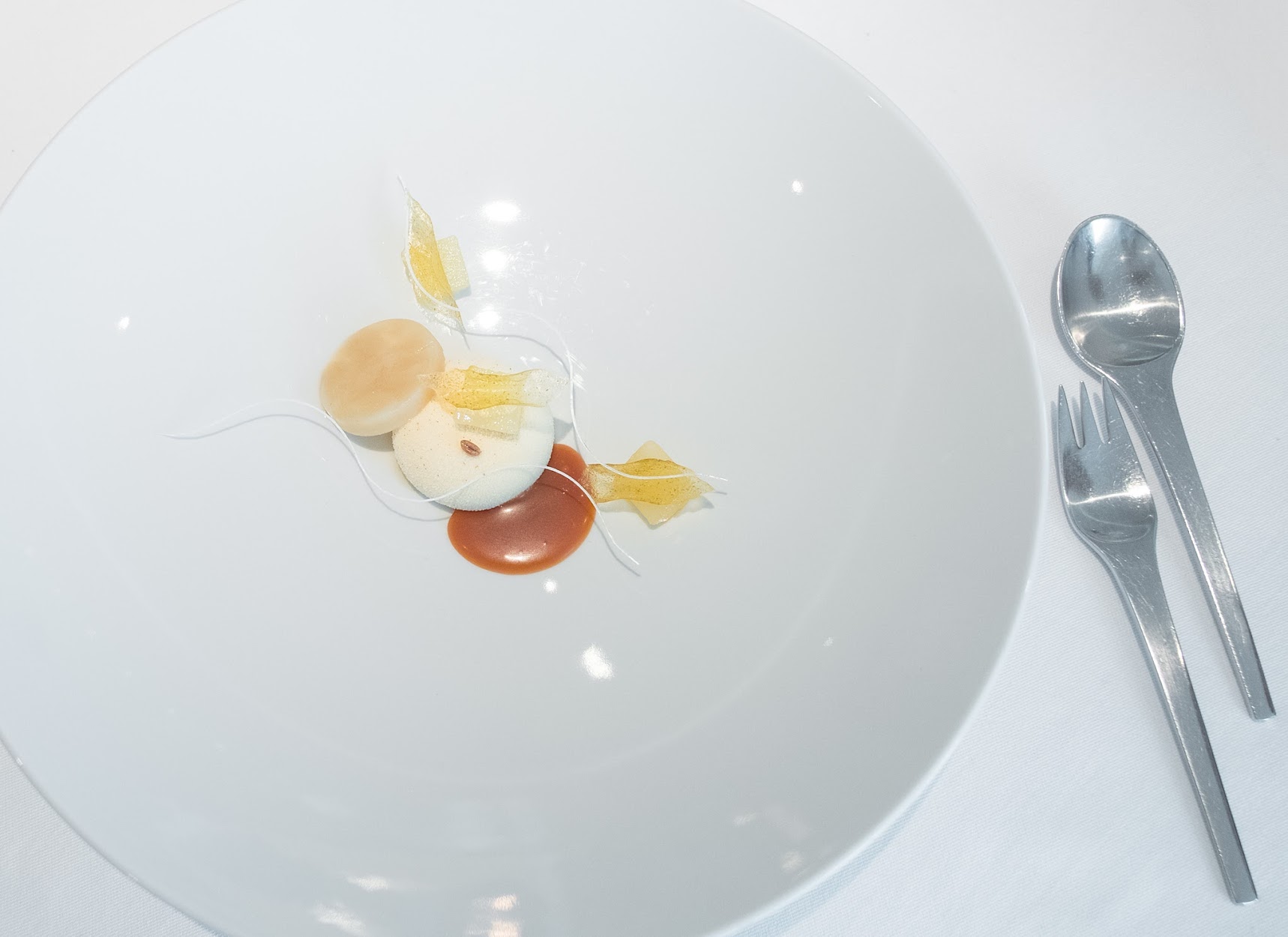 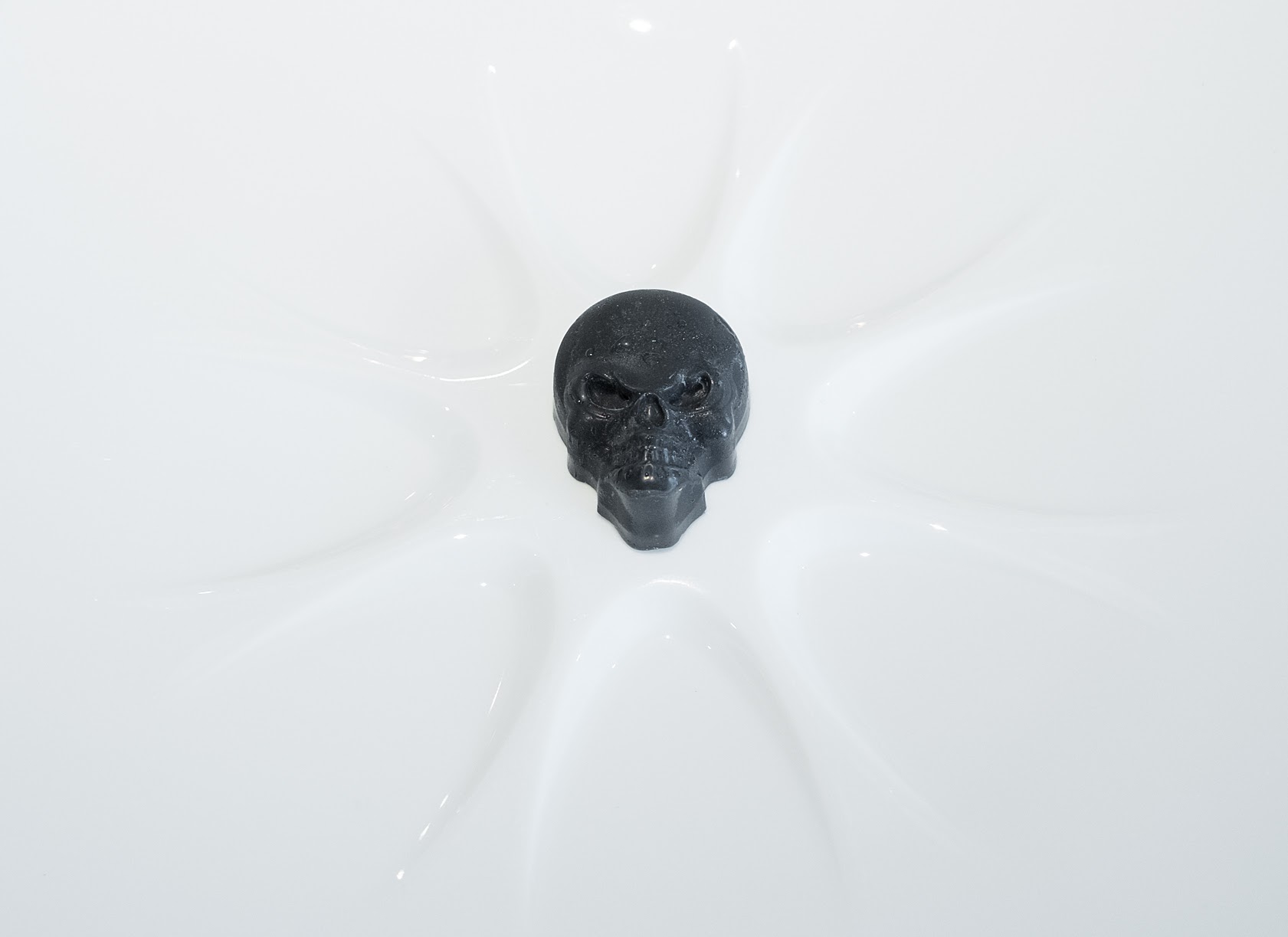 “The End”
Skål (cheers)! The desserts concluded with a play on words – a charcoal-painted coconut butter skull filled with licorice mousse. Proof that even in this sleek and sophisticated setting, there’s room for a quirky sense of humour. 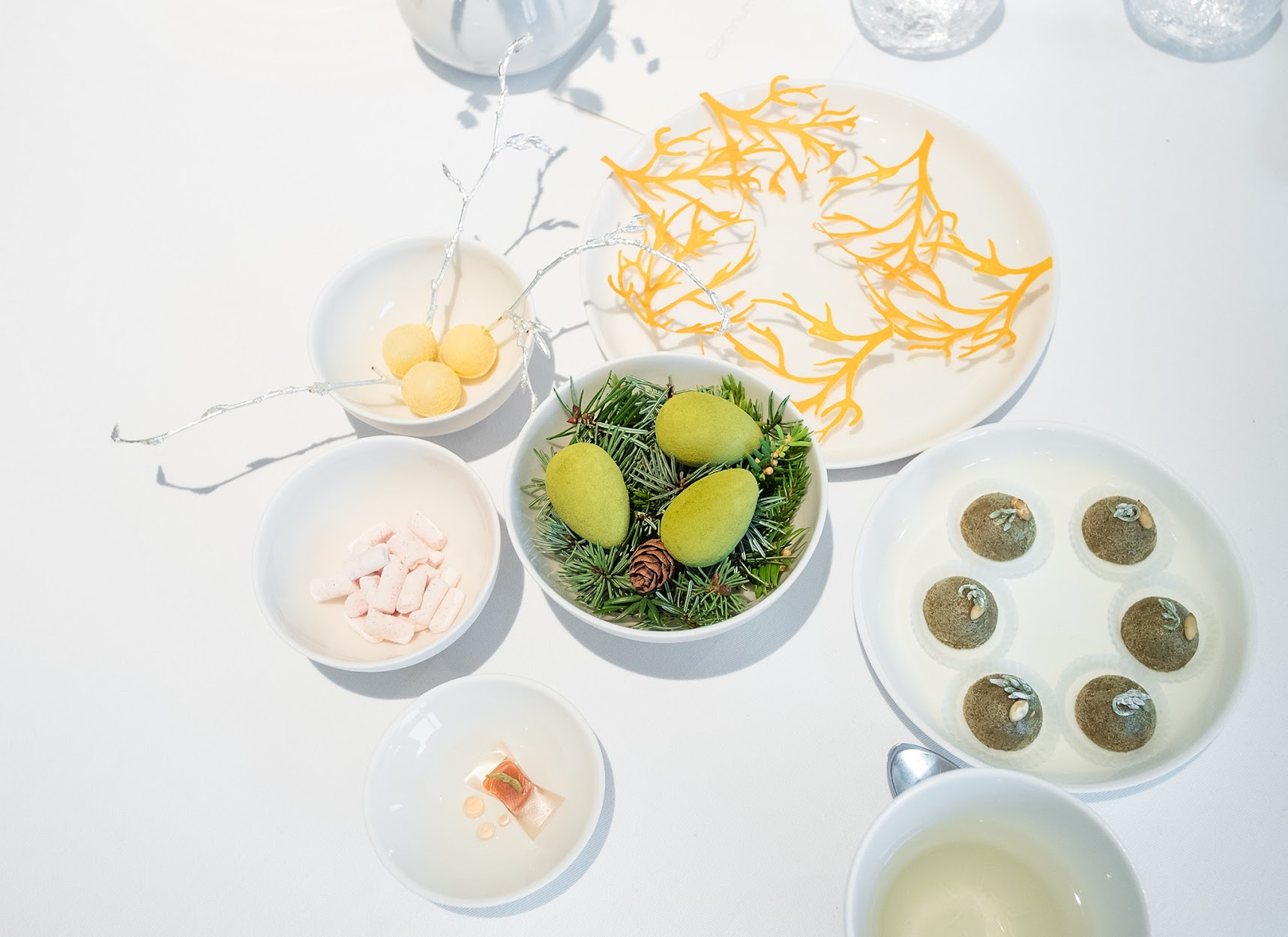 I haven’t eaten a meal showcasing such high and consistent technical proficiency in a long time – perhaps one should expect no less from a team helmed by the winner of Bocuse d’Or bronze, silver and gold medals. It was a true pleasure reveling in the kitchen’s mastery, and Rasmus is a friendly guy to boot! I wouldn’t hesitate to bring someone here, and would love to return myself – perhaps to try the more experimental Inspirational Kitchen in the future.