I won’t lie – I had planned a single night in Oslo around a dinner at Maaemo. Unfortunately, after I’d booked our flights and hotel, the restaurant announced it was going to close on Tuesdays from 2017 – talk about disappointing! Anders Husa suggested we visit Bokbacka instead, and so we followed his advice to quite an enjoyable evening. 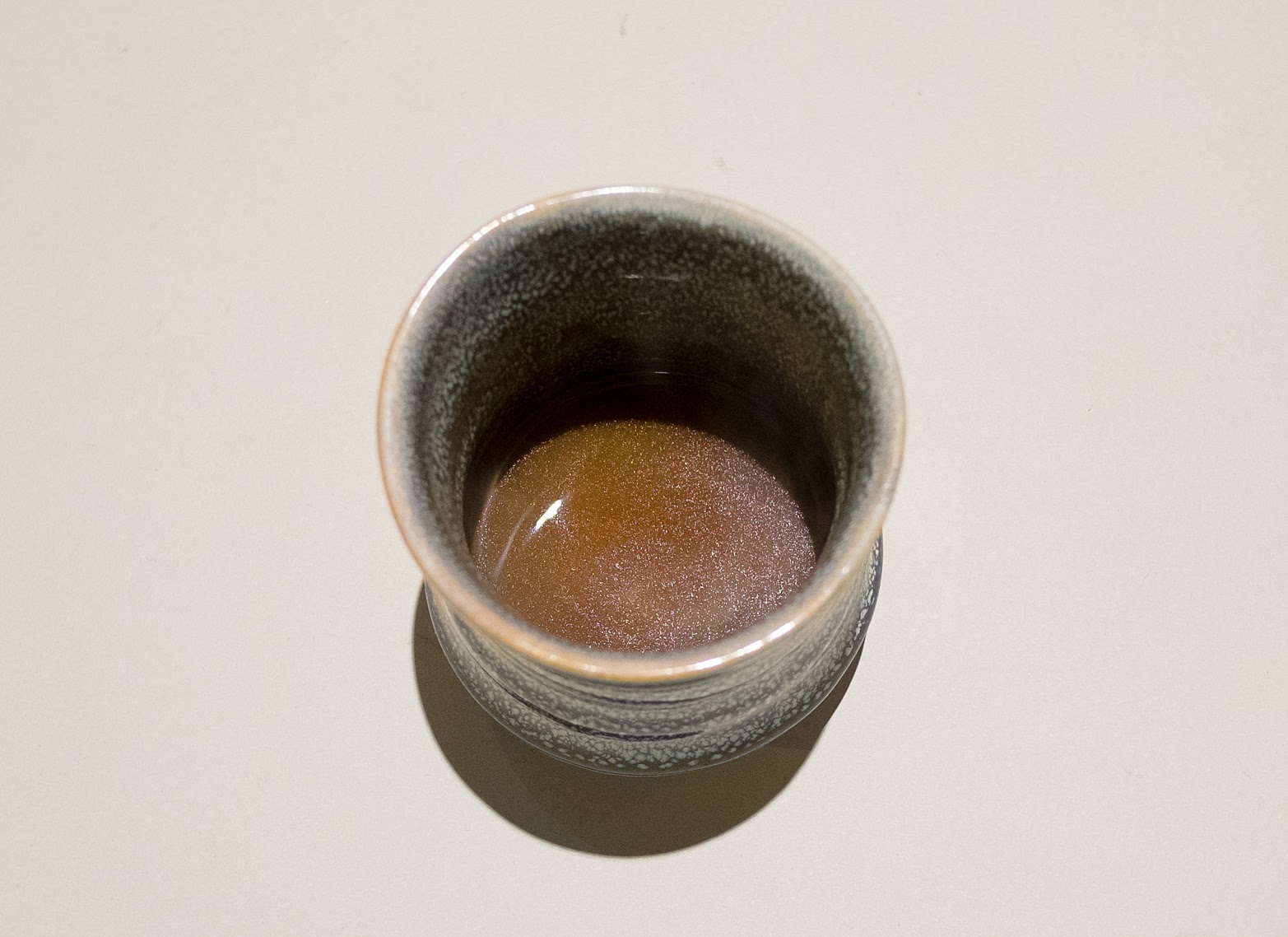 Langoustine broth
Served shortly after we were seated, this was a welcome respite from the weather outside – warm and salty, with a touch of spiciness. 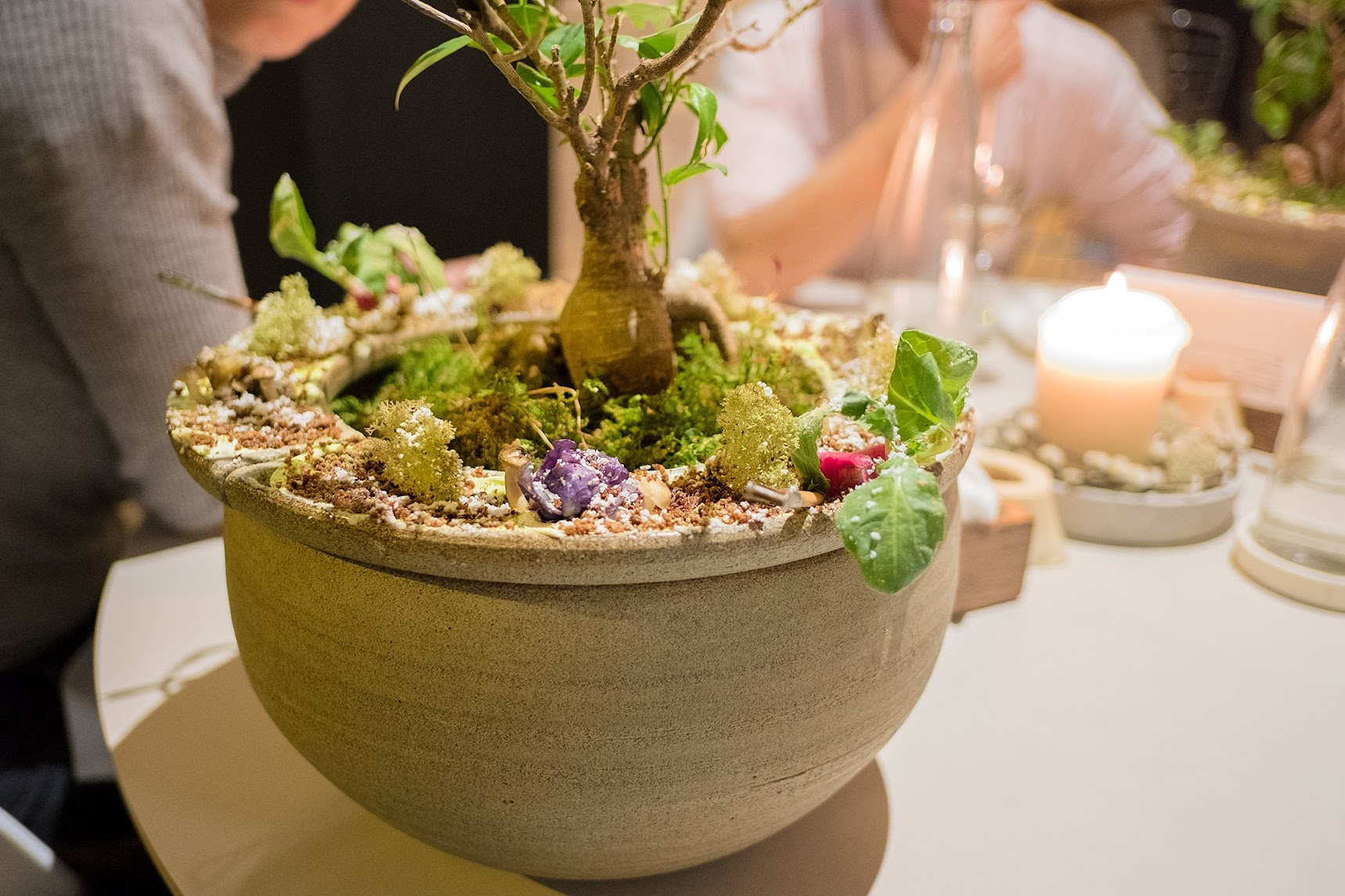 “The Tree”
My understanding is that this course is something of a signature, harkening back to the chef’s childhood on the namesake Bokbacka farm in Sweden. The rim of the pot featured a shallow trough filled with onion cream cheese and a soil of butter-roasted rye breadcrumbs. Strewn along the surface were baby radishes, purple brussel sprouts, fried white lichen, dried sunchokes and shimeji mushrooms – certainly a beautiful (and rather substantial) way of presenting the season’s bounty. 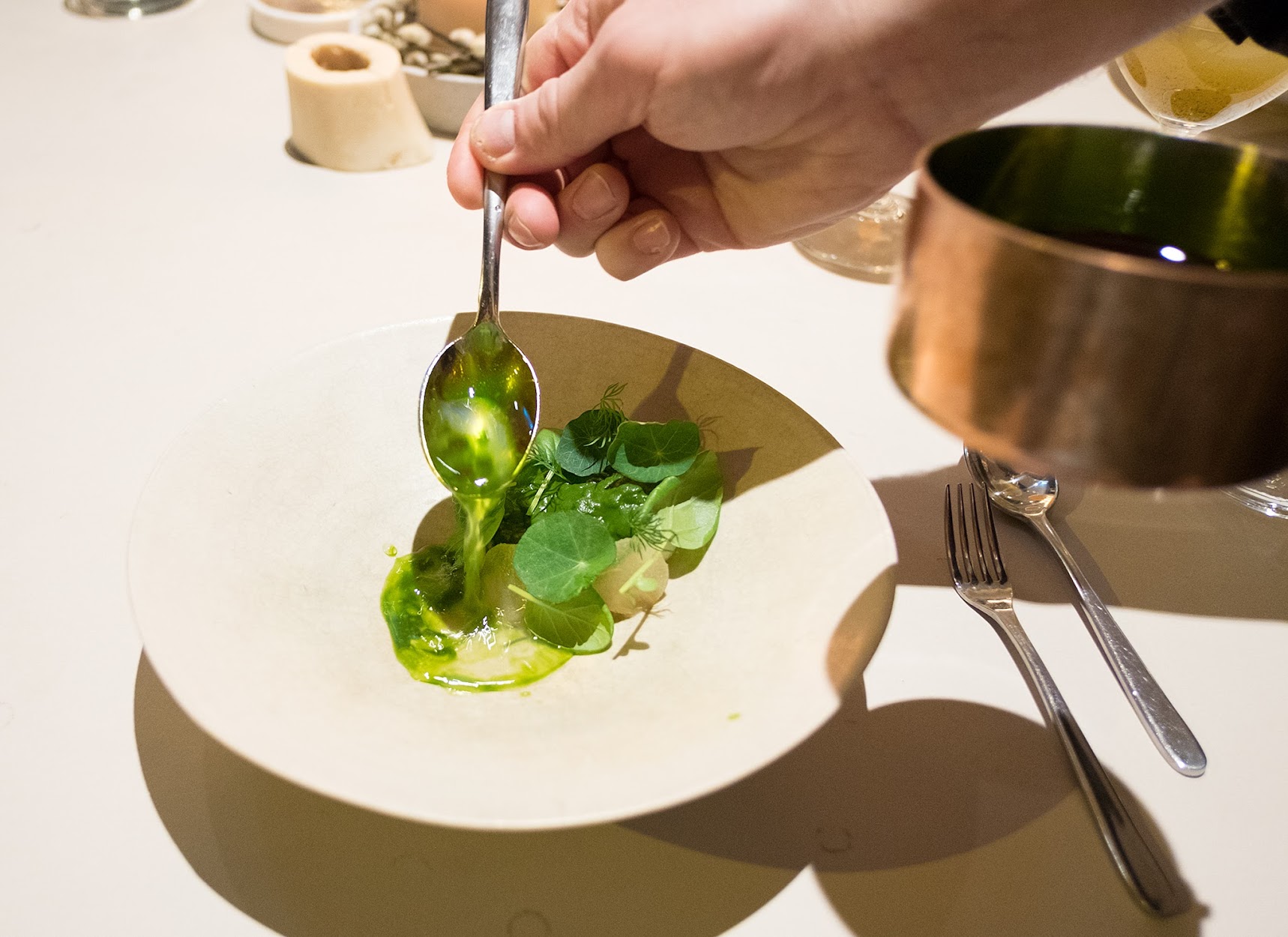 Skrei
Spinach, dill, oxidized pear, spruce shoots
Skrei (Norwegian Arctic cod) was in peak season off the frigid Norway coast. Here, it was slathered with a spinach puree, and served with fresh cress and a mussel stock infused with dill oil. The lean, muscled flesh was really nicely cooked, and the herbal oil provided the missing fat for mouthfeel. 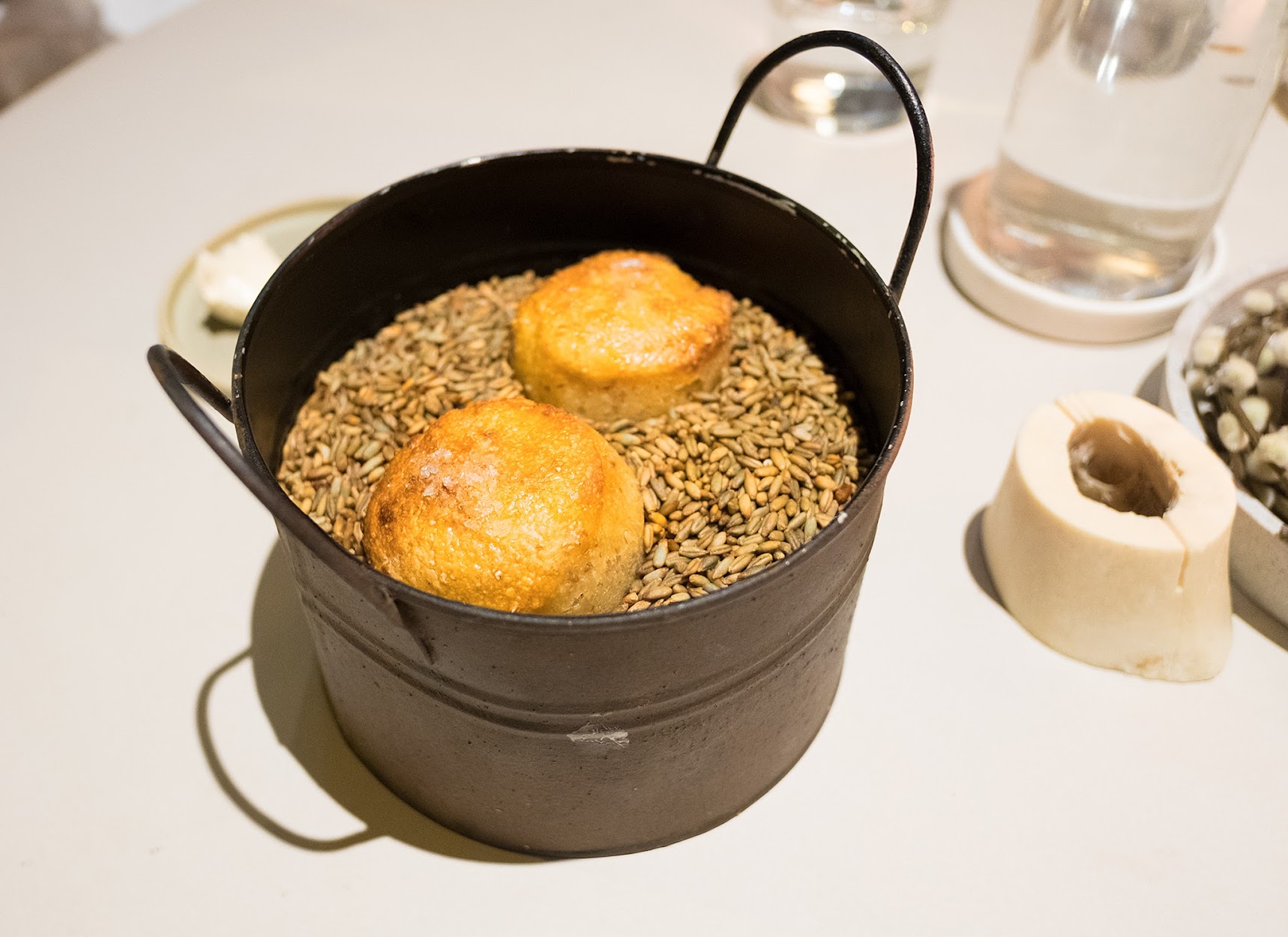 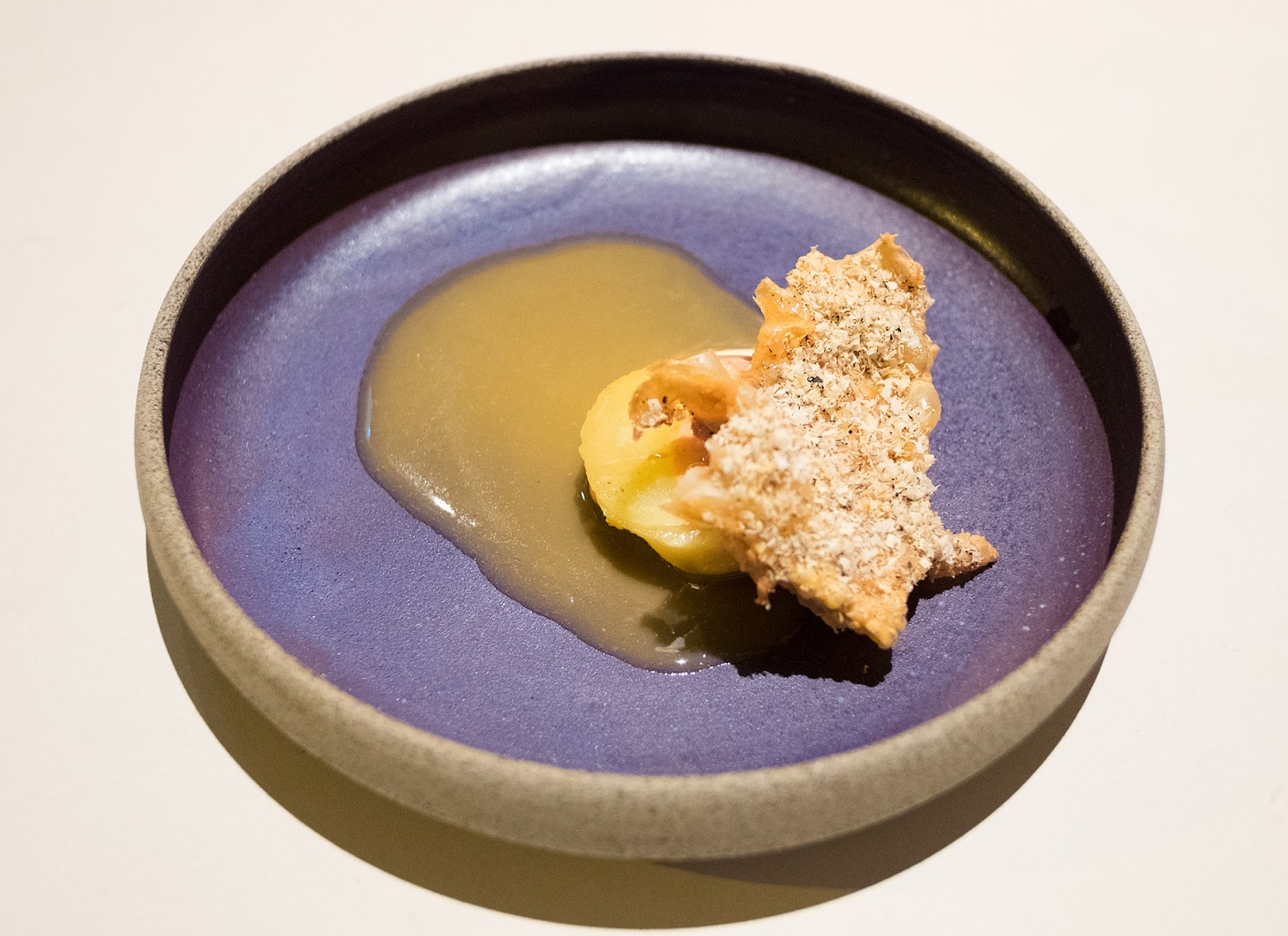 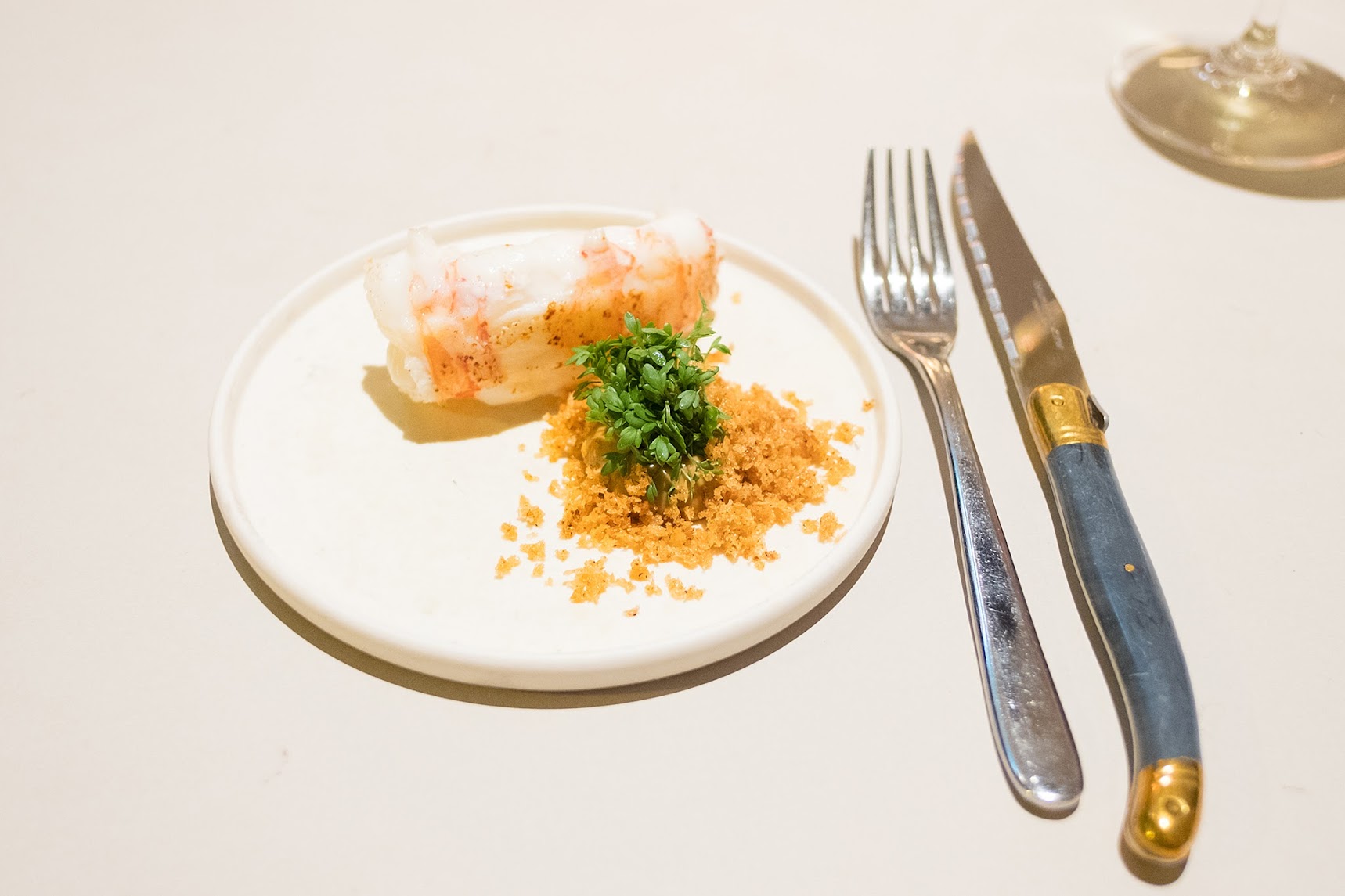 Midsund langoustine
Burnt porcini and langoustine butter, panko, cress
A supplemental course – the langoustine (whose shells were used to prepare the broth we were served at the start) was skewered on a rosemary stalk, simply seared on a 200°C Himalayan salt block and plated up tableside. This was fantastic. 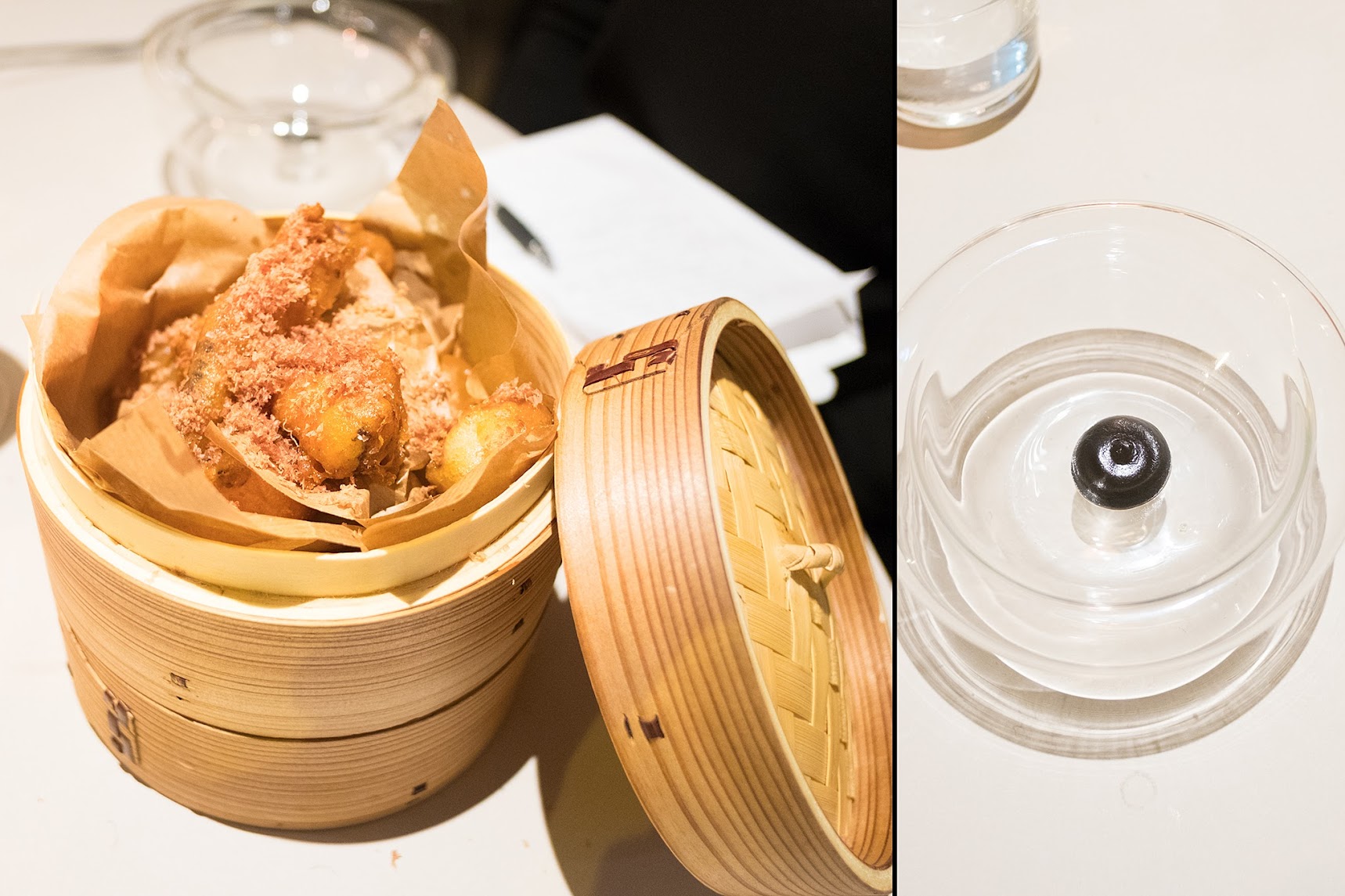 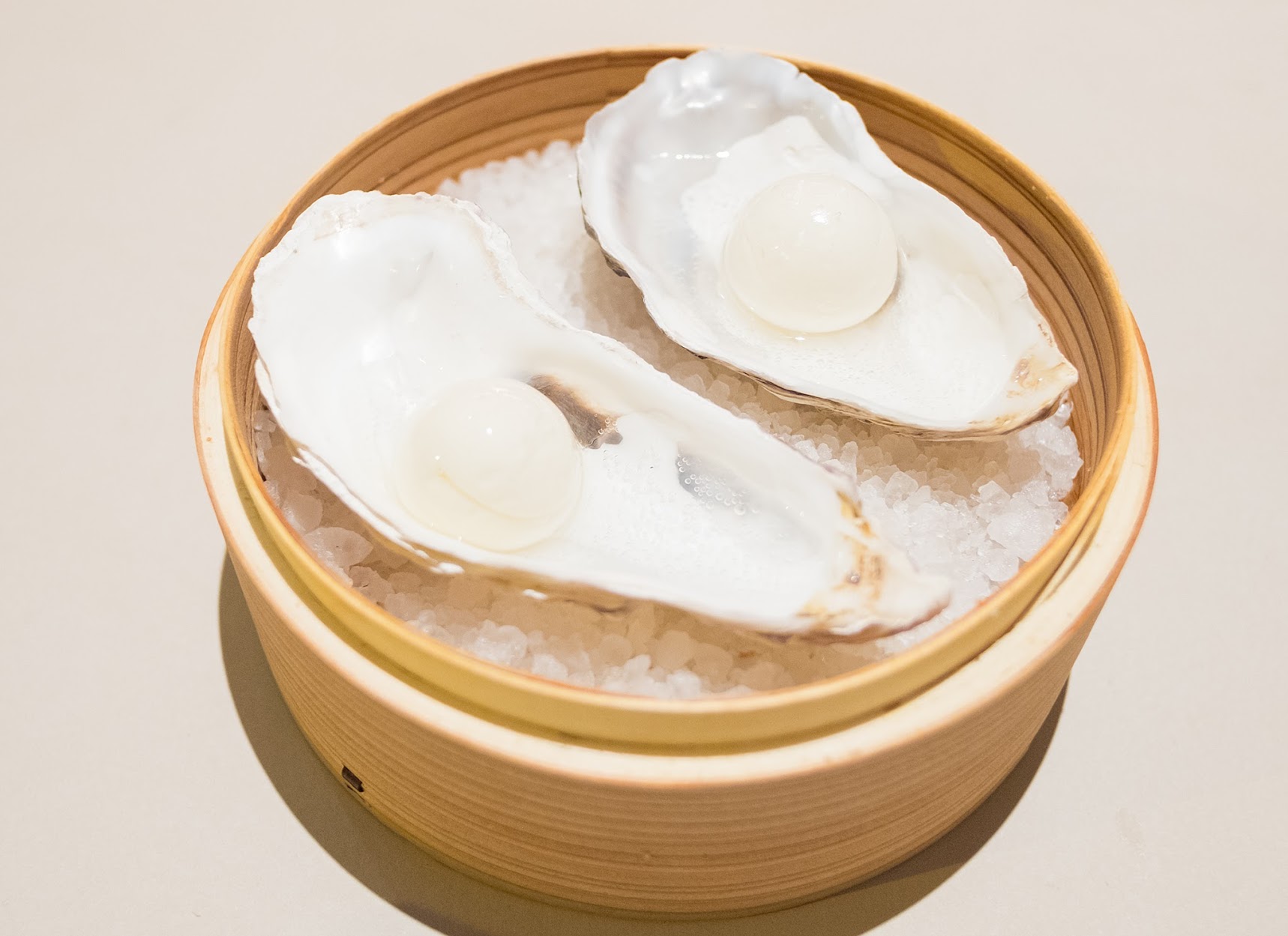 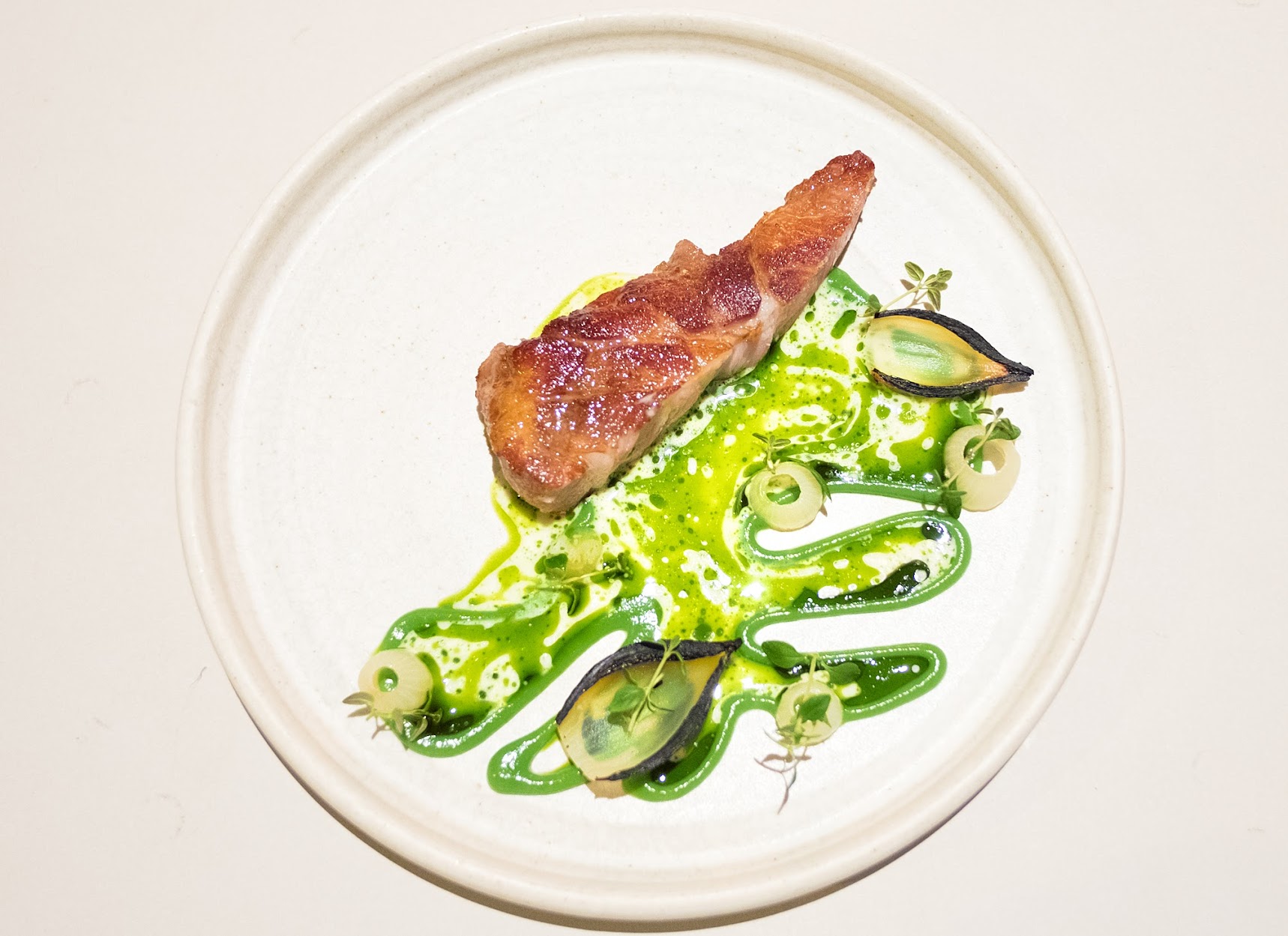 Pork neck from Støllsvidda
Broccoli, lemon thyme, pickled and grilled onions, parmesan, basil
Cooked sous vide at 58°C for a few hours, the meat was tender but not mushy. The killer element was a pork jus infused with parmesan and basil – it connected every other component and made the whole plate sing. 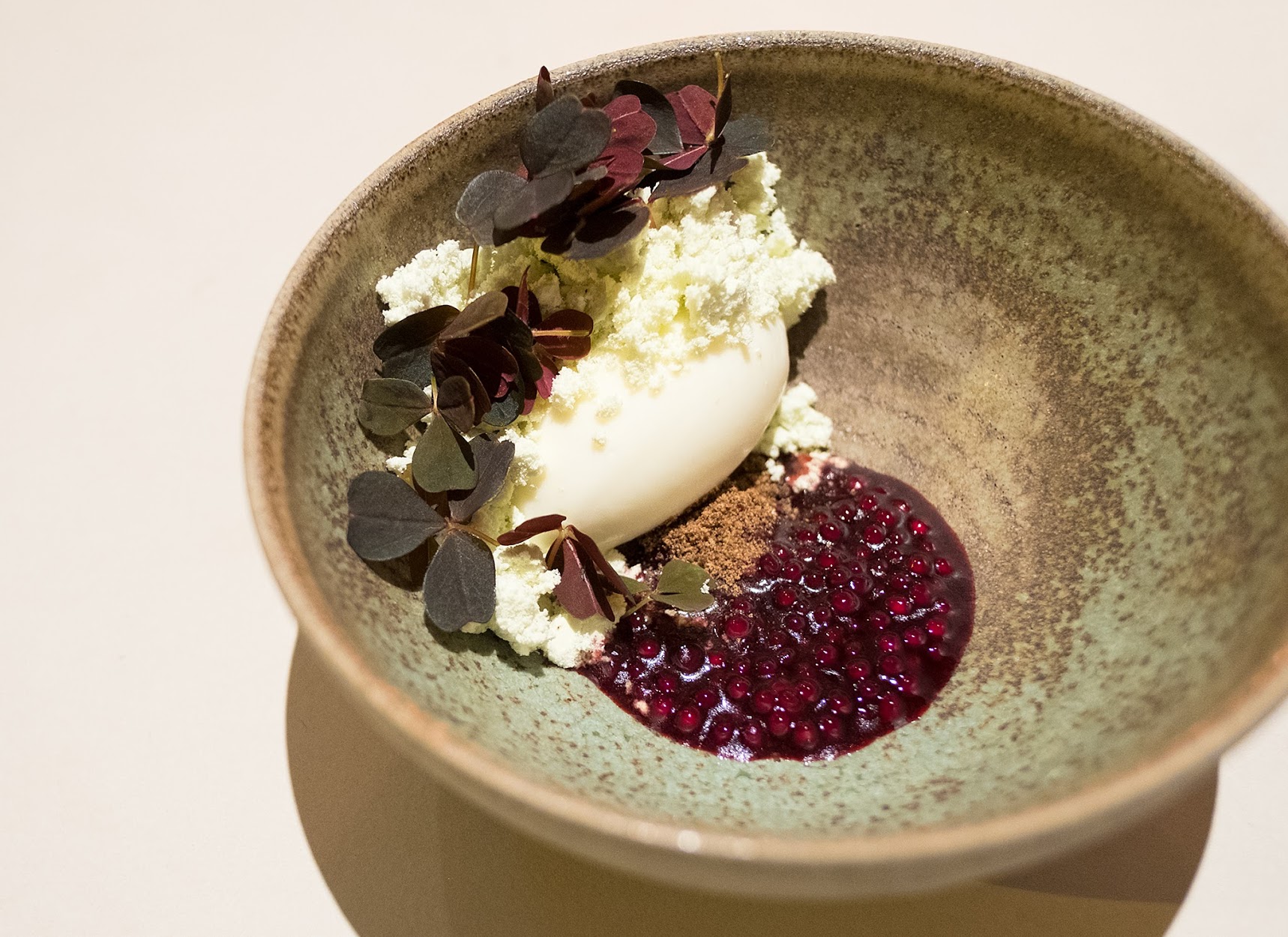 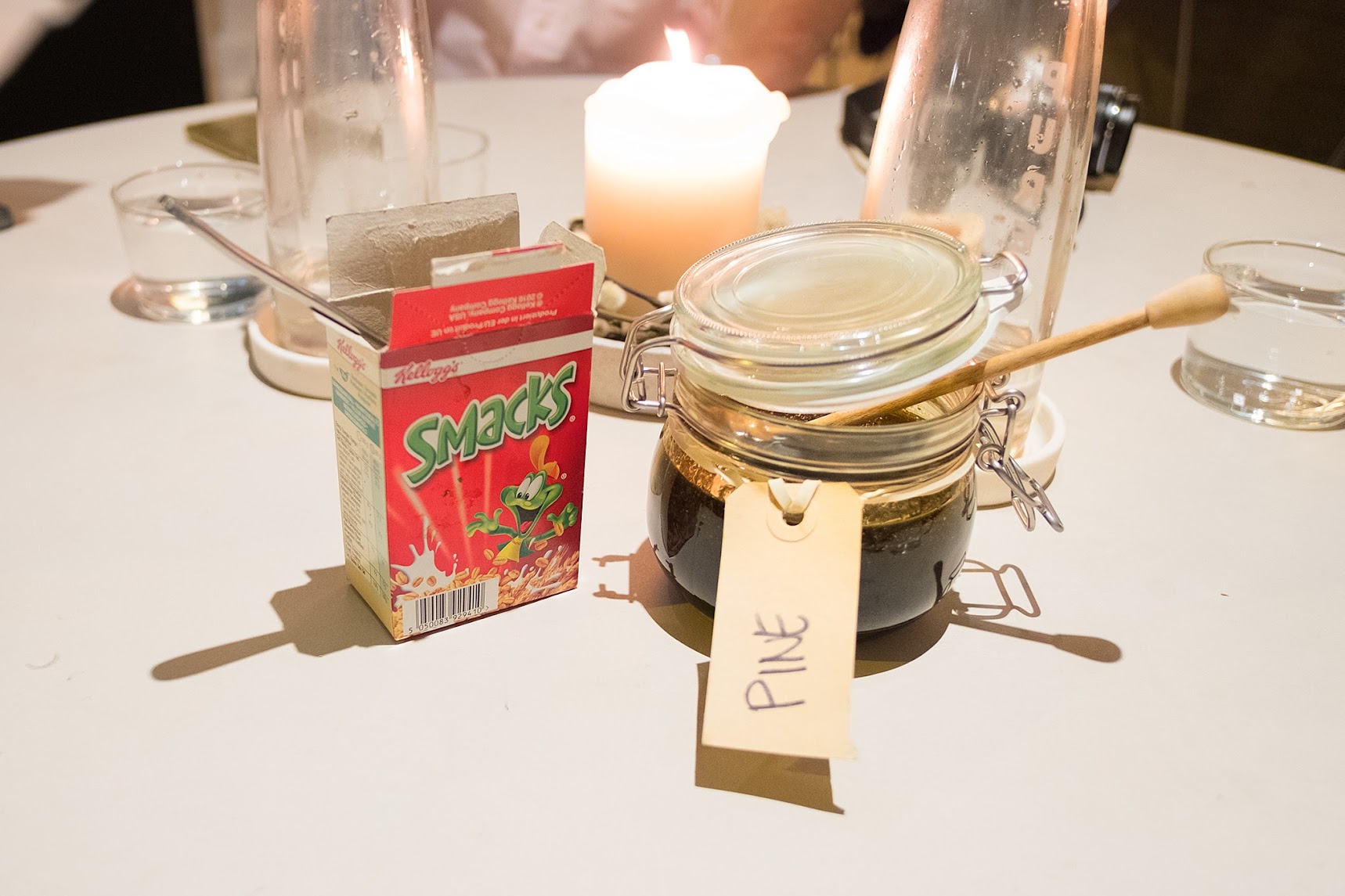 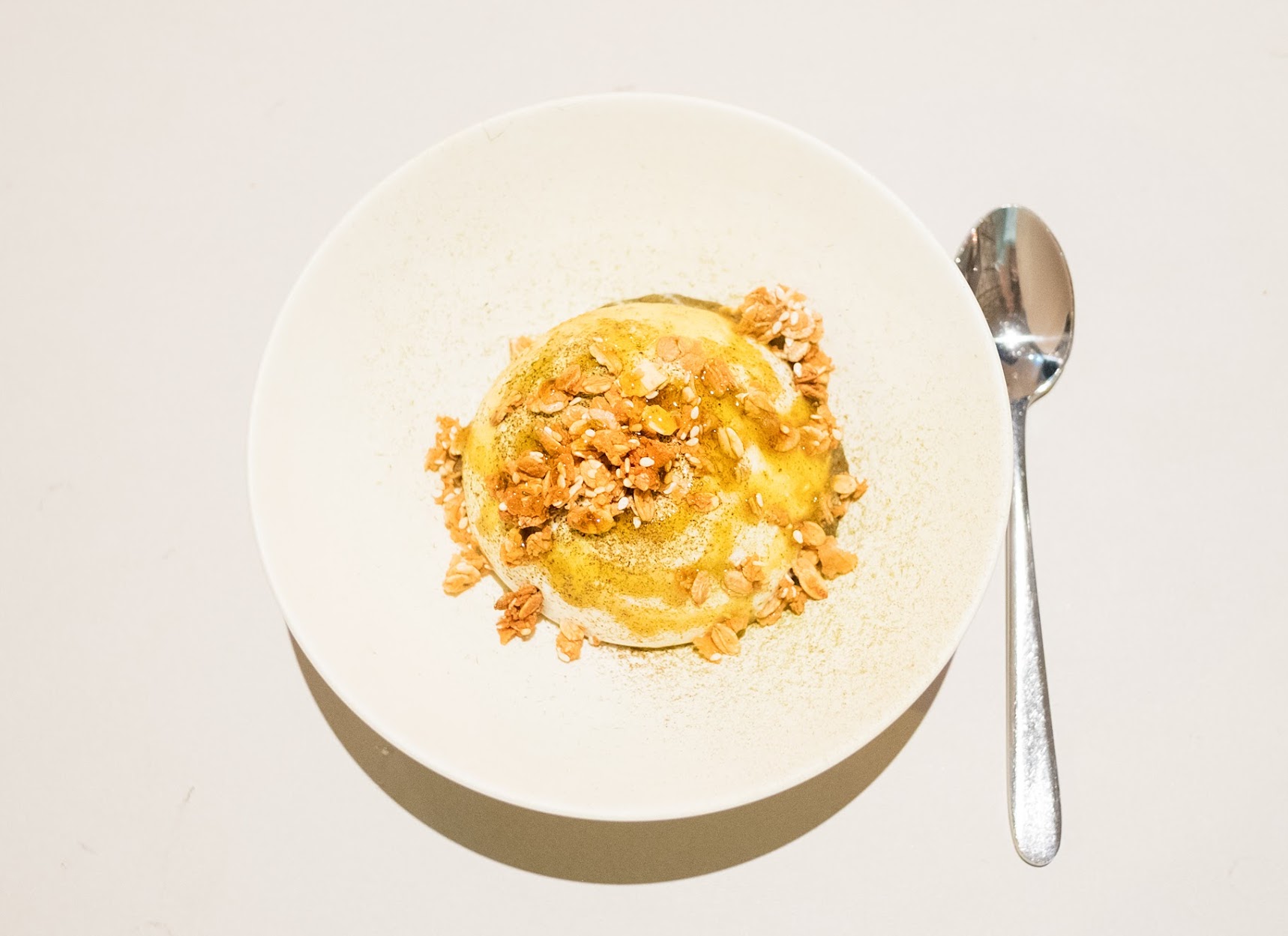 Brown butter ice cream
Yogurt, muesli, juniper powder, pine syrup
The juniper-dusted yogurt hid a salty brown butter ice cream, which was made from the butter used to cook the rye crumbs served in the “Tree” course above – really, really good. The sweetness in this bowl came from a 6-year-old pine syrup, as thick as molasses but with complex herbal notes. Very enjoyable. 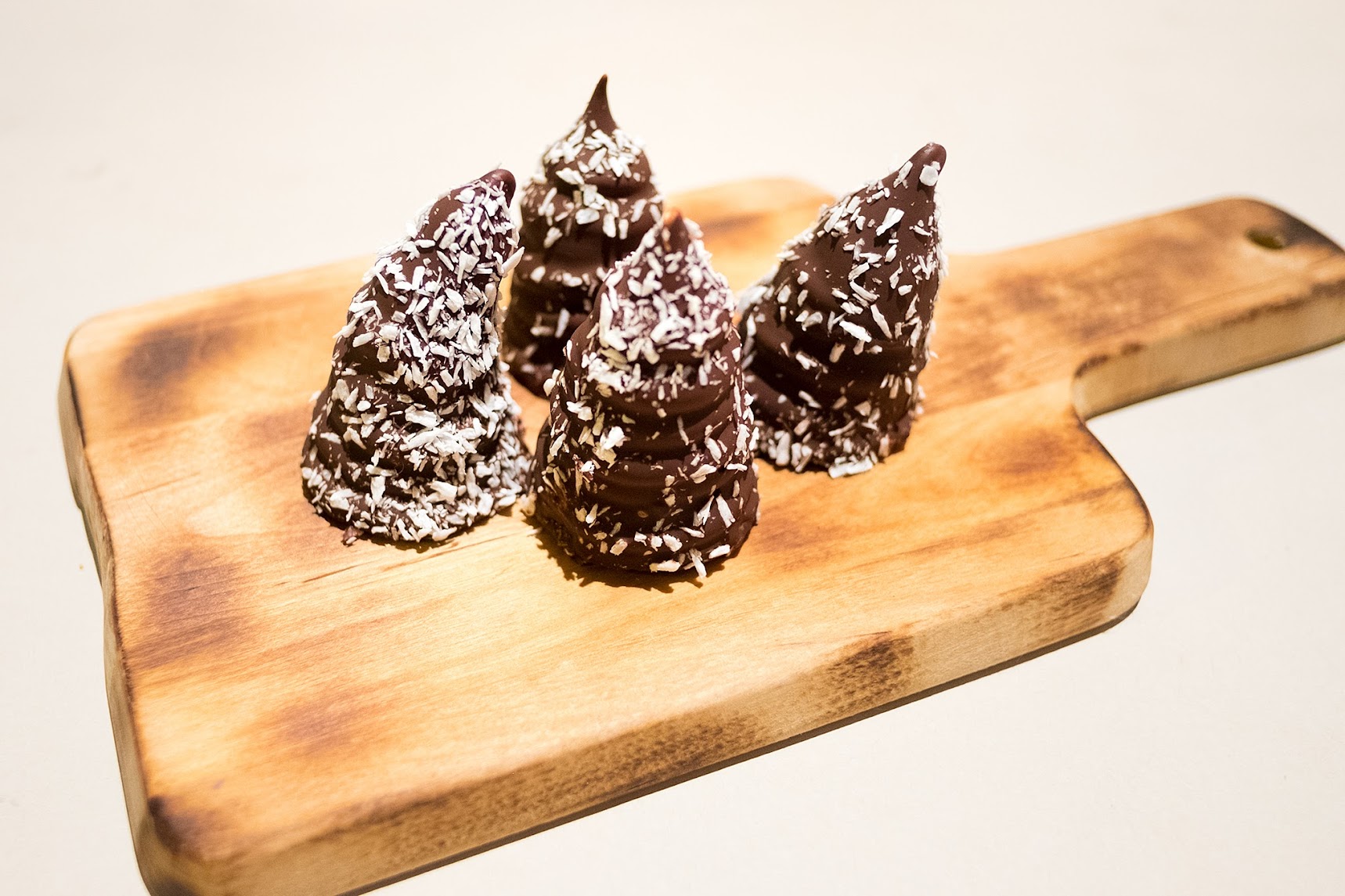 Chocolate-dipped fastelavnsboller
A sort of cardamom-flavoured cream puff traditionally eaten around Fat Tuesday, we encountered fastelavnsboller everywhere during this trip to Scandinavia. This version was shrouded in a dark chocolate shell – delicious.

The 2017 Nordic Michelin guide was released the day after we dined at Bokbacka. Unfortunately, they did not earn a star, although based on our meal, they certainly qualify. The restaurant is only slightly more than a year old, so perhaps next year will bring them better luck. Until then, we’ll consider it one of Oslo’s under-the-radar gems.