We’ve been fortunate not to have had many regrets about missed opportunities through our years of dining. Perhaps the top of my list would be forfeiting reservations for elBulli’s final season (thankfully, family attended in our stead). Second to that, is not making it to the vaunted Townhouse during the tenure of John and Karen Shields.

Their little restaurant in Chilhowie, VA closed four years ago, but their time in Smyth County has directly inspired (down to the name!) a stylish, low-key establishment in Chicago’s Fulton Market neighbourhood. After meandering about the East Coast, this was a homecoming of sorts for both of them, who cut their teeth cooking in Chicago’s best kitchens. For us too, this meal was a return to a city we had not seen in six years – indeed, this blog was started immediately after we moved from Chicago to San Diego, and thus the many excellent meals we enjoyed in America’s most underrated metropolis (yup, I said it) have never been logged.

A single menu is served at the restaurant, paid for in advance via Tock (which seems quite widely used in the city of it’s conception). Here is what we ate. 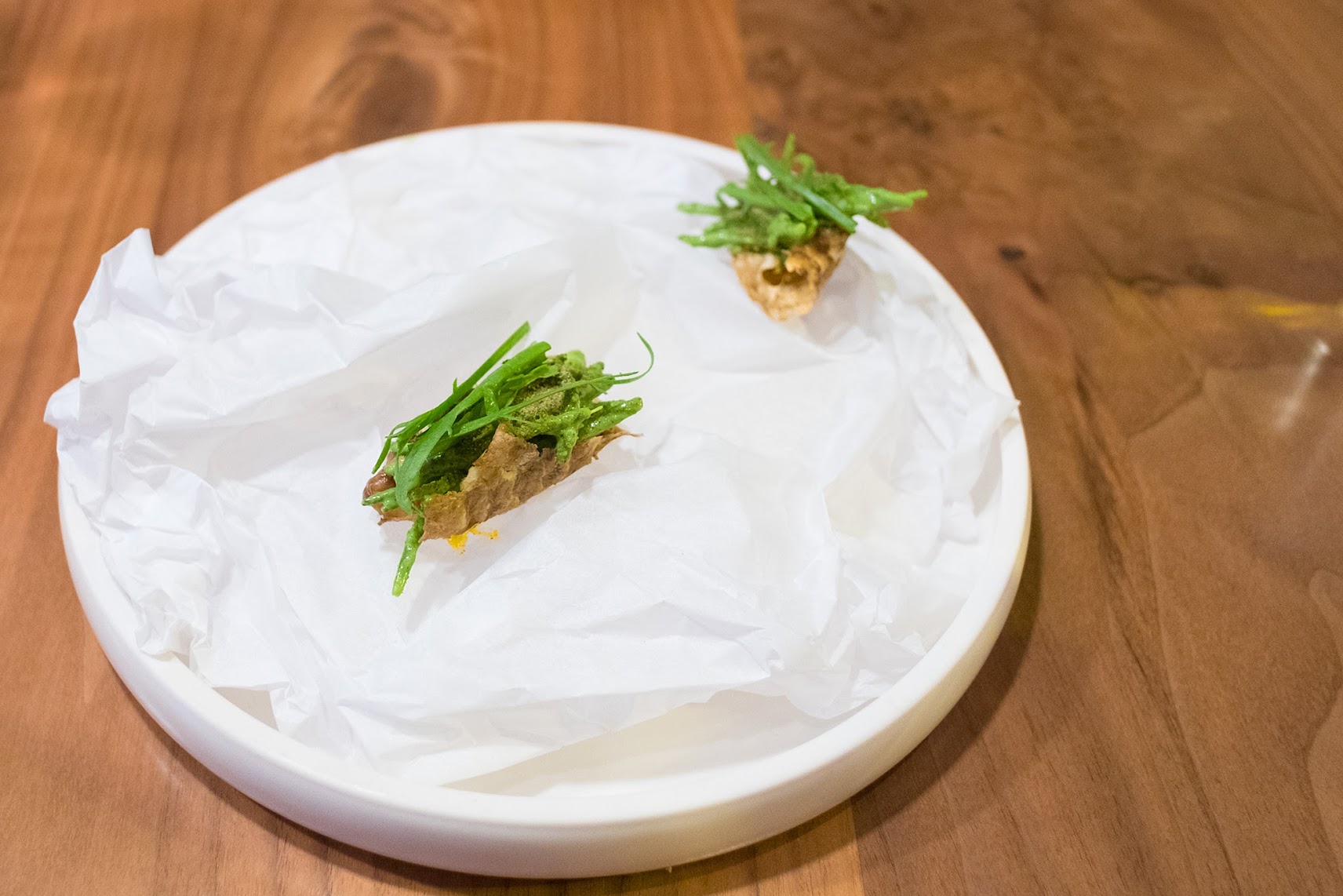 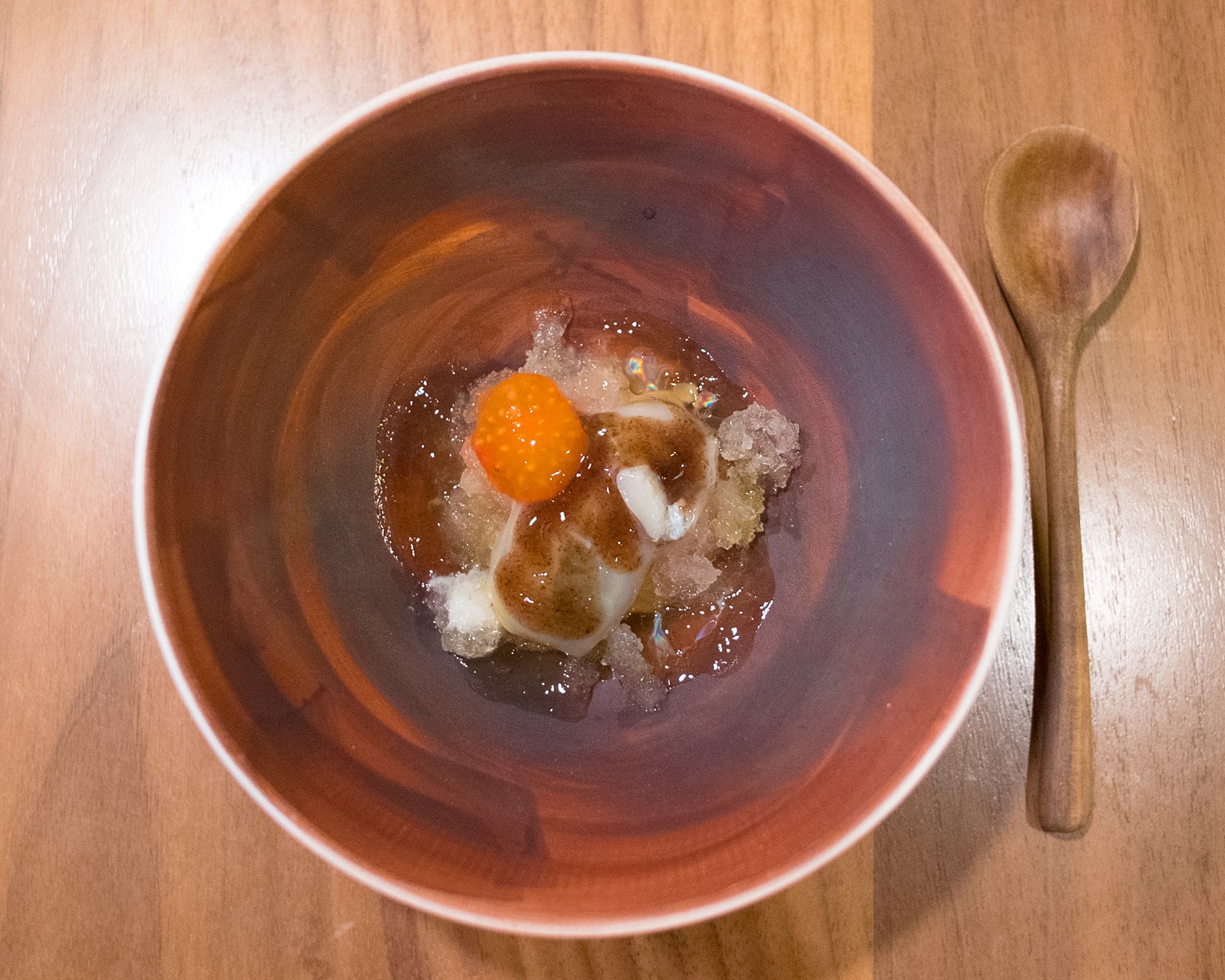 Frozen tomato, seaweed, oyster
A last gasp of summer in Chicago – tomatoes and an ice of tomato water, with kasu cream. The Beau Soleil oyster was drizzled with an umami-laden seaweed sauce. It was a warm evening outside, and this was perfect. 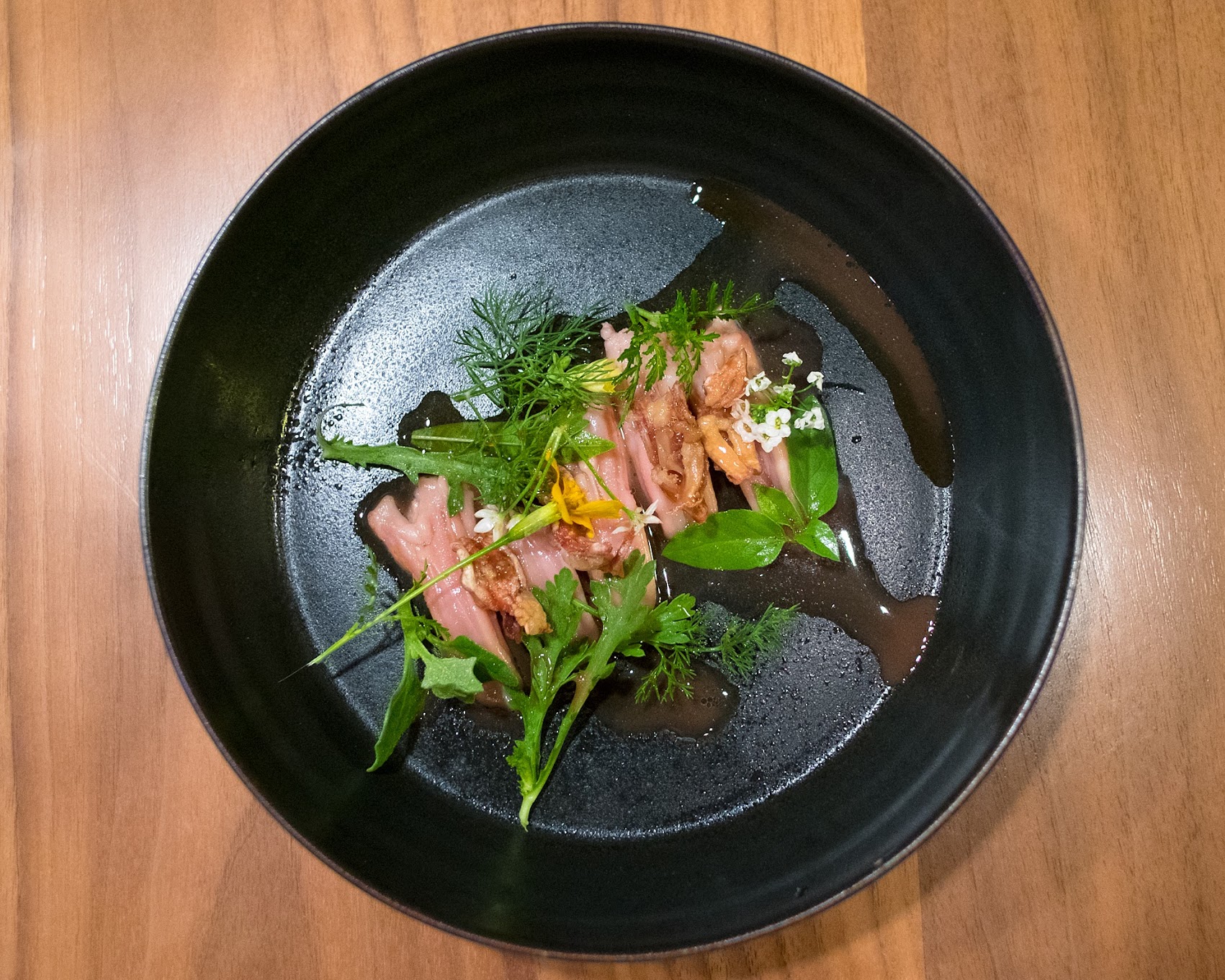 “A salad of duck and herbs” 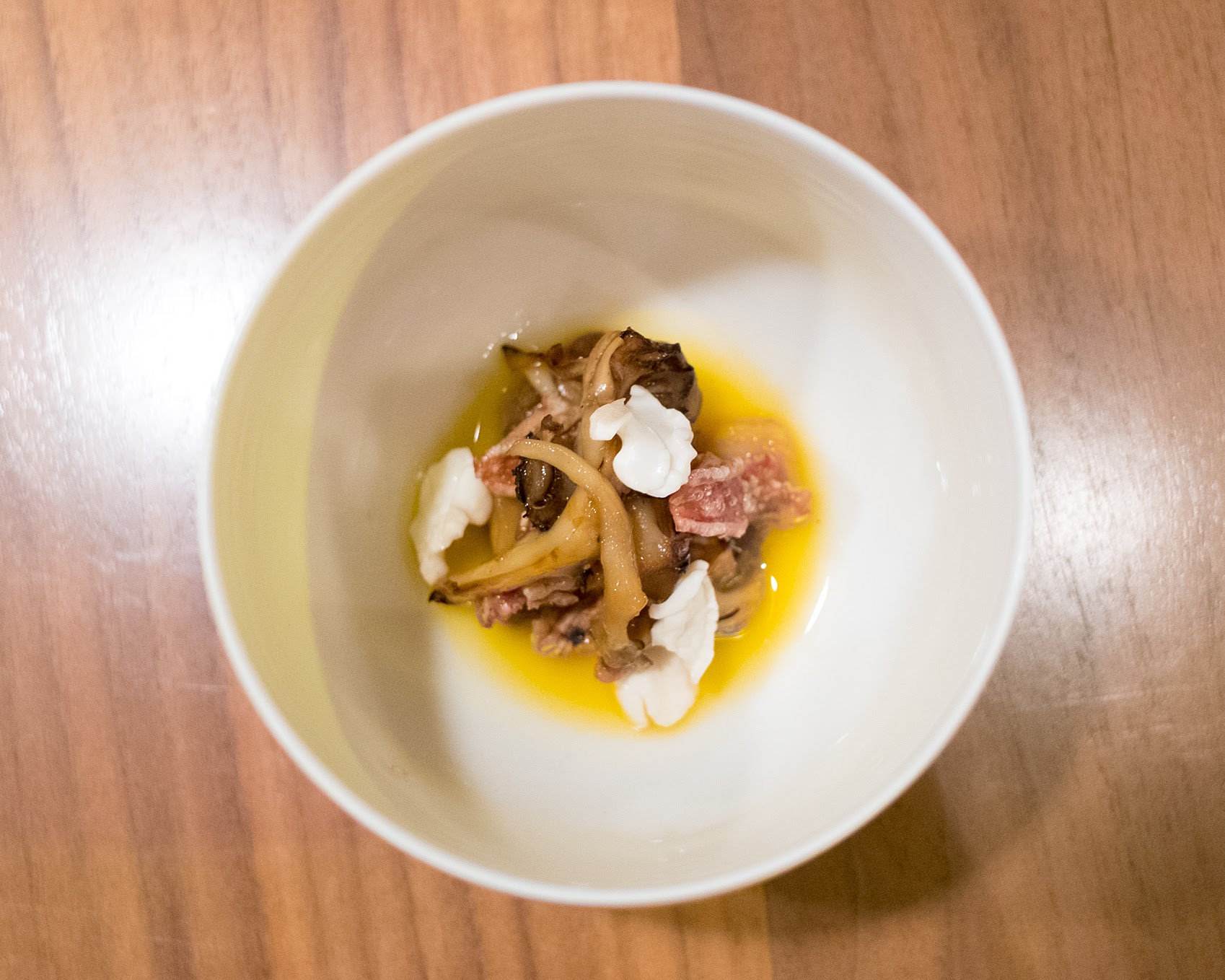 Duck tongue, hen of the woods, black walnut
The Janus course – two presentations of duck tongue. I thought of them as “Summer” and “Fall”. “Summer”was a bed of gelatinous braised duck tongues – a fatty delight. These were topped with fried tongues and a garden of peppery, spicy herbs. “Fall” consisted of fried tongues with maitake mushrooms in a pumpkin broth. Black walnuts provided complexity and texture. Such a wonderful contrast between the two excellent dishes – the former “awakening” and the latter “comforting”. 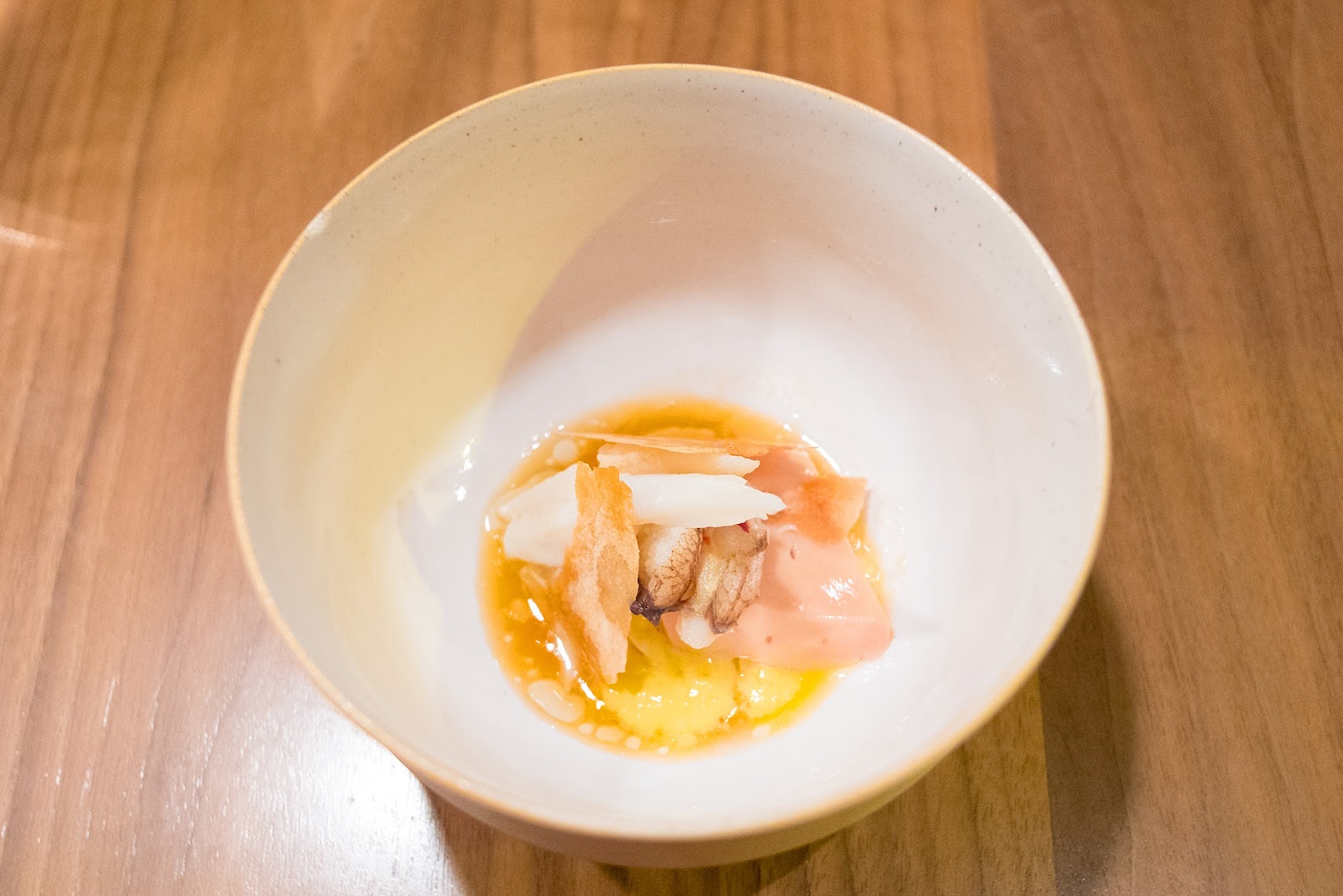 Dungeness crab, foie gras, scrambled kani miso
My dish of the evening – easily 3-star level. The kani miso had a custardy consistency that bridged the textures of the foie gras and crab, both of which were wonderfully sweet. Crisp shards of reduced kombu stock were absolute genius! Balanced flavours, excellent cooking. 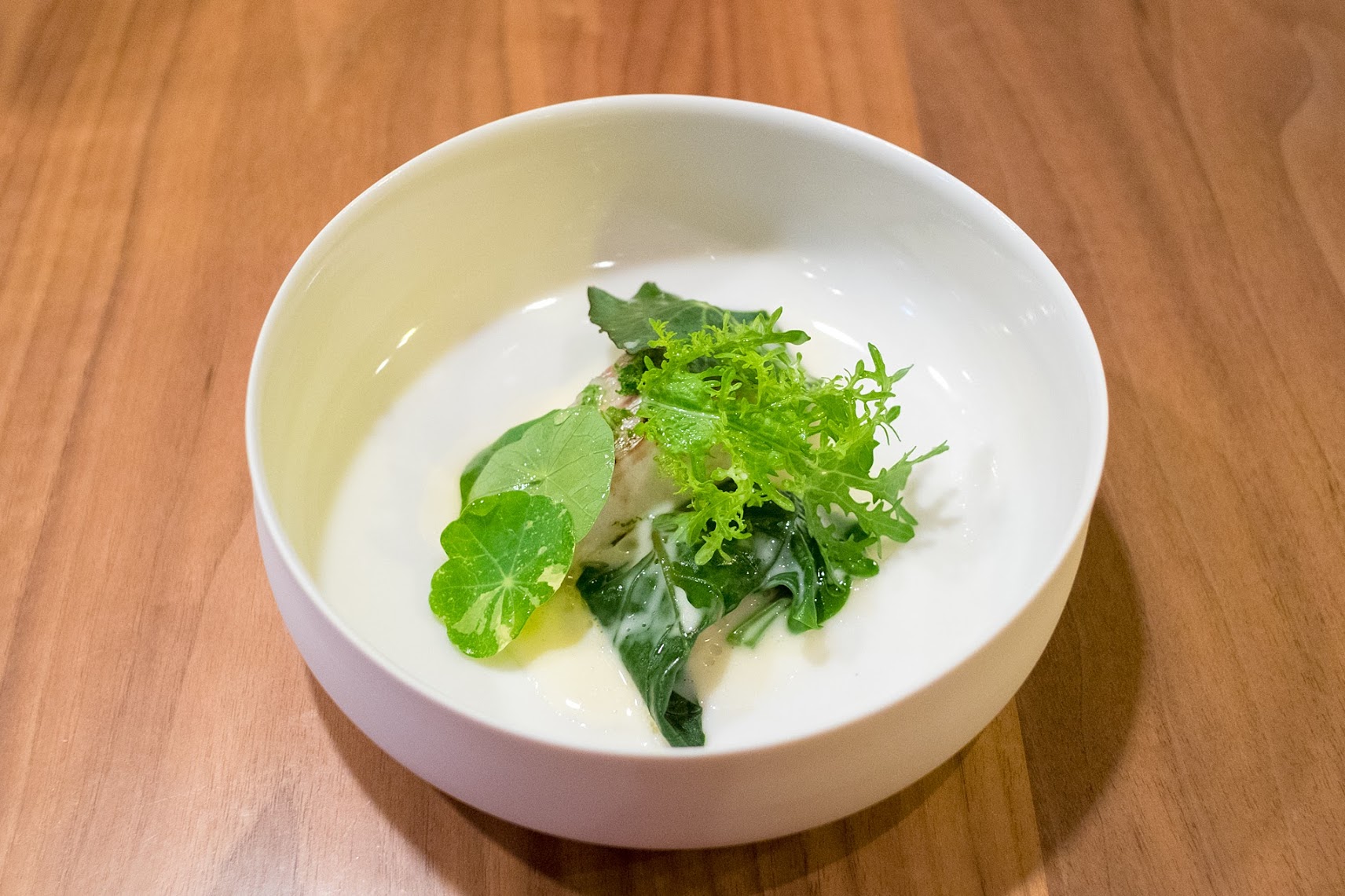 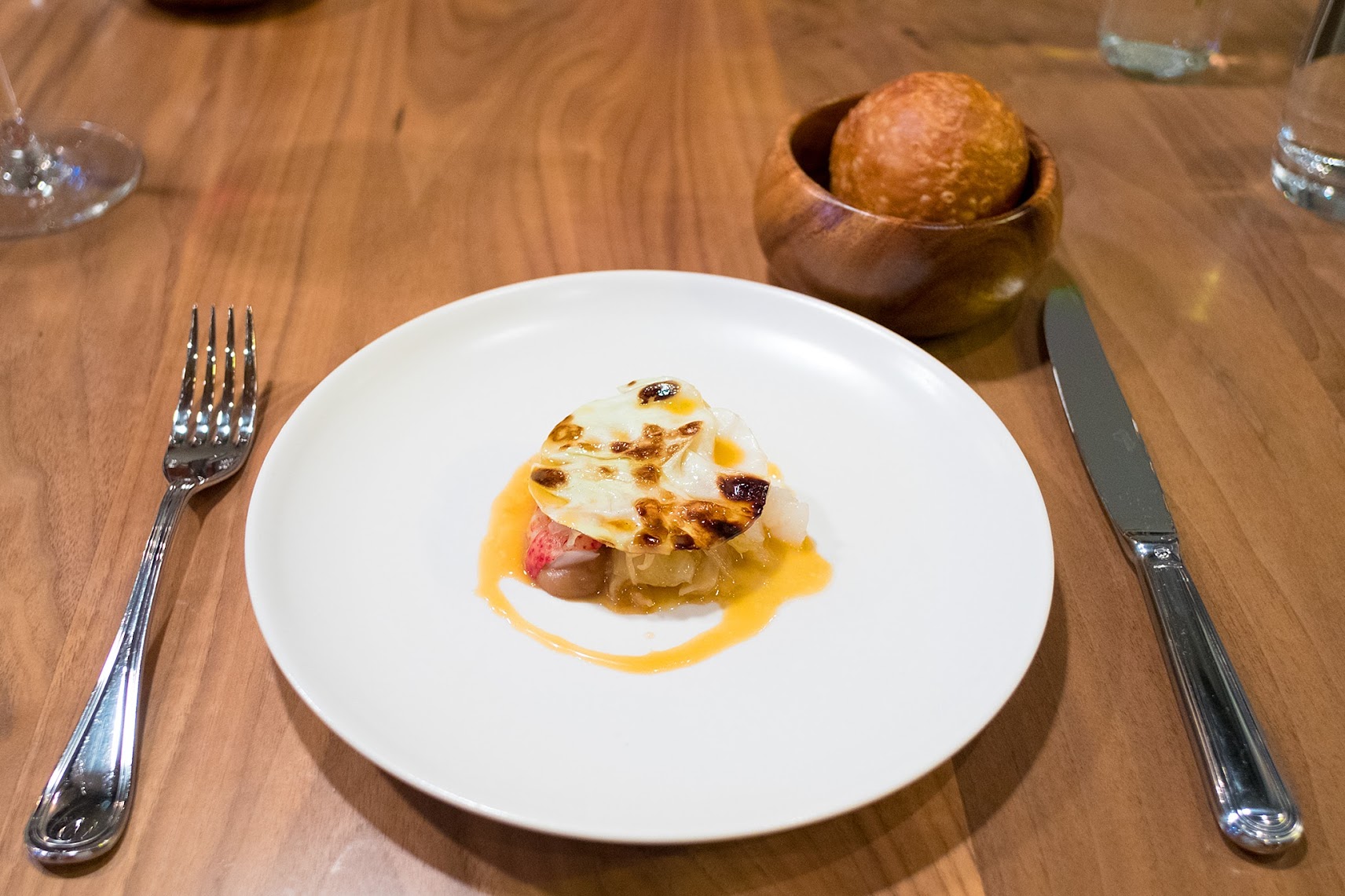 Cabbage and lobster
Onion, reduced whey, aged beef
A surf-and-turf of sorts, with the bovine element coming in the form of aged beef tallow served with the brioche – the best ever substitute for butter. The lobster was really well cooked (this kitchen knows its way around proteins), and the cabbage spent just enough time over the hearth to pick up a light smoky note. Excellent. 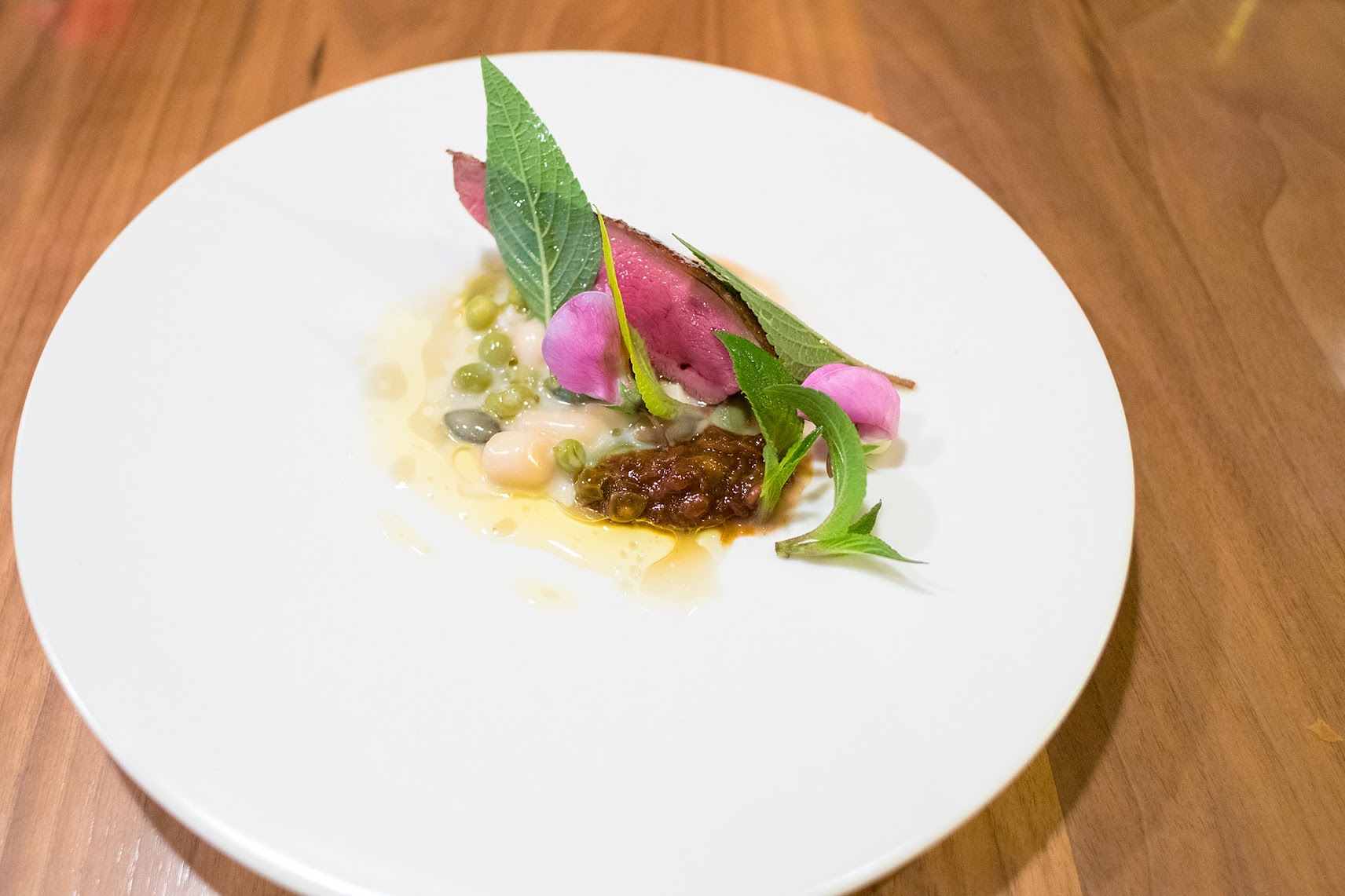 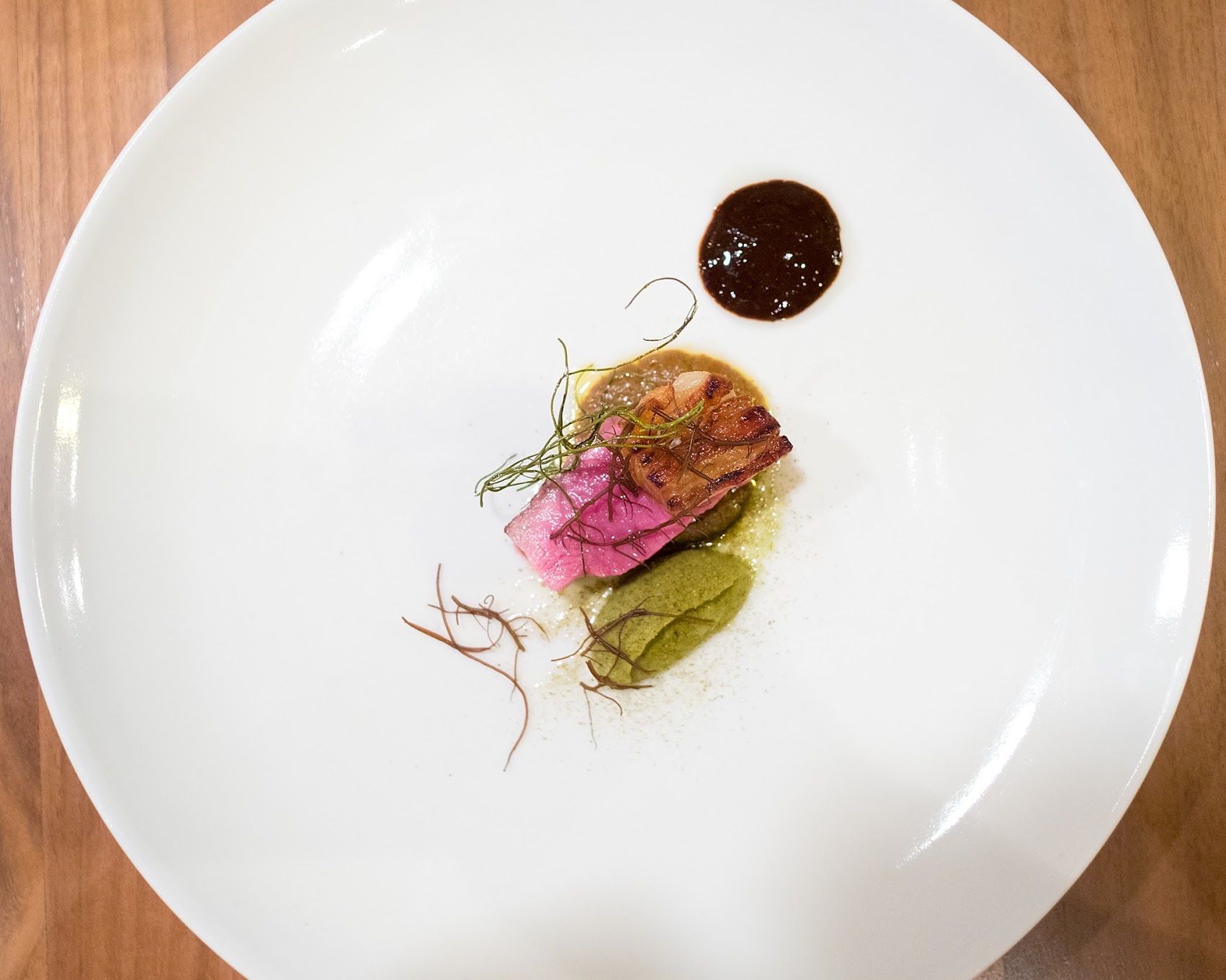 Slow-cooked saddle of lamb
Kelp marmite, roasted mushroom, black garlic, mermaid’s hair
Both the lamb and the squab in the previous course had been hung over the fire throughout dinner (and likely for quite some time before), adding that extra depth to both meats. The star here, however, was the kelp marmite – it’s complexity was impressive. Interestingly, the roasted mushroom element would show up in the dessert course below, serving as a bridge between the savory and sweet portions of the menu. 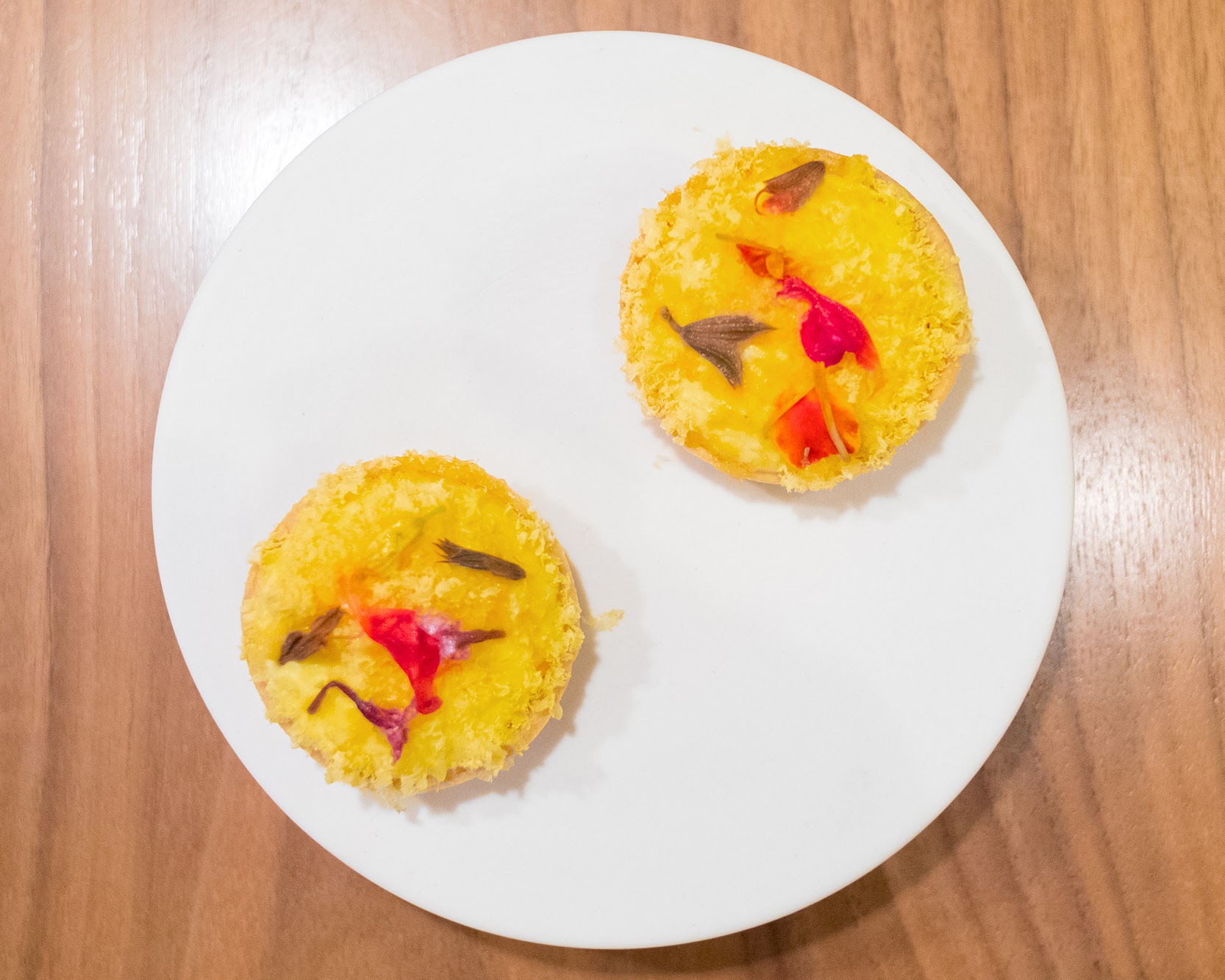 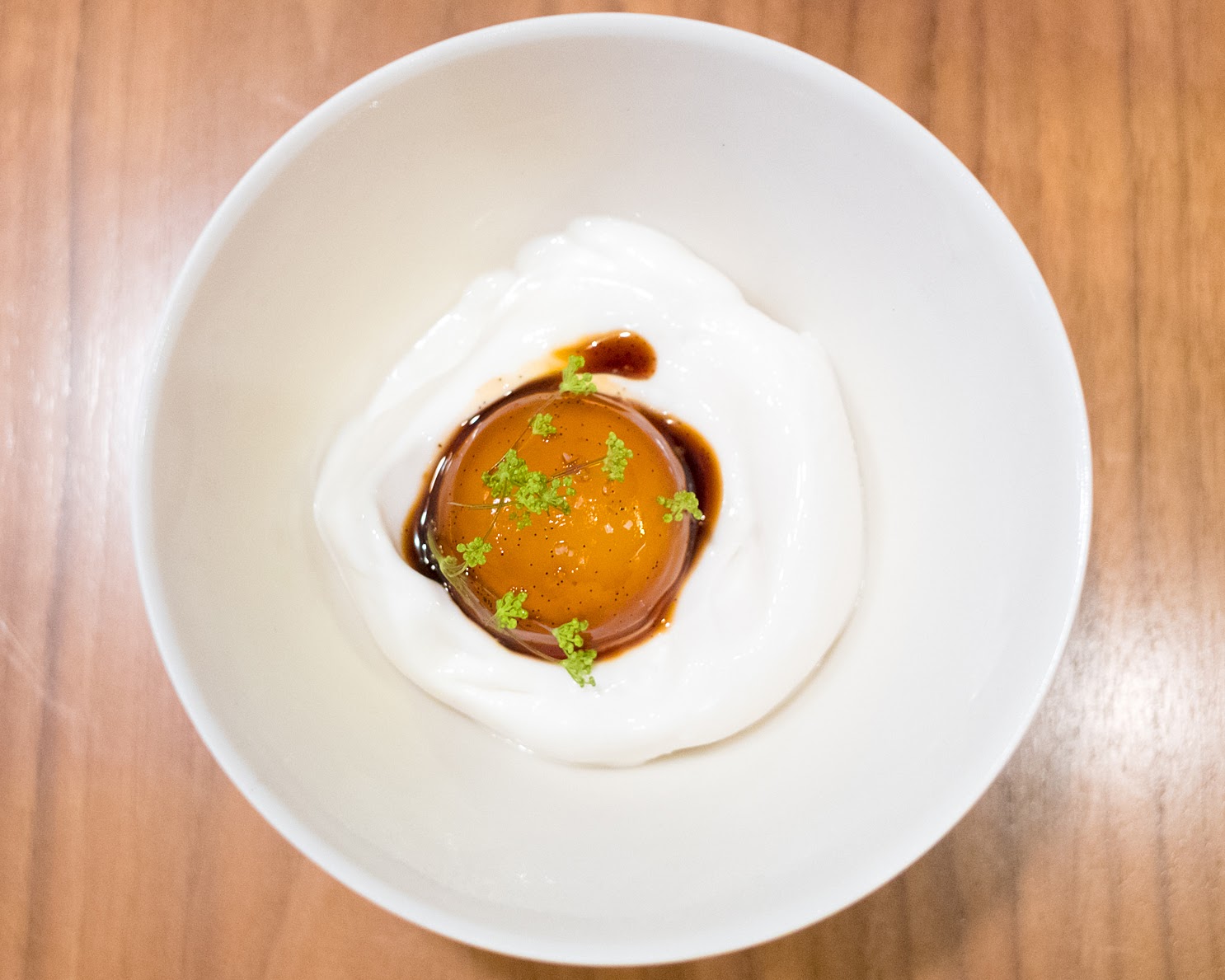 Egg yolk soaked in salted licorice
I imagine this must be a polarizing dessert. I am not a fan of licorice, but the texture of the yolk was pleasing, and the bitterness did offset the sweetness of the black raspberries (set at the bottom of the bowl). The fruit was covered by a thyme meringue folded into yogurt – this was really fantastic and I wish I was served a giant bowl of it. Frozen tomato mousse, noyaux, spicy flowers
A final nod to the end of Summer, utilizing (what I imagine are) the last tomatoes and peaches of the season. The sweetness of the fruits was kept in check by the various flowers. Such a gorgeous bowl! 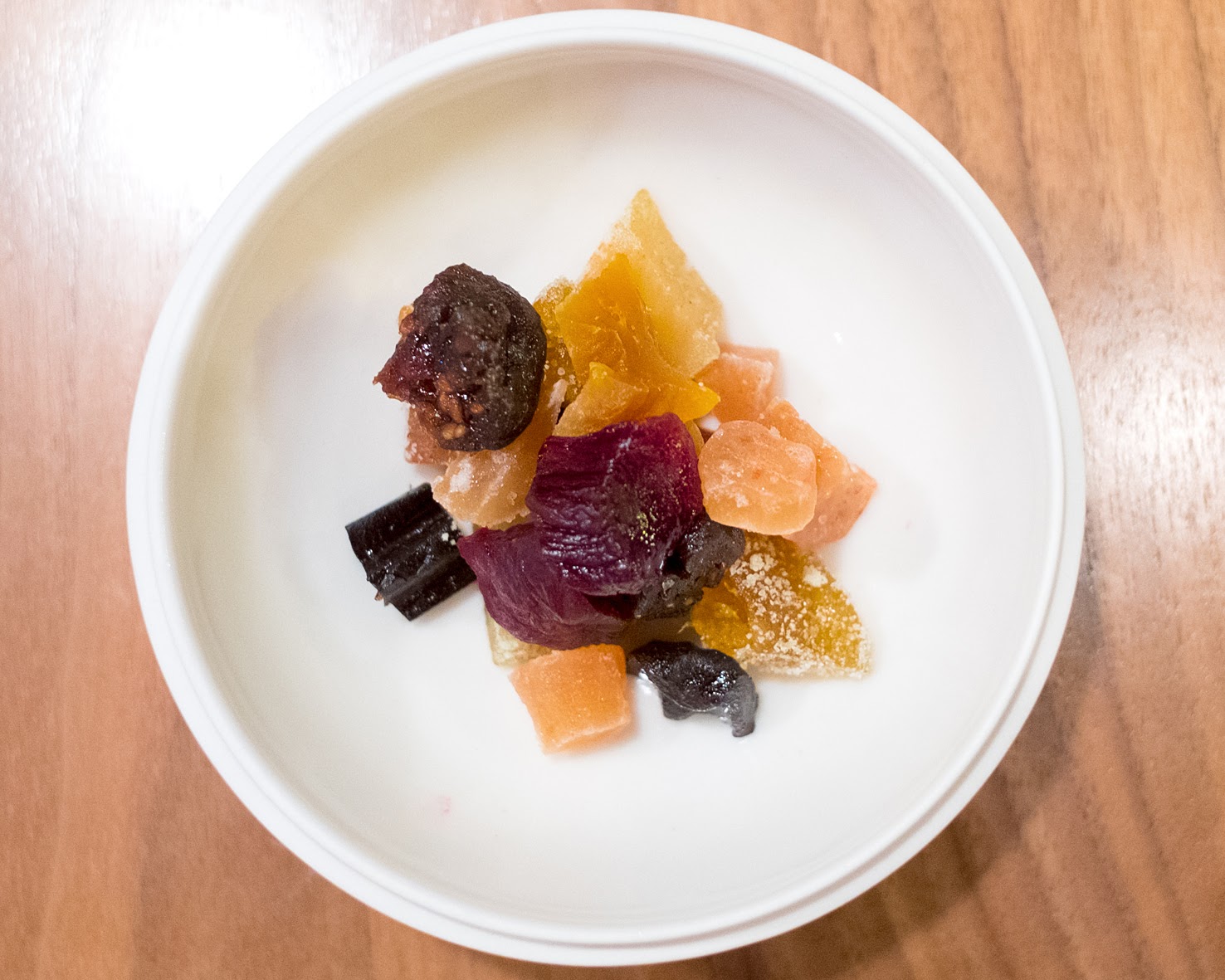 The thoughtfulness of the menu, precision of cooking, elegance of presentation, efficiency of service – all belie a restaurant barely open for a month. If this is what they’re capable of now, the sky’s the limit. Smyth is going to be a new star on the American dining scene, and I’m eagerly looking forward to their continued development.