Commis was the second restaurant I ever posted about, in late 2010, when I started this blog. At that point in time, we had just moved to San Diego from Chicago, James Syhabout was slinging pans, Carlos Salgado was working pastry, and the restaurant had just earned its first Michelin star serving a 4-course menu for $68. Nearly six years have gone by since then. Commis has added a second star, and the menu has lengthened to 8 courses for (a very reasonable) $125. As before, we found ourselves perched at the kitchen counter – really, I can’t imagine dining any other way here. 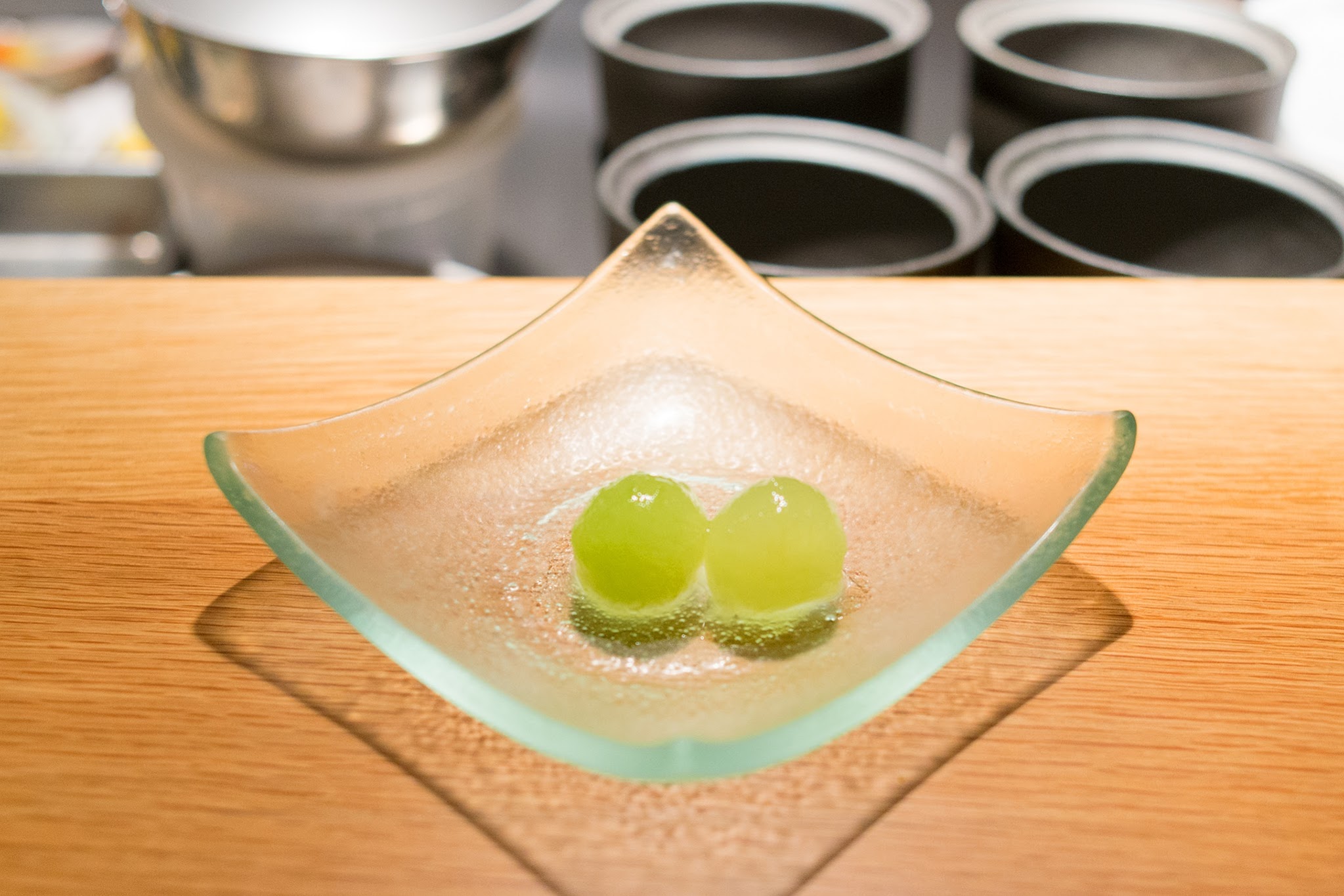 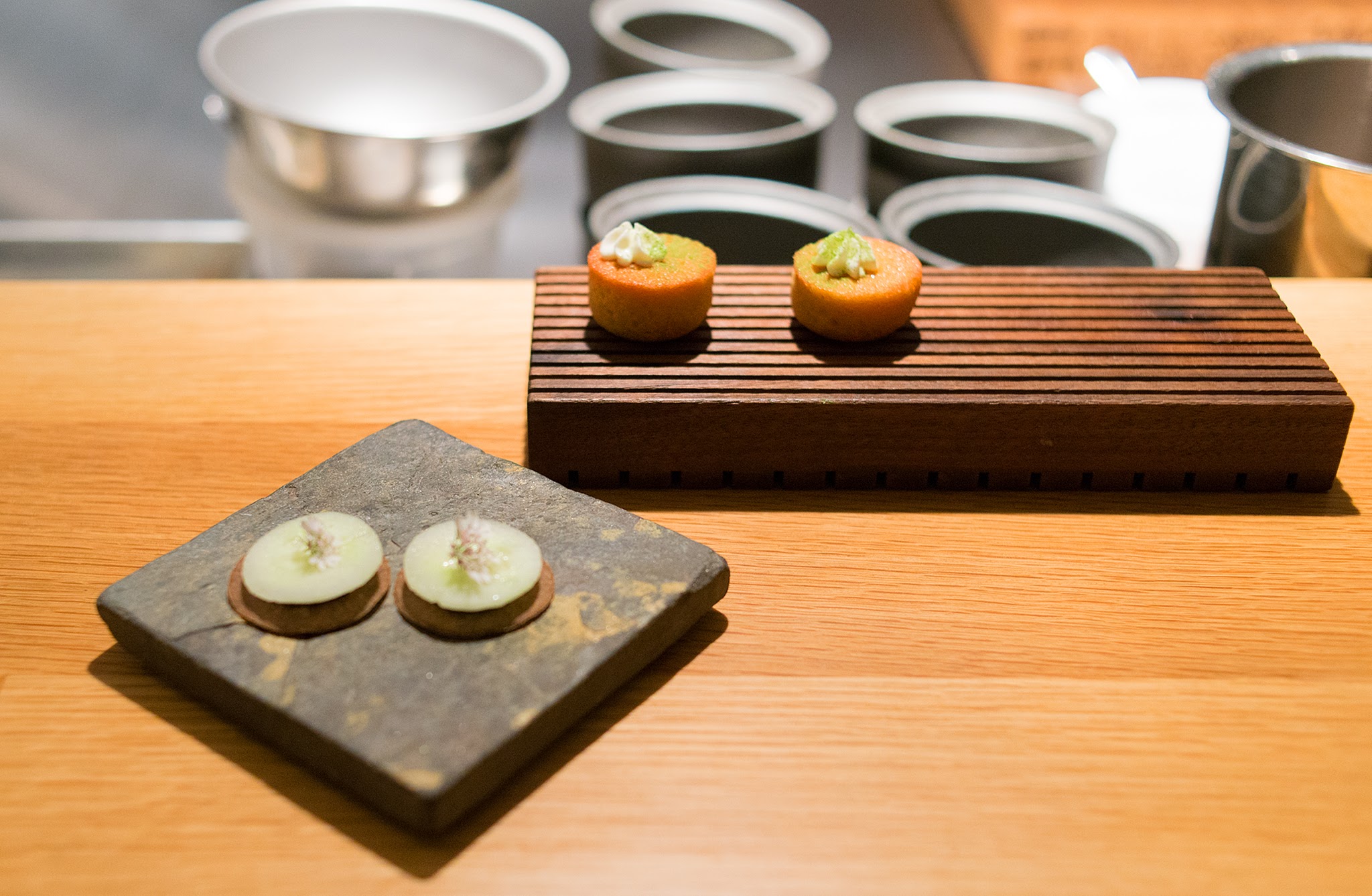 Caramelized onion financier, sour cream
Tuna confit, cucumber, black lentil crisp
A pair of strong bites. The lentil cracker in particular displayed a fantastic contrast of textures. Together, these set the tone of the meal – umami and tang. 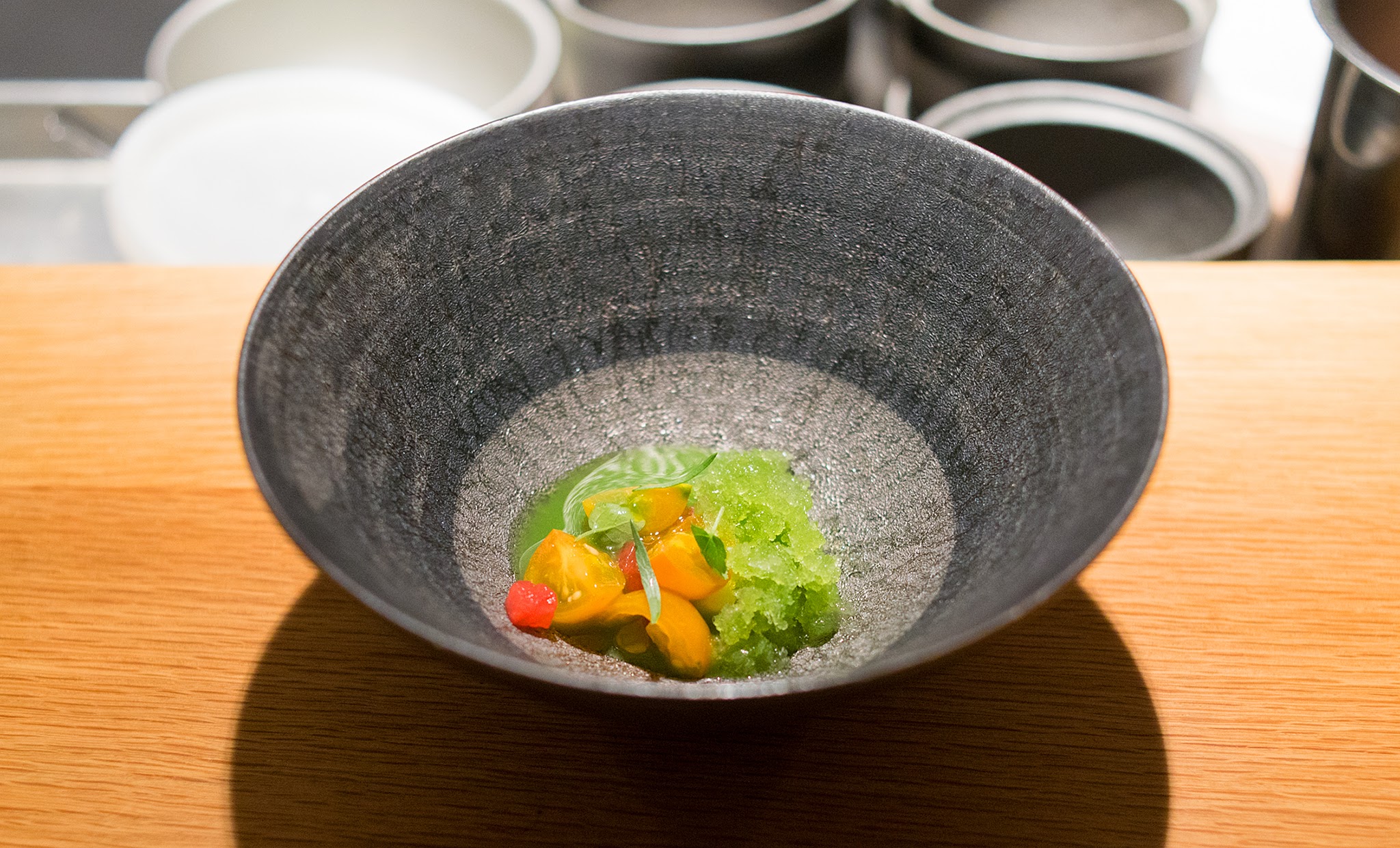 Cherry tomatoes
Lemon verbena, yogurt, watermelon rind granita
The tomatoes, sweet though they were, did not steal the show. Instead, the stars were the frozen watermelon rind, bursting with acid and salt, and the creamy yogurt that held it in check. Excellent. 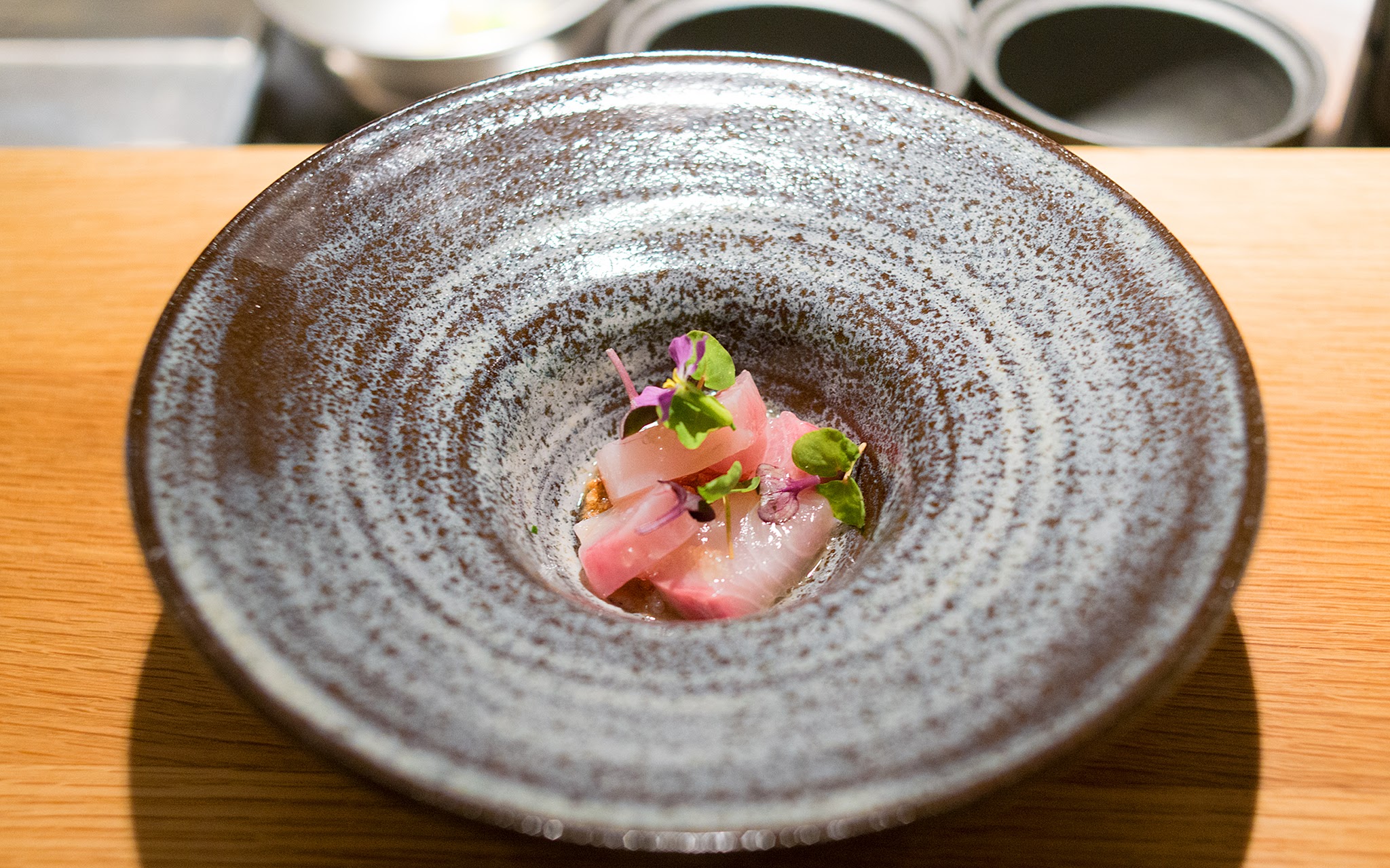 Kampachi
Bone gelee, yuzu leaf, toasted buckwheat
My dish of the night. With its intensity, the bone gelee took it nearly to the breaking point, but without stepping over. Instead, we enjoyed four slices of absolute heaven – I could not have tolerated more. 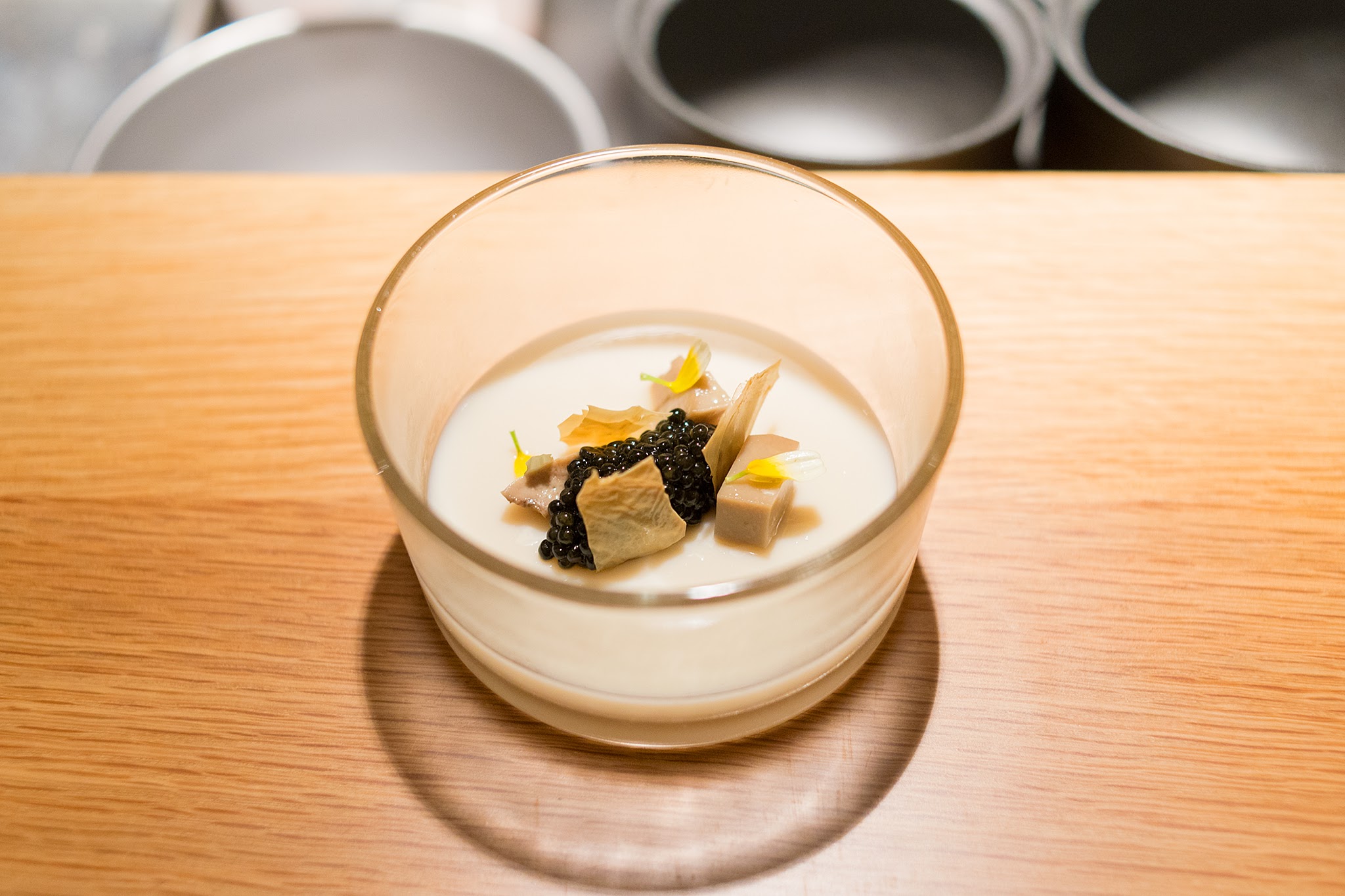 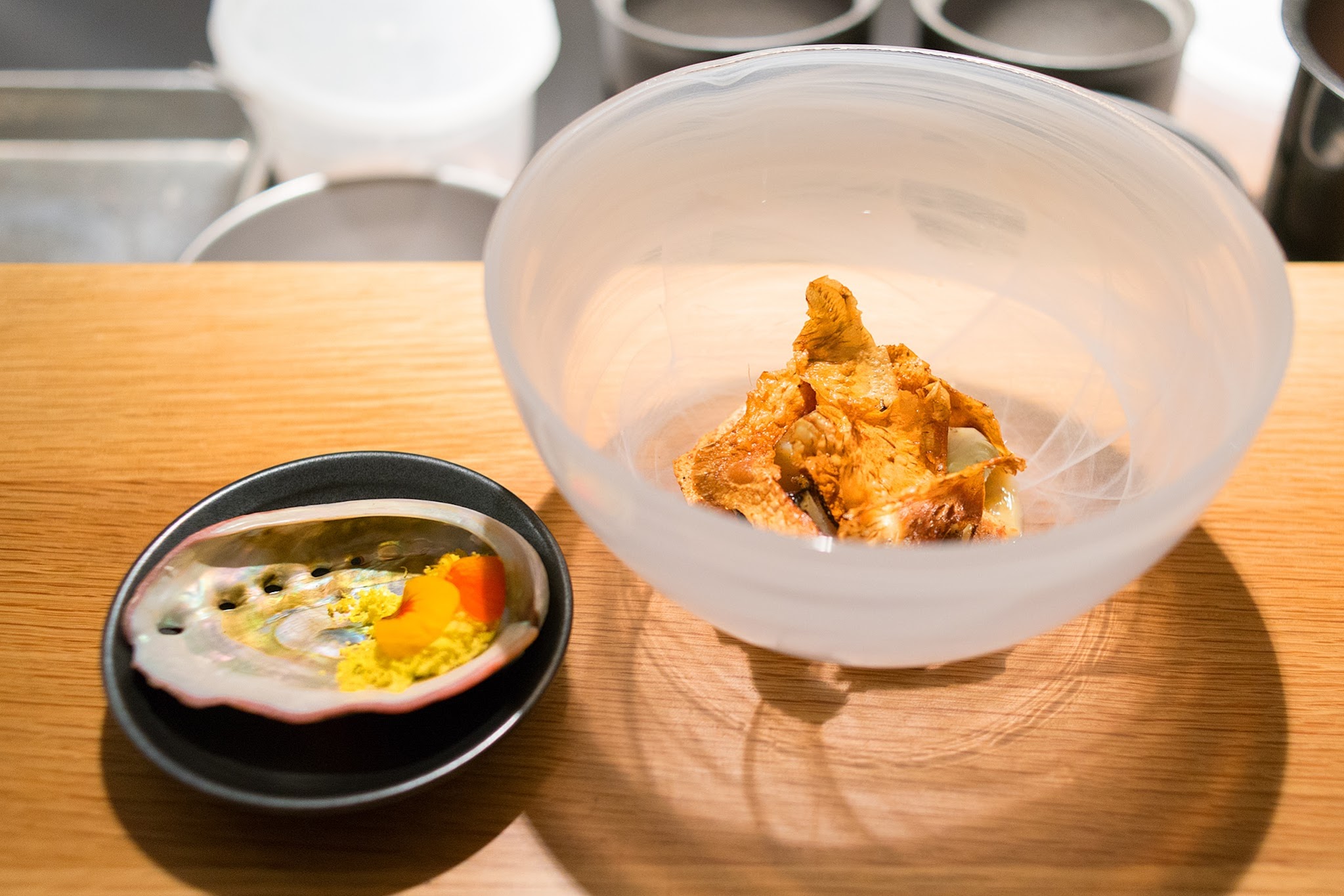 Brown rice porridge
Abalone, fermented artichokes, cured egg yolk
The slightly too toothsome porridge was topped with tender Monterey Bay abalone (really well prepared) and crisp artichoke chips. Shavings of cured egg yolk were ensconced in the abalone shell on the side. We were instructed to mix everything together before eating. A hearty, warming course. 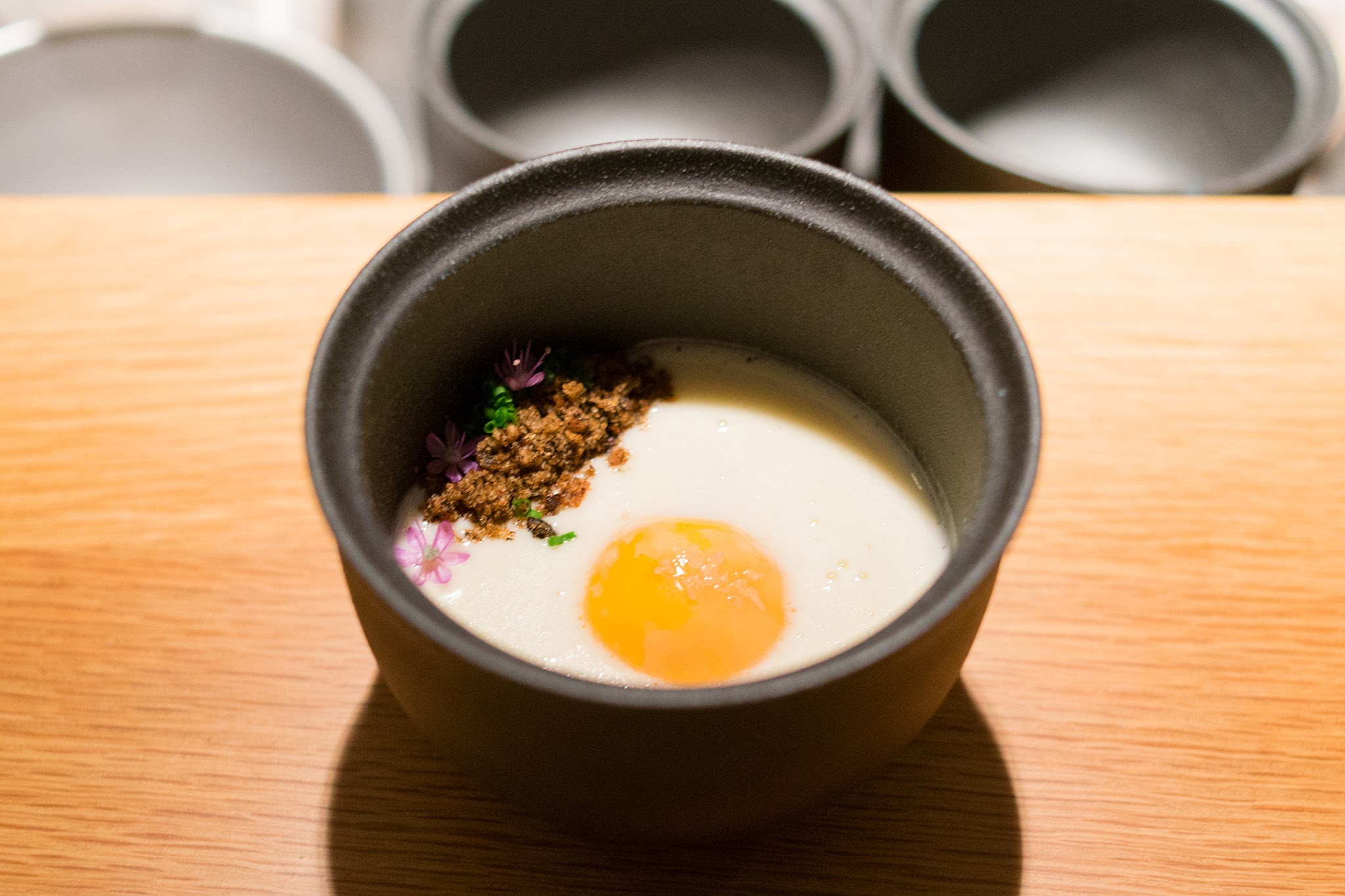 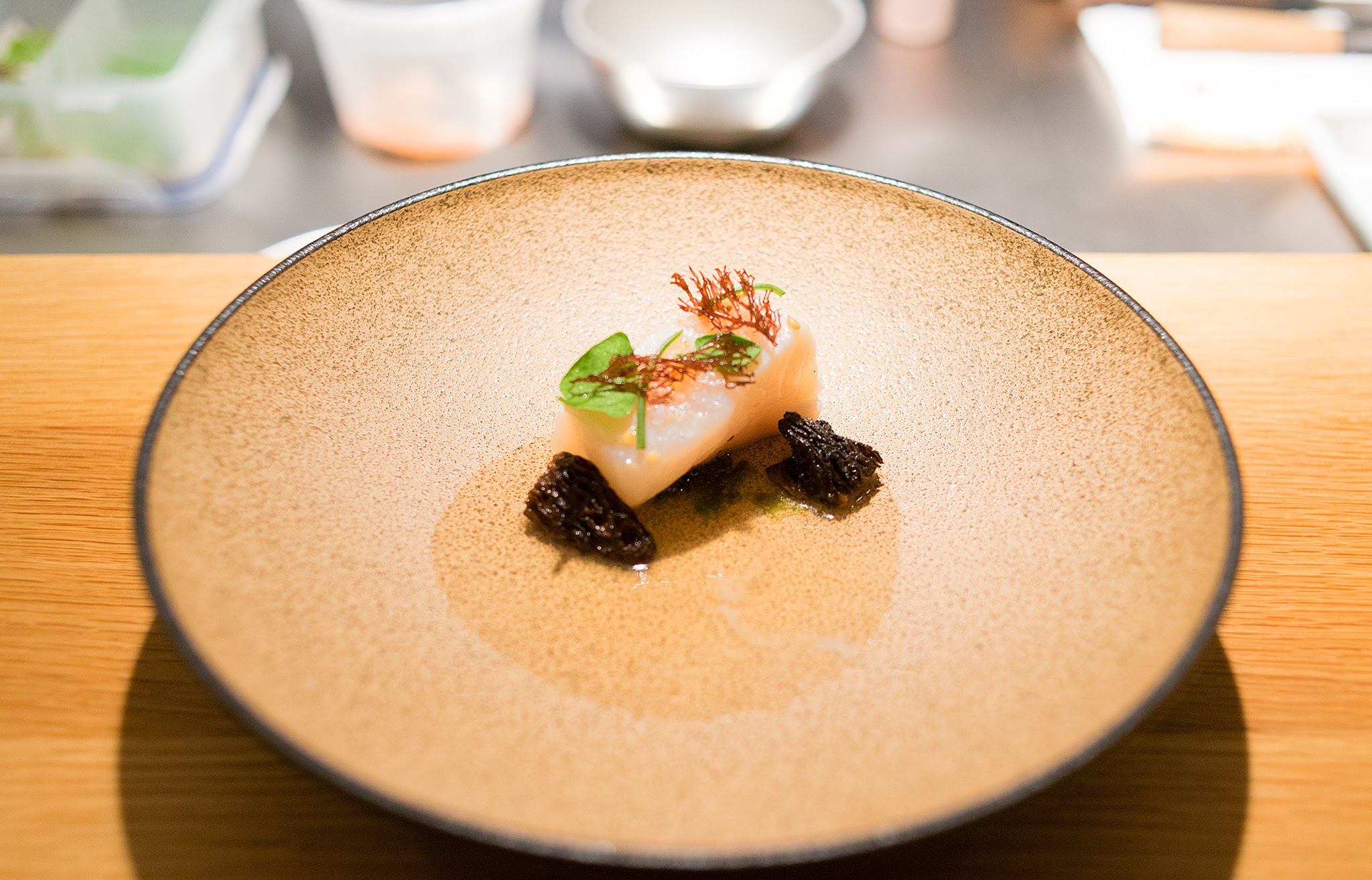 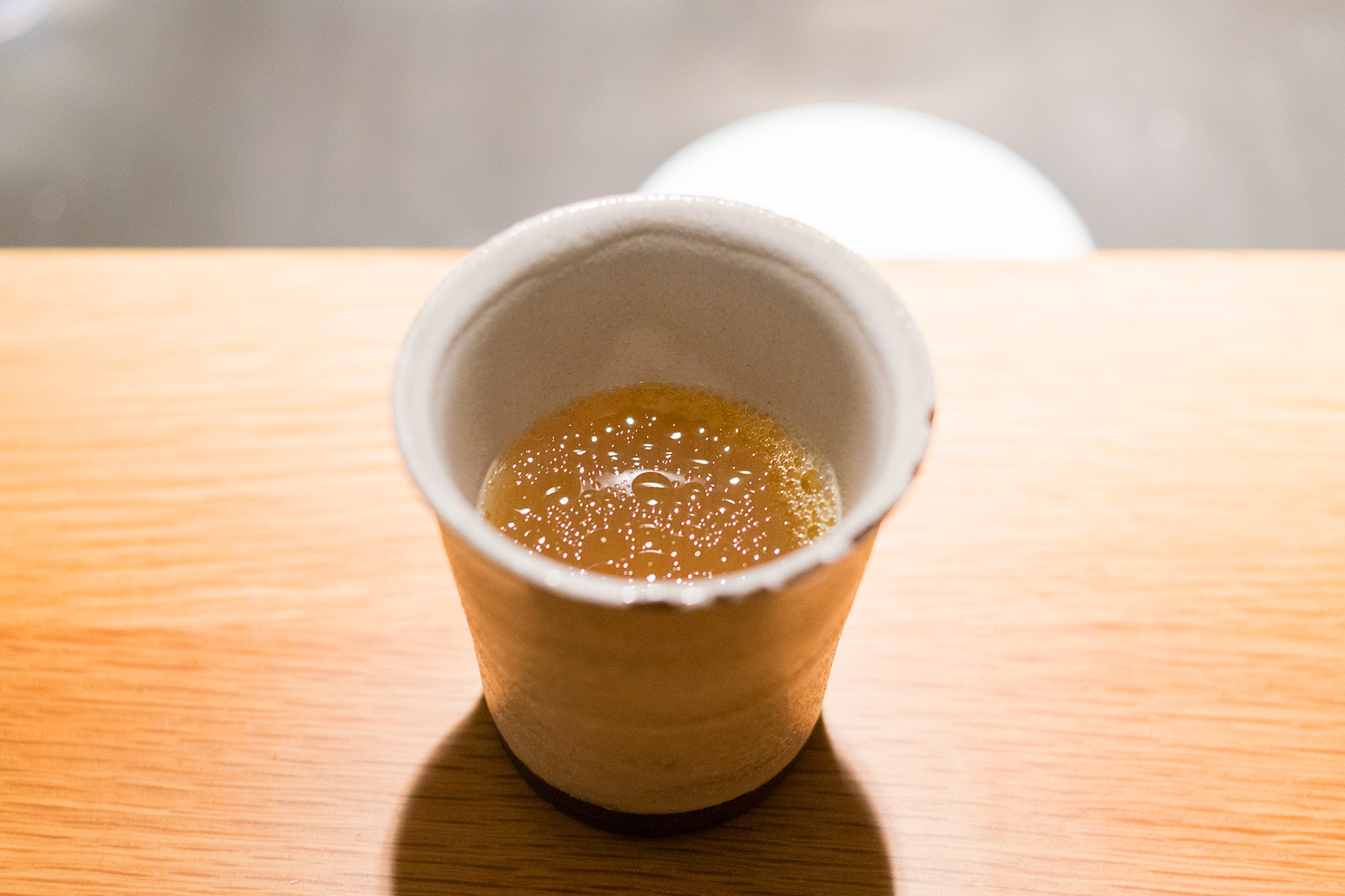 Warm chickpea broth, lemon peel oil
We had seen this cup precede the lamb course at other tables, and assumed it was the now ubiquitous “broth of bones”. What a pleasant surprise then, to find that this was a vegetable-based soup. It was very good, and shockingly rich – I wonder if they snuck some lamb in there? Impressive, regardless. 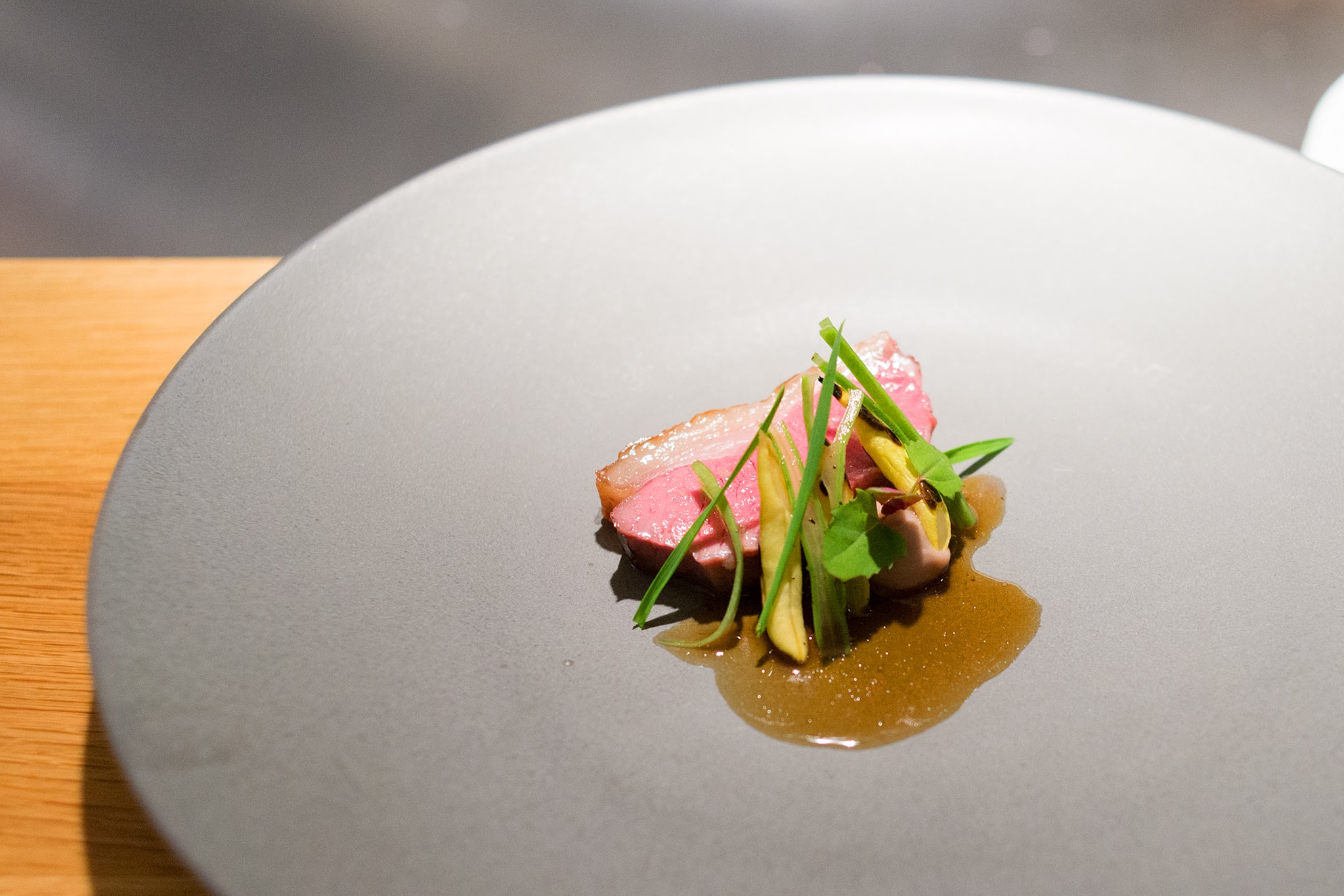 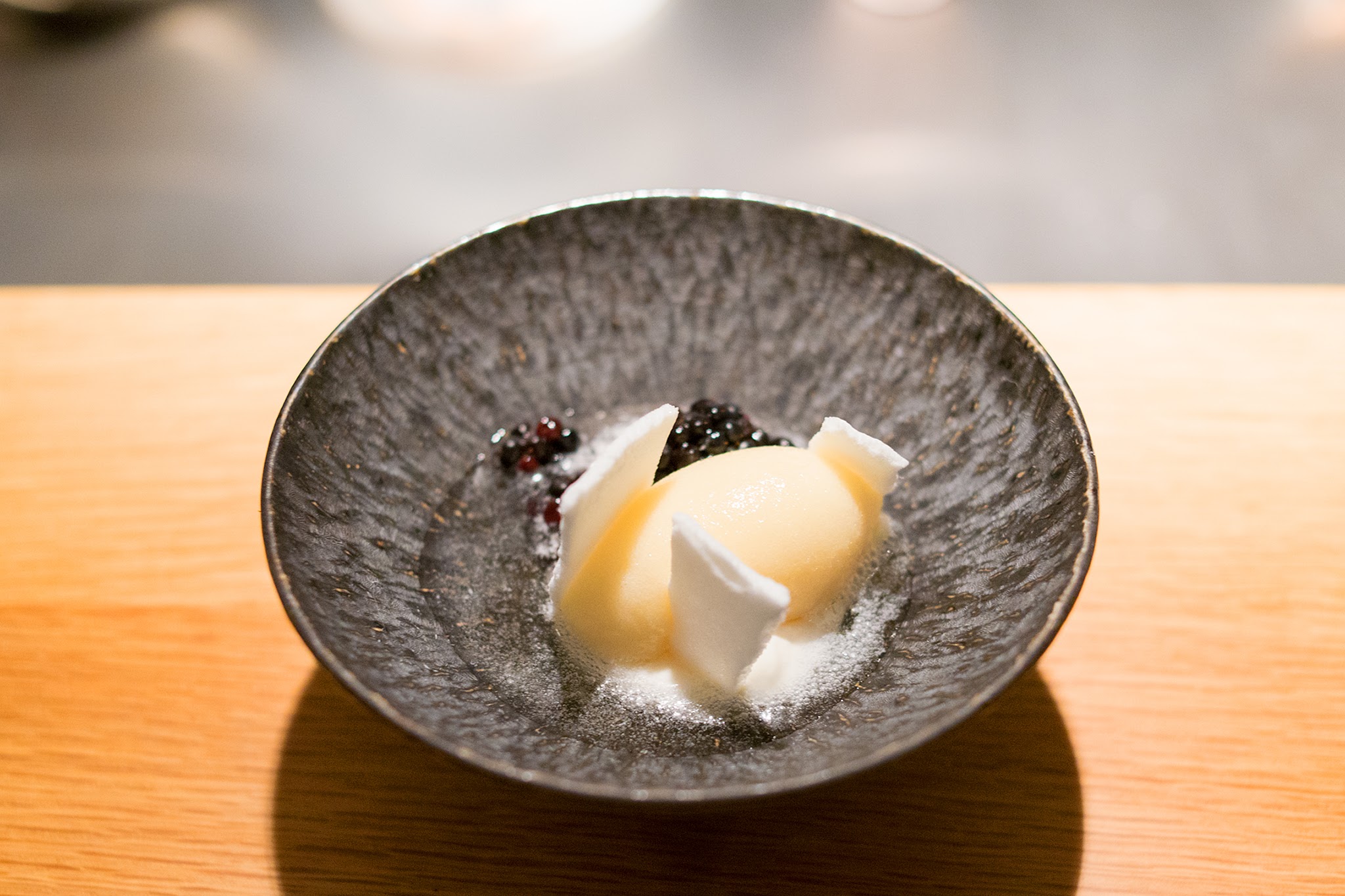 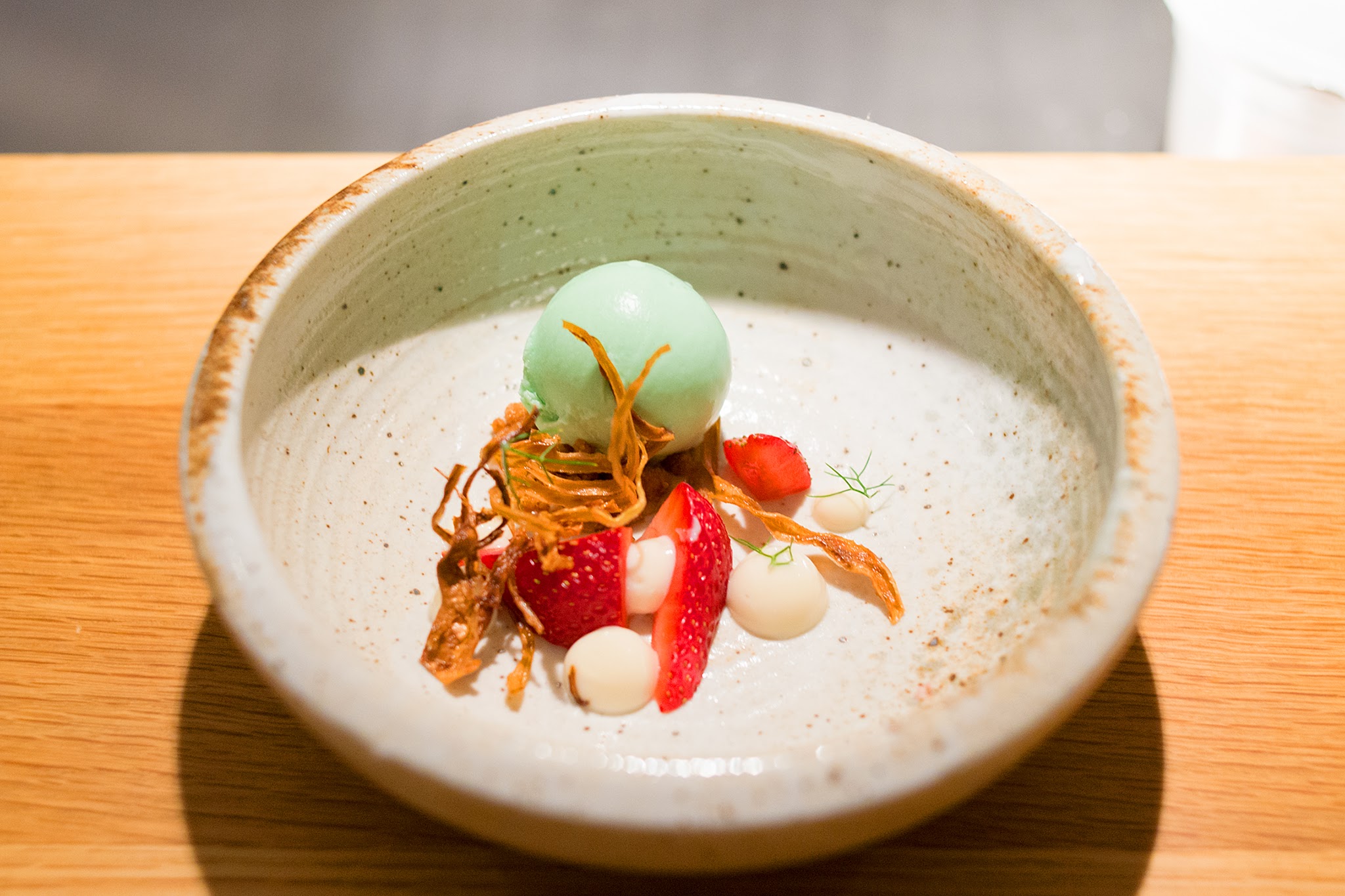 Strawberries, toasted almond, wild fennel ice cream
A terrific dessert that counterbalanced the sweetness of fruit and toasted almonds with the herbal notes of fennel. The fennel crisps, slightly sticky with their natural sugar, were highly addictive – they should bag and sell these. 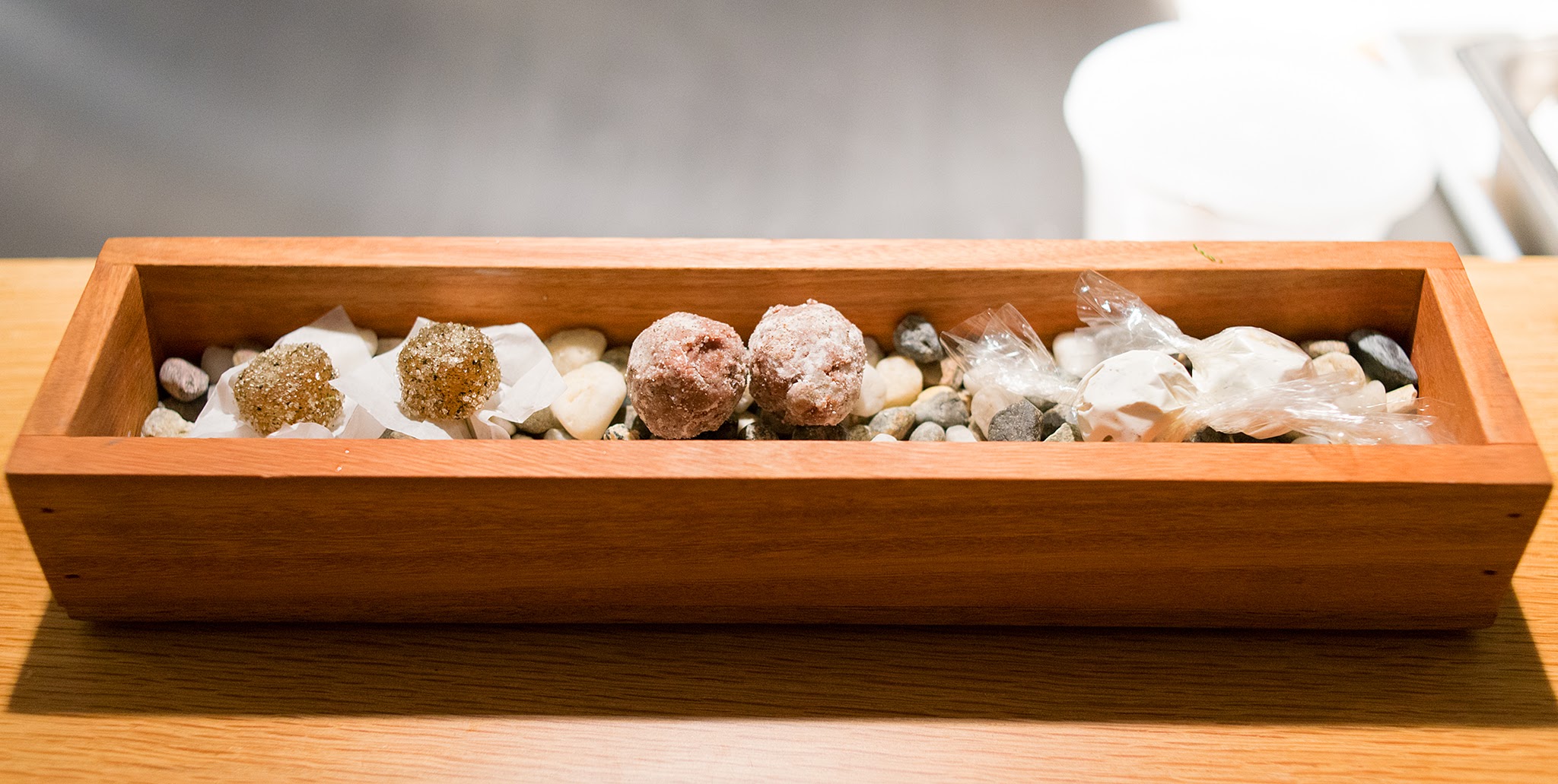 This was a seriously impressive meal, without any superfluous frills or flourishes. Creativity and the masterful use of umami (balance, always!) put this dinner within the top five of this year. To my mind, Commis bests the other 2-star restaurants in the city, at a price point much less dear. We will make it a point to return soon.