My greatest regret about our first (and thus far, only) visit to Mexico City in 2013 is that we were unable to dine at Pujol – it was closed for the duration of our vacation there. Subsequently, I followed the opening of Cosme with great anticipation, and we met Enrique Olvera (what a nice person!) at Galaxy Taco in San Diego shortly before we decamped for Northern California. Couple that with a well-timed James Beard Award for chef de cuisine Daniela Soto-Innes, and it was clear that we had to eat at Cosme, but I was sincerely worried – would it live up to all the hype? 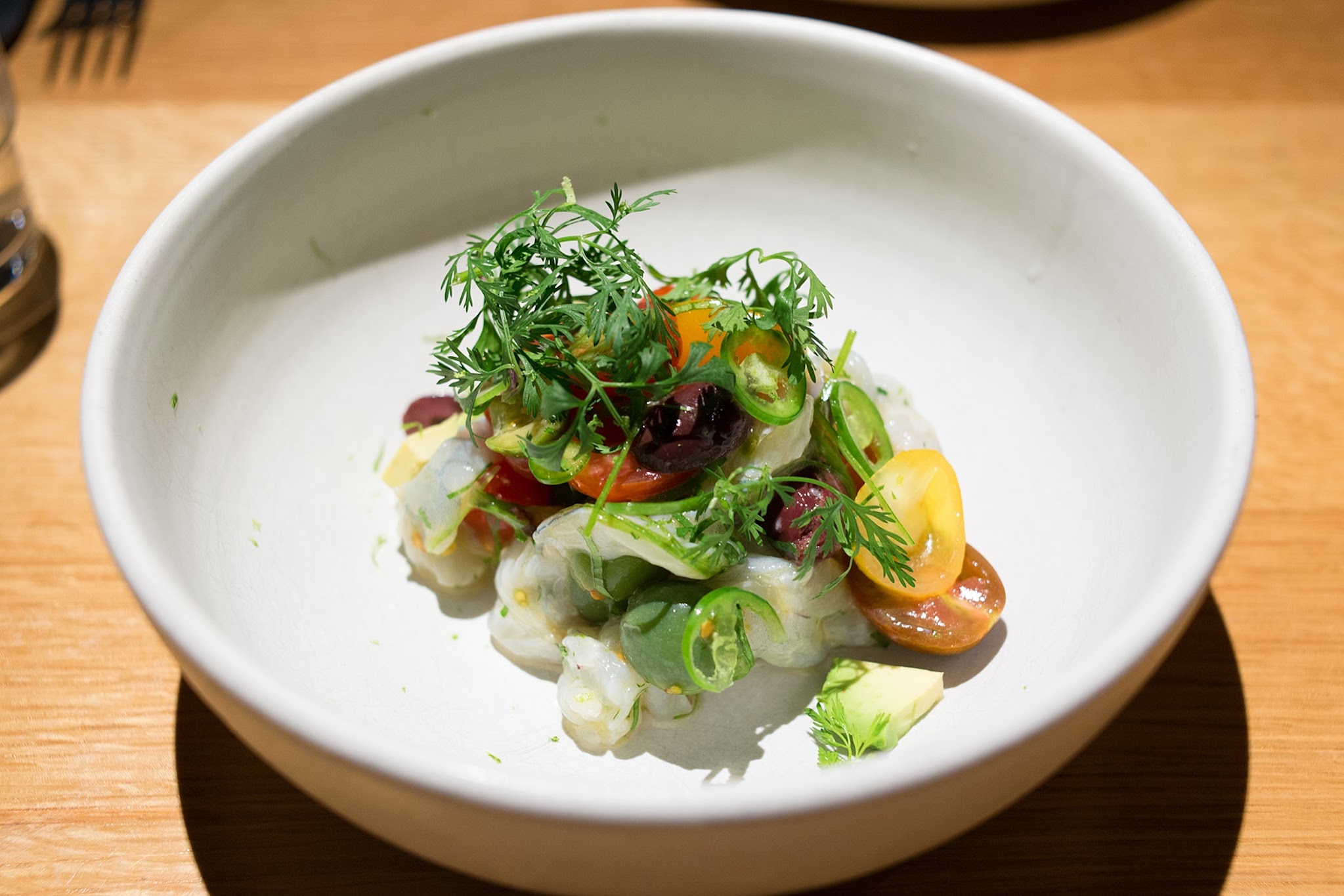 Blue shrimp a la Veracruzana
Olives, garlic oil, avocado
This was so acidic, it made my mouth pucker, and yet the flavour and texture of the shrimp were well-preserved. I loved how the garlic oil and avocado balanced out the sourness of the marinade – a great start. 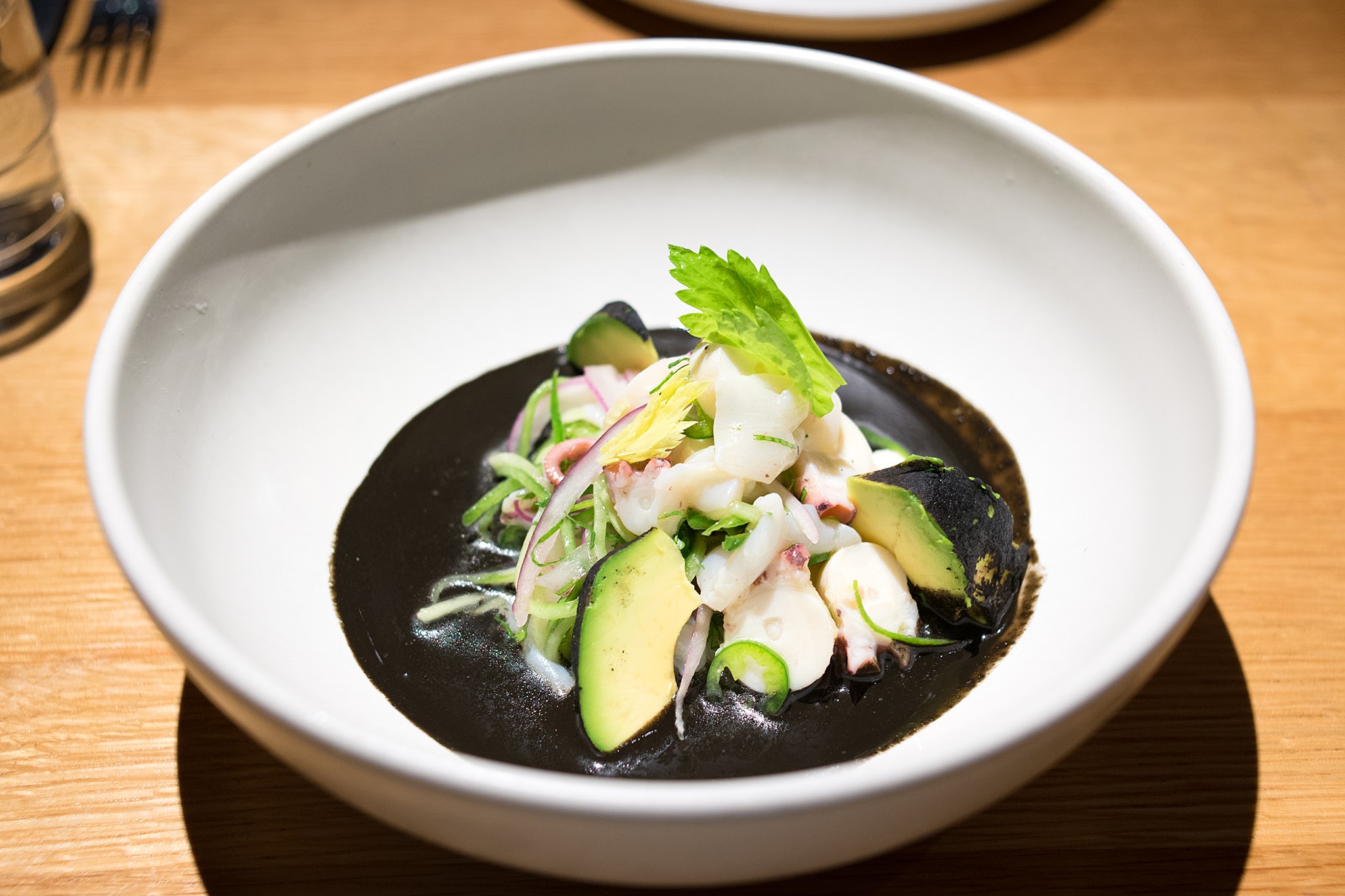 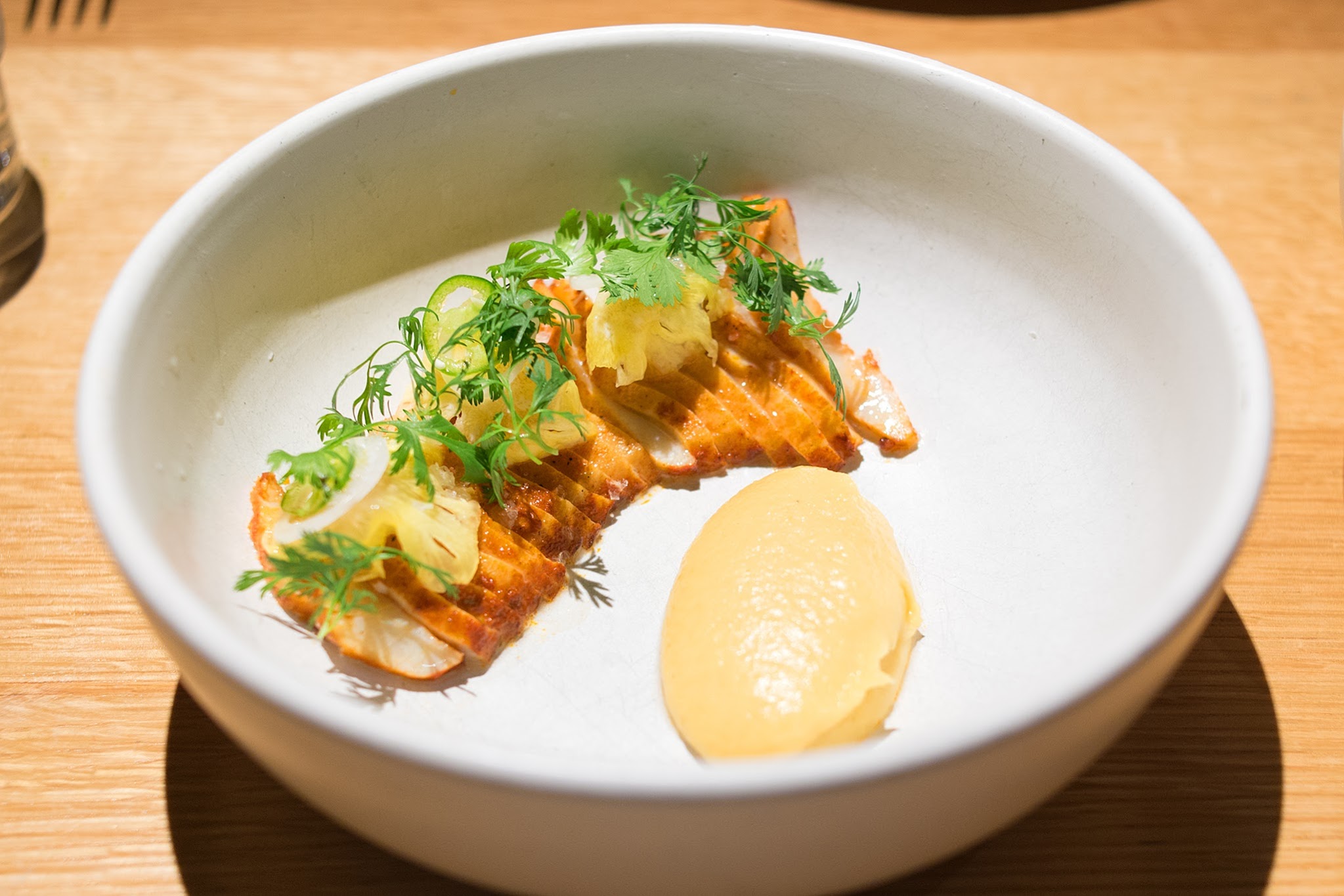 Cobia al pastor
One of my favourites of the evening – the fish was just so well-cooked. The pineapple puree had the precise amount of sugar necessary to balance the salt from the pastor marinade, without going overboard. 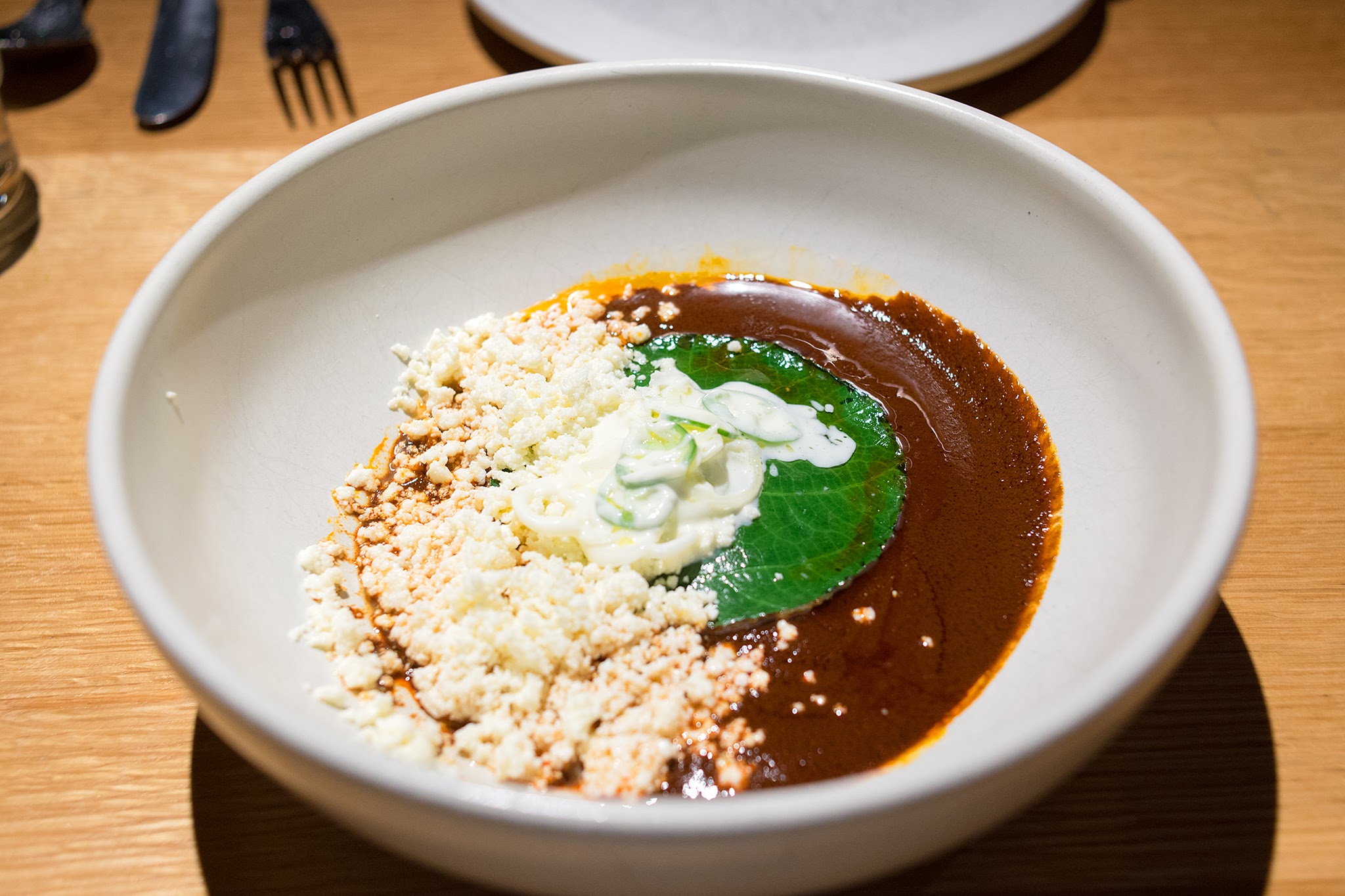 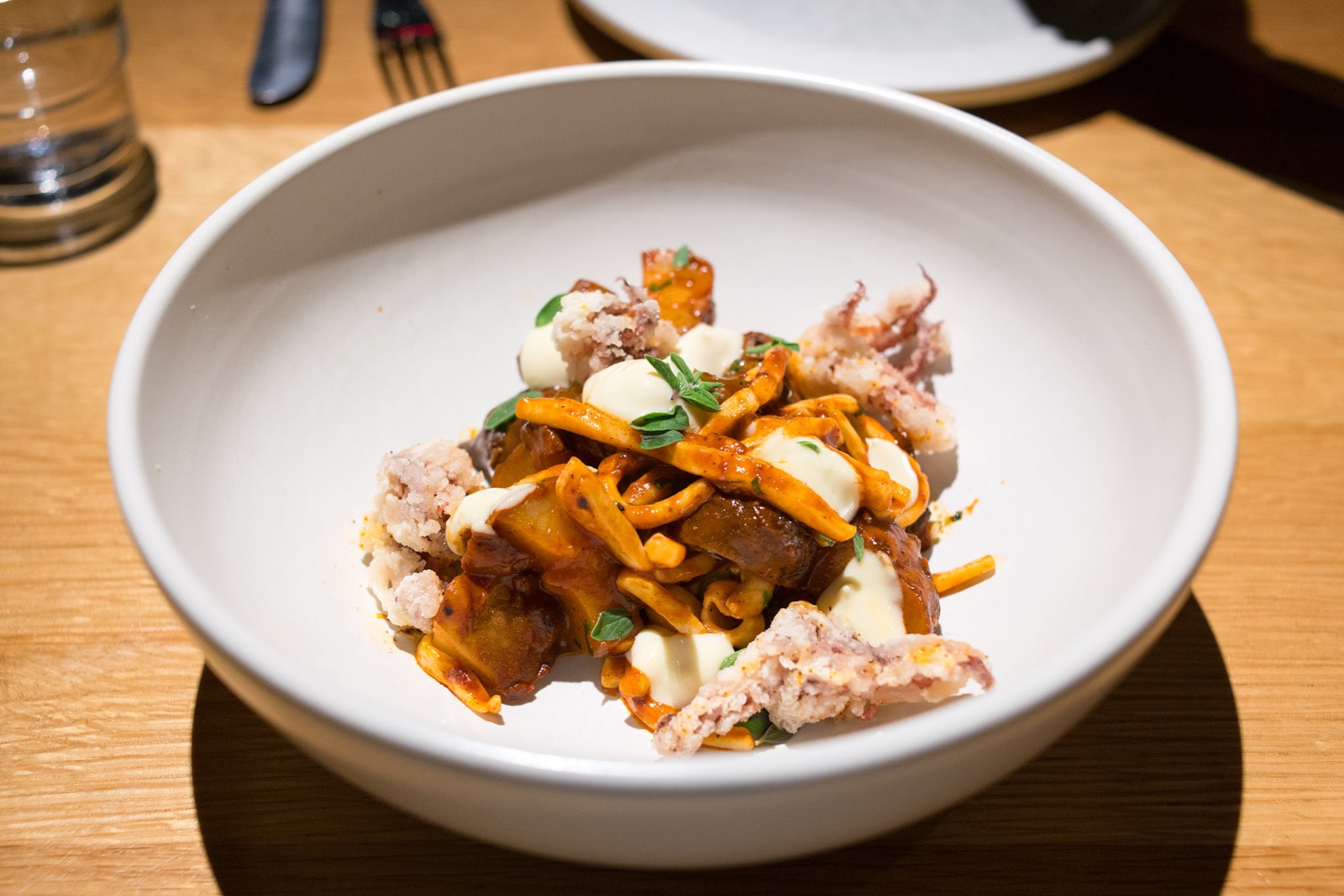 Calamari
Sunchoke, adobo, aioli, oregano
The squid, cooked in two ways, was alternatingly crisp, tender and firm – a real textural treat. Earthy chunks of sunchokes worked unexpectedly well with the mollusc. The garlic-heavy aioli balanced the heat from the paprika in the adobo. Fantastic. 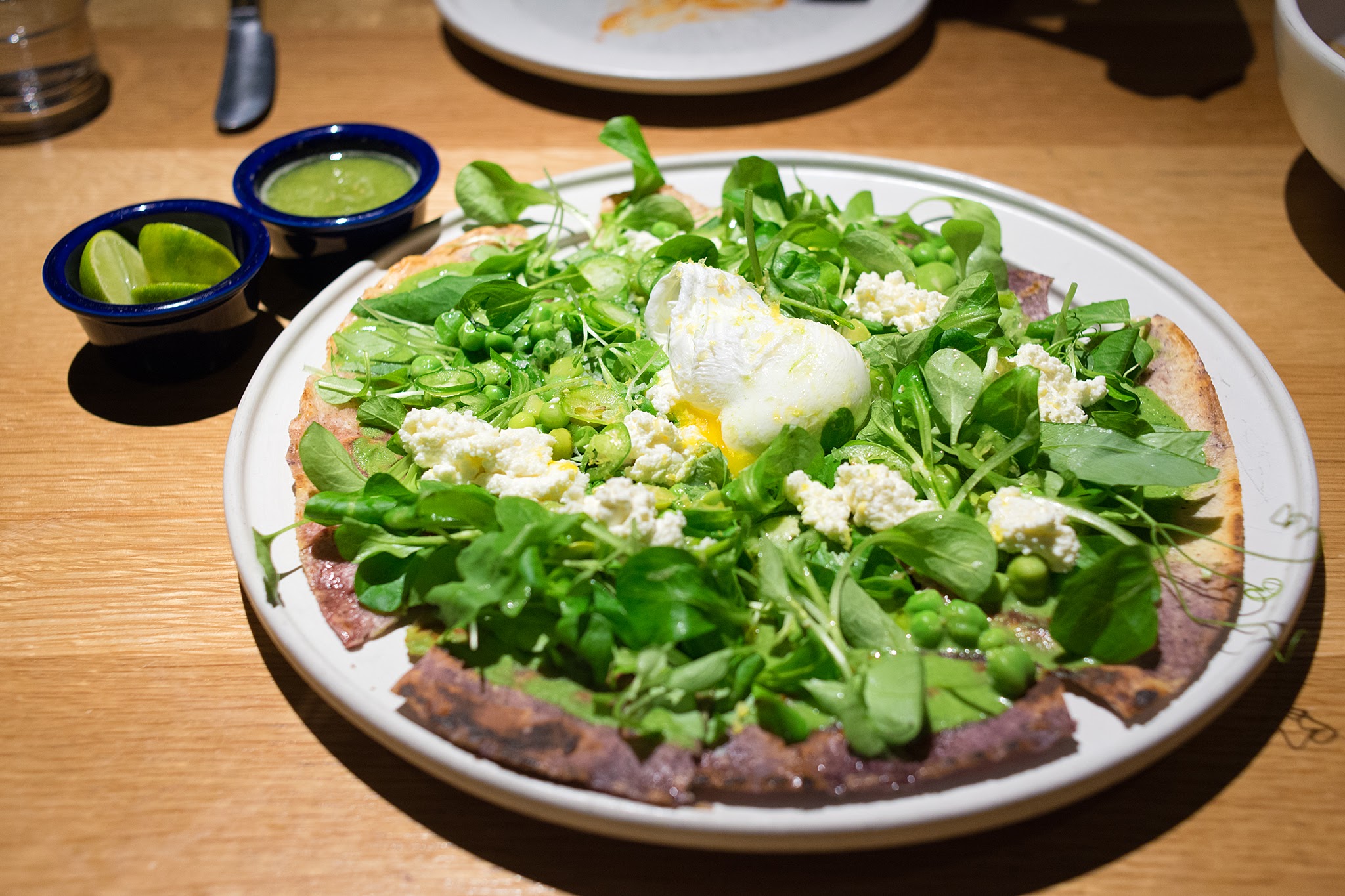 Tlayuda
Fava bean puree, farmer’s cheese, peas, soft egg
This traditional Oaxacan flatbread, made with a crisp tortilla base, was topped with decidedly non-traditional ingredients. The soft cheese and runny egg yolk, together with the greens and a hit of salsa verde, were a winning combination. 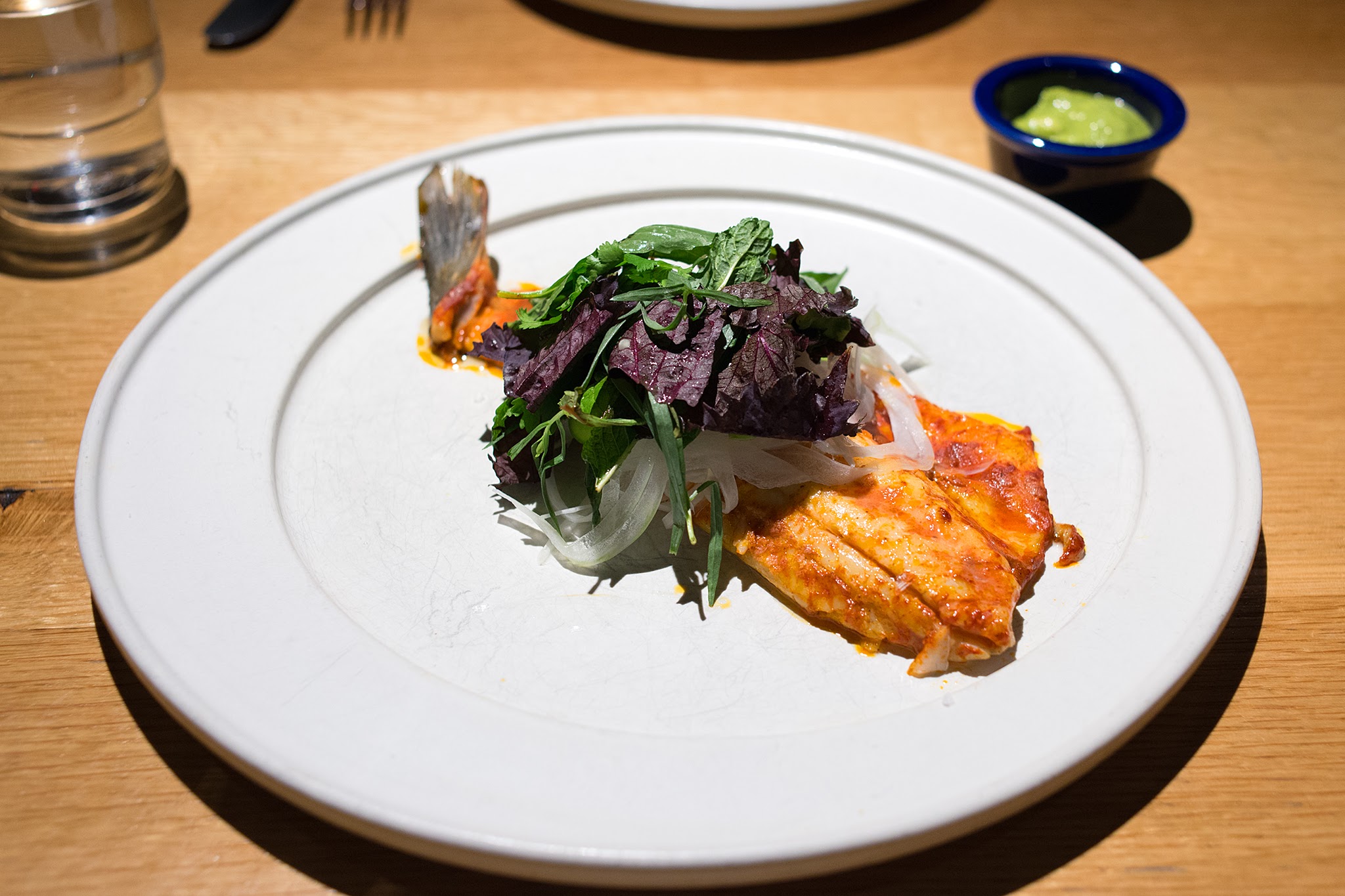 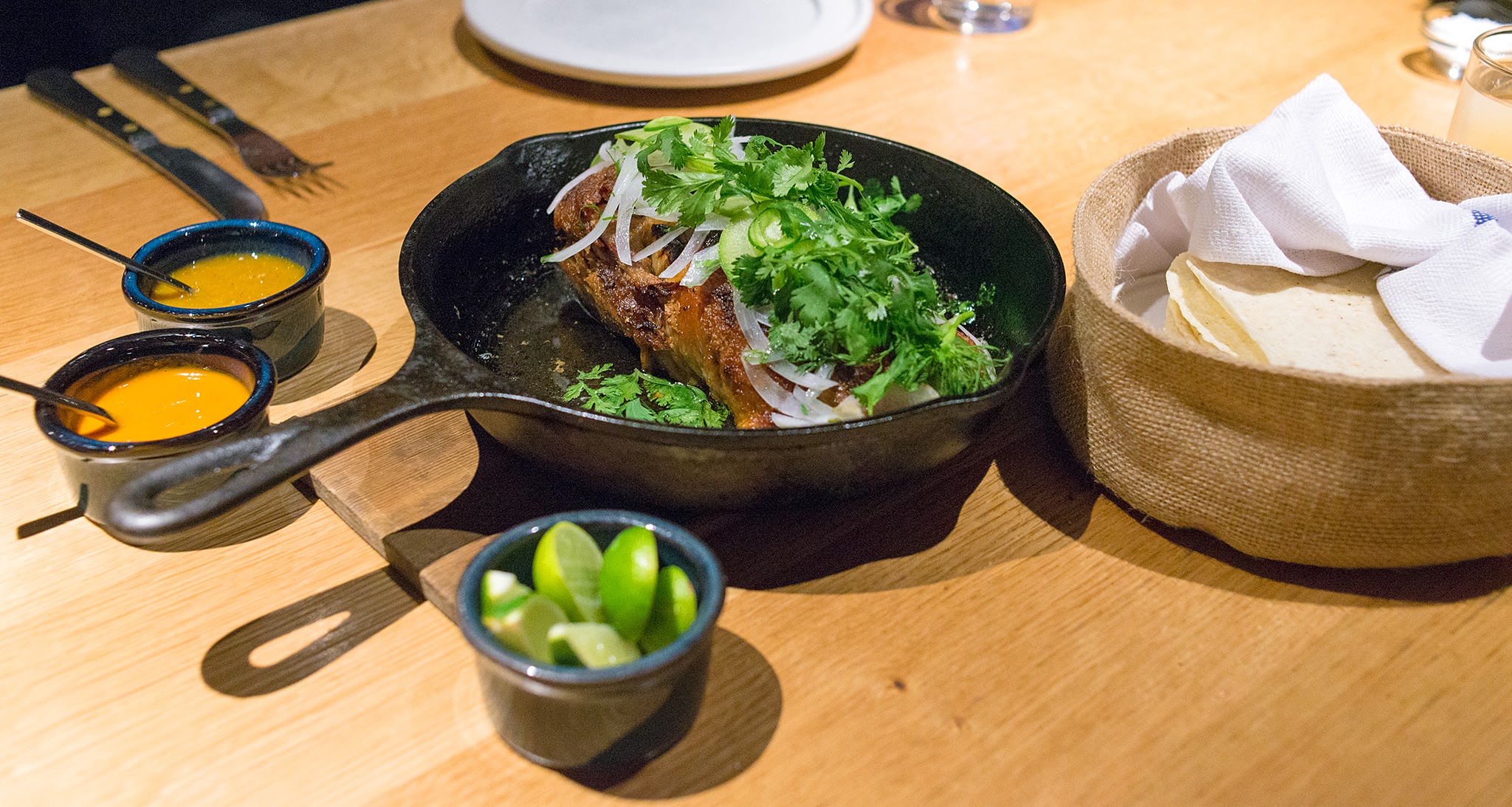 Duck carnitas, fresh tortillas
The piece de resistance – half a duck, with meltingly tender flesh, presented in a cast iron skillet with house-made tortillas and salsas on the side. The duck  had been cooked in a complex sauce which apparently involved Coke and condensed milk – the individual ingredients were not evident, instead melding into a cohesive profile. Another standout was the chile de arbol salsa – I wish I could get it bottled. 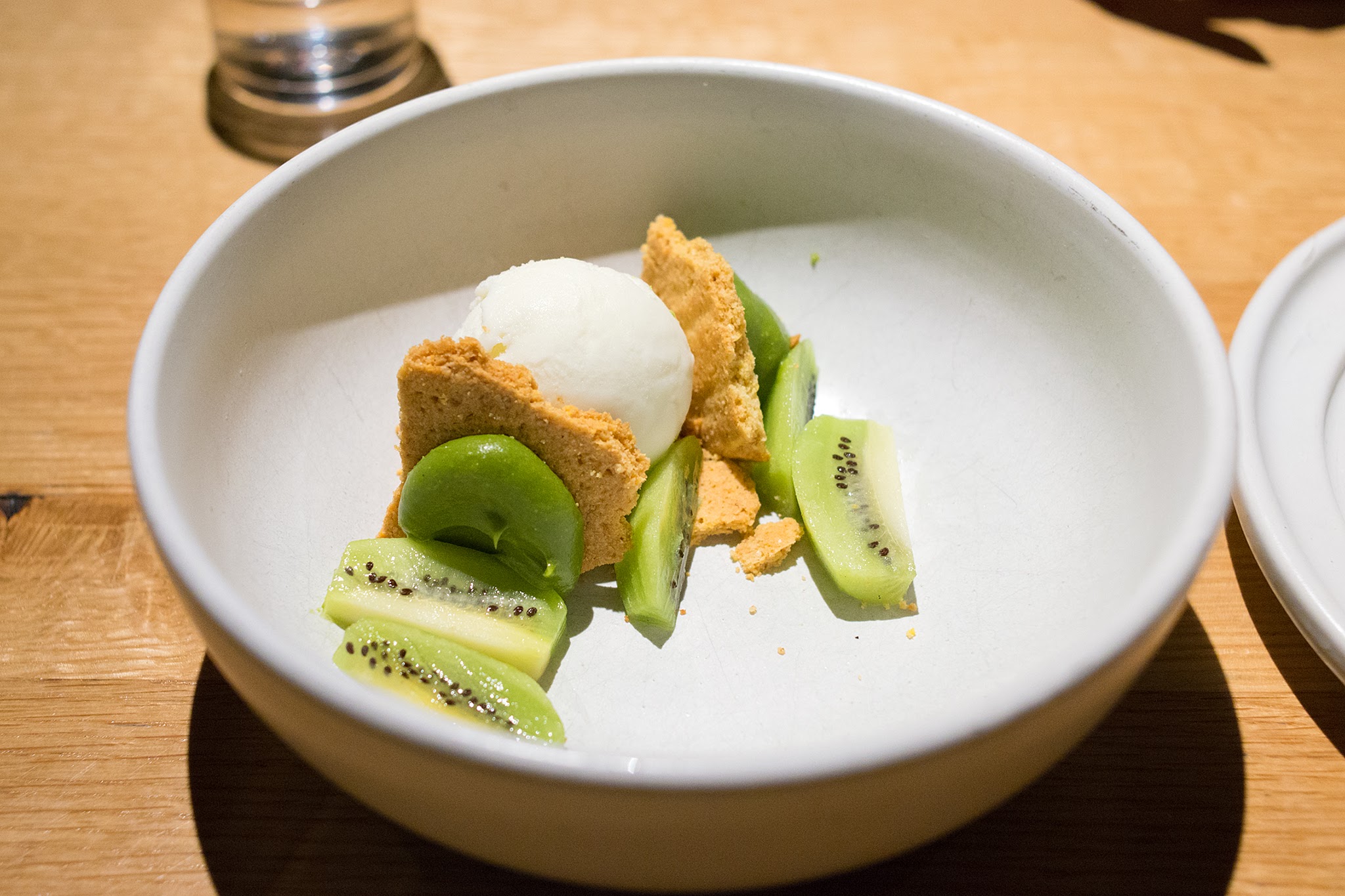 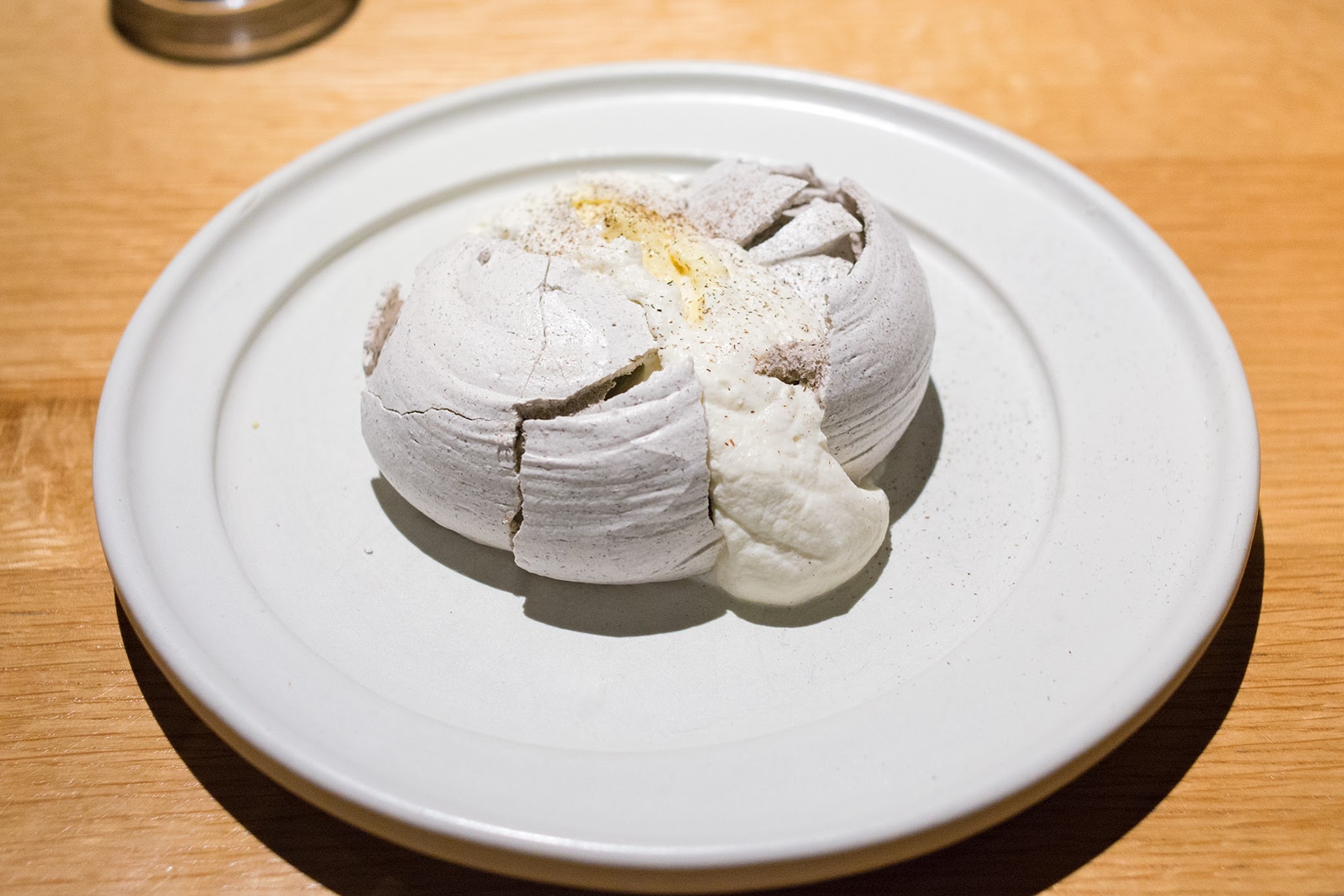 Husk meringue, corn mousse, burnt vanilla
A dessert that has already gained signature status – this really was as good as reputed. A masterpiece of textures, capturing the essence of corn. 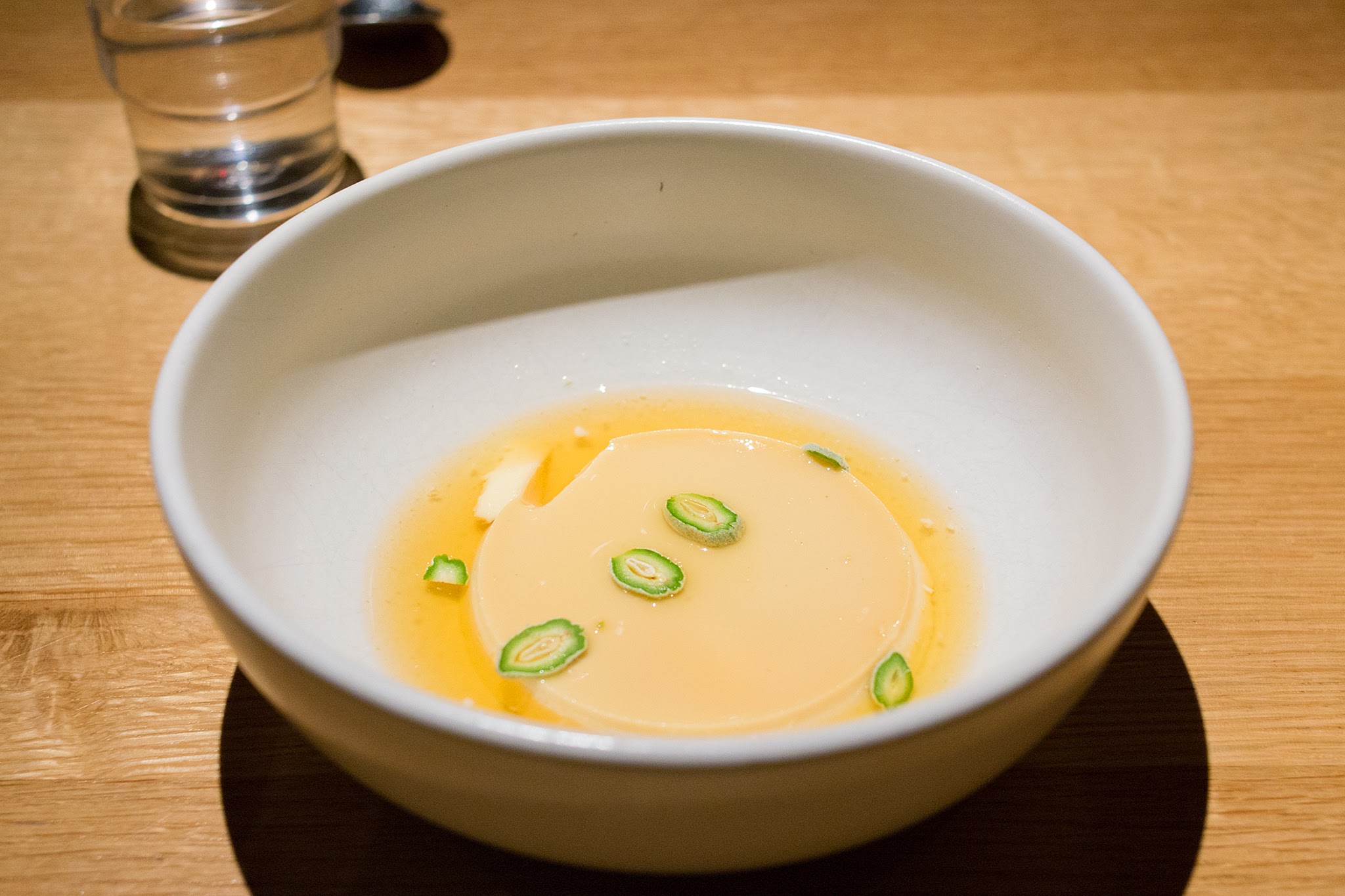 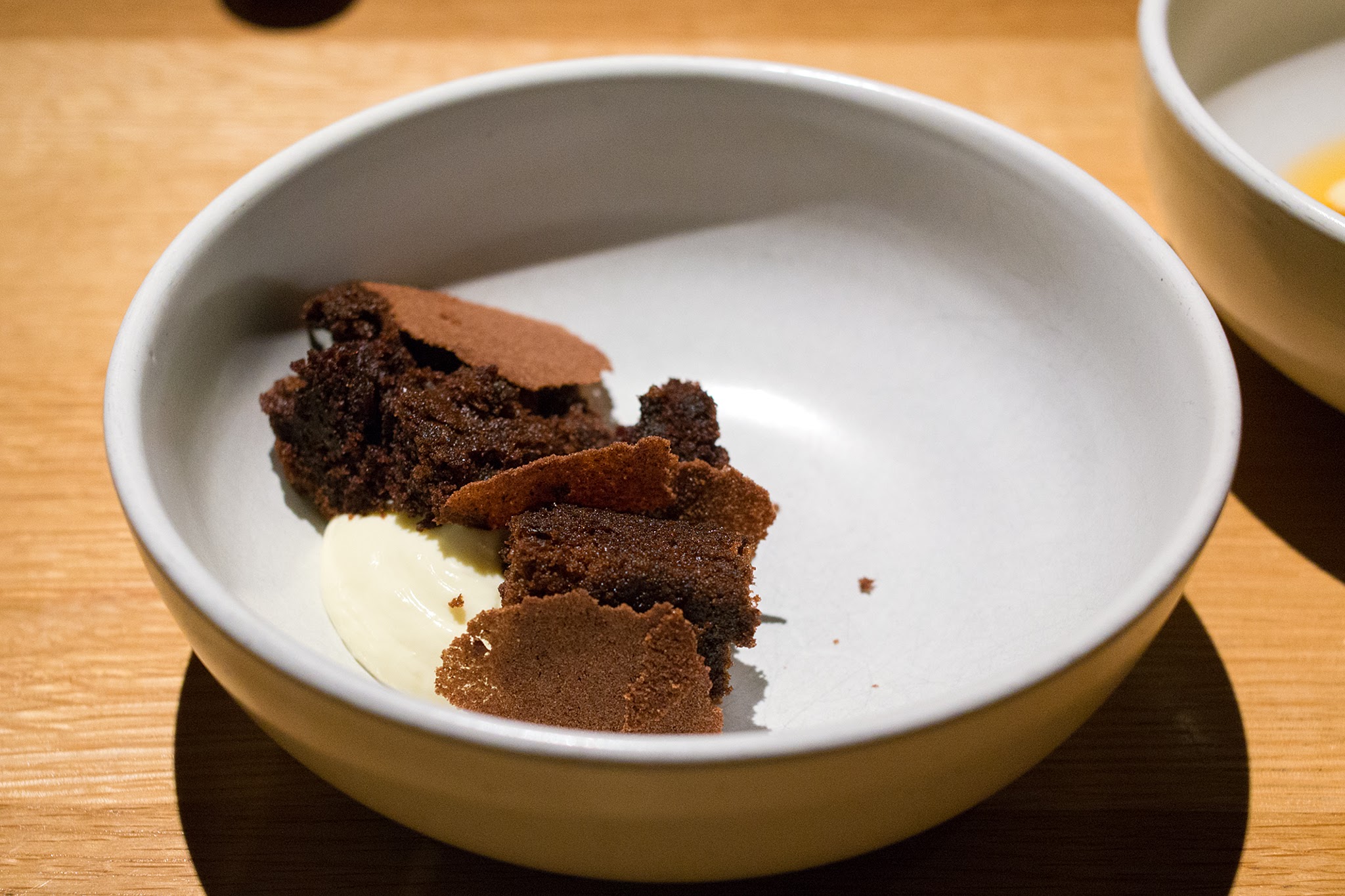 About halfway through dinner, a waiter spilled an entire container of salsa verde halfway down my back (which, by the way, accounts for the salvo of desserts above – they were comped). Yet, even this messy accident did not detract from a truly impressive meal – it fully lived up to expectations. The kitchen has done a bang-up job with their refined interpretations of regional Mexican cooking, and more eclectic elements are cleverly mixed into the menu without seeming alien. I’m sufficiently motivated to consider planning another trip south of the border.