Alex Stupak doesn’t know me, but I am a fan – from his days as the opening pastry chef at Alinea, to WD-50, and now Empellon. It’s been over 6 years since I’ve had any of his food, and he no longer dwells on desserts, but his talent abounds. As it stands, his regular menu was (to be quite honest) not a priority for us, but the year-old Kitchen Table at Empellon Cocina had our names on it. The tasting is “heavily inspired by Mexico as well as the personal backgrounds of the kitchen team”. Unfortunately, he was not in the house on this night, but his team made sure we had a rollicking good time. 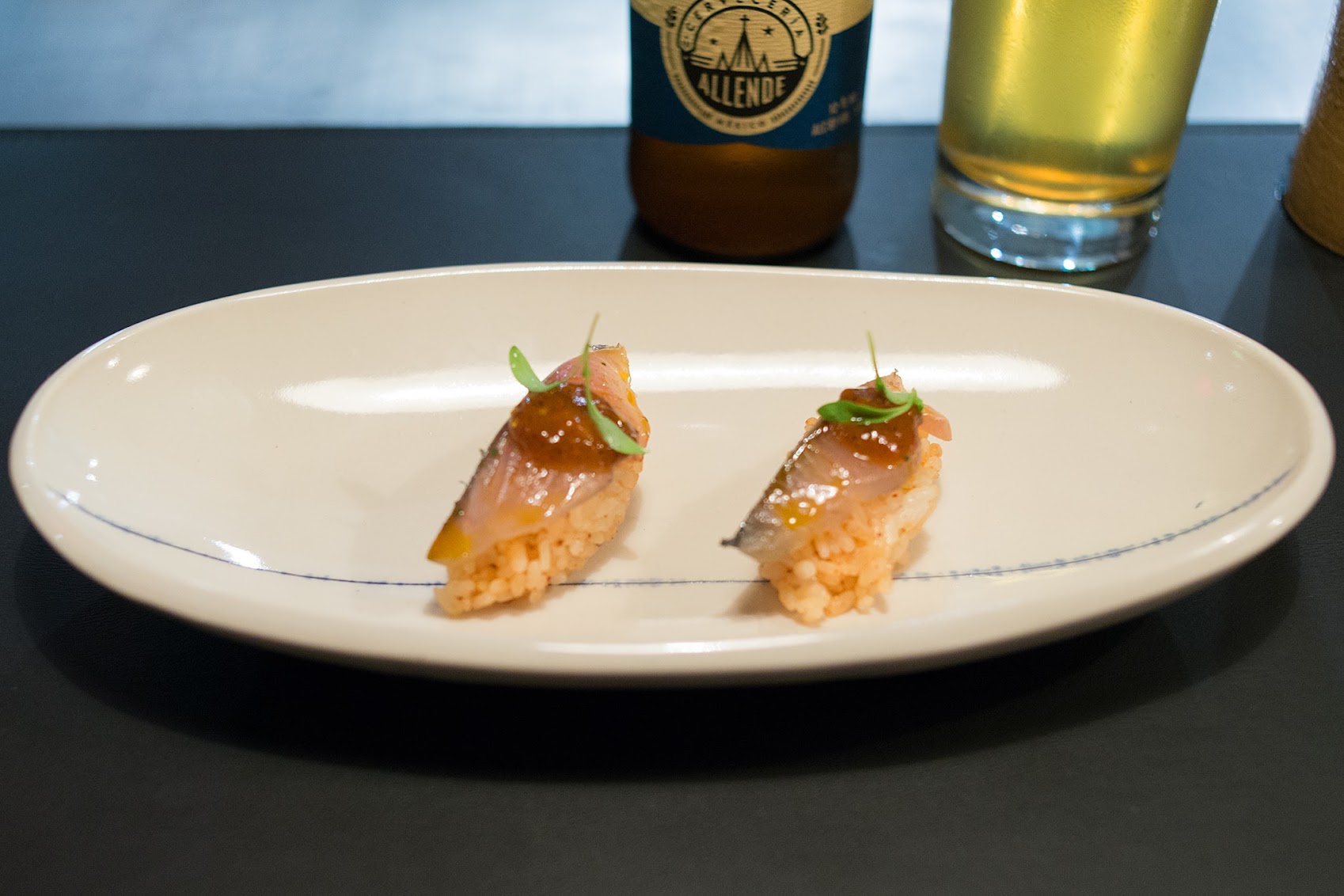 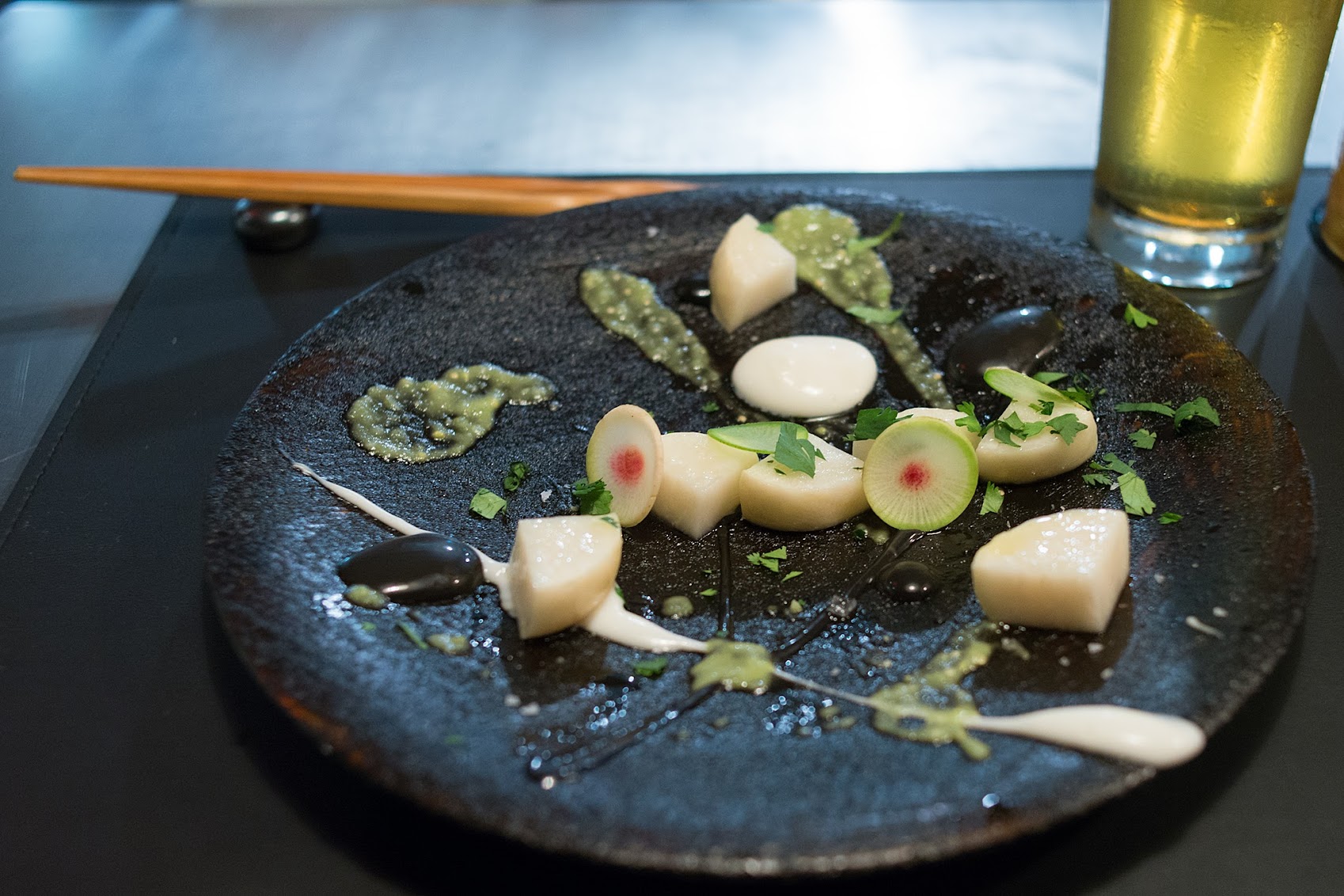 Turnips and radishes
Salsa verde, chilmole, coconut crema
The white plate had been painted over with chilmole, the Yucatan strain of black mole, and dried – very visually striking. The dried sauce reconstituted naturally as we dragged the other components over it, imparting a slow burn from the chiles, which was in turn cooled by the coconut crema. A really great dish. 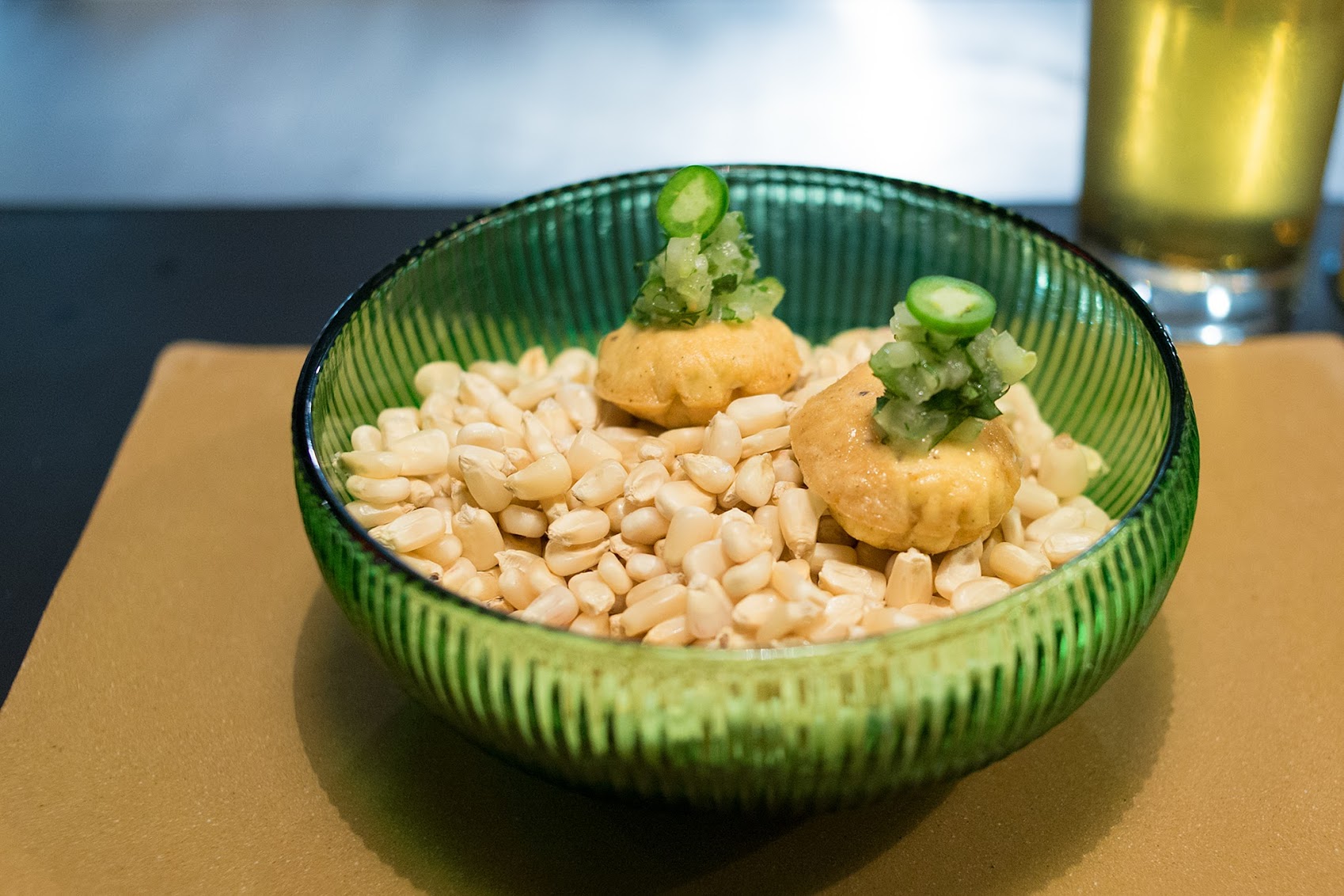 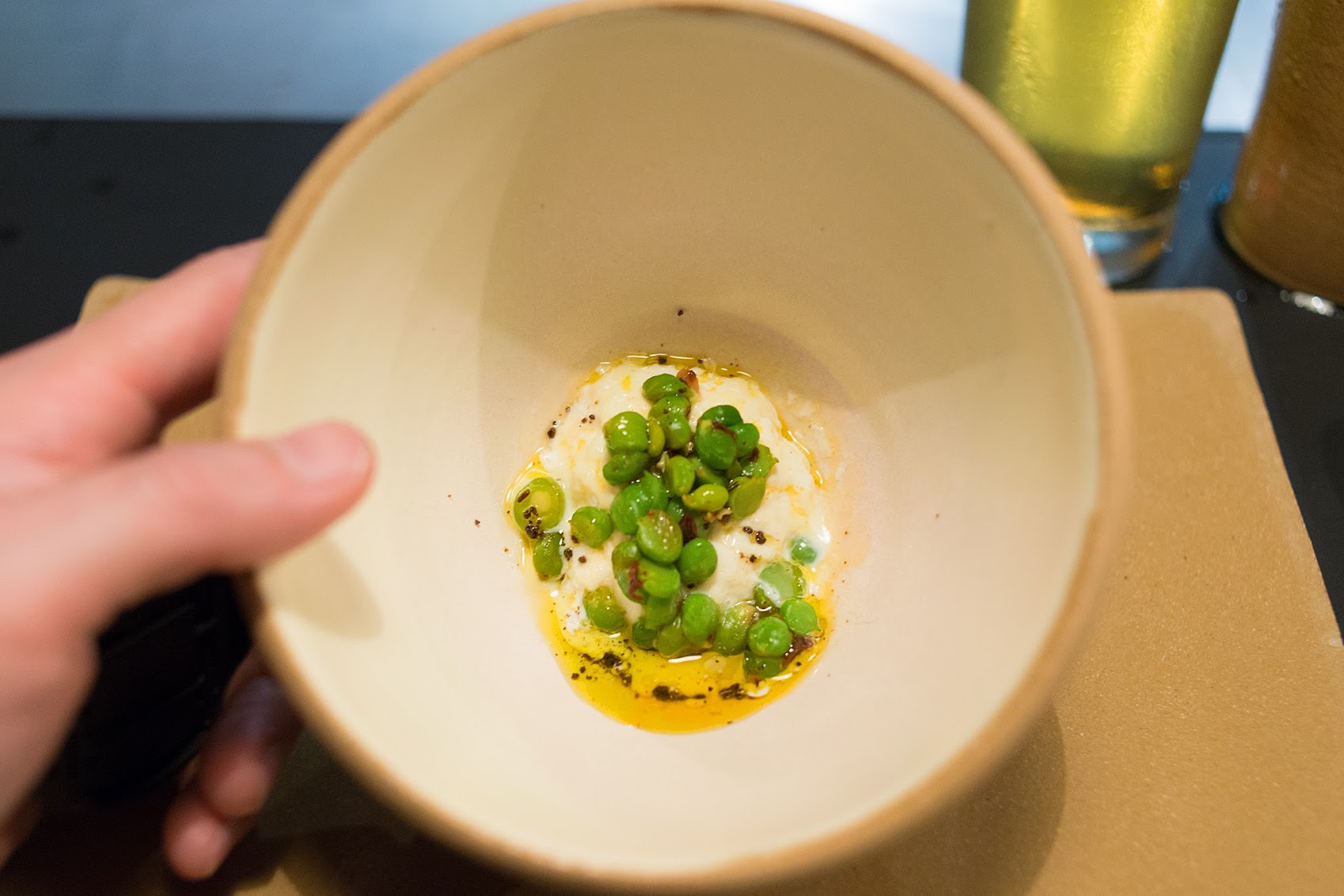 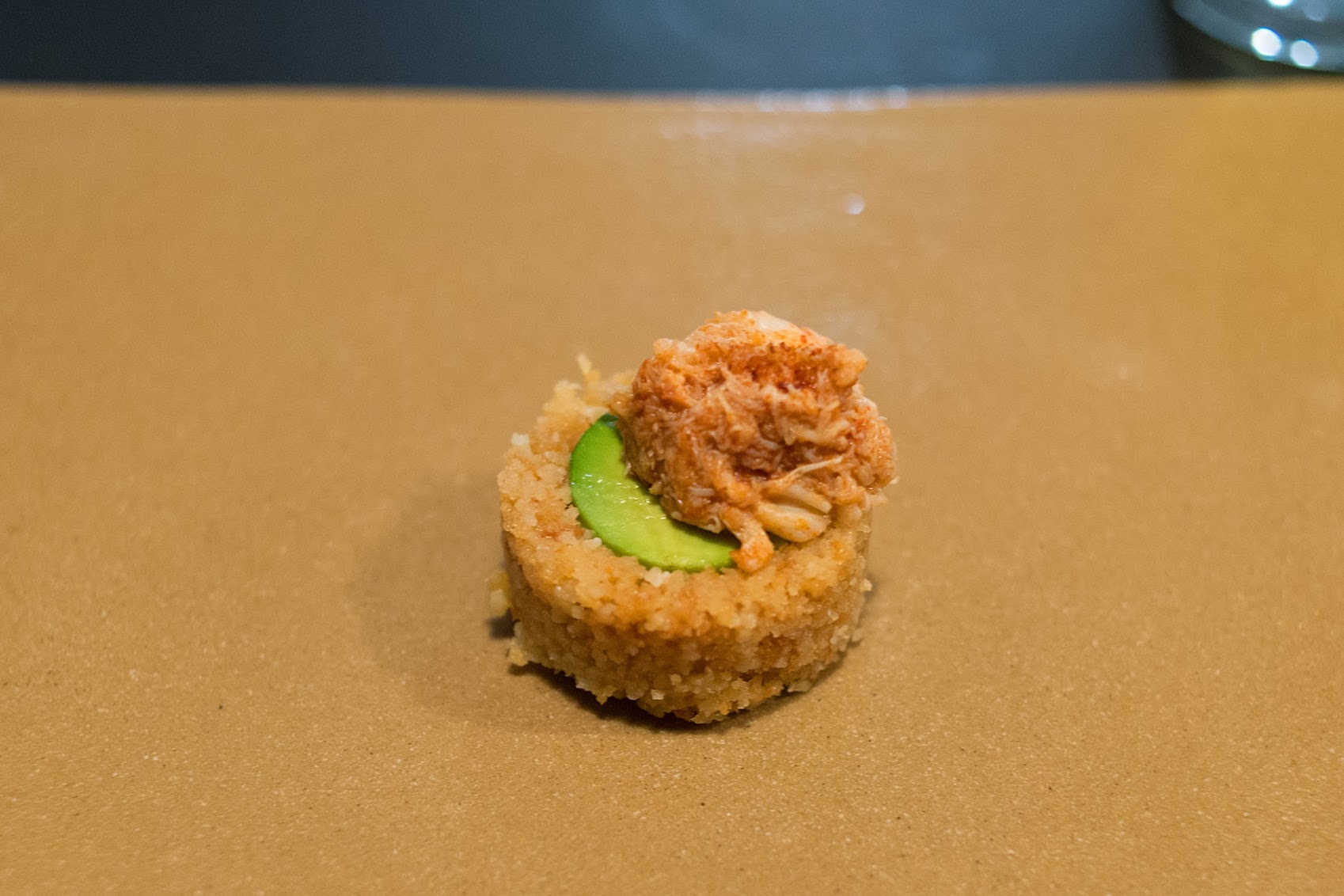 Trout flautas, salsa verde
My top bite of the evening used ocean trout in a few different preparations. The skin was fried to create the flauta, which was stuffed with a tartare of the flesh. This was topped with trout roe and shredded cabbage. Relatively straightforward, but absolutely bursting with flavour. 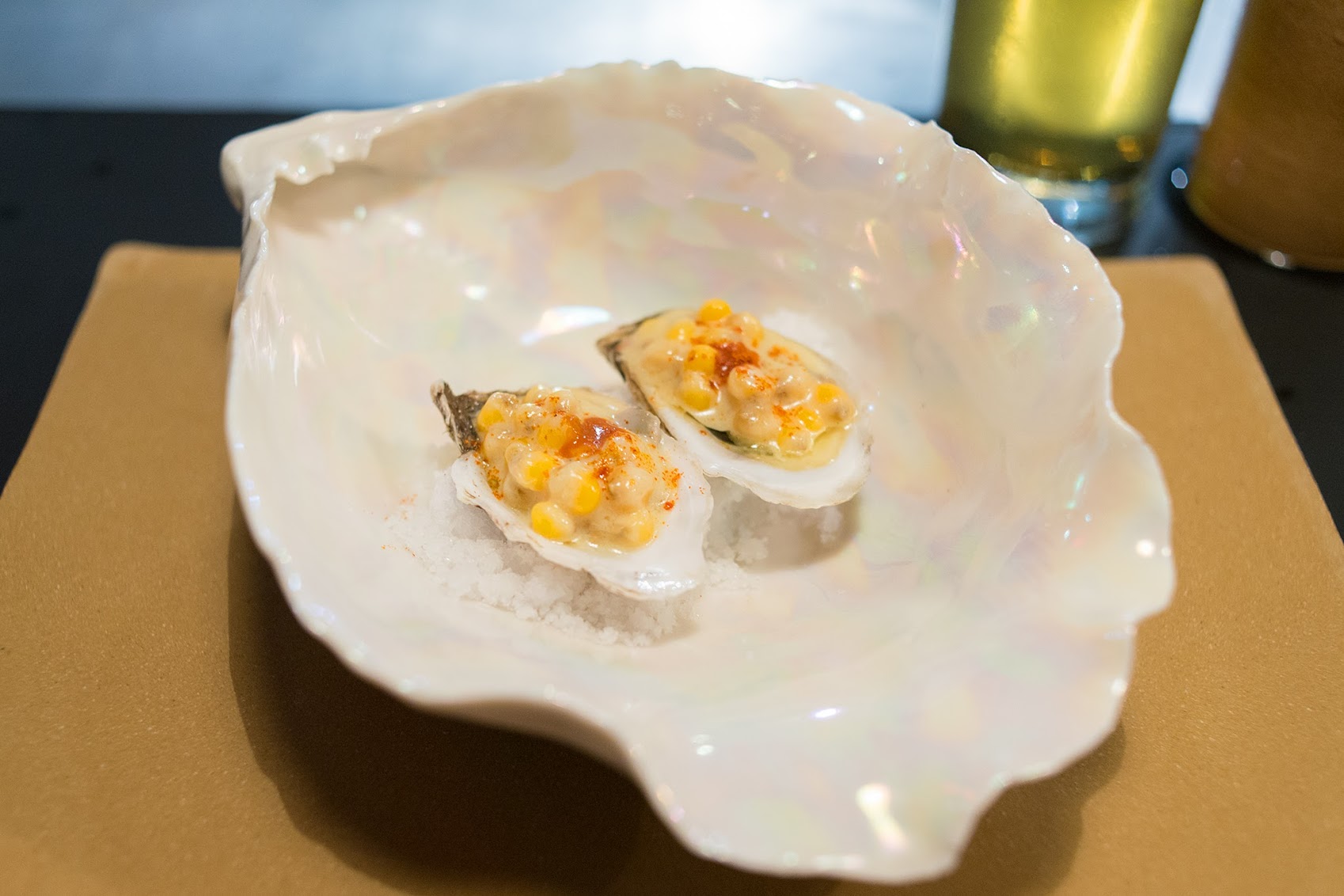 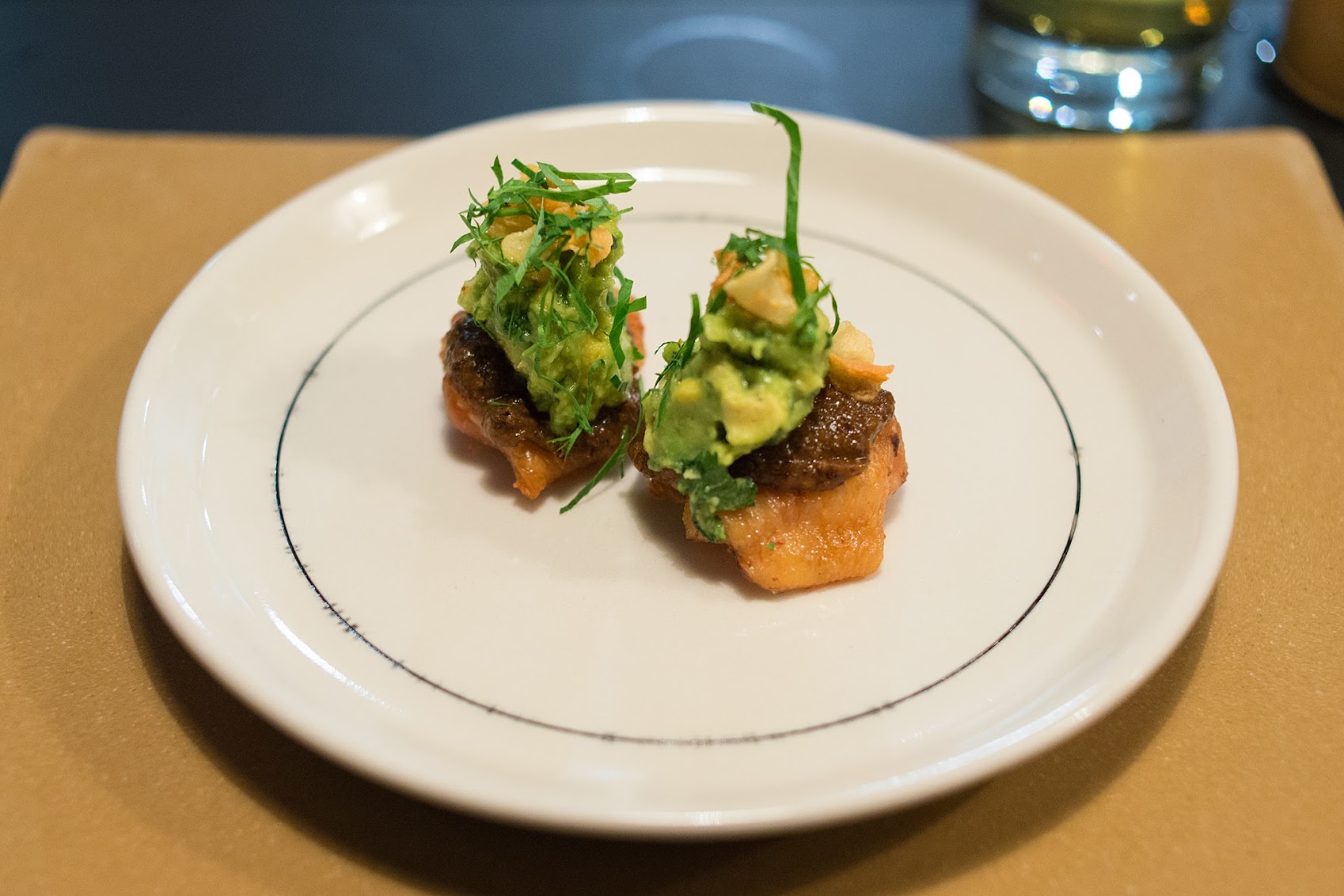 Roasted chicken wing
Salsa de chapulines, guacamole, fried garlic
It wouldn’t be a Mexican-inspired tasting menu if grasshoppers didn’t make an appearance, would it? Here, the insects were crushed and turned into a benign salsa. The deboned chicken wing was really good – I’m unclear on the seasoning, but the bite had a deep, earthy flavour. 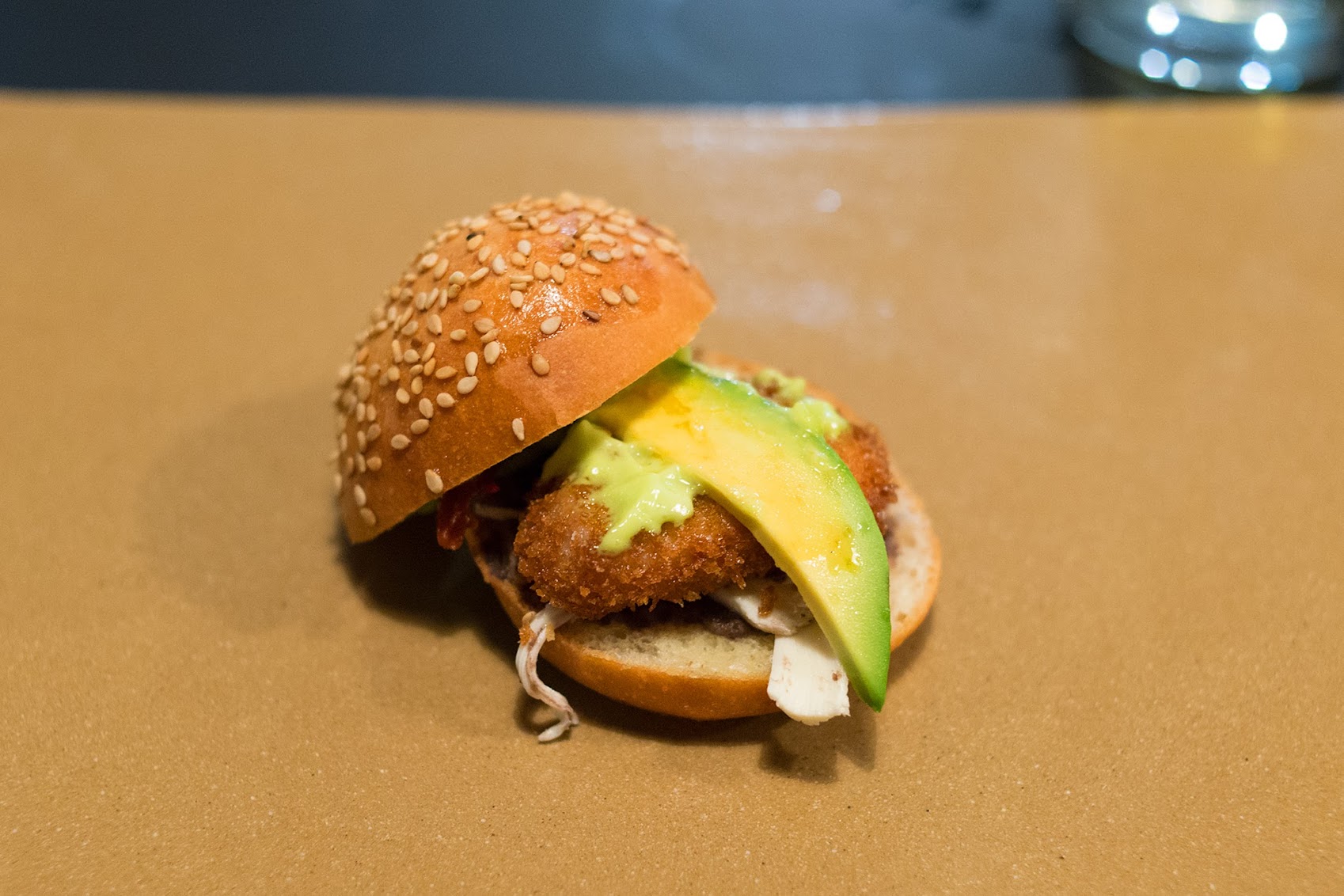 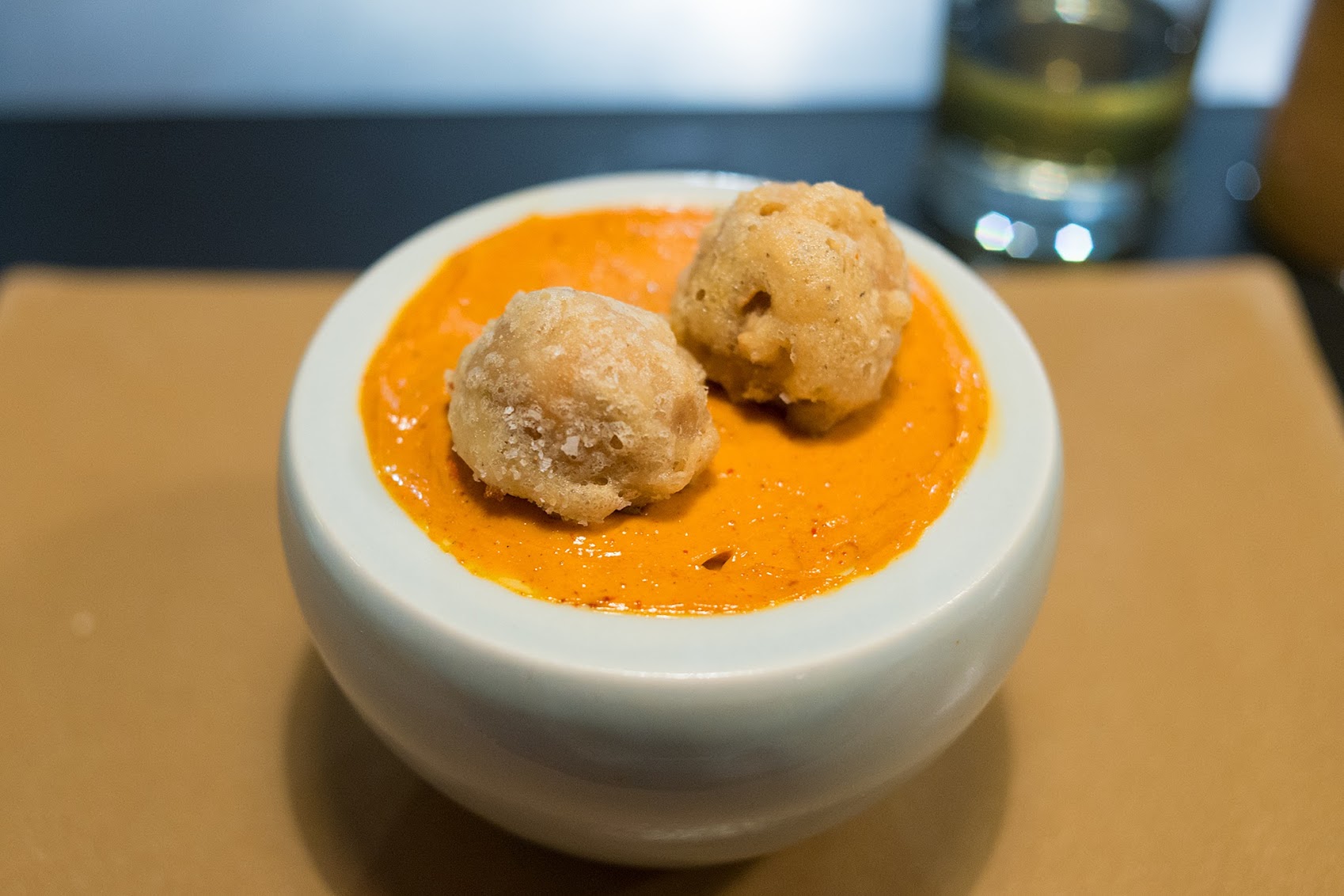 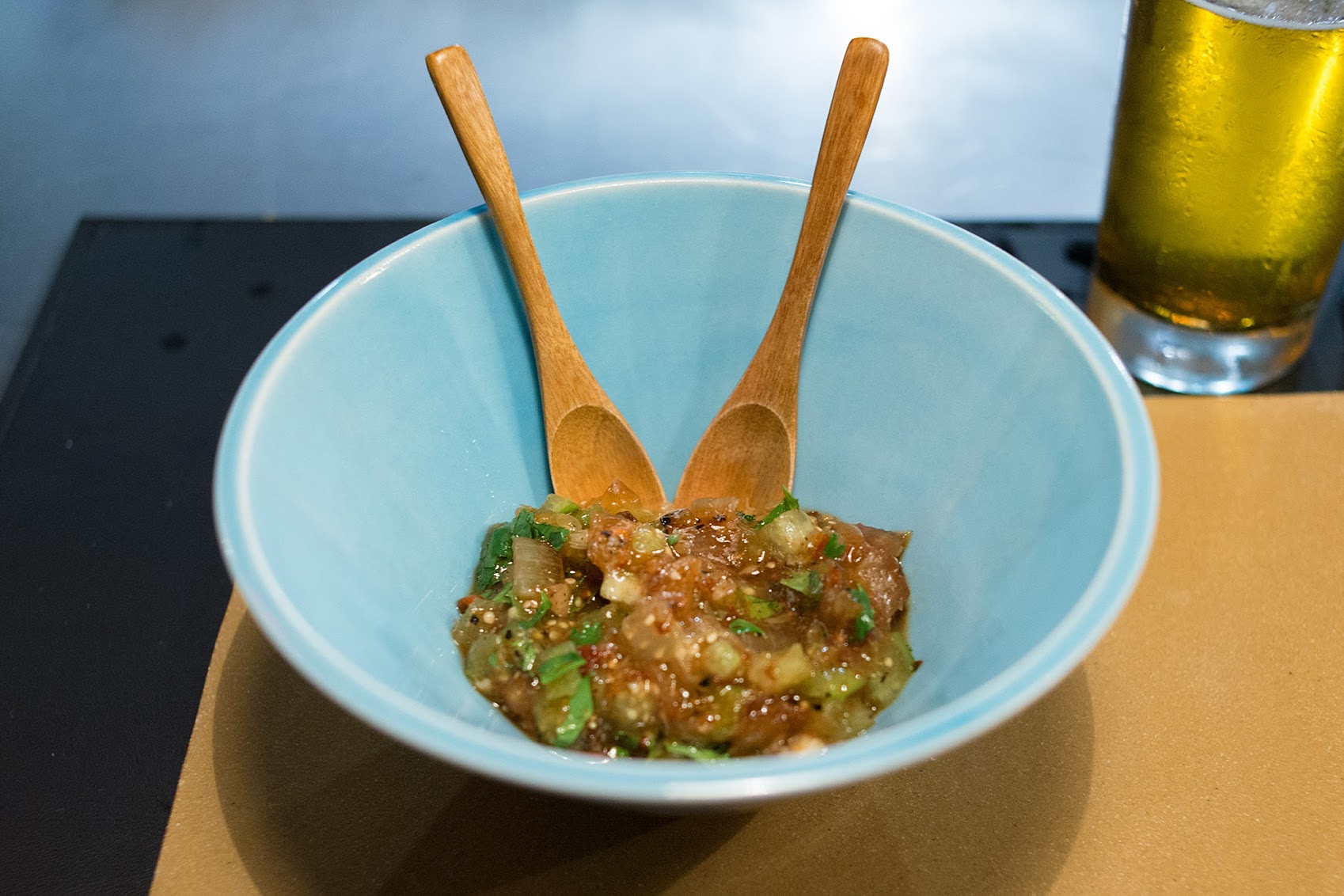 Table-side salsa
They brought out the biggest molcajete I’ve ever seen (at least 16 inches across) to make this salsa, the ingredients of which were selected by us. Our crowdsourced salsa contained roasted garlic and onion, roasted and raw tomatillo, roasted pasillas and habaneros, and a generous splash of lime juice. It turned out quite well – I particularly enjoyed the freshness from the raw tomatillos, which countered the roasty notes from the charred ingredients. 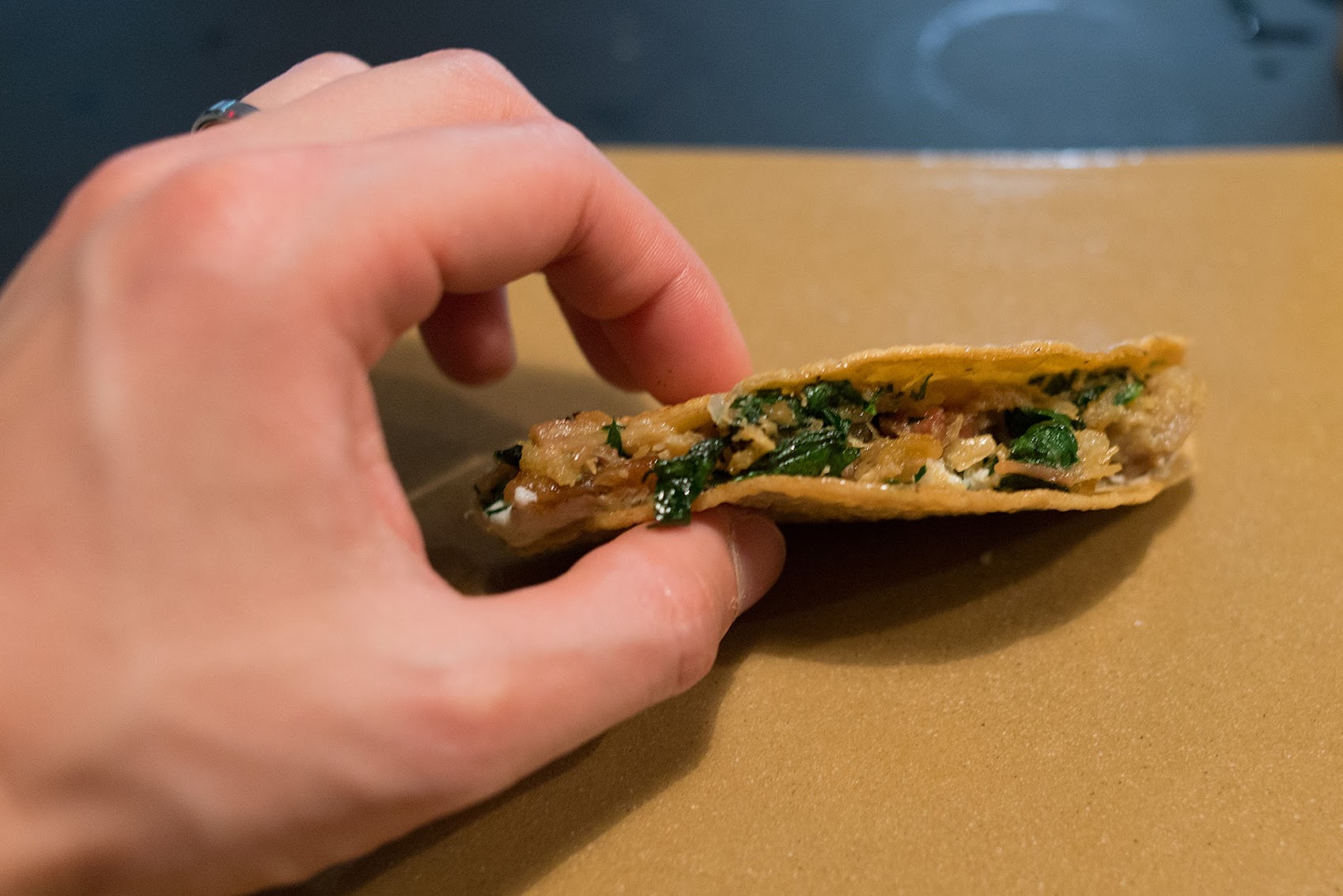 Quesadilla of chicharron and turnip greens 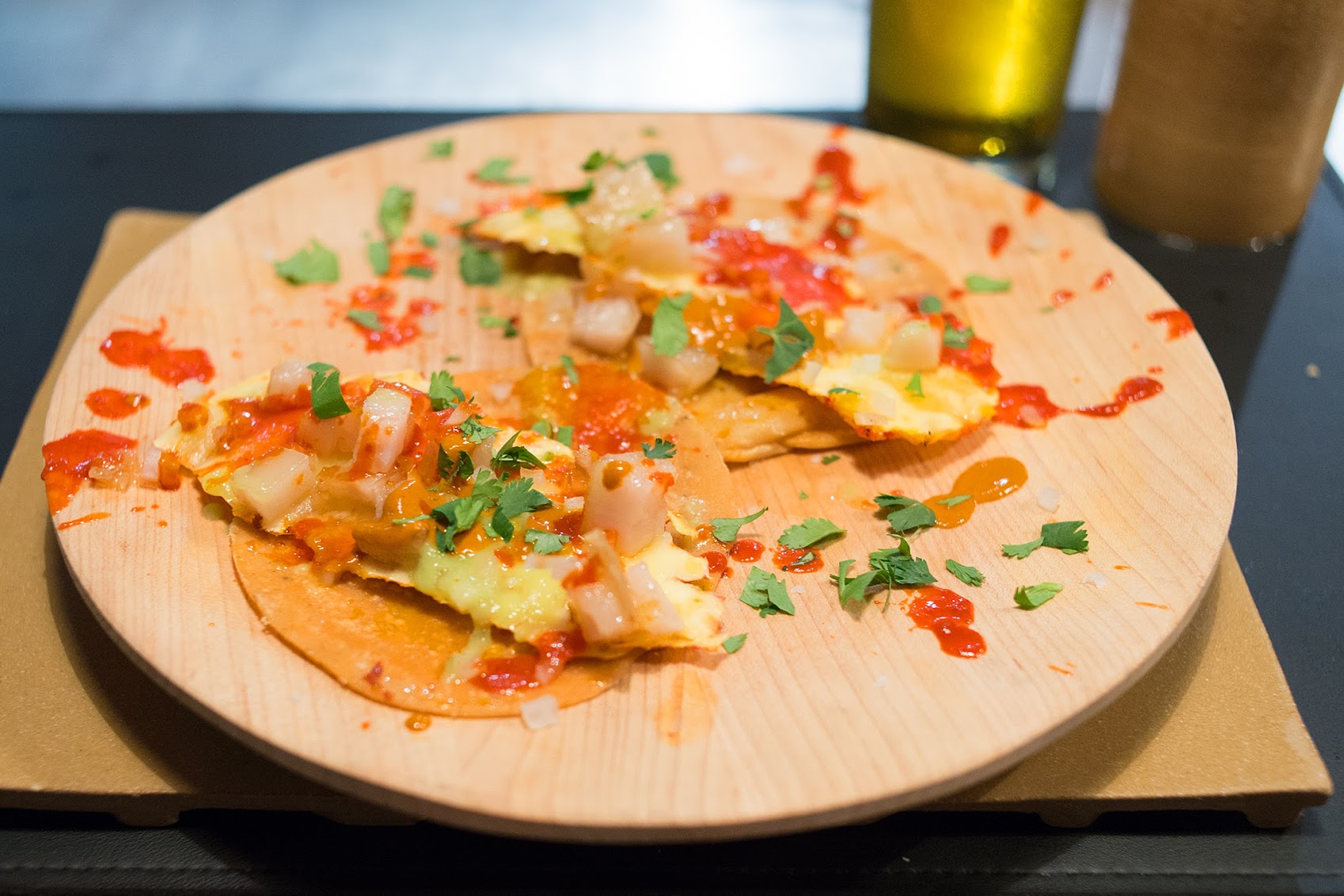 “Inverse al pastor”
Instead of the traditional pork, we had pineapple marinated in al pastor spices, which had been grilling in front of us the whole evening. This was sliced and topped with lardo, onions and a trifecta of salsas – the spicy chile de arbol salsa really brought out the sweetness of the fruit. An excellent take on a classic dish. 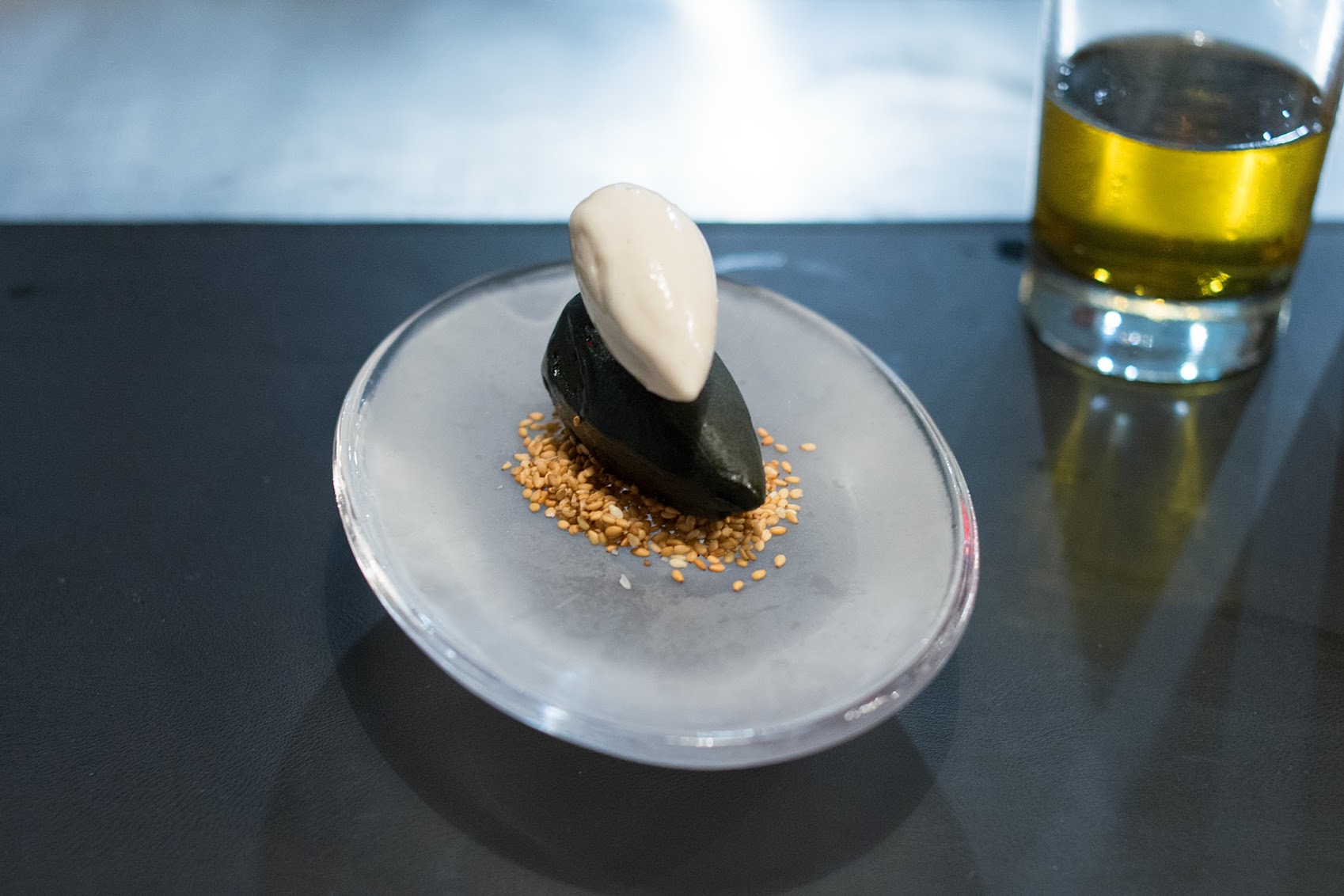 Mole negro and white sesame ice cream
Black mole is traditionally served with sesame – here, both were presented as ice creams. I usually enjoy savory ice creams, and this was no exception – the depth of flavour was impressive. 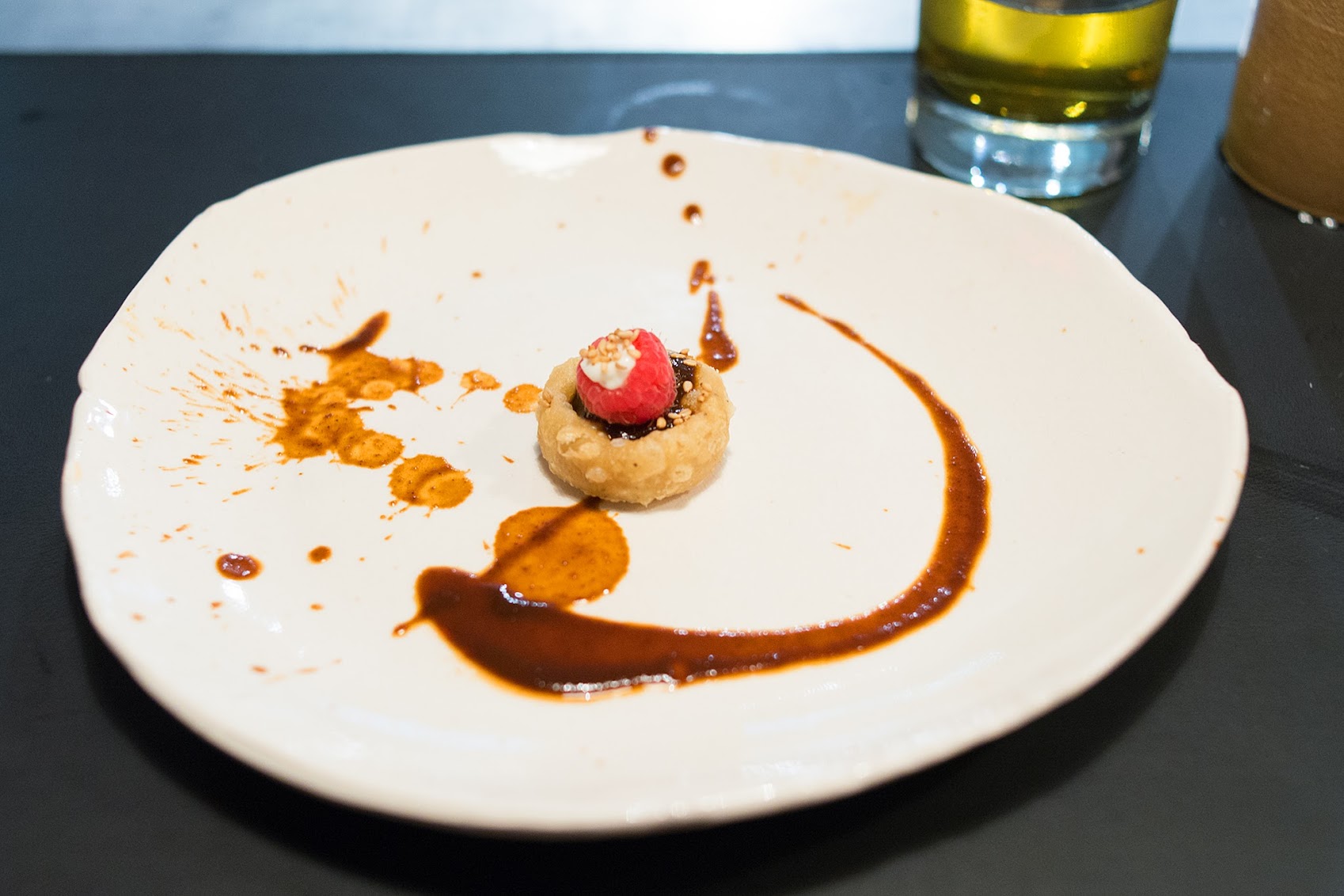 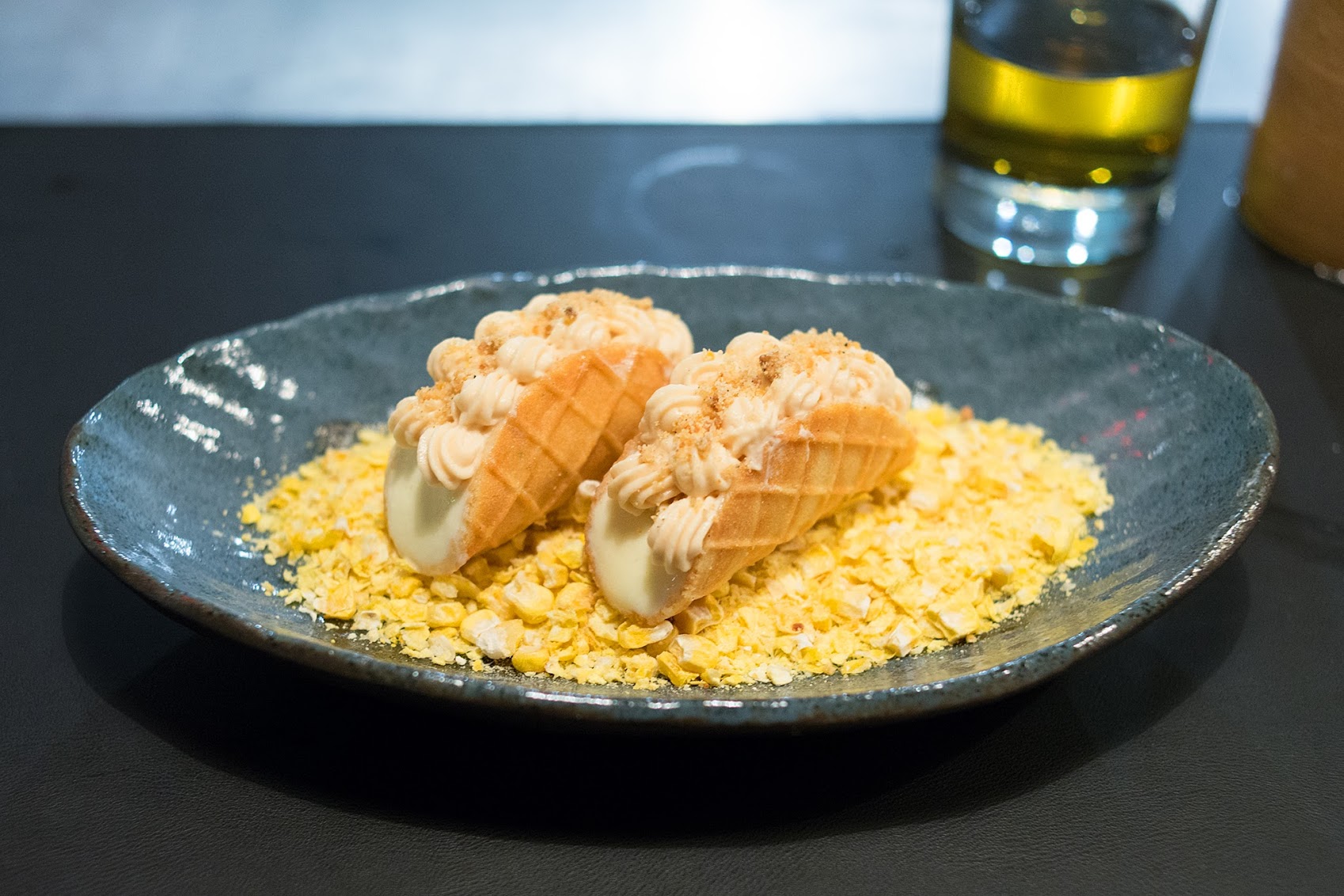 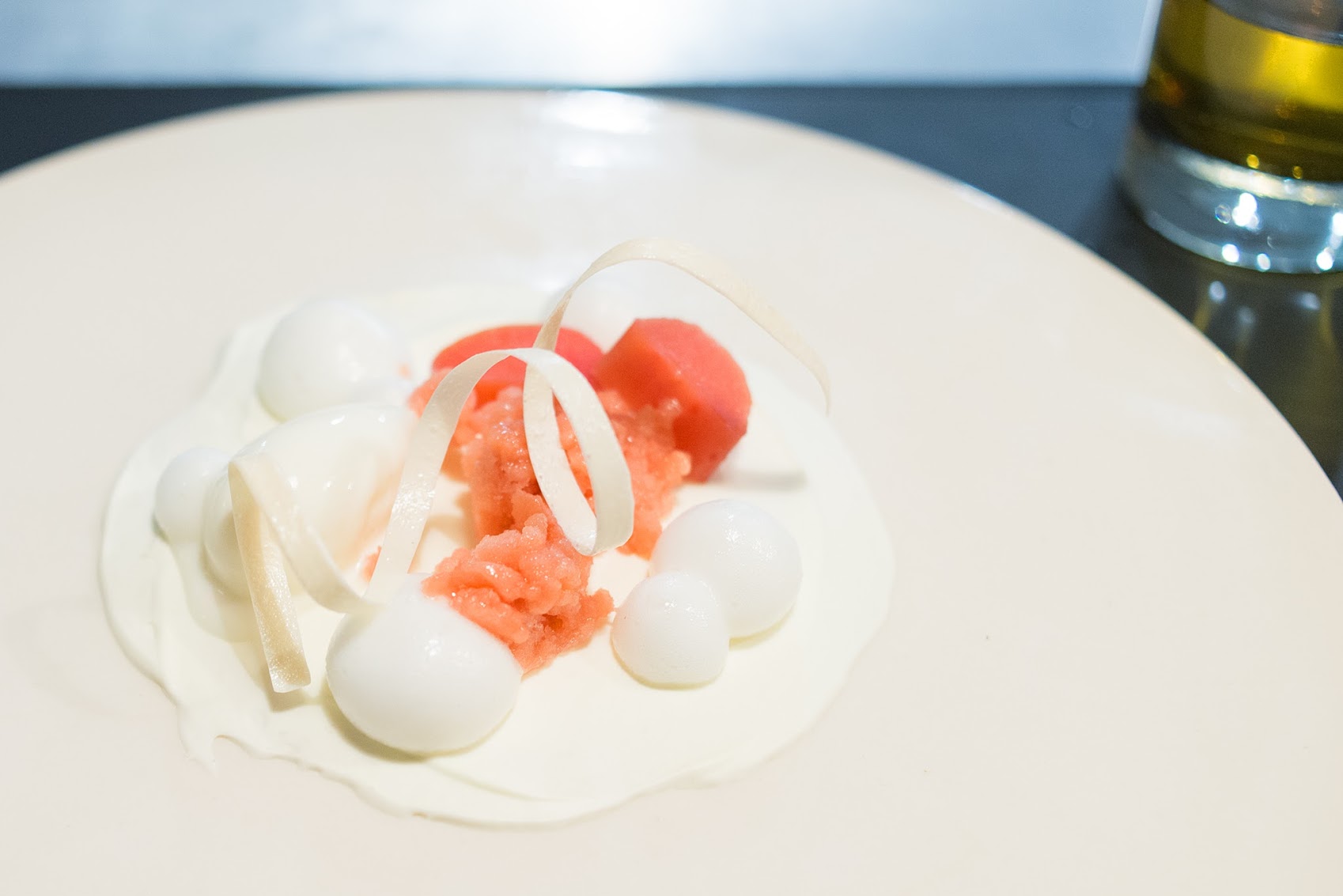 “Tres leches”
I have not enjoyed tres leches cake in the past, but this (less sweet) version was a winner. The interplay between the rhubarb, and different textures of goat’s and cow’s milks – fantastic! 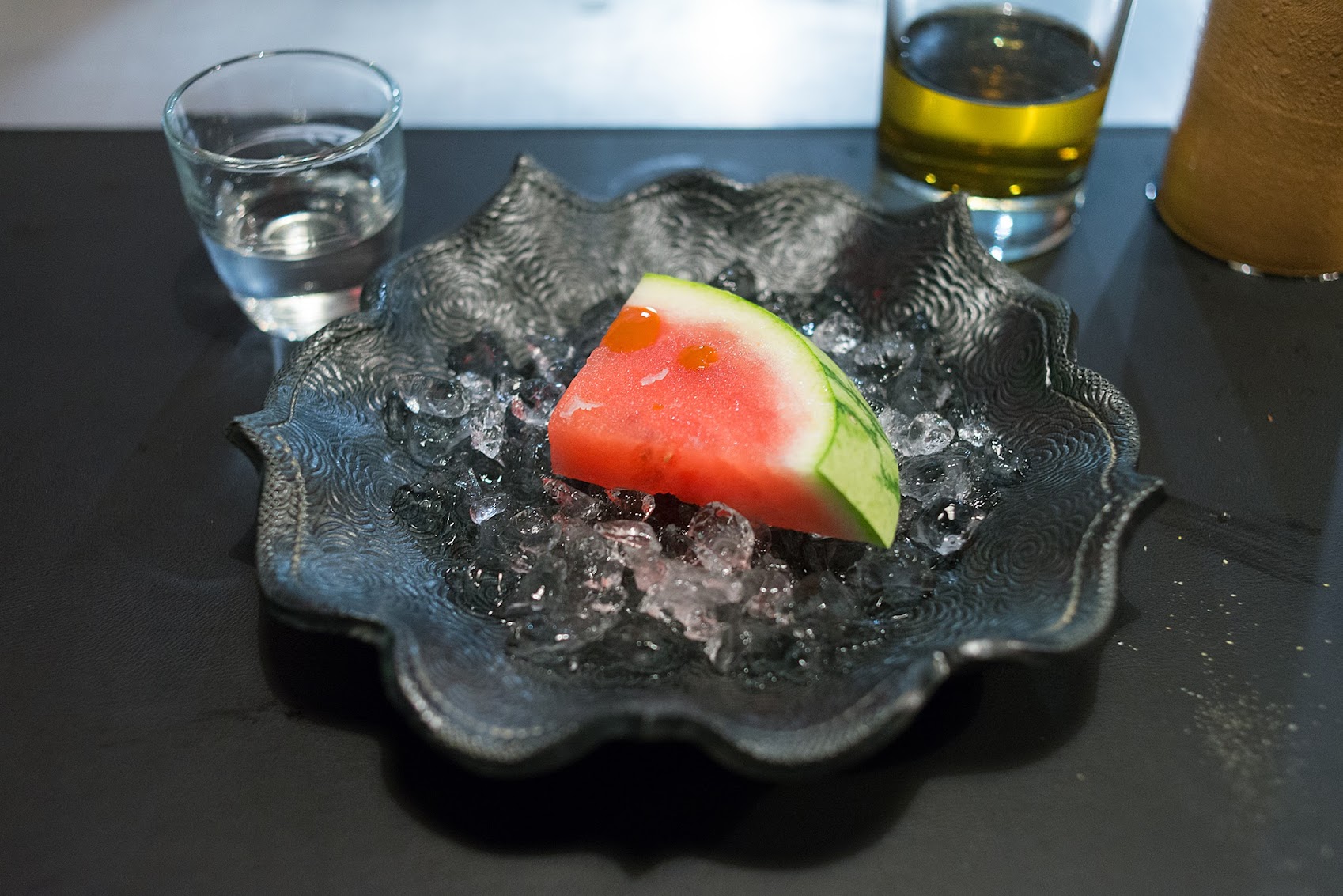 Watermelon, mezcal, hot sauce
What a way to end a meal – mezcal-infused watermelon doused in hot sauce, and a stiff shot of mezcal. Just the thing to perk you up before heading out into the night.

As with most menus this length, not every bite was successful, but boy, did we have fun – the closest analog I can come up with is Jose Andres’ minibar or é, albeit with less flash and (arguably) more cultural grounding. The smaller number of guests (i.e. just the four in our party) created a more intimate setting and lent itself to more informative conversations with the chefs – they are each impressive repositories of culinary esoterica in their own right. Next time, we’ll need to do the kitchen full justice and find the time to eat at Empellon proper.

2 thoughts on “The Kitchen Table at Empellon Cocina”