Corazon de Tierra just happened to be the “hotel restaurant” at the little 6-room inn we stayed at, La Villa del Valle, in the heart of the Valle de Guadalupe. The property is a bumpy 15-minute drive along a rough dirt road off the Mex-3 highway – not a ride I would recommended after twilight (good thing we were staying there!). The chef, Diego Hernandez, has been making waves off late – he is at the forefront of the new wave of young Mexican chefs. There is surprisingly little information about his restaurant online, so we were very curious about how our meal would fare. 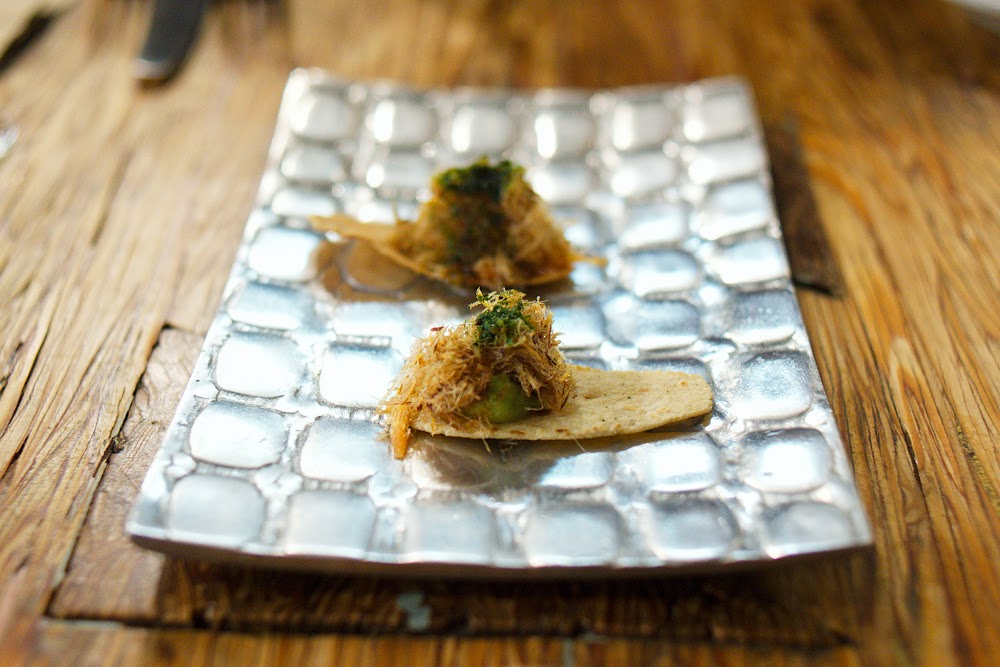 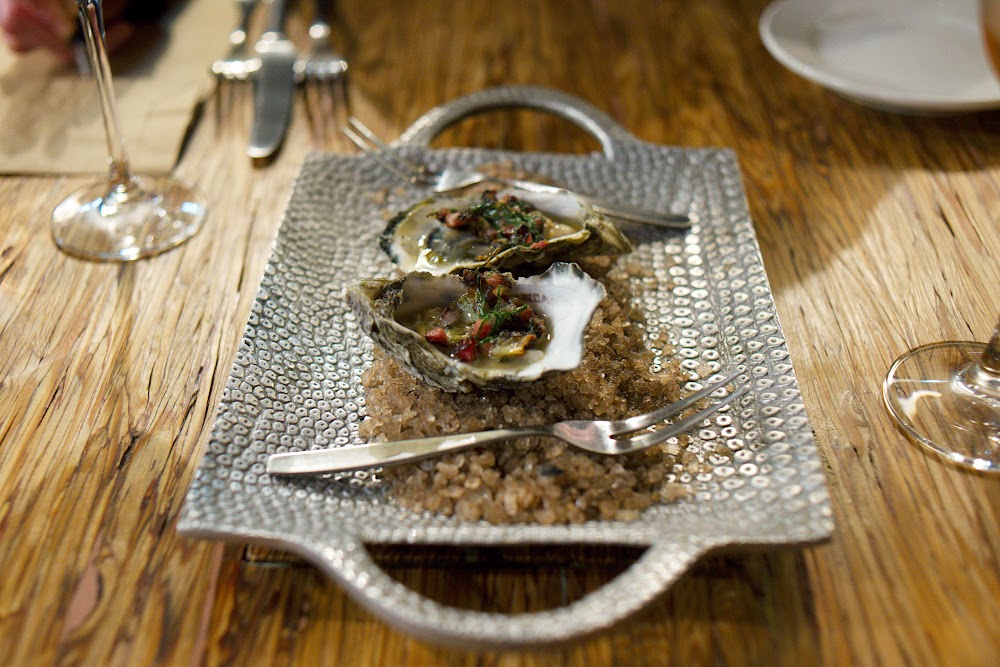 Kumiai oysters
Beet leaf, house-made bacon, queso cortes
Sort of a Mexican version of Oysters Rockefeller, with the cheese melted by a quick broil. The oyster was still fresh and plump – a mix of temperatures and textures here. 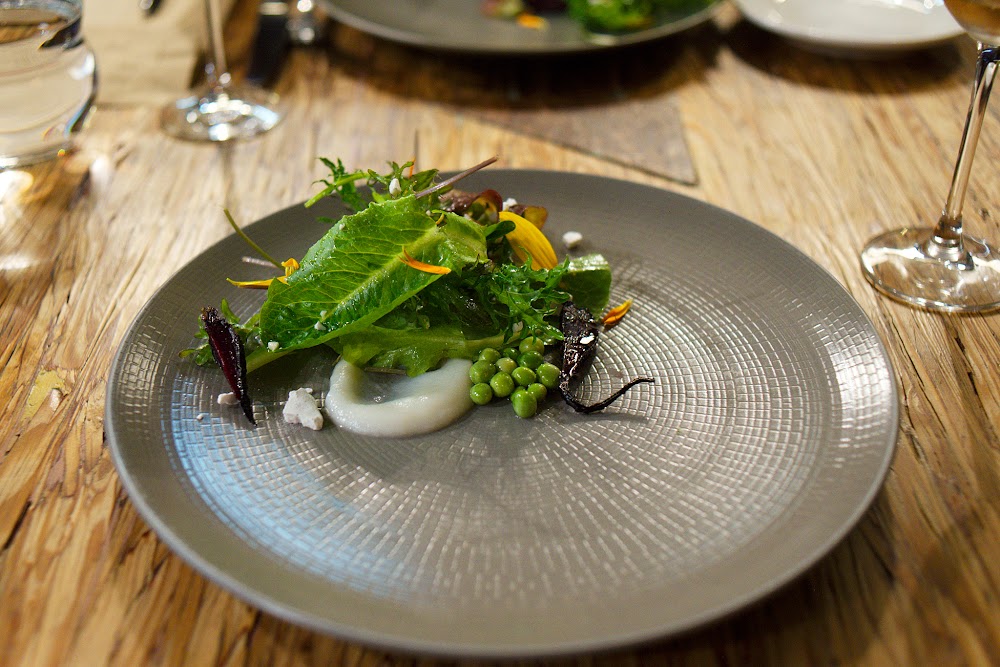 Garden salad
Greens from their garden, atop a purée of daikon – a fantastic combination! There were sunflower petals, wizened beets, fresh peas – all very, very good. The final touch was an airy basil meringue – just enough to balance the sweet beets and peas. 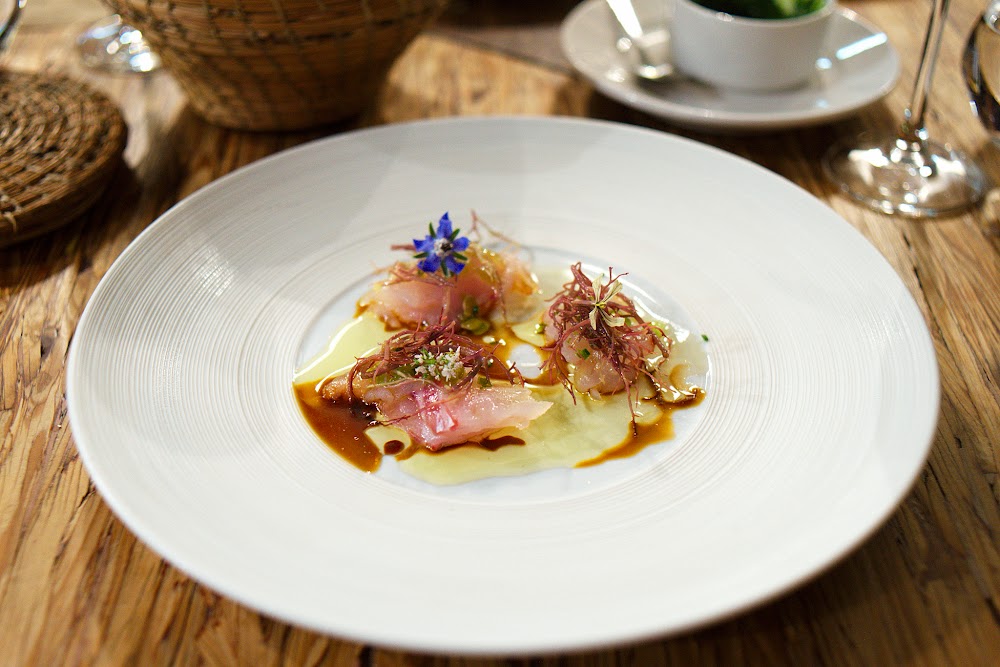 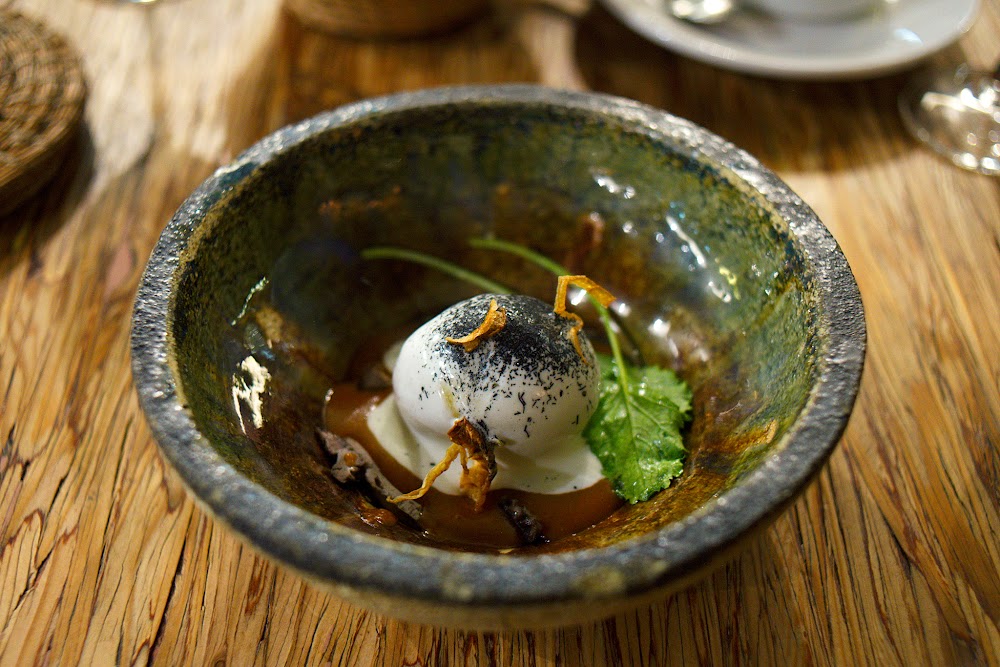 Tamale
Mole amarillo, crema, herb ash, smoked partridge
A moist tamal, enrobed in crema and set in a pool of yellow mole. Flakes of smoked partridge were deliciously gamey but unnecessary – the corn was that good. A sprinkling of dried parsnips for crunch – altogether a brilliant dish. 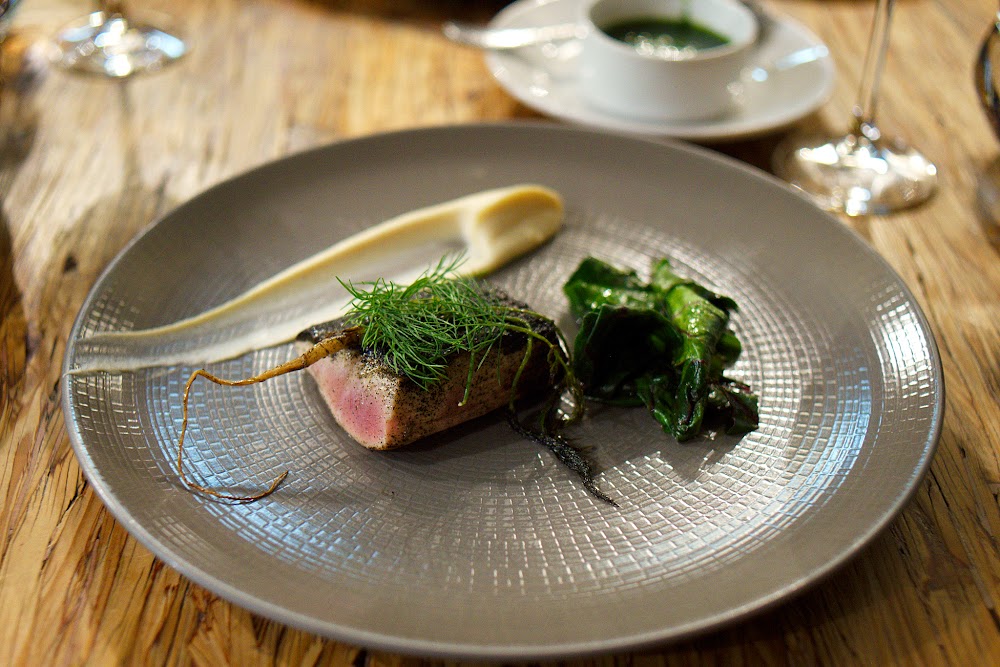 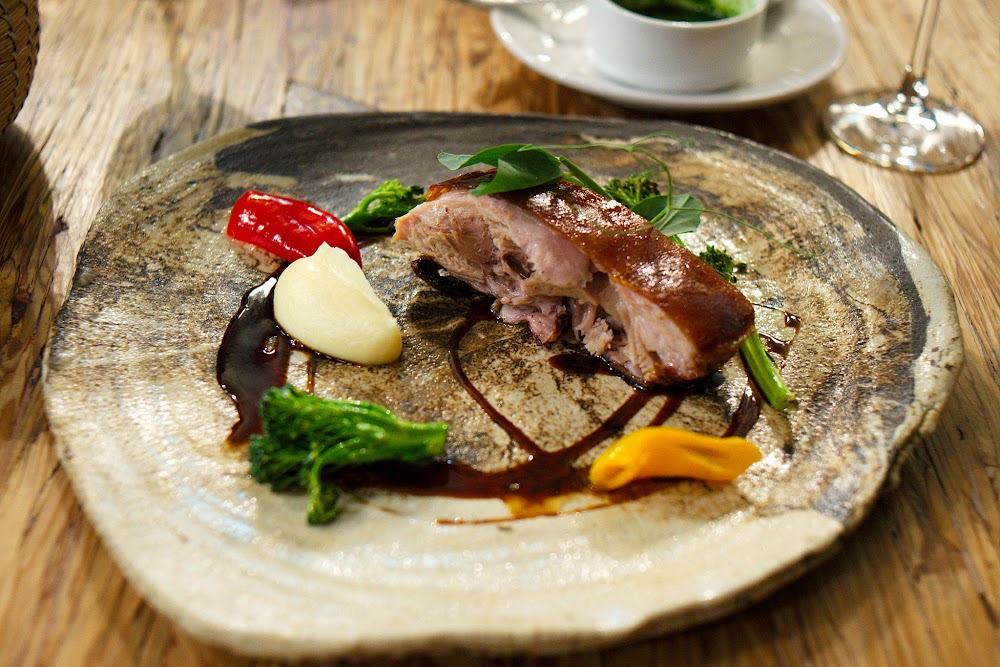 Suckling pig, parsnip, 3-year old sauce
Better even than the tamale – my favourite course of the night. Pig, slow-cooked, then blasted in a super-hot oven to crisp the skin – the crispiness was ridiculous. Served with mild padron peppers and a complex salty/sweet/sour 3-year old mother sauce (refreshed every service – reminiscent of Pujol’s mole madre, but even older!) 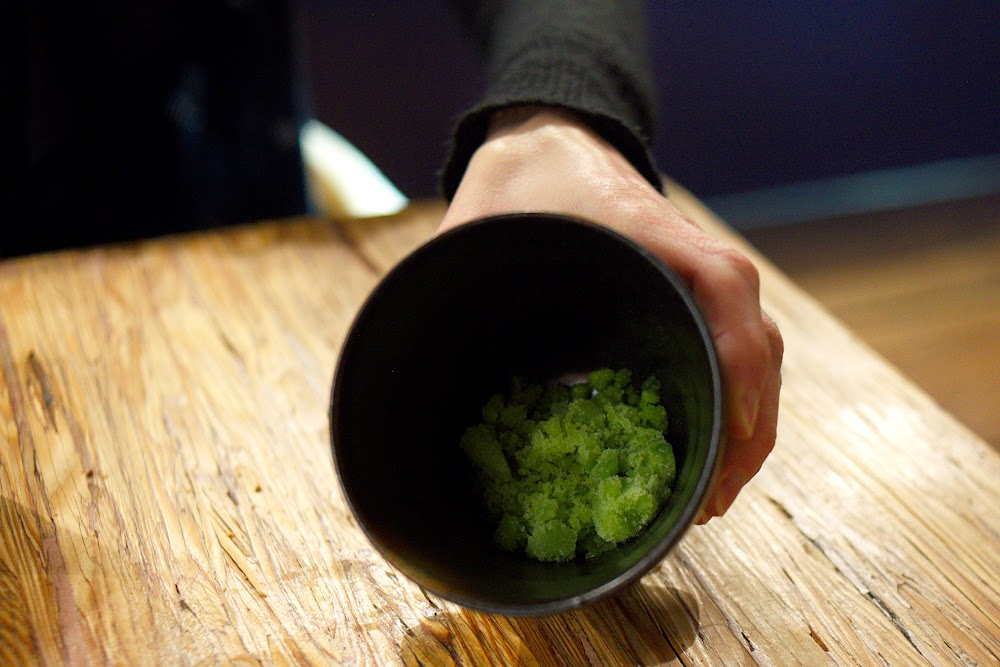 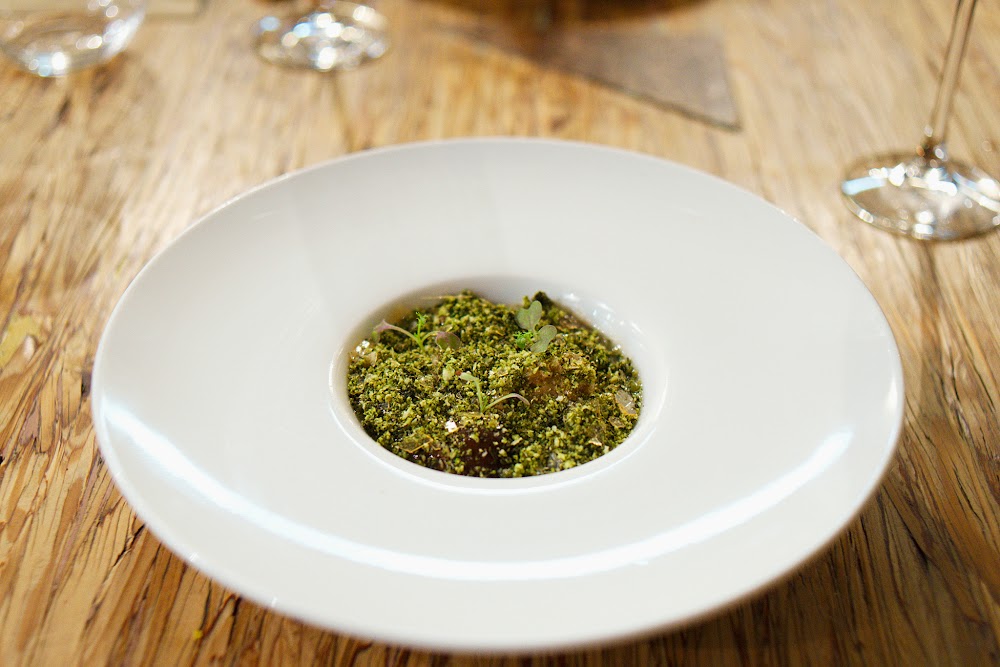 Dried herbs
Warm chocolate cream, stout beer cloud, cantaloupe soup
Described as “dirt from our garden”, this was a rather peculiar-tasting dish that really grew on us the more we ate. Dried herbs, anchored by a strong mint note, were somehow integrated into a chocolatey-boozy-melony base. Pulling this dessert together was no easy feat , I’m sure – quite a stroke of genius.

Suffice to say that this was a damn impressive meal. In some ways, it reminds me of its “chicano” cousin, Taco Maria, a few hours to the north – the proximity of the border, I suppose, shapes the cuisine. The restaurant was packed – the cat left the bag a long time ago. We’re a little late to the party, but it’s still going strong.

One thought on “Corazon de Tierra”